In last Sunday’s Premier League fixture, Manchester United beat Crystal Palace at Old Trafford – it was Ralf Rangnick’s first game in charge as the interim coach. After Michael Carrick passed on the team, the former RB Leipzig and Lokomotiv Moskva director did not even have full training sessions. Instead, he could only conduct video meetings to transmit his basic principles to the players. Intriguingly, the Red Devils were smart enough to execute some of the key concepts of his philosophy, which was demonstrated in this game.

This tactical analysis will give a detailed analysis on how Manchester United performed, and what was observed in this game.

Rangnick was clear about what he wanted from the team, hence, played with a 4-4-2 formation with some interesting selections. The midfield partnership he chose was Fred and Scott McTominay, which was almost perfect without possession on that day. Meanwhile, the four attackers chosen were Jadon Sancho, Bruno Fernandes, Marcus Rashford, and Cristiano Ronaldo, and Mason Greenwood and Donny van de Beek started on the bench.

Arsenal legend Patrick Vieira played his team in a 4-2-3-1, which was a variation from his usual 4-3-3 but did not matter greatly as the principles of plays were unchanged. Only two changes were made compared to the previous game, Nathaniel Clyne and Christian Benteke were the starters at the expense of Osdonne Édouard.

To further clarify the tactics of Rangnick, and how the team worked against the ball, the 4-4-2 should be regarded as a 4-2-2-2 as Sancho and Fernandes were numbers 10s instead of wingers. The defensive shapes also varied as sometimes they looked like a 4-2-4 or a 4-2-3-1, but clearly the principles were the same. We would explain the defensive progress of United in this section. 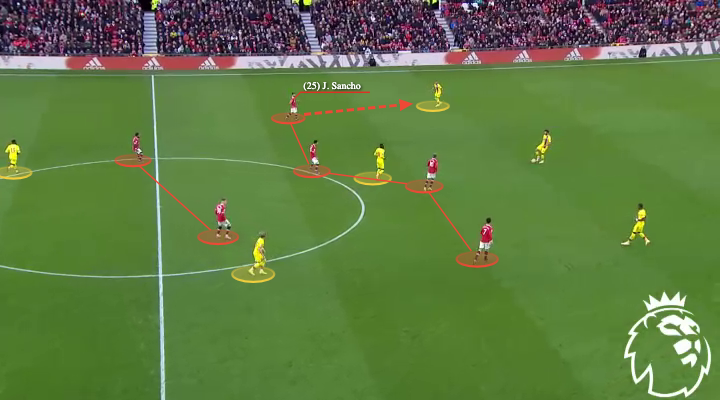 Firstly, we show the midblock shape of United in the image above. It was a 4-2-4 shape as either McTominay or Fred or both of them should be staying a bit deeper to provide the defensive cover. The intentions were very clearly, by no means should Palace play through or between them centrally. In this situation, Palace maintained a 4-3-3 shape with staggered midfield space occupation, but this did not stretch the defence as United also had five to six players in the centre.

The United players must stay at a group together in the centre to block that region, inviting the oppositions to go sideways. The lateral/diagonal pass would be the trigger to press, which the 10s should respond by jumping out from the half-spaces diagonally such as Sancho above. We will give more pressing analysis of United below. 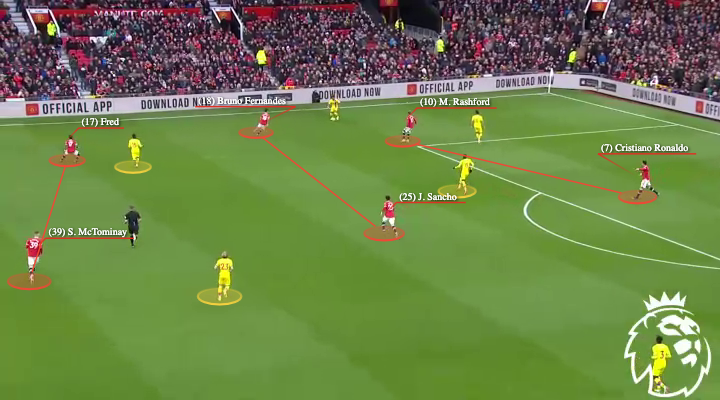 United were more aggressive against the ball, this was a great impact and the demand of Rangnick. Their PPDA: 7.57, was the lowest in all competitions since September. The engagement line was very high in this game and they never let Palace play easily. As drawn in the above image, they were usually in a 4-2-2-2 shape with two 6s and two 10s, it was important that Sancho and Fernandes must go in the centre to close the midfield instead of leaving themselves out wide.

The priority of the defence was to close the inside spaces, the Palace midfielders must not receive comfortably or even play passes forward in the centre. Therefore, the 10s must be dominating the half-space or covering the midfielder before jumping out to press in the wide zones. But when Fernandes went out to press on this occasion, the midfielders must be around the Palace midfielders. Of course, the tightness of marking was adaptable, Fred was closer to Jeffery Schlupp above as they were on the ball side, and McTominay can slightly be distant from Connor Gallagher as the Chelsea loanee was farther. 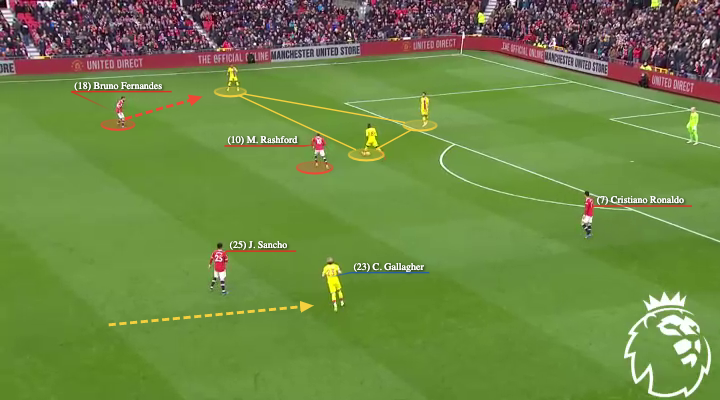 Rangnick’s side did not use man-marking, so they sometimes concede a player in the high pressing. For example, Cheikhou Kouyaté was there to form a 3v2 for Palace in the above image. All Rashford did was to make sure he could not pass forward, so Fernandes could see the square pass and jump onto the right-back. But the Red Devils could not stop the circulation of the ball as even the Portuguese international blocked Clyne’s angle to play forward, Palace kept the ball by going back to James Tomkins, United could not access the centre-back on time as this was a 2v3.

Again, you can see the impact of a 4-2-2-2 and how it coped with the dropping player in the opposition build-up. When Gallagher went deeper from a higher position, neither McTominay nor Fred followed, but leave it to Sancho. 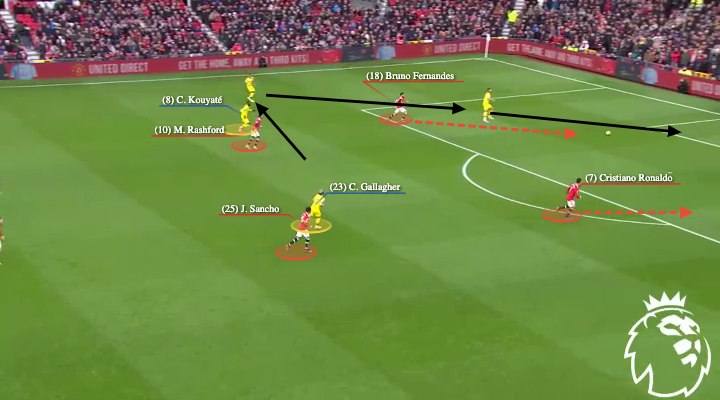 What differed from United was their continuous application of pressure. It was a backward pass to Tomkins, but it was also a trigger to press. Fernandes, who initiated the defensive action, must go all the way to press Tomkins, then to the goalkeeper to force them to play. Meanwhile, you could see how the entire team cooperated. As explained, both Palace midfielders must be closed (Kouyaté & Gallagher), so Sancho and Rashford were tightly marking them and Palace would not go into the centre. To apply continuous pressure on the opposition, Ronaldo was ready to go and press the left centre-back once Vicente Guaita made the lateral pass. Eventually, they forced a long ball and recovered with the defensive midfielders. 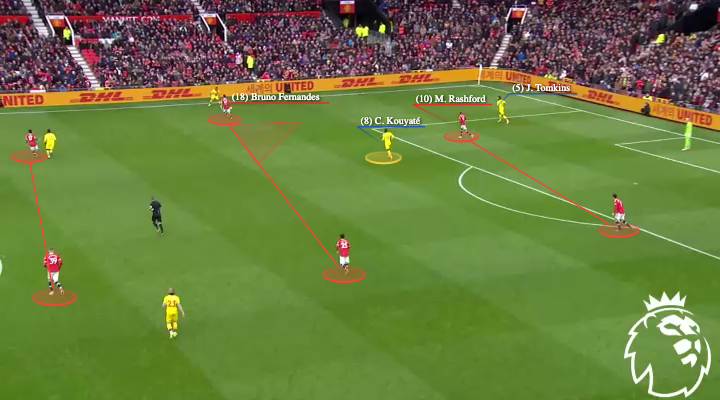 Rangnick was impressed by his players as some of them made clever decisions during the press. On this different occasion, it was also a 4-2-2-2 shape but the angel of the press was different, the Red Devils adapted. Here, when Rashford was pressing Tomkins, he left Kouyaté and the former West Ham United midfielder was between the lines. Hence, Fernandes’ angle of the press could not be the same as the previous example did. In this case, he needed to limit Clyne’s square pass, so the angle of approach was a bit lateral. Again, the 6s of a 4-2-2-2 were also covering, such as Fred was tightly marking Schlupp and McTominay was moving towards the centre. In this situation, they also forced the opposition to play it down the flanks as all central options were blocked. 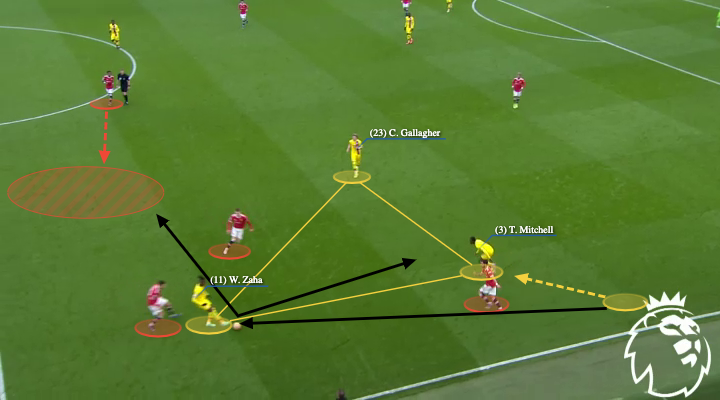 Since United were effectively blocking in the centre, Vieira’s troops mostly went out on the flank. This was the part where United had a small issue that could be improved via training sessions and familiarity with the tactics. Vieira instructed his front three to stay high and wide to pin the last line, and the United full-backs were also tightly marking the dropping wingers.

Usually, the issue was the follow-up action when the full-back escaped from the 10s’ press, how should the 10 react? For example, Tyrick Mitchell found Wilfried Zaha and made an innerlap, then United’s press was broken as Zaha could find Gallagher or release Mitchell. Of course, it did not turn into a catastrophic situation as Fred was ready to cover that space.

There were a few points United players must improve. If McTominay abandoned Gallagher and went for the ball, he must use that 2v1 with Diogo Dalot on Zaha, or the 10 (Fernandes) might need to track the full-back tighter after the first press was unsuccessful. Individually, Dalot must also improve his ability to defend spaces in front or cope with the dropping wingers. This was potentially a good side trap for United to recover possession in the future. 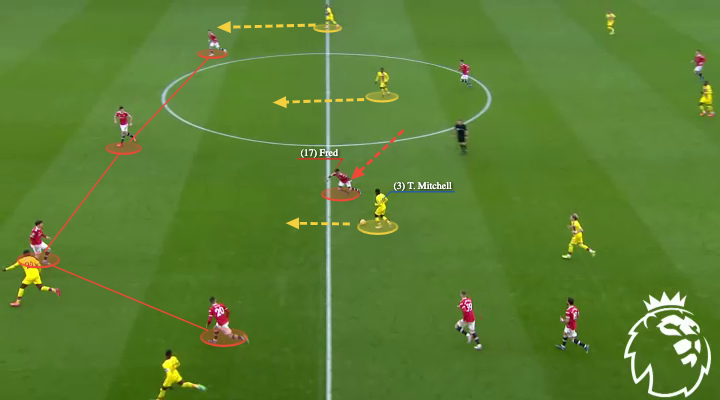 This is the image after Mitchell received the ball from Zaha, it shows the importance of Fred’s cover. The Brazilian midfielder was patient to delay and block the left foot of Mitchell, so the opposition could not go to the weaker side of United where two players were running into them. 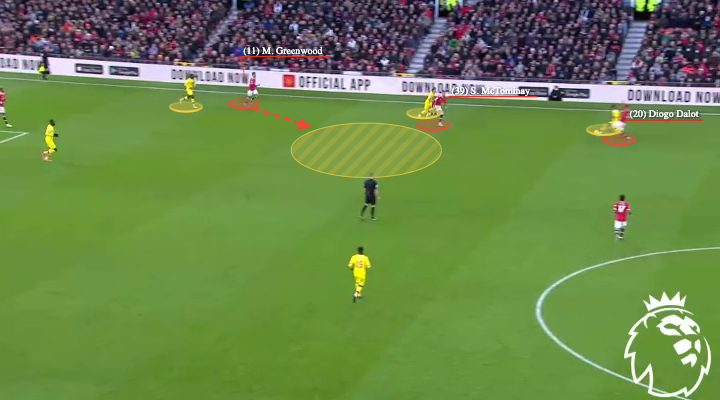 In the second half, they had another situation which was better in this regard. The situation was slightly different as Mitchell did not make the innerlap, but you could see how United made it a 3v3 as players were marking the respective targets, including McTominay on Gallagher. Meanwhile, Dalot was more aggressive on Zaha to force a loose touch, and Mason Greenwood dropped back to recover possession in yellow space was missing in the first half.

Offensively, United were not extremely fluid but they were more organized than the new coach. We would use the positions in a 4-2-2-2 as a reference to explain how the concepts and movements of players worked in these phases. 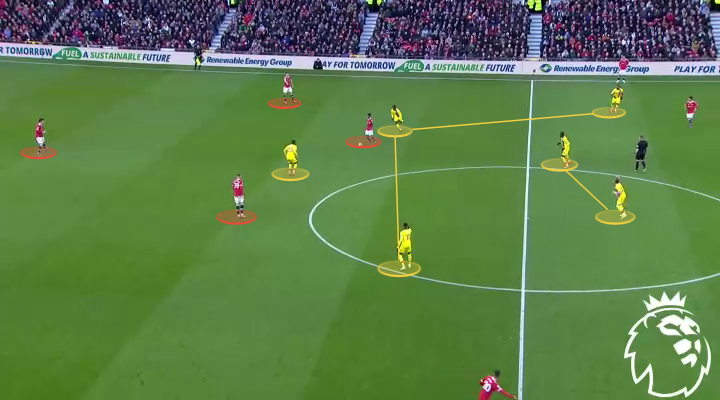 United played with a 2-2 shape in the centre, a wide full-back on the ball side and the narrow full-back on the far side to obtain the minimum width. They might intend to drag the Palace midfielders up with the deep 6s, but Vieira’s men were defending spaces centrally so Fred and McTominay had more spaces to operate. 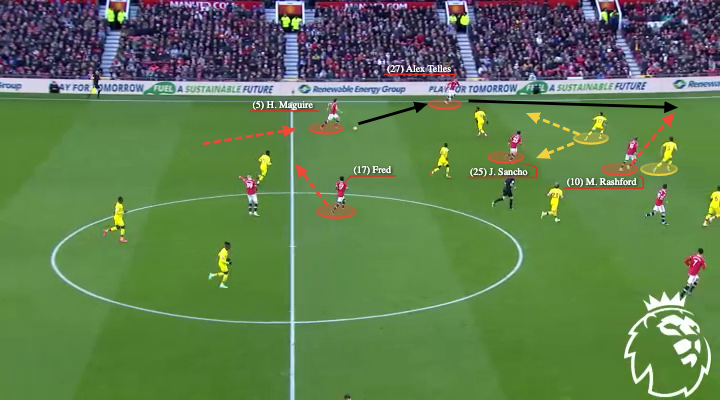 This was the structure we would like to highlight in United’s offensive game. In a 4-2-2-2, this would be the fundamentals of Rangnick’s system. His centre-backs should be brave to carry the ball forward, and he should be provided with the following options. The ball side full-back should stay in a higher position to offer a forward/diagonal option, also providing the width. Meanwhile, the 10s (e.g. Sancho) should stay in the half-space to maintain close proximity with the attackers. So, both Alex Telles and Sancho’s role was to drag the full-back out, opening spaces behind Clyne for Rashford to run into. Rangnick wanted to utilize the pace of the Englishman attacker to hunt the ball down. Also note that Fred should not be regarded as a viable passing option for Maguire, as Rangnick disliked square passes in the midfield. This is something the players must adapt under the interim coach.

However, there were also limitations at the moment. Since Maguire was a right-footed player, he rarely released Rashford directly as the pass was mostly inswing. So, the sequence was predictable as they’ll first find Telles, and use Telles to release Rashford. Probably the Red Devils needed a bit more dynamism. 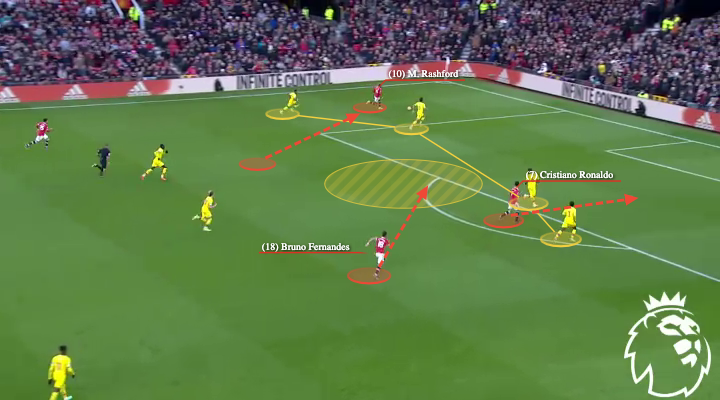 But this was still a good way to create opportunities in the final third. When Rashford sneaked behind Clyne, he could drag Tomkins out, so Ronaldo remained in a 1v1 against the other centre-back. In this example above, Rashford received behind and Ronaldo made the early run into the six-yard box, and you could see how the 10 (Fernandes) cleverly went in a reversed direction to exploit the gap between the centre-back. 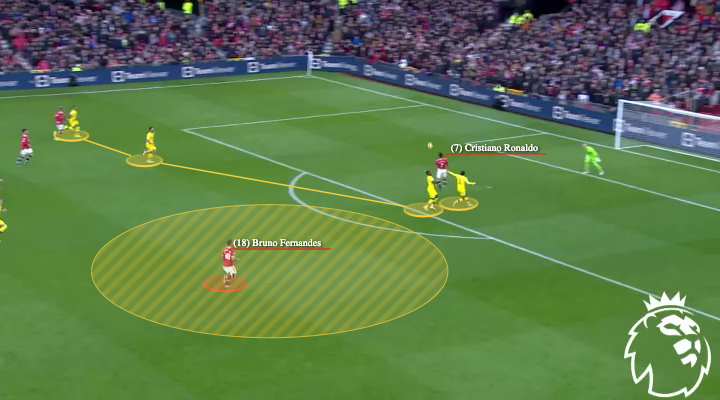 United were also more direct to cross early from deeper positions, the likes of Telles would find Ronaldo as a target, and this demonstrated the vertical and quick football of Rangnick. When they went forward in this pace, the ball was always faster than the player, and the United 10 could lurk in spaces in front of the last line to shoot. 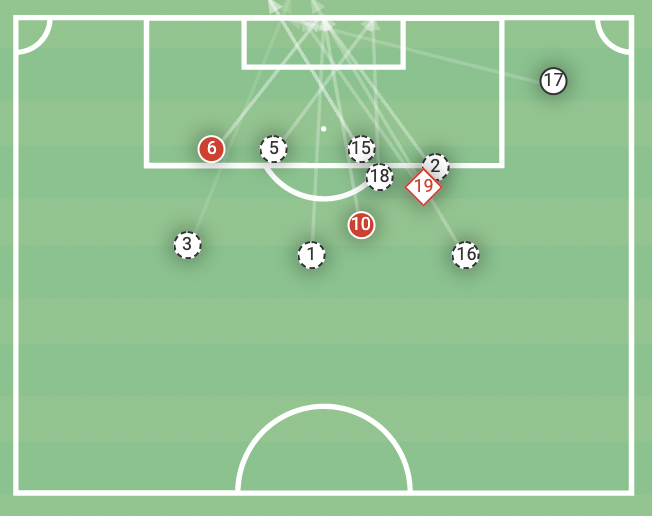 This is the shot graph of United (Cr. Wyscout). The Red Devils had 19 shots but only 16% of them were on target. The xG generated was 1.43, they deserved more than one goal but there were also room for improvement in terms of chance creation. They could get into the six-yard box more often to search for better chances.

It was a deserved victory for United as they had more shots, possession, and better intensity than Vieira’s men. The result was good, but as we have explained, there were plenty of details the Red Devils must improve if they need to transform into a consistent side to challenge the top three. Palace did not give enough tests so probably we would see more challenges in the future, though Rangnick should not be too worried about the situation as this was a talented squad.