Scotland’s Under-21 rounded off a disappointing European Under-21 Championships qualifying campaign with a 1-1 draw in Denmark last week.

In a match mostly dominated by the Danes, Scotland’s one piece of real quality was produced by Rangers’ Stephen Kelly who scored a sensational free-kick.

It was a moment to savour for Kelly at the start of what is likely to be a summer of uncertainty for the 22-year-old Rangers academy graduate.

About the final year of his contract, the central midfielder made a handful of appearances under Steven Gerrard but has found opportunities at Ibrox limited, spending the 2020/21 season on loan with Ross County and the second half of last season with Salford City in EFL League Two.

This tactical analysis scout report will be an analysis of Kelly’s playing style, looking at how he has performed in those loan spells and assessing his chances of securing a place in Giovanni Van Bronckhorst’s tactics next season.

Kelly is a right-footed central midfielder, most often deployed in a box-to-box role or deeper as a ‘6’, as we can see in his heatmap for last season at Salford City. Here, he was used either in the double pivot of their 4-2-3-1 or as a CM in their 4-4-2. 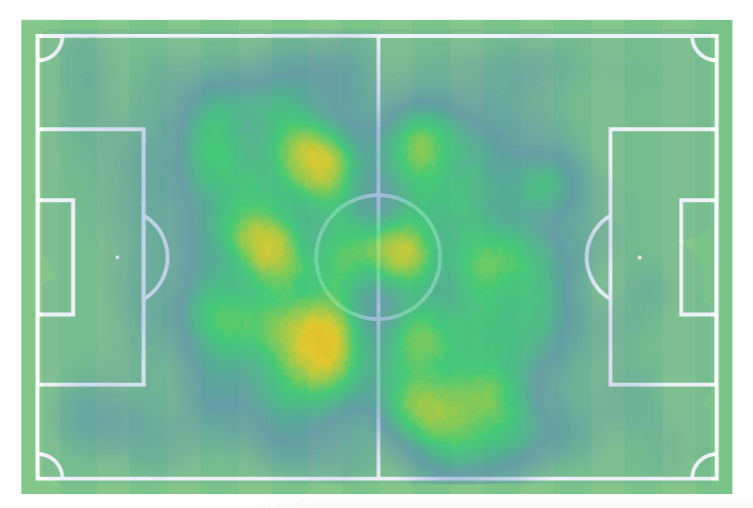 At 176cm and 68kg, Kelly is not the most imposing of central midfielders. However, he is adept at using his technical abilities to negate his slight frame, as we will see later in this analysis.

Looking at his pizza chart from his loan spell with Salford City and Ross County, which uses Wyscout data converted into percentile ranks to compare him with other central midfielders (min 1,000 minutes played) in those leagues at the time, we can start to build a clearer picture of the type of player Kelly is. 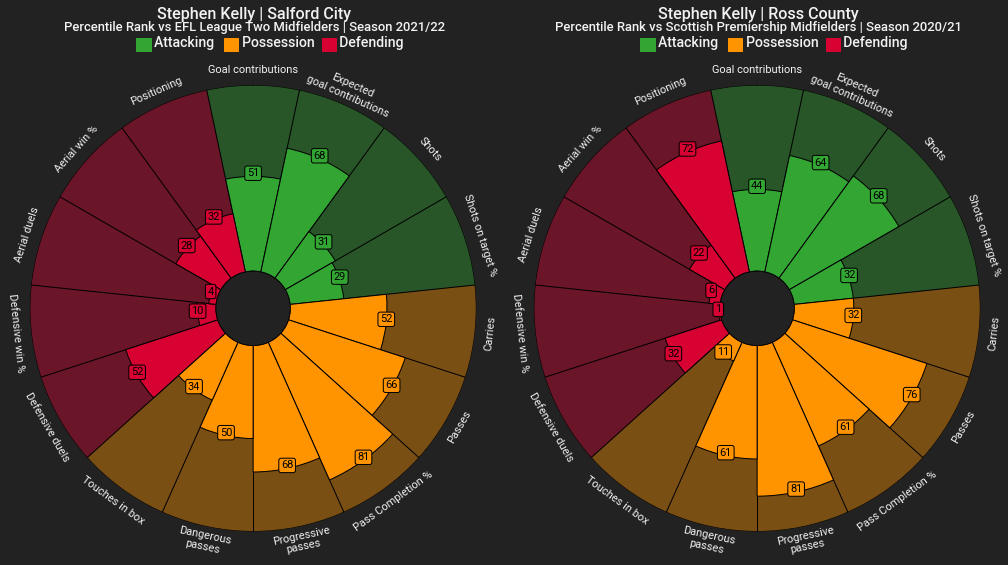 Although with two different teams, in two different leagues, Kelly played a similar number of league minutes (1,581 at Salford and 1,256 at County) in central midfield roles at both and we can see some patterns coming through in his style of play.

Much of his expected goal contributions came from set-piece situations rather than open-play as he has been a primary taker of both corner kicks and free kicks at both clubs. We can see this in the below graphic which shows his shot assists (the last action of a player before a teammate has a shot) from the last calendar year.

Looking at the possession section of the pizza chart, Kelly produced more carries (a combination of dribbles per 90 and progressive runs per 90) at Salford than at County, this may be down to systems too but looking at his high ranks for progressive passes at both, it is clear those are how Kelly progresses the ball rather than through carries.

He had an above-average number of passes overall in both spells, with an improved rank for his completion percentage at Salford. Again, this could be system-related in that he attempted slightly more progressive and dangerous passes (a combination of key passes per 90 and through passes per 90) at County. Either way, his passing numbers were impressive enough in both spells.

Defensively, he had a high positioning rank (a combination of PAdj Interceptions per 90 and shots blocked per 90) at Ross County. Other than that, his defensive numbers are not so strong, indicating his strength is more as a creator.

As we have just seen in his data, one of Kelly’s biggest strengths is his passing. With a pass completion percentage of 82.02% for his average of 37.86 passes per 90 last season at Salford, Kelly is secure enough in possession.

He has good technique and is well-balanced. Comfortable on the ball, Kelly has a nice range of passing and is capable of breaking lines (he averaged 6.4 progressive passes per 90 with Salford) to create opportunities for his teammates in the final third. 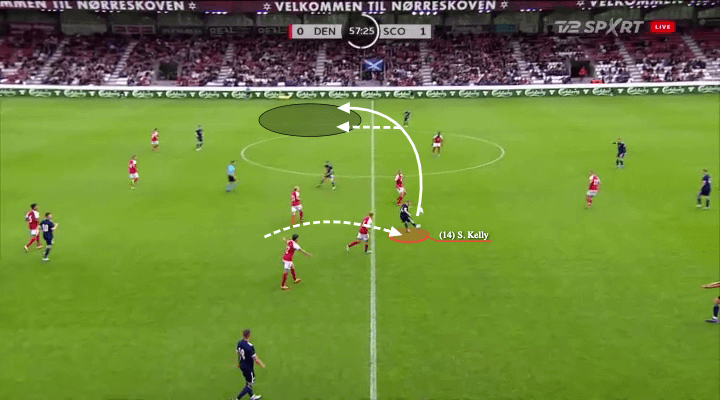 Here, we see an example of Kelly’s range of passing in the recent European Under-21 Championship qualifier against Denmark. In this passage of play Kelly shows good balance to evade a challenge after receiving the ball from a Scotland throw, he then attempts to carry but finds his path blocked off. He shows excellent close control to change the point of attack with an accurate switch out to the Scotland wing-back who can control and then attack the space out wide. 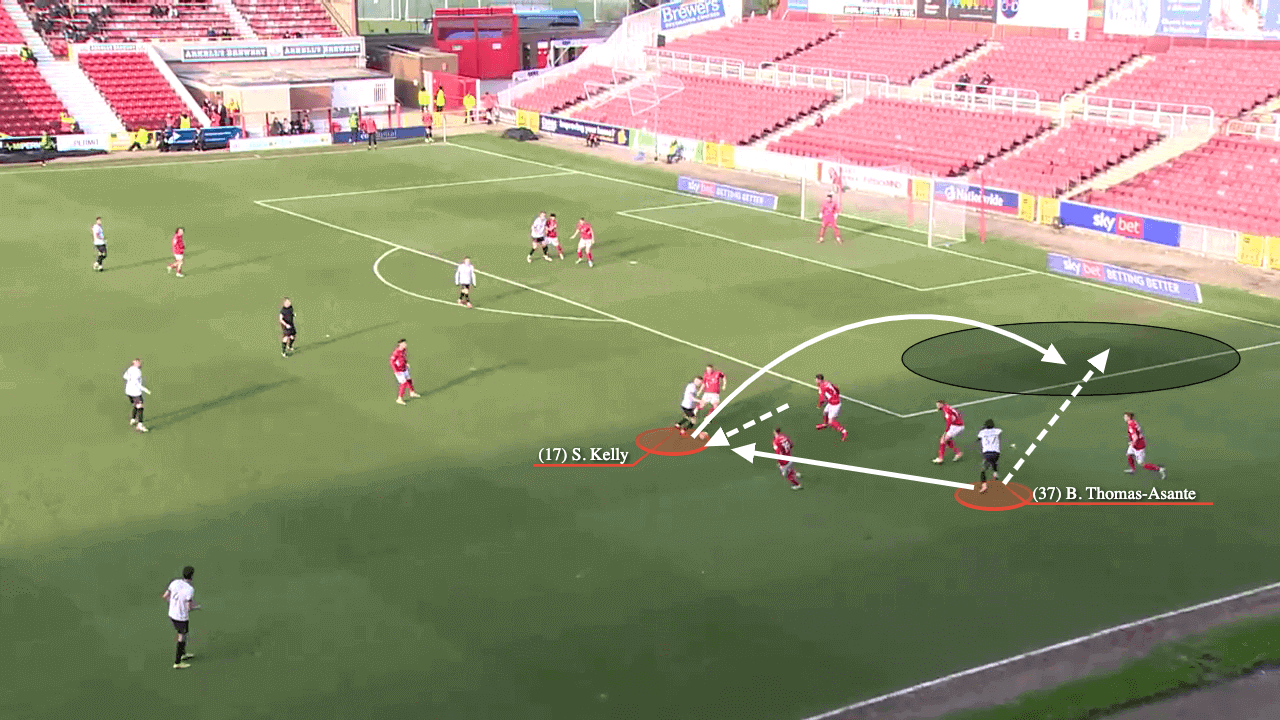 In this next example, we see another type of pass Kelly has in his locker. Away at Swindon Town, Kelly firstly shows good off-the-ball movement, making an initial darting run as if to go in behind but then quickly drops to offer an option for the pass inside from his teammate Thomas-Asante. Once he receives it, he shows soft feet, quickly taking a touch with his left to control, then another quick one with his right to evade the defender and set himself, before lifting a pass through several opposition players and into the path of the onrushing Thomas-Asante for a crossing opportunity.

Another strong part of Kelly’s game is his quality from set-pieces. As mentioned in the introduction, he showed his prowess from direct free-kicks just last week for the Scotland Under-21s but Kelly is more often able to provide good goal-scoring opportunities for others from his corner-kicks or free-kicks from distance. 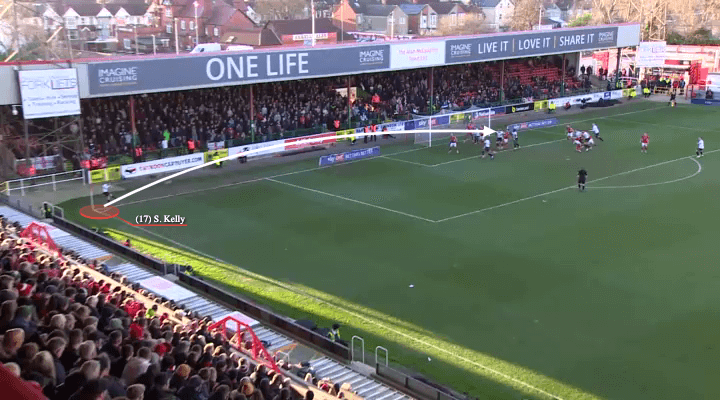 Using his excellent technical ability, Kelly puts good pace on his dead ball deliveries which makes it difficult for goalkeepers to come and claim, as we can see in this example. Here Kelly is taking an inswinging corner for Salford away at Swindon Town. His delivery is flat and pacy, bending over the goalkeeper, who has also been blocked off in the box, towards the back of the six-yard box for Salford teammate Ryan Watson to head home. 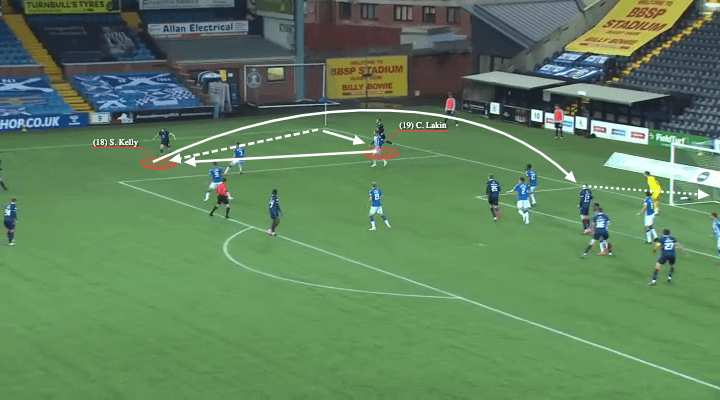 In the next still, we see another example of Kelly’s quality from set-pieces. This time from his loan spell at Ross County where Kelly plays a key role in executing a smart short corner-kick routine.

He plays the ball short to his teammate Charlie Lakin, before moving out to create a better angle for the delivery into the box. He receives the return ball from Lakin and shapes the ball in with good pace, picking out Tom Grivosti who scores with a header.

As we have seen in his pizza charts, Kelly is not that successful in duels, ranking in the bottom 25th percentile for defensive duel successes and aerial duel successes at both Salford and County, with his slight frame meaning he can be outmuscled by more physical opponents.

However, he still has something to offer off the ball. With a good burst of pace and mobility to get around the pitch, Kelly can be an effective presser.

Despite his positioning (a combination of PAdj Interceptions per 90 and shots blocked per 90) percentile rank not being as high for Salford as it was at County (again, potentially down to systems), he was still particularly good at recovering the ball in the final third during his spell at the Peninsula Stadium, as we can see in the below graphic.

Mostly performed in the central area just inside the opposition half, we can see he averaged 1.72 recoveries in the final third and, more impressively, an average of 0.78 dangerous recoveries per 90. On two occasions, his recoveries also lead to a goal.

Here, we can see an example of recovering the ball in the final third away at Oldham Athletic last season. In a high starting position, he gets his body in well, using his right foot to cover the space that the opponent is looking to carry into. He plants his foot quickly and steals the ball which then runs to his teammate who can pick up possession on the edge of the box. 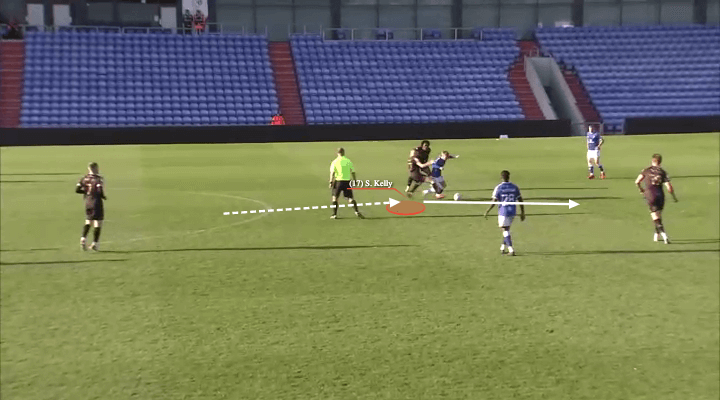 Here we can see an example of recovering the ball in the final third away at Oldham Athletic last season. In a high starting position, he gets his body in well, using his right foot to cover the space that the opponent is looking to carry into. He plants his foot quickly and steals the ball which then runs to his teammate who can pick up possession on the edge of the box. 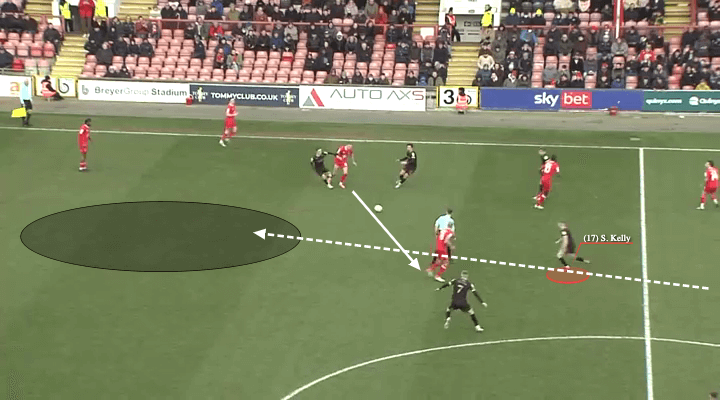 In this next example, we can see Kelly recovering the ball just inside the final third in a league game at Leyton Orient. Here, he has spotted the pass inside and is quick across the ground to intercept it before driving into space to play in a teammate for a shot at goal.

Kelly has had two productive loan spells in the last two seasons which have certainly aided his development. However, if his long-term future is to be at Rangers then he will have to impress during pre-season this summer, particularly with Rangers’ current strength and depth in the position.

If it is not to be for him at Rangers though, there will likely be a queue of clubs at the Scottish Premiership and EFL League One/League Two level who will be interested in securing the services of a central midfielder who has a lot to offer.