EURO 2020 Preview: How can Italy stop Austria’s dangerous attacks and break their defence in the Round of 16 – tactical analysis

Italy will be facing Austria on June 26 at Wembley Stadium in the Round of 16 at EURO 2020. The game will surely be an intense one since both teams will strive towards a quarter-finals’ qualification. And the fact that the game will be played at a neutral stadium and country will make it even more challenging as neither team will have an additional advantage.

In this tactical analysis preview we will study both teams’ possible formations and line-ups while exploring how can Italy stop Austria’s attacks and how to be efficient upfront. This will be done by also looking at the strengths and weaknesses of Austria to provide readers with a meticulous overview of both teams’ tactics prior to the game.

For this EURO 2020’s Round of 16, Roberto Mancini will most probably be relying on the same formation and players that he used for the first two games of the tournament. Resting the majority of these players for the match against Wales supports this idea since Mancini wanted to keep his main starting players fresh for this knockout phase given that they have already secured the qualification since the second match. Only few changes will be made for this match due to the injury of Giorgio Chiellini and the comeback of Marco Verratti. 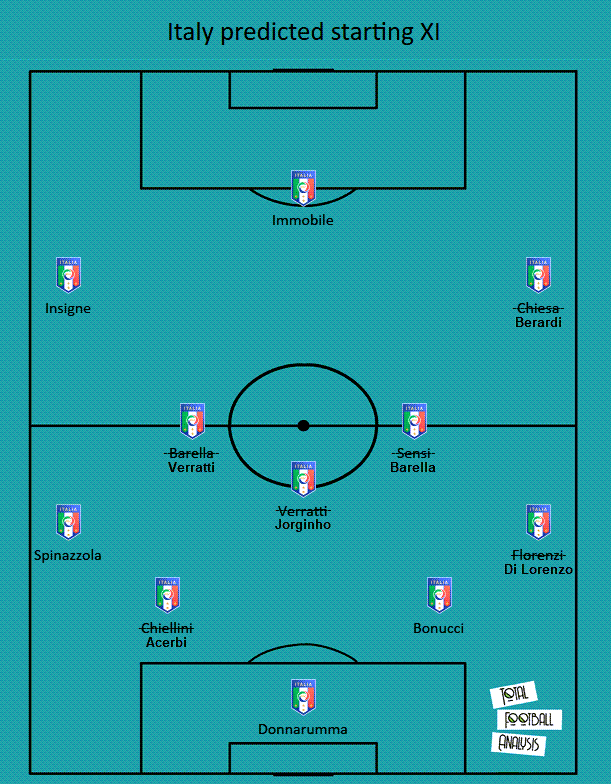 For Austria, Franco Foda would stick to the formation that enabled him to win the last match against Ukraine after he tried the 3-4-3 and the 3-5-2 in the previous games. Therefore, Austria will most probably play according to the 4-2-3-1 formation that suits the players’ characteristics. However, the wingers will be asked to retreat so often in order to form a second defensive line with the defensive midfielders and not leave a lot of space for the Italian attacks. This means that the 4-2-3-1 will transform into a 4-4-2 formation when out of possession with Marcel Sabitzer and Marko Arnautović as the two attacking players.

Austria will rely on Daniel Bachmann as a goalkeeper, Stefan Lainer, Aleksandar Dragović, Martin Hinteregger who has recovered from his injury, and David Alaba in defence. The midfield would include Florian Grillitsch and Xaver Schlager as defensive midfielders, Marcel Sabitzer as an advanced playmaker with both Christoph Baumgartner and Konrad Laimer as wingers to support Marko Arnautović and at the same time defend when needed. 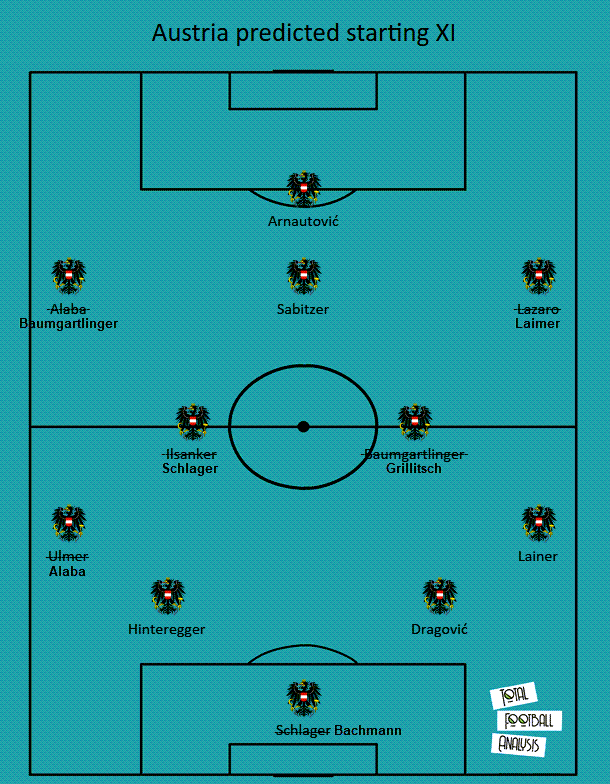 How can Italy be effective in attack against Austria

Knowing that Austria have studied Italy’s attacking plans and watched their performances, Italy need to be a bit creative in this match and alternate between different types of attacks in order to tire and confuse their opponent who will be doing their best to stop and counter the Italian attempts.

In order to prevent Austria from doing that, Italy will have to rely on their quick and continuous possession of the ball in the opponent’s half while moving a lot without the ball to create spaces, and then both full-backs and wingers will have to create the difference through their accelerations and passing combinations on the wing. Spinazzola and Di Lorenzo were able to create a lot of danger in the past games and if they play as they should in this one, Italy will have numerous goalscoring chances.

This is mainly because Austria will surely defend centrally and leave more space on the wings to not allow Immobile or the players who join him to have free space inside the box. However, Italy’s solution to that is to rely on penetrating from the wings continuously and this was fruitful against Swizerland and Turkey, just like you can see below. 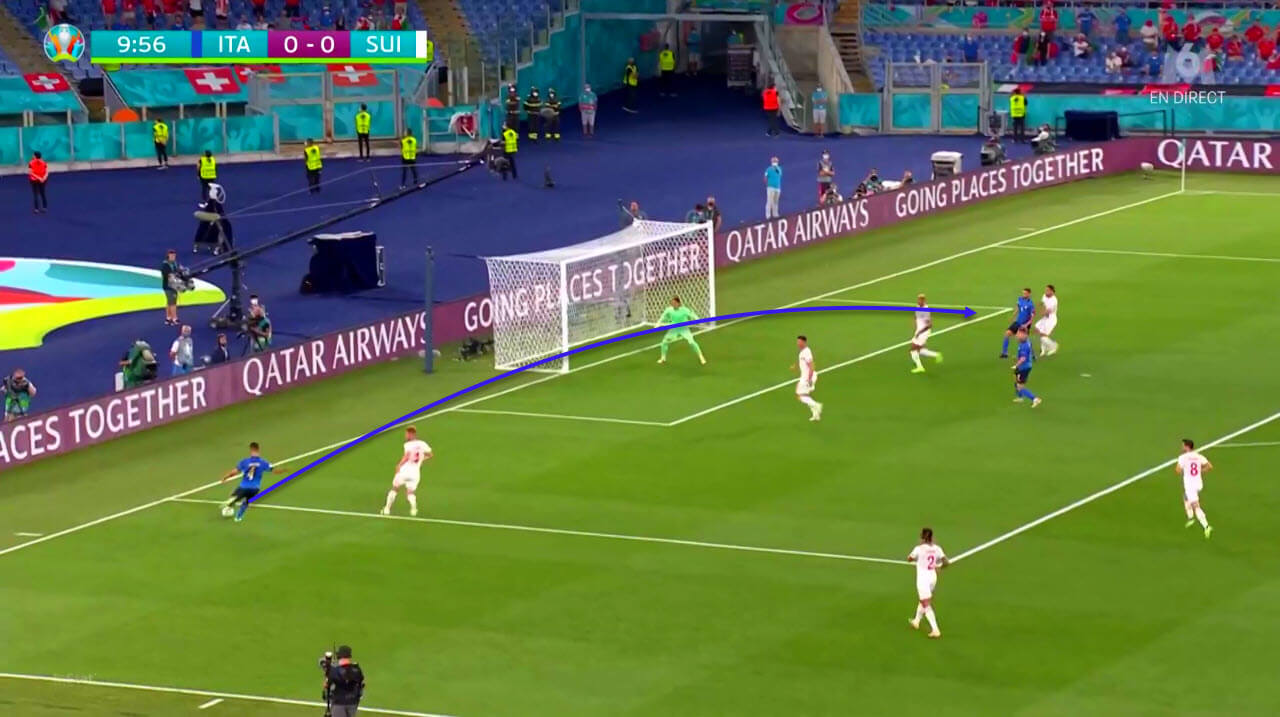 Spinazzola’s accelerations on the left wing brought a lot of threat to the teams that faced Italy even though the opponents were aware of his skills. Yet, opposing defenders were not able to cope with his speed and therefore we saw him succeeding in crossing numerous times per match. Such penetrations allowed Insigne to move towards the box as well and help Immobile by taking defenders off him and having an extra passing option inside the penalty area.

Italy will therefore need to focus on this solution while also relying on the other wing where Berardi often cuts inside and aims at shooting or passing. And with Di Lorenzo playing alongside him, overlaps can also be made successfully on this wing as well. This means that Italy’s midfielders will need to alternate between moving the ball towards both wings while at the same time look for key passes to players who move without the ball inside the box or between the lines, like what happened in the first goal action against Turkey when Locatelli got rid of four opponents with just one pass to Barella. 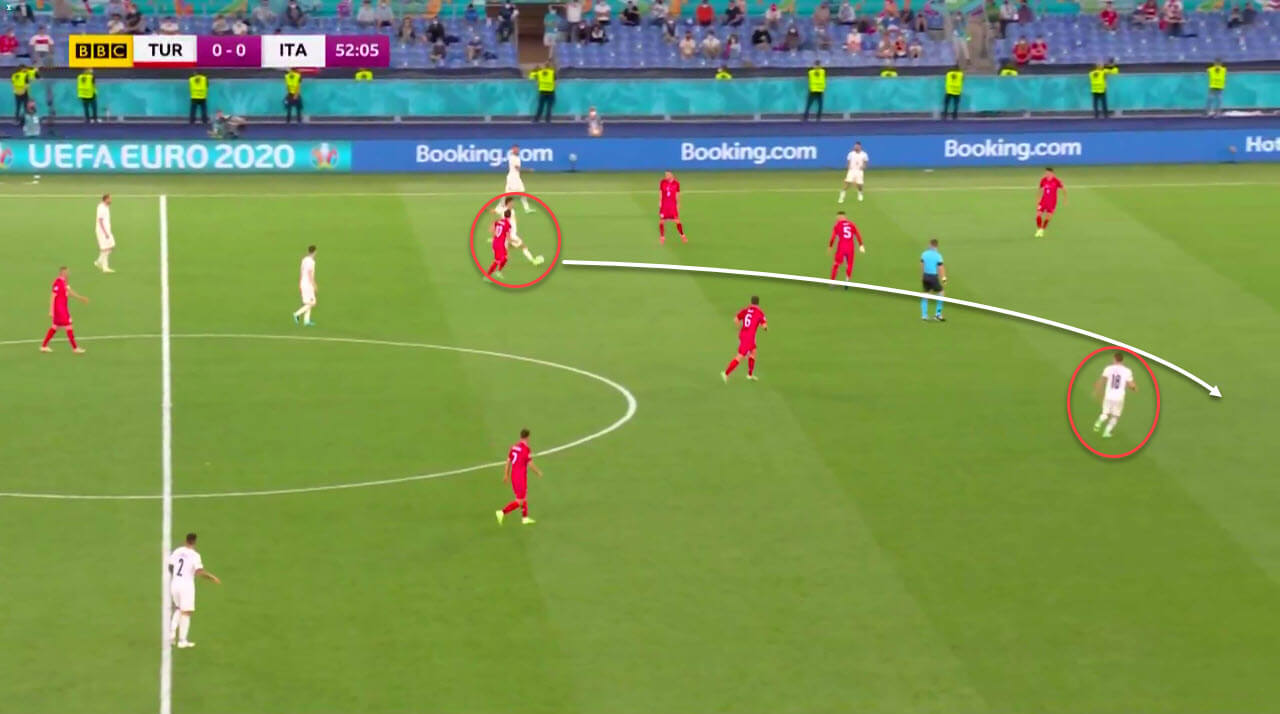 Holding a high rate of passing accuracy is fundamental at such a high level to be able to dominate the game and execute the planned actions without issues. Italy have been excellent in this regard with 87% in the first match and 90% in the second one. Such high rates can only help the team in having greater confidence in their abilities and easier understanding between the players, which explains the smooth and quick transitions that we saw from the Italian players almost every time they built up from the back.

Moreover, exploiting the high quality of midfielders that Italy have will be key to reaching the box regularly and threatening the opponent continuously. And with the return of a player like Verratti, Italy will now have two “regista” players, Jorginho and Verratti, even though the latter will be more likely used as a mezzala. Nevertheless, playing with these two players will enable Italy to circulate the ball easily and make it difficult for Austria to intercept it without making a lot of efforts.

Yet, keeping the ball without shooting on goal or breaking the defence means nothing in today’s football since it becomes passive possession that drains the players’ energy in vain. The midfielders will therefore need to find the right passing options at the right time to create gaps in the opposing defence and enable the attacking players to have shooting attempts. Otherwise, Italy will suffer in this match and this could create a confidence issue if the problem persists.

It will be necessary to give the likes of Insigne, Immobile and Berardi the opportunity to be in such situations in order to score, and this can only be possible by providing key passes at the back of defenders, just like in this example. 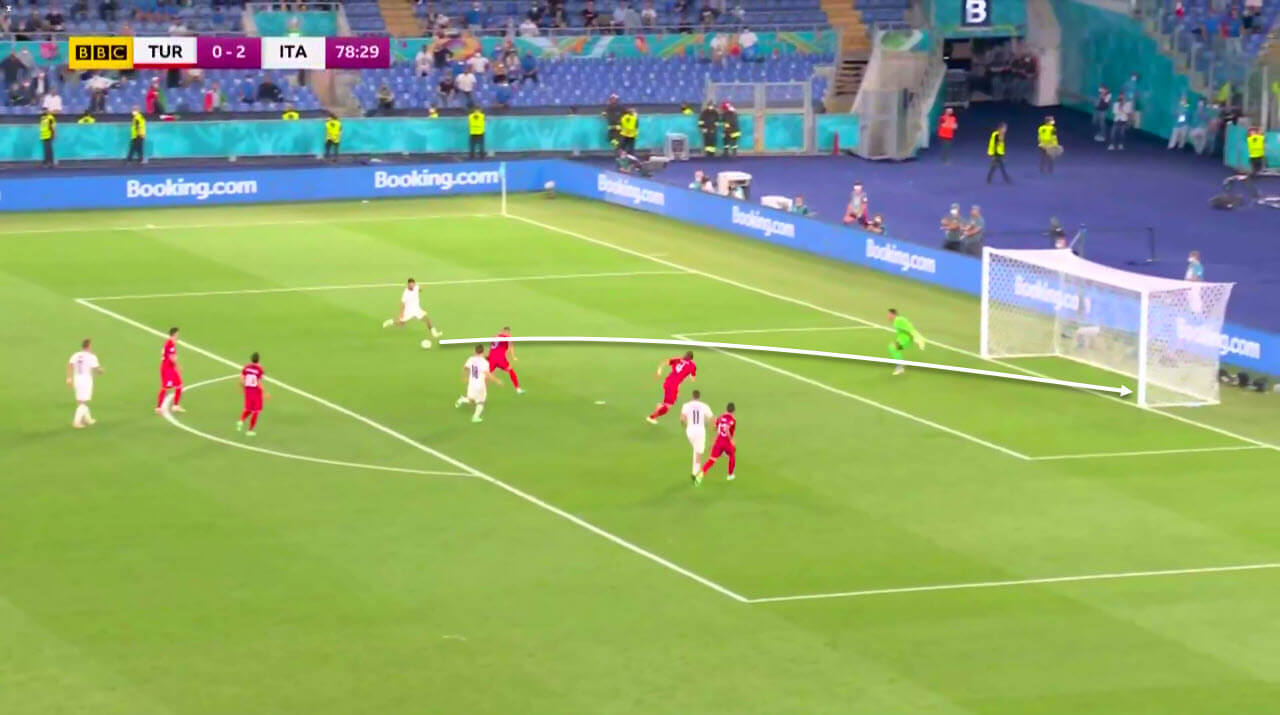 How to stop Austria’s dangerous attacks

Italy will need to be attentive from a defensive perspective in this match since they are facing a much more efficient team than the previous ones especially from an attacking perspective. Austria have several attacking weapons that will be used in this match. First, Sabitzer’s shots from distance have always been dangerous and this player attempts at shooting whenever he finds a little bit of space since he is aware of the impact of his accurate and powerful shots. Therefore, midfield and defence players will have to press on Sabitzer whenever he receives the ball in the final third to prevent him from shooting.

Another important weapon for Austria is set-pieces. Austria rely on Alaba as a set-piece specialist who takes care of crossing and serving his teammates from corner-kicks as well. And Italy will need to be careful in aerial duels since they will be facing some powerful players in the air such as Arnautović and Baumgartner who has just scored a goal from a corner-kick against Ukraine. Even though Italy has some tall and good defenders in the air like Bonucci and Acerbi, Austria’s set-pieces can still bring a lot of threat and opportunities. 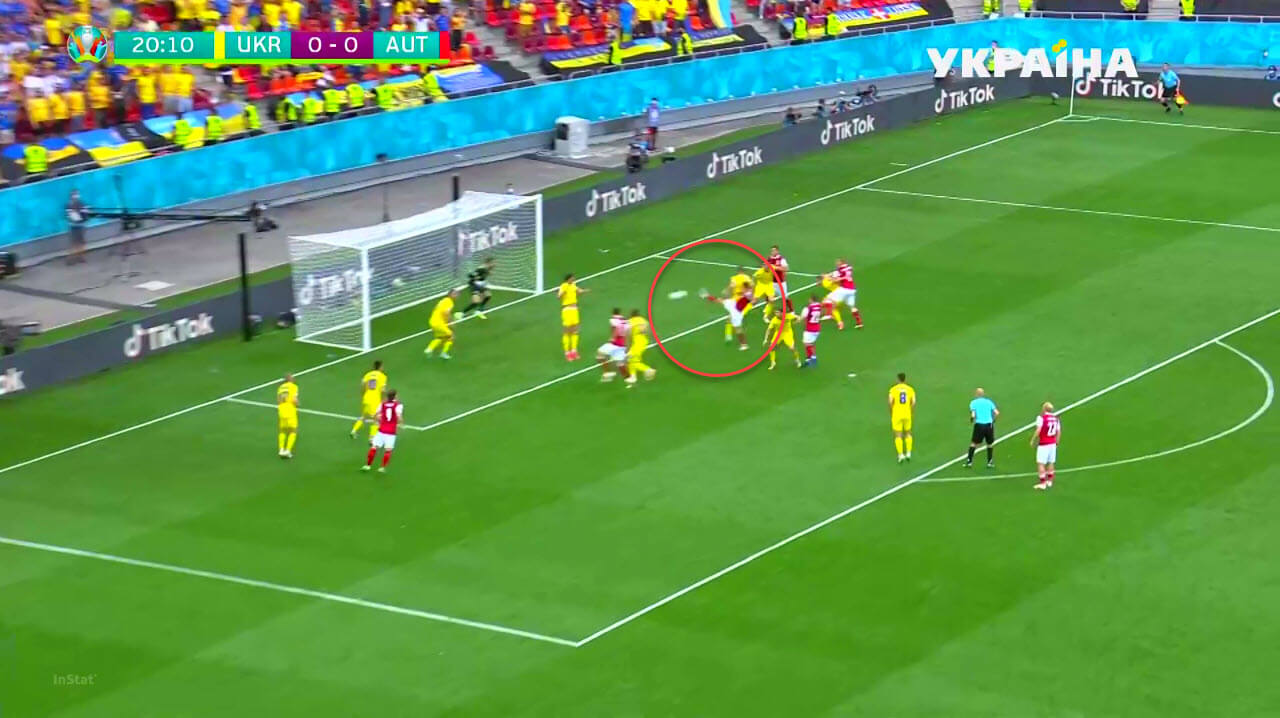 In addition to these attacking options, Austria will rely on crossing from the wings since they have some excellent wingers plus Alaba and Lainer who are known as attacking full-backs who cross well, shoot from distance and give key passes so often. Italy’s defensive duo will also have a difficult mission since they will need to stop a player like Arnautović and mark him throughout the match to not concede dangerous opportunities and prevent him from getting the space that he needs to shoot.

Italy will be facing a tough Austrian team in this Round of 16 and this will be the first real exam for the Azzurri. On the other side, Austria have already made an achievement by reaching the knockout phase and will do everything necessary to beat Italy and make a historic result, but this will also be complicated since Italy are going through one of their best periods in this EURO 2020. 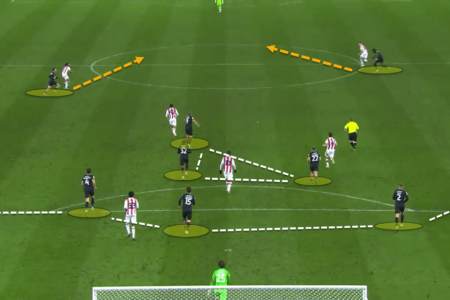