Write off Italy at your peril. Tournament after tournament the Italian national team seem to raise the game at the biggest stage and they have a reputation for being extremely difficult to beat in the games that really matter. That was until they failed to qualify for the last major tournament, the 2018 World Cup in Russia. Now, though, with the rescheduled Euro 2020 on the horizon we see a new look Italy gearing up for the competition. The defensive solidity that we traditionally associate with the Italians remains but it has been combined with a more modern and progressive approach. This combination could well see the Italians go far this summer.

A qualifying group that included Greece, Finland, Bosnia & Herzegovina, Armenia and Liechtenstein may not have provided much of a challenge but the Italians still handled each fixture with a professional approach. Now, a group with Turkey, Switzerland and Wales poses a more significant, but not insurmountable, challenge for the Italians.

So far we have seen coach Roberto Mancini announce a provisional and not full squad with a genuine mix of experience and youth. 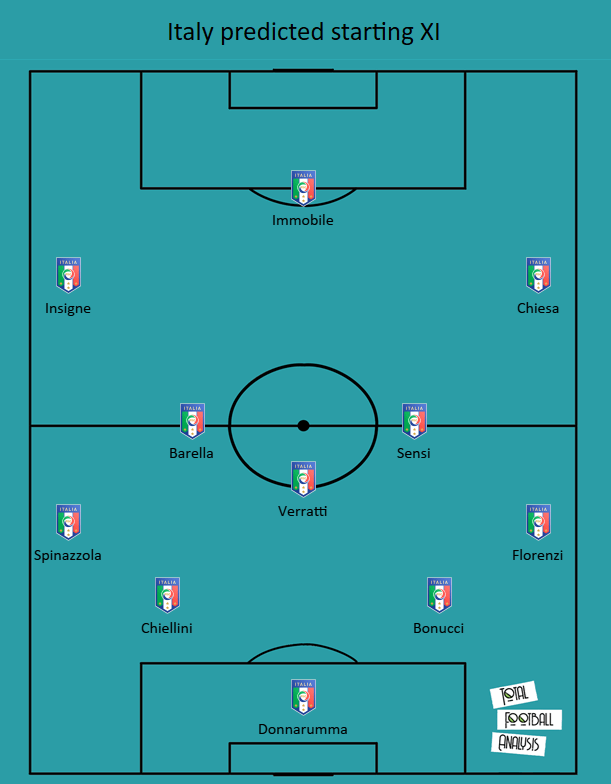 Under Roberto Mancini we expect to see Italy line up in a 4-3-3 shape although the fact that the Chelsea midfielder Jorginho is not in the provisional squad is something of a surprise. Instead, we expect to see either Stefano Sensi, of Inter, or Manuel Locatelli, of Sassuolo, take the role of the ‘6’ at the base of the midfield.

In goal Gianluigi Donnarumma will start with a central defensive partnership of Leonardo Bonucci and Giorgio Chiellini although Italy are now defending with a much higher line and this could be a stretch given the advancing years and lack of pace of the two central defenders. The fullbacks are expected to be the very modern pair of Leonardo Spinazzola on the left and Alessandro Florenzi on the right.

In the midfield Nicola Barrella and Marco Verratti provide incisive passing and aggression in the midfield alongside either Sensi or Locatelli.

In the attack Ciro Immobile of Lazio carries a genuine attacking threat and he will likely be supported by Lorenzo Insigne on the left and Frederico Chiesa on the right. 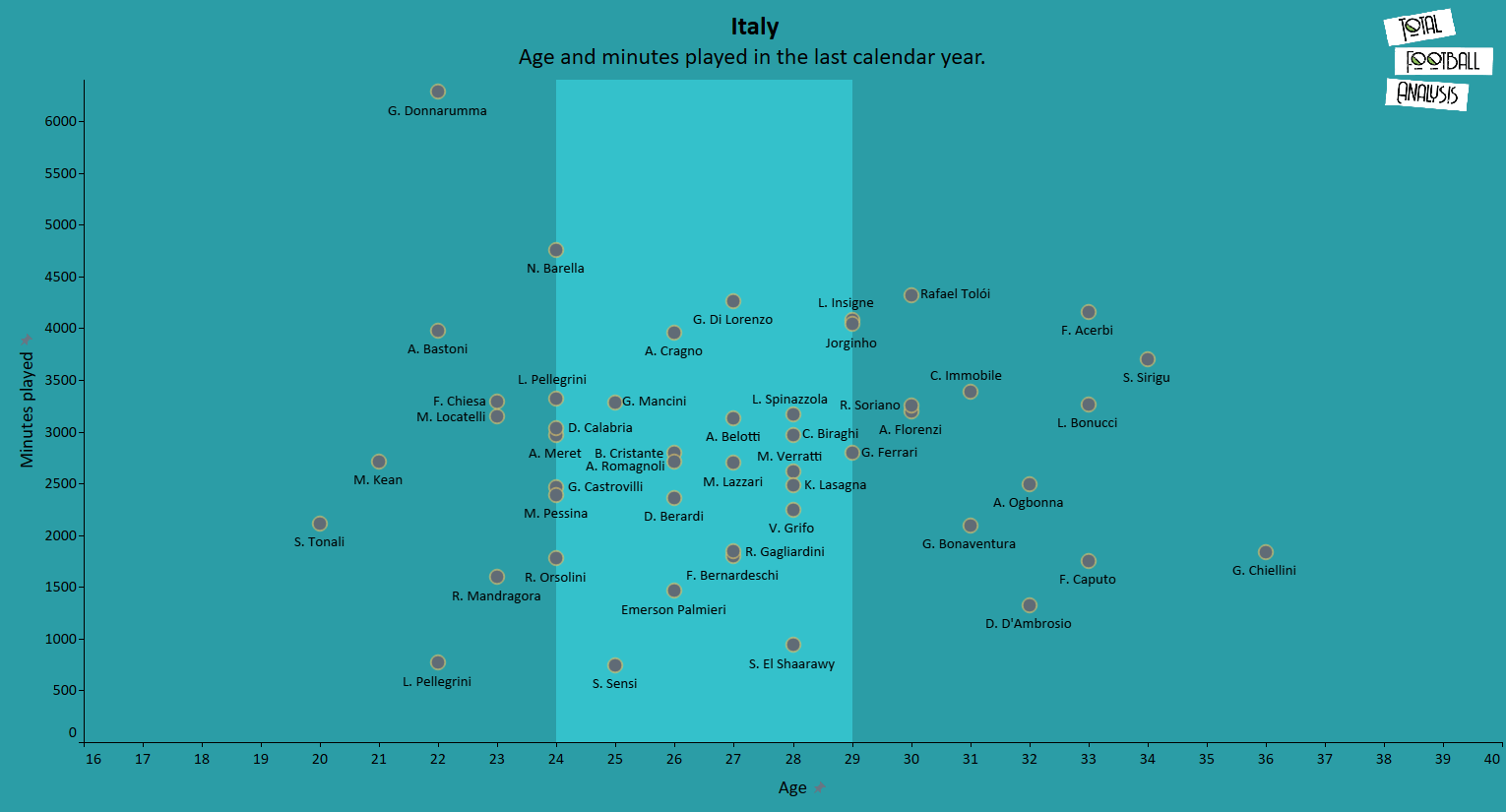 Here we have an age profile for Italy over the last calendar year which shows all players who have been called into the national team squad over that time frame. The most eye-catching thing is that there have been a large number of players called up and tested.

The lighter blue area shows players that are in their peak while the darker blue to the right shows experienced players and to the left shows younger players.

We already know, of course, that Chiellini and Bonucci are on the older side of the scale but so is Ciro Immobile. Donnarumma is firmly in the youth category, despite seemingly being around for years, and the likes of Chiesa and Locatelli also offer youth.

The majority of the rest of the squad is then firmly in the peak group. A promising sign for this Italian side moving forward. 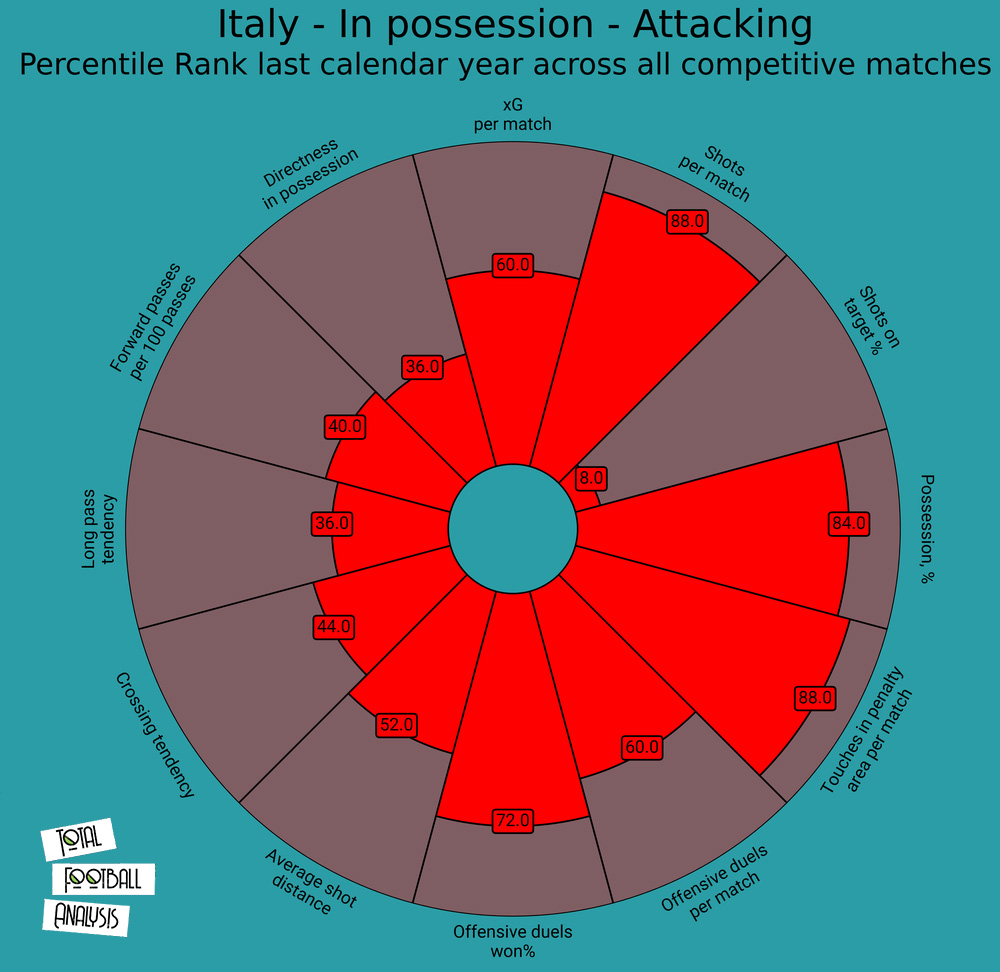 Under Roberto Mancini, Italy have developed a modern possession-based style that sees them play progressively through the thirds in order to create goal-scoring opportunities. They tend to press their defensive line all of the way to the half-way line and as such the opposition are compressed into their half.

With creative passing midfielders combined with wide forwards who occupy the half-spaces and fullbacks who move high in possession they can create overloads across the width of the pitch. 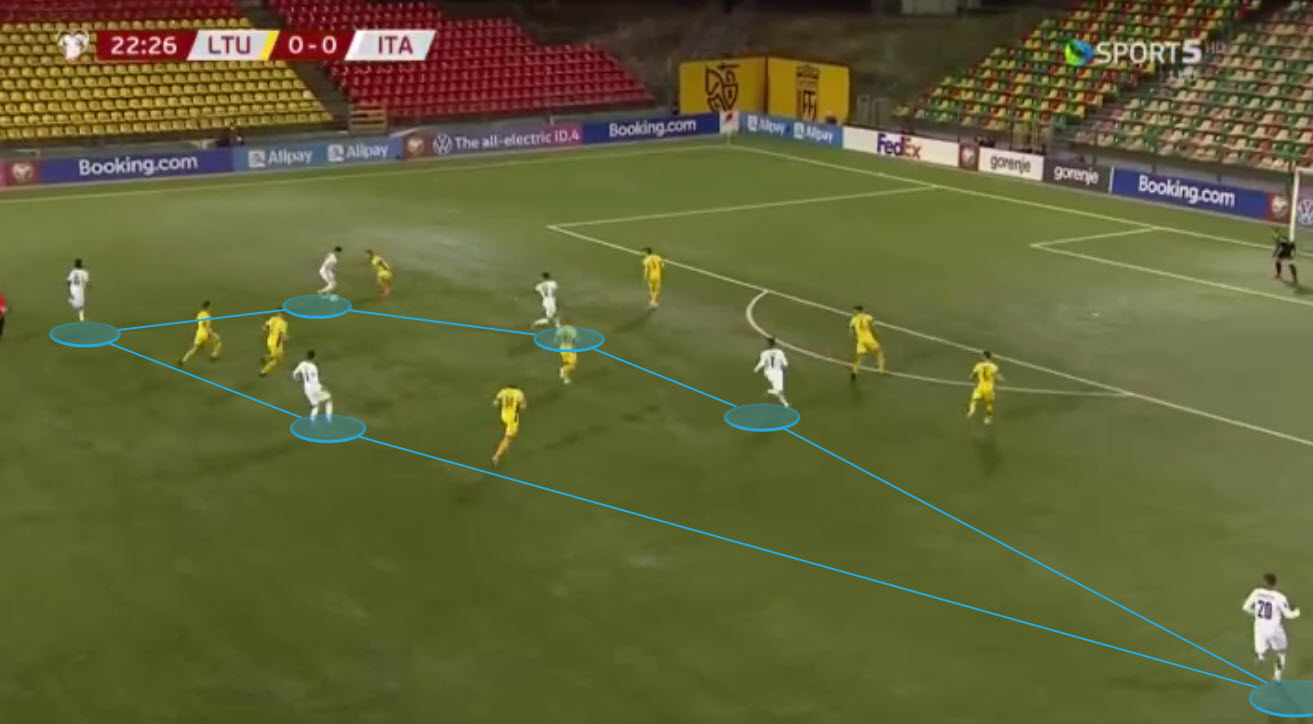 When Italy move into advanced positions they do so in numbers in order to create overloads to break through the opposition defensive structure. We see this here in the recent match against Lithuania. Italy have progressed the ball forward quickly and the midfield pushed out to support the man in possession. One switch of play will then create a breakthrough into the penalty area. 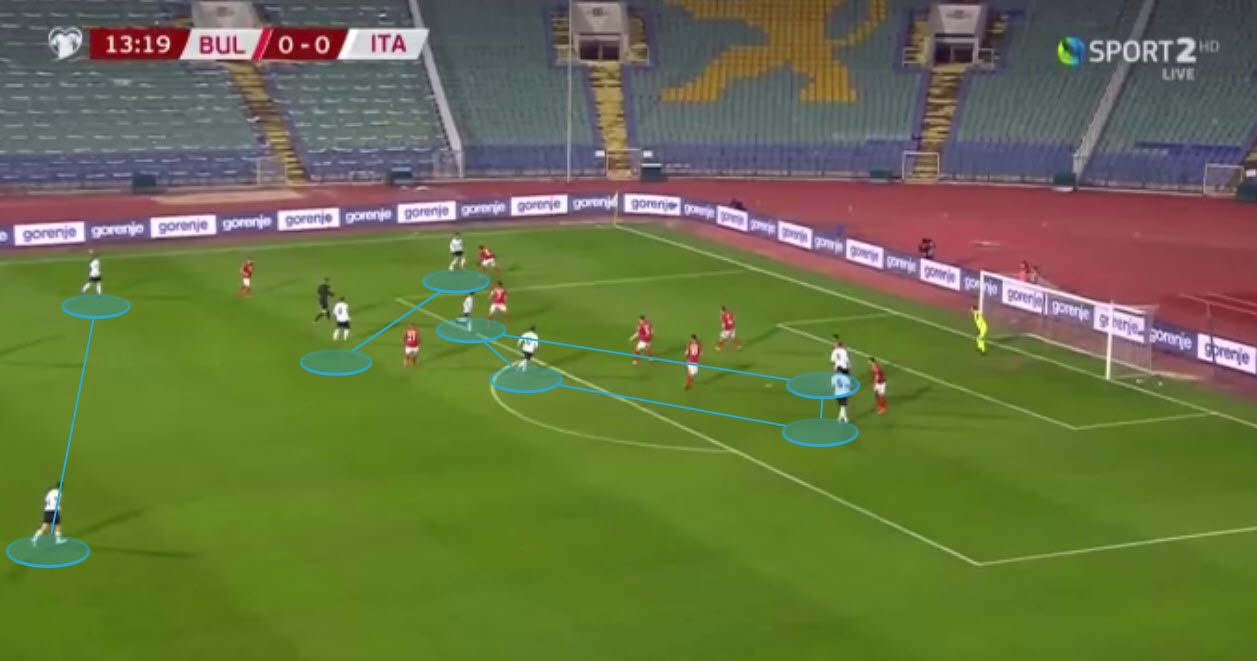 This time we see Italy again looking to overload the opposition, this time Bulgaria. The ball carrier is wide and Italy have four players looking to access the penalty area.

The man in possession then has three players on different lines that are in support. If the pass cannot be accessed into the area then the ball can be recycled backwards or switched across to the far side.

These attacking structures effectively allow Italy to keep the opposition pressed back in their own half. 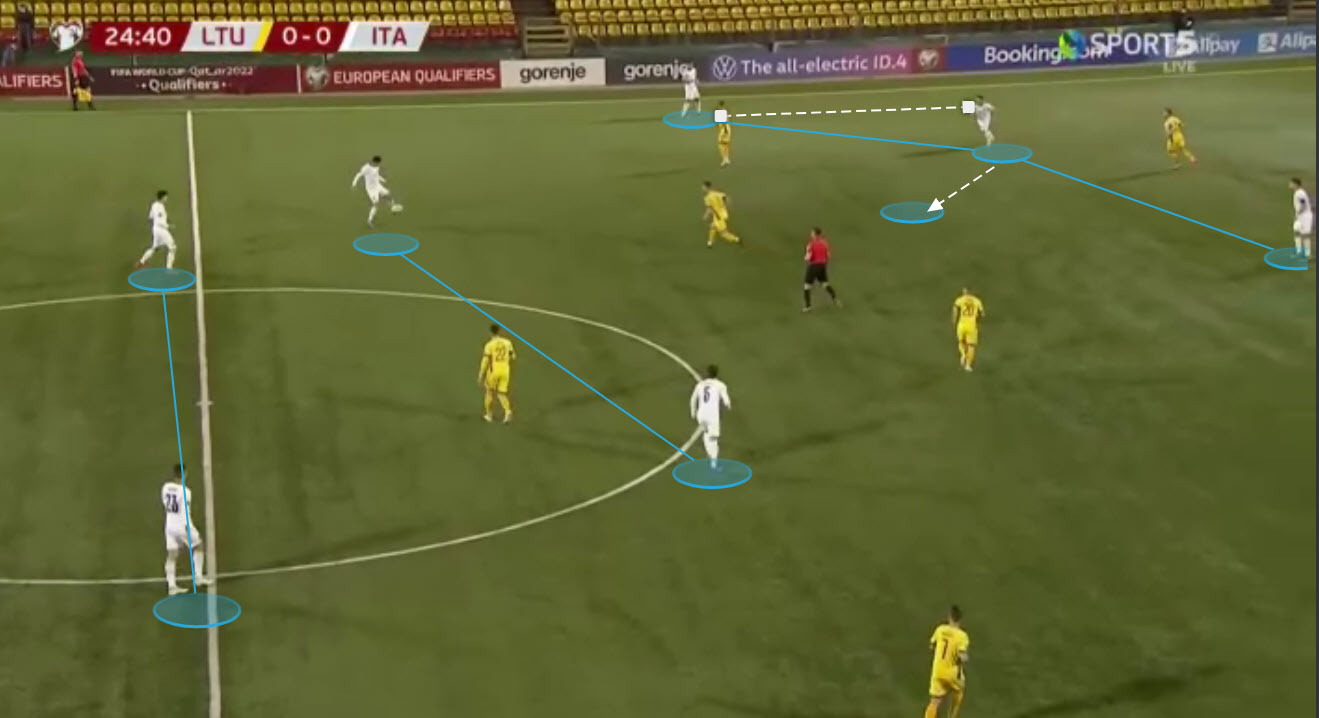 Italy use rotations in the attacking phase in order to create opportunities to outplay their opposition. Here, we see the left sided attacker moving inside to occupy the half space. This movement allows the left-back to move immediately into a higher position and suddenly Italy are creating opportunities on different lines to break down the other team. 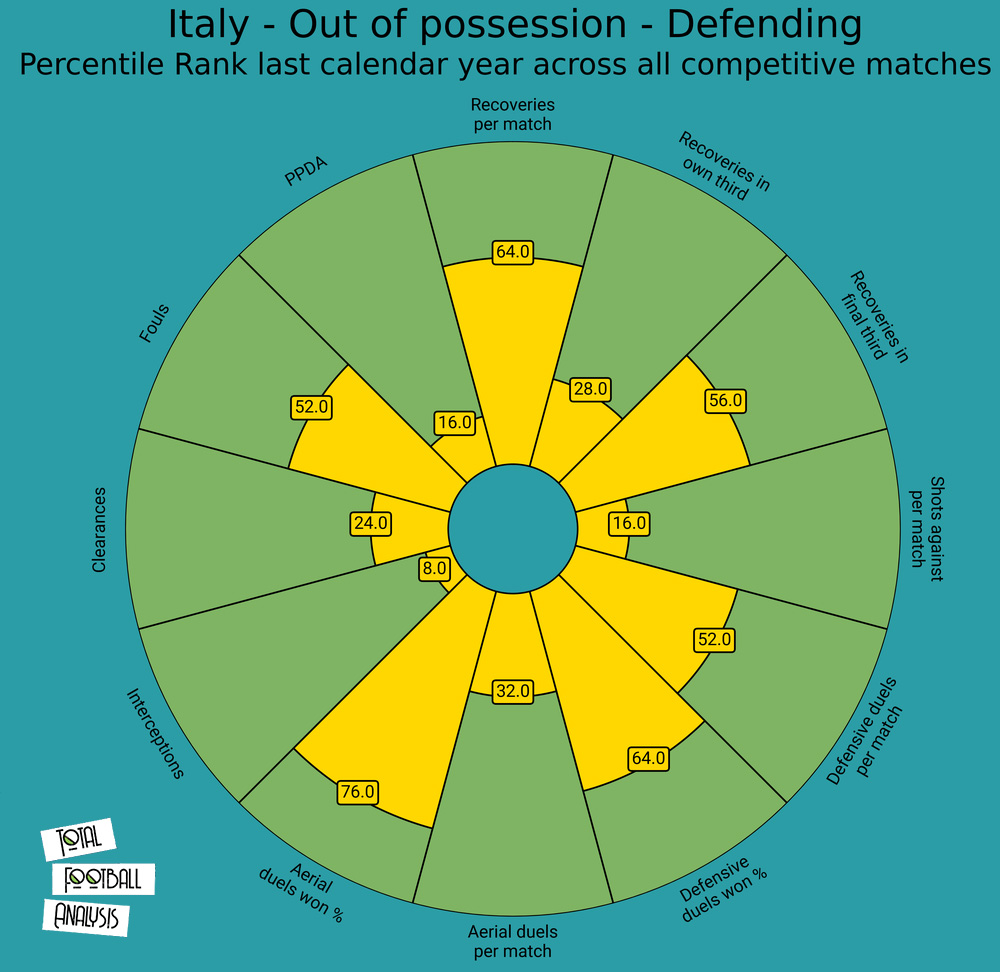 The fact that Italy are so proactive in the defensive phase means that when it comes to defending they do so from a higher starting position. This, in turn, means that they will tend to engage in more defensive duels, as opposed to aerial duels, and that there will also be more recoveries per 90 and recoveries in their own third per 90. 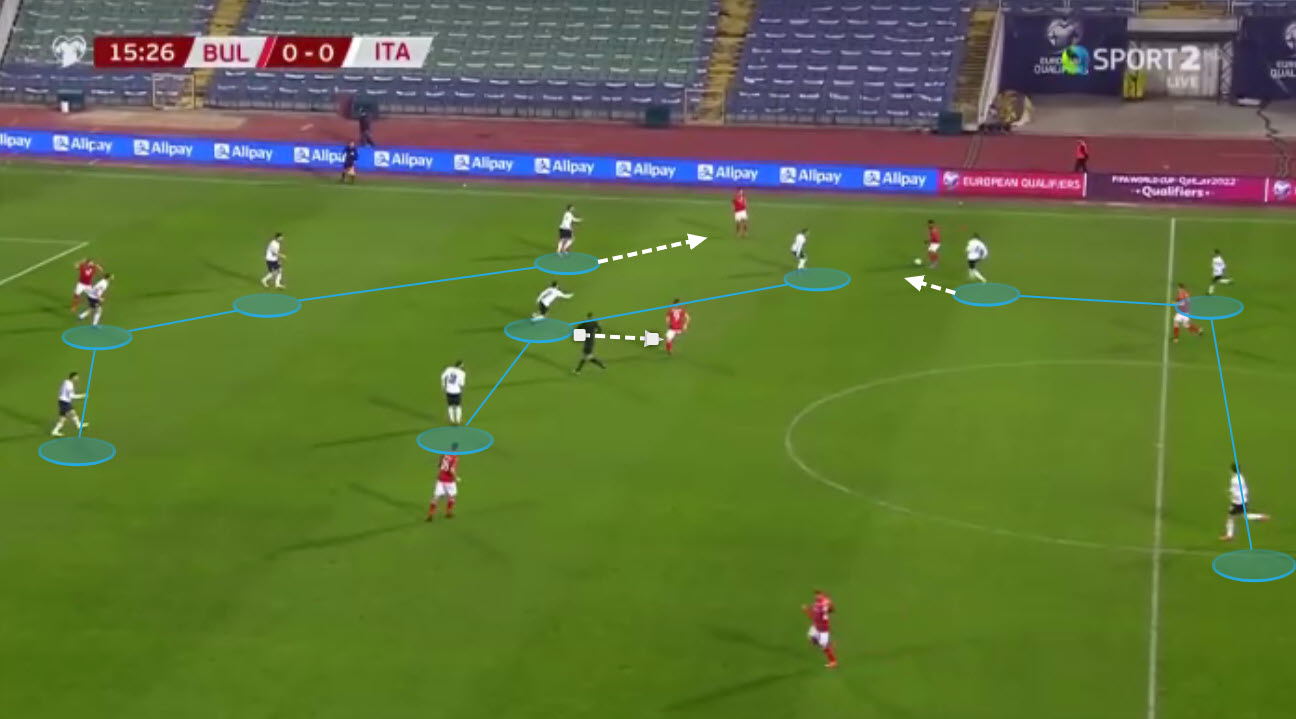 Here we see Italy defending as Bulgaria attacks down their right side. Italy are in their 4-3-3 shape with the ball side fullback and central midfielder shading out to close down that side of the field.

The man in possession is then being pressed from behind as Italian players move man to man to take away his passing options. By pressing in this manner Italy contain the threat and prevent the opposition from breaking through. 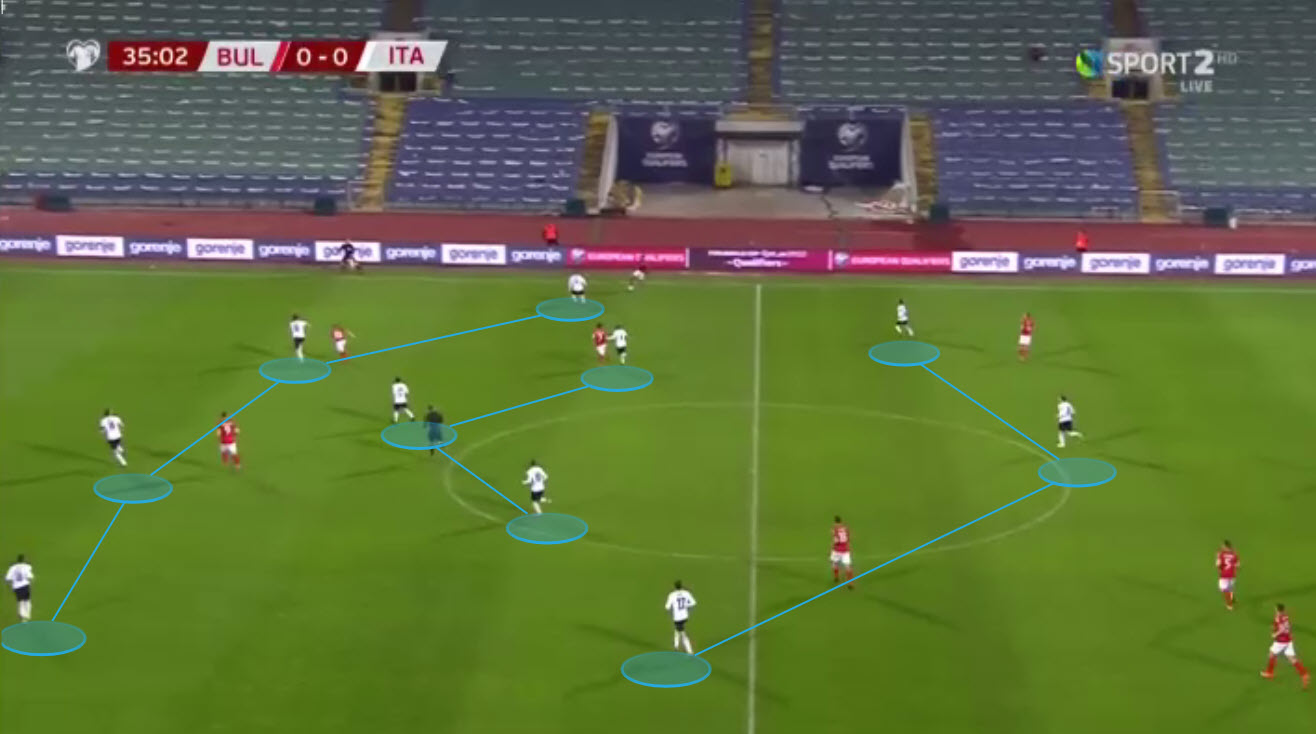 A similar situation here as Bulgaria attacked down the far side. Once again the key for the Italian defensive system is in the structure. The 4-3-3 is immediately defined and the ball near fullback moves out to engage the ball carrier.

The rest of the passing options are again taken away through man-marking. 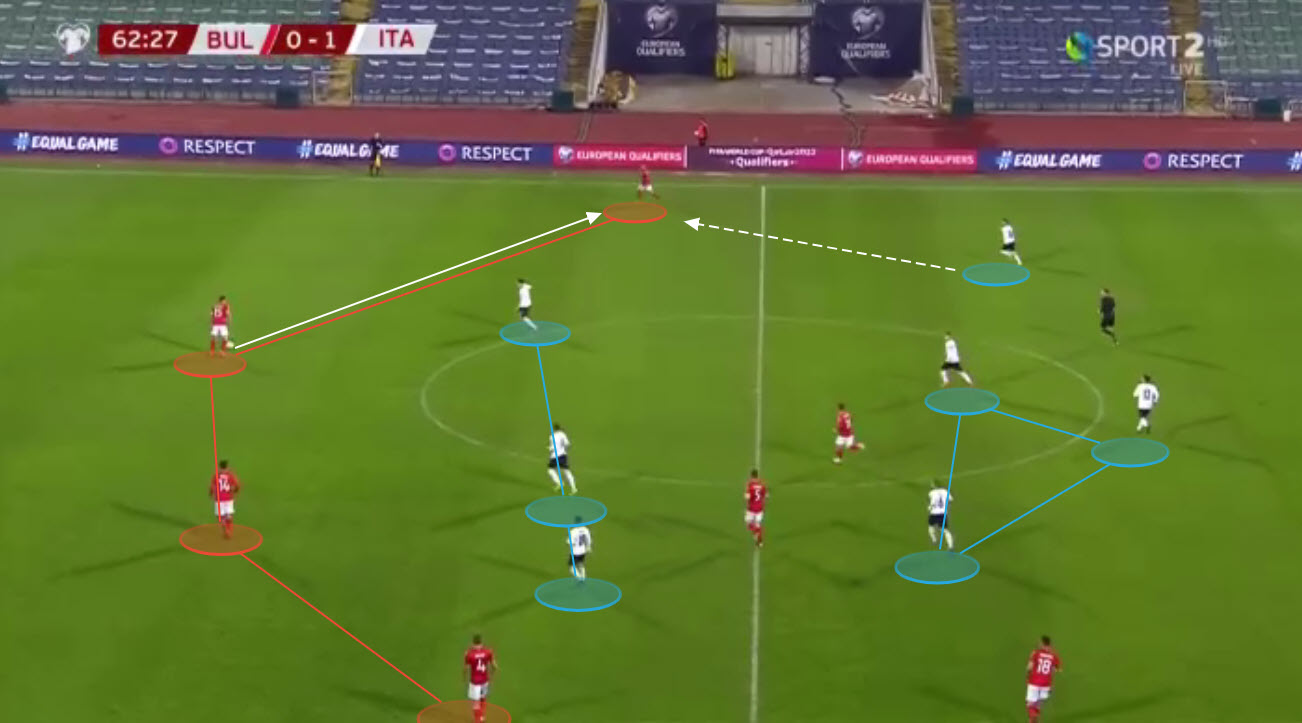 Once again in this example you can see the clearly defined 4-3-3 system with the three forward players across the front line to engage the first line of the Bulgarian build-up.

As the ball moves out to the left-back for Bulgaria we see the Italian right-back moving aggressively to press and engage the ball. Traditionally Italian fullbacks would sit deep and maintain their defensive line. Now they are free to be far more forward-thinking whether in or out of possession. 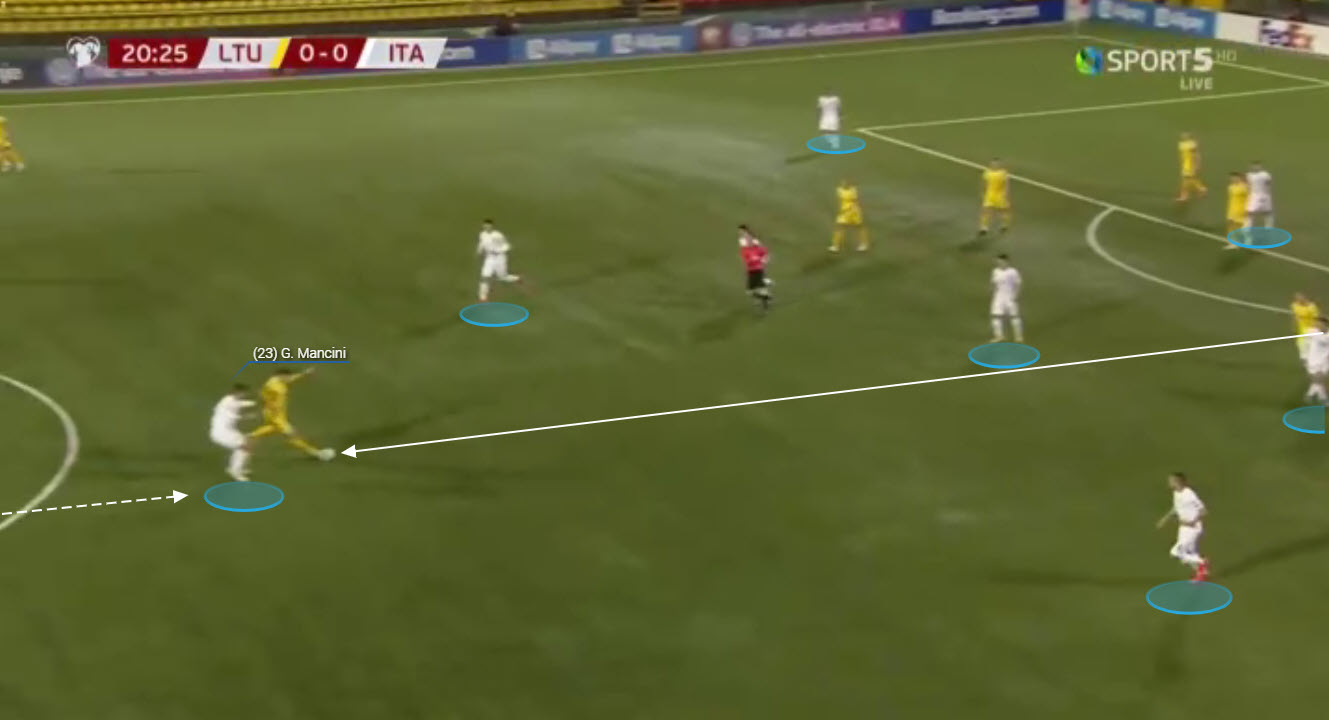 This aggressive defensive approach from the Italians extends to the way that they defend in transition with defensive players encouraged to win the ball back high up the field.

We see an example of this here as Lithuania look to play with a direct forward pass in transition. The defender, Mancini in this case, reads the pass and aggressively steps out to engage the forward before winning the ball back. 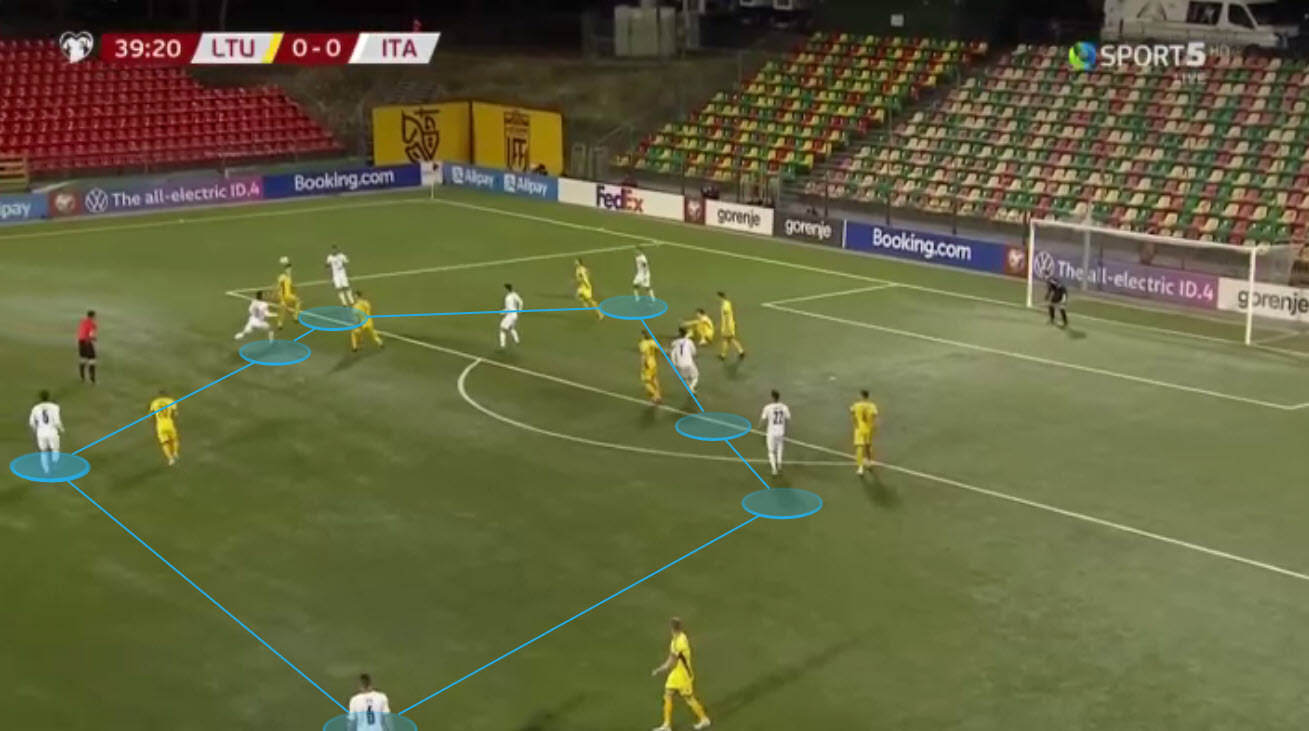 In transition Italy commits so many players into advanced positions that when the opposition wins the ball back they are ideally positioned to immediately counter press in order to force a turnover. 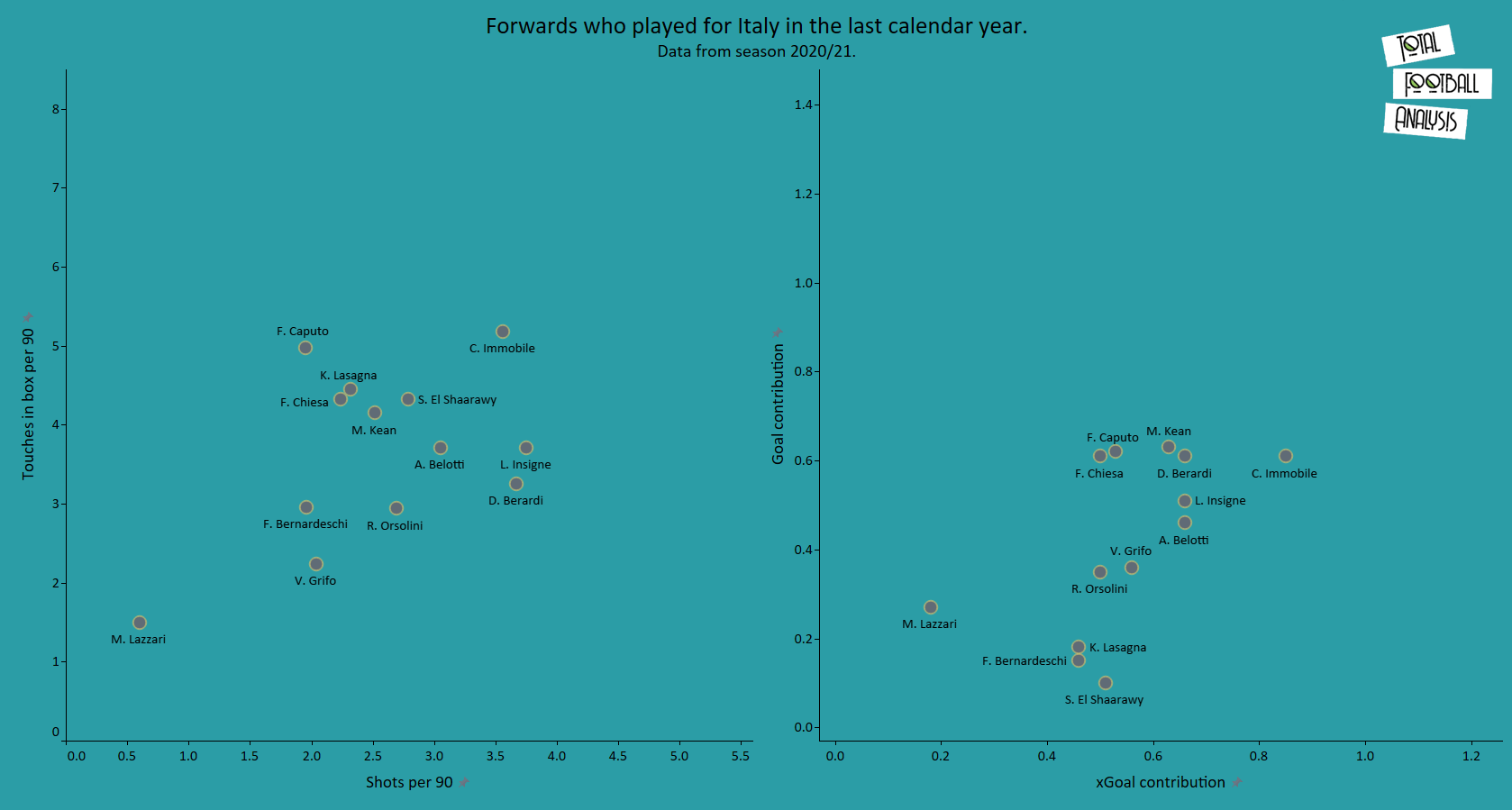 When assessing the Italian forward players that have been called up to the national side over the last calendar year it is quickly clear that Ciro Immobile is the key player. He averaged over 3 shots per 90 and had 5 touches in the opposition area per 90. This is combined with a goal contribution per 90 of over 0.6.

Lorenzo Insigne also had strong output over the course of the season and he should be a genuine threat when cutting in from the left side. 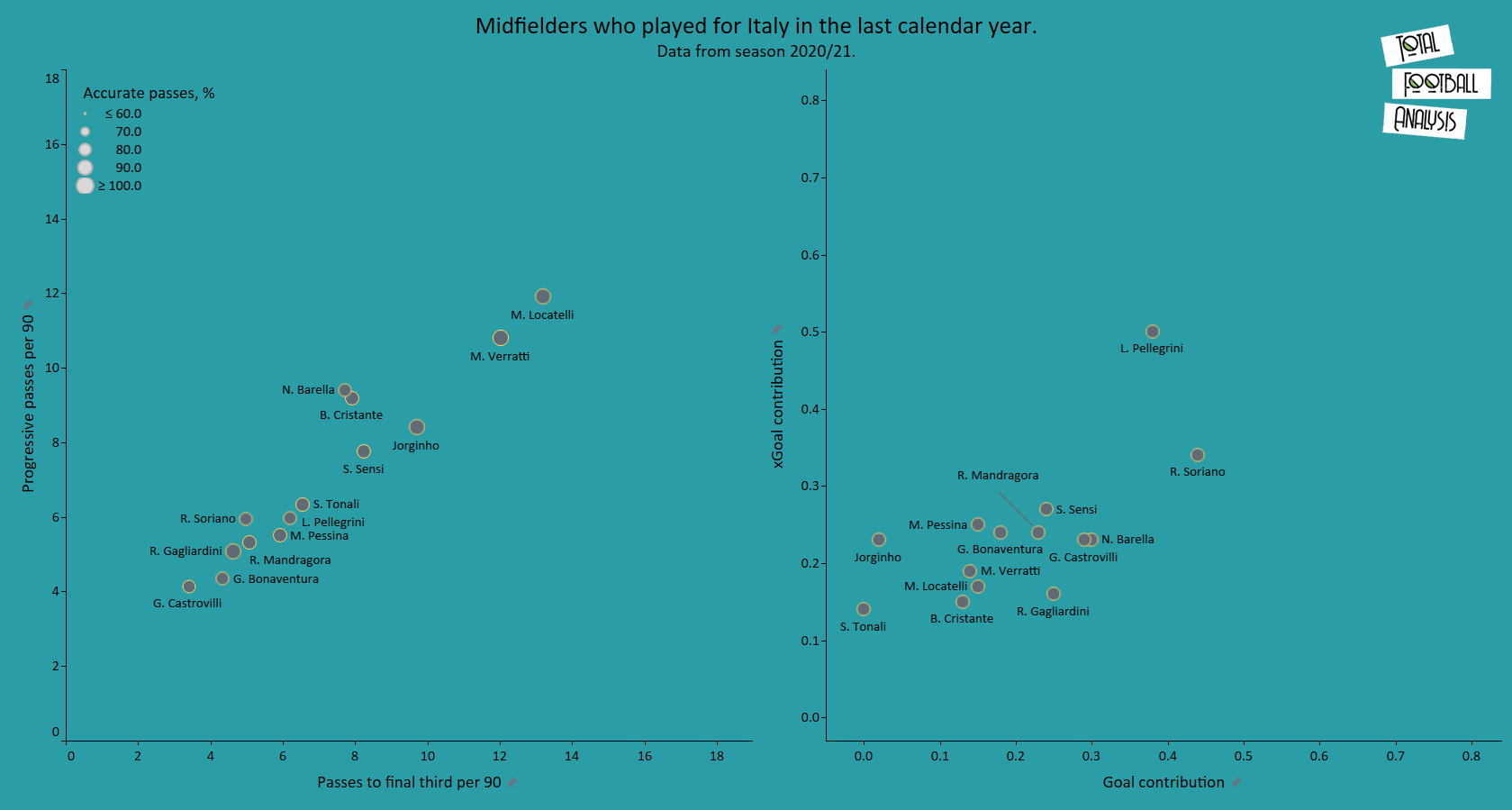 In terms of progressive passing metrics Manuel Locatelli shows why he is a contender for the ‘6’ position in place of Jorginho. He averaged over 12 progressive passes and 12 passes to the final third per 90.

Marco Verratti is also an extremely progressive passer and he could work very well in tandem with Locatelli with the more vertical running Barella beside them. Italy are not blessed with goal-scoring midfielders but the creativity in the centre of the park will balance this out. 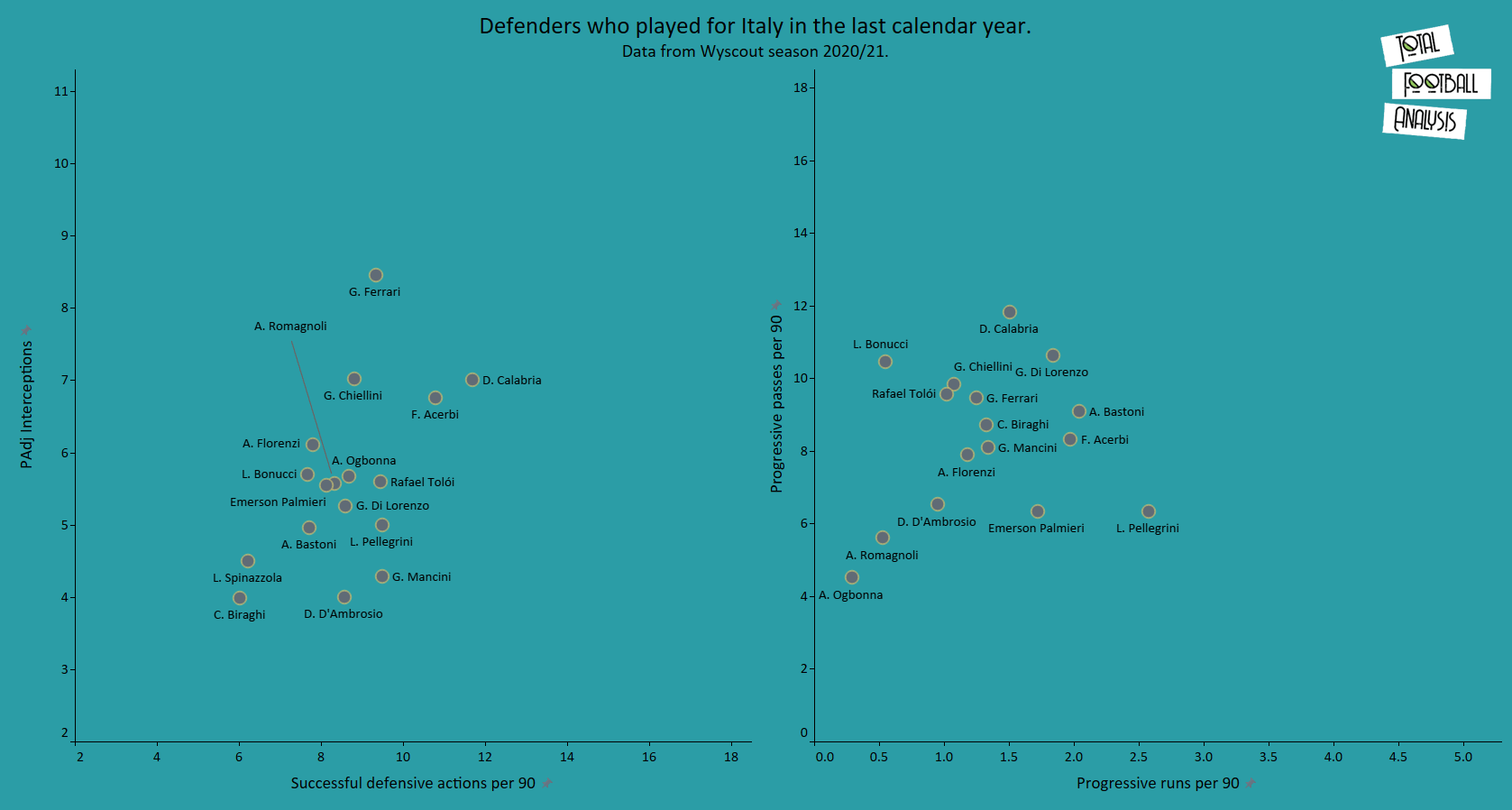 In terms of defenders output we can see that Bonucci and Chiellini do not stand out from the crowd although this is likely due to the defending style of Juventus this season. The style of defending that Mancini has taken in will see them become more active in their defensive output and both central defenders are experienced enough to be able to change style. 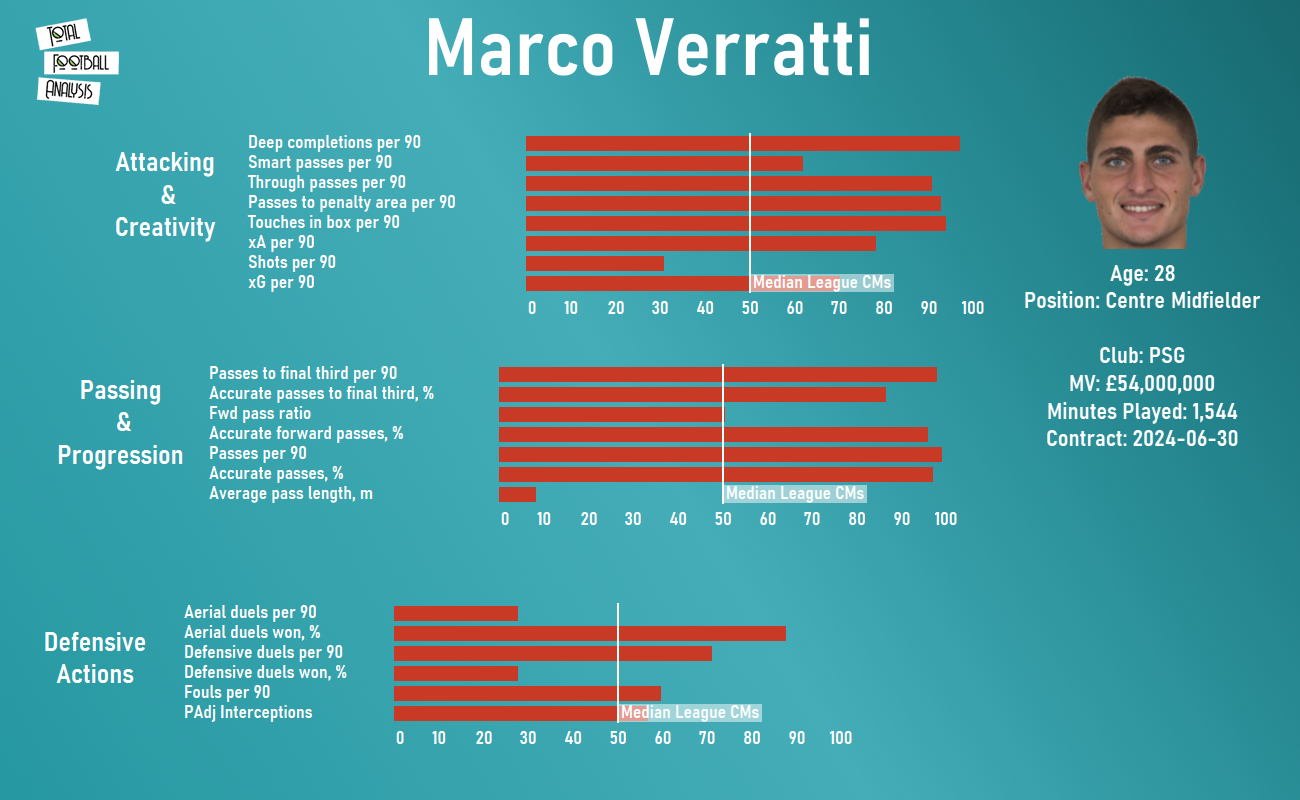 Marco Verratti is a midfielder who is going from strength to strength as a football player. Playing in the heart of the PSG side he already plays in a system that is similar to the way that Mancini wants Italy to play. They are possession dominant and progressive in their passing approach and this fits Verratti perfectly.

As you can see his creative metrics and progressive metrics are fantastic. He will be a genuine threat with the ball in the opposition half of the pitch and he could be a contender for player of the tournament.

PREDICTIONS FOR THE TOURNAMENT

Italy are my picks for the tournament winners. They have a mix of experience and youth and a coach who has instilled a defined and effective model of play on the team. Teams will find it hard to play through their pressing system of play and when they regain the ball their technical ability should shine through.

Italy have creativity and goals in their squad to go with their normal defensive strength.

Ecuador are a proud footballing nation, but amidst the likes of Brazil, Argentina, Uruguay, Colombia and Chile, they have always […]

Despite a fanatic love of football in the country, Turkey have long been underachievers on the international stage. They have […]

The wait is finally over. After 22 long years Scotland have once again qualified to play in a major international […]