Monchi is often regarded as one of the best football minds around. His work at Sevilla has seen the club become a big team in Spain and Europe, winning several trophies in the process. He’s well-known for his ability to find undervalued talent, bring it to the club and sell for a big profit while also maintaining a highly competitive team capable of fighting with any club in Europe.

But Monchi’s CV is not perfect. He was at AS Roma for two seasons and his results were deeply disappointing, leaving the club in a worse situation than they were at before his arrival and making some very questionable transfers. In this data analysis, we will look at some of the reasons that can explain his failure in Serie A, focusing especially on what he did differently from his time at Sevilla.

For this data analysis, we have used transfermarkt data. When a player was signed on loan and then made permanent, we have counted it as permanent and put the total spent on loan fees and transfer fees as the price. When we counted the percentage of minutes each player played, we only looked at league games.

How did Monchi recruit?

The first thing we are going to analyse is how Monchi used to operate in the market in between the 12/13 and the 16/17 seasons at Sevilla and how he operated in his two seasons at Roma. Let’s start with the type of transfers he preferred each season. Keep in mind we are only taking into account the players he brought to the team, not the ones transferred out.

The first thing we see is that Monchi is usually very active in the market. During the five seasons we are analysing at Sevilla, he averaged 13.8 incoming transfers every year, increasing slightly to 14.5 in his two seasons at Roma. The change wasn’t too big and we must search for explanations in more detail.

What changed between both clubs is the type of transfers Monchi chose. While buying players was both times the most used option, Monchi averaged 10.5 bought players per season at Roma and only 7.8 in his previous five seasons at Sevilla. With Sevilla, Monchi preferred more loans (3.4 per season, just two in Roma) and free players (1.2 and 0.5), which are less risky operations as you have at least one season to watch the player before getting him or not on a permanent deal, or you get him for just the salary in the case of free agents.

As we’ll see further down this data analysis, it was in expensive transfers where Monchi committed his worst mistakes at Roma. At Sevilla, as he didn’t risk that much money in permanent deals, instead he had more flexibility to evaluate the players and build the squad. He did maintain his idea of promoting one or two academy players each season to the first team in both clubs.

How much did he spend?

The second aspect we are considering here is how much did Monchi spend and how much he received. He’s known as someone capable of creating competitive squads while also generating revenue for his club, so that’s what Roma probably expected when they signed him. 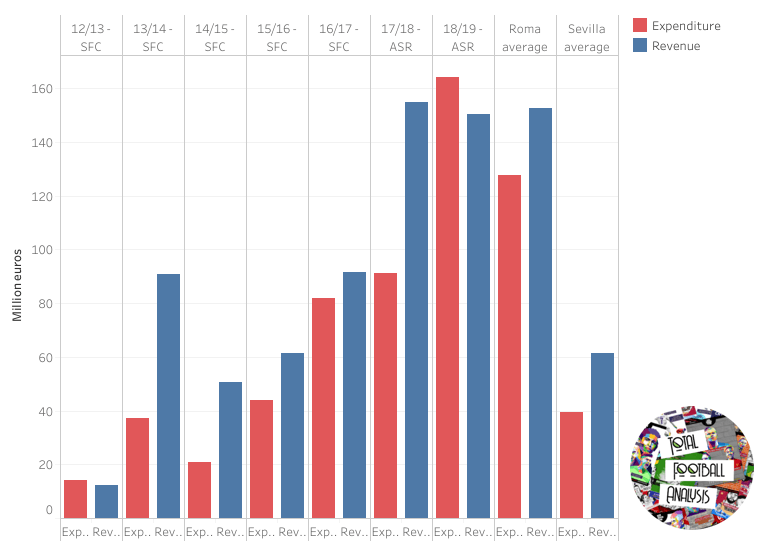 As we can see, Monchi spent way more in each of his two seasons at Roma than he spent in his previous five seasons at Sevilla. He never spent more than 81.7 million in a single season with Sevilla before arriving at Roma, but in his two seasons in Italy, he spent 91.2 and 164.1 million euros respectively.

Also at Roma, Monchi only got net benefits from transfers in the 17/18 season, losing 14.1 million in his second and last season in Italy. If we compare this to the previous five seasons, Monchi had only had negative results in 12/13, losing just 1.8 million euros. His average revenue at Roma was almost 20% higher than his average expense, while at Sevilla it was almost 55% higher. This means Monchi couldn’t find that much value when spending more money on players. We could argue that Monchi isn’t as good as spotting talent in more established players than he is in relatively lesser-known ones.

This huge spending wasn’t matched with results. In the 16/17 season, before Monchi’s arrival, Roma finished in the second position, just four points behind Juventus. In Monchi’s first season, Roma got 10 points fewer and finished third, 18 points away from Juventus. And in Monchi’s second season, they finished sixth, 24 points away from Juventus and with 11 points fewer than in the previous season. In total, Roma went from finishing second with 87 points in the 16/17 season to finishing sixth with 66 points in the 18/19 season.

Another reason for his failure at Roma compared to his previous spell at Sevilla could be where Monchi chose to look for his signings. 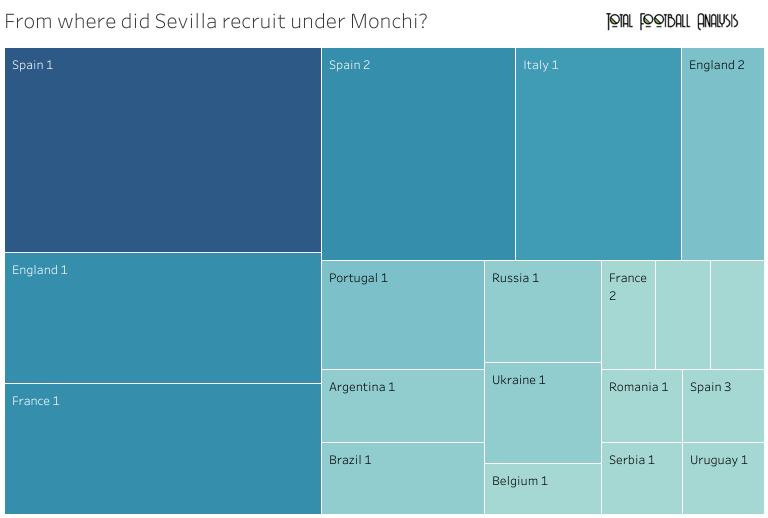 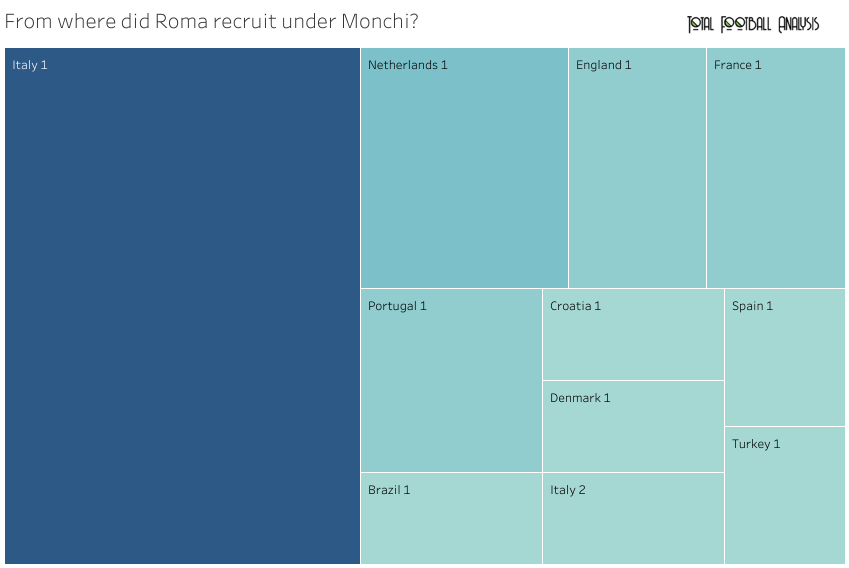 If we look at both graphs above, we start to see some differences. At both teams, Monchi preferred to focus on their local markets but did it much more while at Roma, signing 42.3% of players from Serie A. While at Sevilla, Monchi only signed 18.33% of players from La Liga.

If we look at players signed from the second division of the local countries, he took 3.85% from the Serie B in Italy and 11.67% from the Spanish Second Division respectively. Again, this shows how Monchi went for higher-profile players while at Roma and looked for undervalued players in Sevilla.

Another big change was the focus on the Dutch Eredivisie. In the five seasons we’ve analysed at Sevilla, Monchi didn’t buy any players from there, but in only two seasons at Roma, 11.54% of his signings came from the Netherlands. As we will see later, Monchi didn’t find as much value in this new market and some of the worst signings came from there.

He did maintain his interest in the English Premier League, the French Ligue 1 and Portuguese Liga NOS. The three competitions were the usual markets for both clubs. Surprisingly, Monchi didn’t focus a lot on the Spanish LaLiga while at Roma, bringing only Steven Nzonzi who he had previously bought for Sevilla. 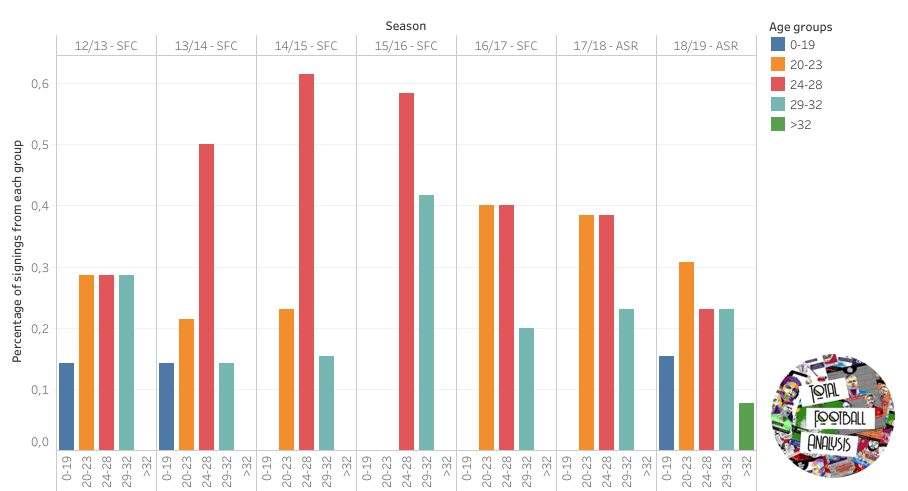 In the graph above we can see the age distribution in each of the seven seasons we are considering. At Sevilla, Monchi almost always focused on players reaching their peak (24-28 years old). That group was the most represented in each of the five seasons we’ve taken into account. At Roma, the age of the signings was much more spread out. In his first season, 24-28 was the most represented group tied with 20-23, but in the second one, 20-23 took the lead and Monchi also signed more players than ever from the under-19 and over-32 groups.

So instead of focusing on players reaching their peak who had gone mostly under the radar, Monchi focused on younger players while at Roma. This was a risky approach as it was different from what he had done before. This change towards younger players could have been one of the reasons why Roma’s performance in the second season was worse than in the previous ones.

In the graph below, we have the average percentage of players signed by Monchi in each age group both in Sevilla and Roma. It aims to show how an average season would look in terms of players taken from each age. Monchi changed from players reaching or at their peak to younger players. This high-risk high-reward transfer strategy didn’t go well for the Spanish sports director and he was fired from Roma before finishing his second season in Italy. 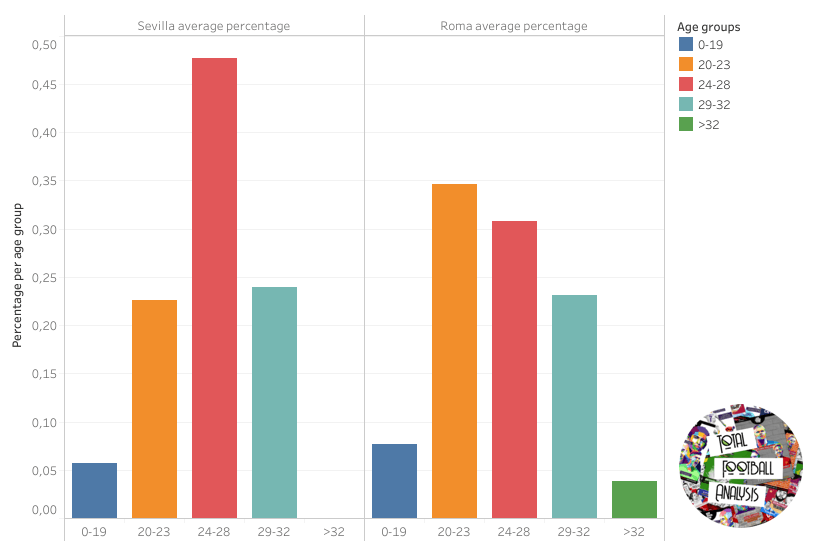 To evaluate how Monchi’s signings performed, we have used a very basic but powerful metric: percentage of minutes played while at the club. Ideally, an expensive signing should play most of the minutes, while a cheaper signing could be expected to be a backup option. But in the seven seasons we considered, this wasn’t the case for Monchi’s signings.

Below we can see a graph comparing the price of the players (excluding loans and free players) and the percentage of minutes they played while at Sevilla/Roma. In red we see players signed by Monchi for Roma and in blue the ones signed for Sevilla. The upper-left quadrant is where you don’t want to see anyone, as they are players with an above-average price (more than 7.63 million euros) who played below average minutes (39.24%). 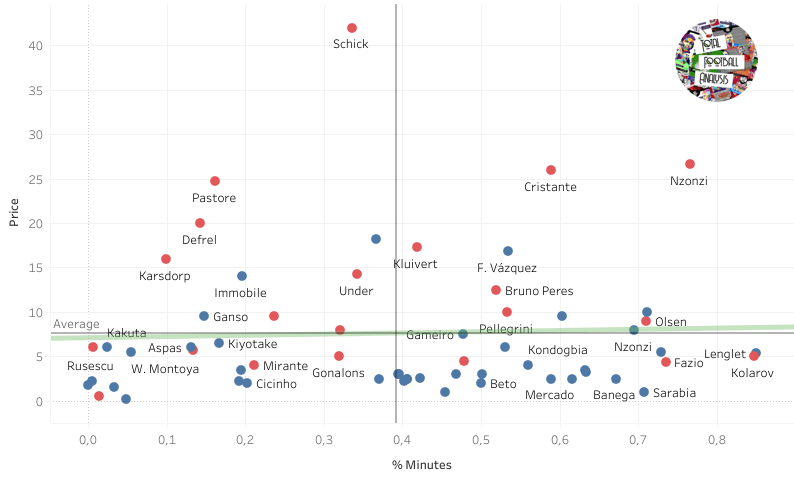 Even if we are taking five seasons at Sevilla and only two at Roma, most of the players in the upper-left quadrant are Roma players. Only Ciro Immobile, Joaquín Correa and Paulo Henrique Ganso could be considered very bad signings for Sevilla in this period, while Roma in only two seasons had Patrik Schick, Javier Pastore, Grégoire Defrel, Rick Karsdorp, Cengiz Ünder, Davide Santon and Juan Jesus in the same list.

On the opposite side, the lower right quadrant represents excellent signings. Those are players with a below-average price who played a higher than average percentage of minutes. This time, plenty of Sevilla players make the list, but only three Roma players: Aleksandar Kolarov, Federico Fazio and Nicolò Zaniolo.

The two quadrants left could be considered average signings. Those on the lower left quadrant were cheap but didn’t play much, which could mean they were supposed to play that role or they were simply bets that didn’t go very well, while the upper right quadrant shows players who were expected to play as they were expensive and fulfilled the expectations.

We have represented the correlation between price and percentage of played minutes with the green line. Curiously, the correlation is very low for Monchi’s signings, showing the price is a very bad predictor of players performances in his case. Part of this is because of his high spending at Roma on players who couldn’t make an impact. This reinforces what we suggested before: Monchi proved to be much better at signing lesser-known players for cheap fees than at making high-profile signings.

Coming back to the question we asked in the title of this analysis, we are in a position now to give some answers to explain why Monchi failed at Roma.

First of all, he changed the way he moved in the market. He moved away from buying players in their peak and chose younger and some older players instead. He also relied more on permanent transfers than on loans or free players. These reasons combined with adapting to the new league and exploring new markets (mostly the Dutch one) explain to a fair extent why Monchi couldn’t replicate his success from Sevilla at Roma as well.

Of course, many explanations don’t appear in this analysis and there are some cultural and performance issues statistics can’t explain. But with what we have seen in this analysis, we learn that success is not easily transferred from one club to another, especially when the clubs have different needs and goals. Had Roma known this, maybe they would have chosen a different sports director in the first place.