This UEFA Champions League match ended with a 0-0 draw. Both sides created some chances but weren’t of high quality in the open play. Sevilla’s set-pieces created great threat but they didn’t take their chance. 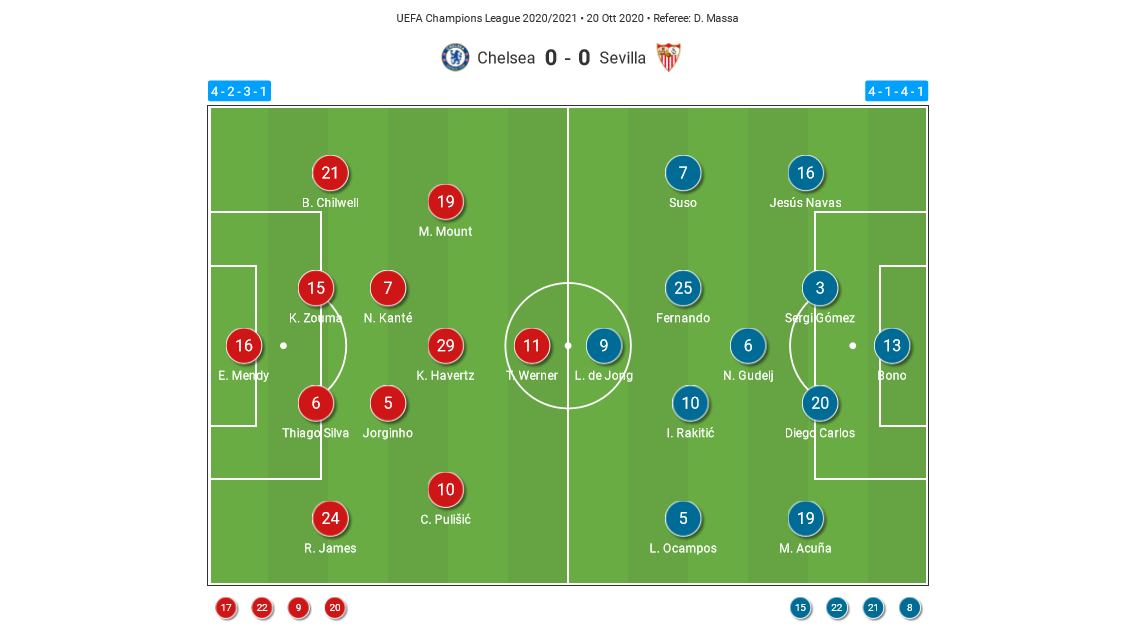 Sevilla in this match was the team that enjoyed more possession, however, their positional attack was not very effective. Their ball circulation was almost all around the block but wasn’t penetrating the block. This was because of the defensive work of Chelsea.

As Chelsea’s centre-back-duo would suffer from the exposure in the centre, due to their reckless decision making or mistakes (especially Zouma), it was crucial to “hide” the centre-back behind the midfield line. In this way the centre-backs would not have to step out to engage the on-ball opponent and it would be a more solid defensive line. Thus, Chelsea’s front and midfield players would cluster in the centre, preventing the Sevilla to break the lines in the centre.

As a result, Chelsea would force Sevilla to the outside in their high/mid-block defending, protecting the inside of the pitch. As Sevilla adopted a 4-2 playing out shape in the back, their pivots in the centre would be eliminated by the marking of Chelsea’s front players. Chelsea utilised a 4-2-3-1 shape in high-block. The weak side winger and the attacking midfielder would mark two pivots of Sevilla. Also, two pivots of Chelsea, serving as the balancing players, occupied central passing channels and prevented the opponent from passing forwards in the centre. In this way, they could prevent the centre being played through and hid the centre-backs.

In the above image, we could see the positioning of the high-block of Chelsea. In the centre, Havertz and the winger Pulisic were marking two pivots of Sevilla. Pulisic on this occasion didn’t take a balanced position where he could shadow Sevilla’s left-back and pivot at the same time. Instead, he came close to the centre to secure the central spaces. In the second midfield layer, Kanté and Jorginho eliminated any possible forward passing options in the centre. The lone striker Werner ran in curve to force the ball outside, and the ball was forced to the right-back.

Thus, the aim of this was to prevent Sevilla’s use of centre in the early stage. As the ball travelled to the flank area, for Chelsea’s side the optimal outcome was to force mistakes and recover high up the pitch, though it didn’t occur many times in this match. That was due to the pressure-resistant ability of two side-backs of Sevilla, but their options were usually the vertical winger on the flank. If Sevilla’s side-backs succeeded in picking wingers, progressing the ball to final third, Chelsea would still close the centre. And they would want the ball to be played on the flank, while they would seize the timing in recovering possession utilising doubling-up or the strong tackles of James/Chilwell. Ideally, this would launch the counter on the flank and we will discuss this in the next section. 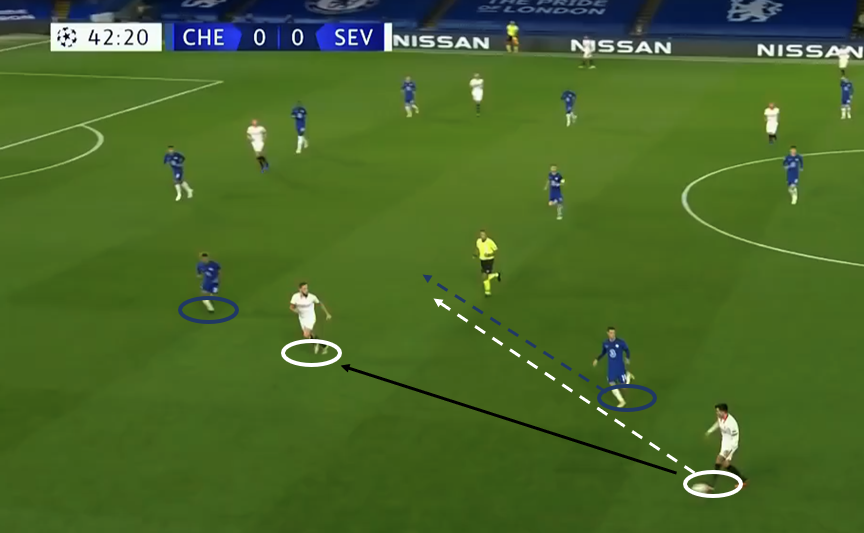 From the above image, Sevilla’s left-back was trying to pass and then underlap to attack the centre. In this scenario, Pulisic kept tracking him and closed the passing channel for the underlapping left-back. Also, James in this scenario prevented his matchup from turning, and he seized the timing to poked the ball from behind. This dispossession launched the counter from the flank and Pulisic’s later dribble created a foul.

However, if the possession couldn’t be recovered, Chelsea was not afraid of defending against crosses. With good physical centre-backs Silva and Zouma, their positioning and aerial ability enabled them to deal with the cross effective. Ideally, this would launch the counter in the centre, utilising passes of deep-lying playmaker Jorginho.
Hence, the principle of defending the centre, forcing to the outside had neutralised the attacking threat of Sevilla, as they were for most of the time, playing outside the block.

As we mentioned in the previous section, Chelsea was closing the centre and forcing Sevilla to the side. Ideally, the way of recovering for Chelsea would be: 1. recovering directly on the flank (doubling-up; good tackles etc.) or 2. intercepting/ clearing/ heading in the centre from the attempts to put the ball in the centre with crosses. Thus, this might lead to the two major methods in the counter: dribbling through the flank to progress, or use deep-lying playmaker/ number ten to start the attack.

For the first counter method, the logic behind it was the deployment of good on-the-ball progressor and make use of the space left by Sevilla’s full-backs in the attack. In particular, on the right flank Sevilla’s left-back Acuña attacked high and Chelsea’s left-winger Pulišić was incredible on the ball. In this way, Chelsea could effectively progress the ball to the final third. 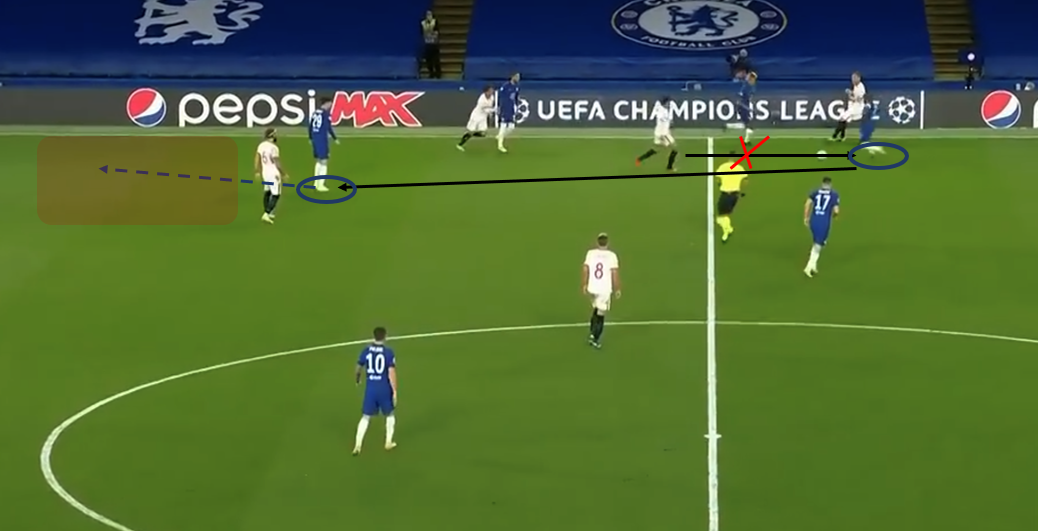 From the above image, Sevilla developed their attack on Chelsea’s right flank, whereas Kanté joined the defensive unit and dispossessed the opponent in this tight area. The ball was poked to the space left by Sevilla’s left-back Acuña, and in this case, Chelsea’s attacking midfielder Havertz who was also a good dribbler got the ball. Havertz utilised the space and brought the ball into an advanced area, bringing the play to the next phase.

For the second method, with a deep-lying playmaker like Jorginho, who could pass to create threat so long as he is facing forwards, and Werner who can run in behind to stretch the play/ provide as a final pass option, the play could be directed into the final phase and chances would be created.

From the above image, we could see that Sevilla tried to put the ball into the centre. That was when Jorginho seized the timing to surprise the opponent from behind and intercepted the ball. Then he could launch the counter in the centre.

He dribbled a few steps forwards, encountering no pressure from the opposition. On this occasion, Werner was also running at the shoulder of the defensive line. As Jorginho had an eye contact with Werner, Werner started to accelerate and received on behind the line. He therefore had a chance to score, but his form was not fit in this match. He wasted the chance.

Apart from their effective counterattack, Chelsea also had control over their positional play. Their attack was more effective as suggested by the xG (0.66-0.48). They could successfully play out from the back, breaking through the pressure from Sevilla’s 4-2 pressing shape.

From the above image, we could see that Havertz dropped to the right flank to receive from the right-back. We can see that two pivots of Chelsea pinned the opposition central midfielders. The pinning of the right-winger Mount had created enough space and time for Havertz to half-turn. Then Havertz utilised his dribbling skill to bring the ball into an advanced area and into the final phases as he broke the lines.
Chelsea utilised the attacking midfielder’s movement as a solution in the first phase. In the final phases, attacking midfielder Havertz’s off-the-ball movement was also important to create an opening for other teammates to create a threat.

From the above image, we could see that Havertz went towards a high position at the shoulder of the opponent’s defensive line. As Sevilla’s pivot Gudelj tracked him, zone 14 was vacated. Then Werner dropped to the zone 14, later receiving from the flank. He was therefore having time and space to shoot from outside the box, hitting the target.

Sevilla’s possible solution for the next matchup

Sevilla has tall and physique player de Jong, who is good at playing as the target man. However, in this match, Sevilla mostly played short and abandoned the direct play to him. It is suggested that de Jong is deployed as the target man, with Munir along with his side to receive from the lay-off or flick-on. This is a good way to escape the lines and direct hit the centre.
What’s more, if Silva is deployed in the next match, some run-in-behind when Chelsea defends in the high block on his side is suggested. He’s not a pacey defender as he is now 36 years old, and it’s worth trying hitting the space behind him.

Both teams don’t have very good results at the beginning of their respective leagues (La Liga and English Premier League). As their form gradually become better, we shall expect more intriguing tactics and performance from both teams in their next matchup.