Everton 2020/21: The specific concepts around the Richarlison role – scout report

Everton’s stunning performance surprises every team in the English Premier League. They are now ranked 1st on the table. Richarlison is one of the contributors to this. He now scores four goals with one assist in six games, helping the team reach the top. His role under Carlos Ancelotti is quite intriguing and we’ll dissect it in this scout report.

False winger and a real finisher at half-spaces 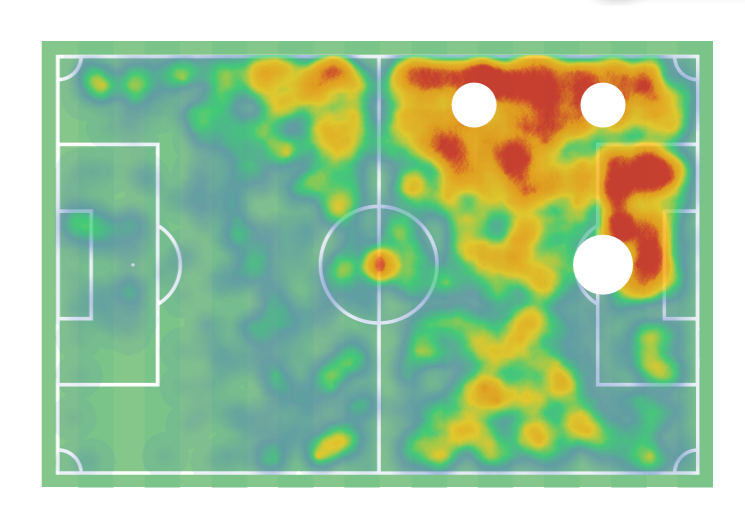 When the play comes into the final stages, he will initially position himself at the shoulder of the defensive line. Then, he will recognise the cue for releasing the final pass and run in behind the defensive line, serving as a direct final pass option. As he latches onto the pass, he will have the chance to directly finish and score. In this case, therefore, the front line of Everton will encompass two strikers: Richarlison and Dominic Calvert- Lewin. Thus, Richarlison is a false winger and an actual striker on the left half-space along with Calvert-Lewin. This can be supported by the average position map against West Ham United: 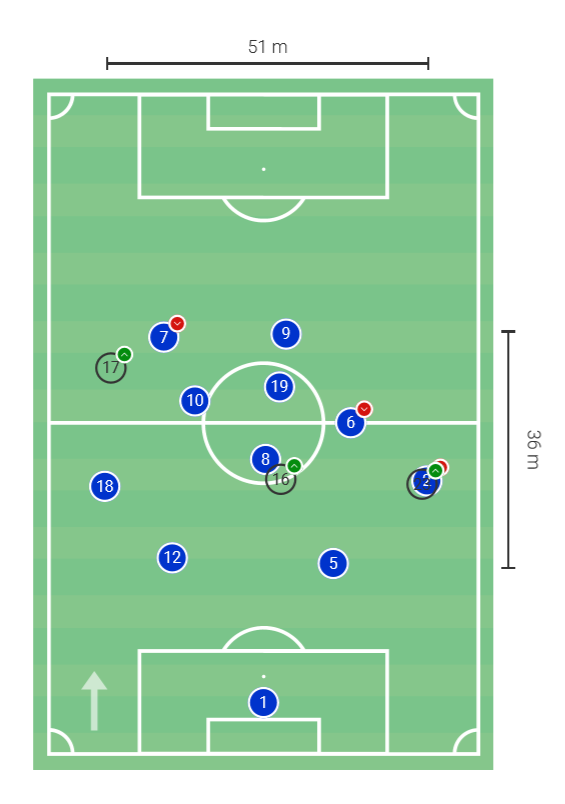 From the above image, we shall see that Richarlison’s average position was almost in the same horizontal line with the striker Calvert-Lewin. Hence, he was like a striker/finisher in this case rather than functioning as a winger with responsibilities like crossing or linking-play.

There are two prerequisites for such deployment of Richarlison. Firstly, Richarlison’s traits and abilities support him as a finisher. Richarlison’s finishing ability is quite fine as he manages to score 4 goals with the xG of 2.59. This means that he scores more than expected and the efficiency of his finishing is decent. Furthermore, Richarlison is pacey enough and his acceleration is quite decent, which enables him to gain the position that is more open and more effective for the technique execution. Thus, he possesses the qualities of being a good finisher whereas and ball-feeder is needed.

Secondly, with the likes of former Real Madrid player James Rodríguez joining the team, Everton is equipped with a left-footed skilful final-passer. James is deployed as the right-winger in 1-4-3-3 system on the paper, nevertheless, he will come more into the central spaces, acting as a number ten. This is also supported by the average position map above.
As he drifts into the central spaces, James will manage to receive facing forwards or in open body shape, hitting the final passes of extremely high quality under pressure. Only one striker Calvert-Lewin might not be providing the best passing angle for the high-quality final pass. Therefore, a second striker, Richarlison, comes in to atone for a better passing angle and one more final pass option.

Thus, this chemistry works as James already provided one assist for Richarlison’s goals. And with the deployment like this, the offensive system for Everton will be more like a 1-4-3-1-2 as James comes inside and Richarlison more like a finisher. 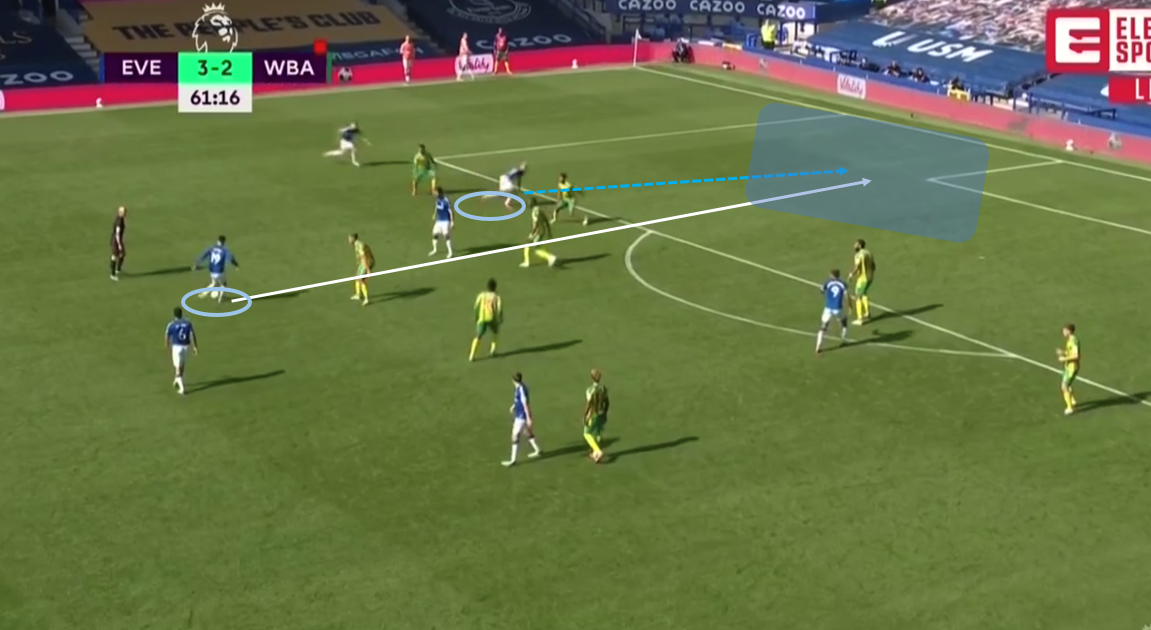 Above is an example of the illustration. James above was facing forwards but his direct presser wasn’t getting close enough to exert effective pressure. Therefore, James manipulated the defence with his accurate and good quality final pass as Richarlison, starting from the shoulder of the defensive line on the half-space, was running in behind the line. James’ chipping the ball was towards the edge of the six-yard box while the goalkeeper couldn’t take the risk of coming out to pick the ball. Richarlison then comfortably brought down the chip with his left. He could finish and scored but he picked Calvert-Lewin in a better position, and Calvert-Lewin made the goal.

In the last section, we’ve already talked about Richarlison’s running-in-behind behaviour. This movement could also have another function- that is to potentially stretch the defensive line vertically/diagonally. On the same note, space between lines can be created. Also, an open corridor on the flank can be created for the left-back, usually Lucas Digne. If James decided that the gaps for Richarlison to finish directly are too tight, he might then alter to pick Digne as a solution to manipulate the defenders to his advantage. 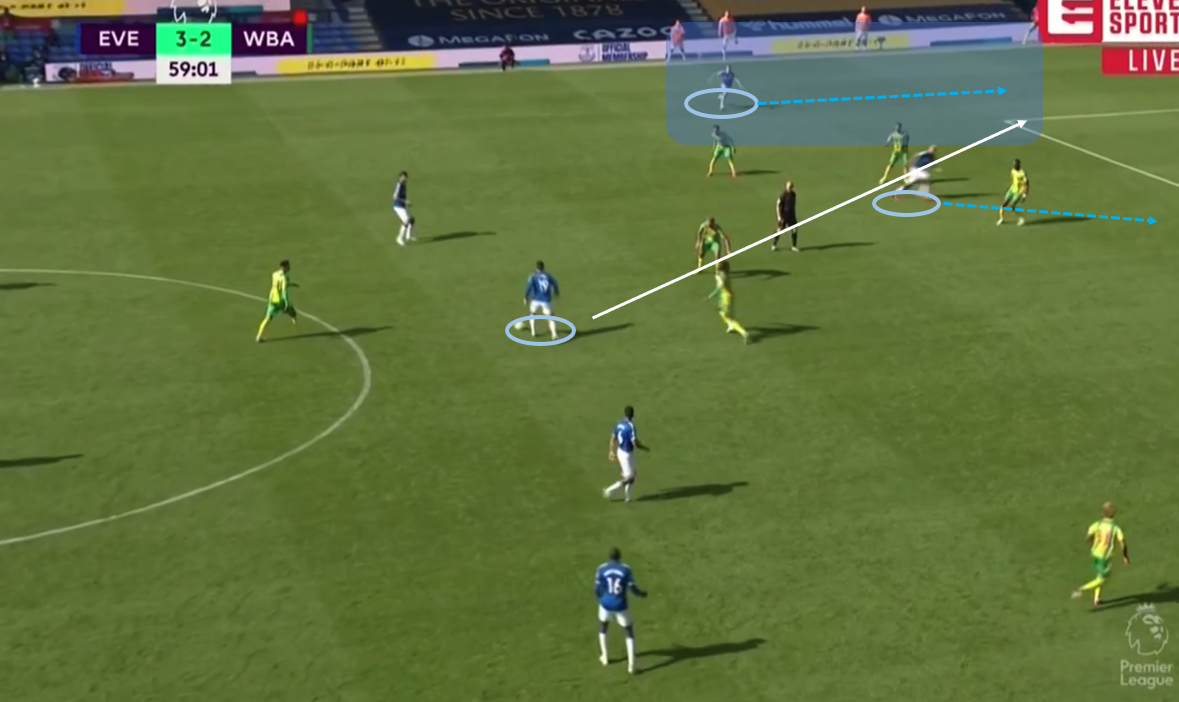 From the above image, James was possessing the ball and ready to bring the play to the final stages. Richarlison was cued and ran diagonally in behind. He drew the attention of both the central defender and the full-back. The full-back was pinned in the half-space as he decided to close the gap for Richarlison to utilise. Therefore, a huge opening on the flank corridor emerged for Digne to exploit as James picked him. Digne then had time and space to hit a cross of high-quality.

We’ve shed light on the actual finisher role of Richarlison. We keep the title of the false winger instead of ticking it out. Now, we’ll delve into the content that he functions as the “winger” to provide width in the building-up stage.

This is created by the different positioning of Richarlison in different stages. We’ve already mentioned Richarlison’s positioning and movement in the final stages. In the build-up stage, Richarlison will occupy the sideline to provide width in front while the full-back on this occasion will position in the half-space for ball-circulation.

Thus, apart from stretching vertically, the positioning of Richarlison could potentially stretch the opposition backline horizontally and force gaps between full-back and centre-back. Then Digne could go up and underlap to exploit this gap. 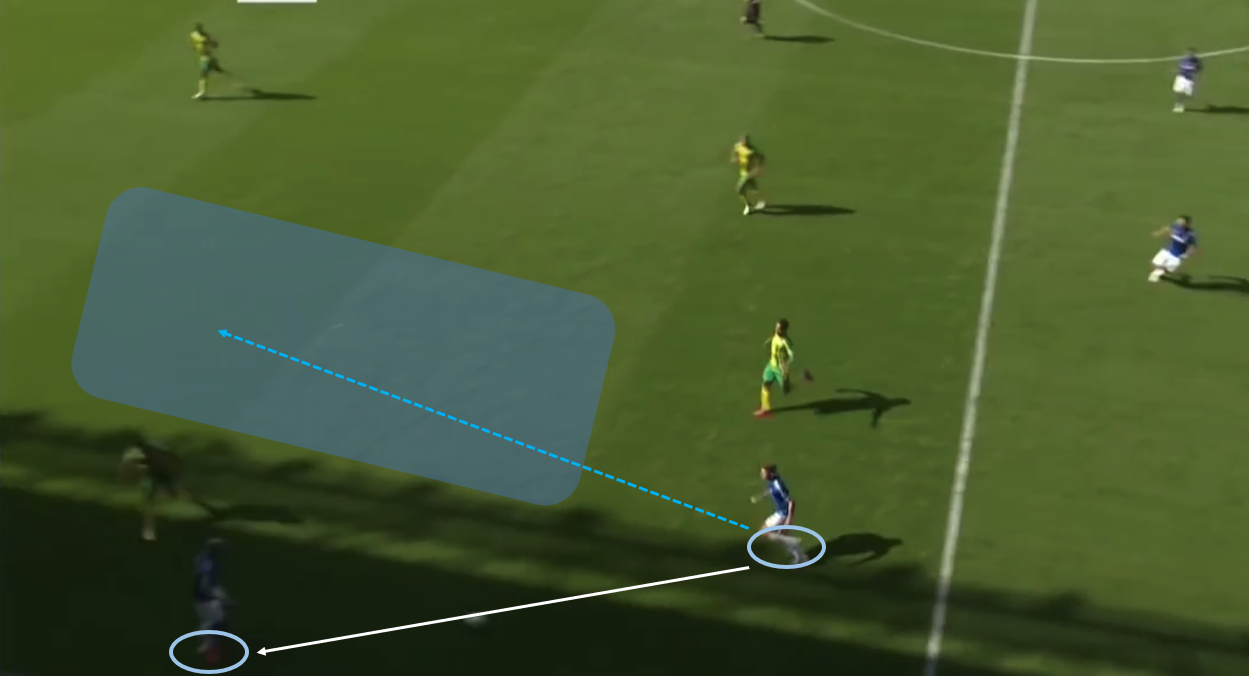 Apart from his off-the-ball roles, his dribbling technique is good as he has 8.78 dribbles per 90 with the success rate of 59.09%.

His dribbling ability provides Everton with individual actions’ possibility in the counter and positional attack. With his decent pace, he runs to provide height in offensive transition and receives the ball in the high line to progress the play. Then he will try to carry the ball straight into the box. On top of this, in positional attack, his on-the-ball progression would directly bring the ball into the advanced area. Normally he’ll start from a deeper and wider position on the pitch. Then he’ll carry the ball into the dangerous area. This serves as a crucial solution when the pattern play can’t progress the play effectively. Also, his aggressive runs at defence will entice the opposition to step out, freeing more spaces for his teammates. 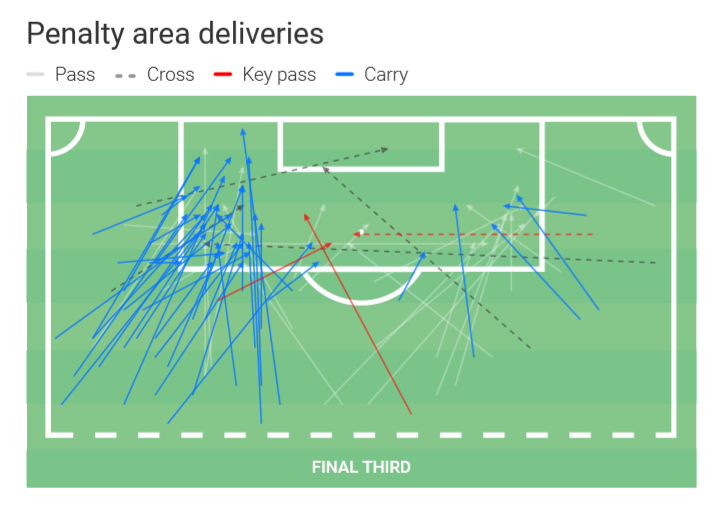 As you can see from the above penalty area deliveries graph, on the left half-space, he carries a lot of ball from the final third into the box from positional attack and counterattack. Now we’ll examine two examples of his progressive runs. 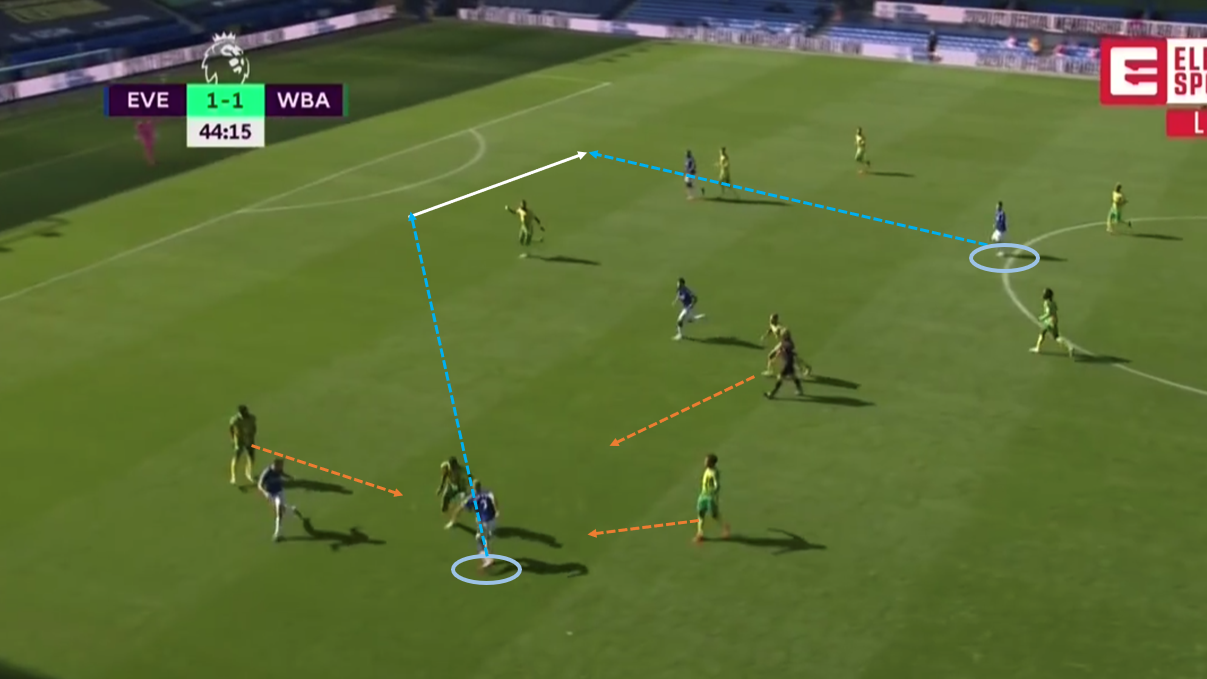 From the above image, in the positional attack, Richarlison received the ball facing forwards. He decided to challenge his defenders and also managed to beat three players who stepped up to restrict him, carrying the ball into the zone 14. With a crowd of defenders trying to close him down, space for James appeared. Later, Richarlison picked James who was unmarked and facing forwards. James shot and scored.

Another example is from Everton’s counterattack. Richarlison ran to provide height in offensive transition. He latched onto the ball and was determined to run at defenders with his dribble. He utilised his pace to bring the play into the box and 1v1 against the defender, creating a corner on this occasion.

Competing with Liverpool and Manchester City, Everton seems to have a good head start. With the likes of Richarlison, we shall expect Everton to maintain their form for quite a long time.