Manchester City vs Leicester City was without doubt the highlight of this week’s premier league. Second-placed Leicester and third-placed Manchester City may be a lot of points behind league leaders Liverpool, but nonetheless this clash promised to be a great one. While Brandan Rodgers and his team perform surprisingly well throughout this season, Manchester City are not in their peak right now. Thus, one side wanted to show that they deserve to be in the top 3, while the other one was eager to prove that they are still the benchmark. In the end, Pep Guardiola’s team took the victory thanks to a dominant performance. The expected goals figures of 4.10 to 0.61 in favour of Manchester City underline that the 3-1 win was well deserved. Our tactical analysis will explain, how City were able to overcome Leicester and beat them convincingly. 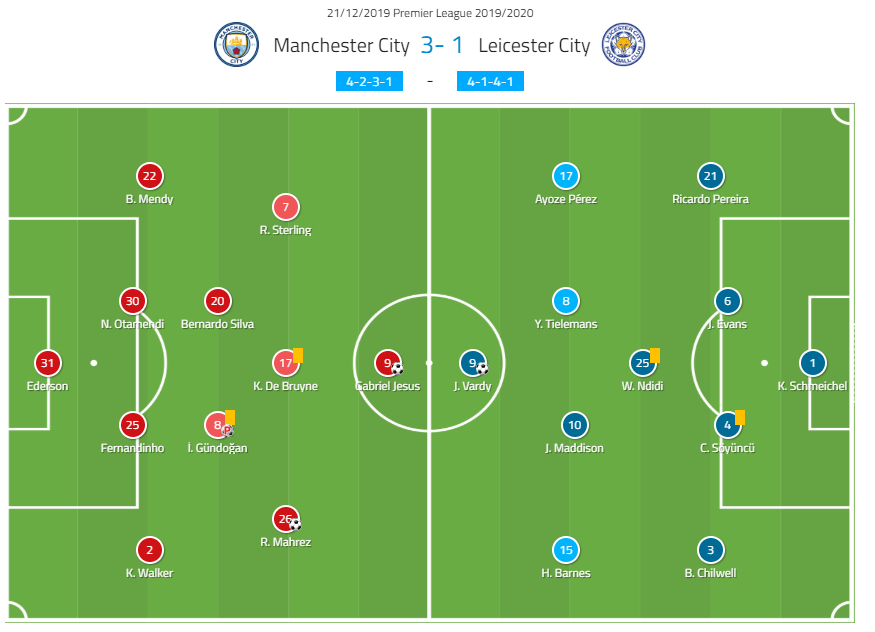 Somewhat surprisingly, Manchester City played in a 4-2-3-1 with Bernardo Silva alongside Ilkay Gündoğan in the defensive midfield position. Up-front Gabriel Jesus played again instead of Sergio Agüero. Apart from that, both teams started as expected. Brandan Rodgers used his preferred 4-1-4-1 formation. 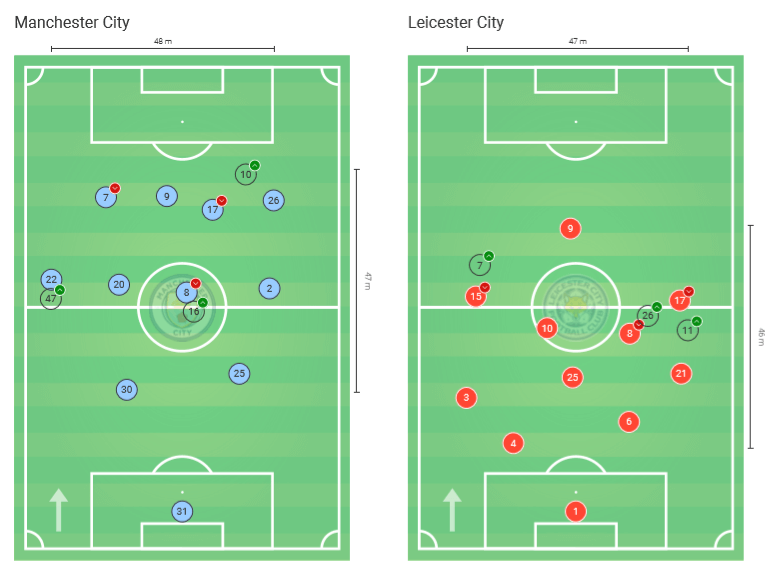 Looking at both teams average positions, we see that both vertical and horizontal compactness are rather similar, at least on a numerical basis, for both teams. While Leicester City’s 4-1-4-1 is clearly recognizable, Manchester City’s formation rather looks like a 2-4-4. In the following, we will analyse this.

The peculiar role of Bernardo Silva and Kyle Walker

Offensively, Manchester City played a flexible system which had a resemblance to a 2-3-5 formation. Most of the time, Benjamin Mendy would bomb down on the left wing and play like a winger. As he had to do more defensive work than an average winger, his average position is a bit deeper than one would think after seeing him in action offensively.

When Mendy pushed forward, Bernardo Silva used the left half-space to organize the game from there.

The image above is a perfect example of City’s positioning in this game. Obviously, Guardiola thought that starting attacks from the left half-space would favour his team best in this game. Often enough, Silva would play the ball out to Mendy in order to push Leicester into that space. Mendy would then play back to Silva or Nicolás Otamendi, so that Manchester City could switch sides and attack through the other wing. 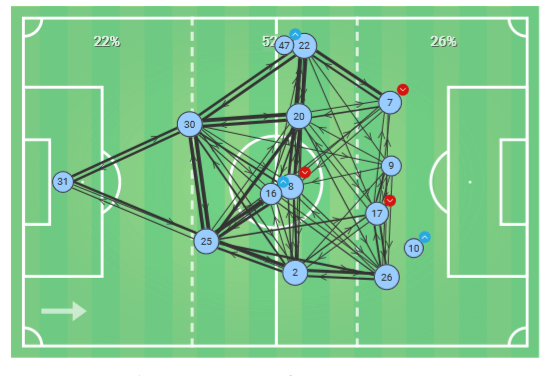 City’s passing map also shows that the strongest links were between the trio Silva, Mendy and Otamendi. Kyle Walker’s inverted positioned was also helpful in that sense, as Silva could focus on the left half-space, while Gündoğan holds position in the centre. Also, this enabled Kevin de Bruyne to push higher. 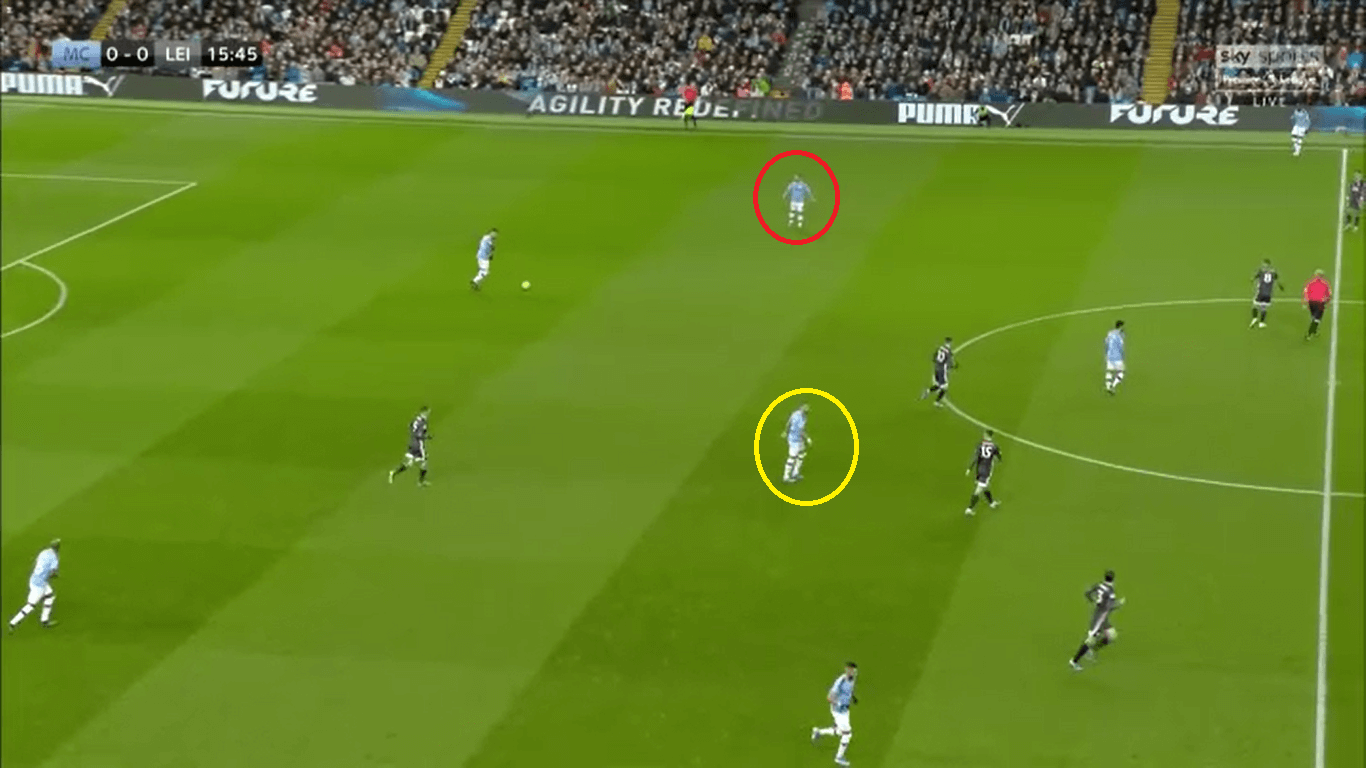 In some instances, like in the image above, City drove this tactical approach to the limit. Bernardo Silva fell so much back that it almost seemed like City would use a back three in the build-up. As we can see in the image, he had then tons of space to initiate the build-up. Looking at Kyle Walker, he also shifted extremely in this situation, being almost in the centre of the pitch. 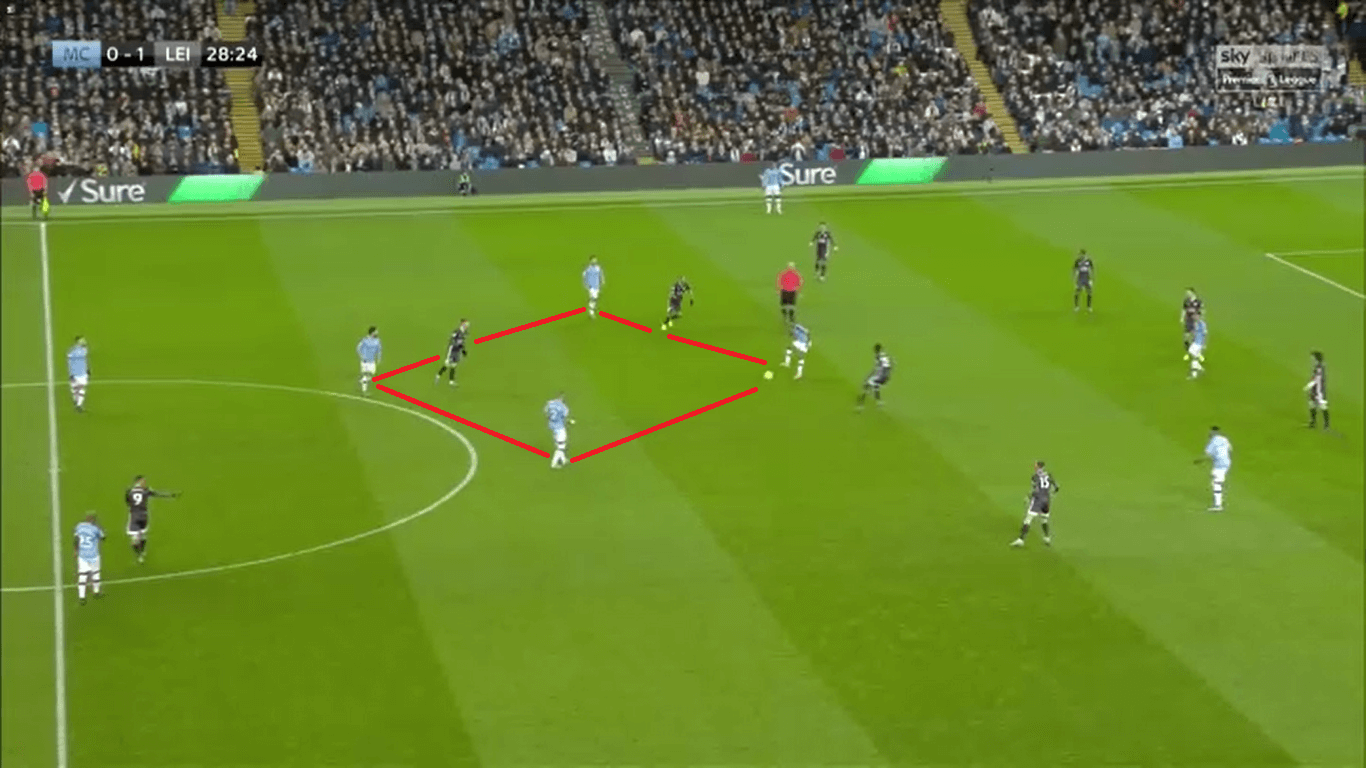 For Leicester, it was extremely difficult to defend against this fluid attacking pattern. Take a look at the image above as an example. With Mendy out wide, Raheem Sterling was able to occupy the centre, creating a diamond with Gündoğan, Walker and Silva. With quick, short passes, City wanted to attract Leicester, so that hole in the defence would be created. In order to avoid that, Leicester had to stay passive, allowing City to dominate the midfield. 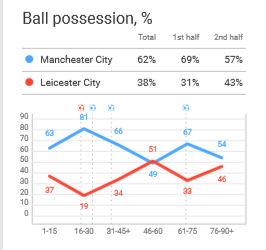 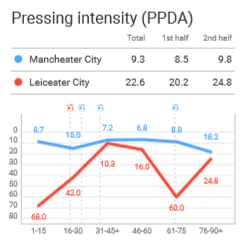 However, in total, they were forced to stay passive, which resulted in a relatively low PPDA score of 22.6. PPDA measures the passes of the opponent per defensive action, meaning roughly that Leicester on average allowed Manchester City 22.6 passes in a row before being able to intercept. 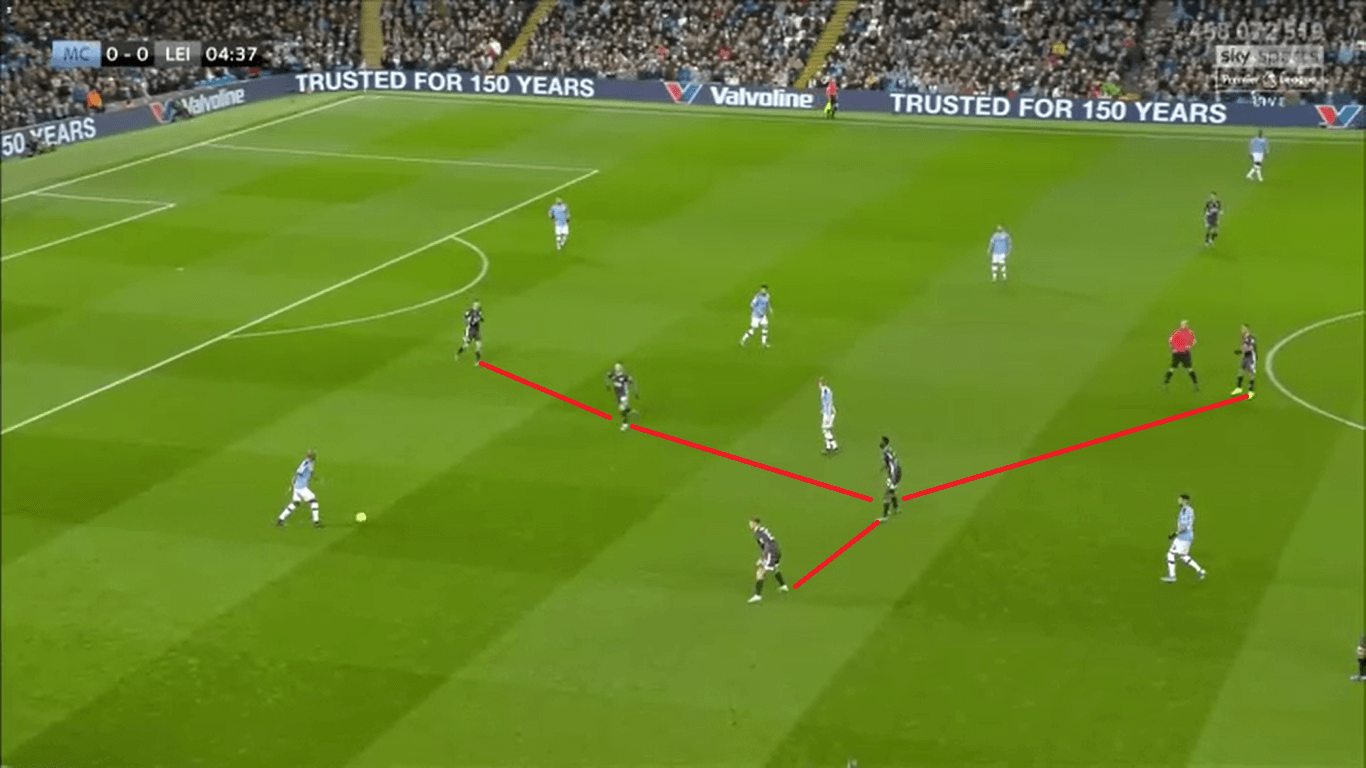 When Leicester tried to press higher, it was still a passive form of press. They would try to lead the build-up onto one wing and cut the ball-handler from the rest of the team. While it seems indeed risky for Fernandinho to play the ball to the left wing, he is able to solve this situation turning back to the goalkeeper Ederson. There is no immediate pressure on Fernandinho, which makes it rather easy for Manchester City to wiggle out.

Guardiola’s plan in the build-up also involved an idea for the final third of the pitch. In one of the previous images, we could already see Riyad Mahrez being wide open on the right wing. This was part of the plan, as Manchester City tried to start the attack on the left wing to push Leicester there and then switch to Mahrez who would then have a lot of empty space in front of him. An example can be seen in the image below where Otamendi plays a long diagonal ball. 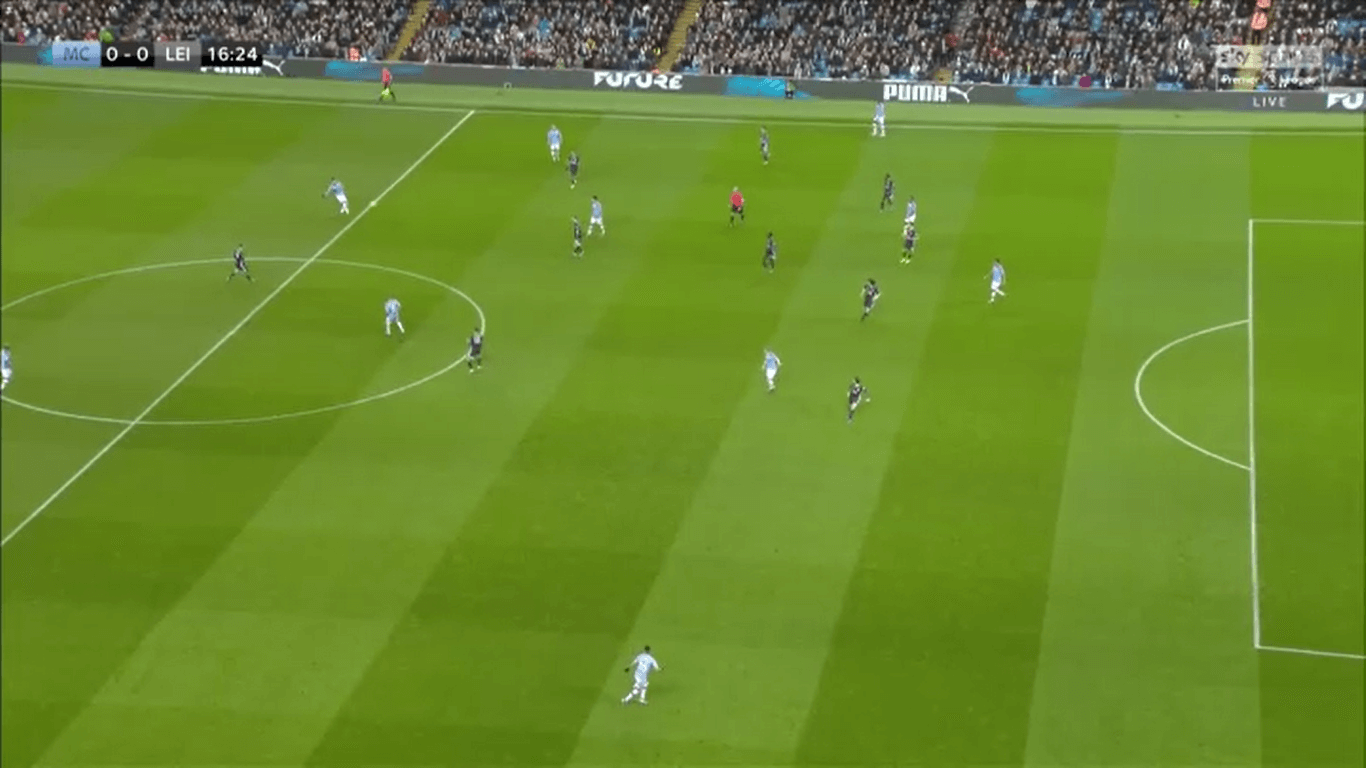 Most of the time, the resulting position took a similar shape like in the following image. 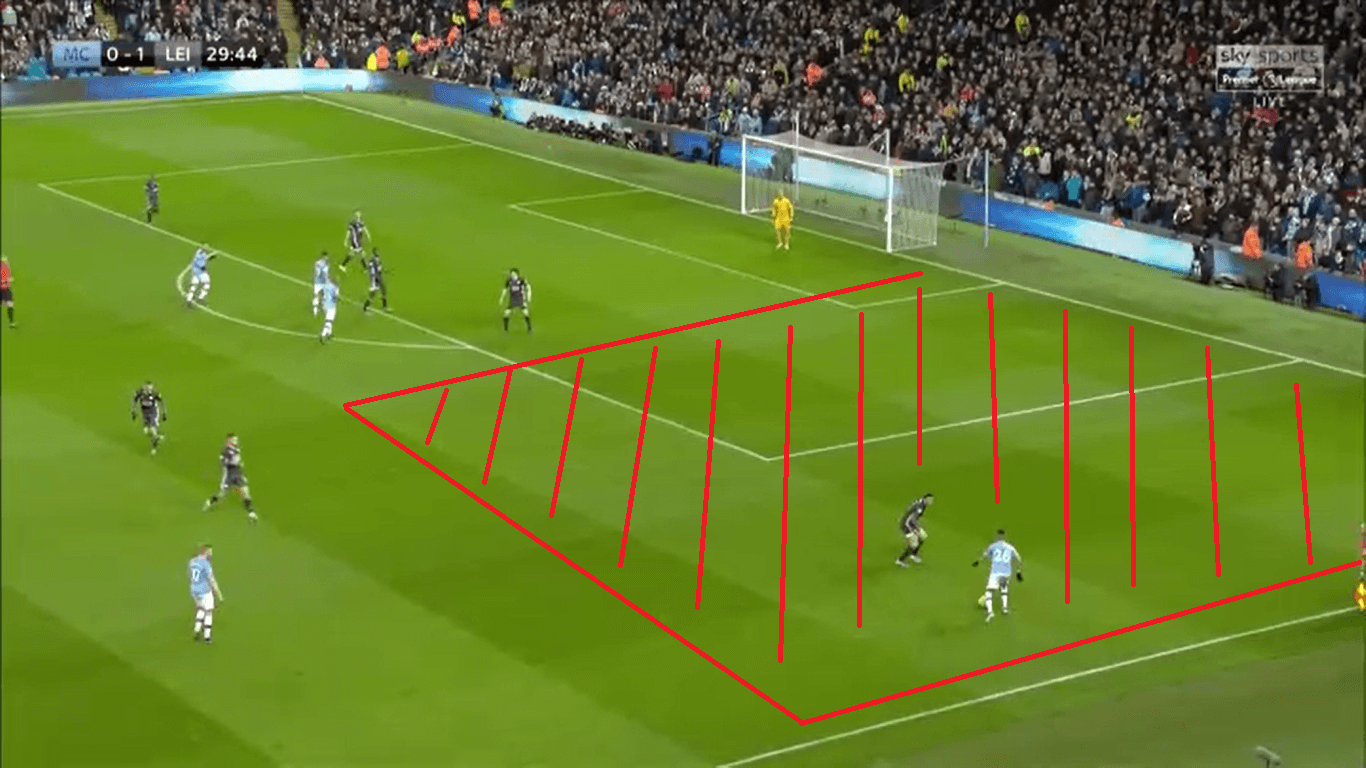 Mahrez had a lot of one on one positions where he could use his speed and dribbling skills against Ben Chilwell. With ten dribbles during the game, he was the leader in that category. Seven of those ten dribbles were successful, which underlines that this plan made sense. Furthermore, the 1-1 equalizer was scored from such a one-on-one dribble on the wing. Mahrez was able to cut inside and score the goal. 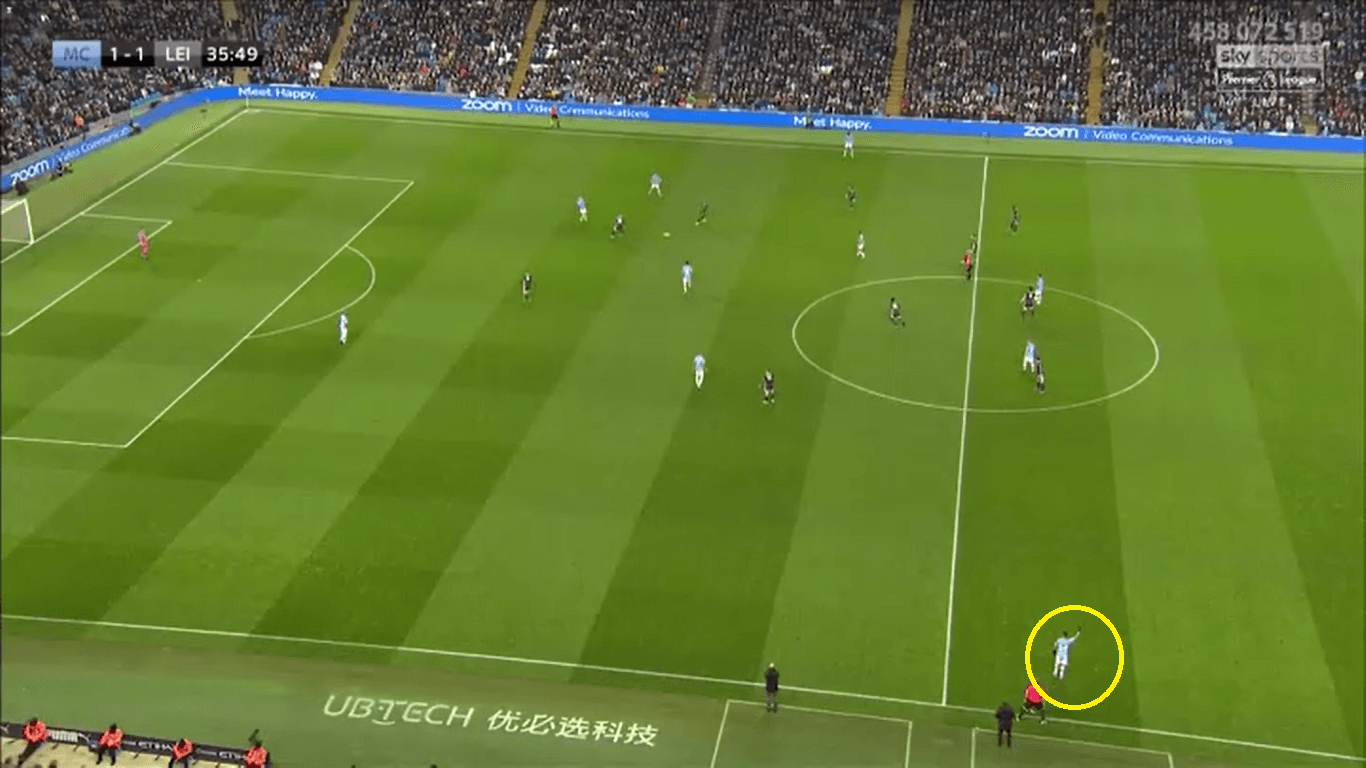 There were also some occasions with City not using Mahrez, even though he was wide open still. Here, Otamendi prefers to play with Sterling through the centre, who also has a lot of space by the way. For Leicester, this made things worse, as Chilwell had to consider both options nonstop. Otherwise, he would have made the run out to the wing just automatically, but this was impossible as City varied with their attacking preferences. 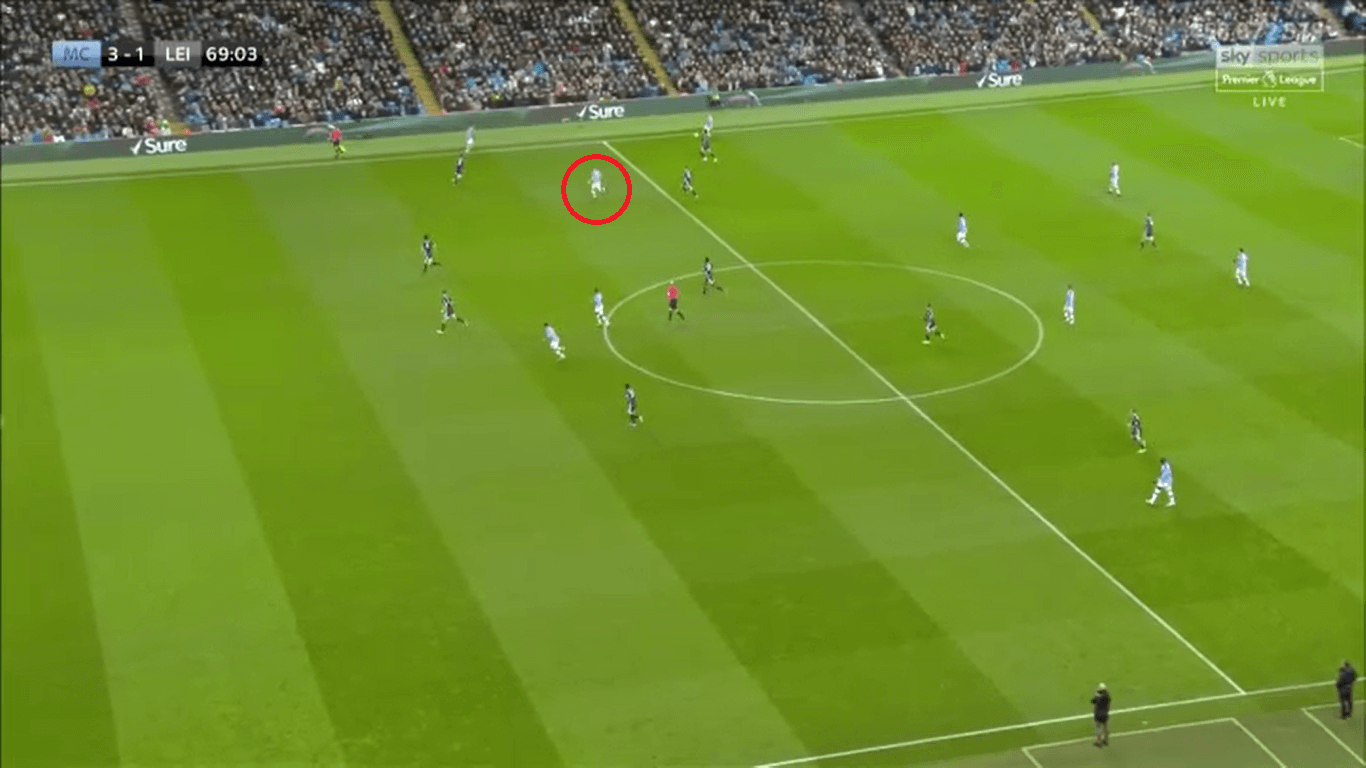 City’s third goal as an example was scored thanks to a pass coming from the wing into the half-space to Kevin de Bruyne. While this seemed contrary to the build-up patterns, the opportunity was there as de Bruyne had some space and could beat defender Çağlar Söyüncü to then cross the ball inside.

Leicester were dangerous through counterattacks

While we spoke a lot of Manchester City’s attacking patterns, there remains still the question about Leicester’s attacking strategy. Unsurprisingly, the Foxes tried their luck with counterattacks. They were actually quite dangerous and managed to get the lead with a great attack via Jamie Vardy. 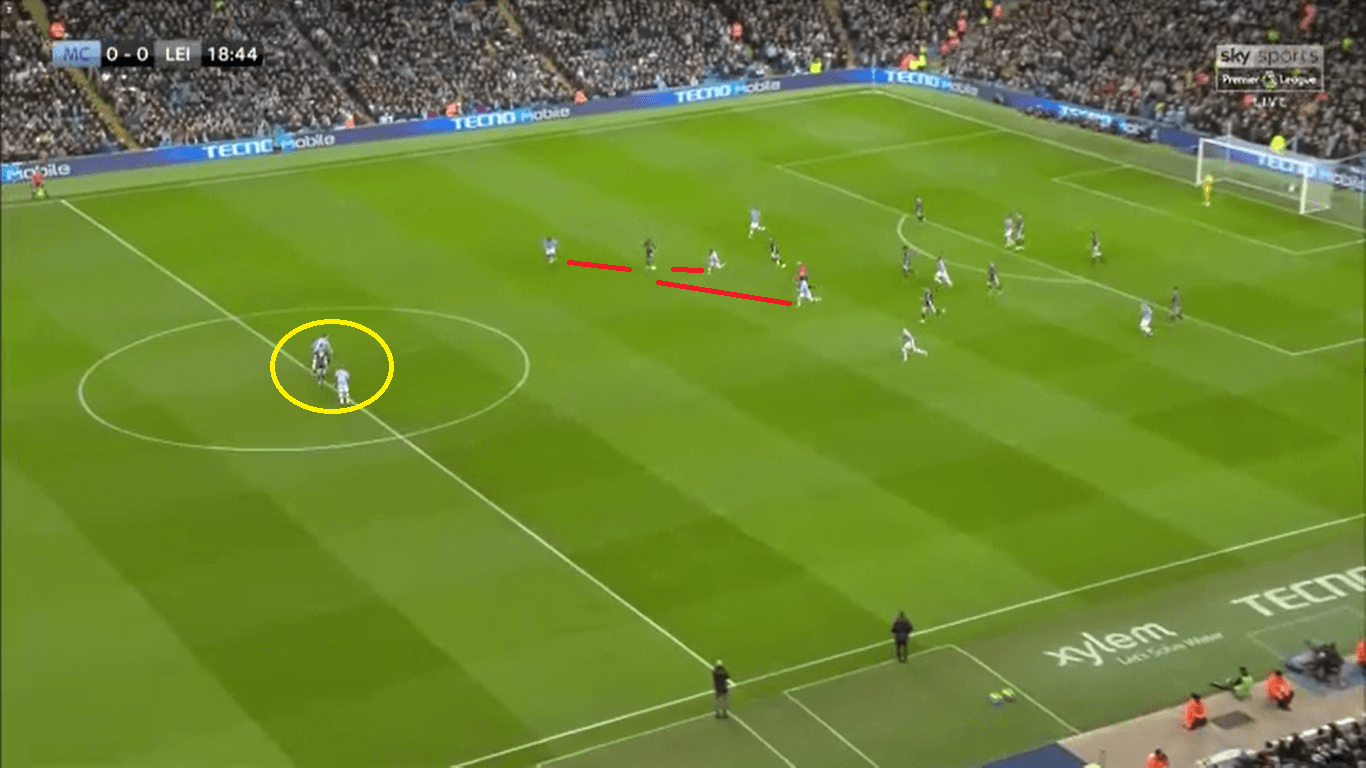 Manchester City’s rest defence constantly consisted of Otamendi and Fernandinho, who both cannot compete with Vardy in terms of speed. 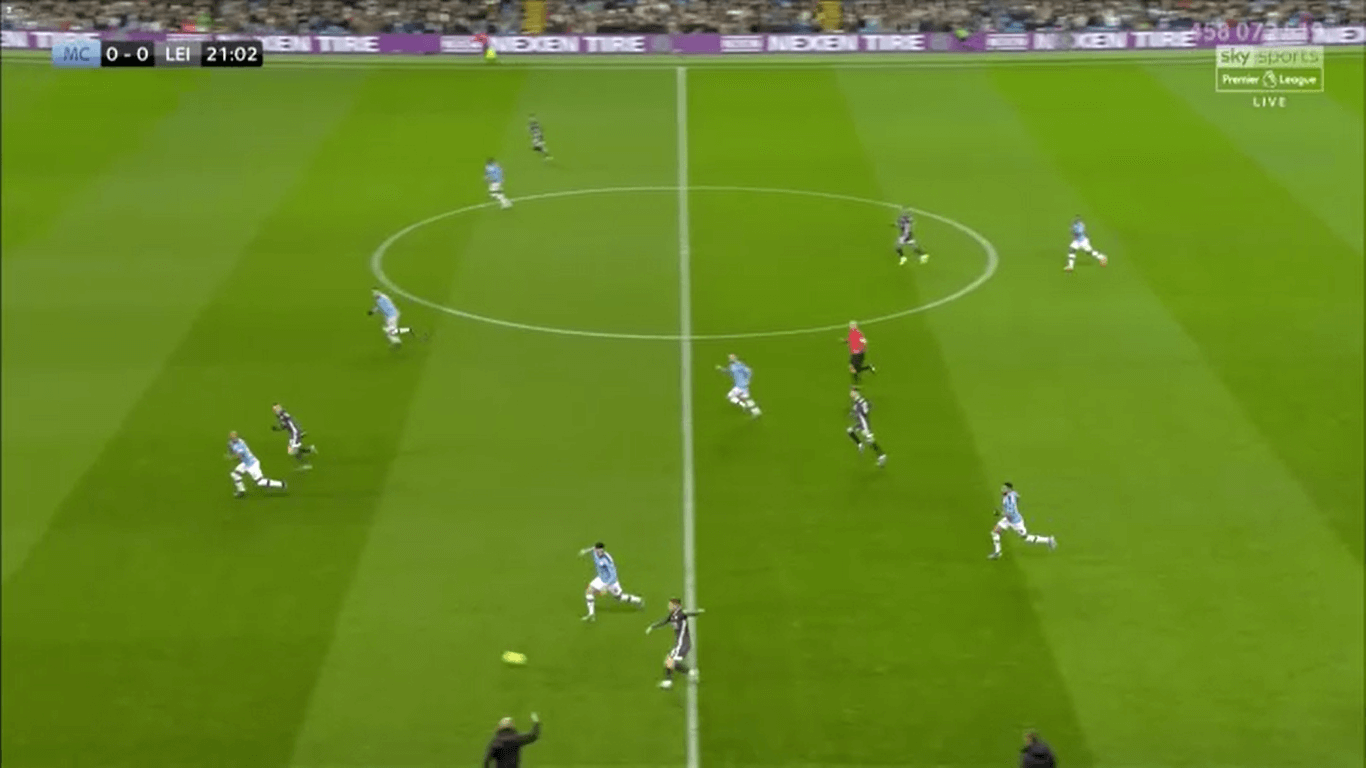 Thus, such passes like here behind the backline were very promising. Vardy was able to beat Fernandinho and kept a cool head when he faced Ederson, scoring the lead for Leicester. 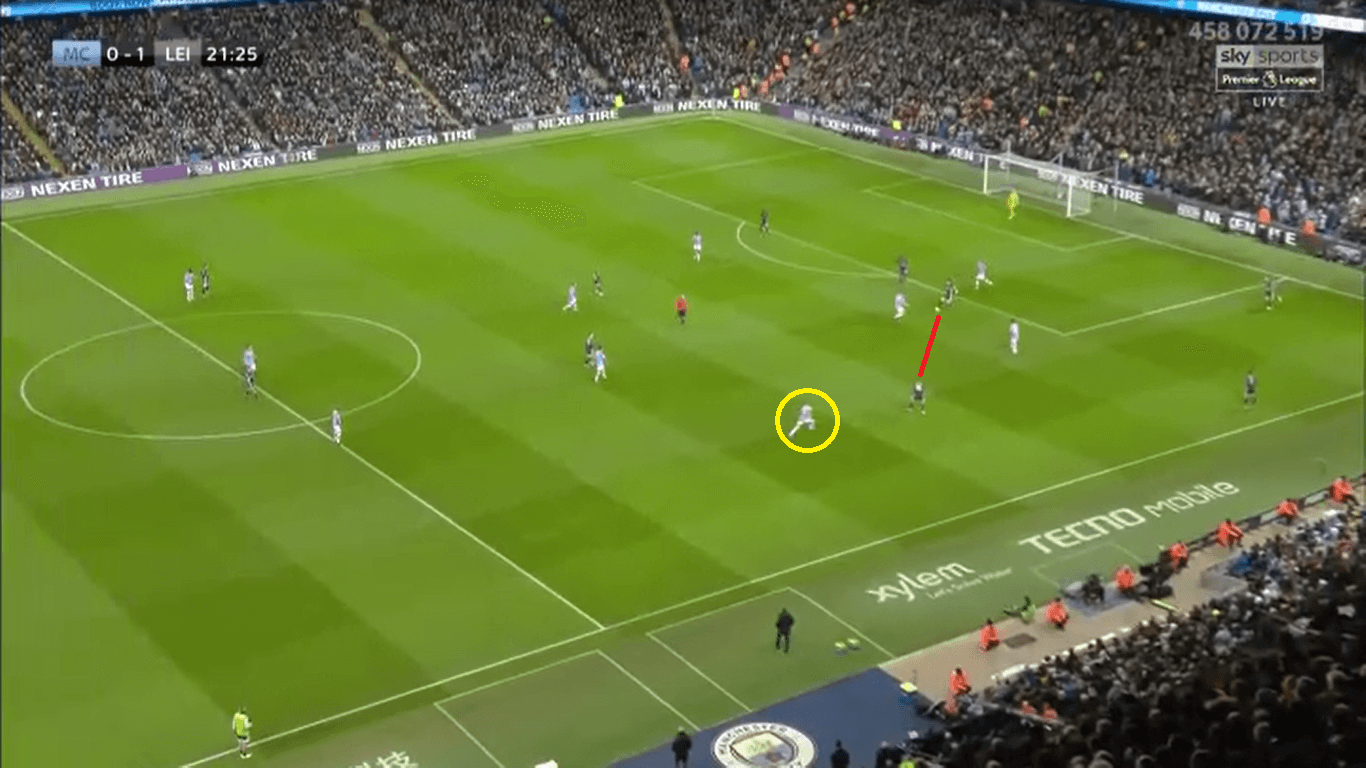 Looking at the emergence of the goal, we see that Walker was able to counter-press successfully after City had lost the ball. 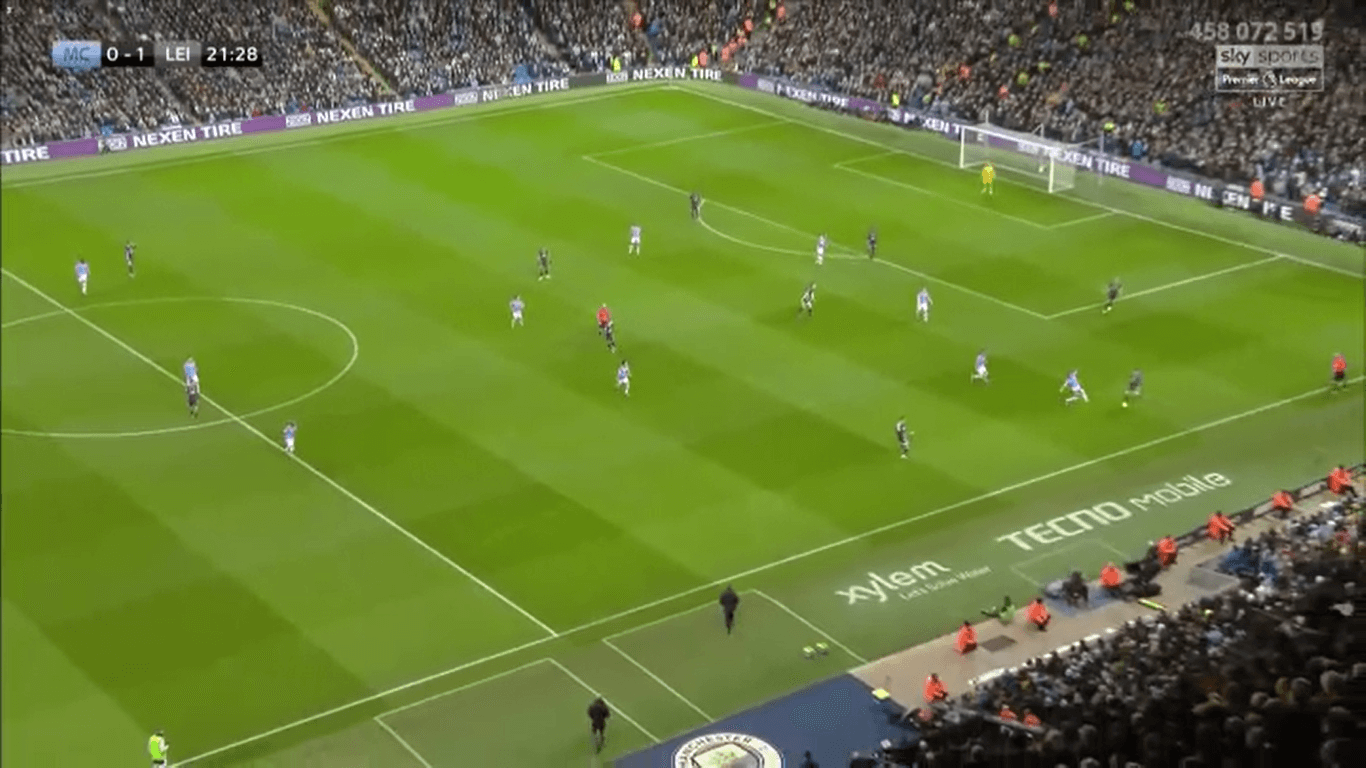 However, Walker’s first touch was bad, so he lost the ball again. From there on, the pass long line was not preventable. Gündoğan could have pushed more aggressively to the wing, but nonetheless Leicester just played it with fantastic speed and precision.

Manchester City showed their strength and proved that they are still one of the best teams in Europe. Pep Guardiola had the perfect gameplan for this clash and the players made his tactics work. Brandan Rodgers still has some things to do in order to get his team onto the top level, even though they are playing a great season nonetheless. The following weeks will show where their journey will lead them to.