Former Barcelona player Giovanni Van Bronckhorst became the manager of Guangzhou R&F this season. This was surprising news as he was considered to be the manager of Manchester City after Pep Guardiola. He, in Chinese Super League, encountered former Liverpool manager Rafael Benítez, who was the manager of Dalian Professional. Their tactical combat surely drew the attention of the whole world.

In this tactical analysis, we shall examine the style of play of both teams. We’ll focus on the main stages that affected the game in this analysis. 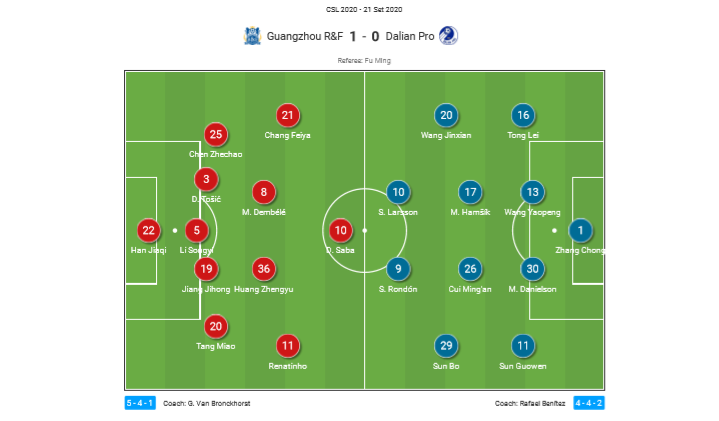 In this match, Dalian had more attacks than R&F (62-30). With R&F sitting back to mid/low-block to meet the opponent, Dalian usually started the attack in the middle third of the pitch as they didn’t encounter pressure in the first stages. In their offensive play for the first 60 minutes, Dalian had some distinct principles, which are creating an overload in the centre and isolating the flank.

With their original formation of 1-4-4-2, the second striker Larsson stayed between lines. One winger would shift inside between lines to stay close with the two strikers, which would normally be Sun Bo. The other winger Wang Jinxian would stay in the opposite half-flank, keeping an appropriate distance from other attackers. With R&F’s defensive formation of 1-5-4-1, Dalian could create overload between lines in the centre.

Above is the manifestation of the offensive principles. Dalian was easy to carry the ball to the opponent’s half and R&F was sitting in mid-block to meet them. Left-winger Sun stayed in the centre between lines, and Larsson also stayed between lines. Right-winger Wang stayed in the half-flank. Two wingers’ position forced R&F’s defensive line to cluster in the centre. This freed the space on the flanks, where two full-backs could utilise the isolation.

There’s where Dalian’s attack encountered problems. Their final passes were not effective due to various reasons. If the final passes were the crosses aiming to find Rondón in the centre of the box, though the isolation in the flank would improve the quality of the pass, there were three tall centre-backs of R&F to go for the aerial duels. So Rondón wasn’t taking advantage in this and the accuracy for Dalian’s ineffective crosses was only 36%.

On top of this, if wingers decided to take the first touch inside, there wasn’t enough off-the-ball movement from attackers. There was no running in behind from the attackers and therefore, no final pass option to pick for the ball carrier. And this forced the ball carrier to shoot from distance.

As you can see from above, the inverted right-winger Wang took the first touch inside. However, there were no attackers who ran in behind to provide as the final pass option, as well as stretching the line. This was due to that Rondón was a holding-up type striker and Larsson was more willing to operate the ball between lines. Thus, Wang had no further choice to develop the play into the finishing stage, and he had to pass back to recycle possession.

The problems became apparent in the first half. In the second half, there were some changes in their offensive tactics. Firstly, the way they crossed altered, as they released more ground pass crosses to find teammates between lines in the box. Secondly, they had more crosses aiming for the far post to escape the tall three-back in the centre. Benítez sent Emmanuel Boateng as the right-winger after 67 minutes and he positioned himself at the blind side of the defensive line. He would be picked at the far post area and blindside to flick the ball to the teammates between lines, creating high-quality finishing chances.

The above is an example of the changes in the second half. Boateng was on the blindside and far post area aimed for the cross. The cross found him accurately and escaped the tall three-back. Boateng laid the ball off to the holding zone where Zheng Long was rushing onto it. Zheng was then unmarked in zone 14 and finished on target, forcing the goalkeeper to make the save. With the alteration of tactics, Dalian’s xG increased rapidly after 70 minutes.

Acknowledging this weakness, R&F’s deployed fast wingers- Chang Feiya and Renatinho, with wing-backs- Tang Miao and Chen Zhechao, who could provide as an overlapping option in front. This deployment aimed to create some 2v1 situations on the flank. And therefore took advantage of the openings on the flank to hit a high-quality cross with good crossers like Tang Miao and Chen Zhechao.

The above is an example of Dalian’s winger failing to chase back in R&F’s counter. Dalian’s right-winger Wang was too far away to engage and R&F utilised this by having the left wing-back overlapping. This was to create numeral superiority on the flank, but Hamšík tried to eliminate the overload by approaching to the flank. However, as this former Napoli midfielder shifted to the side, the centre was without the cover of his teammates and Dembélé was in this space. Therefore, a 3v2 was created in the marked area of image and Hamšík was kept chasing by the numeral disadvantage on the flank. R&F was penetrating this area and a high-quality final cross was created.

On top of this, the midfield-duo lacked pace and mobility. This affected Dalian’s ability to close the inside channel after being bypassed the midfield line in defensive transition, as the midfield-duo might not be in their position in time. Thus, R&F’s players would have the determination to cut inside in the counter as another way to attack the goal.

Hamšík and Cui Mingan in the above image weren’t fast enough to close the space in front of the defensive line in the centre in defensive transition. R&F’s wing-back Chen recognized the gap and determined to cut inside. Hamšík was rushing and trying to double-up with the centre-back, but he was too far and no fast enough to engage. Chen then succeeded in cutting in and ended with a shot on target.

How R&F’s played through the pressing trap

Another intriguing point to be discussed in this match is how Dalian pressed and how R&F broke it. The pressing trap of Dalian was set to force the ball played to the feet of centre-back Li Songyi and right centre-back Jiang Jihong. Their passing ability was not as good as the left centre-back Tošić, who could accurately pick the teammate upfront with progressive passes (accuracy of 83% in progressive passes). Thus, as the ball approached these two players’ feet, Dalian would use the two strikers to close the channel to Tošić, forcing them to play forward/long and dispossess.

As you can see from above, Jiang picked Li in the backline and this triggered a curved run of Rondón. Rondón shadowed the passing lane to Tošić and Li was forced to pick Jiang back. Li panicked by Rondón’s press and took his first touch a bit out of control. And the quality of the return pass to Jiang suffered from this as manifested below:

Li passed to Jiang’s back foot under pressure and Jiang was not able to face forwards to release passes in his first touches. He had to turn to find passing options. This gave time for Larsson to close him down and Rondón to block the passing lane to Li and to the weak side, and also time for Dalian to mark Jiang’s potential forward passing options. Then Jiang was forced to play long.

In order to fix this problem, the wing-back Tang would drift into the centre and used his dribbling technique to escape the opponent and create some openings for himself. Then he would switch the play to Tošić’s side, breaking the press and creating the opportunity to go forwards.

Tang drifted inside to receive from Jiang to relieve pressure in the above image. Tang was untracked in this drifting inside movement. He managed to use his technique to turning and escaped Sun (No.9) in the image. He faced to Tošić’s side (weak side) and hit the ball to Tošić’s left foot. Tošić then had space for ball progression while Dalian’s whole pressing was on the right flank.

This was an intriguing match with a lot of sophisticated tactics from both managers. They both adjusted their tactics according to the opponent’s behaviour over time, and the game encompassed plenty of tactical wisdom that is worth studying for all of us.