As the MLS is approaching the last two months before the playoffs, the Columbus Crew hosted Minnesota United FC. The Crew were looking to maintain their lead atop the entire league, while the Loons wanted to further solidify their playoff spot in a very competitive Western Conference.

Although the Crew conceded their first goal at home this season, they did just enough to keep Minnesota at bay. This tactical analysis will look at how Columbus came away with three points, and how Minnesota almost stole a point from the Eastern Conference leaders. 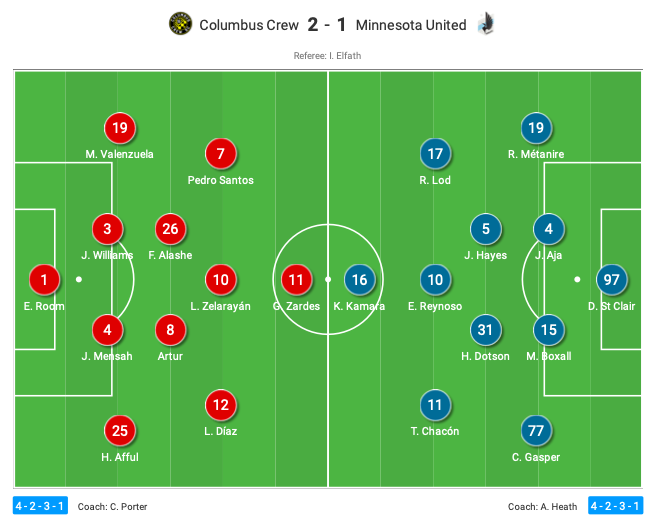 Caleb Porter lined up the league leaders in a very balanced and fluid 4-2-3-1. Although the double pivot lost Alashe early on to injury and was missing Darlington Nagbe, Sebastian Berhalter stepped in alongside Artur and helped keep the tempo of the game ticking. Of the front four, Zardes, Zelarayan and Santos have combined for 10 goals this season.

Adrian Heath had the Loons line up in a similar fashion with a 4-2-3-1. The Loons have been hit hard by the injury bug with two goalkeepers out, and a host of key players missing. Starting goalkeeper St. Clair has deputised admirably, starting his fifth straight game in the MLS. Heath has been able to bring in reinforcements, however, bringing striker Kai Kamara from the Colorado Rapids. Kamara has scored 133 career goals in the MLS, and the Loons want him to add more to that tally for them.

Since taking over in Columbus, Caleb Porter has breathed new life into the Crew’s attack with his brand of football. They have scored the second-highest amount in the Eastern Conference with 22 goals. The way that Columbus looked to break Minnesota down was through a style of vertical positional play that was similar to Bundesliga side Bayern Munich at times. 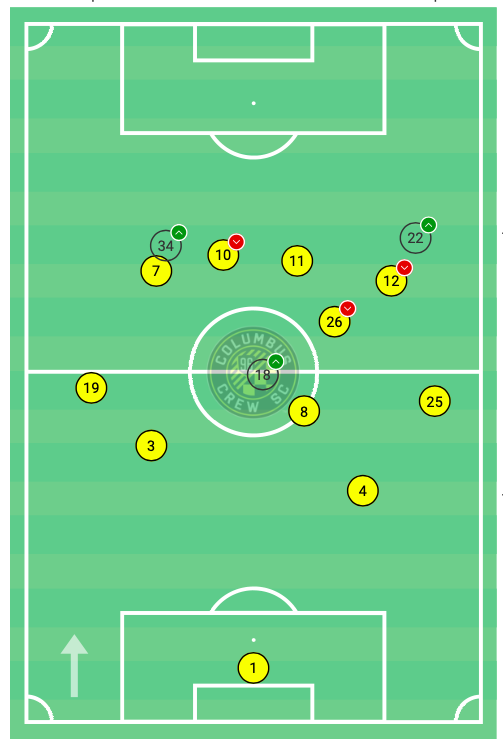 After the injury to Alashe, Porter switched formations to a 4-4-1-1, but in the attack, Santos and Diaz were able to push higher to form a front four. As we can see in the average positioning above, Columbus was playing in a 4-2-4 going forwards. Zelarayan and Zardes would occupy the channels between the back four to pin them centrally. By pinning the defence Columbus forced Minnesota into defending in a narrow shape, therefore giving the outside backs space in the channels. 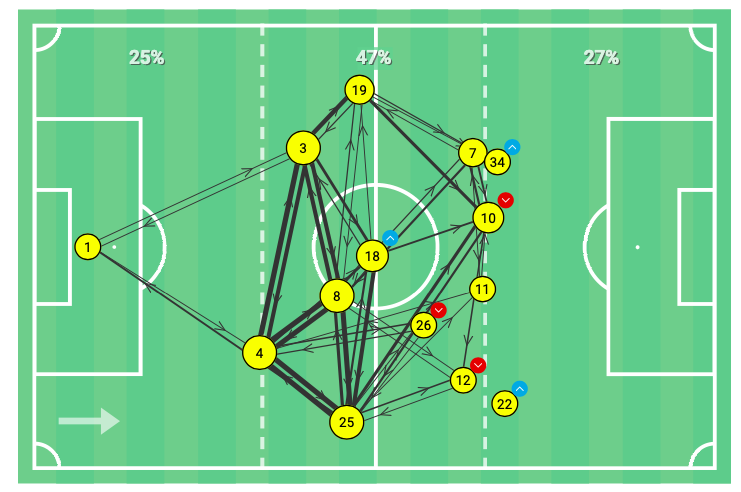 By dropping one of the two midfielders in the double pivot, Columbus formed a false back three. This tactic allowed the outside backs Afful and Valenzuela to move wider to stretch the Loons’ pressing lines. It also gave Columbus an extra man in the build-up phase against Minnesota’s front two. Looking at an analysis of their average passing combinations, we can see that the tactics were to draw Minnesota forwards, before exploiting the space behind the defence.

The Loons attempted to combat this positional play by maintaining a 4-4-2 in their defensive phase. The main function of this tactic was to force Columbus into playing a long pass into their forwards. This is where Minnesota would attempt to win the ball through a tackle, interception, or the ball sailing out of bounds. 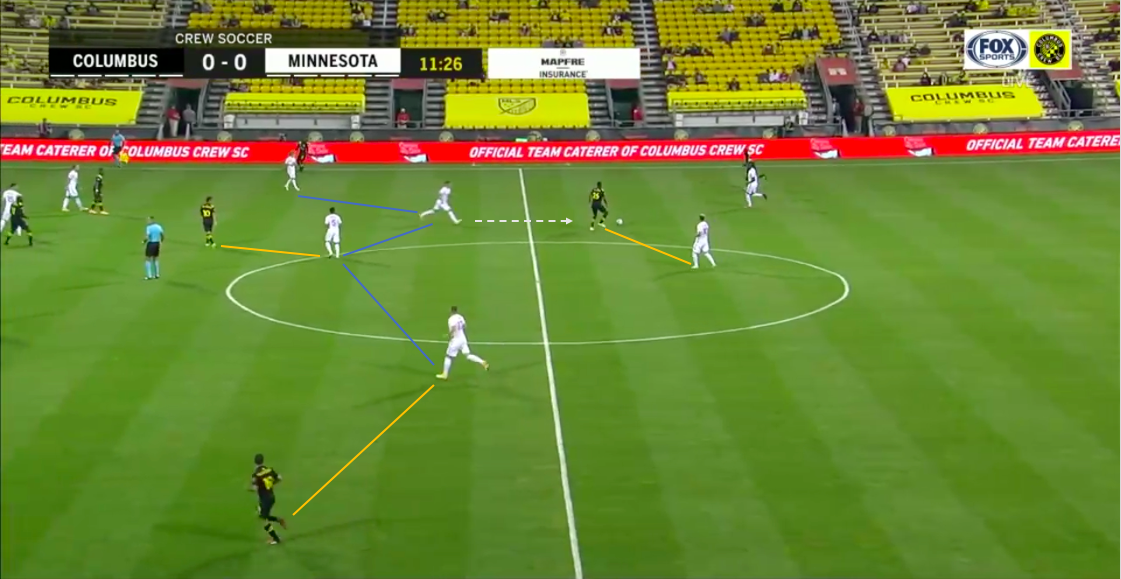 In the following example, we see Reynoso and Kamara forming the central pair in front of the midfield line of four. As Columbus tries to work their ball to the midfielder, Minnesota sends their own midfielder to press. This forces the ball back towards the Columbus back three. 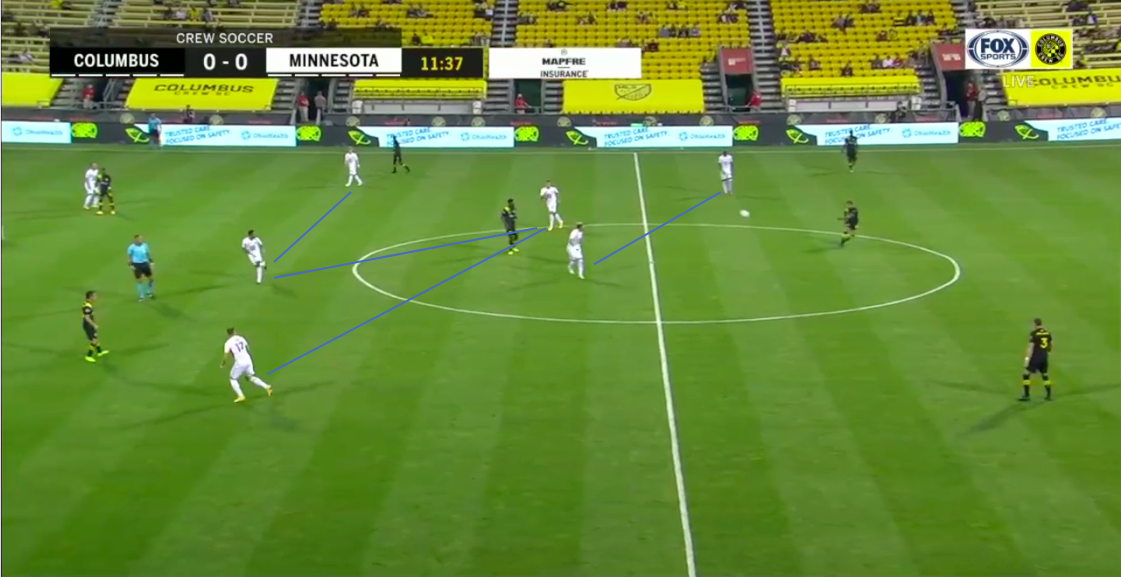 Recognizing that the only option is a long diagonal pass to Valenzuela, Artur sends his pass towards the left corner. The pressure from Métanire does not allow for Valenzuela to collect the pass comfortably, and the ball ends up out of bounds from a clearance. 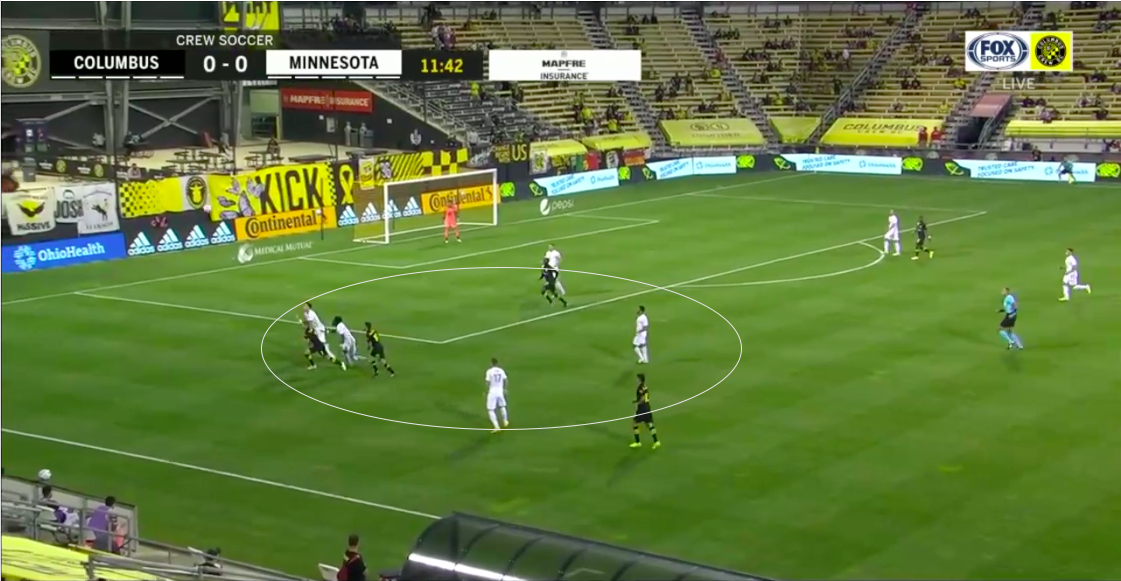 Keeping Columbus to wide areas also allowed the Loons to quickly gain a numerical advantage. As we see at the end of the sequence above, Minnesota had a 5 v 4 against Columbus out wide.

There were however issues with Minnesota’s ability to effectively shut down the central option. In the next section of the analysis, we will take a look at how Columbus found a way through the Loons’ defensive block.

The Crew breaks through

While Minnesota did force Columbus into long passes, Porter was able to adjust his team after the injury to Alashe in the 19th minute. Looking at the long passes throughout the game, we see that the number of long passes went down right before Columbus broke the deadlock. 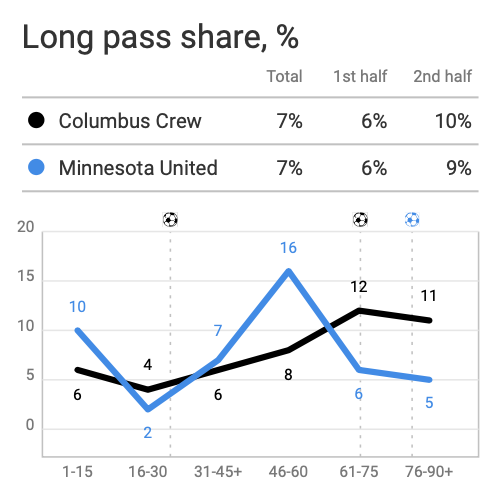 The Crew began to pass patiently around Minnesota, looking for pockets of space through quick switches of play. The movement of the front four was crucial in this tactical switch. Using the first goal as an example, we can see how Porter’s patient approach paid off. 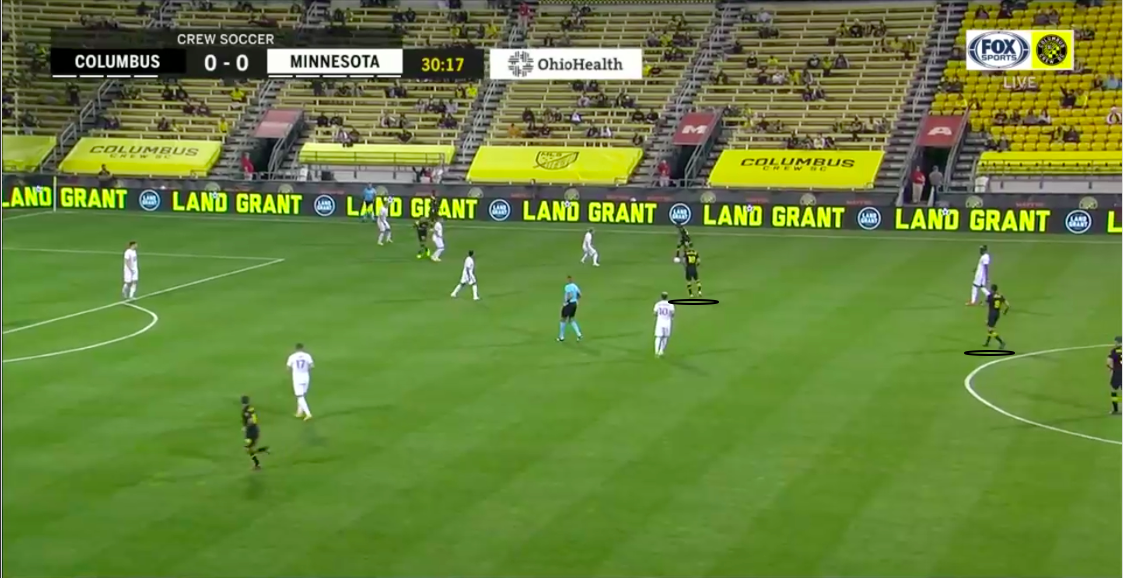 After Artur has played another diagonal ball to Afful, we see that Sebastian Berhalter is in support. Once he receives the ball he quickly plays a back pass to Artur, who has advanced from his deeper position. 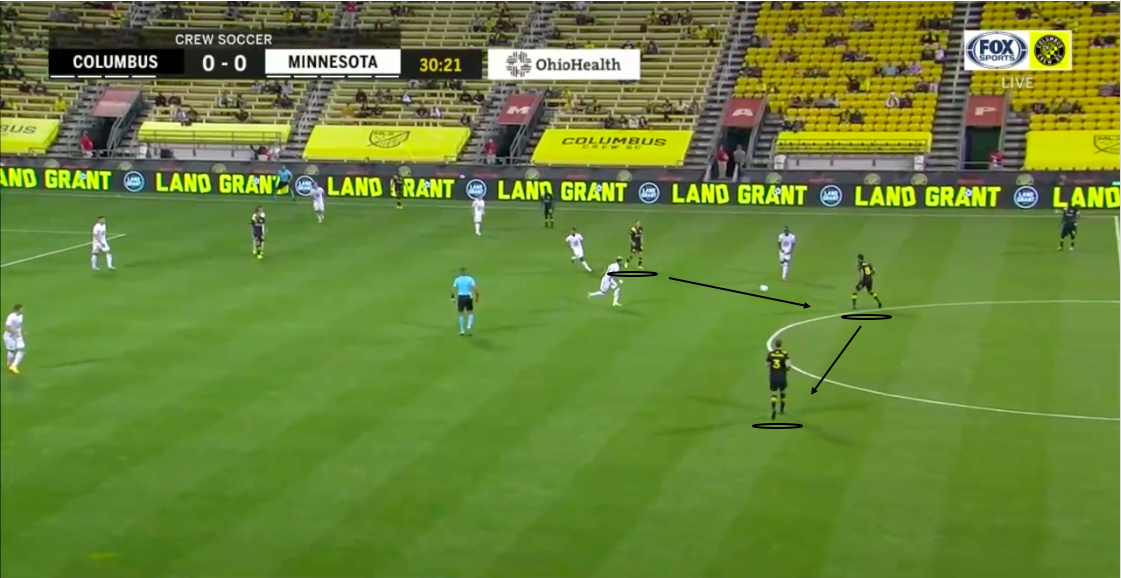 Using the left centre-back Williams as an outlet, Columbus now has space to drive into on the left. Santos checks into space from a higher position, and since Zardes and Valenzuela are pinning the defenders he is able to receive the ball unmarked. 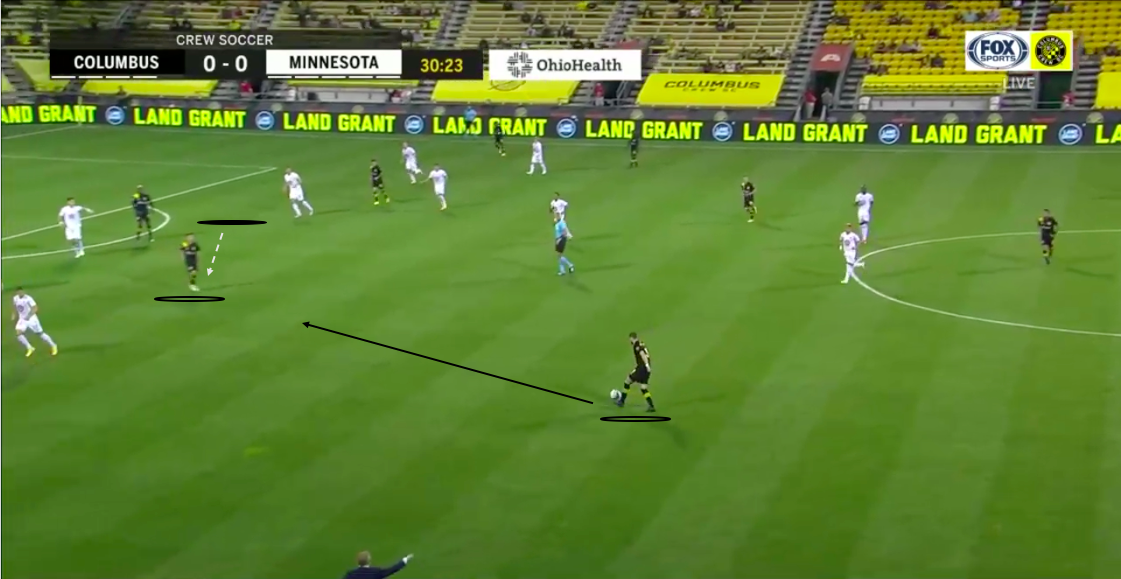 Once Santos turns, he calmly looks up to pick up Zelarayan’s run between the centre-back and left-back. The Argentinian midfielder is then able to steer the ball into the net with a diving header. 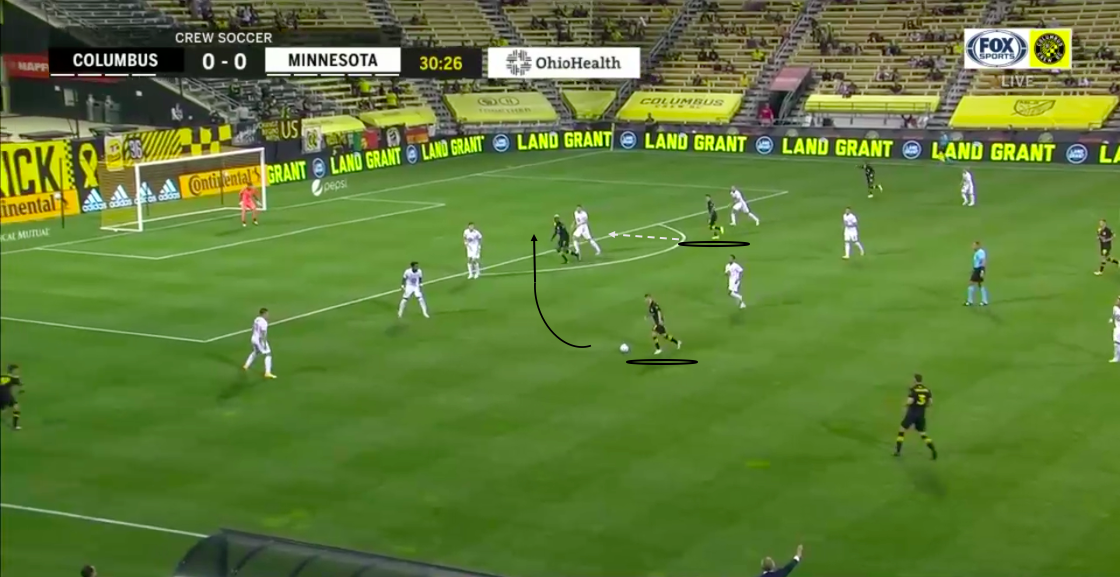 Columbus under Porter has been a defensive machine. Conceding only five goals this season, the Crew limited Minnesota to two shots in the first half. They were able to do this by maintaining a high line to counter-press once they lost the ball. 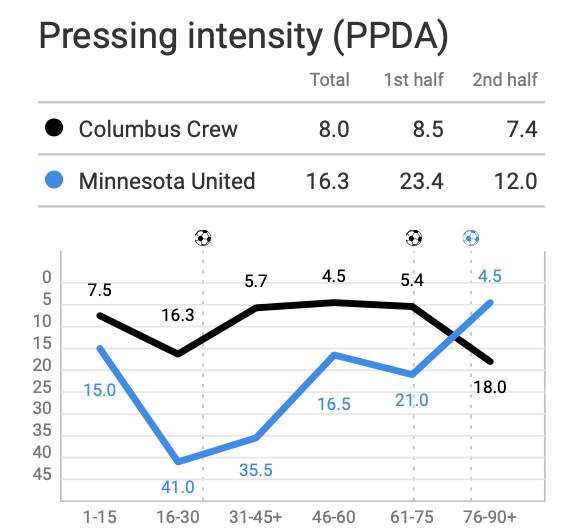 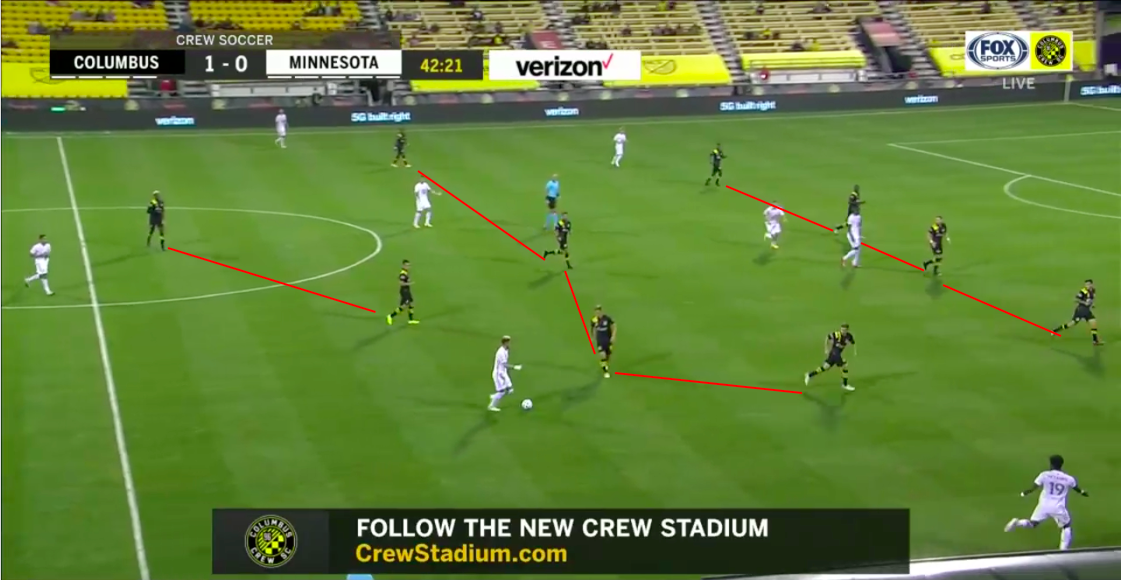 Above we see an example of Columbus in their 4-4-2 shape. While not entirely compact, Minnesota’s options going forward were limited. Columbus did this by using a mixture of man-marking and cover shadows to keep the Loons to one side of the field.

Minnesota began to increase their attacking tempo in the second half. Beginning to use overloads on the wings to their advantage. The Loons specifically targeted the left as we see in the attacking analysis below. 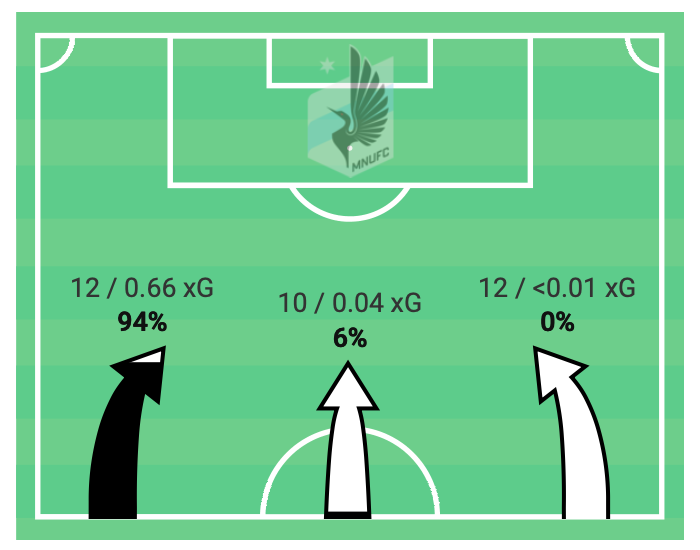 With the inclusion of Aaron Schoenfeld and Raheem Edwards, Minnesota began to push Columbus back into their half. Edwards would play higher up and tuck inside to allow left-back Gasper to overlap on the flank. Right side midfielder Robin Lod would arrive into the penalty area attacking the blindside of the defender. 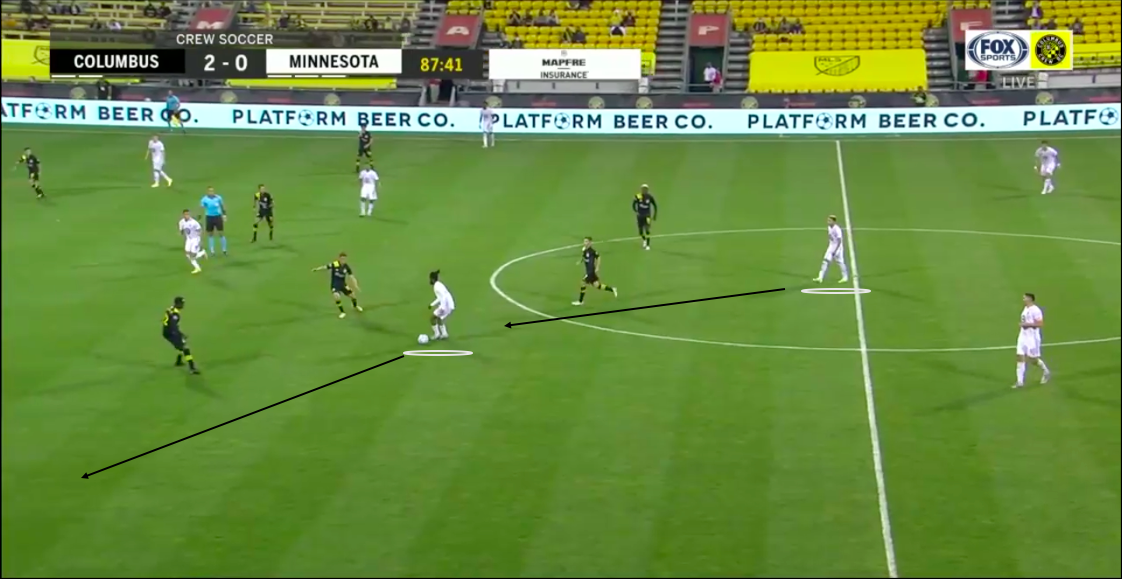 This move was vital for various scoring chances, most importantly the goal they scored. After dropping deep to receive a pass from the centre-back, Reynoso plays a ball to Edwards who is checking into the open space. 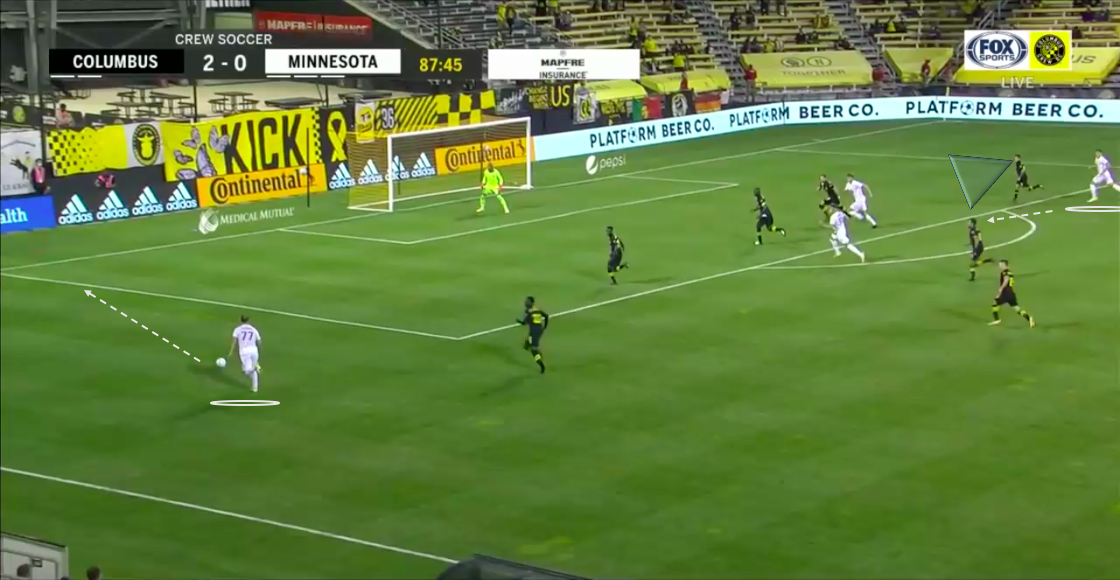 Edwards is able to turn, and after a slight pause, passes to Gasper down the left flank. On the opposite side, we can see Lod positioning himself in the defender’s blindside. 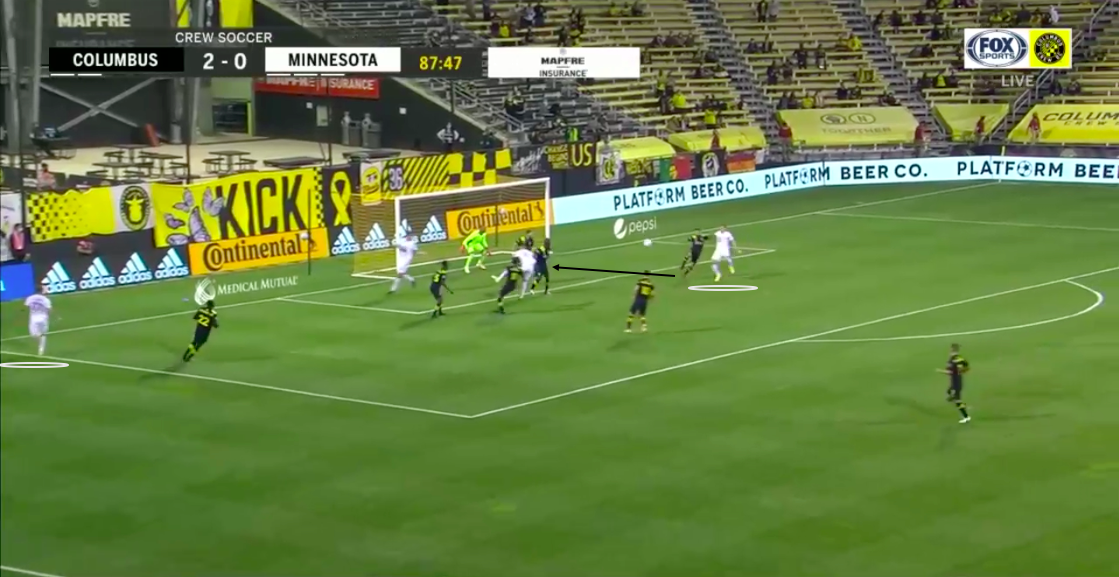 Once Gasper crosses the ball, Lod’s mark is poorly positioned to deal with the cross. The Finnish international is able to get his body and leg behind the ball and steers it past goalkeeper Eloy Room.

This match was a tense affair from start to finish. Although Columbus was in the driver’s seat, they could not put Minnesota away and it almost came back to haunt them. Even if Columbus was not able to record another shutout at home, Caleb Porter will be happy to keep the lead atop the East.

Adrian Heath and his team continue to quietly show that they are a difficult team to beat. Although they are winless in the last three matches, the addition of Kamara will no doubt boost their chances at qualifying for the playoffs. Once key players such as Ike Opara, Ethan Finley, and Luis Amarilla return Minnesota will be a force to be reckoned with. 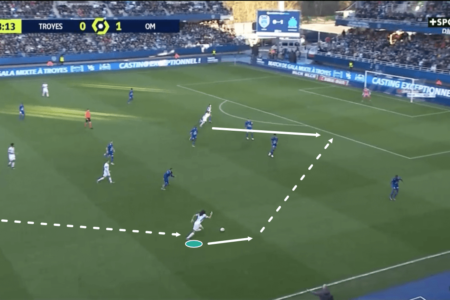 It’s not been all smooth sailing for Mattéo Guendouzi (185cm/6’1”, 68kg/150lbs), despite the PSG and Lorient youth academy product having […]