Rayo Vallecano was the league leader after the first two matches in Segunda Division. They just recruited the former Leicester City striker José Ulloa, who also played in the EFL Championship before. SD Ponferradina also had some surprising performance at the beginning of this season. It was quite an intriguing match and eventually this match full of fouls ended with the clean sheet of SD Ponferradina, scoring three goals.

In this tactical analysis, we shall examine the tactics of both sides. We’ll delve into the details of the match in this analysis. 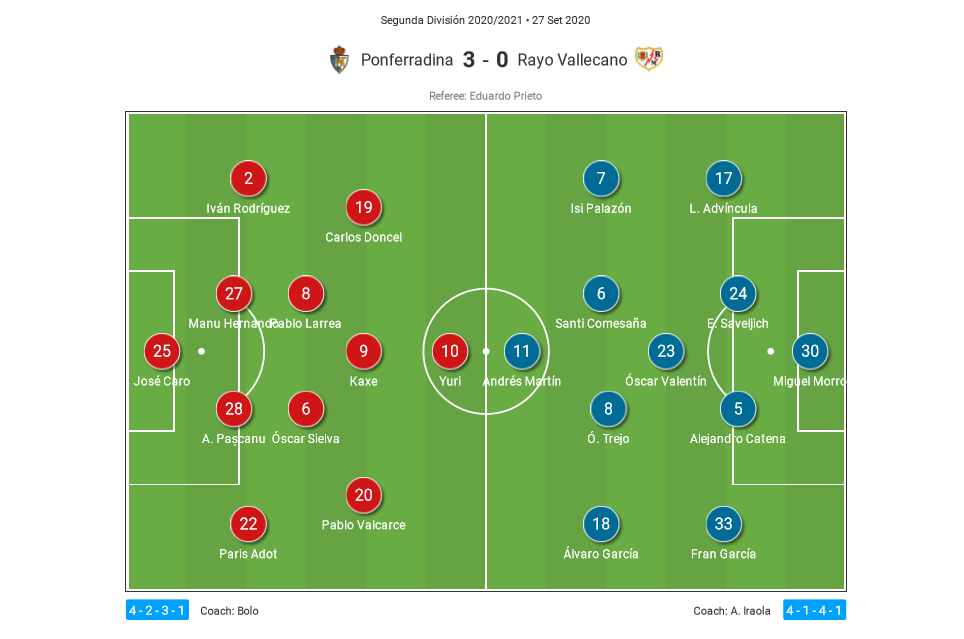 We’ll be delving into the defensive issues of Rayo Vallecano as our starting point, since SD Ponferradina designed their defensive principles and counterattacking tactics based on this.

In general, midfielders were the cause of the issues. As Vallecano utilised a 1-4-5-1 system, their midfield-trio didn’t position themselves in a manner. As one of the midfielders would be enticed to press on the ball, the space behind him would have no effective cover from the other two midfielders. Thus, Ponferradina could utilise this space, in many ways. They could drop a front-line player into the space to combine and progress, or they could just simply leave that space as a passing channel for penetrative passes, since the gap between the full-back and centre-back was not well-protected by midfielders.

As you can see from above, the midfielder Trejo failed to contain the opponent and he was bypassed. The covering midfielder Comesaña positioned himself too far to become the “press” player, and he was unable to cover the forward and penetrative passing channel effectively. Therefore Ponferradina´s player penetrated the midfield line easily and the attack was brought into the final stages.

If the midfield line is bypassed, generally midfielders are required to chase back and seek for any doubling-up opportunity to help the defensive line. However, Vallecano’s midfielders failed to do so. This was due to that the distance between the midfield line and defensive line in attacking and defending was too huge in the first place. Midfielders might find it hard to get back in place in time. This worsened the defending solidity in defending and defensive transition, which could be taken advantage by the opponent.

In the above example, we could see the huge gap between Vallecano’s lines in defensive transition, as well as poor positioning of the midfielders failing to prevent forward passing. Ponferradina’s attacking midfielder Kaxe could easily turn without pressure, and continued to pass forward while midfielders were too far to provide doubling help. Thus, the poor positioning of midfielders and the huge distance between lines together worsened Vallecano’s defence.
On top of this, two full-backs, former Real Madrid II player Gacía and Advíncula were attacking too high up the pitch, leaving the flank open in defensive transition. Also, Advíncula was not good at chasing back and he was substituted in the second half.

The principles were as followed: firstly, keeping a compact shape on the ball side to create a strong side of numeral superiority; secondly, based on the compact shape, players of the different lines and the same line should seek for opportunities of doubling/tripling-up to challenge the ball; thirdly, forced the ball to the outside instead of inside, especially to Advíncula’s side as he was back at chasing back.

After knowing these principles, we’ll explain the logic link amongst these principles. Firstly, as we mentioned that Vallecano’s full-backs were too high and left the space behind opened, Ponferradina intended to utilise this space. The best way to achieve was to recover the possession on the flank and launched the counter on the same side. That’s why Ponferradina forced the ball to the flank and later intended to recover the ball to launch the counter there.

In order to effectively recover the ball, Ponferradina employed the principle of compactness on the ball side. Compactness could create numerical advantage in a determined area and increased the possibility of recovering possession by creating the scenario for doubling/tripling-up.

What’s more, if their compactness succeeded in creating numeral superiority and recovering possession, they would also have the numeral advantage the moment they switched to attack. Thus, that’s the logic beneath these principles.

As you can see from above, Ponferradina forced the ball to their left-flank (Advíncula’s side) in the midfield with a compact pressing unit on the ball side. The press player Doncel shadowed the forward passing route, and the cover player Larrea stayed close to the presser and marked tight of his matchup. The pivot was marked by Kaxe and Yuri also dropped. Together they created a 4v3 numeral superiority scenario. As the ball was just released to Larrea’s matchup, Larrea aggressively tried to access the ball first while other Ponferradina’s players were also running towards the ball to challenge. Then they succeeded in recovering and launched a counter that was based on the numeral advantage of 4v3 in defending. They easily broke the opponent’s midfield line and faced forwards due to this.

All these defensive deployments were designed to exploit the counter in a greater extend. With all Vallecano’s weaknesses and Ponferradina’s defensive intention being manifested, their counter was quite simple to execute- to exploit the space left between lines and on the flank (mostly on Advíncula’s side).

While the exploration of space between lines of this example was shown in the first section, we’ll continue to discuss the follow-up of this counter. As we discussed in the first section that Ponferradina’s player could turn in the midfield and dictate the play, he managed to get the ball to the left flank’s Yuri, where Advíncula was too high up the pitch to chase back. Yuri could take a few more touches to get himself comfortable to hit the cross, and he found the Valcarce on the right flank. Valcarce was attacking the space left by Vallecano’s left-back García, who was rushing to chase back and chose a wrong position. Therefore, Valcarce latched onto the cross unmarked and he had time and space to finish and score eventually.

With Ponferradina’s solid and compact defensive structure, Rayo Vallecano found it hard to progress the ball into the final third, though they shared more possession throughout the match (39%-61%). However, they managed to make changes at the end of the first half and second half and their attack was more effective than the beginning of the first half.

While Ponferradina closed the ball-side channel for progression, there would be spaces on the non-ball. While direct verticality couldn’t effectively put the ball forwards and easy to be anticipated, diagonalization was the key to escape the pressure zone and therefore created chances for ball progression. Straight verticality on the ball-side was easy to be tackled for the likes of Ponferradina, as they compressed the ball-side area. Also, if the traditional recycling possession tactic was employed (that is, horizontally stretching then verticality), it was also ineffective enough since Ponferradina’s defending block could atone for space with fast shifting. diagonalization could explore the horizontally and vertical spaces at the same time. It was more unpredictable and kept the opponents in the dilemma of whether tracking or not.

As you can see from above, the central man in the back-three released a diagonal pass to find Martín who dropped to the centre diagonally from the flank. The marker of Martín had to decide whether to track or not. If he tracked, space on the flank would appear; if he didn’t track Martín, then it would be like the scenario in the above image. Martín received the ball with no pressure in the opening and the whole block of Vallecano hesitated of his next move. Therefore, time and space were created by this diagonal off-the-ball movement and pass.

Another alteration was the substitute player Joni Montiel. After he got on the pitch in the second half, his dribbles and playmaking skill had benefited Vallecano’s attack. He recognised the timing to hit diagonal passes, bringing the play into the final stages. Also, his take-on could break the midfield line of Ponferradina.

As you can see from the above example, Ponferradina formed a three-man pressing unit on Vallecano’s right. They tried to compress the space on the ball side whereas there would be space in the centre. Montiel recognised this and utilised his dribbles to get past the pressing unit to drift into the central space. The midfield line was bypassed and Montiel picked the teammate on the right flank. A final pass of good quality was created then.

It’s a typical match where the proactive and tactical defending helped win the match. The defensive and transitional logic of SD Ponferradina is worth studying over time. Rayo Vallecano, on the other hand, needs to find more effective offensive methods to create chances.