Along with Atalanta, Borussia Mönchengladbach were one of the most exciting, and surprising, teams within Europe’s top five leagues throughout the 2019/20 season. With much of the attention being on the German team’s attack, it’s easy to miss that they finished with the third-best defence in the Bundesliga. Paramount to this was their experienced goalkeeper, Yann Sommer. The Swiss number one has played over 200 games for Mönchengladbach, but his latest two seasons has proven he’s one of the most underrated keepers in Europe.

This tactical analysis will look at why Sommer and his team have been so successful defensively over the last two seasons. In a recent data analysis, Sommer emerged as one of the best goalkeepers currently in their peak, giving us the incentive to analyse him further. We will look at how the 31-year-old compares to other goalkeepers in different aspects of goalkeeping. We will also look at his strengths and weaknesses and what we can expect from him during the 2020/21 season.

How does his performance compare to other top goalkeepers?

Although Sommer is now playing behind a very solid defence, he has still been instrumental to his side’s success, particularly over the past two seasons, finishing fifth and then fourth in the table. Throughout the 2018/19 season, Sommer had a PSxG +/- value of 9.8, this means that he saved nearly 10 goals more than he was expected to. Although not as impressive, in the 2019/20 season he still saved 4.4 goals more than he was expected to. 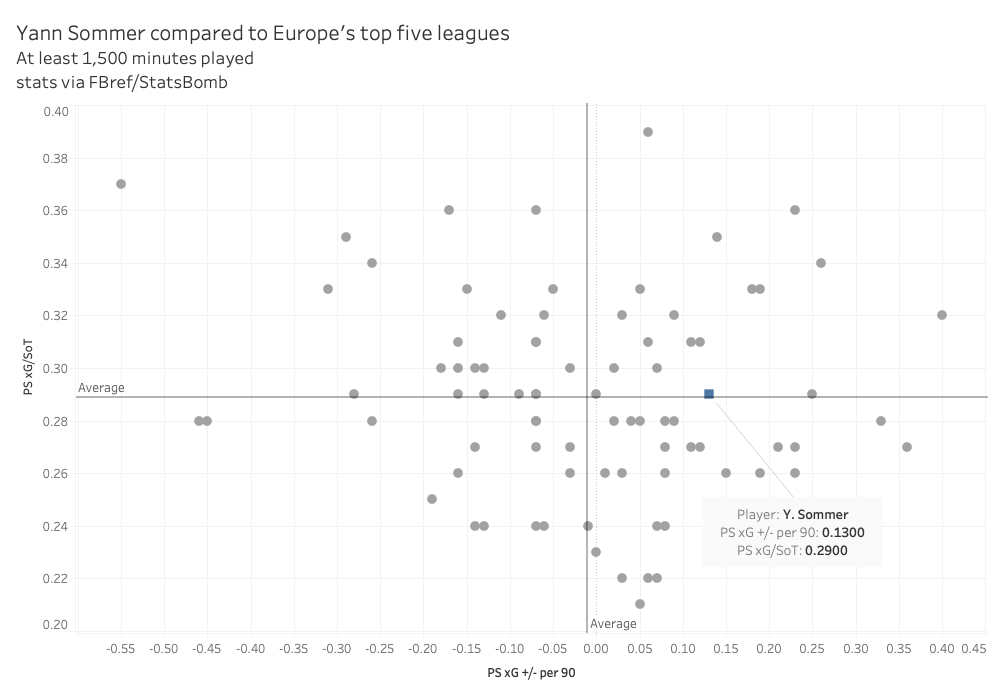 The above graph compares goalkeepers within the top five leagues who have played at least 1.500 minutes. It looks at the average shot difficulty that they have faced and the goals they have saved above/below expected.

We can see that Sommer had a PSxG per shot on target value of 0.29 and a PSxG +/- value of 0.13 per 90. These stats mean that he had a good season, with both stats being above the sample average. He faced harder than average shots and still managed to prevent more goals than he was expected to. As is evident, Sommer was one of the better performing goalkeepers last season.

Sommer’s success has been down to his anticipation, reflexes, and footwork. These strengths allow him to make up for his lack of height. Standing at just 6’0, he has to anticipate shots earlier and use his feet to move across his goal-line, rather than be able to stretch for the ball.

We can see in the above example that Sommer faces a very difficult shot from outside the box. The ball is dipping towards the top right corner, and a goalkeeper of Sommer’s height should struggle to save it. As the attacker strikes the ball, Sommer recognises early on where the shot will go. He uses his great footwork to move into the best position rather than jumping from where he was standing, likely making him unable to save the shot. This is a great example of how a shorter goalkeeper can deal with tough shots into the top corners.

However, even when Sommer has to react to a shot close to his goal, he’s still able to use his reach and footwork to save.

Here, it would seem like Sommer has no chance to save the shot. He’s one-on-one with the Bayern Munich attacker right in the centre of the goal. Sommer goes low to the ground and spreads his arms out to make himself as agile as possible. The keeper spots the shape of the attacker’s body and decides to gamble to his right. The attacker opens up his body, meaning that he is more than likely going to strike the ball across his body. Sommer gambles brilliantly and prevents a shot with a high xG value.

Although he has to work harder to make saves into the top corner of his goal, he is much more effective making saves down low.

Here, Mönchengladbach fail to clear a corner and the ball drops to Serge Gnabry. We can again see that Sommer takes up a good stance and is ready to react to the shot. Gnabry strikes the volley into the floor, making it even harder for Sommer to save because it skids up off the ground just before the goal. Because of his height, the keeper is able to get down to the ground faster than taller players. He’s able to get down early and get a strong hand to the shot, tipping it round the post.

His shot-stopping abilities have contributed to his 74.07% save accuracy and helping him prevent 0.13 goals per 90. Despite his height, Sommer is still an incredible shot-stopper, often saving shots that he isn’t expected to. However, the 31-year-old isn’t perfect when it comes to preventing goals.

Sommer has struggled in recent times with his handling. Although it doesn’t often cost his team, it is an issue that should be dealt with. In last season’s game against Werder Bremen, Sommer faced a fairly powerful strike from just inside the penalty box. Rather than catching the ball or taking the power off it by parrying it into the ground, he saves it into the centre of the box, a very dangerous area. Sommer was lucky his defenders were first to react. One thing that contributes to the issue here is his low stance. If Sommer was stood upright then he would have a better chance at catching the shot cleanly.

Even better with the ball at his feet

For a team that plays with tactics similar to Mönchengladbach, it is imperative to have a goalkeeper who is adept with the ball at his feet. This is what Sommer is. His team averaged the fifth-most passes per 90 last season with 441.25 and the fifth-highest possession with 51.7%. 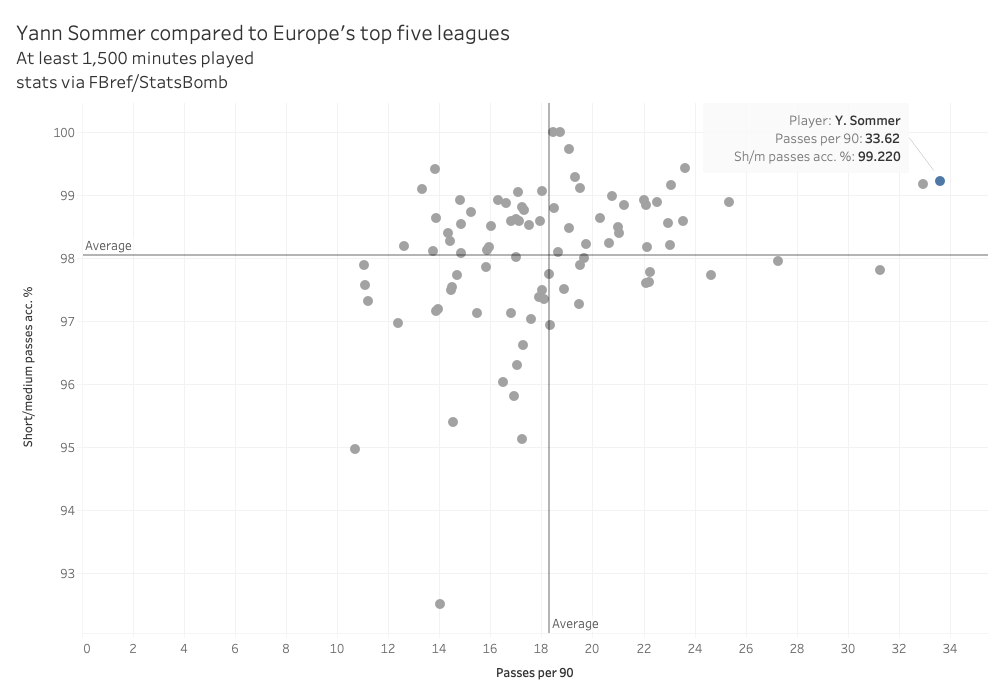 As we can see from the graph above, Sommer is one of the best passers in Europe. He makes the most passes per 90 of goalkeepers that have played over 1.500 minutes in the top five leagues with 33.62. He also completes a very high 99.22% of short or medium passes. Both stats are way above the average.

Sommer is confident in leaving his box which helps his team keep possession, almost acting as another outfield player. It also helps with his defensive actions, making 2.13 sweeps per 90. As we can see in the map below. 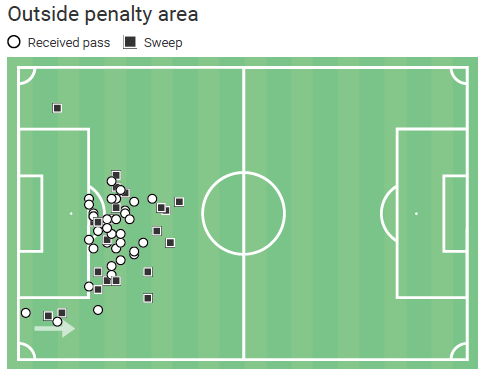 As it shows, Sommer is very active in making passes outside of his box. This helps his team retain possession of the ball whilst maintaining a good field position. The Swiss receives 23.91 passes per 90. With his team’s tactics and style of play, Sommer is very reluctant to pass the ball long. 47.35% of his passes are lateral and 74.33% are either short or medium.

In this example in the Europa League against Roma, Sommer uses his vision to find a good pass rather than kick the ball long and risk losing possession. In this instance, he uses his side foot to pass the ball along the floor and set the right-back down the wing. His great vision and execution mean that he can start attacks from his deep position.

Equally, Sommer is good at finding alternatives if he isn’t able to pass the ball short. In the above example against Düsseldorf, all options that would be available for a short pass are being cut-off by a good press from the opposition. Rather than hit an aimless ball up to the strikers and gamble on winning the second ball to retain possession, he finds a teammate in space and delivers a perfect pass. Sommer’s passing would be a great asset to any team.

This scout report has shown why Yann Sommer has been one of the most underrated goalkeepers in Europe’s top five leagues over the past two seasons. Many short goalkeepers struggle with difficult shots, however, much like Real Madrid’s Iker Casillas, Sommer thrives in these situations. His footwork, anticipation and reflexes mean that he is an excellent shot-stopper. However, he is prone to making the odd mistake. Along with this, the Swiss is currently one of the best passers in Europe, making a lot of passes with a high completion rate. At 31-years-old, Sommer still has a few more years in his peak.