PSG were coming into this game with a good run of results, having won their three previous Ligue 1 games and their UEFA Champions League match. As in every year, they are expected to win Ligue 1 and so far, they are on the right track, already settling themselves in the first place. However, PSG still can improve as their defeat against Manchester United showed.

On the other hand, Nantes had won one and lost two of their previous three games. They are in the 17th place with the same points as Nîmes who is at the top of the relegation places. They need to start getting points to not separate themselves too much from the teams above. Otherwise, they could be in serious trouble.

The game ended 0-3 for PSG. The goals came from a penalty, a cross, and then a mistake from Nantes. Nantes started the contest well as they were controlling the game and creating danger. However, as time went on, PSG started to show their superiority and dominated possession. This left Nantes to try to create counterattacks, which were not very successful. 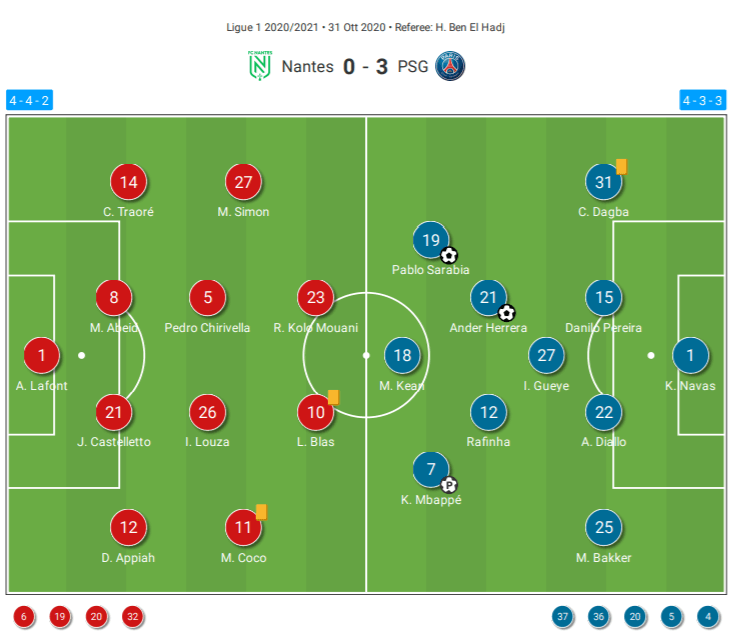 Nantes played the game in a 4-4-2, with Randal Kolo and Ludovic Blas leading the attack. In the midfield was Imran Louza and Pedro Chirivella, with Moses Simon and Marcus Coco on the wings. The back four consisted of Dennis Appiah, Jean-Charles Castelletto, Mehdi Abeid, and Charles Traoré.

Meanwhile, PSG played in a 4-3-3. The centre-backs were Abdou Diallo and Danilo Pereira, accompanied by Mitchel Bakker and Colin Dagba as full-backs. The three midfielders were Rafinha, Idrissa Gueye, and Ander Herrera. Lastly, the attack was made up of Kylian Mbappé, Moise Kean, and Pablo Sarabia.

Due to PSG having such technically-gifted players and having 3 midfielders, it is normal that they like building up from the back. They do this to always have control of the ball and because if they break the first line of pressure, they have space to run into to split the opponents.

Therefore, Nantes needed to somehow limit their build-up. Especially in the first half, they pressed high quite often. Having two strikers also helps in pressing as that means that each striker goes to a centre-back.

Their method of pressure is shown below. First, a striker has to go to the centre-back who has the ball from the middle, forcing the centre-back to go to the wing. This initiates a sequence of movements, such as the winger going to the full-back. Also, a midfielder tracks the PSG midfielder who is there to help and the other striker goes down to mark the defensive midfielder.

Nantes, in particular, want the centre-back passes to the full-backs to give them time for each player to get close to their marker. Therefore, when the full-back receives, he should be marked and should have no clear passes near him. 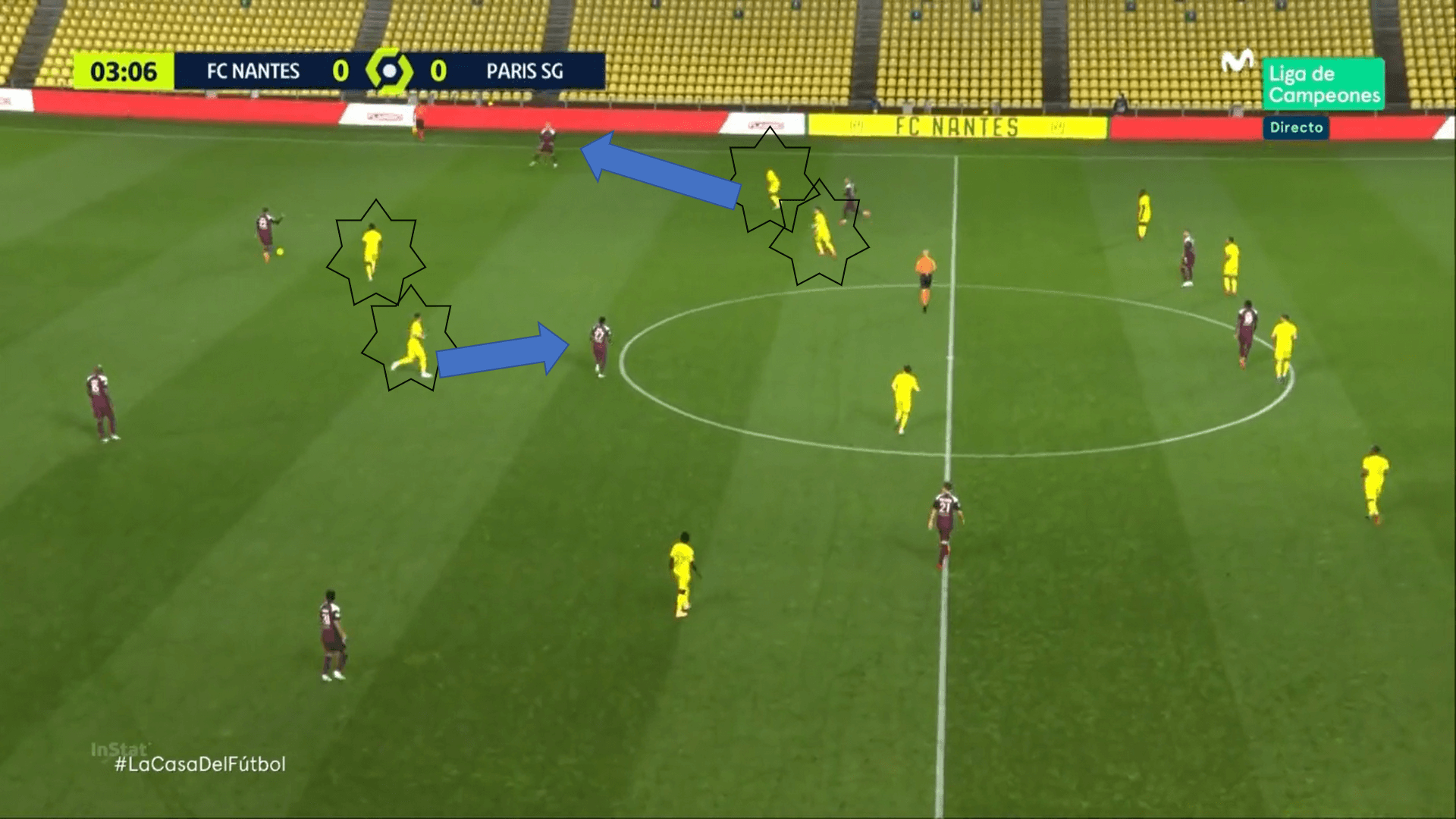 For PSG, it was quite easy for them to break this pressure at times and they did so in three ways. The first method was quickly circulating the ball between the centre-backs. This would make the strikers have to switch between marking a centre-back and going down to mark the defensive midfielder. 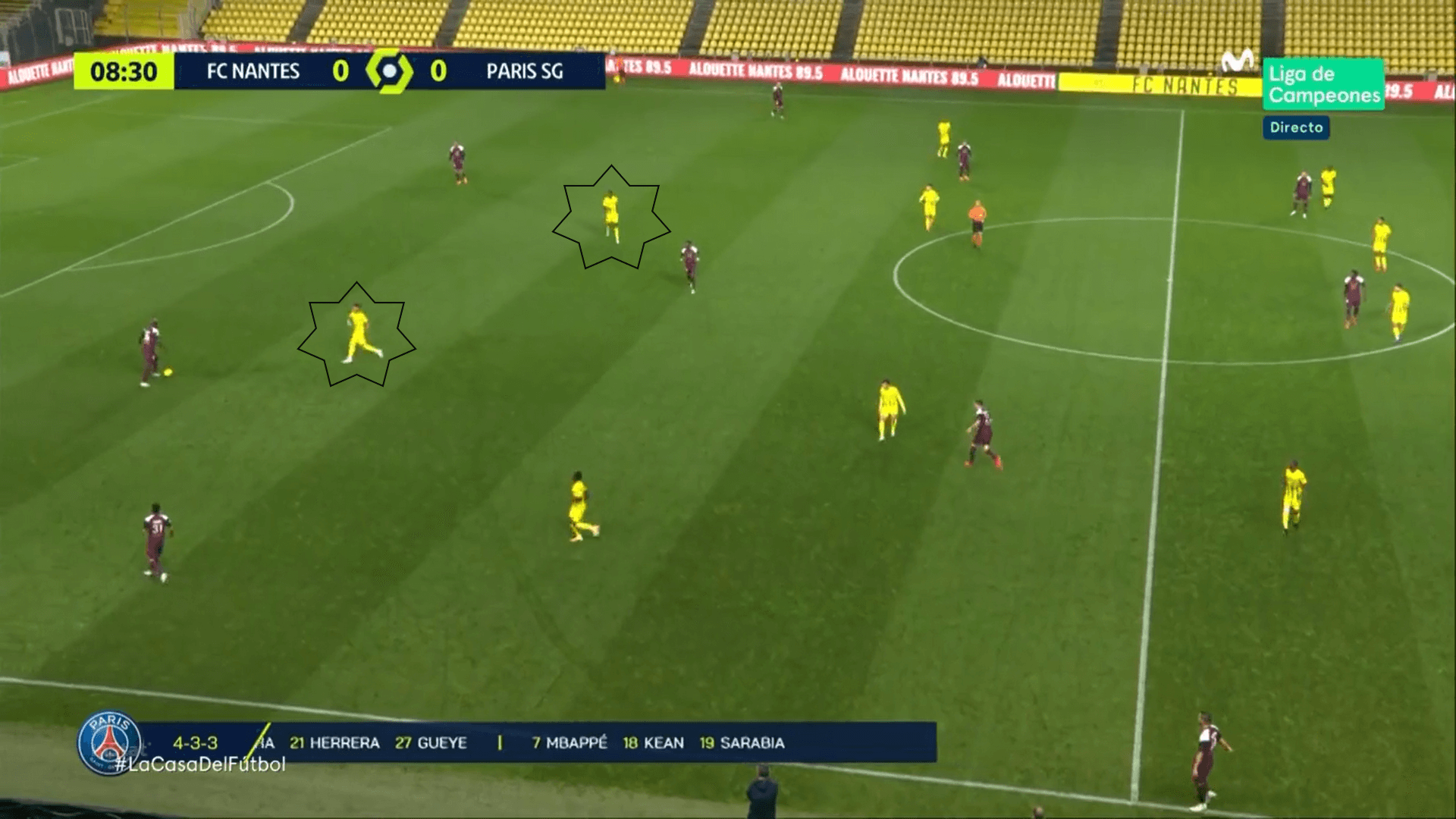 As soon as the centre-back received it, the striker would still be on his way and if he was tired, it would take more time. This allowed the centre-back to drive forwards with the ball and break the first line of pressure easily, as shown in the example below. 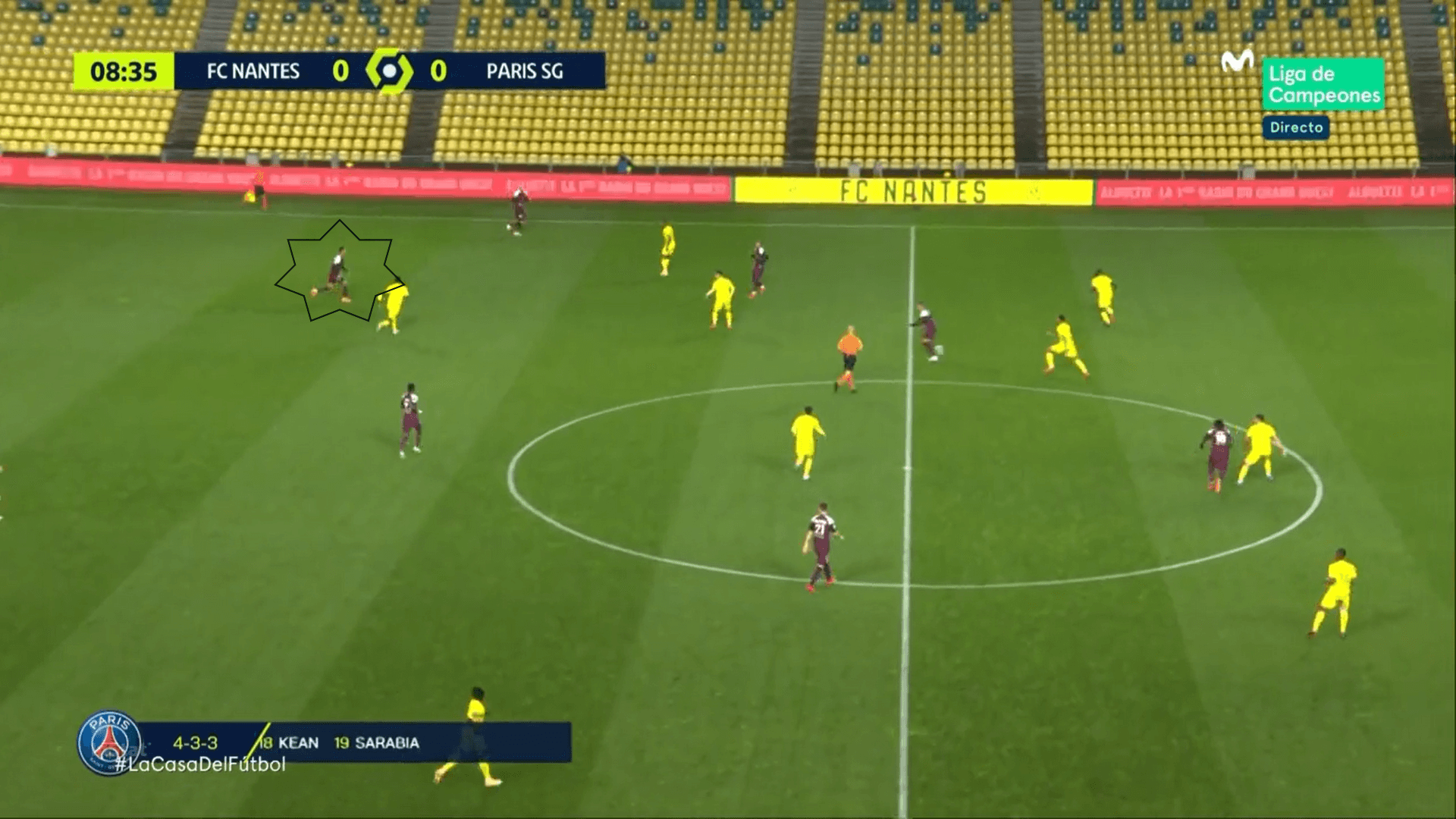 The second method also took advantage of the movement the strikers had to do. However, instead of driving with the ball this time, they would quickly pass the ball to the defensive midfielder before the striker had reached him. This is shown below.

It would then allow the defensive midfielder to turn around and start creating plays. Lastly, they made one of the midfielders come in closer on the left side to allow the left-back to advance more. This left the Nantes midfielder with no one to mark and made the winger have to go mark the midfielder in possession since he is the closest man. Meanwhile, the left-back would be unmarked and could go up to be a potential receiver of a pass. 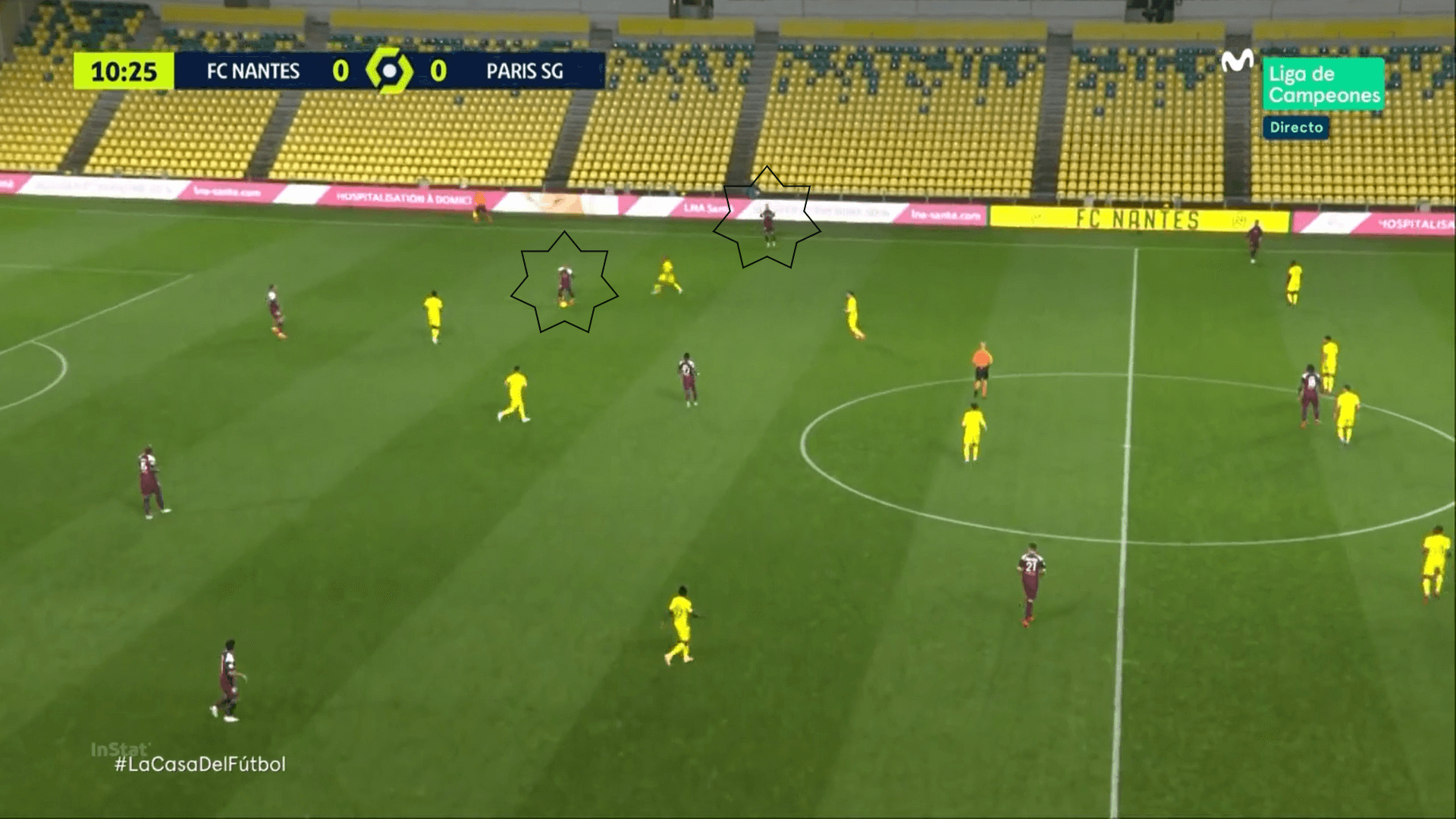 When they were having more of the ball in the first half, Nantes took good advantage of switching the play. Their strikers and wingers are fast, so they want to get them in 1 vs 1 situations often as it is an effective way to create danger on the wing.

However, for these situations to occur, you must create the space there first. They did this in two ways. The first method was having the left-winger and one of the strikers switch positions. This would confuse defenders as they would not know who to mark.

In the image below, we see that the striker is wide on the wing and that the winger is in a central position. Due to this change, the striker has a lot of space to run into and possibly create danger. 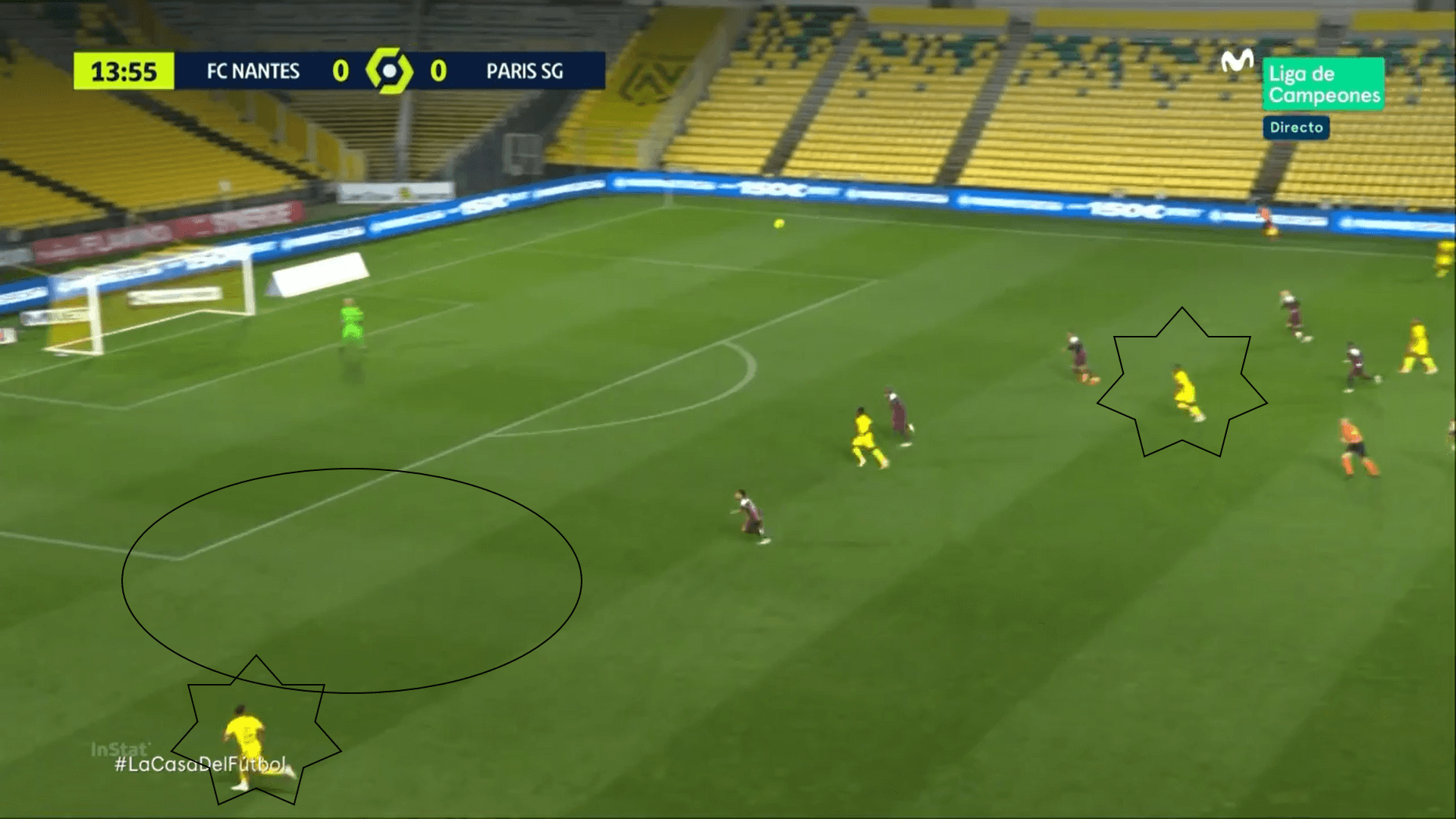 Moreover, they have another way to create space on the wing. This time it is the winger that is receiving the long ball. In order for the PSG right-back to not be concentrated on the winger, Nantes has to put another player there to distract him.

That is exactly what they did. In the image below, one of the strikers is fixing the position of the right-back and the winger is out wide with space in front of him. By having two players to focus on, the right-back has to concentrate on the one that is more in the middle, which means that if he has no support, the winger will be free. 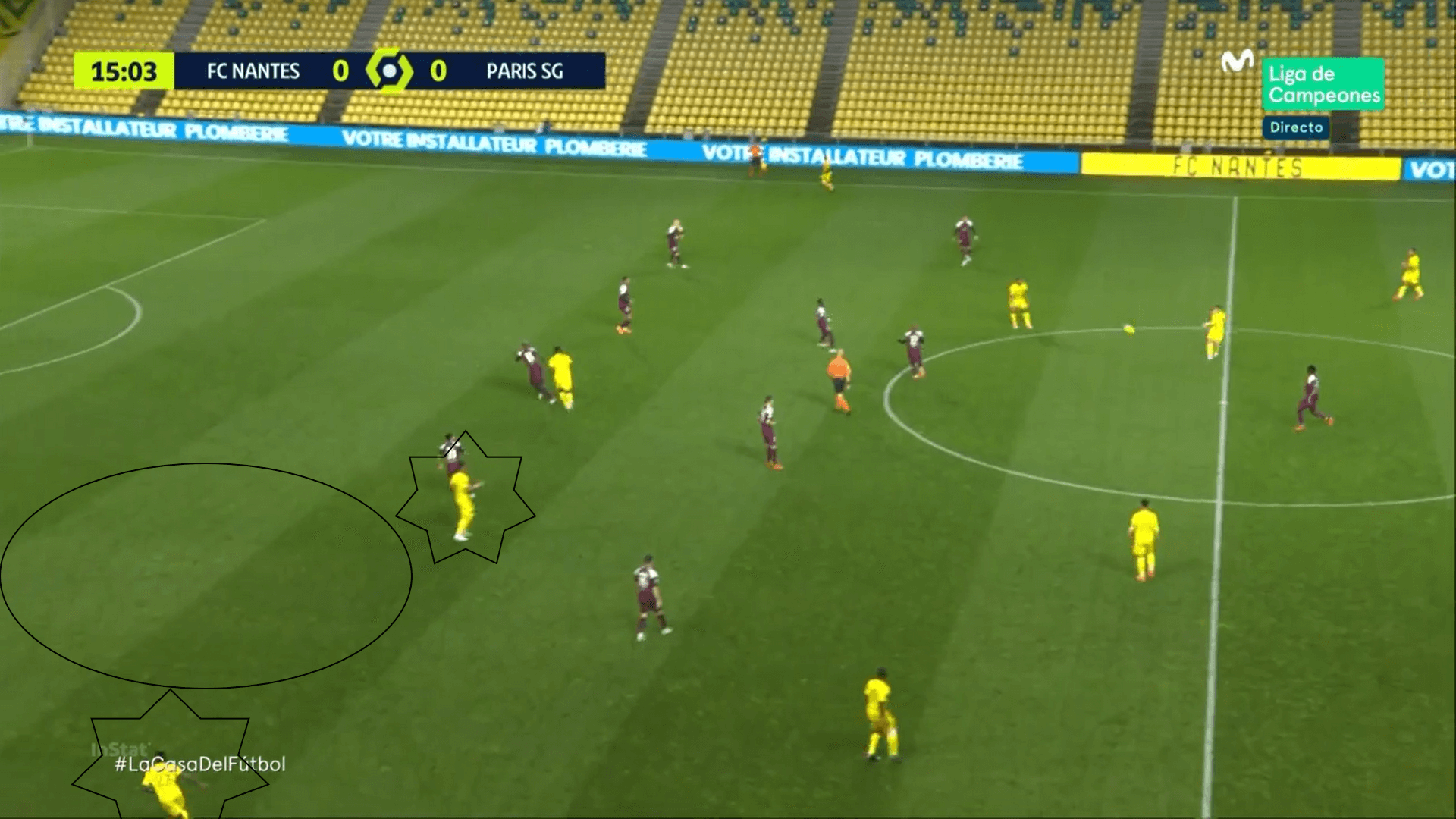 It is clear that Kylian Mbappé is a world-class player individually. However, it is important to note how he helps his team with his movements. Since he is so quick, he is constantly looking for runs in behind the defence.

This is always beneficial for PSG because if the midfielders do not have an option or are in danger of losing the ball, they know that putting the ball behind the defence can be dangerous because Mbappé has high chances of reaching the ball. It is sometimes a backup tactic for them when they cannot find anything easier.

In the image below, the midfielder is being pressed and he knows that if Nantes is pressing up, there will be fewer players defending and more spaces in their half. Therefore, he quickly looks up to find Mbappé and sends a long ball for him to chase. 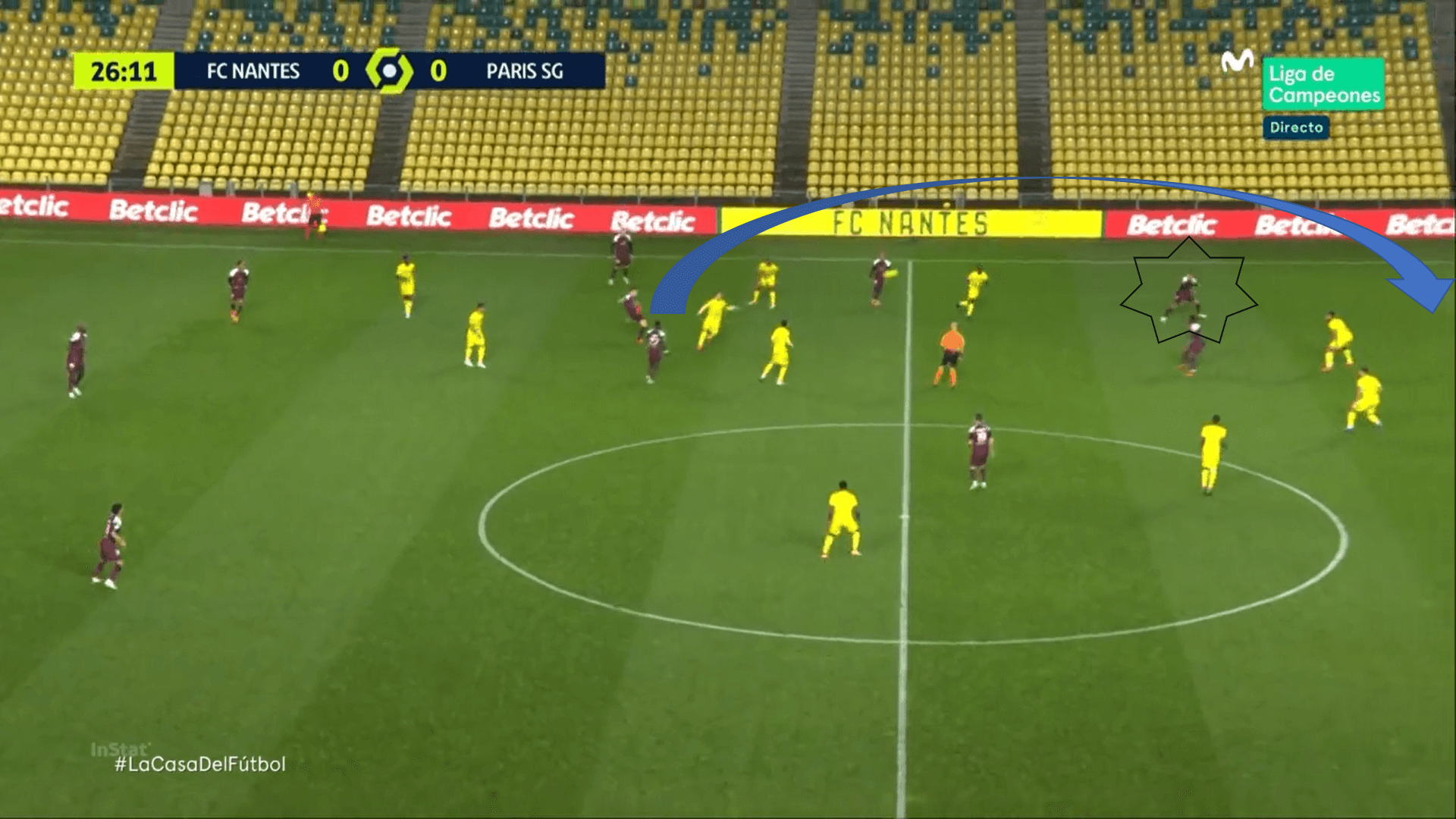 The next way that Mbappé helps the team is similar to what Nantes did. As well as being quick, Mbappé is great at 1 vs 1 situations. Thus, PSG often looks to get him into these positions. This is done by isolating him in the wing, so no PSG player brings another defender with him to that area.

For this, Mbappé has to know when he should go wide and wait for PSG to switch the play. In the example below, it is clear that there is no PSG player close to him on the wing and that there are two players in the box already. They are there because they know that Mbappé is probably going to be able to get past the defender and cross it in. Having three midfielders in the middle, compared to Nantes’ two midfielders, meant that they had numerical superiority and could more easily create danger through the middle. This is bad news for Nantes as attacking through the middle can split them up and is more dangerous than going from the wings.

For example, below we can see how Ander Herrera has positioned himself behind the midfield line and is alone. Idrissa Gueye passes the ball through this line and he can now turn around and be a threat.

To combat this, Nantes should have a more compact team and advance their defensive line closer to the midfield line. This would mean that Ander Herrera would not be able to control the ball and turn around the midfield line so easily as a defender would be on him already. 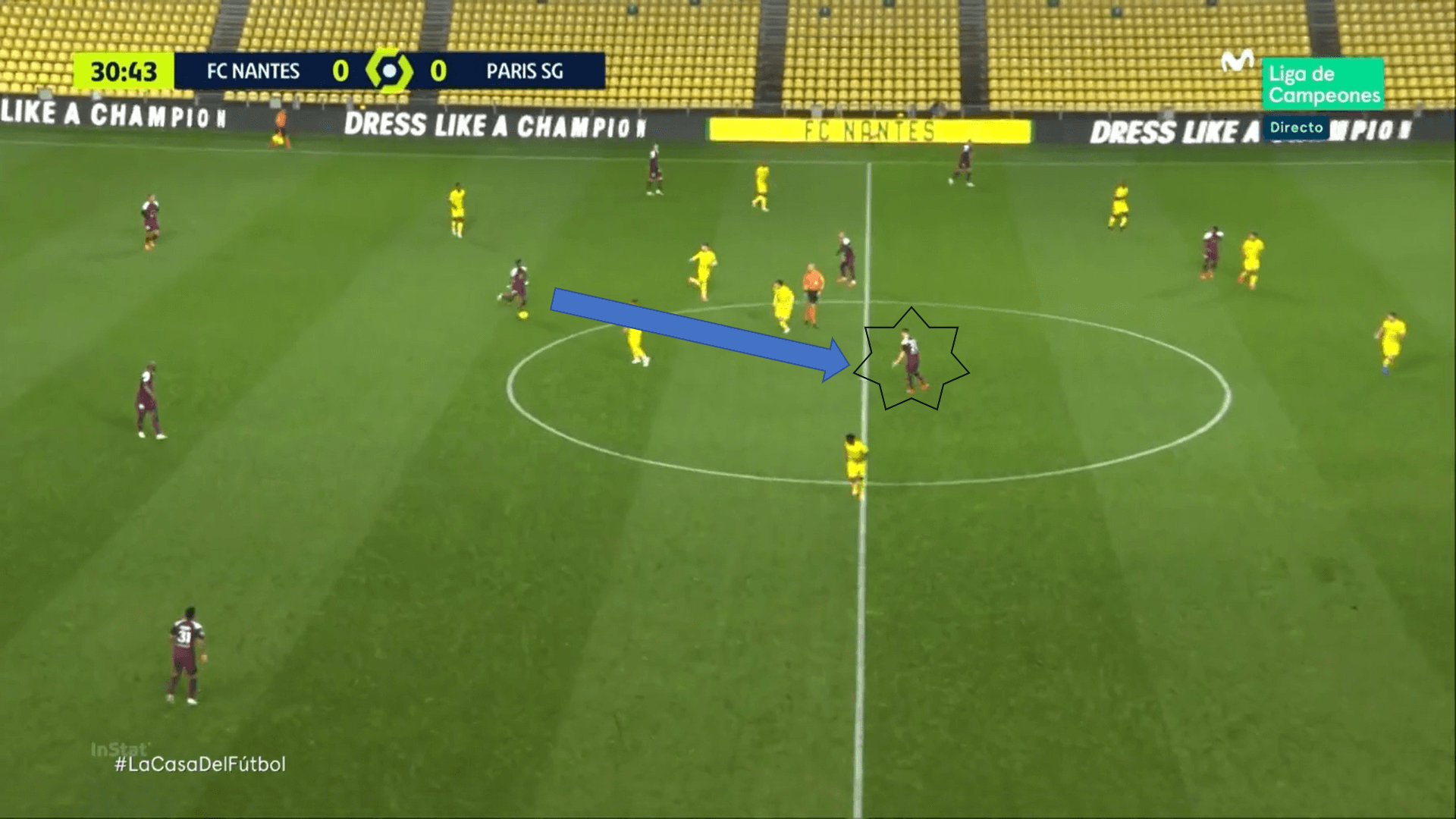 Furthermore, another way PSG created danger was by having attacking full-backs. In the second half, the PSG full-backs started to attack a lot more. This overloaded the Nantes defence as, usually, their wingers would not come down to mark the full-backs.

The Nantes wingers preferred to protect the middle instead of going out and mark the full-backs. Therefore, PSG made their full-backs almost become wingers. PSG would make their wingers come inside to produce space on the wing for the full-backs to go into.

In the example below, it is obvious how Mbappé has come into the middle and dragged the Nantes full-back with him. The PSG midfielder makes a pass to Mbappé and he gives it to the upcoming left-back on the first touch. The left-back then sprinted into the box and made a dangerous cross. 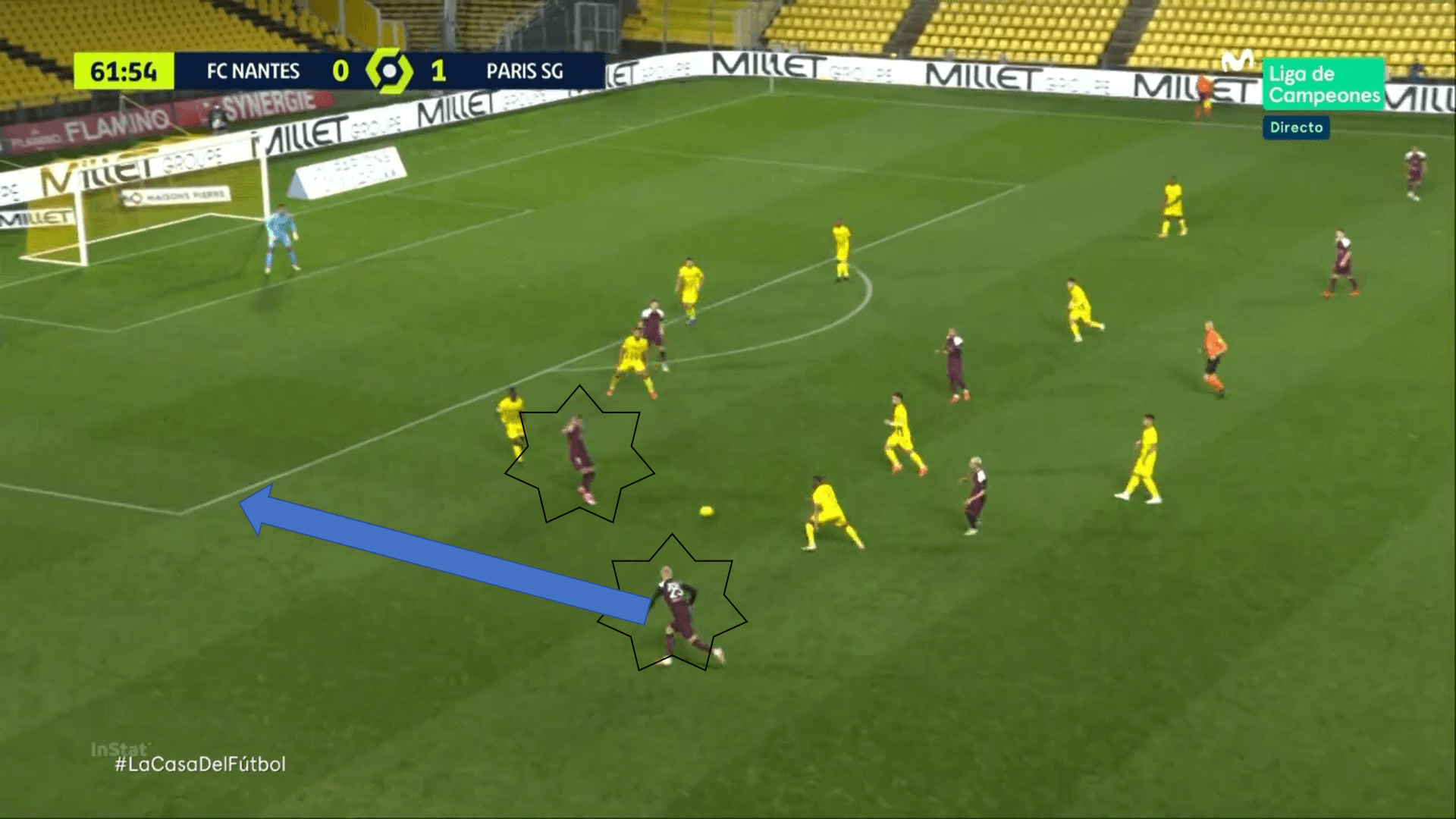 Overall, PSG dominated the play. Even though Nantes had some minutes in the first half where they were doing well, it was PSG who deserved to win. Nantes tried to attack by creating space on the wings and hopefully recovering the ball with their pressing. However, PSG found a couple of ways to break their pressure which made it useless.

Then PSG attacked with the options Mbappé gave as well as through both the middle and the wings. Nantes need to drastically change if they don’t want to suffer to remain in Ligue 1. On the other hand, PSG showed that they can play comfortably against the bottom-tier teams of the league.