Since their Under-17 World Cup triumph in 2015, Nigerian supporters have maintained a keen interest in the development of their latest crop of talented footballers. Almost four years on, no-one is shining more brightly than Villarreal’s Samuel Chukwueze.

His dribbling ability and tendency to shoot from range have brought about comparisons with Arjen Robben, and reports have him linked with another of Europe’s elite sides. This analysis will assess the 19 years old’s quality with the help of statistics.

Born in Ikwuano, Samuel Chukwueze honed his skills at the Diamond Football Academy between the ages of 12 and 17. He was then signed by La Liga club Villarreal, despite serious interest from Arsenal.

Having performed well for the Yellow Submarine’s reserves, Chukwueze made his first-team debut in September of last year. Since then, his positive style of play has seen him attract attention from the likes of Bayern Munich and Atletico Madrid. He also made his senior international debut for Nigeria in November 2018.

Naturally left-footed, the super eagle almost always plays on the right wing, looking to cut infield at every opportunity. His heat map from the domestic campaign can be seen below. 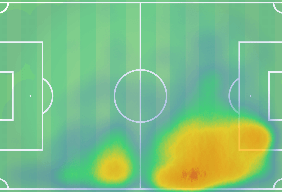 Chukwueze’s ability to carry the ball beyond defenders means that his teams often look to isolate him on the right flank. By building the play on the opposite side, they draw the opposition defensive shape over, leaving space on the right for the youngster to exploit.

The opposition will regularly double-up on him in an attempt to prevent his progression into the box. However, Chukwueze’s close control and trickery consistently see him outplay multiple defenders before arriving in the box.

The image below shows an instance in which the wide man has been fed the ball on the right, with two Rayo Vallecano defenders partnering up in their attempts to dispossess him. Despite their efforts, Chukwueze manages to drive between them with the ball at his feet before arriving in the penalty area and dragging his shot into the side-netting. 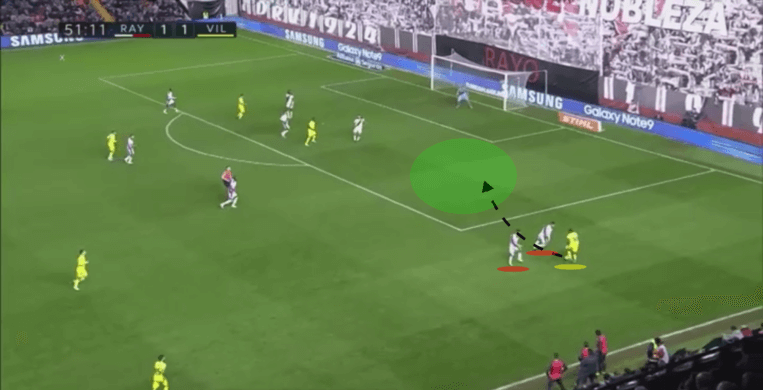 While his dribbling qualities allow him to exploit the space out wide, they also mean he can play through more congested channels in the centre. As mentioned previously, he has a natural tendency to carry the ball infield diagonally, engaging a number of opponents and disorganising their defensive unit in the process.

Even in these tight spaces, Chukwueze has the close control to exit the pressure and penetrate the last line of defence. The image below illustrates this. Having dribbled towards the middle, he feints to go further infield, unsettling the closest defender. He then takes advantage by dribbling through the gap that’s been created before lining up a finish. 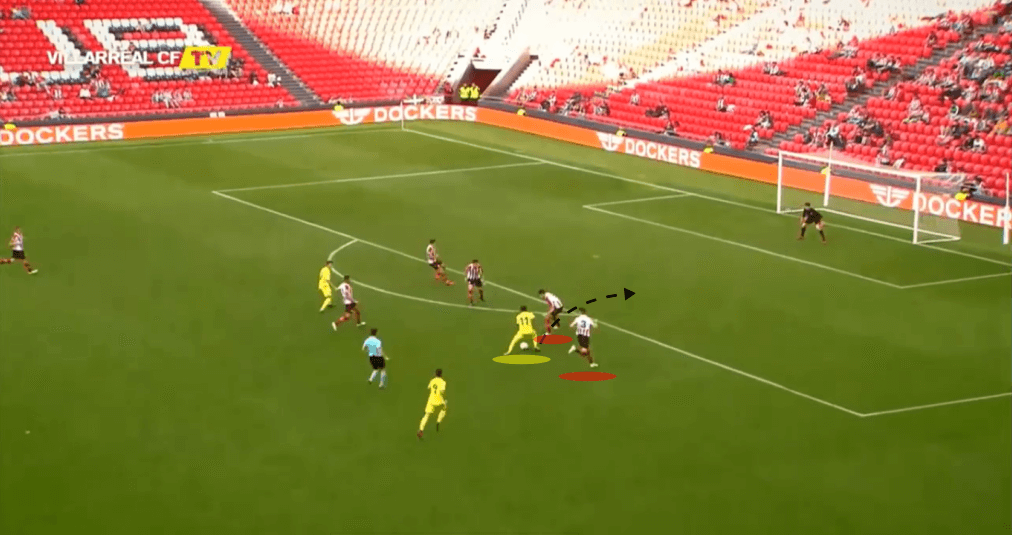 With Bilbao’s defence left in his wake, Chukwueze calmly slots the ball past the keeper. 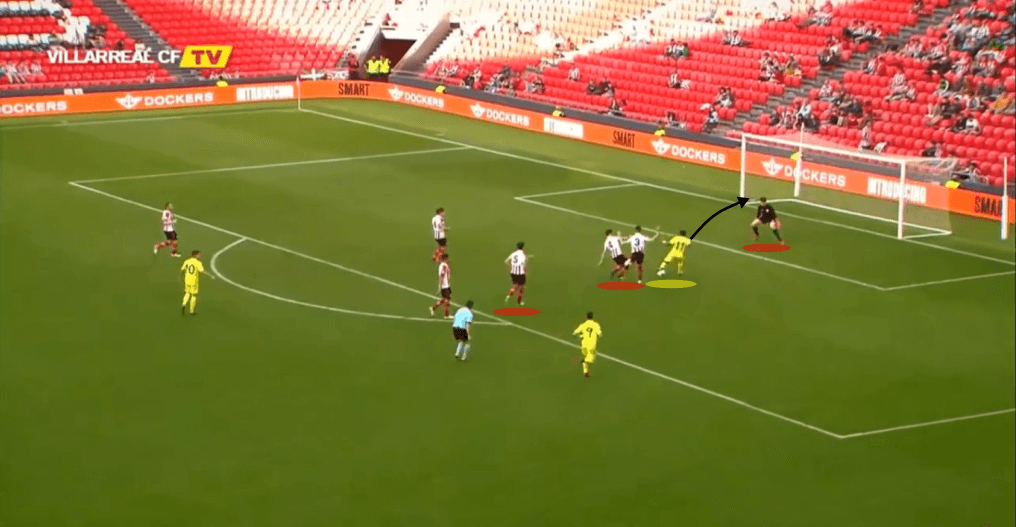 On average this season, he completes 8.94 dribbles per game, successfully completing 73.4% of them. Both figures rank higher than the likes of Nicolas Pepe and Raheem Sterling. The stats become more impressive when you consider Villarreal’s struggles this term, with Javier Calleja’s side languishing in 17th, just four points outside the relegation zone.

As is often the case with talented young dribblers, Chukwueze occasionally over-plays, often to the frustration of his teammates. He sometimes tries to carry the attack by himself, regularly bypassing three or four defenders along the way.

However, he doesn’t always take full advantage of the defensive pressure applied to him. In the image below, he had previously taken two defenders out of the game on the wing. As he arrives in the box, he has successfully engaged four opponents.

This leaves at least two of his teammates free to receive in the box, with a clearer opening to goal than Chukwueze has been afforded. Instead of squaring the ball to the striker, he tries to score himself, scuffing the attempt wide with the shooting angles closed off.

Although the image above represents a pattern of his game, there are also plenty of occasions in which he makes the right decision with his final action.

Cutting onto his stronger left foot, he often plays through-balls behind the opponent’s last line, as well as sometimes picking out teammates with a delivery to the back post. Despite his ability to bypass defenders, he rarely goes on the outside, and so his crossing numbers aren’t as high as you might expect for a winger so adept in one-on-one scenarios.

This season, he has recorded an average of 1.41 crosses, with 39.7% finding their target. In 17 La Liga appearances, he has managed just one assist, coming early on in his side’s 2-2 draw at home to Real Madrid.

The image below provides an example of Chukwueze dribbling into the centre, drawing opposing players into defensive actions, and leaving gaps in their back line. He retains his composure on this occasion, recognising that a shooting opportunity doesn’t exist, and that Santi Cazorla is arriving as the free man on the left. The former Arsenal midfielder receives a perfectly weighted pass before curling his effort beyond Thibaut Courtois. 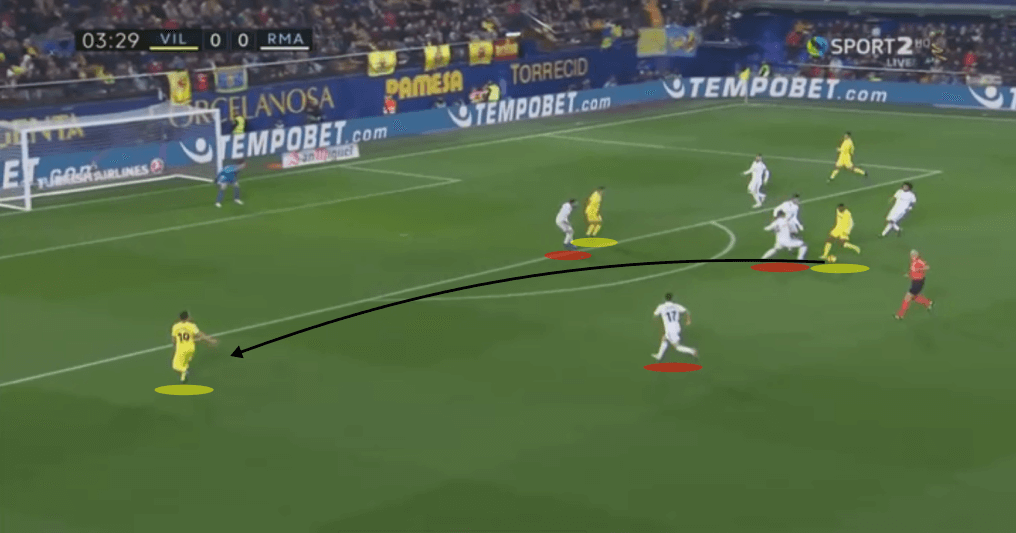 As is to be expected for such a young player, the consistency of Chukwueze’s end product still has some way to go if he is to make the step up to a Champions League club. His pass accuracy stands at 77.7%, but his decisions regarding when to shoot and when to find a teammate have prevented him from improving on his single assist this term.

As we’ve seen, Chukwueze’s game is based on receiving on the right before cutting infield. This, combined with his tendency to shoot from range upon arriving on the edge of the box, has lead many to draw comparisons with Dutchman Arjen Robben.

The sequence below provides another example of his penchant for cutting inside. After Villarreal overload the left side of the pitch, the striker plays it out to Chukwueze in a one-on-one in the right half-space. 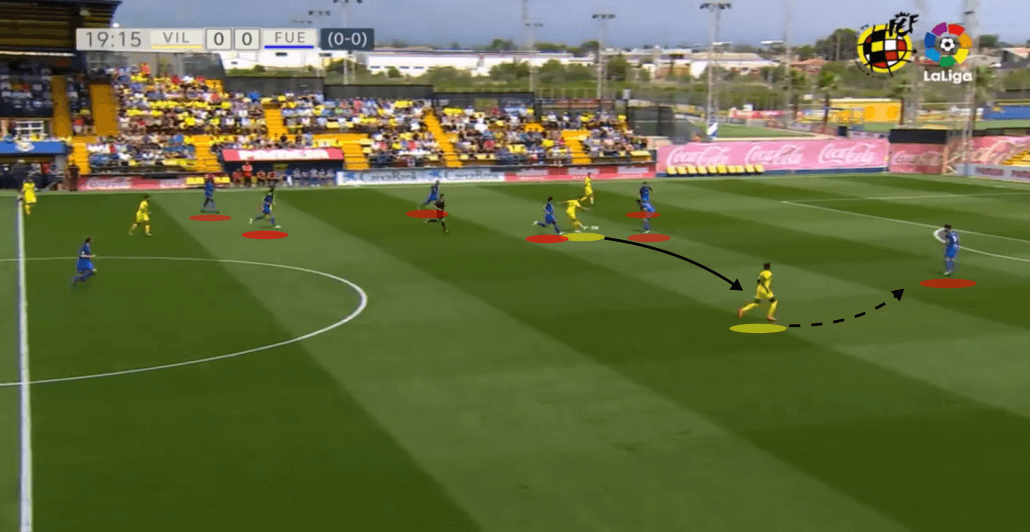 Having taken his first touch forward into space, the Nigerian international creates the right angle to shoot, finding the top corner with a powerfully struck effort. 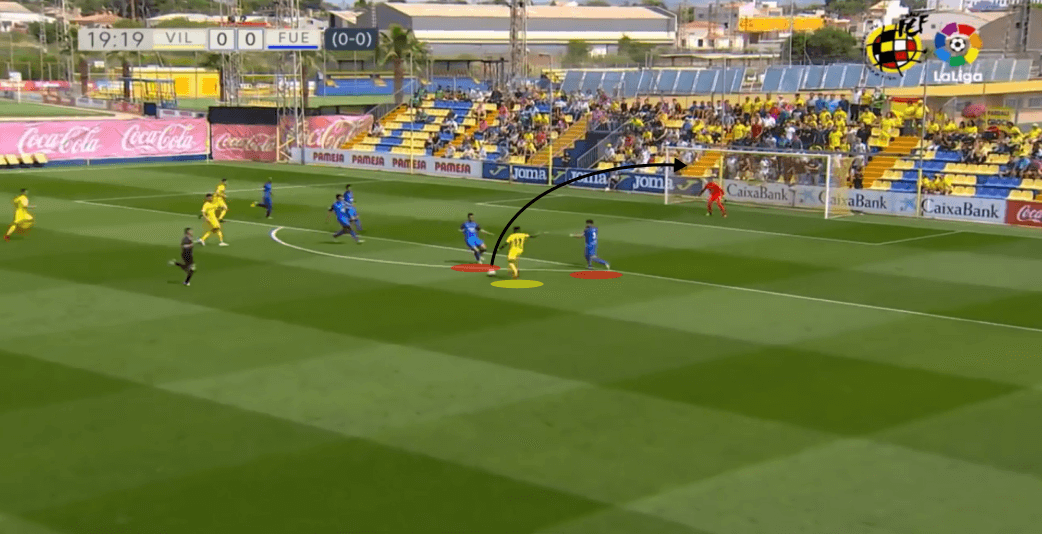 In the example above, he positions himself in the half-spaces, recognising that staying in the wide channel wasn’t the appropriate option. Had he done so, his teammates’ pass would have had further to travel, allowing the defence to shuttle across and close out the space.

In the next example, Chukwueze appreciates that positioning himself further out wide is more appropriate based on the positional landscape. The centre becomes congested by opposing players, and the winger can provide the out-ball to the right of the block. He receives from the attacking midfielder, before engaging the opponent’s left-back. 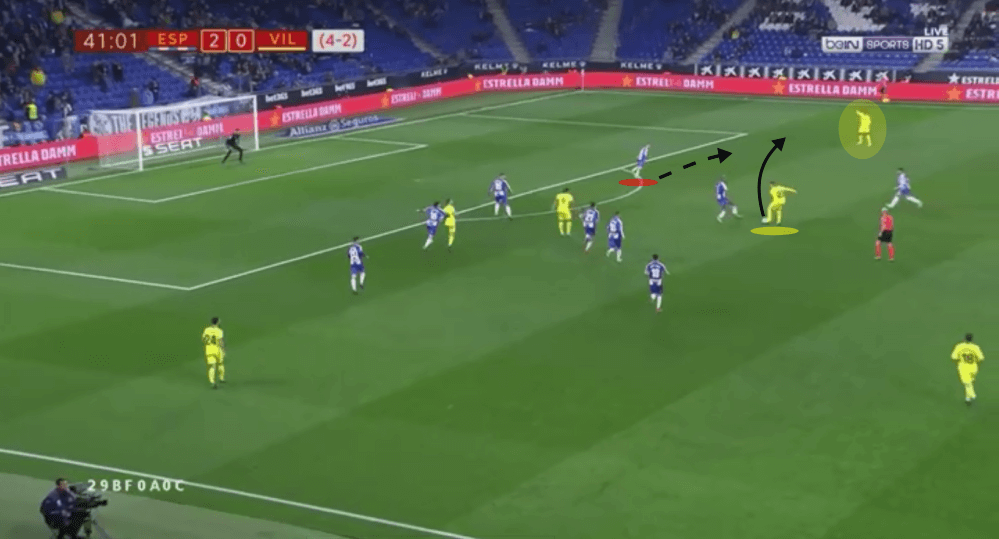 With the conditions created for a shot on goal, Chukwueze curls the ball into the far corner to get his team back in the game. 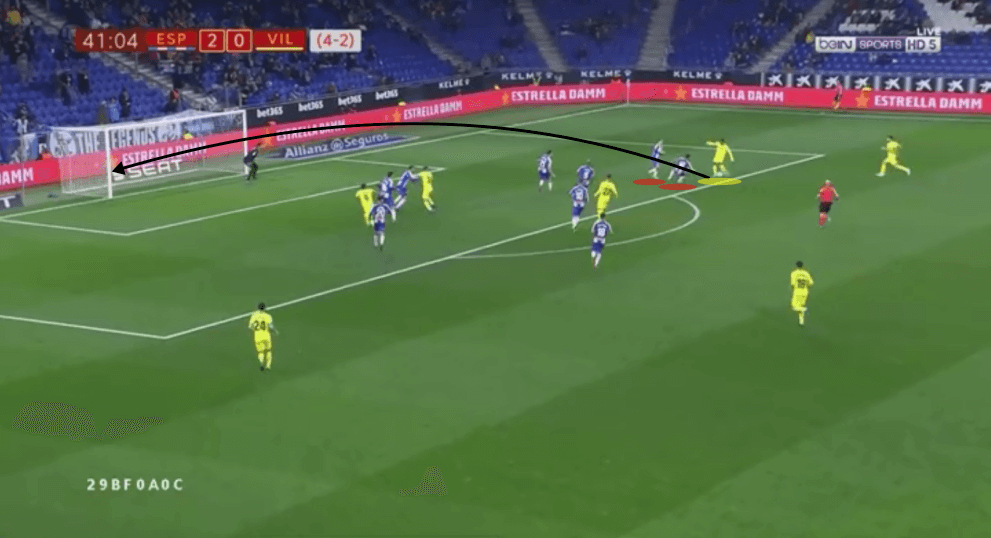 While we frequently see him cut infield and shoot from outside the box, Chukwueze has only managed to score three times in 17 games so far this campaign. As we’ve discovered in Robben’s case, predictability in terms of dribbling inside and releasing a shot doesn’t exactly make it any easier to stop.

Throughout Chukwueze’s career, we can expect to see this sort of action. However, over-reliance on his left foot tends to result in him cutting infield even when the scenario calls for a progression down the outside. If he can become more versatile in this regard, he is sure to become a productive winger at the highest level.

In terms of defensive contribution, he has also impressed, turning over possession for his side 4.43 times per game. He is generally diligent in supporting his full-back without the ball, albeit occasionally making late recovery runs, and allowing the opponent’s left-back to arrive in the final third on his blind-side.

Despite reported interest from across the continent, Samuel Chukwueze might be best placed remaining at the Estadio de la Ceramica for at least another season. Assuming they manage to avoid the drop, Villarreal can offer him regular game time with which to develop further.

If he can become more consistent with his final actions, as well as adding another dimension to his profile, Chukwueze has the potential to become Nigeria’s leading light in the coming years.