The clash between two of the favourites to reach this year’s Champions League Final, Atlético Madrid and Juventus, was among the most anticipated fixtures of the competition’s last 16 stage. When you think of the greatest defensive sides of the modern era, these two clubs come to mind more than most, and both still boast some of the best defenders in world football.

Atleti have never been European champions, having been losing finalists on three occasions. But with the final to be played in their new home this season, tangible evidence of Los Rojiblancos desperation to make this year’s campaign their greatest ever was felt in the fervent atmosphere inside the Wanda Metropolitano ahead of kick-off.

Atleti came into this match having only won four from their last nine games. They have won their last eight home games in UEFA competition though, conceding only one goal at home to boot. Their Italian visitors, Juventus, had only won three of their last nine games in Spain. The two-time European Champions have had a near untouchable season in Serie A but stuttered a bit toward the end of their Champions League group stage.

What was a very tough game to call ahead of kick-off, despite Juve’s favourable odds, was decided ultimately by simplicity, energy and fight on the part of the home side as Atlético Madrid ran out 2-0 winners. We take a look at the tactical differences between both teams and how Diego Simeone’s Atleti managed to stifle their favoured opponents to gain a vital advantage ahead of the tie’s second leg. 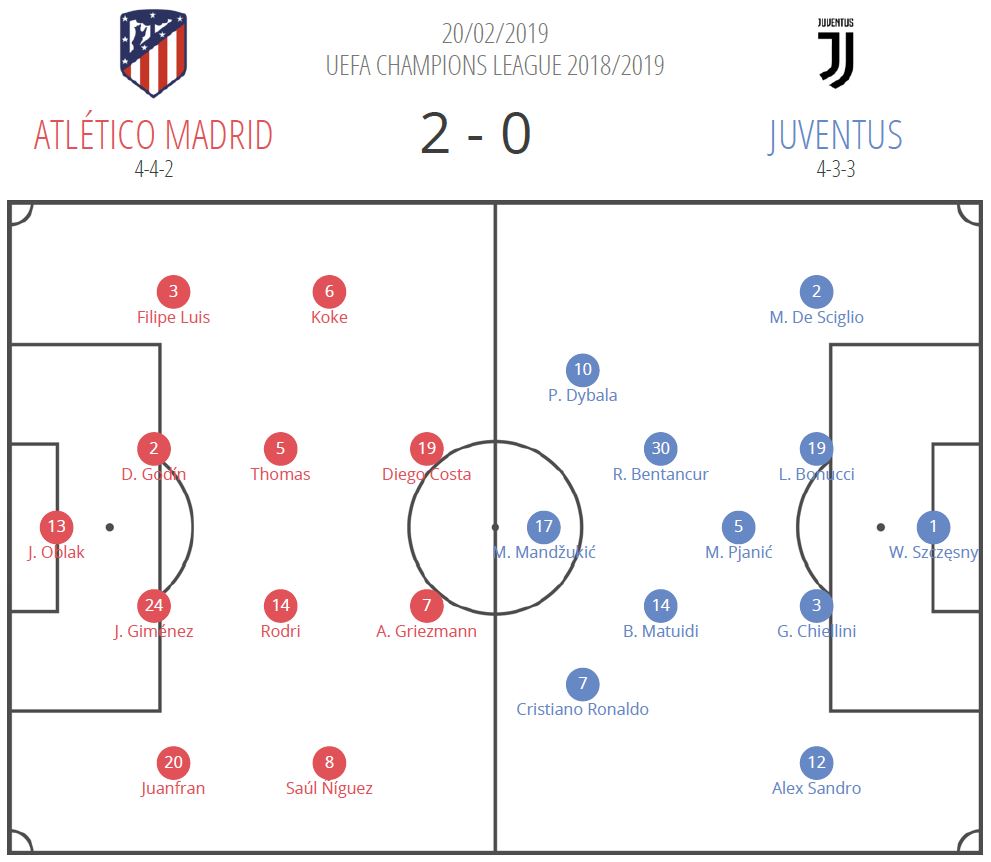 There were no surprises in Atlético Madrid’s line-up. Their customary 4-4-2 formation is synonymous with their hard-working, disciplined defensive block. Jan Oblak is one of the game’s best between the sticks and is guarded by the tough Uruguayan centre-back partnership of Diego Godín and José Giménez.

Four quality midfield players are deployed across two central and two wide midfield roles, with defensive understanding paramount in Simeone’s starting XI selection. Diego Costa and Antoine Griezmann, who has 10 goals in his last 11 appearances, are two top-class strikers. The pair combined to create havoc for the Bianconeri defence throughout the night.

Speaking of the visitors, Massimiliano Allegri didn’t opt for many surprises in his team selection either. Their 4-3-3 formation has been favoured on their big European nights so far this season, containing a front three who can all interchange positions comfortably and which contains a certain Cristiano Ronaldo. Mr Champions League himself has haunted Atleti plenty during his years at their city rivals Real Madrid, having been directly involved in 30 goals from 31 games against Los Rojiblancos.

The Juve midfield is anchored by Miralem Pjanić, a glorious passer and key to the away side’s build-up play. Behind him, Giorgio Chiellini and Leonardo Bonucci make up arguably the best defensive pairing in world football currently.

Atleti: A well-drilled side who just love to defend

To nobody’s surprise, the match began in an intense manner and even included a penalty shout for the home side within the first two minutes. Diego Costa is showing no signs of mellowing as he ages and looked up for the inevitable physical clash with Chiellini and Bonucci.

Typical of a big team away from home, Juventus wanted to slow the game down, keep possession and calm the fervour of the home side and their fans. Pjanić was the focal point in the build-up phase, sitting deepest of the midfield three while Bentancur and Matuidi pushed forward. Ronaldo and Dybala held wide positions, but neither were looking to get in behind their full-back. Instead they came deep looking for a pass.

Juve’s full-backs weren’t the adventurous sort in the early stages either. Both often sat behind the ball in attacking phases, perhaps wary of the double threat Atletico possess up front. All of this played perfectly into the hands of Simeone’s team. Their full-backs didn’t have any threat to their outside, their centre-backs had no threat running in behind them and Juve were not aggressively attempting to circumvent their narrow 4-4-2 block.

To add to this, Atleti’s midfielders pressured the ball carrier relentlessly when in the central channels of the pitch. The slow passing of Allegri’s side made Atleti’s pressing look like a  training drill; one player after the next invited a pass before closing down the man with the ball.

So aggressive was their midfield press that there was often a large gap between their back-four line of four in midfield. Juve’s lack of space-exploiting runs in forward areas left little risk for Atleti though.

Atlético Madrid’s two banks of four in their recognised 4-4-2 block consequently create rectangular shaped defensive units across the block. These units are set pressing traps, coiled to collapse onto any player who runs into or receives within. As Juventus looked to play direct passes into the feet of Mandzukic and Ronaldo, these pressing traps were in full effect and made the isolation of Juve’s forwards felt by the away side.

When Juve did play into wide areas, Atleti’s wide midfielder and full-backs pressed the man on the ball from out to in, curving their runs to cut off other wide options or wide spaces and funnel Juventus back into the midfield, where their pressing traps awaited. Simeone’s side carried this out in relative comfort due to the lack of pace Juve had in wide areas.

An even first half finished 0-0 and while Juventus dominated possession, the Bianconeri couldn’t conjure a decent chance from open play while Atleti looked comfortable playing within the defensive phase.

Attack is the best form of defence

As the saying implies, having a strong attack can put your opponent on the back foot and make them hesitant to commit bodies forward in possession. With Juve’s attack stifled, their build-up play became more hesitant and thus, easier for Atleti to win the ball in high areas.

A 4-4-2 when defending, Atleti’s formation morphed into a 2-4-2-2 when on the attack. Central midfielders by trade, wide men Koke and Saul inverted their positions ahead of the central duo of Thomas Partey and Rodri while full-backs Luis and Juanfran provided the width on either side.

Atleti’s build-up play was patient in the first half as they looked to manoeuvre the ball into crossing positions before looking for the head of Diego Costa or Antoine Griezmann. But getting the better of Chiellini and Bonucci in their own box is among the toughest tasks this game can throw at you and Atleti weren’t finding much luck in terms of chance creation.

Diego Costa then took a change of approach. He shifted over to the left side and targeted Juve’s right-back, Mattia De Sciglio, looking to get the better of him physically. The move looked to have paid off in the 27th minute when Costa got the better of the Italian right-back only to be tripped up and awarded a penalty. However, VAR intervened and correctly decided that the foul took place outside the 18-yard box.

Perhaps in response to the lacklustre Juventus attack, Simeone’s Atleti began the second half with a more direct approach and would soon create the game’s only two big chances from open play. The first came in the 50th minute following poor ball-control from Chiellini inside the Atleti half, leaving the Juventus backline exposed.

Griezmann pounced on the loose ball and played a perfect first-time pass into the path of Diego Costa who got the better of Bonucci for pace but scuffed his shot woefully wide when one-on-one with Szczesny.

Griezmann would then be in on goal himself minutes later, exposing further disorganisation in the Juve ranks. Chiellini’s clearance was met by Godín on the halfway line and headed back centrally. Playmaker Koke had evaded marking from the out-rushing Juve defence and played a first-time pass into the anticipating French forward Griezmann. His attempted lob was palmed onto the bar by Szczesny, and the rebound cleared by Chiellini.

Juventus had somehow survived two big opportunities in the space of a few minutes for the home side. Sensing blood, Simeone made attacking substitutions, bringing on Lemar, Correa and Morata. The latter would have the ball in the back of the net in the 70th minute only for the goal to be overruled by VAR. The former Real Madrid man was ruled to have shoved Chiellini in the back.

The pressure from Atleti became too much to handle for the Bianconeri and led to the game’s official opener in the 78th minute. A corner kick was met by Alvaro Morata whose header ricocheted off a defensive leg and into the path of José Giménez to pounce upon: 1-0 Atleti.

The roof was lifted and the pressure continued with subsequent corners in Atleti’s favour. An 83rd-minute free-kick was whipped toward the near post and glanced on by Godín. Another favourable deflection fell the way of the Uruguayan once again as Godín volleyed home the second of the night.

A 2-0 scoreline can occur in any game but the surprise is that it didn’t flatter Atlético Madrid in the slightest. Diego Simeone’s game plan was the perfect foil to Juventus’ slow, patient build-up that had no real focal point. Atleti’s midfield pressing traps caught Juve out time and time again while the forward duo of Griezmann and Costa asked questions of the Juve defence.

Ultimately, however, the game produced little goal-mouth action from open play as two rugged defensive units failed to concede much ground. Desire and a sheer will to win were far more evident in the home team toward the end of this game, and produced one of Atlético Madrid’s most memorable European nights.

Simeone’s side take a two-goal advantage to Turin in the second leg knowing this tie is far from over. However, an equally solid and energetic defensive performance will make it very difficult for Juventus to overturn the deficit. Atleti are arguably the last team in world football you’d want to turn a 2-0 deficit around against, and they proved why on this night.