How France dissected a defensive Iceland

France welcomed Iceland to the Euro 2016 final venue on Monday night. France are easily the strongest team in the European Championships qualifying Group H, with Iceland and Turkey expected to battle for the second qualifying position. Didier Deschamps has kept faith with the group that won the World Cup less than a year ago, preferring to stay largely with his veterans.

France finished second in their group in the UEFA Nations League, with the Netherlands winning the group, and there have been calls for Deschamps to bring more youth into the side. After the heights of Euro 2016 and qualifying for Russia 2018, Iceland have come back to earth. They struggled in the Nations League, getting relegated from League A without claiming a point. They started off their Euro 2020 qualifiers with a win away to Andorra, but that was their first win since 14 January 2018.

France were expected to win, but this proved to be an excellent test for the Les Bleus. Iceland are exactly the type of side that France have struggled with, as they defend deep and look to hit on the counter. Deschamps has stuck with largely the same side as in the summer, and the familiarity has worked in their favour. The movement and attacking patterns of France worked well against the packed defence of Iceland.

Iceland never presented much of a threat on the attack, but France were able to move through the Icelandic block successfully on several occasions. After taking a 1-0 lead in the first half, Les Bleus lost focus for a period, allowing Iceland to have more of the ball. It wasn’t until the second half when France continued the good work they had had success with in the first half. A second goal for France in the 68th minute put the match to bed, as Iceland struggled to create anything. France won 4-0, with four separate goal scorers. 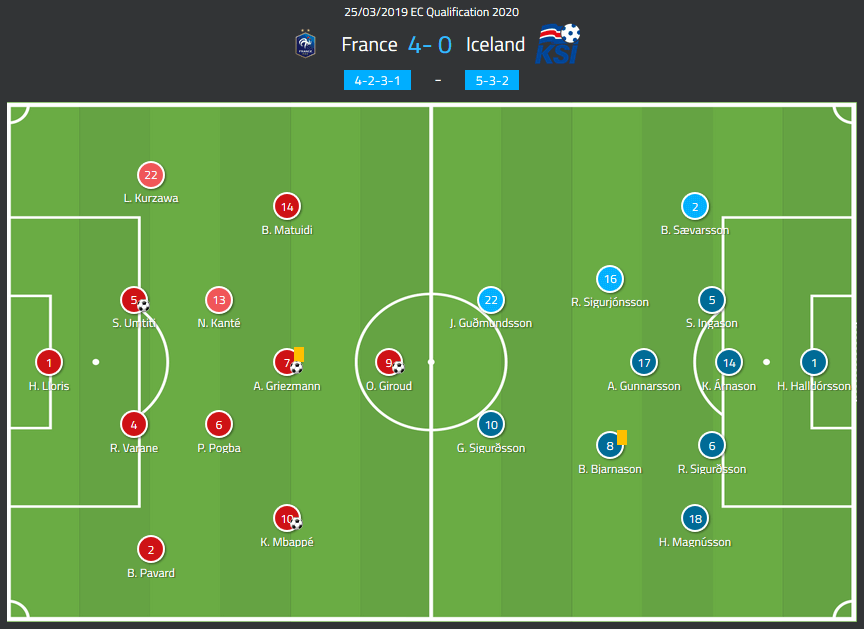 Didier Deschamps made no changes from the side that defeated Moldova 4-1 away in the first match of their Euro 2020 qualifying campaign. There was only one change to the side that defeated Croatia 4-2 to win the World Cup, with Lucas Hernandez missing through injury and his left-back spot being taken by Layvin Kurzawa.

Erik Hamren made four changes from the side that won 2-0 away to Andorra in their first qualifying match. Switching from a 4-4-1-1 to a 5-3-2, we saw Albert Gudmundsson play up front in place of Alfred Finnbogason. In midfield, Runar Mar Sigurjonsson came into the side for Burnley winger Johann Gudmundsson, who left the Andorra game with a knock. Armor Sigurdsson and Ari Freyr Skulason dropped to the bench and were replaced by Hordur Magnússon and Sverrir Ingi Ingason.

We will examine some of the tactical points that allowed France to secure an easy 4-0 victory against a defensively sound side in Iceland. First, we’ll look at how France’s midfield performed as a balanced machine. Additionally, we’ll examine how France played with width and a presence in the half-space that made it hard for Iceland to cover. We’ll also look at the role Kylian Mbappé has in the French attack. Finally, we’ll look at how France were able to restrict Iceland’s counter-attacks.

A midfield of superb balance

As they won the World Cup, France were a disciplined side but were rarely dominant. They were frequently willing to allow the opposition to control possession, looking to play a medium block so they could use the speed of their transitions to get at their opponents. With the speed and guile of players such as Antoine Griezmann, Kylian Mbappé and Paul Pogba, they had success in Russia against stronger sides. However, against weaker sides who were willing to defend deep, they struggled to produce effective displays.

France entered this match playing a 4-2-3-1, with a midfield pairing of Paul Pogba and N’Golo Kante. Kante returned to a pure defensive midfield role that he’s excelled in, rather than the more box-to-box role he has fulfilled for Chelsea this season under Maurizio Sarri.

Manchester United‘s Paul Pogba struggled early in the World Cup last summer in a midfield two. He was often playing too far from the opposition goal, unable to significantly influence the attack, but the change of bringing in Blaise Matuidi as the nominal left-winger has helped Pogba produce dazzling displays.

Matuidi plays on the left side, but he plays deep and narrow to help Kante in midfield as Pogba gets forward into dangerous positions. While he provides the occasional attacking run in behind the defensive line, his main contribution to the side has been his work rate and selflessness. His willingness to sacrifice himself for the team has been why he continues to get caps for France over arguably more talented wingers.

France with width and no retreat

France had plenty of possession early in the match, but they were unable to craft many open chances. As the image shows below, early in the match Kurzawa took up advanced positions on the left side but Benjamin Pavard stayed deeper on the right side.  As a natural centre-back, Pavard was more hesitant to get forward and it took 15 minutes before he became more aggressive with his positioning. 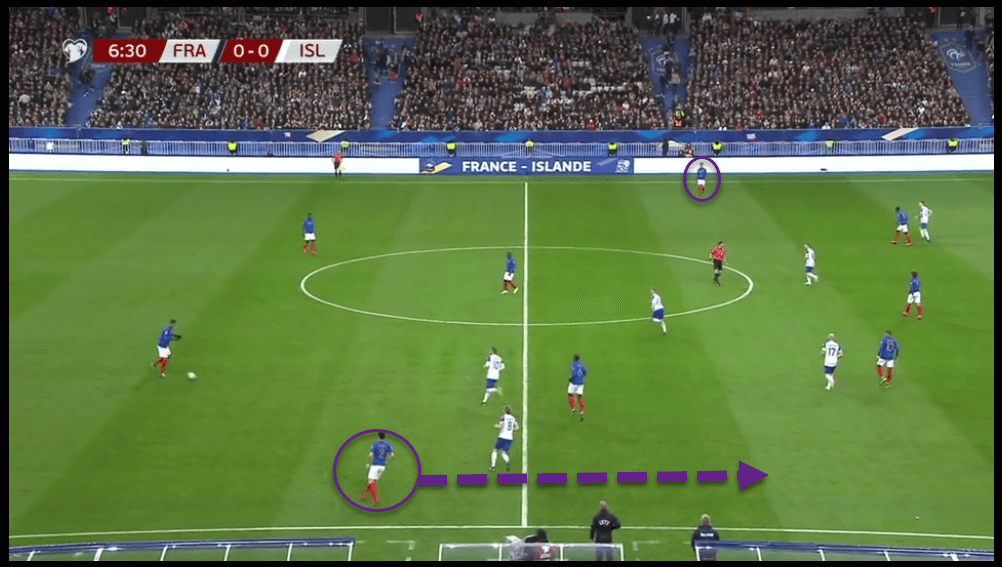 Once both full-backs started getting higher up the pitch, the French attack had more width. Matuidi tucked inside on the left to support the central midfield, so Kurzawa provided most of the width on the left flank.

On the right, once Pavard started to play higher up the pitch, Mbappé played more inside and took up almost a free role. He drifted across the pitch, finding pockets of space where he could receive the ball and turn to attack the Icelandic defence.

As the image above shows, we can also see how Griezmann and Giroud fit into France’s attack. Giroud continues to start for Les Bleus, even though he has struggled for playing time in the Premier League. One of the reasons for this is his ability to combine and link-up with Griezmann and Mbappé.

He is also more prolific for France than he has been for his club, which included a goal against Moldova and the second goal in this match. With Giroud up front, France can exploit his ability to play clever through-balls and the one-touch play that makes excellent use of the movement of Mbappé.

Griezmann plays in a number 10 role for France, but he is much more of a central winger. He drifts from touchline to touchline, and this space is available as Matuidi sits deeper and Mbappé also drifts across the pitch. Griezmann is effective getting into the half-space, and has the skill to receive the ball in tight spaces to combine with Giroud and Mbappé.

As the match started, Kylian Mbappé lined up on the right. He continued to operate largely in this area until 15 minutes into the match, when Pavard was instructed to get more involved in the attack. With Pavard playing higher up the pitch, providing the width on the right flank, Mbappé took up more of a free role in the attack.

He delivered a man-of-the-match performance against Iceland in this role, delivering one goal and a pair of excellent assists. Mbappé has shown unbeatable speed and a willingness to run at defences, which was an important tool in dealing with a massed Iceland defence. However, his passing was equally important in this match. In addition to creating chances for himself, his passing also created opportunities for his teammates.

With only 25% possession, Iceland couldn’t offer much going forward. Iceland’s recent success has been built on a compact 4-4-2, but Hamren switched to a 5-3-2 for this match. This formation made it plain that they intended to defend in a deep block, trying to congest the central areas and limit space.

As a result of their deep block, they were reduced to trying to pinch chances from set-pieces and Aron Gunnarsson’s long-throws. They had very little attacking success, as they switched into a 3-5-1-1 on the attack with Sigurdsson operating in the number 10 role behind Albert Gudmundsson.

In addition, the wing-backs were hesitant to move up the pitch in the attack and offer France counter-attacking opportunities. This resulted in Iceland having only four shots, compared to 15 for France.

With a 4-0 victory, France started off their Euro 2020 qualifying campaign with six points. They also showed that they are better equipped to deal with deep defensive blocks than they were during the 2018 FIFA World Cup. The displays of Paul Pogba, Olivier Giroud, and Kylian Mbappe will do much to encourage French fans for the rest of the qualifiers.

Iceland, on the other hand, struggled to contain a rampant attack. While they have defended well against better sides in the past, they always presented a dangerous counter-attack. That was absent in this match, as they were too defensive without offering a threat going forward.

This lack of threat allowed the France full-backs to get higher up the pitch without worrying about leaving space in behind them. Erik Hamren will need to adjust his formation and tactics in future matches if his side are to continue their run of attending major tournaments.