How England towered over Montenegro in five-goal comeback

Gareth Southgate and the England national team flew to Podgorica, the capital of Montenegro for their second Group A Euro 2020 qualifier. They confronted Montenegro before an attendance of 8,329 at the Podgorica City Stadium.

Although Montenegro started off on the front foot, scoring past the quarter-hour mark, England came back to dominate the game and replied with five goals. In this tactical analysis we see how both teams played, using statistics to compare individual player performances.

Southgate’s objective during this international break was to give some of the younger promising talent crucial minutes. In the previous fixture against the Czech Republic, Dortmund’s Jadon Sancho was given a stage to shine on for 90 minutes. In this game, Callum Hudson-Odoi was given a full game. Southgate risked playing 20-year-old Declan Rice as the lone holding midfielder in place of Eric Dier who picked up an injury.

Southgate’s squad boasts incredible talent playing regularly under top managers in the Premier League. Perhaps his challenge with the national side is to ensure the system he employs extracts the most out of his players. England have endured a history of criticism of being unable to find the right formula to make some of the best players in the game work together for the national side. But Southgate seems to be changing that stereotype with his results. 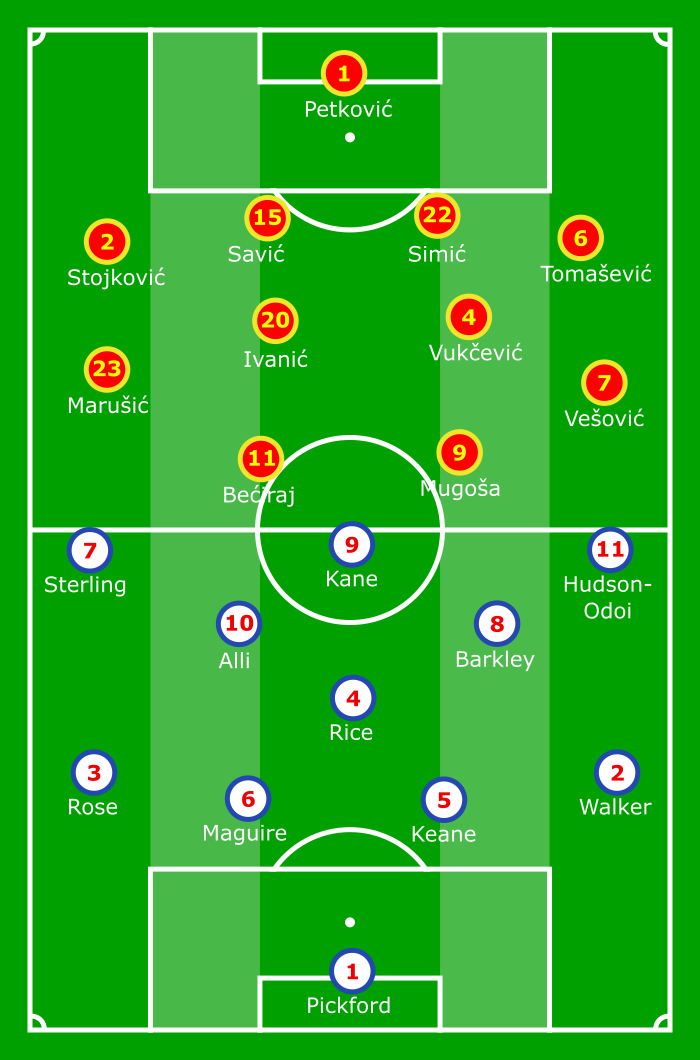 England played a 4-1-4-1 against Montenegro’s defensive 4-4-2. Montenegro played directly and focused on exploiting qualitative superiority over England’s inexperienced players like Hudson-Odoi and Rice. England found a clever way to have experienced players cover for the younger ones in spaces all over the pitch

Mauricio Pochettino, Manuel Pellegrini, Maurizio Sarri, Pep Guardiola, Jurgen Klopp and Marco Silva: these are the big names under whom this English side thrives in the most competitive football league in the world. Each of these coaches uses different systems of play. Southgate identified the 4-1-4-1 to strike a fine balance among his chosen players.

Declan Rice was protected well by Kyle Walker playing almost entirely as an inverted full-back in the first half. Danny Rose also picked the right moments to defend the crosses coming in by tucking inside, while the English wingers kissed the touchline.

The wingers Raheem Sterling and Hudson-Odoi were given freedom to rotate with surrounding players. Ross Barkley played as the attacking midfielder that he is used to with Chelsea where Jorginho sits deeper. Harry Kane and Dele Ali played in very similar positions that work successfully at Tottenham.

Montenegro were clever in identifying Rice and Hudson-Odoi’s inexperience for the national side. They closely marked the two denying them space. With these two playing in vital positions in a 4-1-4-1, Montenegro also forced England to constantly play through them in tight spaces.

When progression was difficult from the back, England would seek the long direct ball to Harry Kane. Having the seasoned Stefan Savić of Atlético Madrid at the heart of Montenegro’s defence quelled any aerial threat. Kyle Walker would often tuck in very centrally to support and find passing options. But Hudson Odoi was denied a lot of room to distort Montenegro’s organised shape.

The English centre-back duo took a while to establish rhythm and communication while defending. Quite often England were caught flat-footed and ball-watching in defensive transitions. With Rice boxed in by the strikers, Marko Vešović found a lot of space to receive the ball in front of the English defence. He successfully exploited one such opportunity to dribble into the penalty box and curl the first goal into the bottom right corner.

Although England did show moments of dominant possession from the beginning, Rice was closely marked by Stefan Mugoša. As a result, the forward players missed a vital link to connect with the defence, unless Barkely dropped deeper to fill in.

Although the statistics boost Rice’s performance to a higher ranking, he did struggle with his positioning. He did not appear as comfortable playing in the holding role as he usually does with West Ham. It was alarming to observe the lack of communication at times with Harry Maguire, as both Rice and he almost collided in the same space.

Aside from the challenge of being closely marked, he was often isolated in midfield. Dele Alli, whose game was unremarkable overall, moved quite high up alongside Kane in attack leaving big spaces for Rice to cover on the left. Although having Barkley and Walker beside helped Rice, he found it challenging to identify moments to attack players zonally while defending.

Despite the huge responsibility resting on this shoulders to cover a vital position for England, he played astutely. His ability to keep it simple in difficult situations was reflected in his noteworthy statistics. He had a high pass accuracy as most of his passes were played back to the defenders. He also relied on the experienced players around him wisely and did not allow himself to be too isolated. Although his game was far from perfect, he made up for any errors by immediately showing an urgency to win the ball back.

If it was Jadon Sancho whose performance was lauded in the previous fixture, Hudson-Odoi made a name for himself in this game. His statistics during this game speaks for themselves. He won all his tackles and made an interception, but his real impact came in possession.

Despite his advanced positioning, he boasted an impressive 90% passing accuracy and took 79 touches, completing five take-ons and creating three chances created. Most importantly of all though, he took two shots, one of which was on target, and provided one assist.

Even though he was heavily marked on the right flank at the beginning, he was able to adapt well as the game progressed. Southgate made an important change by switching flanks for Hudson-Odoi and Sterling after conceding the first goal.

On the left wing, Hudson-Odoi found a lot more room to manoeuvre, often tucking inside with Danny Rose overlapping him. Inverting as a winger also lent him a significant advantage in defensive transitions thanks to his ability to track back immediately alongside Kane.

Ross Barkley and Jordan Henderson were two players seriously looking to lay down markers during the international break. They face stiff competition for regular starting spots at Chelsea and Liverpool respectively.

Barkley’s game was on a whole new level against Montenegro. His immense work-rate going forwards and defensively qualified him as a thorough box-to-box midfielder. It would be safe to say that he even shouldered Dele Alli’s midfield work during this game. His sublime technique in crossing the ball was also a highlight with the free-kick assist that helped England equalise. Although Hudson-Odoi deserves most of the credit for the second goal for England in the first half, Barkley’s desire to get into the box at the end of it makes a statement about his performance.

Henderson, when he came on for Alli, transformed England’s midfield play. He covered more effectively for Rice allowing Rice to focus on his defensive duties. He also released many key passes with brilliant foresight and technique. Henderson is another candidate who elicits praise for his defensive desire to counter-press all over the pitch, a work ethic he displays regularly under Jurgen Klopp at Liverpool.

England were clinical while being flamboyant

With forwards possessing quality like Kane and Sterling, beautiful build-up play gets its rewards. While England exploited width in their attack, the space in the centre was left for Kane and Barkley to attack.

In the second half, England wasted no time and engaged in a fast build-up to release their forwards early and finish with clinical precision. Montenegro were still in the fight after conceding two in the first half and looked to exploit England’s defensive weakness. But after the third goal, it was indeed over and the only unfortunate battle they got tangled in was unwanted racism from the stands.

Southgate’s ability to rotate his squad effectively without sacrificing on quality deserves heavy praise. The newcomers like Sancho, Hudson-Odoi and Rice are all promising prospects for England and their performances immensely boost the nation’s flourishing talent pool.

Barkley deserved the man-of-the-match award as he was head and shoulders above everyone else. With wins over the Czech Republic and Montengro, England sit comfortably on top of Group A. It is a long way until September when England face Bulgaria, but that should give Southgate enough time to begin preparations for a full-fledged contest for a major title at Euro 2020 next year.