Admira had a 2019/20 campaign to forget as they performed throughout the whole season weaker than they expected to do. On the final matchday, they played against WSG Tirol and since these two sides were the two teams at the bottom end of the table, the loser of this match would be relegated and in the case of a draw, Tirol would have to go to Austria’s second division. The match ended 0-0 meaning that Admira will be in the Austrian Bundesliga for at least one more season.

Sinan Bakış was by far the most dangerous player in their offence with 12 goals and his performances were the main reason that they stayed in the league as they had the worst overall offensive record of the league with just 29 goals in 32 matches. As the Turkish forward joined Heracles Almelo in the Eredivisie this summer, it will be interesting to see how their offence will perform.

The 19-year-old Muhammed-Cham Seracevic could become a central player in their offence. The young Austrian joined them last summer from the second quad of the Bundesliga club Wolfsburg and showed promising but not that incredible performances in the 2019/20 season.

In this scout report and tactical analysis, we will have a closer look at Saracevic’s strengths, weaknesses, and individual tactics to discuss how he can help Admira in the future.

In the first section of this tactical analysis, we will have a closer look at his movements and where he can be mainly found on the pitch to have already a basic understanding of his style of play and from where he executes the majority of his actions. Saracevic mainly plays as a right-winger even though he can also play on the opposing side as well as in the centre. However, he can exploit his strengths the most on the right wing as we will see later in this tactical analysis and therefore, he mainly plays out wide on the right side.

This can be perfectly seen in the heatmap for Saracevic’s 16 appearances in the 2019/20 Austrian Bundesliga season which is visualised below. We can also see that he is positioned quite a lot in their own half and additionally it seems as he would like to drive to the inside as soon as he reaches the final third. 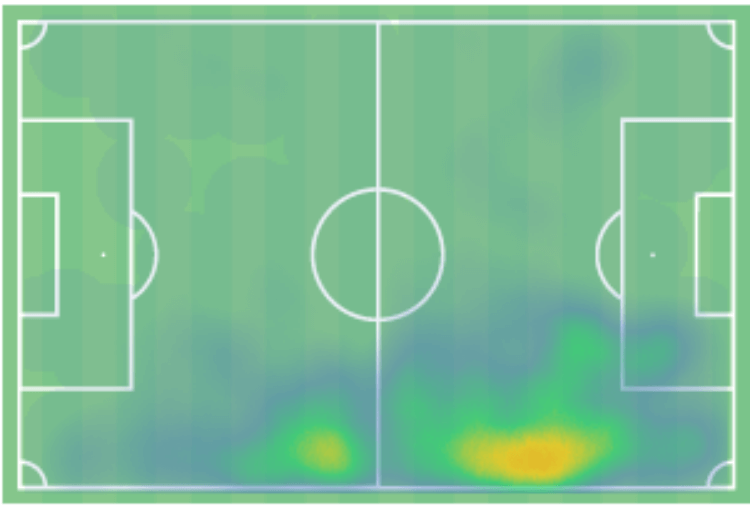 The young Austrian winger prefers to have the ball at his feet instead of receiving through pass after through pass. Since he is incredibly fast, he especially likes to exploit his speed with the aid of dribbles. Due to that, Saracevic only rarely starts deep runs and mainly stays near the touchline in the area where the middle third ends, and the final third starts. This is also the zone where he is most frequently positioned according to the heatmap above.

He sometimes comes even a few yards deeper to get away from the opposing full-back and actively demands the ball as we can see perfectly in the following shot. This is the starting position for most of his offensive actions and we’ll come back to it later in the scout report when we talk in the next section about his qualities on the ball. 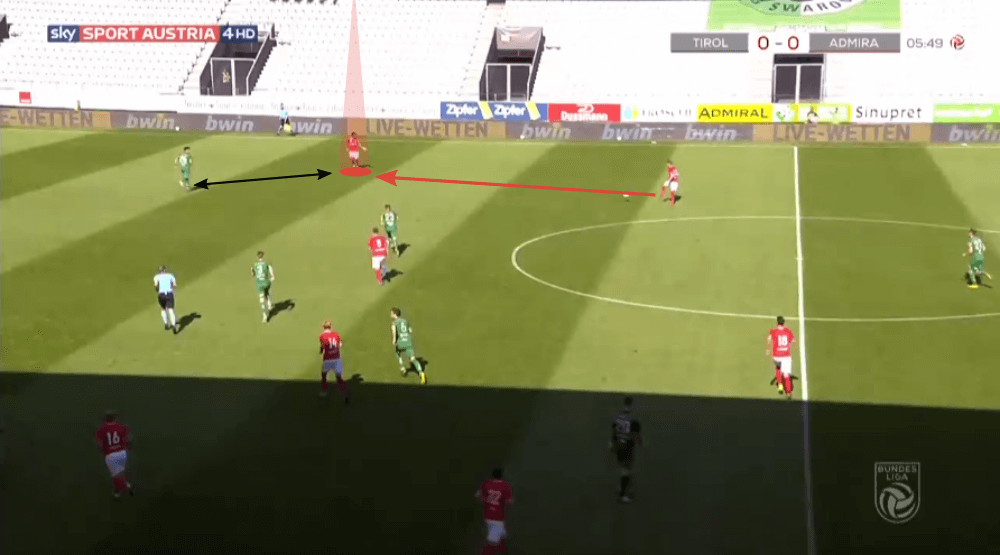 Defensively, Saracevic is very disciplined and tries to help his wide defender out of possession. Admira mainly used a 4-2-3-1 or 4-1-4-1 in the recent season and they were among the most defensive-orientated teams. They had on average of only 44.7% possession and allowed 10.8 passes before they made a defensive action (also known as PPDA). For both metrics, they are among the three teams in the Austrian Bundesliga with the “weakest” values.

These numbers show that they defended very deep quite often so logically, the wingers were part of the deep block. This also explains why Saracevic is, according to his heatmap, positioned a lot in his own half. Below, we can see an example of him as part of the deep 4-1-4-1. 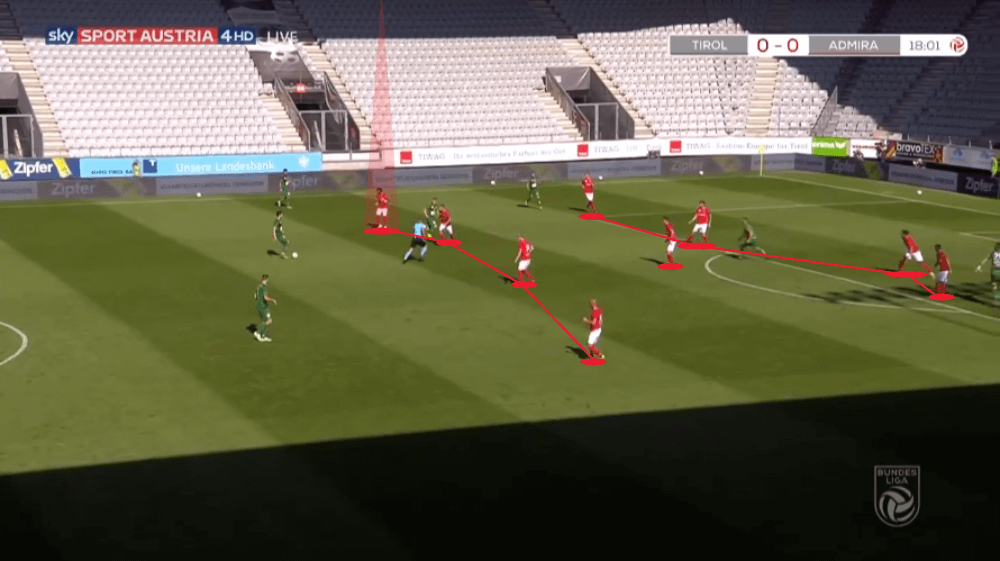 Strong on the ball

In this second part of the scout report, his qualities on the ball are the subject. Basically, his ball control paired with his intelligent movements with the ball at his feet is his greatest strength. He attempts on average 7.45 dribbles per 90 minutes which is one of the highest numbers of all wingers in the Austrian Bundesliga. However, he completes only 39.68% of his dribbles which is clearly less than the average of all wingers of the league with at least 500 minutes on the pitch (50.93%).

The fact that he attempts so many dribbles shows us that he looks in almost every situation for a solution via a run with the ball at his feet as we can see in the example below where he receives pressure from several opponents, but still manages to free himself with one move.

Even though Saracevic stands at 180 cm and is not physically strong by far, he still intelligently uses his body to shield off opponents. One central strength of the young Austrian is that he can solve different kinds of situations with the ball at his feet. When his opponent is right behind him, he tries to get his own body between the defender and the ball while he is also able to beat an opponent when he dribbles towards him.

The typical pattern which he executes when he receives the ball in the right wide-area is to cut to the inside like the former Bayern Munich and Real Madrid winger Arjen Robben used to do. The Dutch winger is the prime example of this move which marks him as one of the most famous players of the 21st century. The idea behind this kind of dribble is to have the ball on the left foot and in a perfect position for a shot.

Saracevic likes to dribble like that to the inside since he is also left-footed and then has numerous options for the following action. 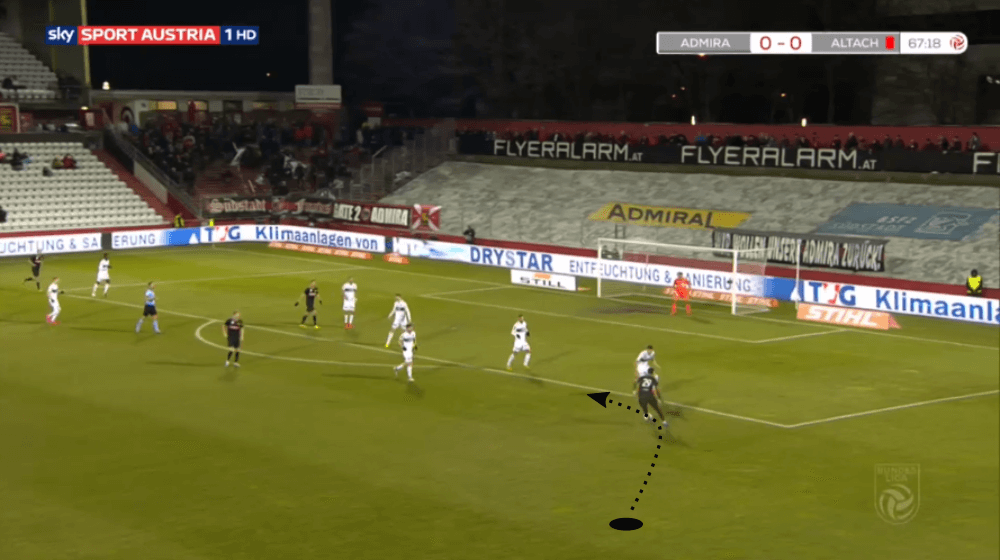 Too weak in the final third

However, even though the Austrian winger is often able to get past his opponents with this cut to the inside, he is still way too inefficient in the final third. He hasn’t scored a single goal in the recent season in 16 appearances and provided no assists either.

A key reason for that is his weak shooting as only 29.41% of his 2.01 shots per 90 minutes are on goal. The numbers show that he brings himself quite frequently into the right position to shoot with this typical movement, which I explained earlier in this tactical analysis, but they are just not precise enough.

Also, since many defenders already expect exactly that kind of dribble, the Austrian sometimes tries to make another change of direction as we can see in the example below, and this movement can be very useful to surprise the opponent. However, in those situations, he has the ball on his right foot and his precision with his weak foot is even worse. 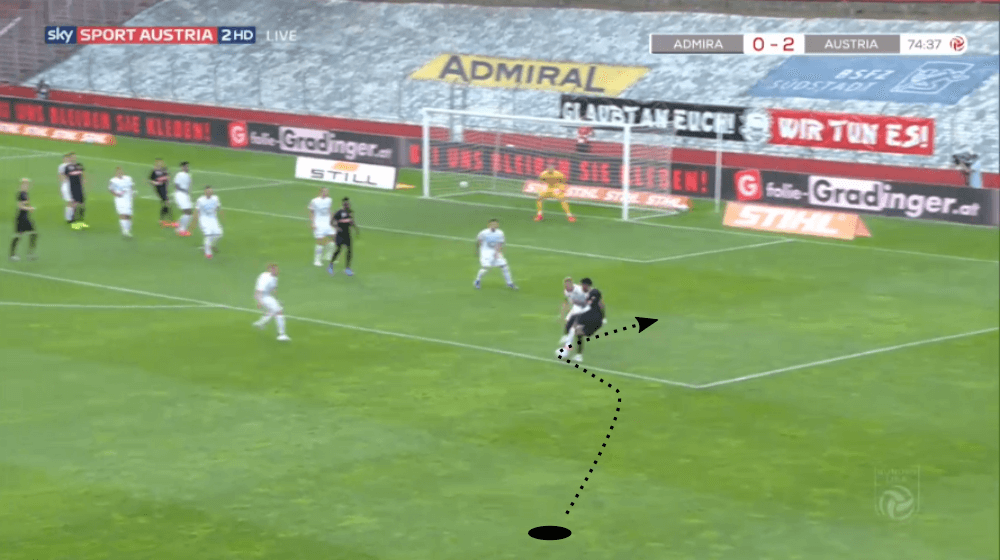 While Saracevic has decent ball control and tries to use his speed as soon as the ball is at his feet, he sometimes has problems to control the ball with the first touch. In situations like the one below during the counter-attack, this means that his bad first contact brings him from an interesting position with almost no pressure from the opposition into a way worse situation. If he can work on his first touch with the ball, he would find himself more often in good situations (especially during the counter-attack). 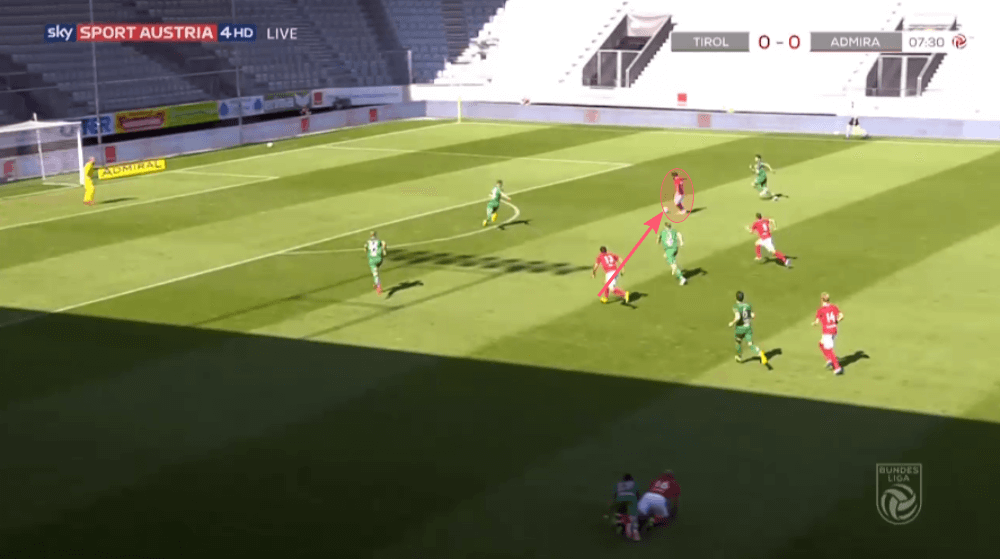 We don’t see it that often in a match, but Saracevic also has great vision and is creative when leading to some interesting passes. In some situations, he shows that off with some great through passes, but it is not that frequently that we could say that he is an incredibly creative winger.

However, he has an xA-value per 90 minutes of 0.17 which is more than the average for the wingers in the Austrian Bundesliga with at least 500 minutes in the 2019/20 season (0.16). We can see an example in the shot below as he once more cuts to the inside from the right flank to then play a decent through pass. 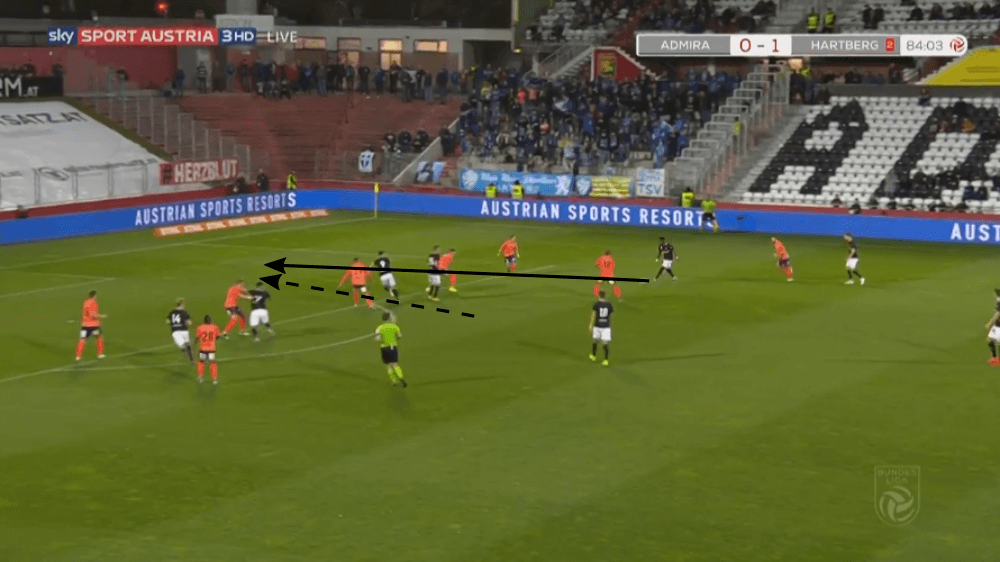 Behaviour out of possession

In the final part of this tactical analysis and scout report, we will have a look at the Austrian’s actions when his team are out of possession. As already mentioned earlier, Admira were among the three teams in the Austrian Bundesliga season 2019/20 with the highest PPDA value, meaning that they are not a team which often press in at their opponents high up the pitch.

Whenever they do so, Saracevic is a vital player due to his speed and aggression. He is involved in 5.91 defensive duels per 90 on average, wins 56% of them and has overall made 6.5 successful defensive actions per 90 minutes. All three of those values are slightly above-average for a winger in the Austrian Bundesliga, showing that he is ready to work for his team and during the high pressing he is very active as we can see below where he sprints towards Maximilian Ullmann to put pressure on him. 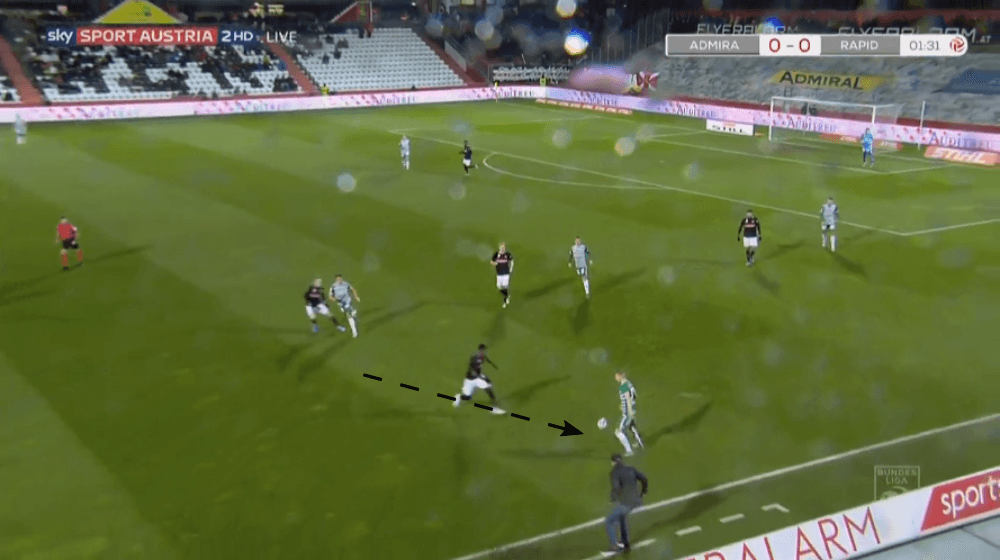 While Saracevic works hard for his team defensively, we can see in several situations that he is still young and not a defender, meaning that he does not consequently follow his opponents. When there is a lack of necessary communication between him and the full-back, this can lead to some bad situations like the one below as Saracevic doesn’t follow Tirol’s full-back while Admira’s right-back marks his direct opponent meaning that nobody tracks the deep run of Tirol’s wide player who then receives a decent lobbed through pass into the marked area. 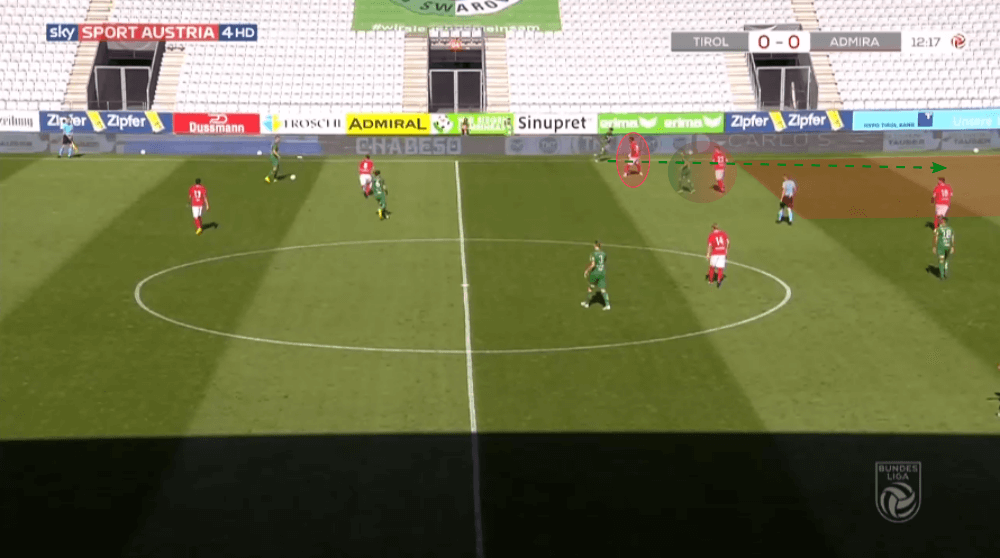 Saracevic has the talent to play a central role in this upcoming seasons for Admira, but he has to work very hard on his first touch and his shooting since these two aspects would massively boost his game if he can improve them.

He has decent ball control and speed while he is also able to work hard for his team. It will be interesting to see how much time on the pitch he will get during the upcoming campaign and if he can improve in terms of goals and assists.