The final of the UEFA Youth League produced a dream matchup, pitting the academy powerhouse of Benfica against a highly regarded Real Madrid side.

For those unfamiliar with the tournament, the clubs represented are the U19 teams of clubs represented in the UEFA Champions League group stages, as well as the youth champions from the top-ranked national associations.

To give an idea of the matchup, Benfica’s U19 UEFA Youth League squad has a listed Transfermarkt value of €6.23m, far surpassing the €$837,000 of Real Madrid’s tournament team.

Given the many gems the Lisbon club has produced in recent years, their romp to the final saw them score at least three goals in each knockout round match, holding Liverpool, Dinamo Zagreb and Ajax to a single goal. Real Madrid’s path included wins over Juventus, Inter Milan, and Red Bull Salzburg. 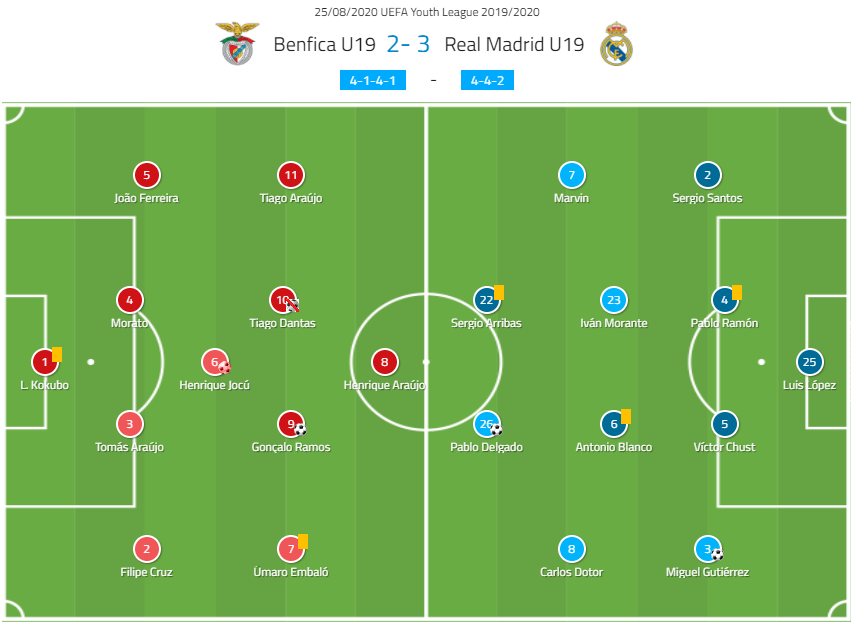 Benfica’s manager, Luís Castro, played a 4-1-4-1 formation. Leobrian Kokubo started in goal with a backline consisting of Filipe Cruz, Tomás Araújo, Morato, and João Ferreira. Henrique Jocú was the lone pivot while Gonçalo Ramos and Tiago Dantas played in front of him in central positions. Umaro Embaló operated on the right wing while Tiago Araújo played on the left, leaving Henrique Araújo up top.

This Real Madrid side is coached by Raúl González, the legendary Madrid striker who was the club’s all-time leading goal scorer before Cristiano Ronaldo arrived. Luis López earned the start between the pipes. From right to left, Sergio Santos, Pablo Ramón, Víctor Chust, and Miguel Gutiérrez formed the backline. Iván Morante and Antonio Blanco were flanked by Marvin Park and Carlos Dotor in midfield, leaving Sergio Arribas and Pablo Rodríguez as the forwards.

One of the appealing tactical features of this game was Real Madrid’s response to Benfica’s star-studded lineup. With Benfica expected to have the edge in possession and utilise a central overload with isolate wingers, Raúl’s tactics had to find a way to control the middle without leaving the side too vulnerable in the wings. Tiago Araújo’s crosses from the left wing were particularly threatening, so Raúl designed an approach to limit the distributions of the Benfica winger.

Rather than playing with the standard two blocks of four, he had Marvin track Tiago Araújo while the three remaining midfielders maintained a line. Dotor was would occasionally play at the top of a triangle, but he also defended in the left wing as well. Benfica’s 60% possession for the match kept him busy, but then Dotor defended well on the day, winning three of his five defensive duels and claiming four interceptions.

When you look at the average starting positions of the players, which is measured by the average place of their first touch, Marvin and Dotor started in similar positions. However, note that this is based on first touch, indicating that Marvin’s deep drops to cover Tiago Araújo were then followed by bursts into the open space in the wing. 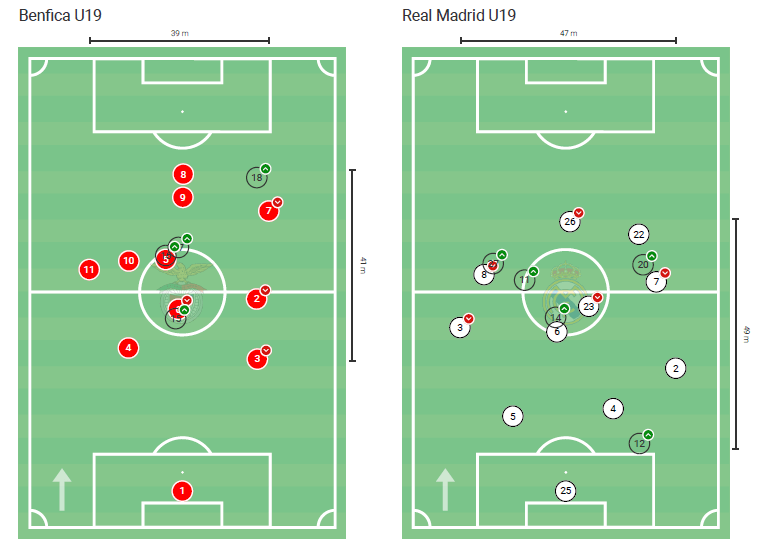 Another interesting note is the depth and width of the two teams. Real Madrid primarily defended in a middle block, setting midfield as the line of confrontation. With a 24.1 PPDA, the intent was to absorb pressure and control the middle. With Marvin dropping deep, frequently giving Real Madrid a 5-3-2 in defence, the starting positions of Ramón and Chust give an idea of how deeply the Spanish side defended. The high starting points of Marvin and Dotor also offer insight into the attacking tactics Raúl’s side implemented, but we’ll get to that shortly.

For a concrete example of Real Madrid’s middle block, the image below shows the connectivity of the forwards, central triangle of the midfielders and Marvin occupying space in the wing. 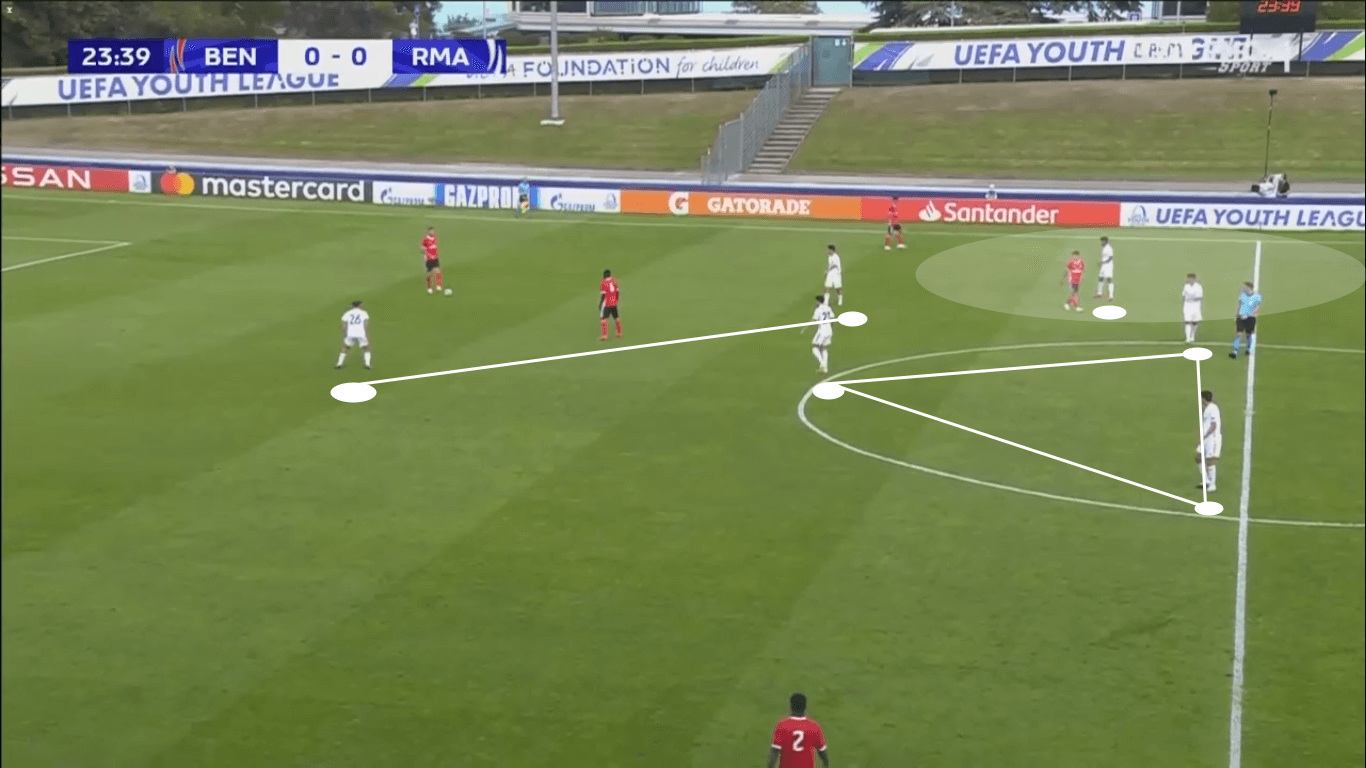 As Benfica played back to Kokubo, the press moved higher with a man-marking approach, much like the Real Madrid first team has applied this season. Notice that the press maintains its shape. The only exception is Marvin dropping below the midfield line. 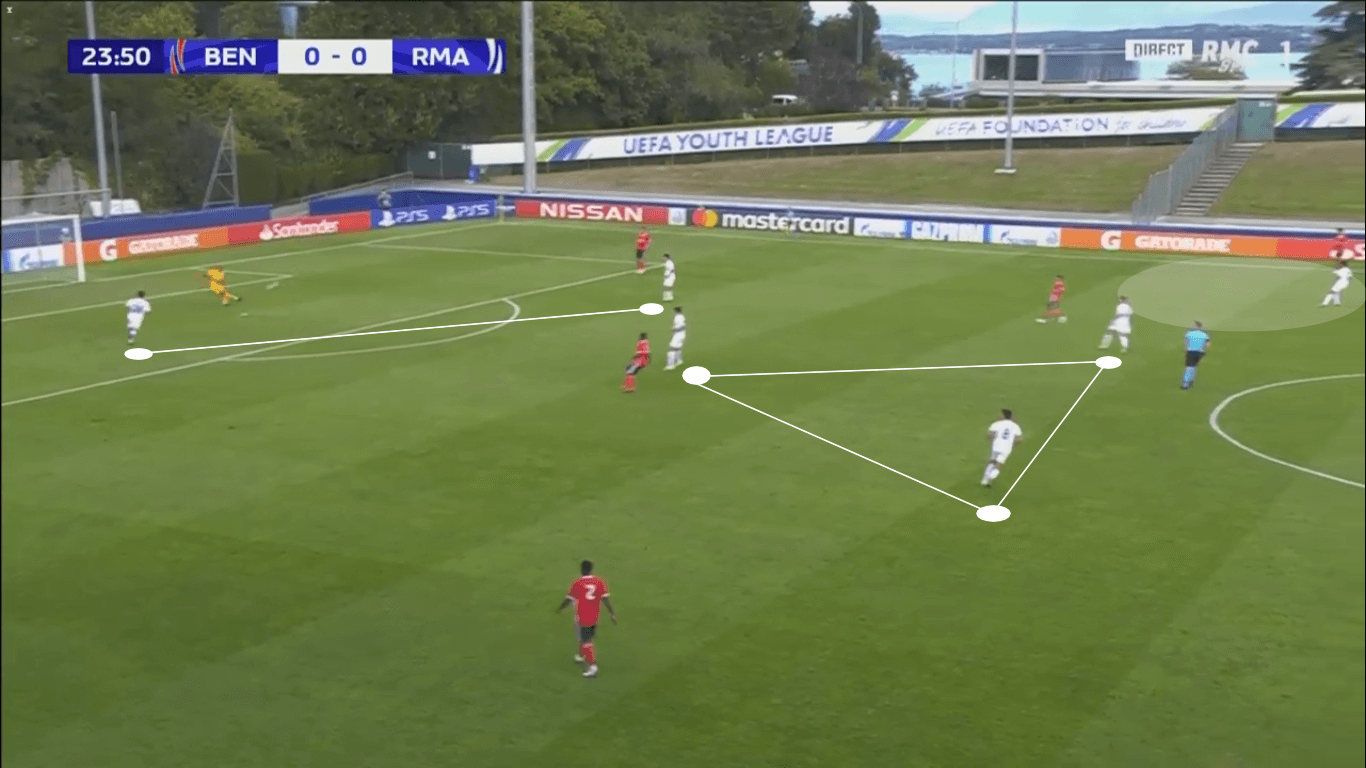 When Benfica progressed into their attacking third, Marvin went with Tiago Araújo. The image below shows the Real Madrid winger dropping into the backline to give them five defenders. Even with Marvin’s aggressive and disciplined tracking, the young Portuguese still went four for eight (50%) in crosses, four of six (67%) on the dribble, and won 13 of 20 (65%) attacking duels. 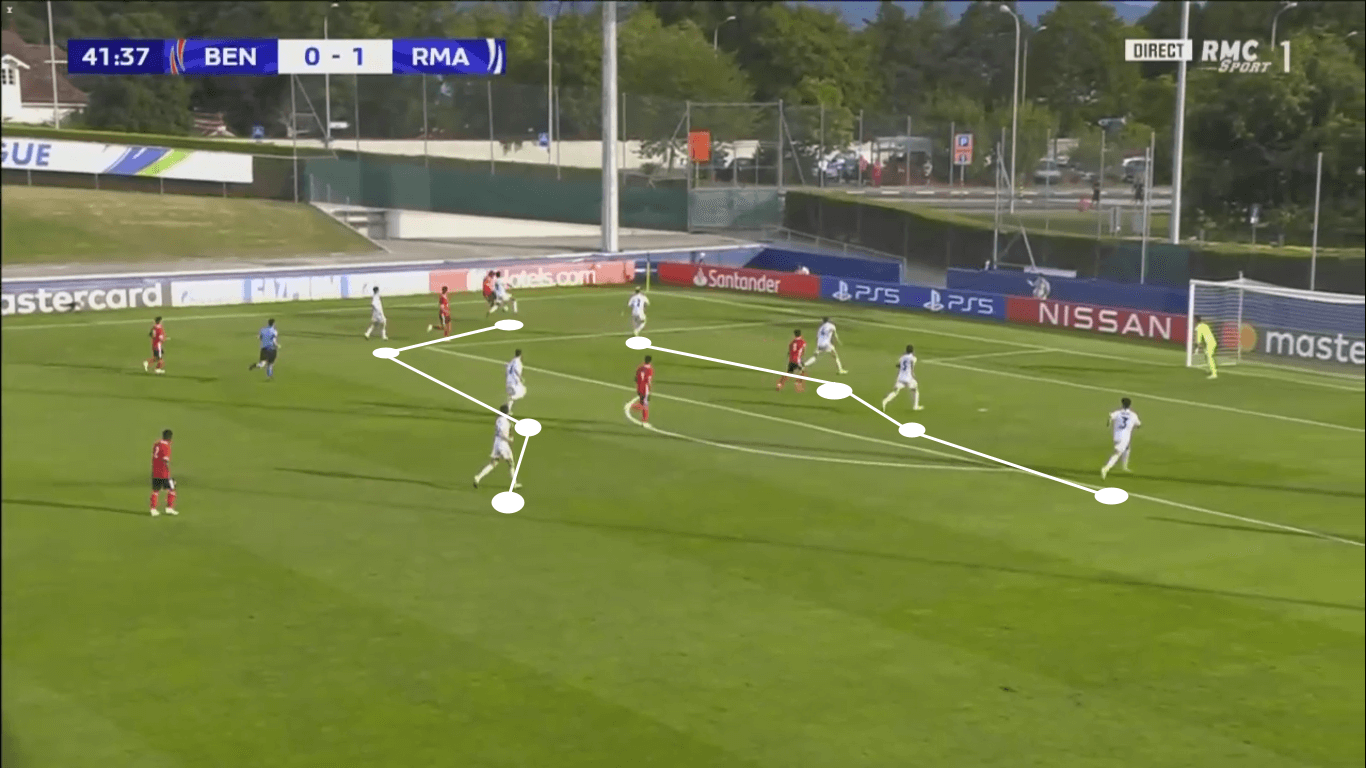 Marvin’s defensive contribution in this match was so significant that Benfica capitalised on his absence immediately following his substitution. Arribas was ball watching on the ball, not catching the run of Tiago Araújo. A simple overlap and cross led to a potential game-tying penalty kick for Benfica, one they would ultimately miss. 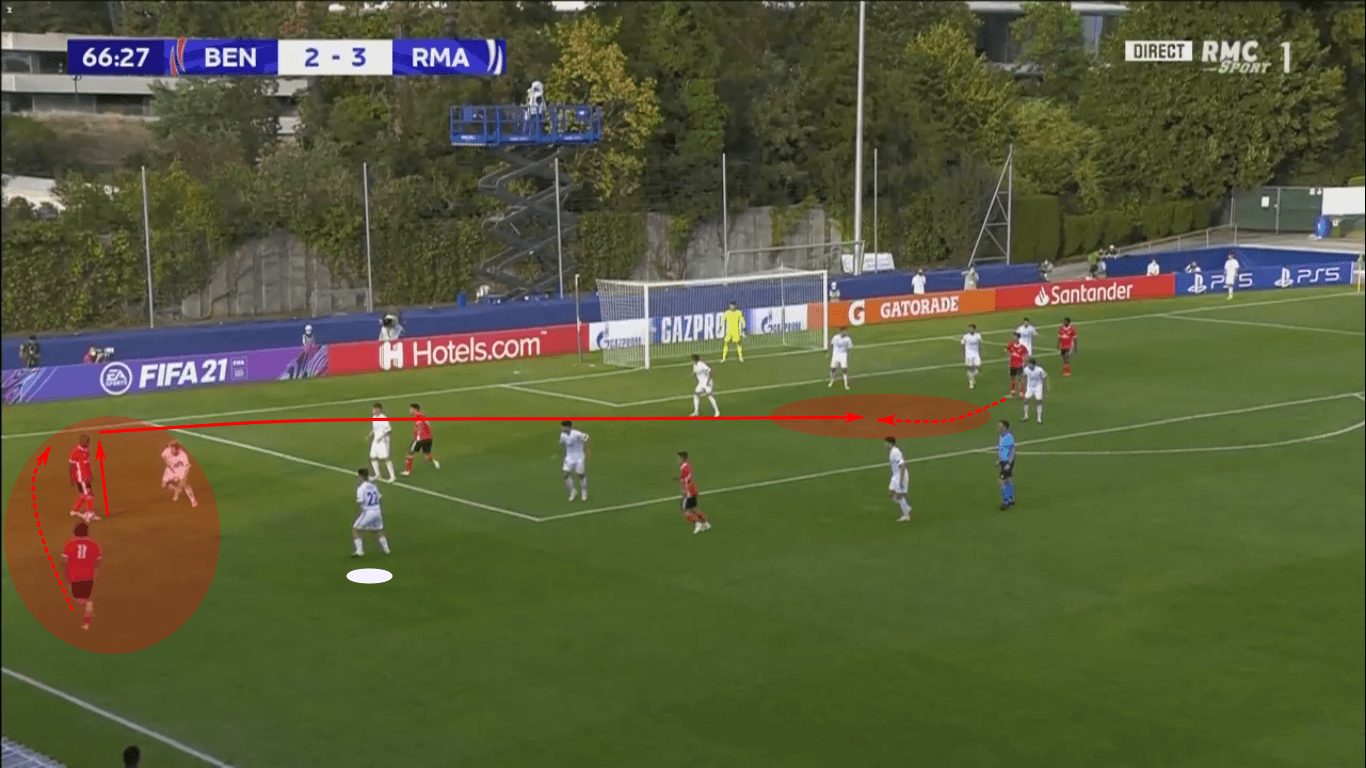 Raúl’s defensive tactics were of the bend, don’t break variety, but with a little bit of luck and poor finishing from Benfica, Madrid were able to see out the result.

Despite Real Madrid’s defensive tactics, Benfica still managed to finish the match with an extraordinary 3.67 xG (compared to Real Madrid’s 0.81). 1.47 xG came from the sequence leading to Ramos’ first goal and another 0.76 xG for the penalty, which brings us up to 2.23 xG, but that still leaves 1.44 xG on the table, which is an above-average tally in itself.

In addition to dominating possession and the quality of chances on goal, Benfica also managed to outshoot Real Madrid 15 to seven (six to two in shots on target) and record 51 attacks to Madrid’s 26.

Tiago Araújo’s significance was already covered, but Benfica’s positional play deserves far more analysis. With Real Madrid typically defending in their own half of the pitch, let’s focus on how Benfica’s attack approached the Madrid press.

Jocú would drop between the two centre-backs to participate in the build-up. As seen in the image below, Benfica’s full-backs inverted, much like the Bayern Munich full-backs during Pep Guardiola’s tenure at the club. Tiago Araújo and Embaló offered width while Dantas, Ramos, and Henrique Araújo were deployed centrally, giving Benfica eight outfield players in the central channel and half-spaces. 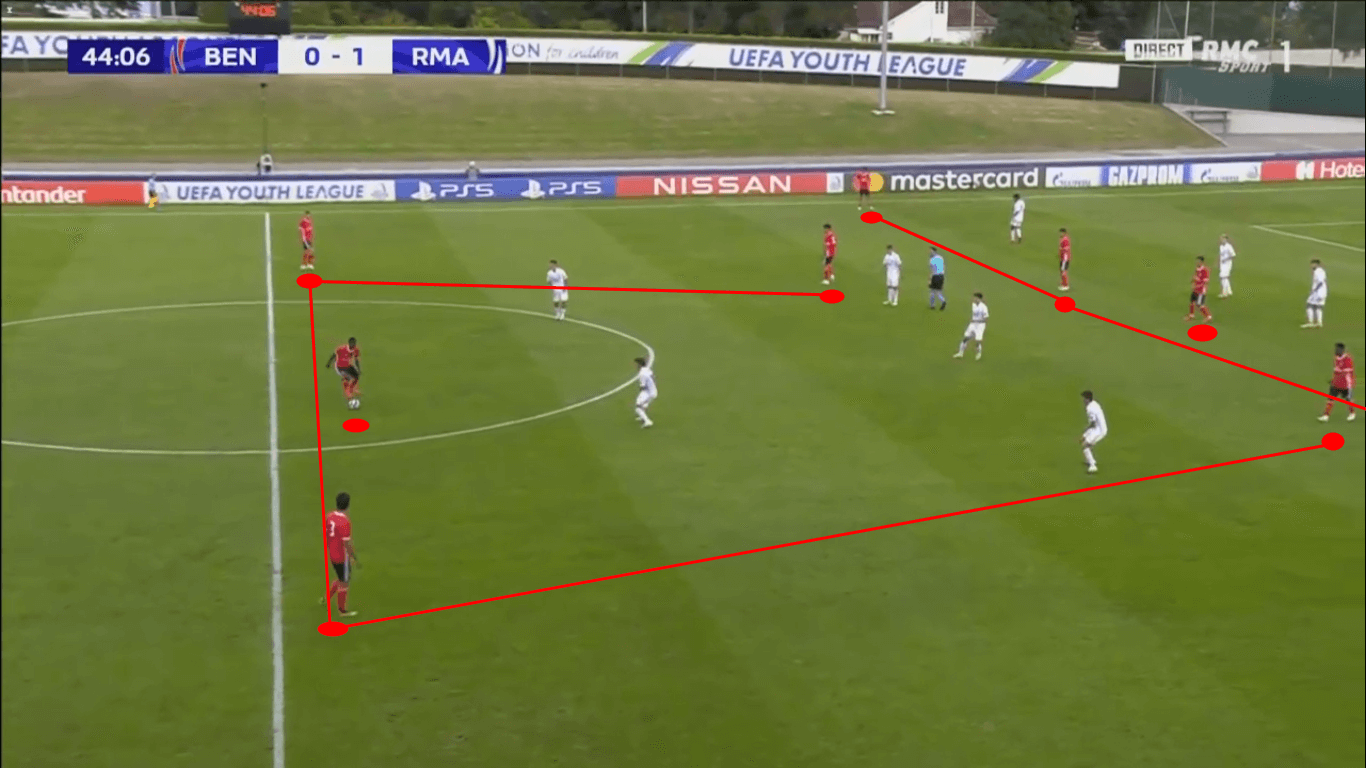 In this instance, Embaló and Dantas have switched roles. With Dantas in the wing, Embaló moved into the half-space to offer a run behind the line while staying connected to his central partners. Both wings were productive while offering different approaches in attack. While Tiago Araújo preferred to cross, Embaló was dangerous on the dribble. He attempted 12 dribbles for the game, winning seven of them. His ability to cut inside on his preferred left-foot that produced a number of high-quality opportunities.

In the image below, Ramos picked up the ball near the midfield, pinned his defender and then passed the ball to Embaló on the wing. Trusting his teammate to win the duel, Ramos made his move into the box. 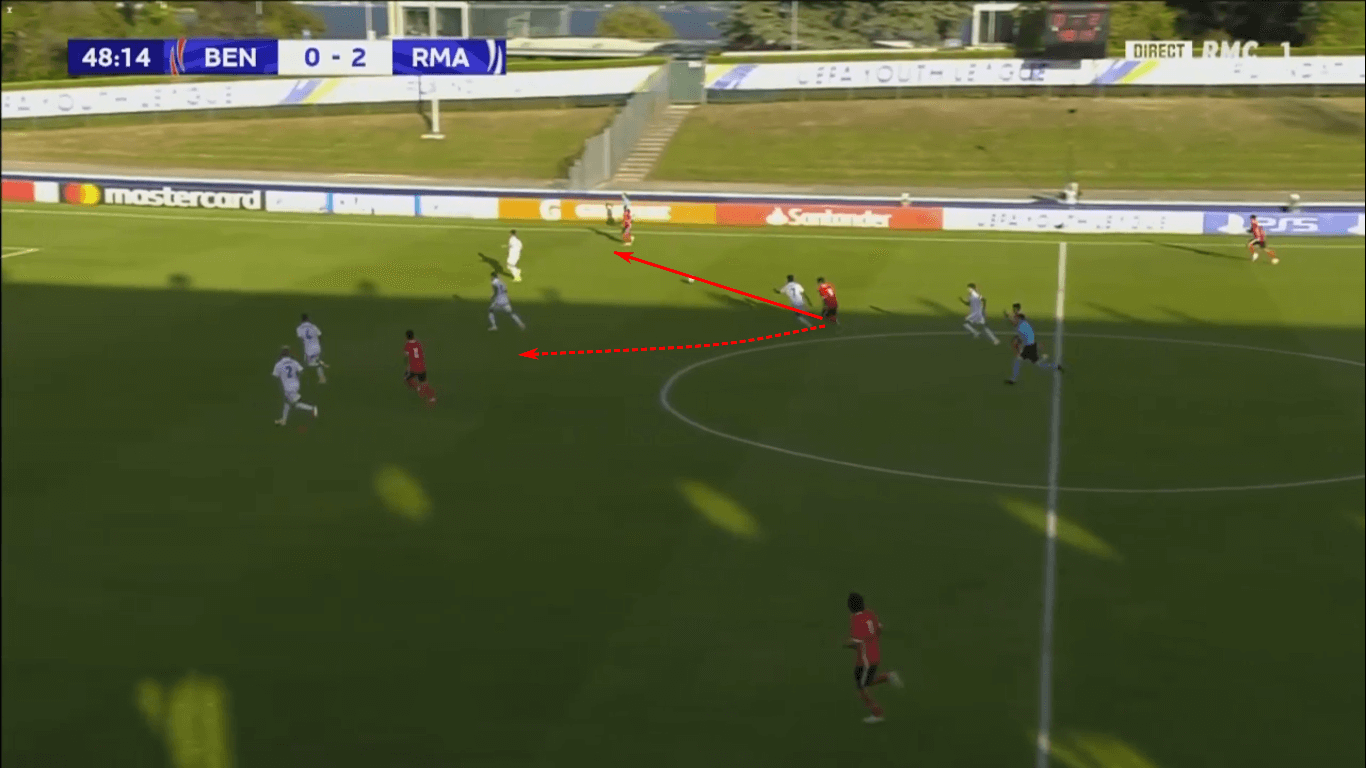 Embaló progressed into the Real Madrid box, requiring a cover defender to slide left. He split the defence, finding Ramos’ run into the box. Ramos’ initial shot was saved, as was the follow up by Henrique Araújo, but the third time was the charm as Ramos got Benfica within one. 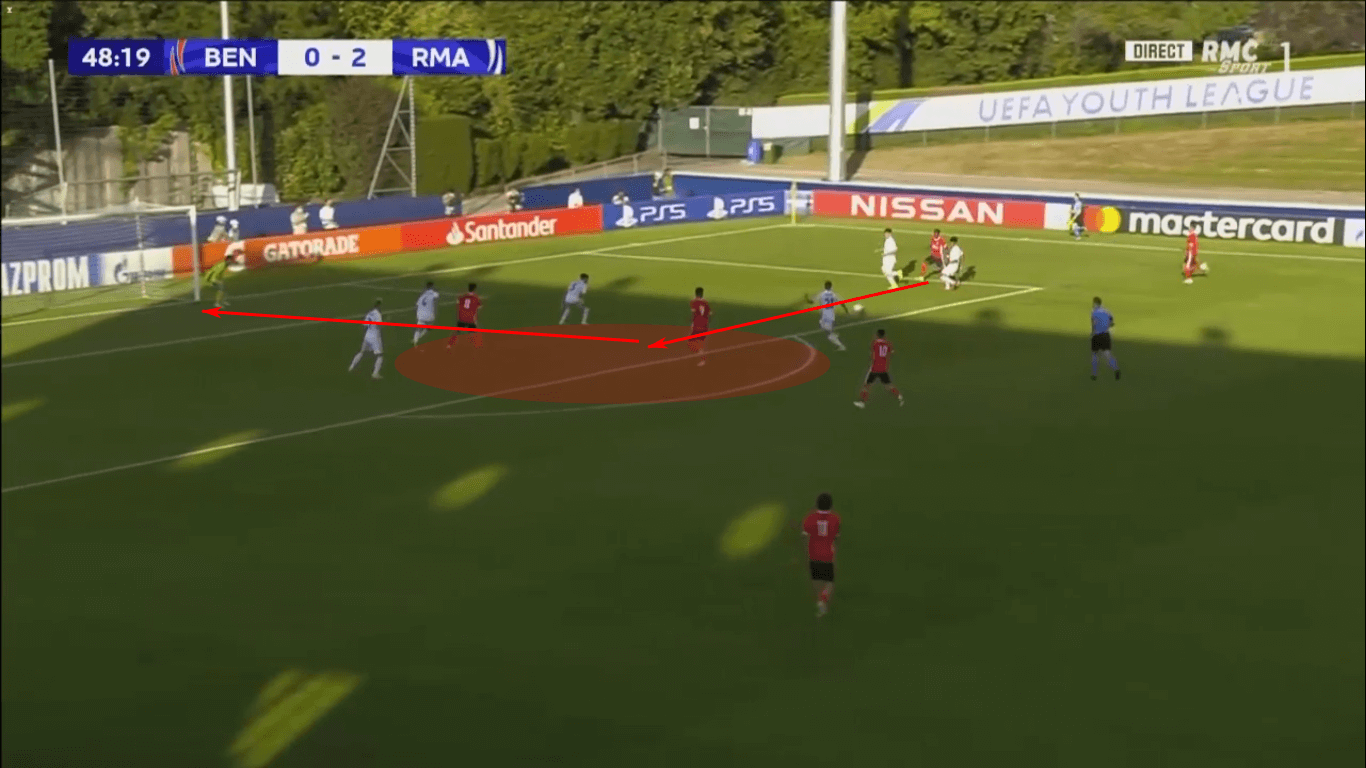 The complementary skill sets of the two wingers produced moments of magic in this match. Add in the runs of Henrique Araújo to stretch Real Madrid vertically and Ramos’ follow up runs and you can see why Benfica were so successful in this tournament, joining Red Bull Salzburg with 29 goals scored, most in the tournament.

In the end, it was the moments of brilliance from the foot of Arribas that determined the outcome. A true midfielder, Arribas had a goal and an assist while also producing the pass that led to the Jocú own goal. His three-goal contributions were responsible for Real Madrid’s best chances on goal.

Even though Madrid set out in a 4-4-2, Arribas spent most of the match offset to the right. With Marvin dropping deep to defend and Ferreira inverting for Benfica, there was ample space on the wing for Arribas to receive. With Delgado occupying Jocú and the centre-backs in the central channel, Arribas made an effective wide outlet, albeit an isolated one. Since Real’s attack was very direct in this match, looking to break lines with early and often, the right-sided overload with pockets of two or three well-connected players offered the most success going forward.

Though he, like most of the Madrid attackers, didn’t experience a great deal of success, Arribas produced the necessary quality when it was needed most. Additionally, when support did arrive, it was often from Marvin’s bursts up the pitch. Given Real Madrid’s asymmetric defensive tactics, attacking on the left was rarely an option. For the match, 18 of Real Madrid’s 26 attacks, including 91% of their xG value of the match, came from the right.

The sequence below produced Madrid’s first goal. Arribas had the assist on the first goal from a cross. Receiving on the right wing, a simple through ball sent Marvin behind the line. He was caught, but not until reaching the Benfica box, having his cross blocked for a throw-in. 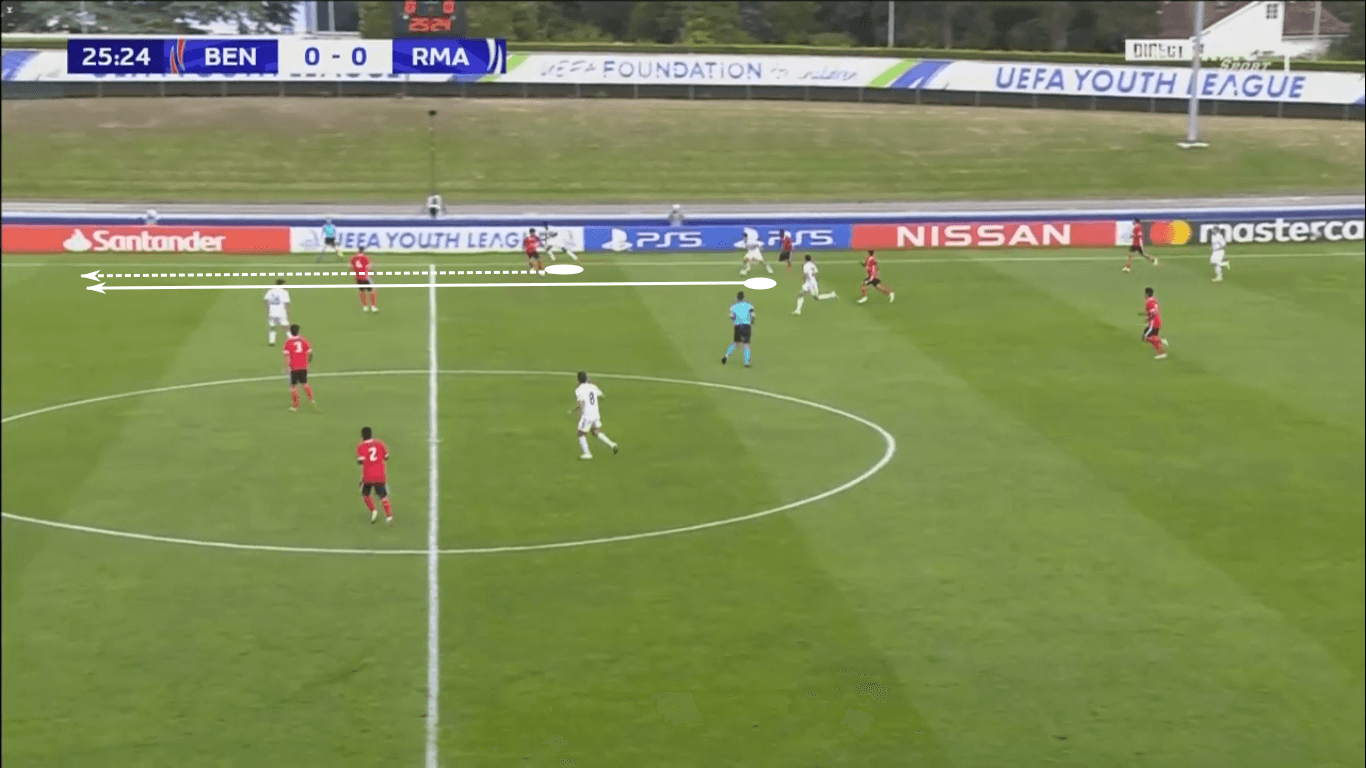 He took the throw quickly as Arribas intelligently identified the available space and demanded the ball. An accurate cross to the near post met the head of Delgado, giving Madrid a first lead they wouldn’t relinquish. 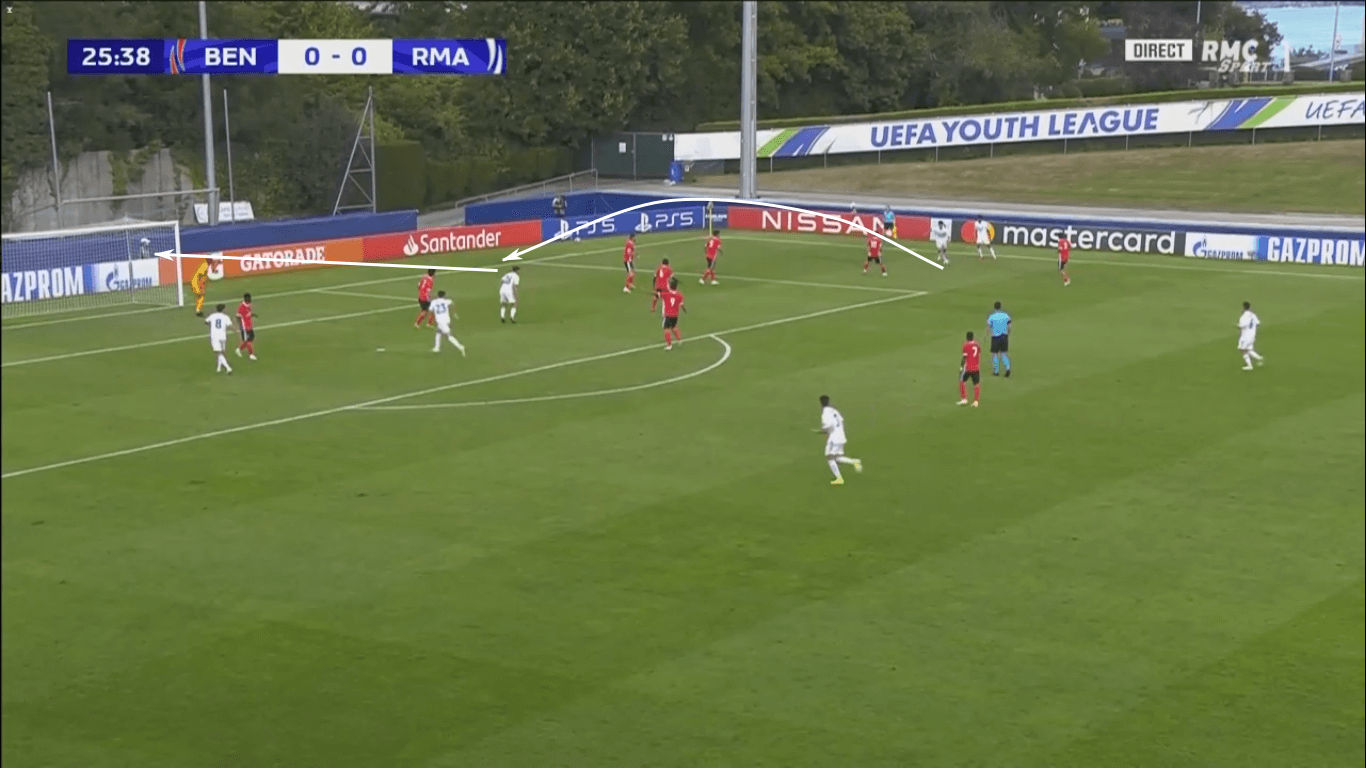 That was neither the first nor the last time Arribas would cause trouble. Earlier in the match, he showcased his versatility, beating a defender on the dribble, pinning a second defender and playing a give-and-go off of Delgado, who then turned inside and ran to goal. 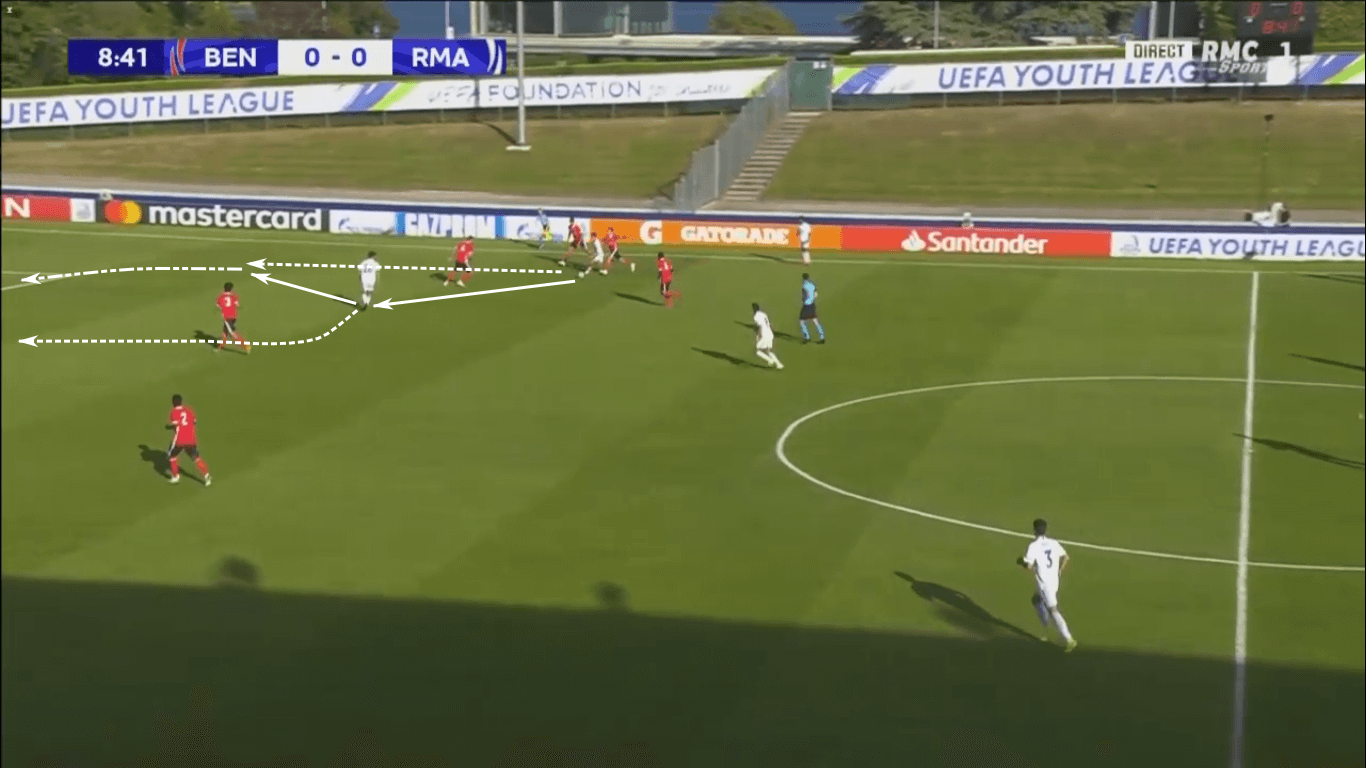 With Arribas drawing Tomás Araújo away from the middle, he was able to set up Delgado with an early chance at goal, but he was slow to release the shot, seeing this one blocked for a corner kick. 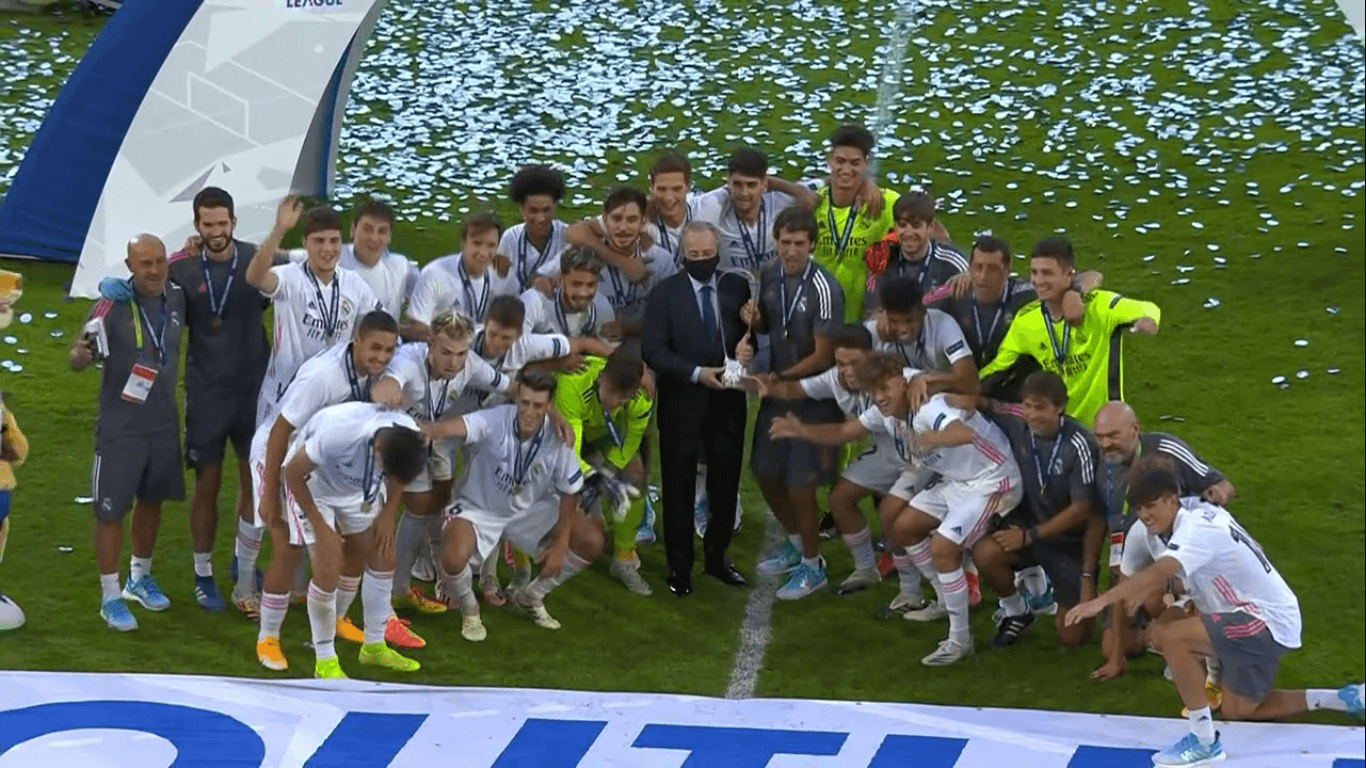 Much like their La Liga-winning first team, the Real Madrid U19s were able to celebrate a trophy-winning campaign with club president, Florentino Pérez. Despite Benfica’s incredible attacking display, an early lead, which extended to a two-goal margin just before the break, left Real Madrid in control of the match. With little to gain venturing forward, Raúl’s side maintained a defence-first approach that allowed them to close out the match.

For Benfica, it’s a tough blow for this wildly talented side. They showed incredible class throughout the match, but the lack of finishes, including the missed penalty kick and Henrique Araújo’s late shot against the crossbar, were their undoing. Even though they walk away without the title, a number of these players are set to shine in top divisions very soon.