Manchester United has undergone a revival under Ole Gunnar Solskjaer’s short tenure. Players like Paul Pogba, Nemanja Matic, Victor Lindelöf and Anthony Martial have already shown huge improvement in their form since the Norwegian took over from Jose Mourinho. One player who really seemed to be a bad fit personality-wise with the Portuguese is Luke Shaw. The English left-back has been superb since Solskjaer took charge. This tactical analysis will look at his new role in Solskjaer’s United.

Shaw never really had a long and consistent role in the team under former Real Madrid boss Mourinho who often publicly criticized the left-back’s mentality. Despite this, Shaw had made 12 Premier League starts this season under Mourinho. With Solskjaer coming in, Shaw has been given a hugely different role to the defence-first mentality of Mourinho.

Shaw’s previous responsibility was to stay close to the central defenders and not get caught high up the field. Under Solskjaer, he is vital to United’s attacking play with excellent passing and intelligent movement.

It’s already been clear that Solskjaer has certain ideas about how he wants his United to play. These mainly mirror what I profiled from his Molde tactics. It’s about rotation, fluidity and combination play. The full-backs play a vital role. Solskjaer talked after the Cardiff win about how he wanted his full-backs to play.

“We had a little session yesterday on the patterns of play and we wanted Ashley [Young] going forward and Luke [Shaw] to support Anthony [Martial], because he’s great one-against-one, and Ash on the right-hand side too. It worked great today.”

These roles were similar in the following two matches. Against Bournemouth, for example, United’s attacking shape often looked as imaged below. Young pushed high and wide with Lingard moving inside on the right while Martial stayed wide on the left with Shaw tucking inside. 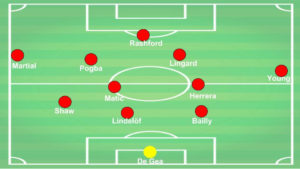 This created a very fluid shape with lots of possible passing triangles. One of these triangles, between Martial, Pogba and Shaw, has already proved key to United’s attacking football.

Luke Shaw’s changed role in possession can be seen with everyone’s set of eyes, but it’s also proven statistically. In the last four matches he played under Mourinho, Shaw averaged 45 passes. In Solskjaer’s first four, he averaged 81 passes as United looked to dominate possession through quick and slick short-passing combinations.

Below we can see a triangle being established on United’s left wing. The connection and combination play between Shaw, Martial and  Pogba has been key in United’s exciting style of play. The trio often exchange quick passes between each other to draw in the opposition to then attack another space and exploit a weakness there. Shaw positions himself at the base of the triangle with a good passing angle diagonally to the two Frenchmen. With Martial wide this forces Shaw to move a bit more centrally. 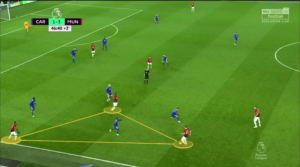 Below we see the situation a few passes later. The two Cardiff players (yellow) have moved tight to Martial and Pogba which opens up a huge space behind for Lingard to run into. As he does he drags his opponent with him, opening up the centre for either a pass to Rashford (white) or for Pogba to receive, turn and dribble into.

Rashford’s positioning between the two centre-backs stops the near-side centre-back from covering the space behind the right-back. This type of movement and positioning destabilises opponents. Shaw’s short-passing ability keeps the ball moving in tight spaces and is key for United to implement this type of attacking play. 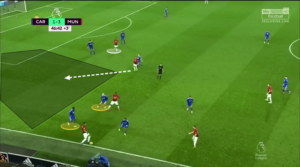 Below we see another occasion of the trio of Shaw, Martial and Pogba linking up. It’s also an example of how United’s fluid play can drag man-orientated opponents out of position. Again we see Martial (white) wide, Shaw (yellow) slightly tucked in and Pogba (purple) in the left-sided half-space.

Shaw has just received possession and Pogba is making a run diagonally to the left. His run drags the marking midfielder away from the centre. Shaw dribbles inside into the empty space in the centre and finds Lingard (next to the referee) in a great position. He continues his run to eventually threaten with a deep run through the middle. 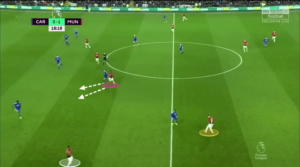 If we look at the stats to see how United have attacked under Solskjaer we can notice a clear emphasis on building play on the left. The below graphic from the 4-1 win against Bournemouth is crystal clear. There’s a huge difference with the amount of passes on the left compared to the right.

The same conclusion can be found from the Huddersfield win at Old Trafford. Again, the difference is remarkable with so many more orange dots on the left compared to the right and even the center.

Finally, the signs were already there in the first game under Solskjaer at Cardiff. The below graphic shows United’s passes from right to left. The graphic is once again clear; United have loads more passes on the left compared to the right.

We can therefore draw the conclusion that the likes of Shaw, Matic, Pogba and Martial have a clear role in United’s attacking play. Solskjaer wants them to build attacks on the left to attract the opposition to that side before being able to switch the play to the opposite flank quickly.

That destabilises the opposition’s defensive shape and has already seen United score goals from it. Pogba’s two strikes against Bournemouth quickly spring to mind where crosses came in from the right wing. With Shaw’s impressive short passing in tight areas the left-back is vital for this type of possession.

Shaw’s technical ability has impressed thus far but his intelligence has been equally impressive. He adapts his position based on the positions picked up by the players around him. This highlights an important part of Solskjaer’s positional play. With Martial often playing wide, Shaw reacts by staying more centrally as we’ve seen above.

As we can see in the below image, however, Shaw (yellow) also moves high and wide at times. Martial and Pogba (both white) are in central positions and Shaw has therefore moved forward in a wide position to stretch Cardiff horizontally. 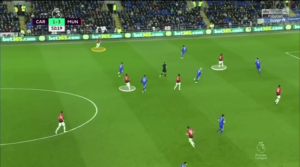 We have another example below from the home game against Huddersfield. United played with Lingard and Mata as wingers in this game with both players usually playing through the centre rather than Martial’s wider positioning. Shaw’s role therefore changed. Shaw (white) has moved high and wide with Pogba and Lingard (both yellow) in central positions. 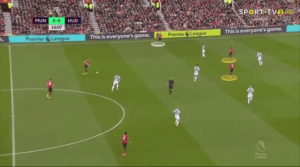 Against Bournemouth, with Martial back on the left wing, Shaw played a lot more centrally though. Below we see him positioning himself in the left-sided half-space to receive a pass from Matic. This highlights both clever coaching from Solskjaer but also very good understanding of space from Shaw to pick up a very good position which is difficult to defend. 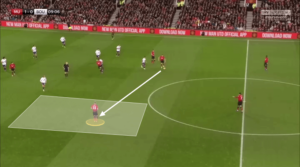 Below we see Martial (white) on the ball out wide. Shaw (yellow) has again moved centrally to become an option. His positioning there creates an easy way of potentially finding Pogba in a 1v1 against a defender with a simple third-man combination. 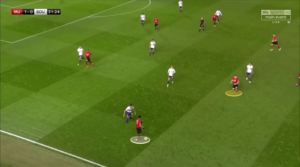 In the final image below, Shaw reacts to the movement of his teammates. First he provides support for Martial at the base of the triangle with Pogba. As Martial moves inside and plays the ball to Lingard, Shaw moves forward to provide a wide threat based on Martial’s inverted movement. Once again, it is example of very good understanding from the 23-year-old. 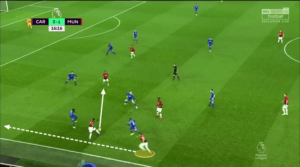 Shaw’s intelligence has been clear to see under Solskjaer so far and it will be intriguing to see how this will develop during the second half of the season.

Luke Shaw had his troubles under Jose Mourinho but his future at United looks a lot brighter under Solskjaer. He’s already become a key player in the very attacking approach deployed by the Norwegian. It will be exciting to see how the left-back continues to develop under Solskjaer as Shaw can now truly establish himself as a United regular.