Dropped for the World Cup, with Gareth Southgate preferring his club teammate Ashley Young. With only a year left of his contract, it looked like Luke Shaw’s career was over. However, a Man of the Match performance and his first senior goal against Leicester has given him hope.

Even though Ashley Young has an impressive season, it’s time for Luke Shaw to fulfill his potential. What can he add to Jose Mourinho’s team?

Jose Mourinho hailed Luke Shaw’s performance as ‘the complete performance’ against Leicester. Can he use this as a springboard, so that Jose Mourinho can no longer ignore him?

As a natural left-sided player, Luke Shaw gives Manchester United width in the attacking third. He is given licence to push forward and rather than an Ashley Young who would cut back inside, he can attack on the outside of the opposition full back.

This is evident in Luke Shaw’s first professional goal and Manchester United’s second of the evening. 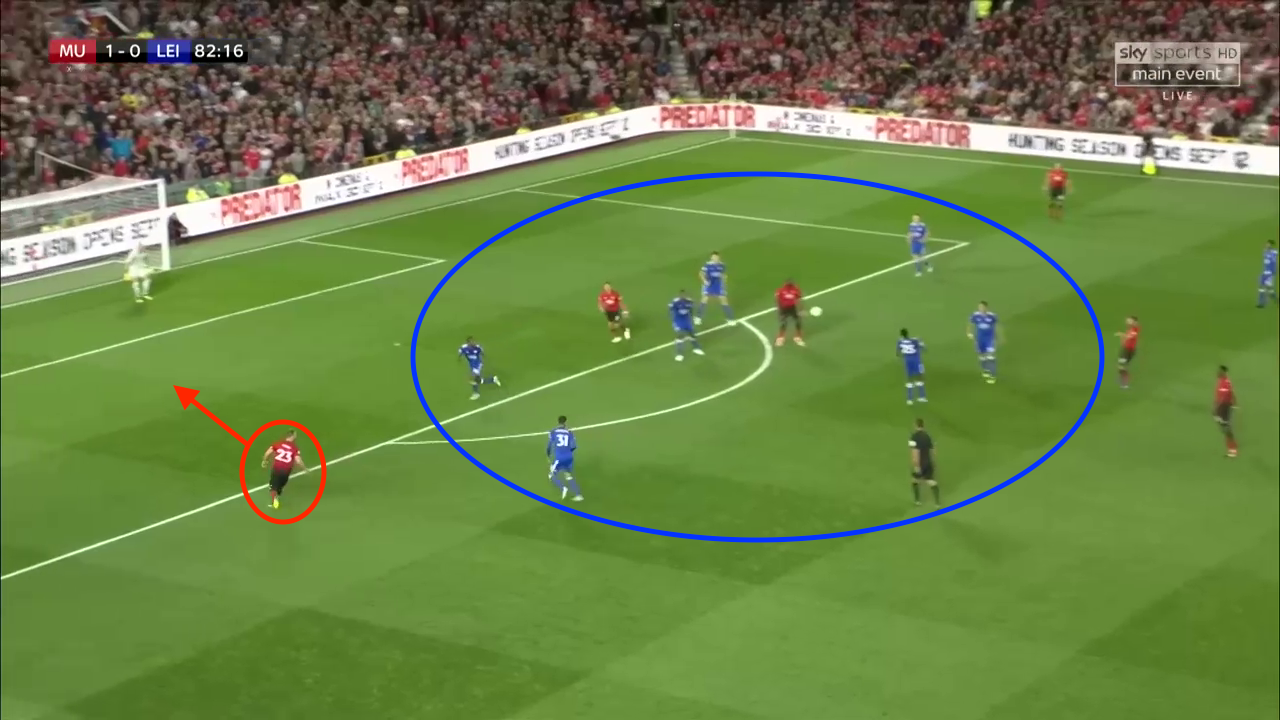 Luke Shaw’s forward run has stretched Leicester City’s narrow defensive unit. As the ball is played across the midfield into Luke Shaw’s path, he is able to take it first time on his left side. He then lifts it over the oncoming defender before slotting home. His attacking run has also taken 7 Leicester City players out of the game, who were focused on the central defensive block.

The most important thing is that a right-footed left-back would have cut back inside to shoot. Luke Shaw offers another attacking option to Manchester United and can open the play up in the attacking third.

This will be important against the teams lower down in the division. Manchester United struggled to break down defensive teams last season. The ability to stretch their low defensive blocks on the left flank as well as the right will be key to Jose Mourinho unlocking the team’s potential. This attacking option will also provide further options for Paul Pogba as Manchester United look to unlock his potential.

If Manchester United are to improve on their league position this season, they need to press higher up the pitch. Jose Mourinho can no longer win the title nullifying oppositions strengths. Manchester City and Liverpool’s high press has been successful domestically and in Europe and it’s time Jose Mourinho adapted his tactics.

Luke Shaw showed evidence of his ability to press higher than his defensive line against Leicester City. This enables Jose Mourinho to stop attacks further away from the Manchester United goal and also transition quickly into attack. 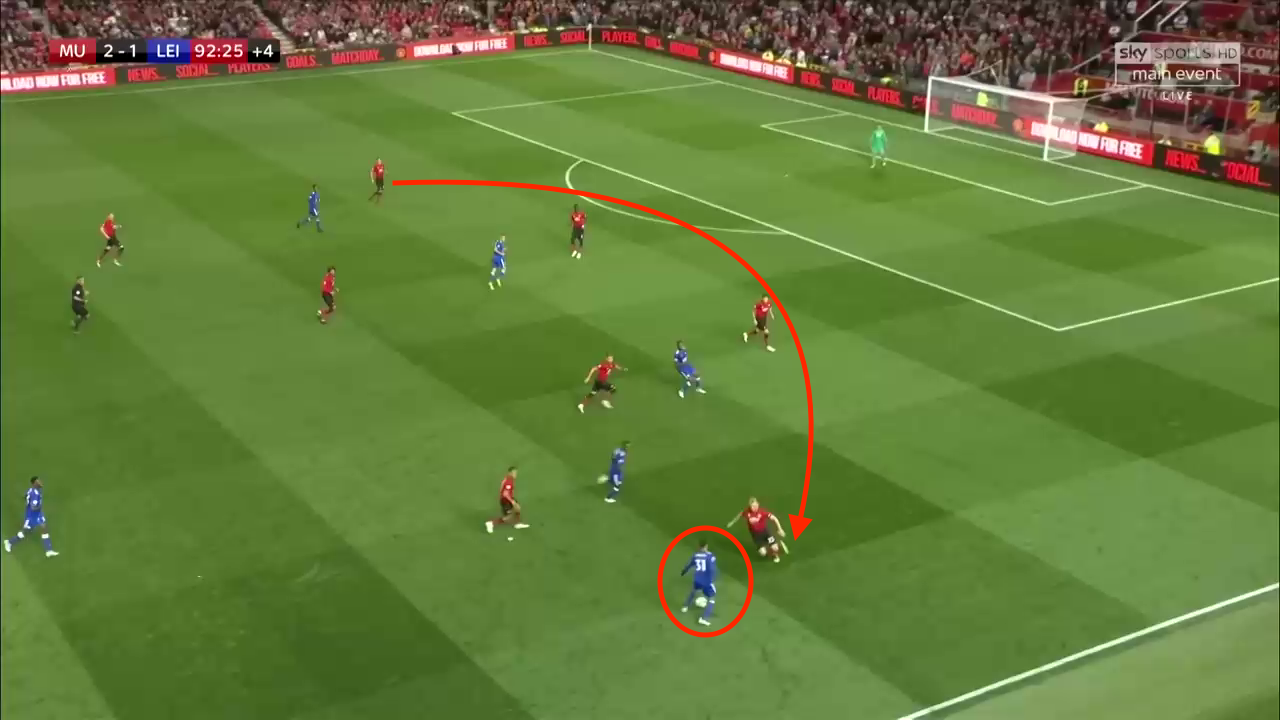 Even in the final minutes against Leicester City, Luke Shaw is still showing the fitness levels to step up out of the defensive line. In this move, he wins the ball from the opposition right-wing but he is more in line with his midfield than fellow defenders. This is where he can add real value. His ability to pressure quickly can help Manchester United transition from defence to attack. It will also help them play further up the pitch, which can help them unlock chances against lower level opposition.

Earlier in the article, we picked up the importance of Luke Shaw’s positioning. As Luke Shaw is a natural left-sided player, it helps Manchester United maintain their width and stretch the opposition. This can be seen in his pass map, below, from the match against Leicester City. 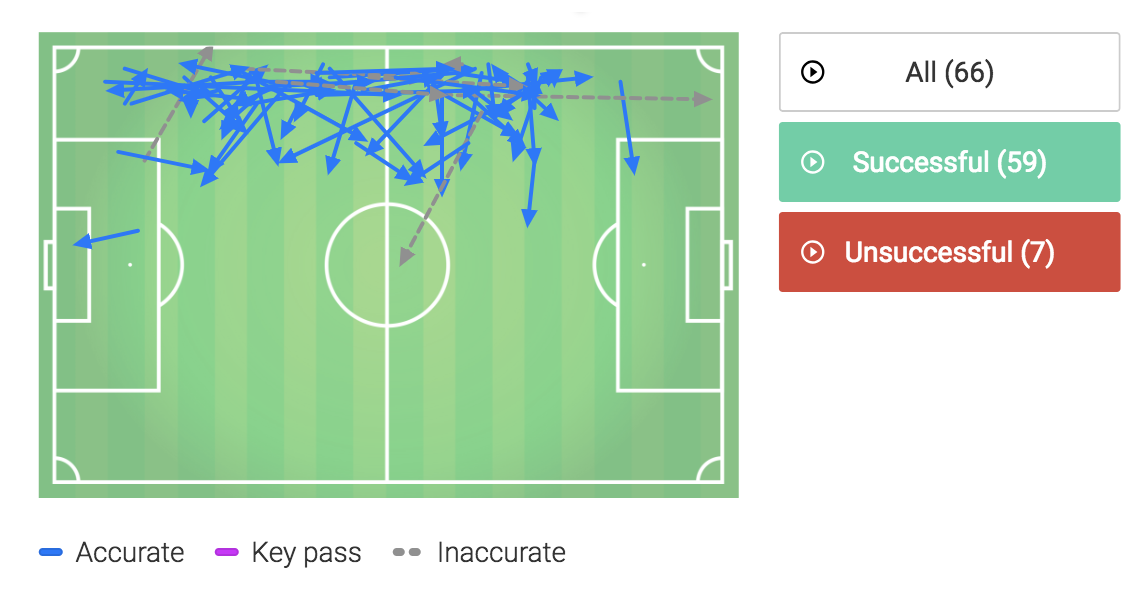 The graphic above shows he had an 89% passing accuracy, which helped Manchester United control the game. Furthermore, the majority of his passes were wide left. This provides Manchester United with another option going forward. He can maintain the width and stretch the opposition, choosing to come inside when it benefits the team rather than being the natural default of a right-footed left-back.

How can Jose Mourinho continue to ignore Luke Shaw?

Throughout last season, Manchester United struggled to break down the opposition and their defensive approach ultimately resulted in them losing the title to Manchester City. Although Ashley Young had a great season, part of the reason for this was the lack of a natural left-sided player. Jose Mourinho preferred to play an inside forward on the left-hand side of midfield last season. In the latter stages of the season, this role was undertaken by Alexis Sanchez, who regularly cut inside looking for attempts at goal.

This left Manchester United with a lack of width on the left side of the field. The solution to this problem is to play Luke Shaw. He will maintain the width in midfield and can overlap Alexis Sanchez to provide further options. We have already seen his attacking capabilities in the first game of the season. Jose Mourinho described his performance as ‘very complete’ and should continue to use Luke Shaw to provide a new attacking option for Manchester United. We questioned how Manchester United can evolve this season, Luke Shaw has already provided Jose Mourinho with another option.