The 220th Madrid derby saw Real Madrid and Atletico Madrid face off in the UEFA Supercup (the winners of the Champions League and the Europa League). With Real Madrid selling Ronaldo and no big name in to replace him, and Atletico spending heavily over the summer, it was set to be an intriguing derby of which Real Madrid have won 109 times, Atletico Madrid winning 55 with 55 draws (before the result of the Supercup). 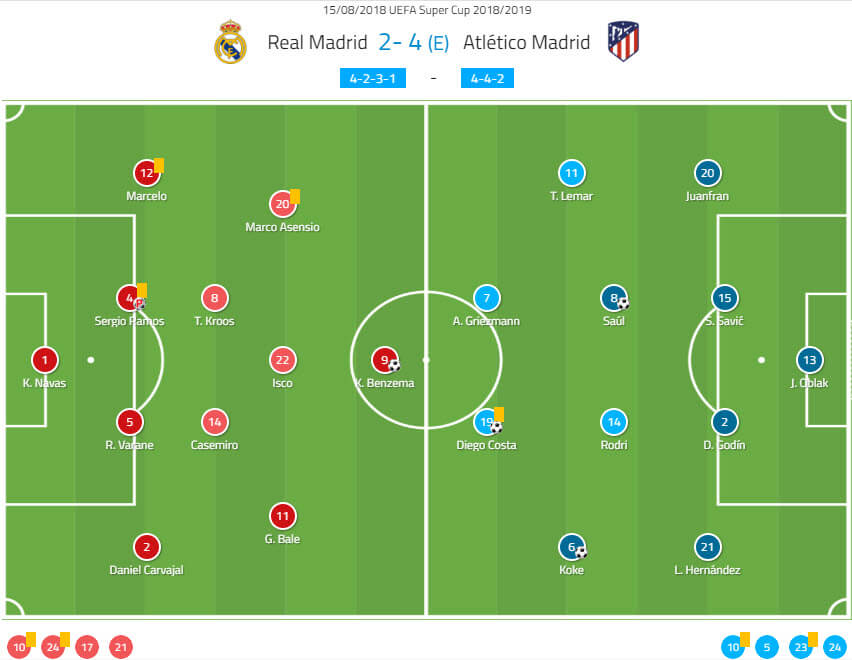 Real Madrid, in their first competitive game under new manager Julen Lopetegui, lined up in a 4-2-3-1 formation. Too soon for Courtois to make his debut, Keylor Navas donned the gloves in goal, with a familiar lineup of Marcelo, Ramos, Varane and Carvajal in front of him. Kroos and Casemiro started in front of the defence, with Asensio, Isco and Bale making up the rest of the midfield with Benzema donning the mantle left by Ronaldo in attack.

Atletico Madrid lined up in their familiar 4-4-2 – with the tried and tested backline of Hernandez, Godin, Savic and Juanfran. The midfield saw new signings Rodrigo and Thomas Lemar start alongside Saul and Koke with Costa and Griezmann leading the line up front. It was too soon for new signings Gelson Martins, Nikola Kalinic and Santiago Arias (who I’m a big fan of) but they all made the bench.

Real Struggle To Break Atletico Down

Atletico Madrid opened the scoring with a ferocious effort by Diego Costa after just 55 seconds, and as most people know, it’s incredibly hard to break down Atletico Madrid at the best of time – let alone when they’re leading. Yet even with the creative genius of Isco and Asensio with the flair of Bale – Real Madrid struggled. 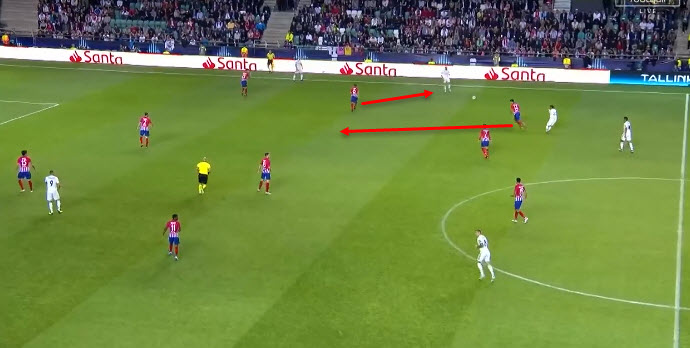 As is normal with Atletico, they defended with 2 banks of players spaced closely together – in the above picture, we see Rodri dropping back into central midfield after Real Madrid move the ball (avoiding his press) which in turn allows Koke to press without any real sacrifice in shape.

This one man pressing style was highly effective when combined with Atletico’s organisation in defence, with players seamlessly switching between pressing and keeping their position. The below picture shows the possible options available to Atletico players depending on where the Real player plays the pass.

One aspect in particular of Atletico’s defensive style that really impressed me was their midfield shape, in the fact that it was staggered when Real had the ball in a wide position as seen in the below pictures 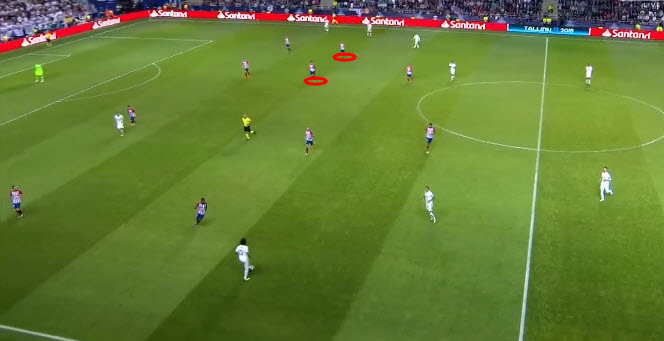 By having two midfielders on the opposite side of the pitch slightly deeper, it means a quick switch of play (either via a long-ball or a few quick passes) from one side to the other is less likely to cause a breakdown in defensive shape.

Ronaldo averaged 50 goals a season during his time at Real Madrid and with no replacements signed to make an immediate impact, it’s down on the players already at the club to try to make up that deficit. With Asensio, Isco, Bale and Benzema, it’s obvious that Real Madrid are stacked with attacking options, however, it’s also clear that Real Madrid suffered without him.

In last season’s La Liga, Real Madrid averaged 18.4 shots per game – the highest in the league, with Ronaldo the player that took the most shots, with 6.6 shots taken per game. When we look at the last time these teams played each other (a 1-1 draw in April 2018) we can see that Real Madrid took an incredible 30 shots with Ronaldo taking 4 of those.

This year’s Supercup game, however, saw a dramatic shift, with Real Madrid taking less than half of the number of shots as the last game with just 14 (with Marcelo and 2nd half substitute Modric responsible for 6 of those). Between Bale, Benzema and Asensio, Real managed just 5 shots. Of course, this is just a small sample, and could also be affected by players playing under Lopetegui’s system (rather than Zidane’s), but the warning signs are there, and I think Real Madrid will certainly carry on struggling to replace Ronaldo’s goal contribution.

Simeone (despite still serving a touchline ban) decided to give his two most expensive summer signings – Thomas Lemar and Rodrigo a baptism of fire by starting them against Real Madrid. Both showed promise with a couple of superb dribbles at times, but at the same time, both showed plenty of room for improvement. Thomas Lemar’s work-rate was poor at times, with a few half-hearted attempts to chase back such where he jogs back when Asensio is on the ball – I’m sure if he sprinted after him – he could’ve forced either a mistake or helped to win the ball back quicker, instead Asensio managed to get the shot away – which I’m sure enraged Simeone.

Life at Real Madrid after Ronaldo is certainly going to be interesting, it’s too premature to say they’ll struggle to fill the void left by him, but this performance would certainly suggest that Real Madrid certainly won’t be able to match their goal tallies of seasons gone.