Summer of 2018 is an end of an era at Los Blancos, and also a big change for them. It started with winning the Champions League three times in a row and followed with the announcement of Zinedine Zidane. Suddenly, Zizou declared his leaving. Then the other great member of these successes, Cristiano Ronaldo left the club to join Juventus.

Between this two major news Real appointed Julien Lopetegui as the next coach. So let’s see what can Lopetegui bring to Madrid.

First of all, we have to clarify what Lopetegui’s task will be and the nature of this appointment. Due to the fact that Real have a great squad, but their key players are slowly, but surely coming to the end of their careers, therefore Lopetegui’s job’s different than the Zidane had. Even Cristiano Ronaldo getting older. His performance getting lower and lower in every season and in the last one he was able to play at the highest level only in a few matches. His biggest fans can agree that this was the second year, where the autumn half of the season was wasted.

So, Lopetegui’s task is to slowly build a new team with the young talents. Leading the generation shift.

At the first glance, Julien seems perfect for this job. He started his career at the Spanish U17 team as an assistant coach, then still in this year, was appointed to Rayo Vallecano as a head coach, but after a few matches, he had been sacked. Then he acted as a commentator for several years, but he got back to coaching with the Real Madrid Castilla. Between 2010 and 2014, he achieved two major success, firstly, winning the under 19 European Championship in 2012. Then years later, he repeated that with under-21 Spanish teams.

So, his biggest achievements happened as a national team coach, which questioned his ability to bring success as a club coach.

However, his career was not over, after that two major hits, he got back to the club segment of football as a head coach of Porto. Where he had two seasons with a mixed result. He could not win the Portuguese division, but he led his team to the quarter-finals in the UEFA Champions League.

Overall, he still cannot win anything as a club coach, but he got a clear vision of what he wants to play with his teams and he commits his teams to play in a stylish way.

The successor of Vicente del Bosque

In the recent years, he becomes well-known as a response to the new success of the La Furia Roja. After the incredible achievements: winning a World Cup and European Championship, Del Bosque failed to evolve the team beyond mere sterile possession in his final four years as coach, but Lopetegui has made some evolution in the Spanish national team.

Truth be told, he did not switch to a completely different style due to the fact that he also favouring the possession-based style, but he killed the tiki-taka and ordering a much direct style of play.

His thoughts on counter-attacks:

“There are times when it is impossible to counter and times in which it is a fantastic solution.”

Therefore, it will perfectly fit for the players like Bale or even Asensio. With quick progression or direct passes, they can use their skills and pace to counter the opponent.

This also fit for the greater passers like Kroos, Modric or Isco.

Other elements of his tactical philosophy 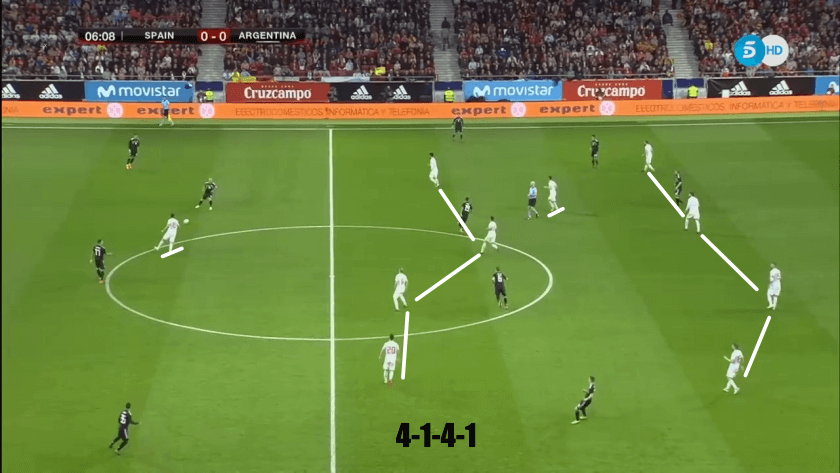 As you can see, he likes his defence as a compact shape, with a congested central area. The compactness appeared when the opponents used backwards passes because when the opponent perform these passes, the whole team moves together forward as a collective. 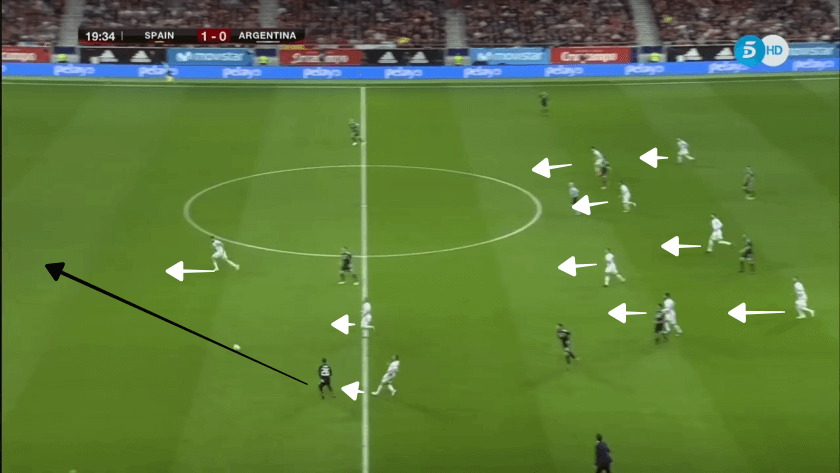 The La Furia Roja in his era was quite good at pressing and counter-pressing (gegenpressing), due to the fact that the central players in the team move a lot in order to always be available for passes. Also, they used a lot of positional switches. It can apply early in the build-up phase.

Therefore, when they lose the ball they had a few players in that area, thus they can immediately applying counter-press, as the instance shown below displays. 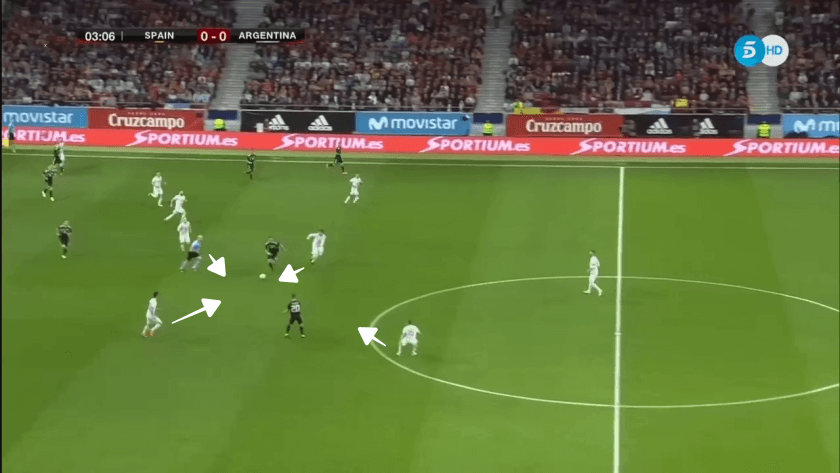 Lopetegui used a man-oriented pressing scheme at Spanish National team with a great success. They could cause some trouble for the opponents, which can mean scoring chances. 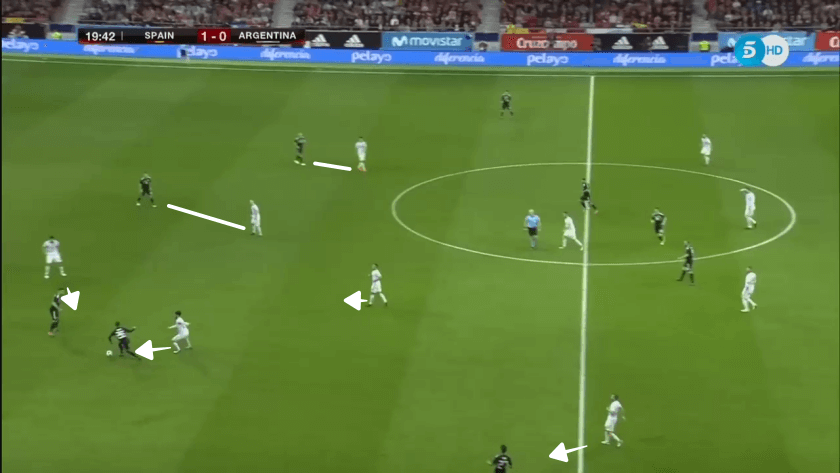 With one player pressing the ball-carrier, the others maintain close proximity to the defenders except for Costa, who positioned sideways in order to block the switch route and contains the game in that area. If it is executed well it will be really hard to bypass.

So, this style will probably appear at Real Madrid. He good at working with youngsters and getting the best out of his players, the likes of Asensio and Isco will be shinning under Julien Lopetegui. If he can establish his colourful style of play and maintain his confidence during this job, he will be successful at Los Blancos. Perhaps not as successful as Zidane was (who can?), but as a way to build a new team.