A large amount of intrigue surrounded the summer appointment of Frank Lampard as the new Derby County coach. The former England international had an exceptional playing career but had yet to test himself as a coach whilst spending time out of the game. He’s attended coach education courses, during which he had done some media work without suggesting he was preparing to move immediately into a high profile role.

With that said, he chose his first opportunity intelligently with Derby, having qualified for the playoffs last season before they were beaten at the first hurdle by the eventual winners Fulham. Their coach from last season Gary Rowett chose to accept a somewhat controversial move to relegated Stoke City and the squad is certainly strong enough to remain competitive at Championship level.

The first act as Derby coach for Lampard was to move to appoint the Chelsea U-23 coach Jody Morris as his assistant. Whilst Morris is also relatively young he has impressed with his work in the Chelsea youth system both in terms of results and individual player development and he was already well thought of by observers within the game.

During pre-season, Derby have been impressive with positive results including a win against the best team in the Championship last season, Wolves. As ever though, results in pre-season are not necessarily an indicator for regular season success and an opening league fixture against Reading and their coach Paul Clement would certainly not prove to be a comfortable baptism for Lampard as a coach. 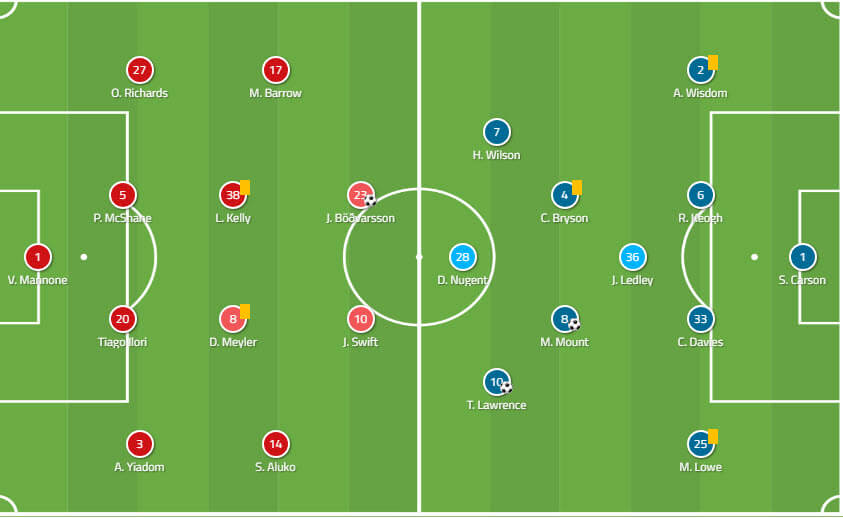 Throughout the pre-season period, Lampard has preferred a 4-3-3 system with a single striker supported by two wide players who stay high and attack in towards the penalty area from the wide area.

Lampard and Morris have made good use of their knowledge of the U-23 system with the signings on loan of Mason Mount, from Chelsea, and Harry Wilson, from Liverpool. Both youngsters were in from the start here and would be important pieces in the attacking gameplay from Derby throughout the match. They would both start the match with Mount spending the majority of his time playing as the ‘8’ on the left of the central midfielders and Wilson playing as the wide attacker on the right.

This past week has seen Derby spend significant money on signing forward Jack Marriott from Peterborough United but the young attacker spent the match in the stands as Lampard opted for the experienced David Nugent to lead the line.

The value of a pass

The match itself was relatively uninteresting. Reading were resolute defensively and looked to attack through quick transitions in the wide areas where Sone Aluko on the right and Moussa Barrow on the left used their pace to cause the Derby fullbacks problems.

Derby dominated possession in the match, ending up with 68% of the ball compared to 32% for Reading. There was, however, a huge difference from the first half to the second in how Derby used that possession. In the first half Derby were passive in possession of the ball looking to find a way to penetrate a stubborn defensive block from Reading, indeed this led to chants from the Reading fans of ‘boring boring Derby’ As the ball was continuously circulated between the Derby central defenders Richard Keogh and Curtis Davies.

There was a clear reasoning behind this ball circulation however that gives a real insight into what we can expect to see from Lampard as a coach going forward. He is keen to see his side build the attacking phase from the back to play through the thirds and dominate the ball against the opponent.

We will look at the differences between the way that Derby looked to penetrate the Reading defensive line between the first and second half but first of all, we have to understand the different mechanisms that Derby were looking to use in order to achieve that penetration. 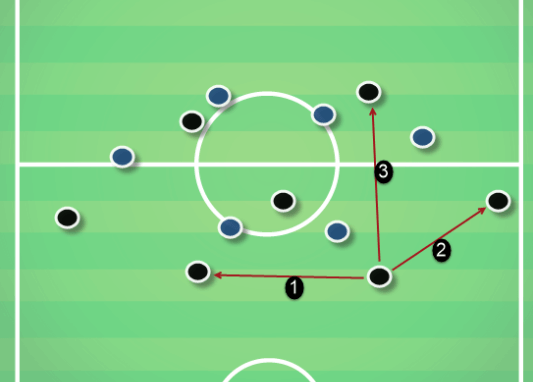 In this image, I have sketched out an example of Derby in possession against the (4)-4-2 of Reading. The ball is with Richard Keogh the right-sided central defender.

In order to find a way to penetrate the opposition defensive block, there are three different passing mechanisms that can be used.

The 1st option is to play what is known as a first line pass across to Curtis Davies, this pass is used when there is no opportunity for the player in possession to penetrate immediately. The pass across to the other central defender will cause the defensive block to shift with the intention to create an opportunity to play a penetrative pass on the other side.

The 2nd option or second line pass is designed to allow the team in possession to play around the defensive block with the pass out to the right-back who would then look to play forwards.

The 3rd option or third line pass is also the highest priority for a team playing in this manner as it is the pass that penetrates the opposition defensive structure and breaks the lines of opposition pressure. Derby in this match were intent on finding that penetrative pass although in the first half they struggled to do so.

In the first half, we saw Reading find real success as they looked to press Derby and deny them the space that they needed in order to access not only the final third of the field but also the middle third. We saw the former Chelsea starlet John Swift playing as almost a second forward and pressing with the Icelandic international Bodvarsson from the front. Behind them was a line of four players who would squeeze up and deny the Derby midfielders the space and time on the ball when they were found. 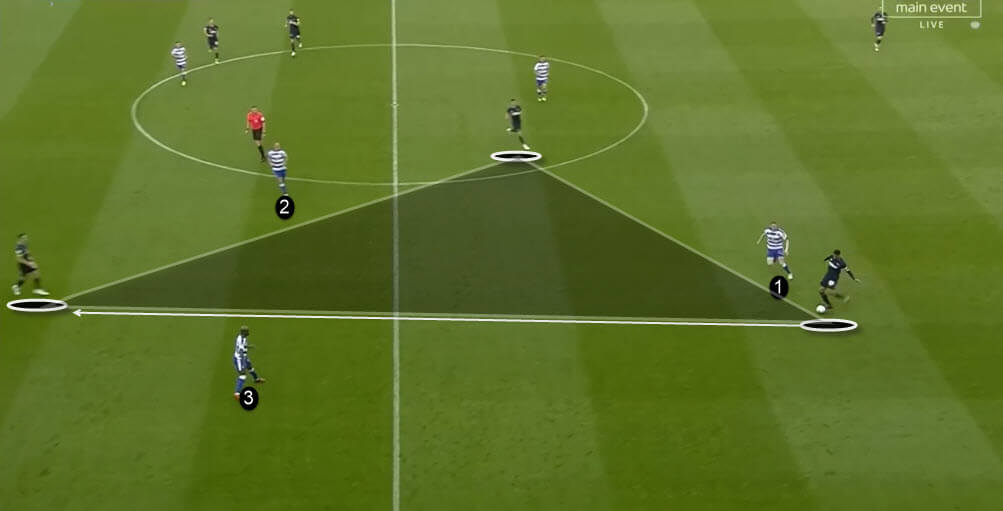 There were times in the first half that Derby were able to find the third line pass that would allow them to penetrate and move into advanced areas with the ball. Here we see that in action, as a vertical pass from Curtis Davies finds Mason Mount in a pocket of space, this pass effectively takes out three Reading players and gives Derby the opportunity to play from a more advanced area.

What we saw in the first half time and time again was the receiving player taking possession of the ball behind a line of pressure but then moving back on to the wrong side of pressure instead of using this advanced platform to then build from and move to the next level to attack the final third. 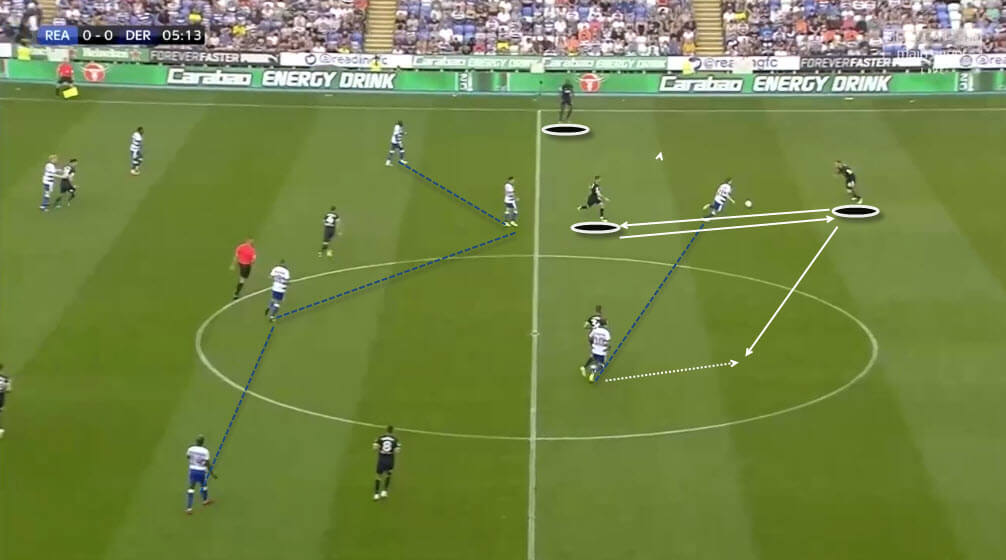 This time we see an example of the difficulties that Derby had in progressing the ball forwards from their defenders against the Reading press.

Richard Keogh has possession in the right-sided central defensive slot and he is looking to progress the ball forwards as Bodvarsson looks to apply pressure to the ball. He plays a simple 5-yard pass forwards to a player who is marked closely, the ball is then passed straight back to Keogh with no angle to escape the pressing player and when Keogh takes possession back he finds Bodvarsson pressing with more intent and in close proximity. With this pressure intensifying Keogh tries to play a first line pass to Curtis Davies blind and he instead plays the pass straight to John Swift who looks to lead a quick counter-attack in transition.

In the second half of the match, Derby quickly found themselves a goal behind with Bodvarsson scoring a header from a fantastic Moussa Barrow cross. The combination of this change in match status and the team talk and adjustments made at halftime by Lampard led to Derby playing with a much higher tempo that allowed their attempts to play through the thirds to be much more effective as the match went on. 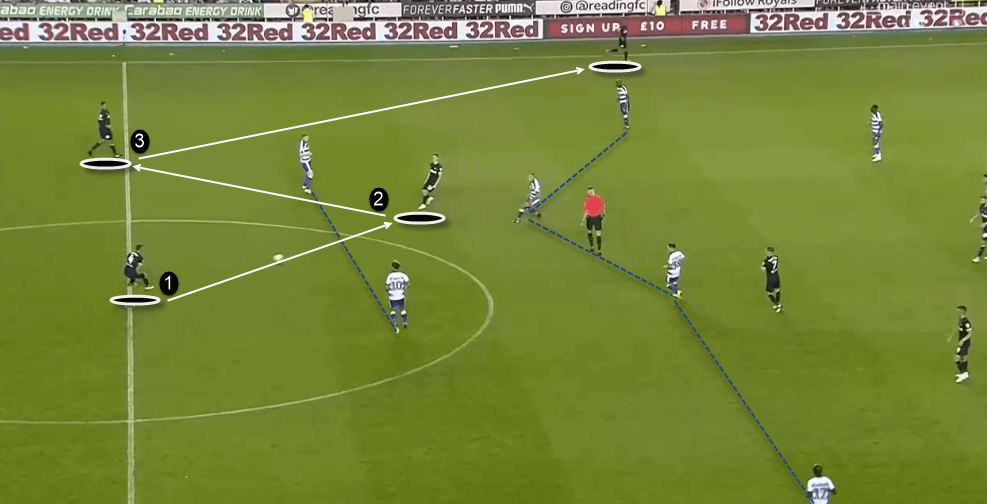 Here we see Keogh, Davies and Mount combining just inside the opposition half in order to create an opportunity for the ball to be played around the Reading block with a second line pass.

In the first half, we saw how dangerous it can be for a central defender to play a straight first line pass across to his defensive partner against a team that is pressing aggressively. That straight pass can lead to the pressing player closing the gap and forcing a mistake from the man that receives the pass. Here the ball is first played into Mason Mount who has dropped back to take the ball and who then moves it quickly out to Curtis Davies, the first pass going forwards prevents the Reading attacker from moving forward to press Davies and allows the defender more time on the ball to find his pass.

That pass comes with a ball out wide to play around the Reading block. The key however in this passing movement lay in the speed that Derby played their passes as they moved the ball quicker in an effort to prevent Reading from pressing as effectively as they had been in the first half. 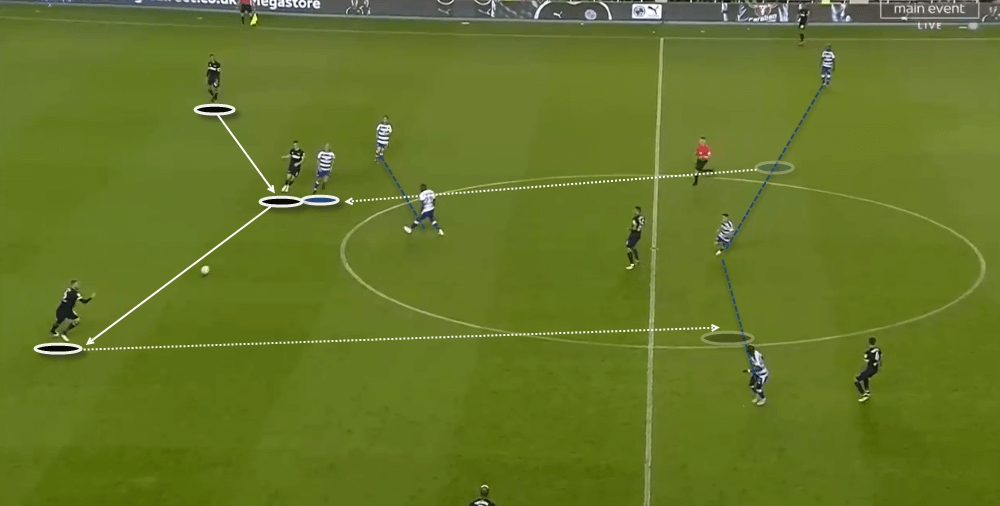 As well as moving the ball more quickly in terms of passing movements in and around the Reading defensive block we also saw Derby look to provoke the Reading defenders to move out of position by making runs both with and without the ball.

Here we see the mechanism used by Derby to move the ball from Curtis Davies on the left to Richard Keogh on the right and once again this is facilitated by bouncing the ball off of one of the central midfielders who has dropped back to support the build-up phase. As that midfielder does move back he pulls an opposition midfielder with him.

The pass forward and then out to Keogh prevents Reading from pressing the defender and he has space ahead of him that can be exploited and he drives forward. This run immediately takes three Reading defenders out of the game and as Keogh reaches the line of opposition pressure he is able to identify and find a pass into the final third that takes the midfield line out of the game. From that short piece of play, Derby have found a way to penetrate and take six Reading players out of the game.

In the end, the match was decided by a superb header from Welsh international winger Tom Lawrence with a matter of seconds left in injury time. Reading will feel that they had done more than enough to get at least a point, if not three, from the match.

Indeed the xG from the match came in at 0.84 to 0.81 in favour of Reading, indicative in the fact that the Derby equaliser came from a speculative strike from Mason Mount that should have been saved by Vito Mannone in the Reading goal.

This match, however, does give us an insight into what we can expect from Derby this season under Frank Lampard.

We should also remember that successful teams find a way to win when they haven’t played well.