Over the last decade, Germany´s main issue was the lack of world-class strikers. With Miroslav Klose, Germany had one player who performed at every World Cup. However, only a few people considered him a world-class player because he rarely performed on the club level. Since Klose retired, Mario Gomez was the only real striker left. With Timo Werner, Germany has a new promising talent. The young striker from Stuttgart performs constantly for RB Leipzig but he struggles when he faces deeper defensive blocks like at the World Cup. But there is light at the end of the tunnel. With Jann-Fiete Arp Germany and the Hamburger SV have a new promising striker who combines the abilities of a real striker and one who connects with the midfield.

Last season Arp gave his debut for Hamburg under Markus Gisdol. In his first four appearances, he scored two goals and everyone in Hamburg believed that Arp could develop in the next Uwe Seeler. The rest of the season went not that well. But, it was hard for a player like Arp to be effective regarding the bad structured system of Hamburger SV. With the appointment of Christian Titz, a lot changed. Not only does Titz know Arp from the different youth levels he also installed a possession-oriented playing style at Hamburger SV which could help Arp in the future. In the end, HSV got relegated but the last games looked promising.

Clearly, if Arp can prove that he is the player everyone sees in him than he won´t stay at Hamburger SV for long. During that transfer window, there were multiple reports that Bayern Munich wants to sign Arp and loan him immediately back to Hamburg. In the end, Arp signed a new contract until 2020. Clearly, it is possible that he will leave next summer. But the relationship with Christian Titz and the possibility to play a big role in the favourite for getting promoted to Bundesliga held him at Hamburger SV.

Why is Jann-Fiete Arp so special? And which aspects should he improve?

Compared to other strikers who play in the centre Arp has a high football IQ. He moves quite intelligently and likes to connect with the midfield in order to be involved in the combination game.

In his first appearances for Hamburg Arp struggled to be effective in the combination play. Mainly because of the bad structure, the direct playing style of the first team and his colleagues who didn´t have the strengths in quick combinations. Of course, you can still observe silly decisions of Arp which come from his inexperience. That will change with more experience. But all in all, he moves very intelligently considering his age.

In those games, he often acted with the back to the goal. So, he moved in the last line on the bridge to offside. Then he would quickly drop a few meters in order to receive a vertical pass and lay it off to a teammate. His feeling for dynamic and movement of his opponents makes him so good at that young age. 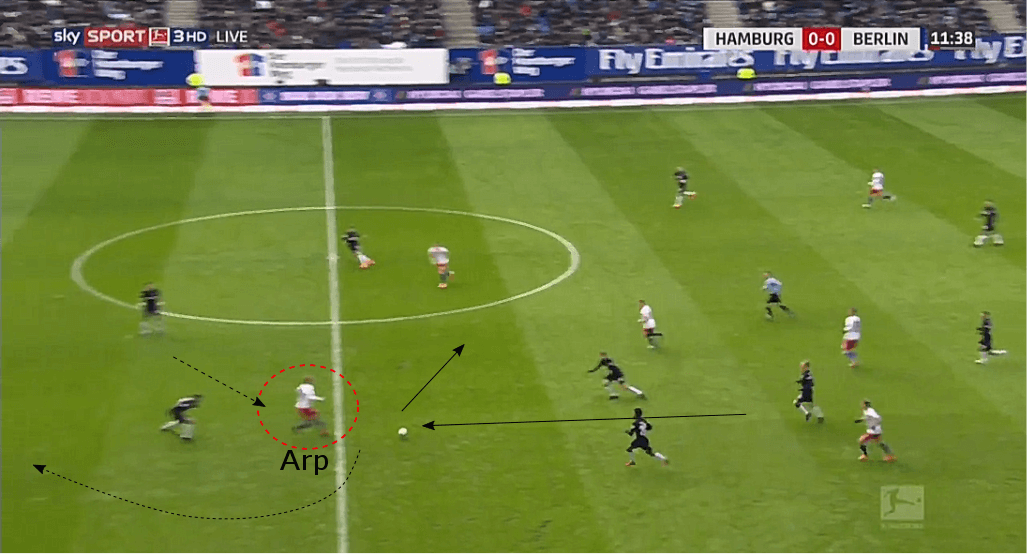 He often moves deeper just to quickly change direction. Then he has space and can receive the ball between the lines and is able to turn with the ball. 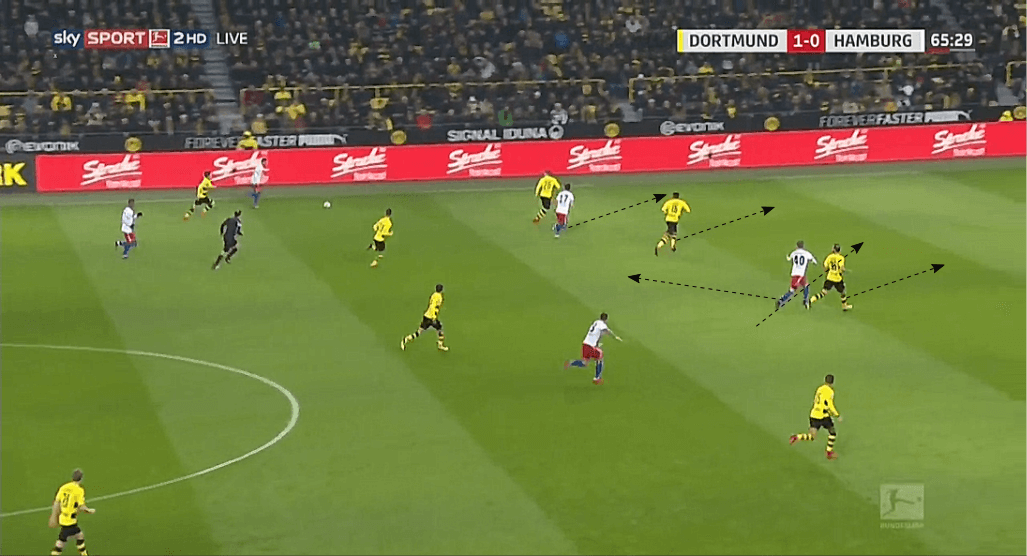 Especially his observing and understanding the consequences of each movement is impressive considering he is only 18 years old. Here, he first moves in the space behind the defensive line but then quickly interrupts his run and drops into the open space between the lines. 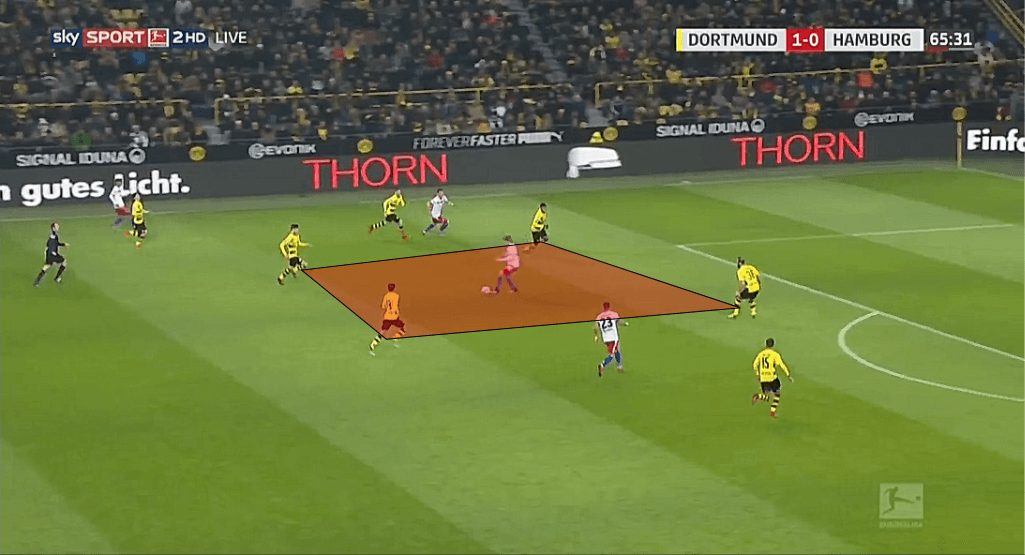 Those quick changes of direction help him to receive the ball without any pressure. Compared to a real striker who plays in the box, Arp is now capable of playing clever passes or threat the defence with quick dribbling’s.

In the end, a striker has to score goals in order to be considered world-class. Arp can connect with the midfield and likes to drop between the lines to play lay-off passes, but in the end, he wants to score goals. And he is pretty good at doing that. His great technical abilities allow him to shoot from any angle and any position. Either he shoots out of dribbling´s or after intelligent movements in tight spaces. 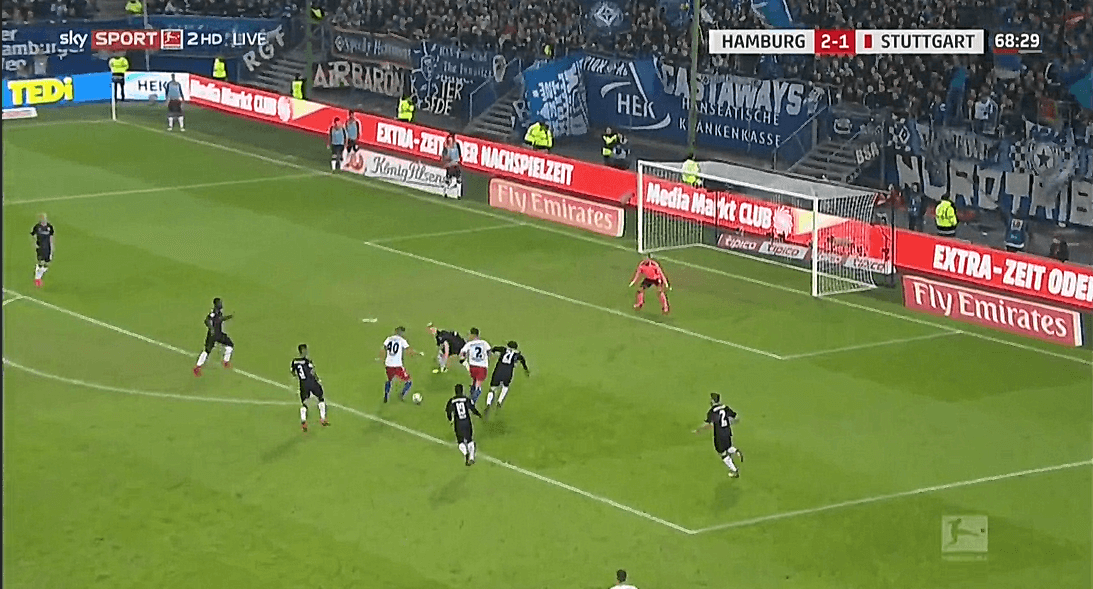 Furthermore, he exactly knows where he has to move in order to get an opportunity to shoot on goal after crosses for instance. His intelligence helps him to find the vulnerable spots of a defence. He either gets defenders out of position by changing direction. Or he anticipates the location in which the cross will fall and sprints in that position when the defender does not pay attention. 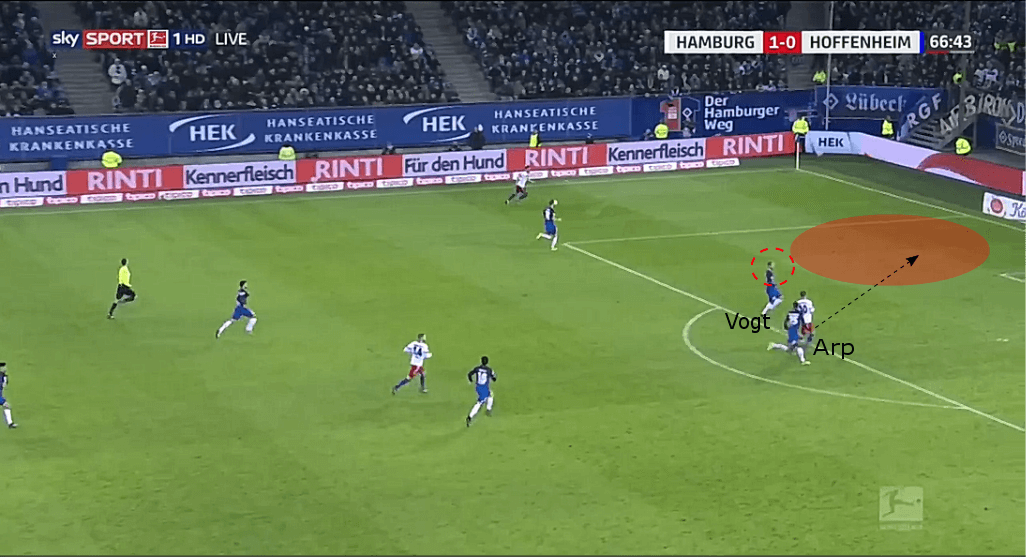 Here, for instance, Hamburg attacks down the left side while Arp is positioned between the two defenders who have to drop. Arp realizes the available space at the first post. Look at Kevin Vogt who has to watch both the ball and Jann-Fiete Arp.

Arp adjusts his position intelligently and challenges defenders through his positioning which brings them into uncomfortable situations. In those situations, Arp has a clear advantage over the defender. Mainly because the defender has to observe the ball and Arp simultaneously. In the follow-up of the situation above, Jann-Fiete Arp positions diagonally behind Kevin Vogt. Edinson Cavani, for instance, moves similarly. 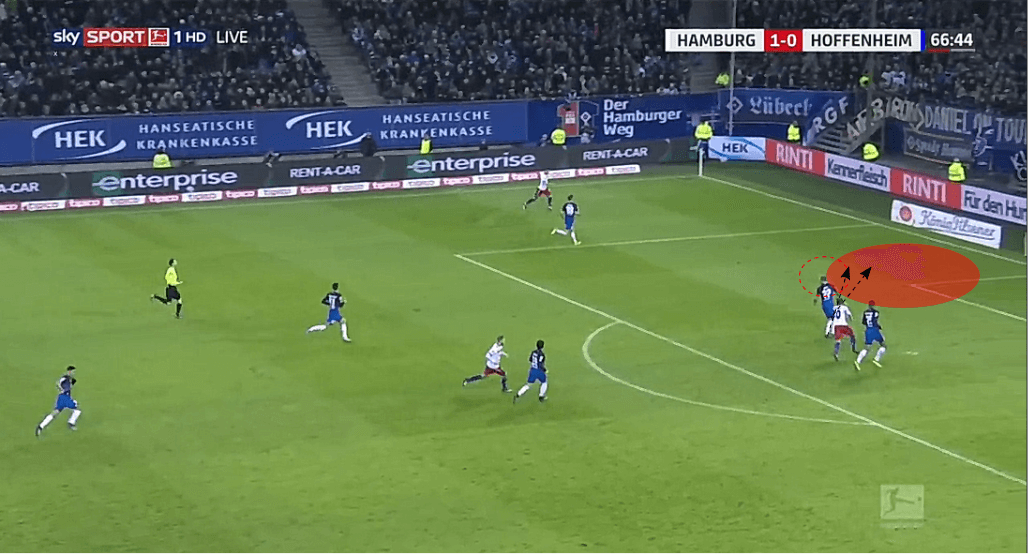 Kevin Vogt has to watch the ball when it gets crossed in. Therefore, he can´t see Arp coming who anticipates the location of the cross quickly and sprints into the open space. Due to that, he has an advantage because Vogt can only react. As a consequence, Arp reaches the ball first and shoots on goal.

Besides his scoring abilities and his tremendous game intelligence, Arp also possesses a great first touch which allows him to destabilize defenders and attack open space with the first touch. He always pushes the ball into the right direction. Or he can curve around the defender without giving him the chance to intercept.

Here, he pushes the ball with his right foot into the centre. The defender tries to challenge Arp but his body position doesn´t allow the defender to get near the ball. His body is positioned diagonally therefore, the defender can´t intercept a pass onto the right foot of Arp without fouling him.

Sometimes Arp lacks the physical abilities to hold his position. Some defenders pressure him during the first touch. He cannot shield the ball with his body because he isn´t strong enough yet. But, Jann-Fiete Arp will manage to protect the ball in those situations when he has more experience and knows how to position his body even better.

As I mentioned before, Jann-Fiete Arp is a striker who wants to get involved in the combination play. The forward constantly moves in order to find open space and function as a wall-player. Especially, when he has to play with the back to the goal he uses layoff passes to connect his teammates. Thanks to his high football IQ Arp´s passes help his team to find space to attack. Most of the time he just passes the ball with the first touch to a teammate or let the ball drop into the open space. 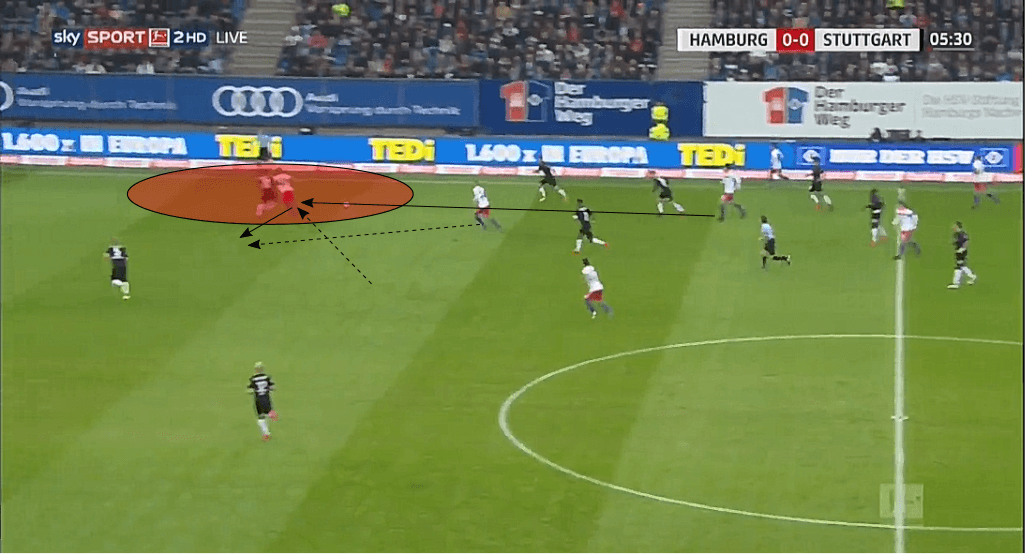 He sometimes seems to be one step ahead of all the defenders due to his vision. Jann-Fiete Arp quickly moves into open spaces and understands the whole situation and the movement of his teammates and the defenders. As a result, those no-look layoff passes are still risky and lead to some turnovers, however, his team benefits from those passes. 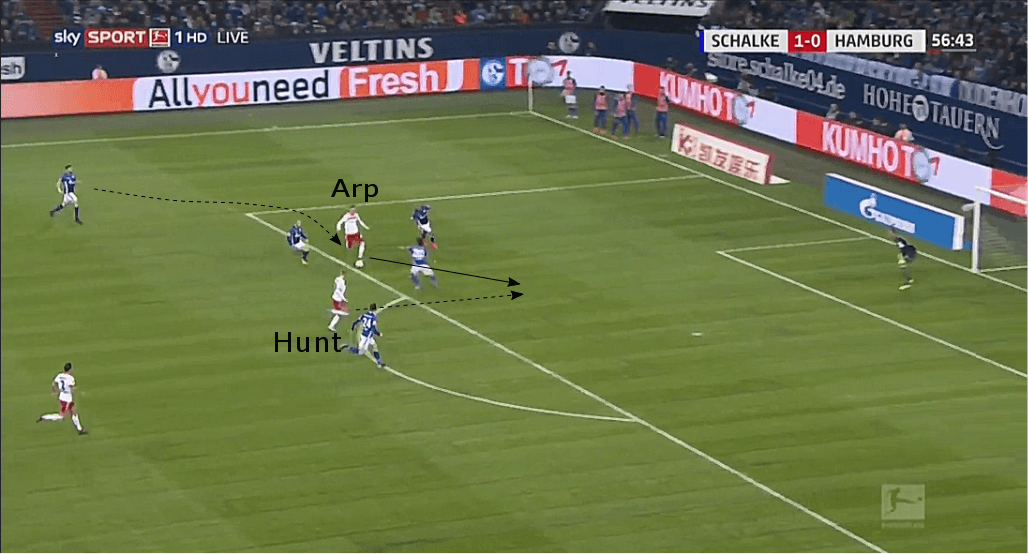 Combined with his speed and dribbling skills Arp can threat a defence in multiple ways. Either with or without the ball, with shoots out of dribbling´s, with passes in open spaces or intelligent movements.

Jann-Fiete Arp can develop into one of the greatest strikers in Germany over the next few years. At this young age, he plays really intelligent and combines all skills a modern striker needs. Clearly, his lack of experience is visible yet. He commits silly offensive fouls, looses the ball in dribbling situation or the defender is just stronger and he can´t protect the ball. For Jann-Fiete Arp the Hamburger SV is the right spot to develop if he can live up to all the hype, Germany has its next great striker.