How to Practice a High Press

During the last decade, the number of teams pressing high up the pitch increased by far.

Coaches like Guardiola, Klopp, Sarri and Pochettino aim at regaining possession as fast as possible. Therefore their sides often press the opponent with an aggressive forechecking.

“Defending is a matter of how much space I have to defend.”

The foregoing statement of Cruyff stresses the importance of minimizing space when defending. That is because less space means less time and increases the number of errors due to bad decision making.

The space which you must defend depends on the type of pressing. Pressing high, one has to defend all the space in the opponent’s half, due to the offside rule which is only active in the own half. This is a huge space compared to the space which needs to be defended in a low-block. In that case, space begins at the halfway line and ends even before the penalty-box. 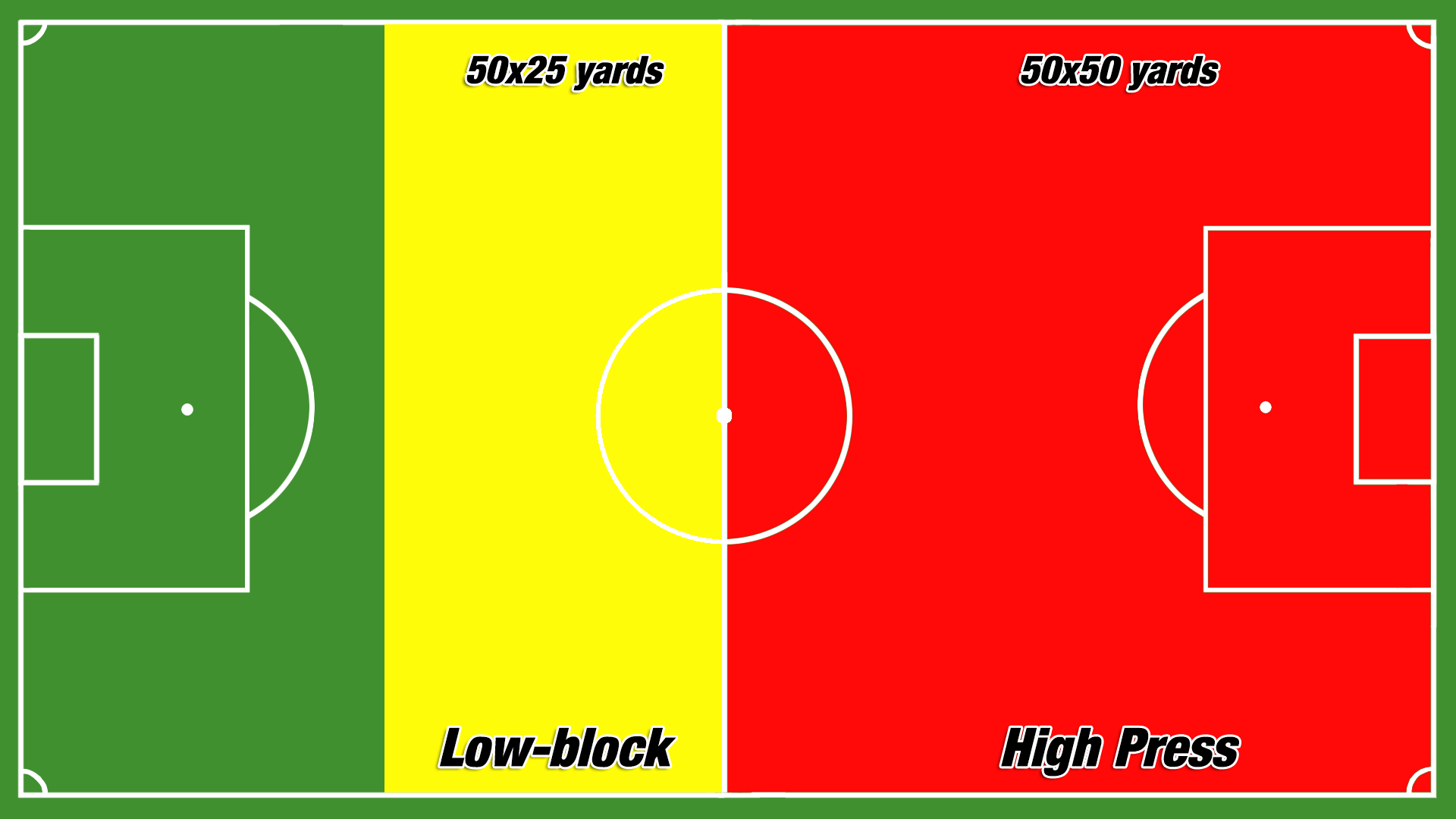 Every coach should clarify where (s)he wants his team to press depending on the system and abilities of the players and the opponent. The first thought should be where and when to start pressing.

Given the opposition attempts to play out from the back, the opponent will have a numerical advantage since the goalkeeper is an additional man leading to a 10v11 situation. Because of that, players will need to use their cover shadows to be able to nullify the numerical disadvantage.

Pressing high up the pitch requires a specific style of defending. Whereas sitting back in the own half allows defenders to react on the opponent’s actions, forechecking requires active defending.

Pep Guardiola, asked about the way his players should act out of possession, he told:

“I want my players chasing the ball like (dogs chase) dog bones.”

This metaphor stresses the urge to regaining possession as well as an aggressivity. If one combines this fact with the tactical considerations from above, it is clear that pressing high is very intense. Therefore a lot of sides struggle to maintain the forechecking the whole match. Players with abilities like a good endurance, pace and the will to get the ball predistanted for a high press.

Before training sessions, coaches should be aware of what rules or principles they want to teach their players. In order to do so, analyse the game to find out what is needed.

There are some useful principles when pressing high up the pitch independent from the areas and the moment of pressing. As compactness is very important in order to press successfully, forechecking means moving up with the whole team. This can be described as the first principle of defending:

We press together as a unit, keeping distances to our teammates as short as possible.

As a result of that, a high pressing team needs a high last line of defense. This leads to huge space in behind to effectively exploit with precise long balls. To decrease the risk of getting caught with long passes, one needs to apply pressure on the player with the ball. That way, one can avoid any precise passes, short as well as long ones. These conclusions result in the second principle.

We need to continuously press the ball.

Principle #2 has further effects on our order. Since there is always one player moving forwards to pressure the ball, there are players needed to prevent from passes into the space which thereby opens up. This requires at least two players, one on either side of the pressing player.

(This principle refers to the players who are the closest ones to the ball. Of course, every other player still has a task to fulfil.)

If one repeats the principles in training sessions over and over again, players will become aware of these principles and implement them during matches.

The last question every coach should pose himself is: Why do we press in a certain area? What might be the benefits of pressing early? One possible answer would be: The higher we get the ball, the shorter the way to the goal. As a consequence, we might get the opportunity to counter-attack straight away. If the opponent is well covered, we move to our possession phase. No matter what, coaches have to make their players available to these thoughts for better understanding!

From small-sided games to 11v11

This following abstract will give you some examples of how to use small-sided games to teach your players how to press high up the pitch. It is reasonable to increase the complexity step by step. The order of the drills is close to training session reality. We begin with warm-up exercises guiding our way through small sided games with an advanced number of players to the usual 11v11.

To begin with, one can already teach the players the right mentality during fun warm-up exercises. For instance, “Steal the Bibs” is an effective game to introduce the mentality of chasing the opposition. 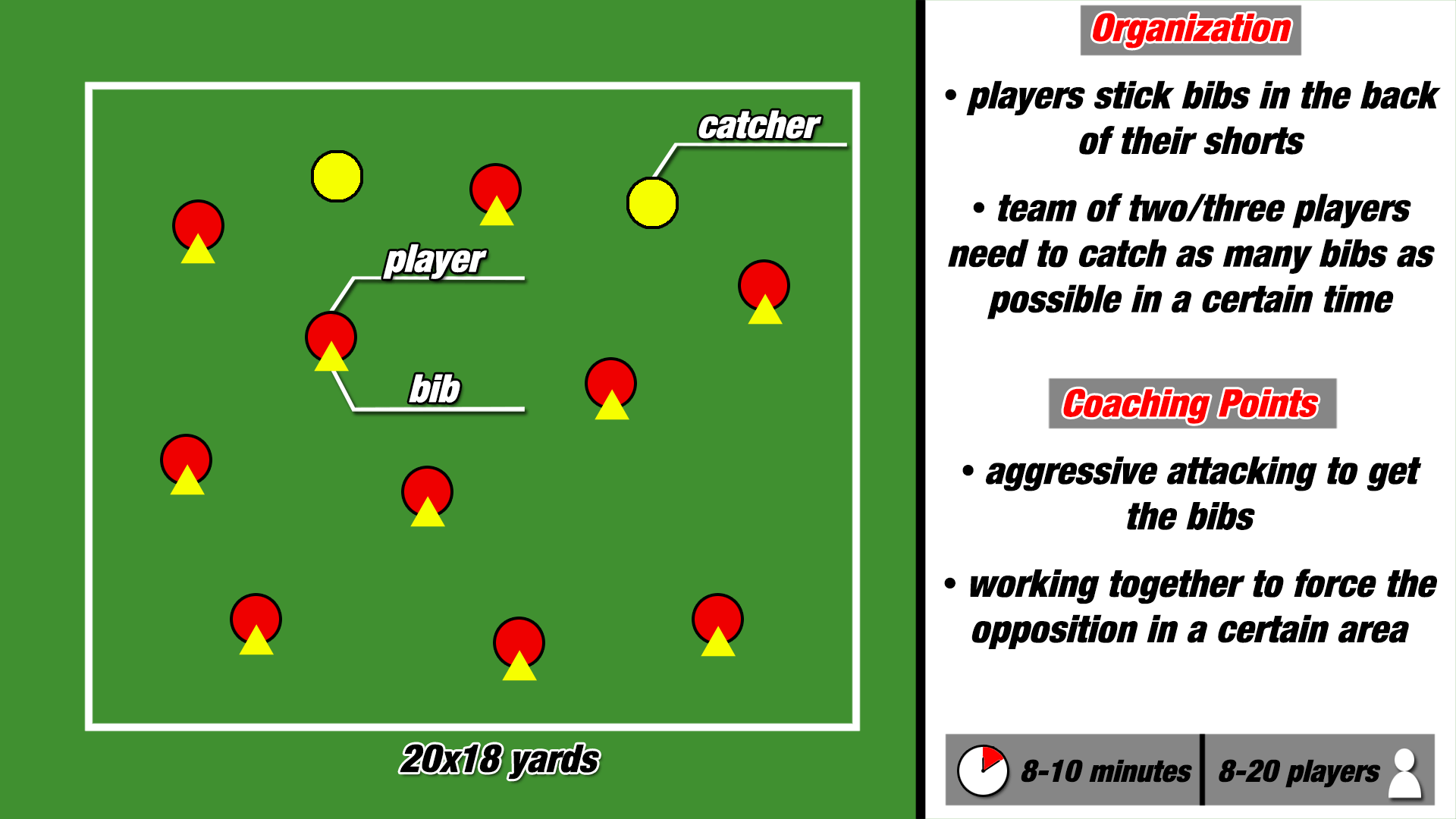 The coach should already encourage the catchers to work together and force the opponent in certain areas to steal the bib.

Beginning to use match-like scenarios, one should start with numerical superiority to simplify and to ensure that there is an amount of several successful actions. To nullify the numerical differences explained above, the pressing team should have at least one more player. Reducing space and the number of players, drills will get easier and players will more likely be able to understand their role. 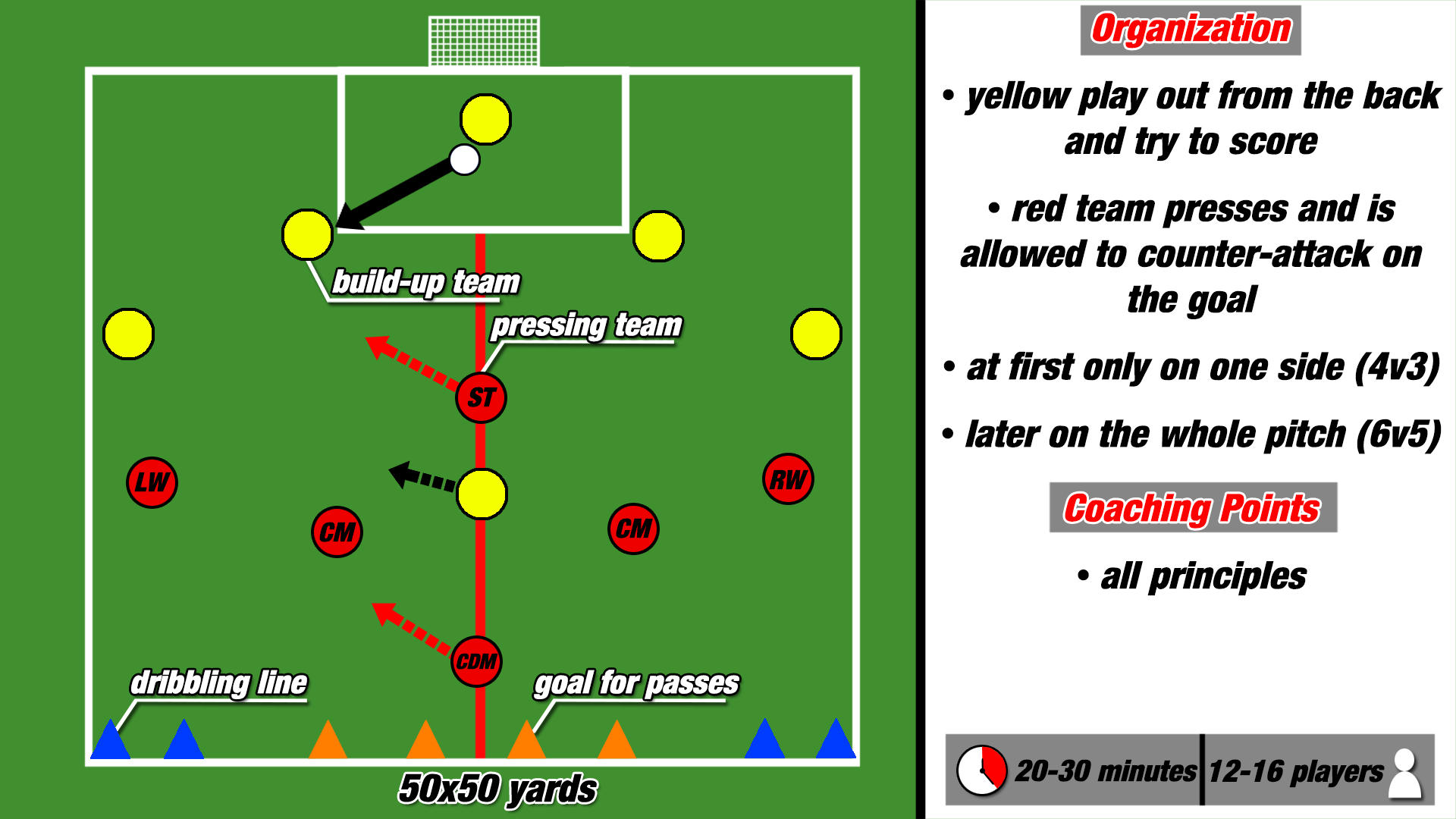 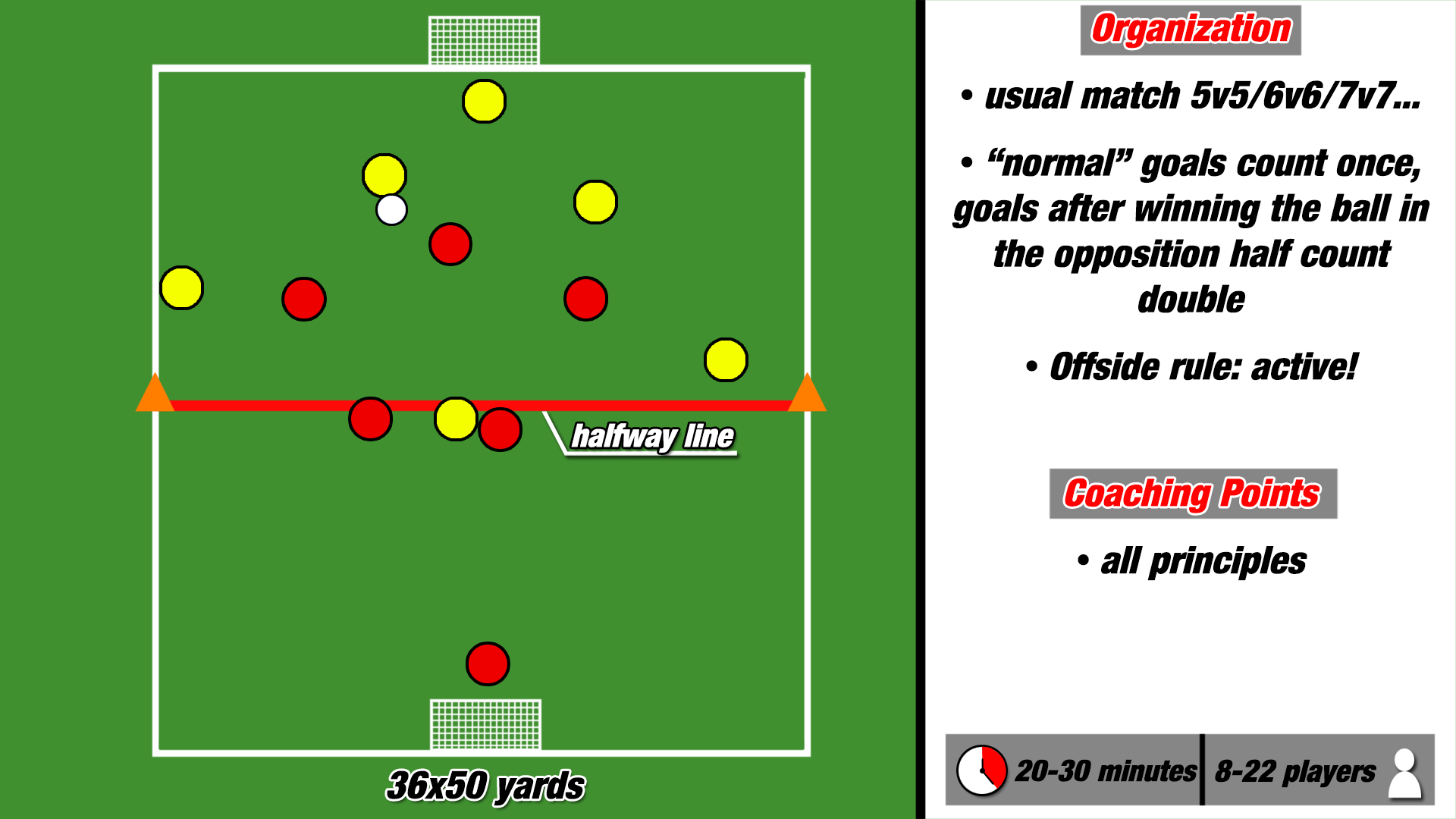 You can extend this drill to a maximum of 22 players. The pitch size can be varied from a full pitch to a more narrow or shorter one. Consider the effect of a different size or shape. The smaller the pitch, the easier to defend, remembering Cruyff’s quote from above.

The foregoing presented match-related drills lay the foundation of a well organized forechecking. In order to ensure the press to be successful, one should practice it in a 11v11 as well. Since football is a complex game, even the smallest detail can have a huge impact!