Aston Villa, known for their European Cup triumphs in the early 80s, in addition to their loyal fanbase and iconic stadium. While their history serves them well, some of their modern-day activities has not placed them within the best light. In 2012, they suffered from a 53.9 million pound loss and was eventually relegated four years later, ending a 24-year stay in the top flight. 2016 was a low point for the Birmingham club, having to battle it out in the EFL Championship, but, Chinese investor Tony Xia saw this as the perfect time to purchase the club and be the catalyst to their revival.

From this point, Aston Villa’s fortunes changed for the better; due to their new owner’s investment off the pitch, and local lad and academy product, Jack Grealish. Aston Villa’s academy has produced players who have gone on to have lengthy and successful careers. Gary Cahill at Chelsea, Gareth Barry at Manchester City and Gabriel Agbonlahor have all accumulated 1396 Premier League appearances, and Jack Grealish was the next player to join this list. England’s second division was the perfect development platform for Grealish’s growth, with regard to his understanding of their game. Within Villa’s two-year stay in the Championship, Grealish’s potential started to become fact, as he captained in his hometown side to promotion back into the topflight, through the playoffs.

In the Premier League, Grealish continued to showcase his talent, which attracted the attention of a heavy hitter at the top of the table. During the summer of 2021, Grealish left for Manchester City for a record-breaking fee of 100 million pounds. While the blue side of Manchester has added a piece to their jigsaw, Aston Villa has subsequently lost one; this is not to suggest that Villa did not spend the money wisely, or carry on to be successful. With the likes of Danny Ings and Emi Buendía, the boys from Birmingham are still a competitive outfit. With this being said, having a player like Jack Grealish creates a sense of relatability to a fanbase because of his local roots, and with him gone, a void was created. Fast-forward to the start of the 2021/22 season, this void may finally vanish through the rise of Jacob Ramsey. The young attacking midfielder has captured the heart of Villa fans; the rapid change of manager may have knocked a young player off course, but this is not the case as newly appointed manager Steven Gerrard has propelled Ramsey to new heights. With this season being Ramsey’s breakout year; the U21 England international still has facets of his game that needs improving, but the talent is clear to see.

In this tactical analysis and scout report, I will be discussing Jacob Ramsey’s offensive strengths, in addition to noticeable weaknesses. Lastly, I will evaluate and project the future of Ramsey.

So far this season, Ramsey has featured in quite a few attacking positions under both Dean Smith and Steven Gerrard. His managers have used him within the front line as a right-winger and as a number ten behind the striker, but most of his minutes have come when played as a number eight in a midfield three. Dean Smith at times opted for a 3-5-2 to accommodate both Danny Ings and Ollie Watkins. Within this system, Ramsey played as a left-sided central midfield, alongside Douglas Luiz and John McGinn. Within Steven Gerrard’s vision, the formation transitioned from a three-man defence to a four, with a 4-3-3. Ramsey kept his position within the side; on the left of a midfield trident. From this deep position, Ramsey can utilise all the skills he has and can add real value to this Aston Villa attack. 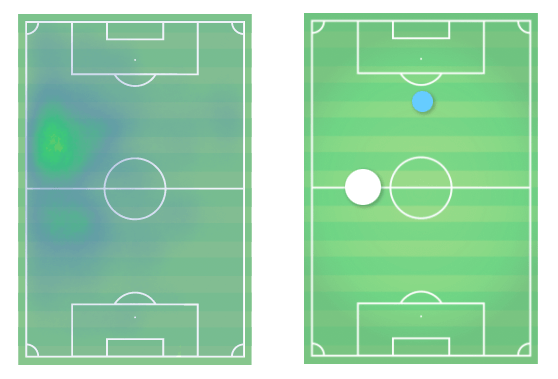 Jacob Ramsey is assertive; this aspect of his game can be viewed in many forms. At first glance, Ramsey’s most valuable asset is his ball-carrying ability over long distances. The young midfield uses his powerful stride to good effect, as he aids ball progression for his side, as well as turbocharging attacks single-handedly when the space is afforded to him. 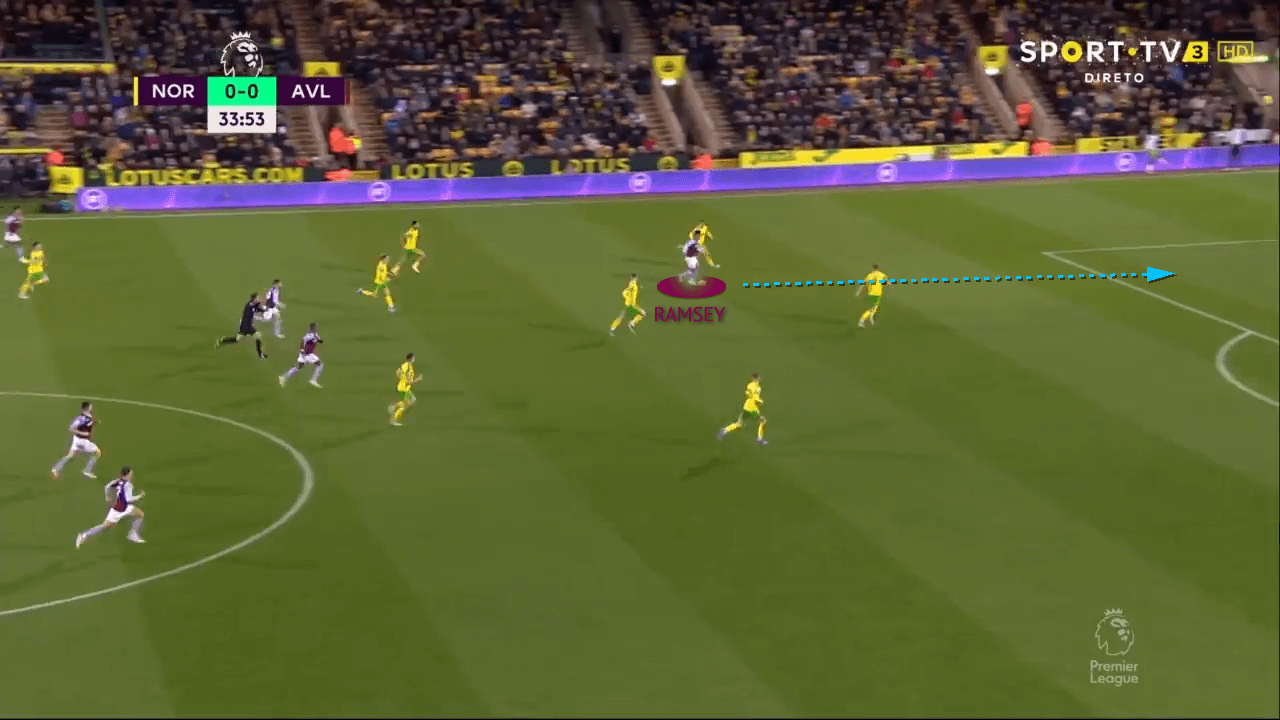 Regarding his receiving, the Villa midfielder is always to think forwards, as he likes to receive the ball facing the opposition goal, ready to start or facilitate an attack. With his assertiveness, comes his intelligence—Ramsey makes good use of his first touch to bypass opposition defenders, as he can quickly shift the ball and create a yard of space and gain an advantage against an opponent. His use of his first touch is useful for when he is opposed; this skill also serves it use as Ramsey changes the picture or direction of the attack, being able to survey what is around him and pick the optimal pass. It is important to mention when faced 1v1 against a defender, Ramsey is not an orthodox technical dribbler that will manipulate the ball past another. Although, the attacking midfielder does make good use of no-touch dribbling, using his swift body movement to offset the opposition player and creating space to drive forward.

Jacob Ramsey does showcase cutting edge offensive talent within the final third, relating to his off-ball movement. The Villa midfielder excels during one-two combinations with teammates within proximity. During these exchanges, Ramsey can lay the ball off, then quickly dart into space in behind the defensive line. Further, Ramsey also contributes to attacks as a third man runner into the box from deep. A perfect example of this can be seen through the two goals scored against Leeds United in early February. During both occasions, Ramsey attacked the space from deep positions, and when in these types of positions, he showcases good and clean ball striking on both feet. 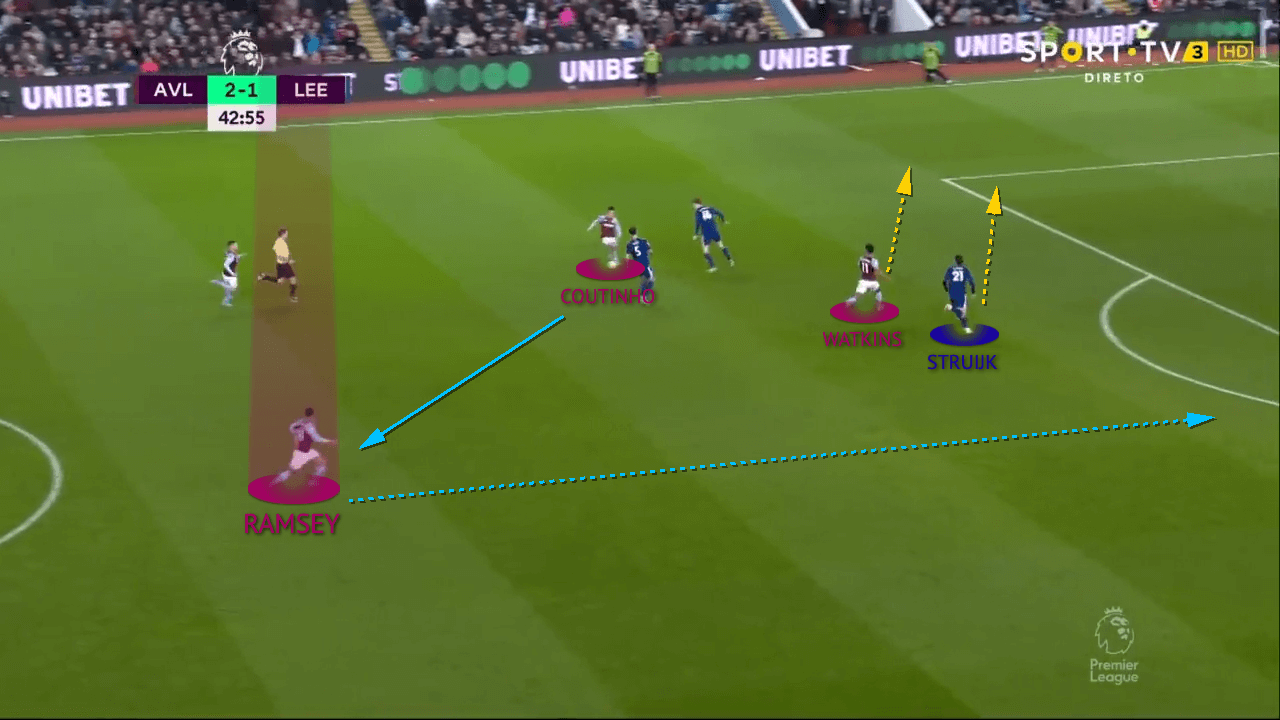 2nd Goal Against LeedsRelating to his passing prowess, Ramsey does not fill the creative chasm left by Grealish, as he did not display line-breaking passing to the likes of Watkins or Ings. With an xA of 0.8 (56 percentile) and 2.08 shot-creating actions per 90 minutes (58 percentile), the shooting creating element of his game does leave for improvement if that is the direction he would like his career to go down. We must not forget he is still quite young and as a result is still malleable.

Since Jacob Ramsey is positioned in a deeper role, he is now tasked with defensive responsibilities. When face 1v1 out of possession, the Villa attack is susceptible to being sidestepped, based on him being flat-footed. When this occurs, he cannot switch his feet quickly enough and mirror the moments of his opposition. Moreover, Ramsey does get caught ball watching at time, taking his attention off the nearby attack, who can make clear runs uncontested. 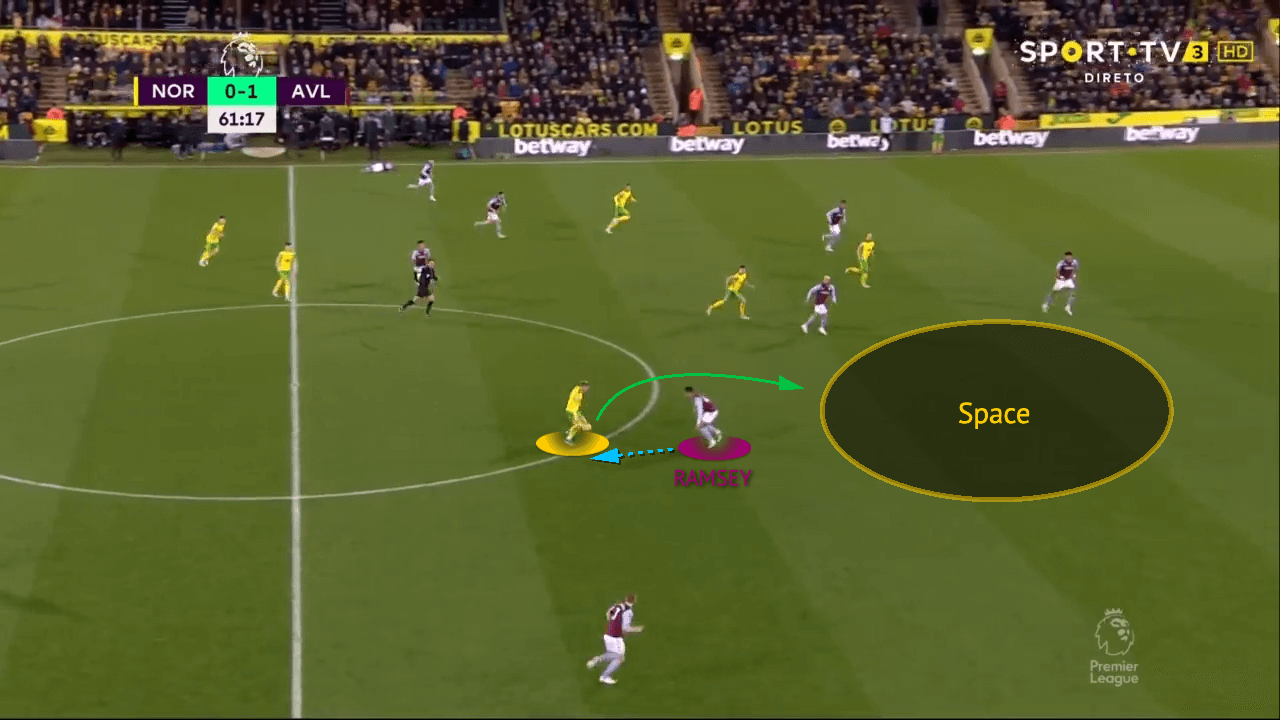 It is worth pointing out, no player is perfect; all players have strong areas of play, together with weak areas to their game. When evaluating the skill set of a player, it is important to establish what is ‘weak’ and what is a ‘weakness’ in correspondence with the position of the tactical role they acquire within their team. Ramsey was not developed within the youth ranks as a defensive player, so it seems logical for his defensive abilities to be lacking. Ramsey contributes on the defensive side of the ball and applies a good deal of effort. However, to increase his value within this Aston Villa side, with the tactical demands he has been given, him cleaning up on his defensive skills would be beneficial.

It has been so far so good for Ramsey in his short and successful Villa career. The young star has a good mixture of skills that make him a valuable cog within any attack.

As mentioned prior, he has played in a few attacking positions over the last two seasons, and as he gets older, I believe a distinguished position must be set for him. Upon review, Ramsey is not a winger, as he does lack the capacity to beat a man 1v1; this is not to imply all wingers must have this skill. My point is, playing Ramsey as an out-and-out winger is not optimal for him based on his abilities. Based upon the Englishmen’s catalogue of work so far, his future lies as a technically sound attacking midfielder with his objective, to penetrate the opposition box off the ball, à la Frank Lampard. I do believe number 10 is still within his reemit, as he can ghost around the penalty area, combine with others and look for shooting opportunities. With this being said, I still believe the number eight position is best for him, as he started slightly deeper and can stretch his legs and drive forward in long distances, while still contributing to the final third. 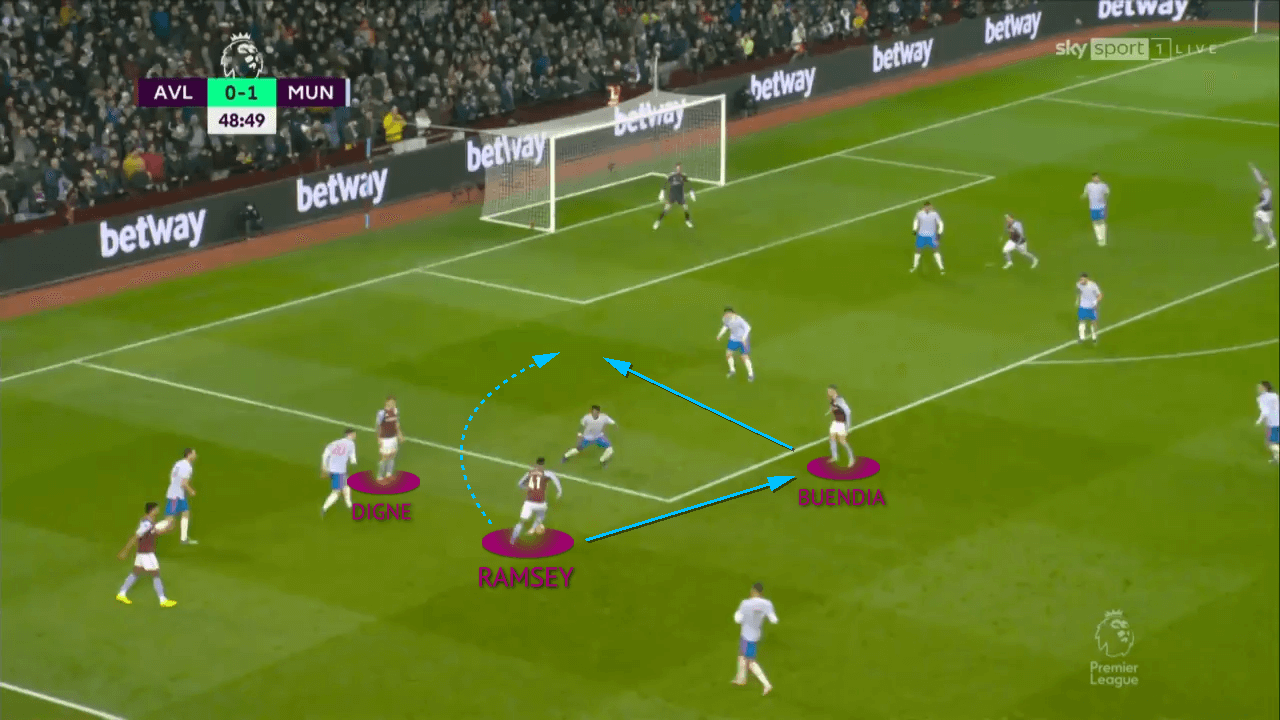 With time on his side, his defensive capacity can strengthen, and if this is the case, we are looking at a player that can make impacts between both boxes.

Aston Villa have seen highs and lows in football over the years, with relegation and financial debt and promotion and the making of Grealish. Some thought Grealish would have been a Villa player for life given his deep-rooted connection, but this was not the case has he left further north to Manchester City for a big-money fee. Villa’s academy has always provided a figure that the fans can connect with, and with Grealish gone, a void was created. In comes Jacob Ramsey, a 21-year-old attacking midfield who has been a star under both Gerrard and Dean Smith. Ramsey is technical and intelligent and constantly looks forward, adding dynamism to Villa’s attack. On a defensive basis, there is room for growth, but development will come as his experience grows.