Danny Ings: How the new arrival at Aston Villa can transform their attack – scout report

Danny Ings is a player very familiar to fans of the Premier League. After playing for Southampton in his youth career, he moved on to Bournemouth, where he made his break into senior football. After beginning to show promise in his early days with the Cherries, he made the switch to Burnley. It was there with the Clarets where Ings began to demonstrate his ability as a striker, scoring 38 times in 122 appearances. This was enough to prompt Liverpool to sign Ings in 2015, but years of injury issues, and an inability to cement himself in the side, left Ings with just 14 appearances in three years.

Southampton subsequently brought him back to Saint Mary’s, initially on loan before completing the deal permanently, where Ings found the form of his life, scoring 41 times in 91 games. And so finally, with Jack Grealish departing Villa Park for Manchester City, Aston Villa were convinced by Ings’ performances for Saints that he was worth a fee reported to be in the region of £25 million. His career with the Villains has started strong, with him registering two goals in his first two games.

This scout report and tactical analysis will provide an analysis of Danny Ings’ individual talent as a player, and what he will bring to Villa over the course of this season.

Ings was frequently used as a lone forward at Southampton, and Aston Villa’s tactics from this season already suggest that it is likely he will be used there too. Ings is tailor-made for this role, given his range of physical capabilities. He has an impressive top speed, but is physically strong and can hold up possession, whilst even though he only stands at 1.78m, he performs respectably aerially as long as any lofted pass is played at a favourable height.

The majority of his actions, indicated by the heat map shown below, suggest a preference for utilizing the space on the left side of the pitch. There is a decent amount of action in the half-space, and interestingly in a deeper, wider area too. However, what is clear to see is whilst there is a good amount of action on the edge of the area, he predominantly operates in that second six-yard box area, whether centrally or on the left. 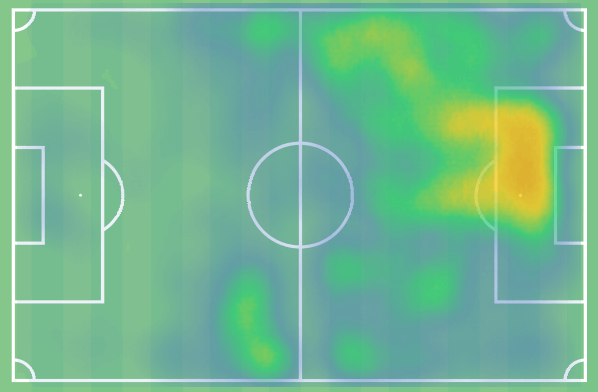 Ings often looks to occupy the centre-backs during advanced attacks, as whilst he will frequently make forward runs into spaces in behind (which we will detail later on in this analysis), he will also check himself and receive in this central space. We can see an example of this from last season where he initially makes the run in behind before changing direction, seeing the run of his central-midfielder going into this area instead, and looks to receive in the ten space. 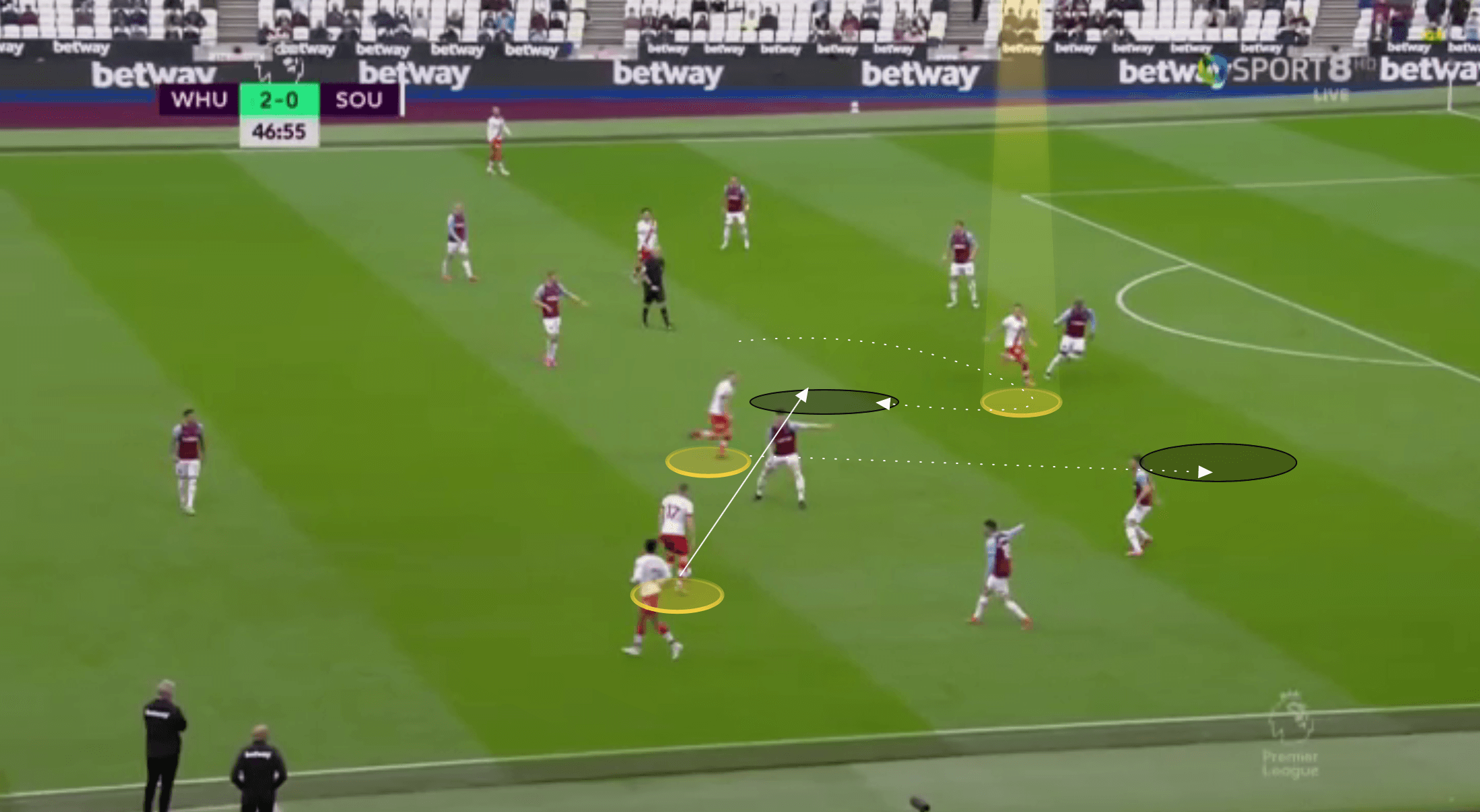 He will make late movements in general, throughout his game. More physical centre-backs will struggle to match his agility, and Ings is able to regularly find a couple of yards of space to receive a ball with this sharp movement. He possesses excellent awareness of the space he creates by dropping into these areas and is highly competent at playing off of one-touch, even with more difficult passes, like the one shown in the following image. 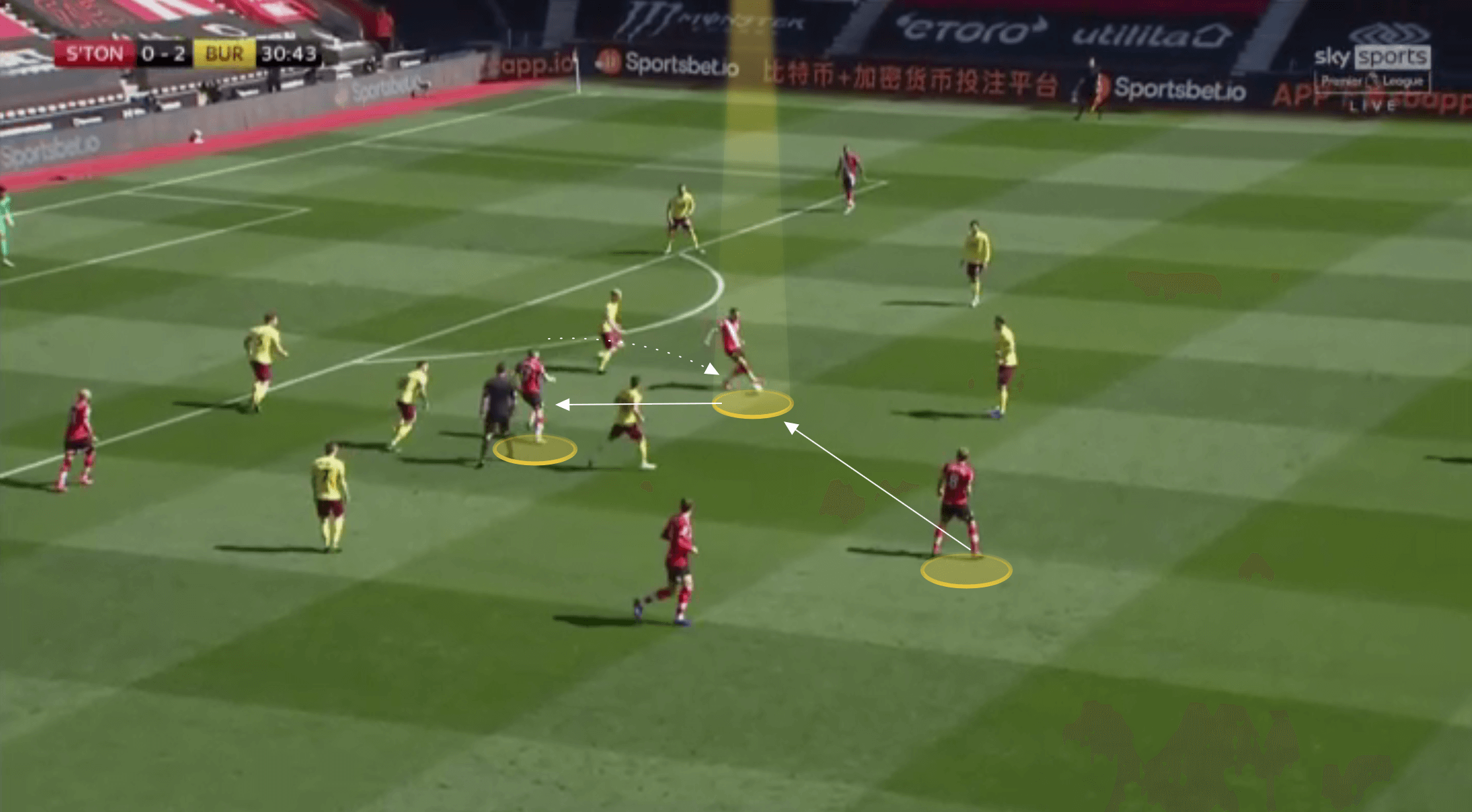 Even without this space, Ings demonstrates an ability to play with his back to goal when marked tightly. Whilst he isn’t the tallest, he has a strong build, and will back into defenders without compromising himself from being able to play these clever one-touch passes around the corner. Again, his vision with these kinds of passes can be seen once more within the image below. 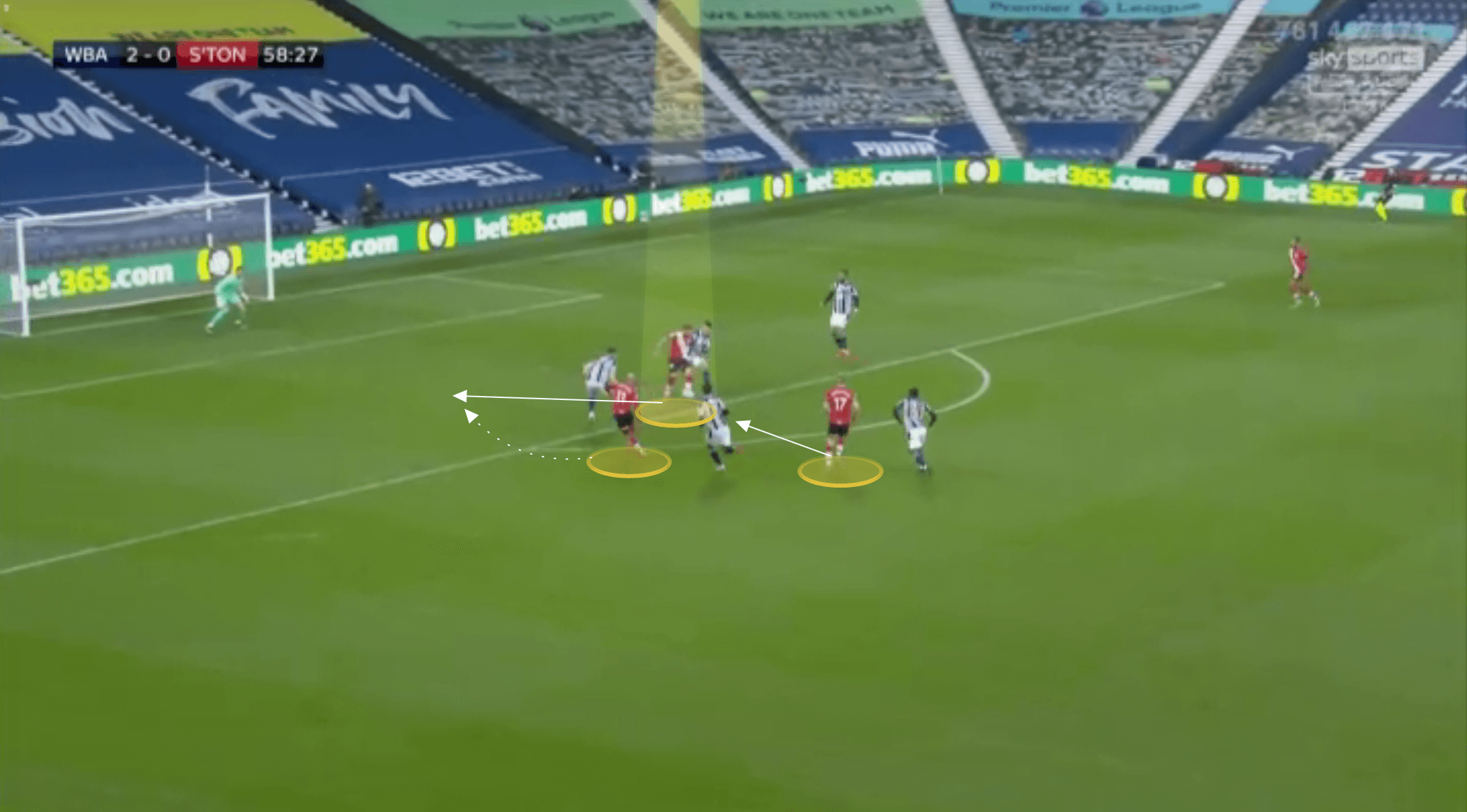 Ings often provides himself as an easy target on attacking transition too. He will keep the gap between himself and his midfield to a minimum during the defensive phase. 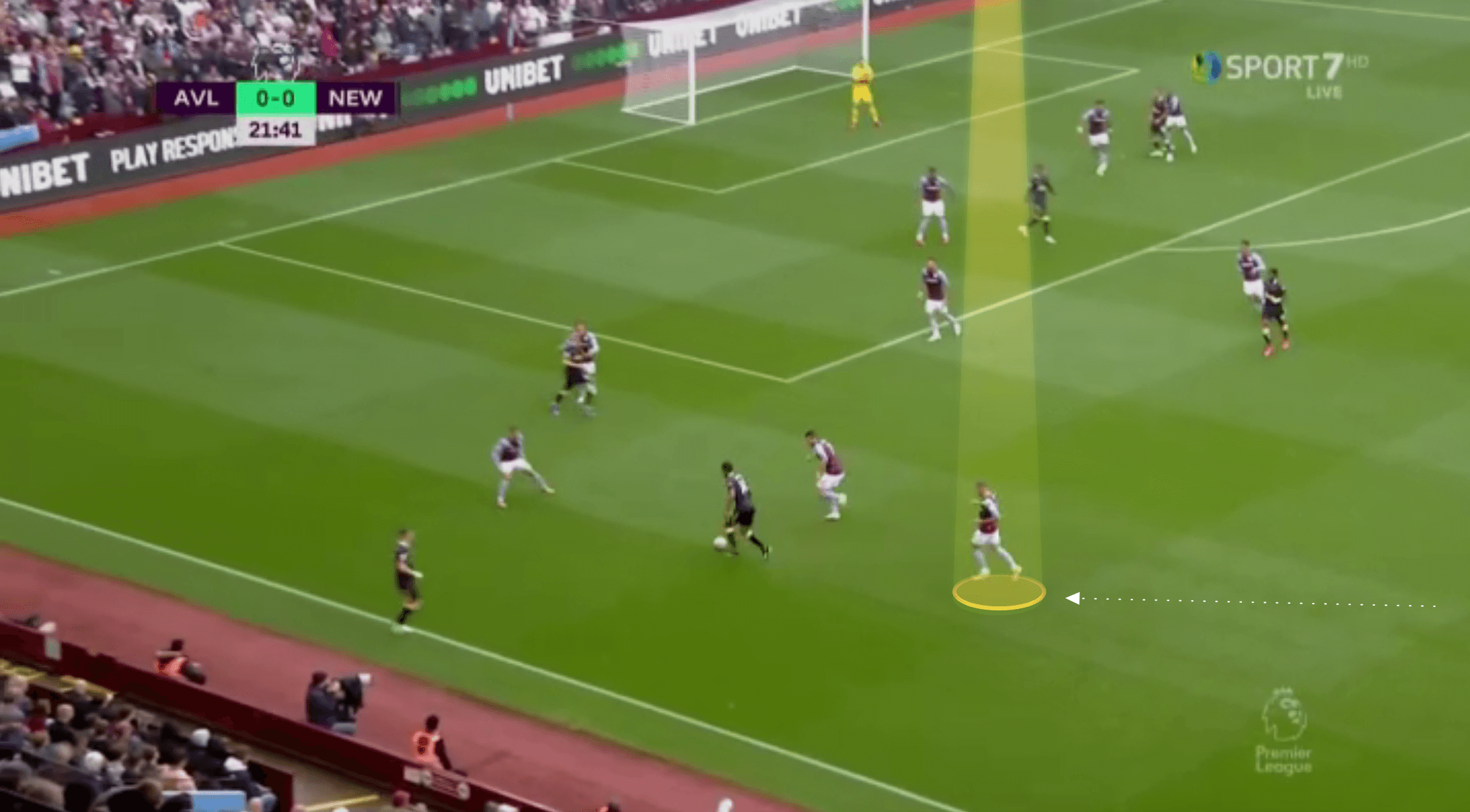 If positioned in close proximity to the turnover of possession, he provides an easy forward pass option and will play similarly quickly himself. He plays well off of one-touch and finds nearby pass options to ensure he isn’t successfully counter-pressed and the ball is retained. 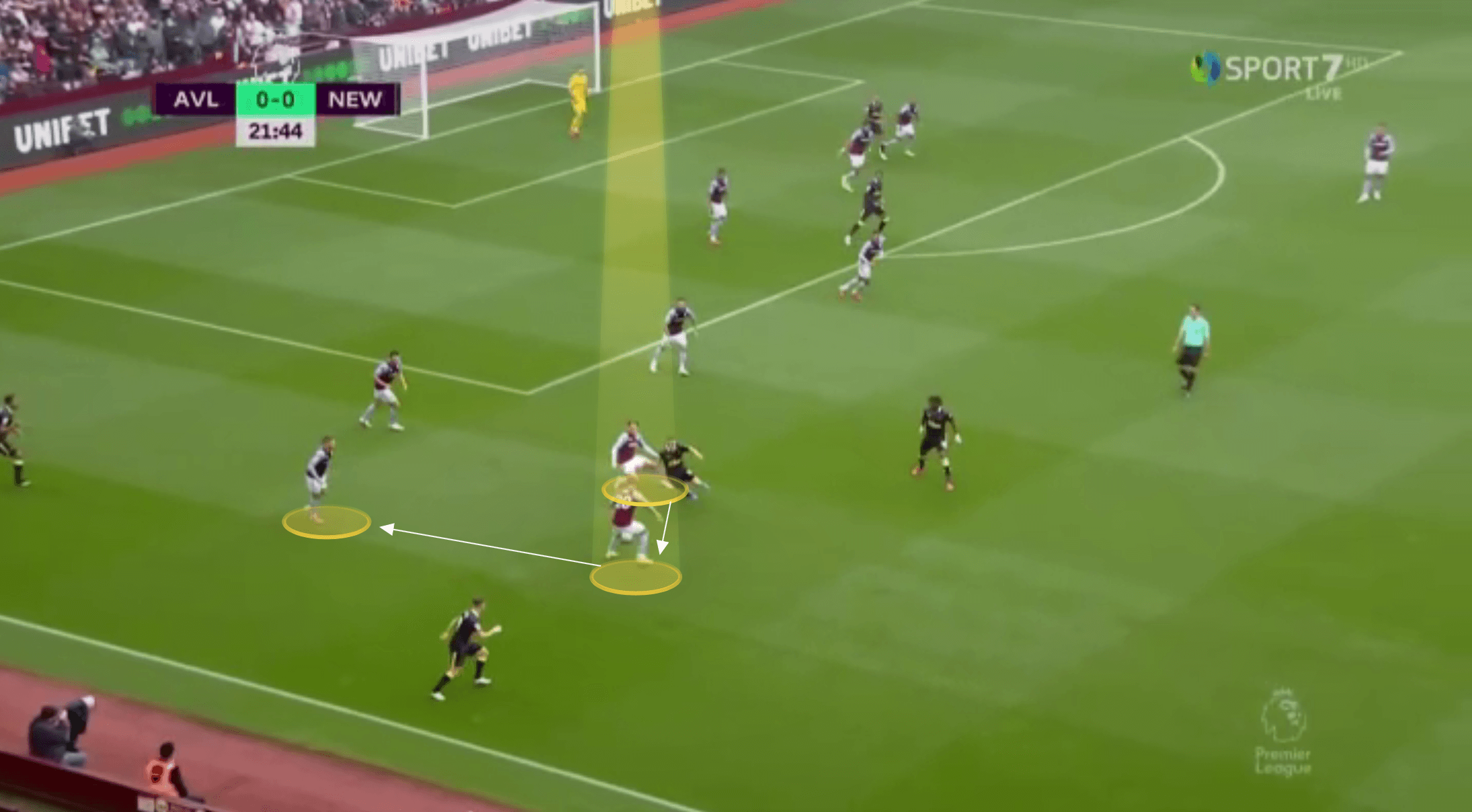 Equally, if the ball is further back, with the defence winning possession, Ings is naturally likely not to be as close to the ball as in the previous two images. However, he still senses the opportunity to provide a valuable, line-breaking pass option. His defenders will look for him as they win the ball, with Ings drifting into safer areas to receive, but most importantly, far away from the majority of the opposition. He is composed in this moment, again showing quality with his back to goal, and may look to retain possession or create enough space between himself and his marker to allow him to thread the ball down the line. 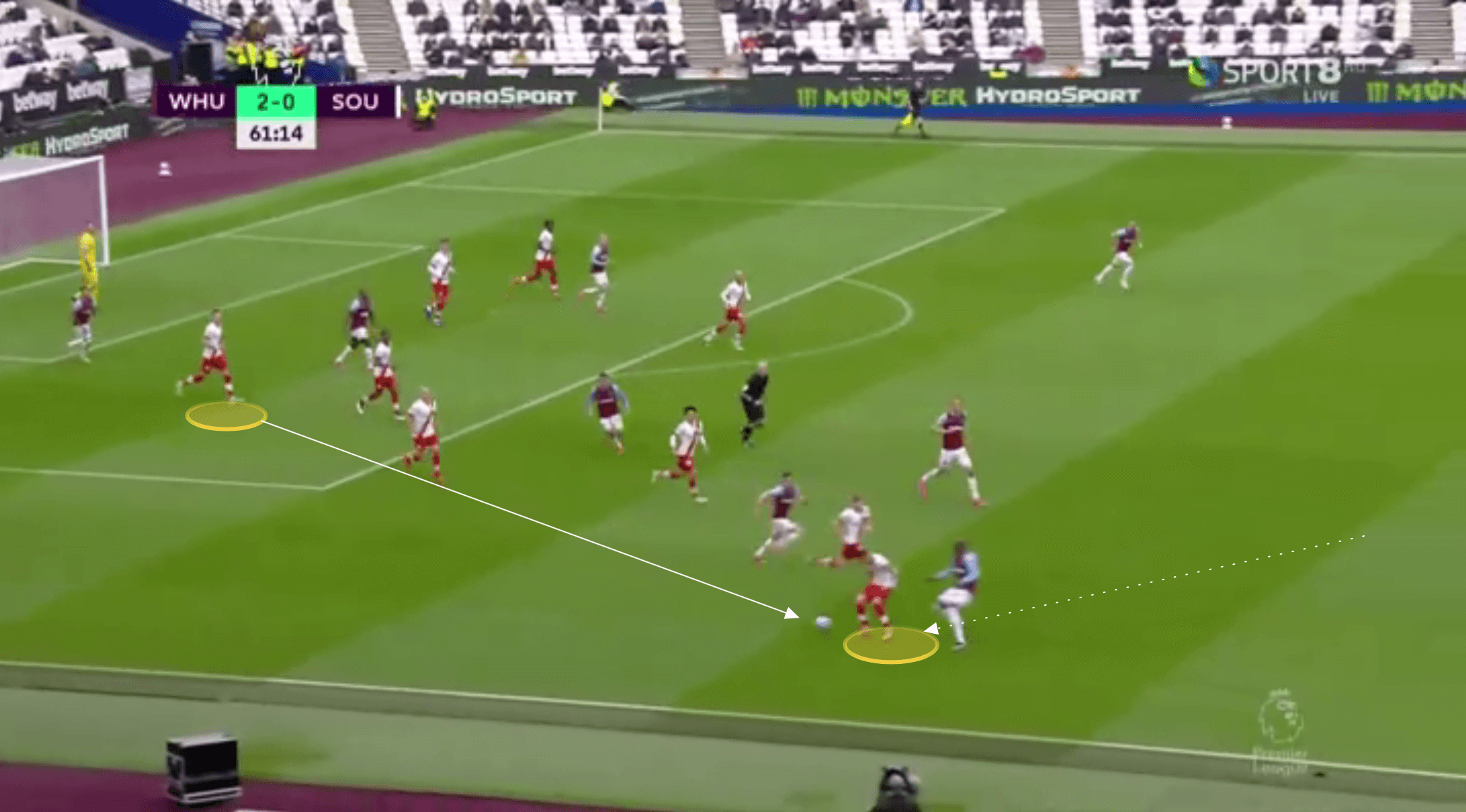 Ings isn’t going to win a high number of aerial duels if the ball is continuously played forward with direct, long balls. If he is tightly marked by a centre-back, and the ball is in the air, the likelihood is that the centre-back will win the duel. However, with his movement away from the centre-back that was shown earlier, Ings can provide an effective target from this type of pass. The trajectory of the pass is vital though. If played at a low trajectory, Ings firstly has the pace to get away from his marker and create enough space where he can win the ball with little contest. With him drawing the defender out, he looks to hit the space behind them too. 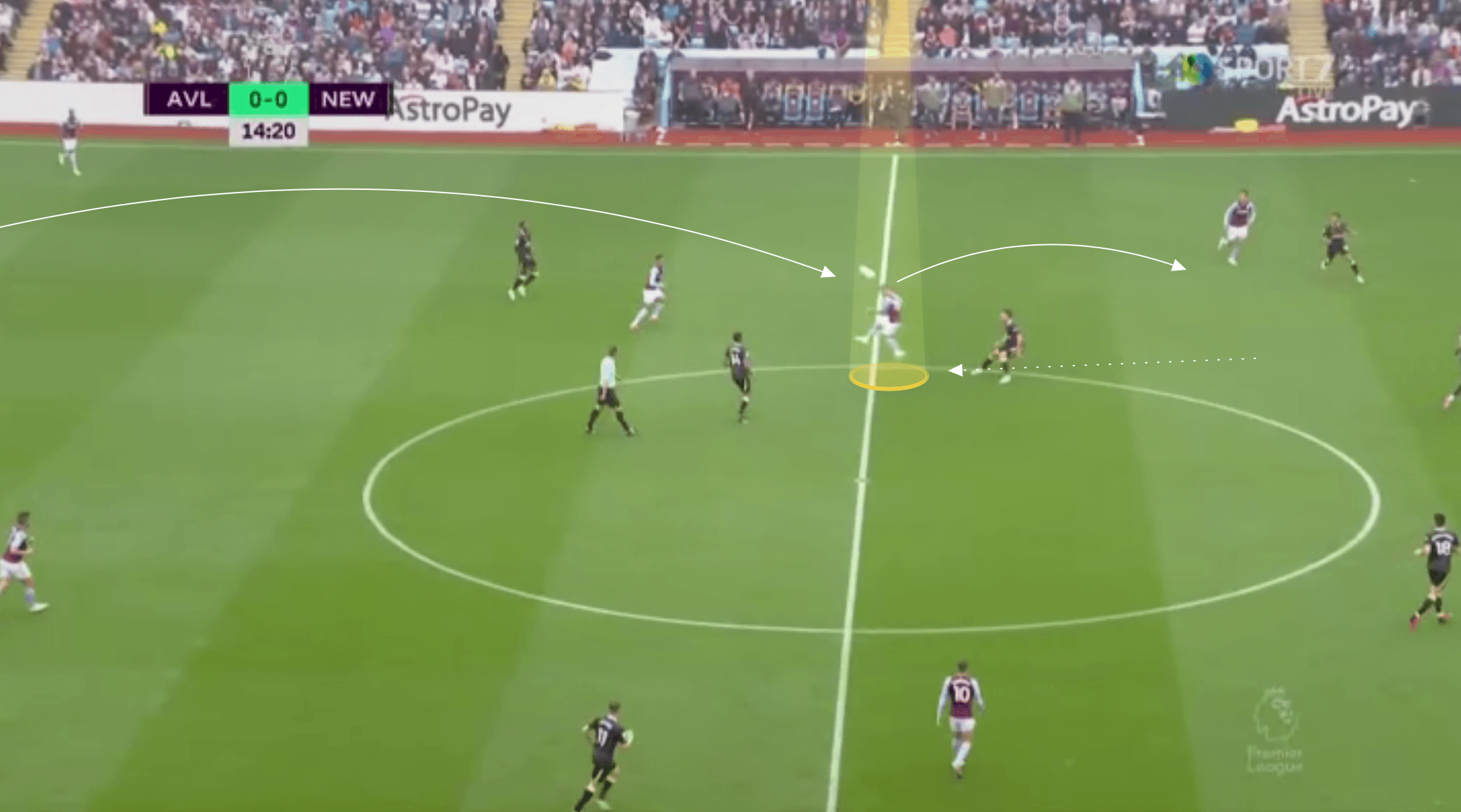 For this to work, the ball needs to be drilled at a lower height, where a simple flick-on from Ings will suffice in directing it into the space he has just vacated. He also needs to have an attacking teammate on his shoulder, ready to gamble on him winning the ball and making the run in behind. Villa worked this with some success against Newcastle. 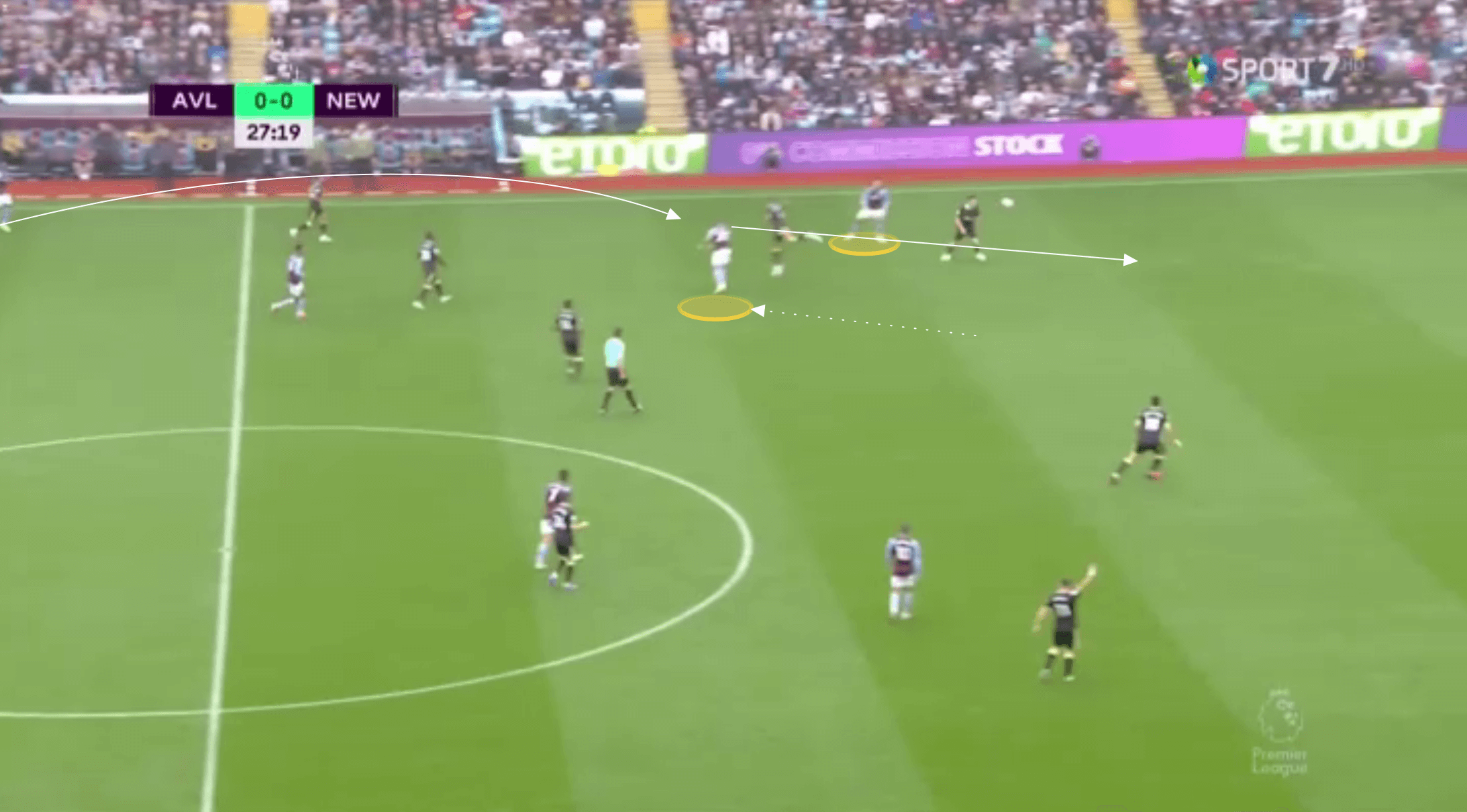 Capitalising on space in the backline

For Southampton, Ings looked to use the movement of his nearby attacking teammates to draw out the defenders and create space for him to run behind. Southampton’s two 8’s in this example below pushed high and looked to draw out either centre-back with their forward movement. 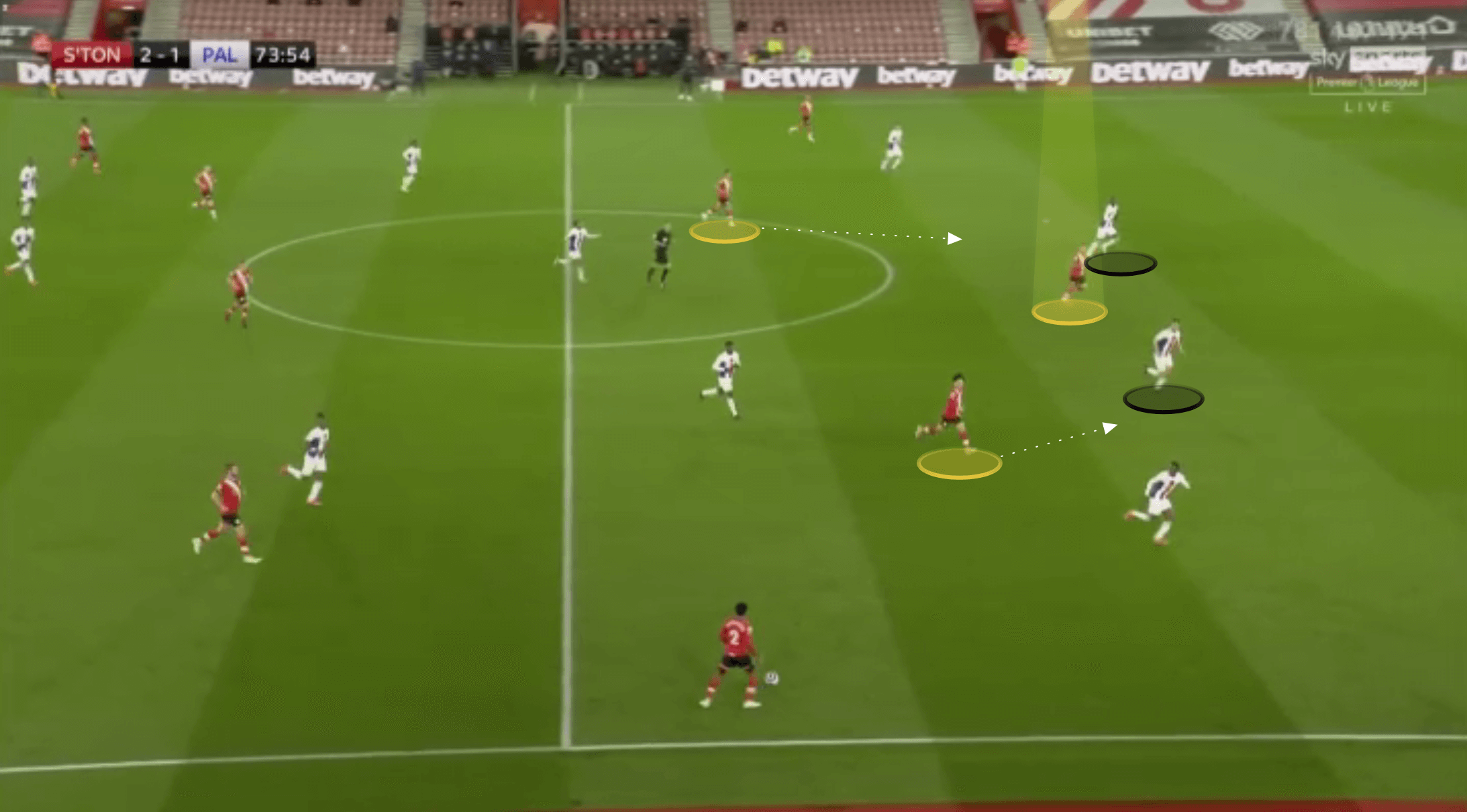 Ings will constantly look for this opportunity when attacking and can look to latch onto a pass against a high line, or continuously watch for the moment, even if it’s against a lower line.

In this example, the play developed a little more, but one of his midfielders was still able to receive the ball in between the lines. 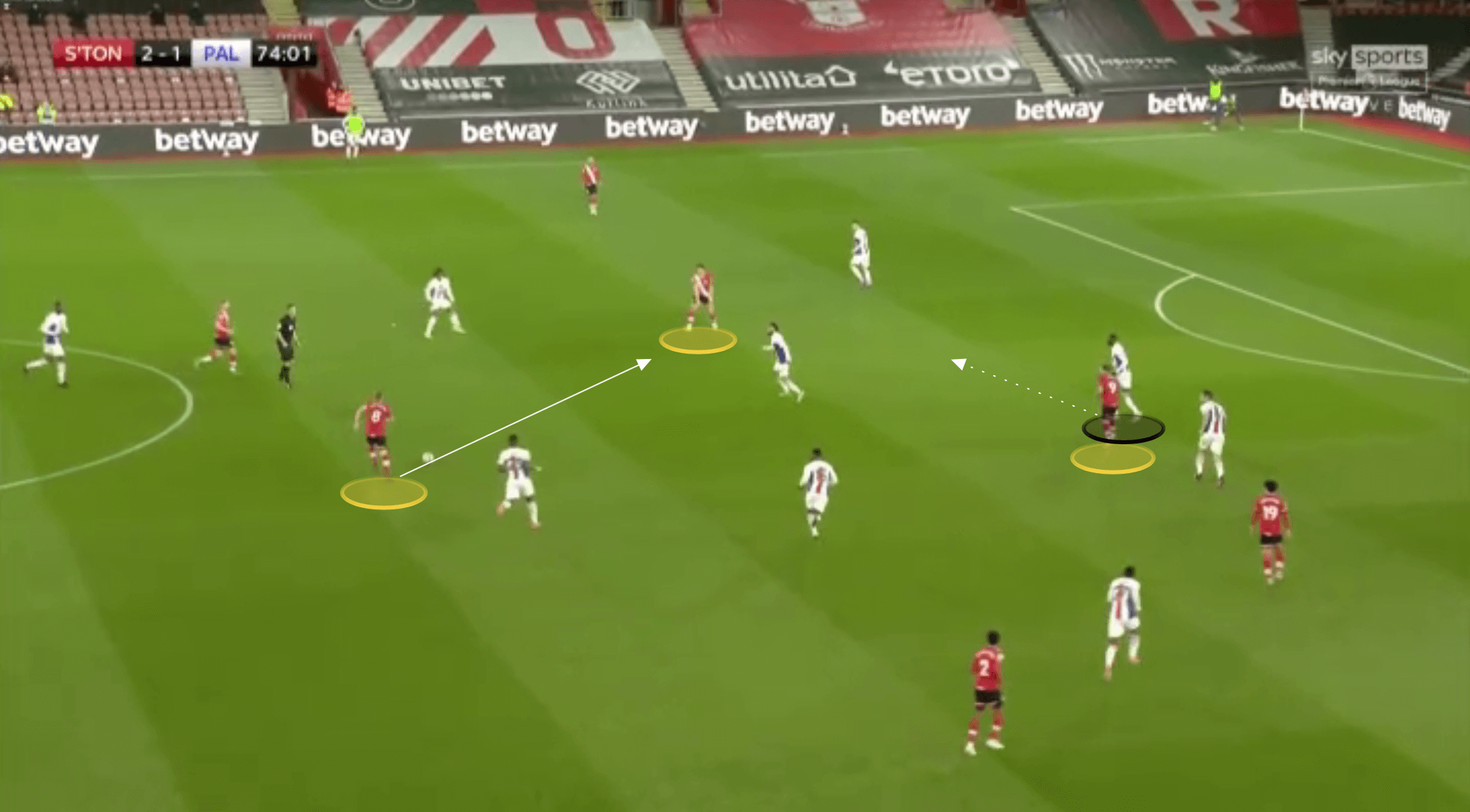 With the centre-back being drawn forward to engage, Ings could steal into the space behind this player to latch onto the through pass played into the 18-yard box. 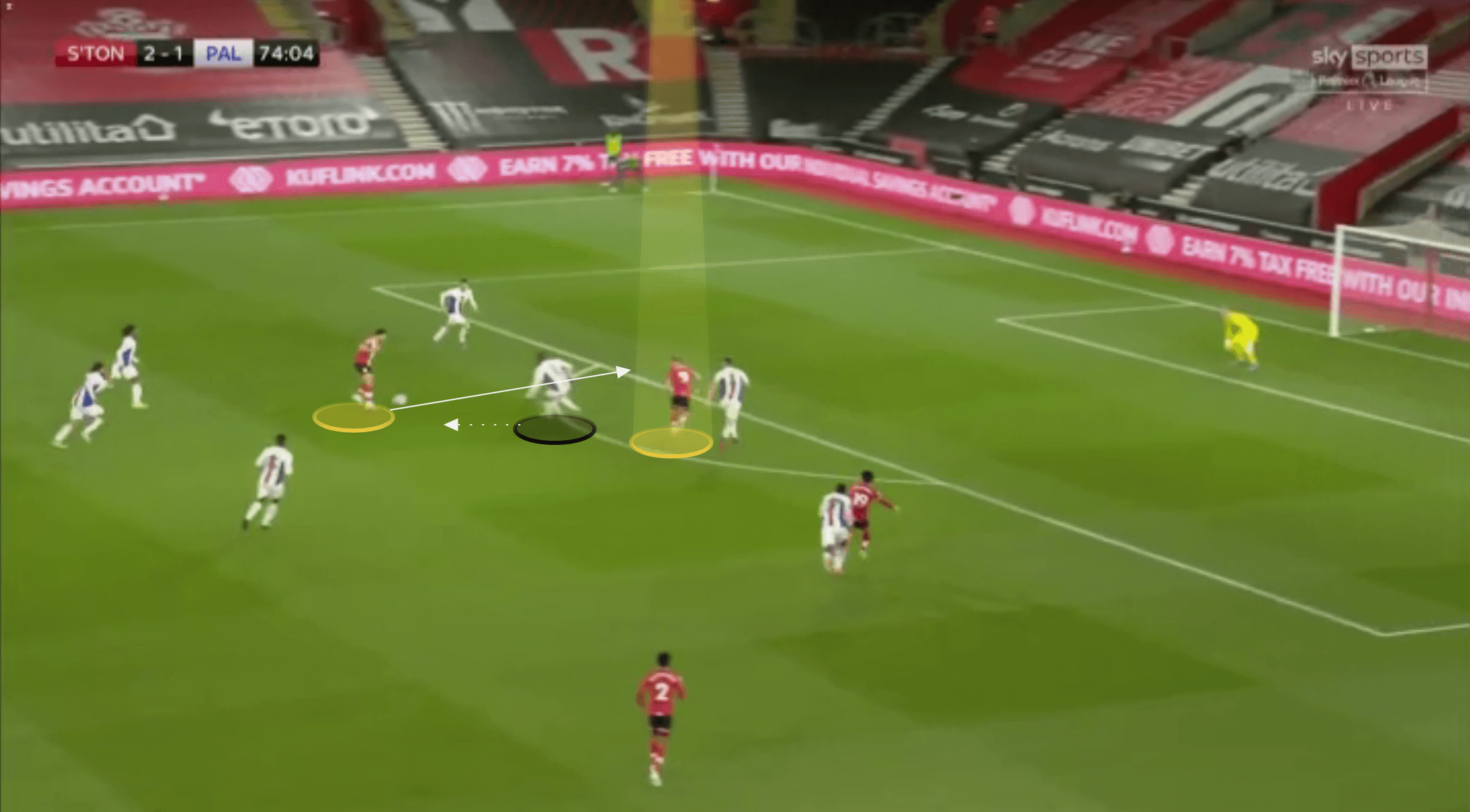 This pattern can be seen similarly in the image below, albeit from a different passing angle. 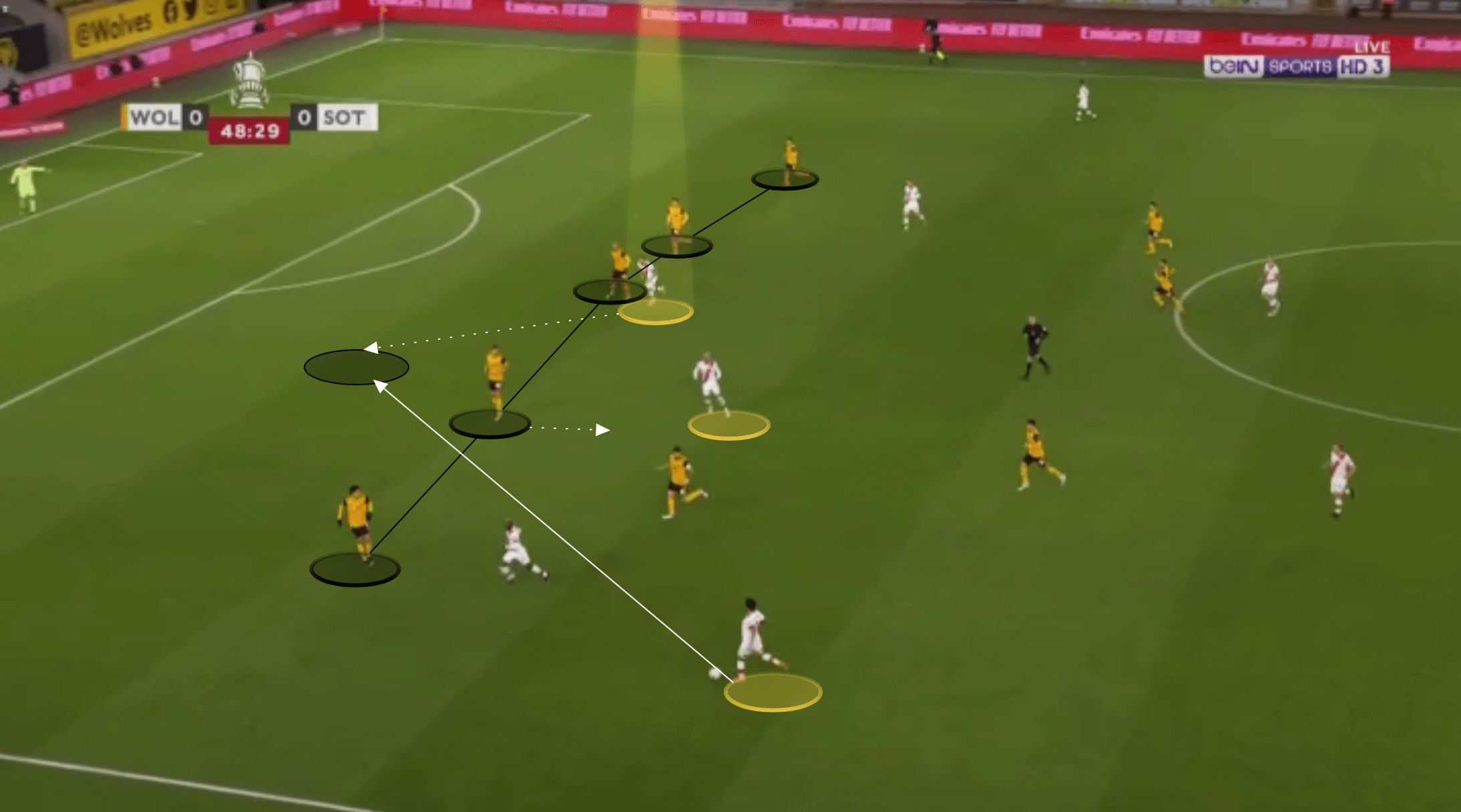 Ings shows a quick reaction to an attacking transition in the final third too. He frequently positions himself in between the two centre-backs as the opposition look to play out. As the ball is won back, as it is in the image shown below, Ings instantly gets side on, creating enough space for the through pass, and looks to align himself with the last line of the defence. 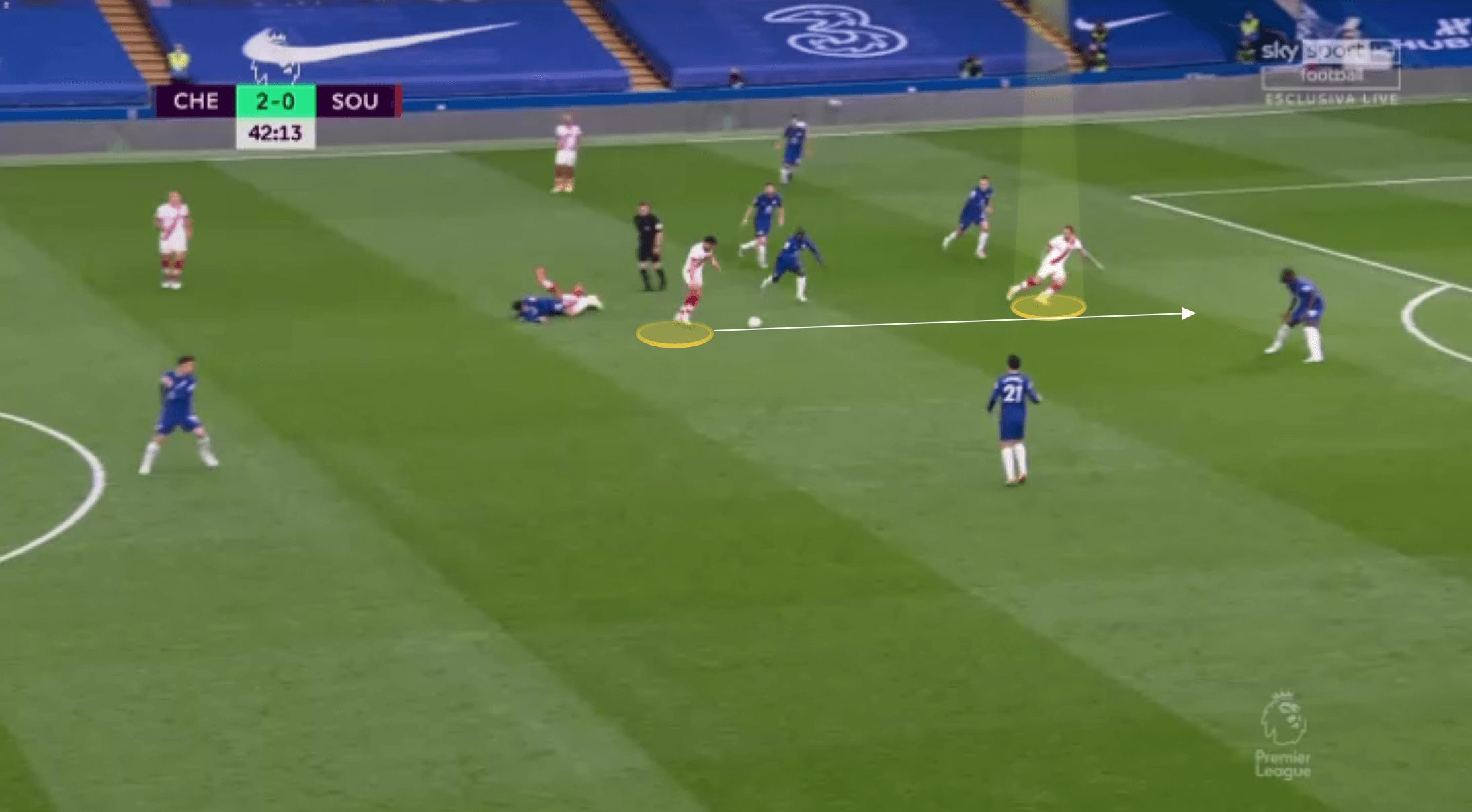 Whilst Ings may look to drift wide onto the left flank at times, the bulk of his shots come from central positions. The next image shows his shot map from the 2020/21 season with Southampton. 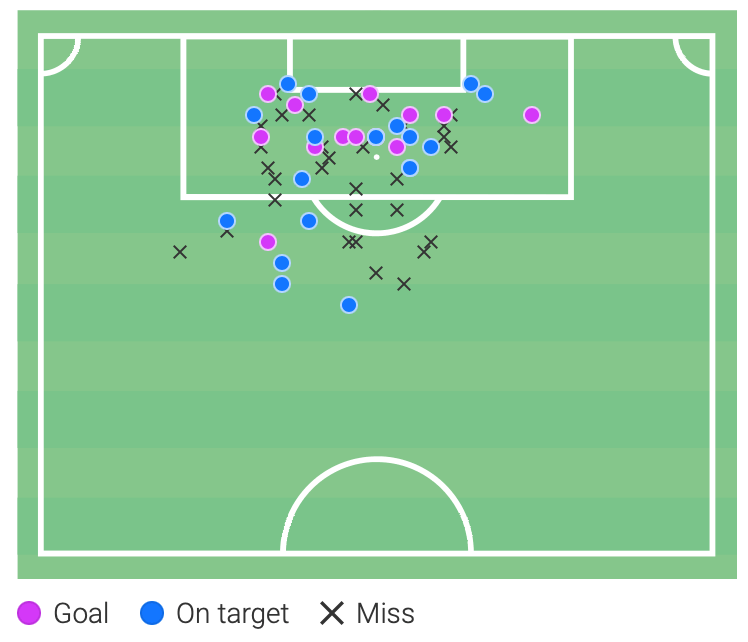 Ings has three main tendencies when it comes to accurate strikes on goal. Firstly, he has a penchant for taking on shots from just outside the area, generally from left of centre, but he can strike from the middle too. He doesn’t take these on from the right side, however. When operating centrally, his first instinct is to look for the pass in behind, making that run shown earlier as a defender steps out of the backline to engage the ball-carrier. However, if there isn’t the space for this kind of pass, Ings will adapt by dropping deep to receive. We can see him doing this in the image below as he recognises the compactness of the opposition defence, blocking him from receiving the ball in behind. 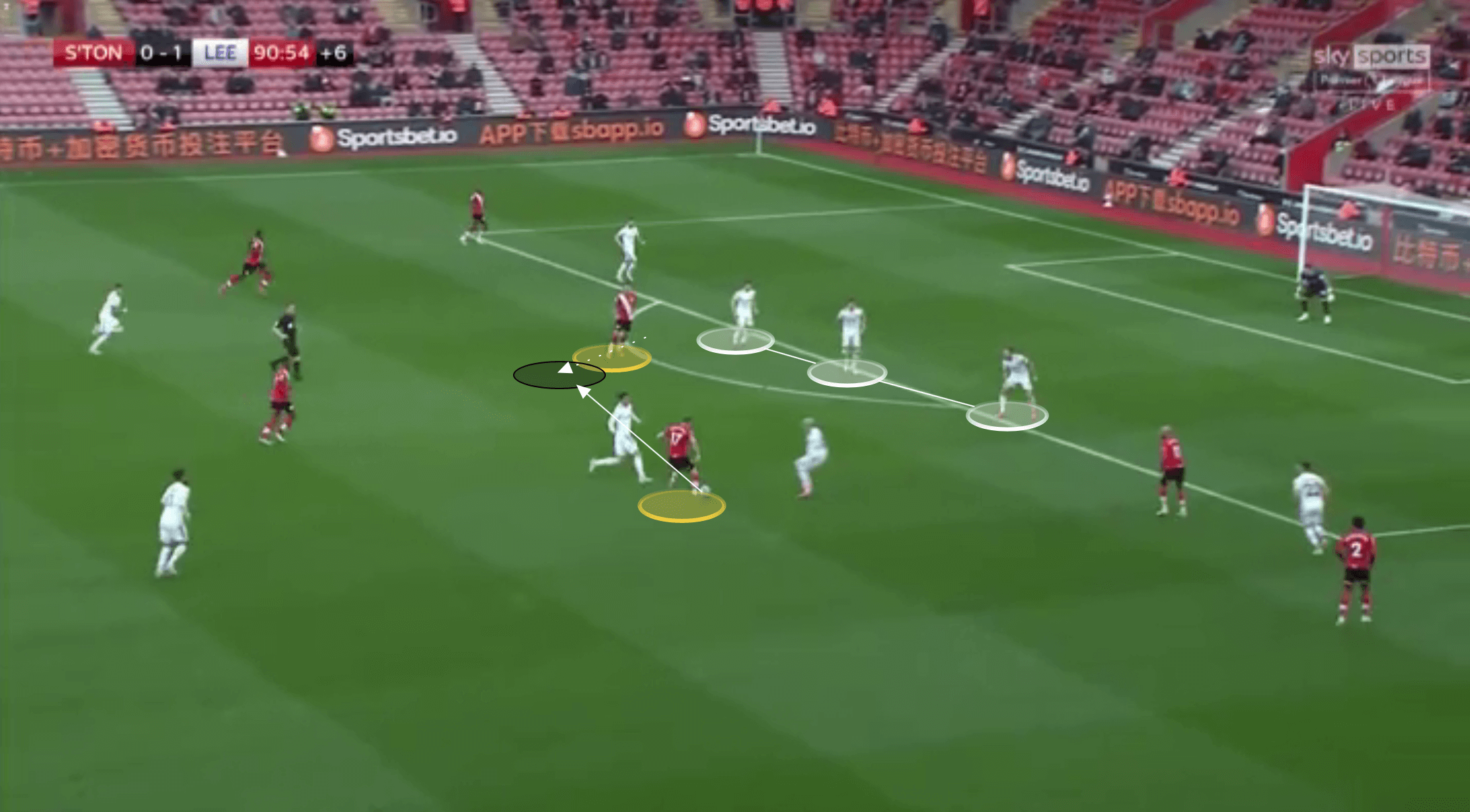 When receiving on the edge of the area, Ings makes his decisions quickly. He will simply look to shift the ball inside and take the shot on early, without setting himself and allowing the goalkeeper to expect the shot. He opts for power with these shots, however, the closer to goal he moves, the more likely he is to place the ball. Either way, he has excellent accuracy in picking out the far corner. 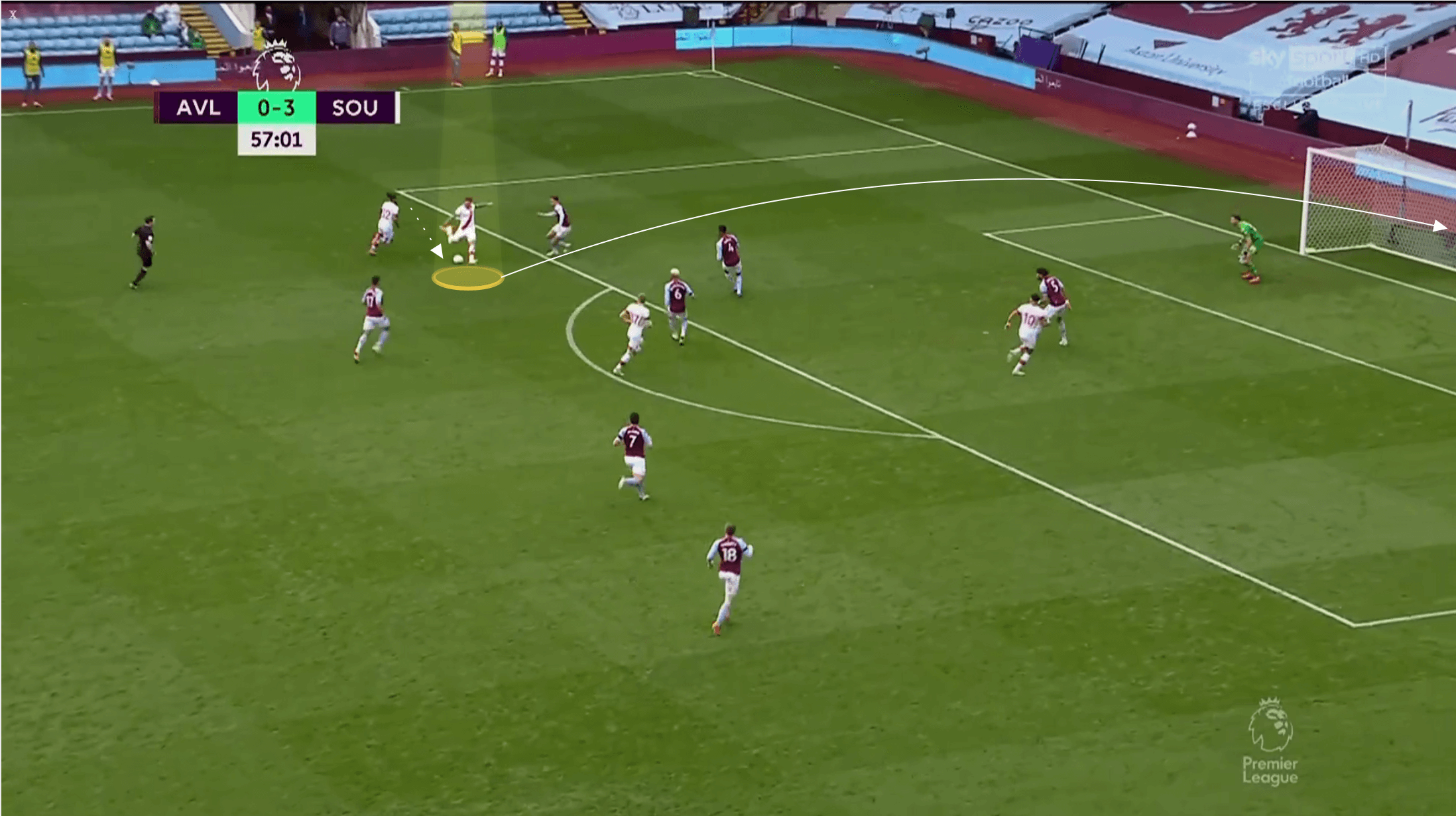 Ings is a threat from the right side, but not in this way. Instead from the right side, he prefers to take the ball to a fine angle, where he still shows quality technique to find the far corner with accuracy once more. These shots generally come from in line with the six-yard box to a few yards wider, but Ings isn’t taking shots from outside or even close to the edge of the box. Nevertheless, this is a difficult angle that he is confident shooting from. Once again he opts for power, keeping these shots low. 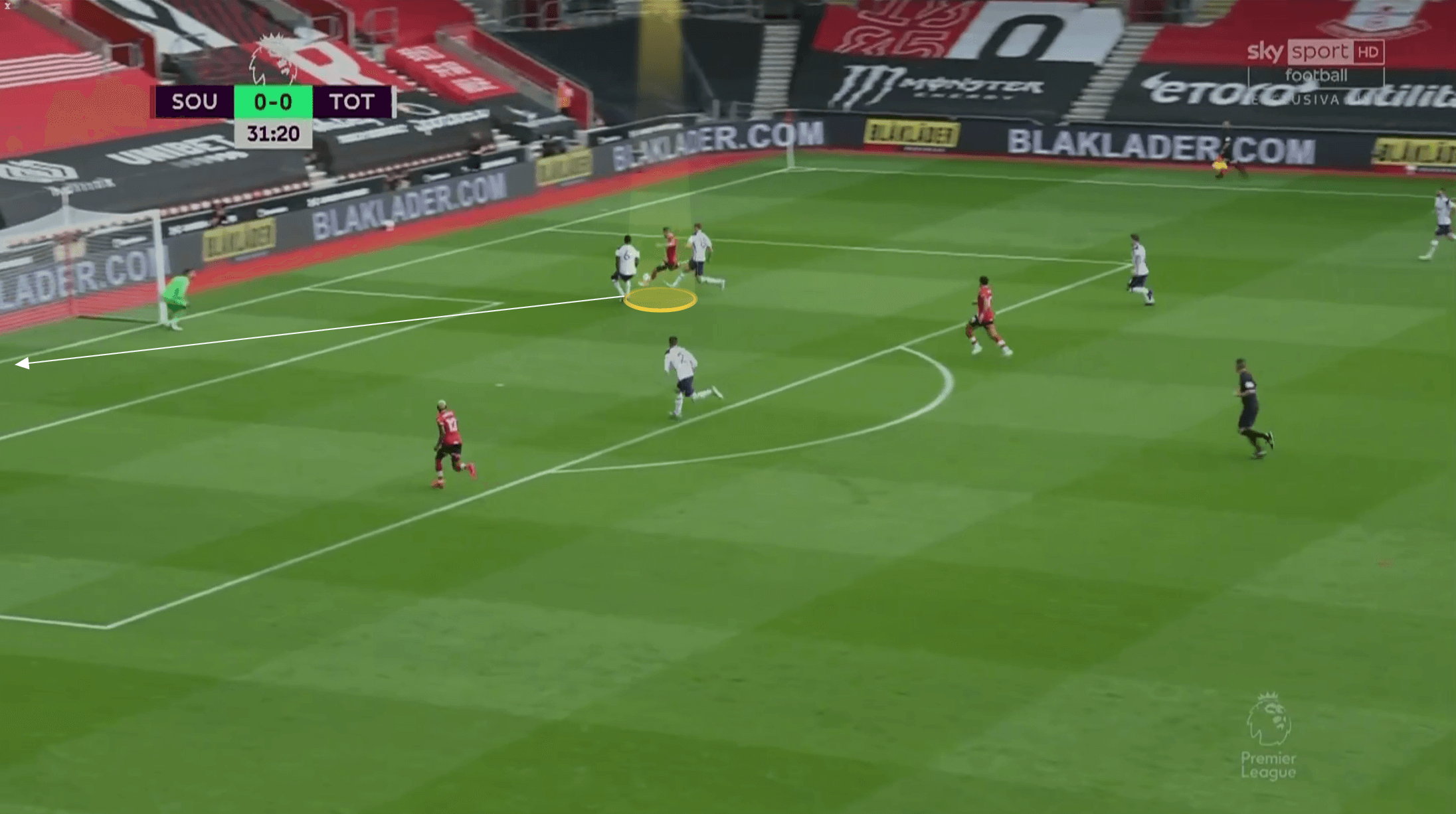 His final tendency comes in 1v1 opportunities against the goalkeeper. Ings shows immense composure in these moments. He has a change of pace as we know and can make a late adjustment to round the keeper with a dribble if there is space. But what he frequently does is keep an upright body position, and uses a low back lift to allow a quick release of the shot, and prevent the keeper from being able to time their dive. He slots the ball effortlessly underneath the keeper or to the side of them, not necessarily looking for any kind of power, but using accurate placement and this quick timing of the shot to score. It’s an effective approach that makes him highly potent in these situations. 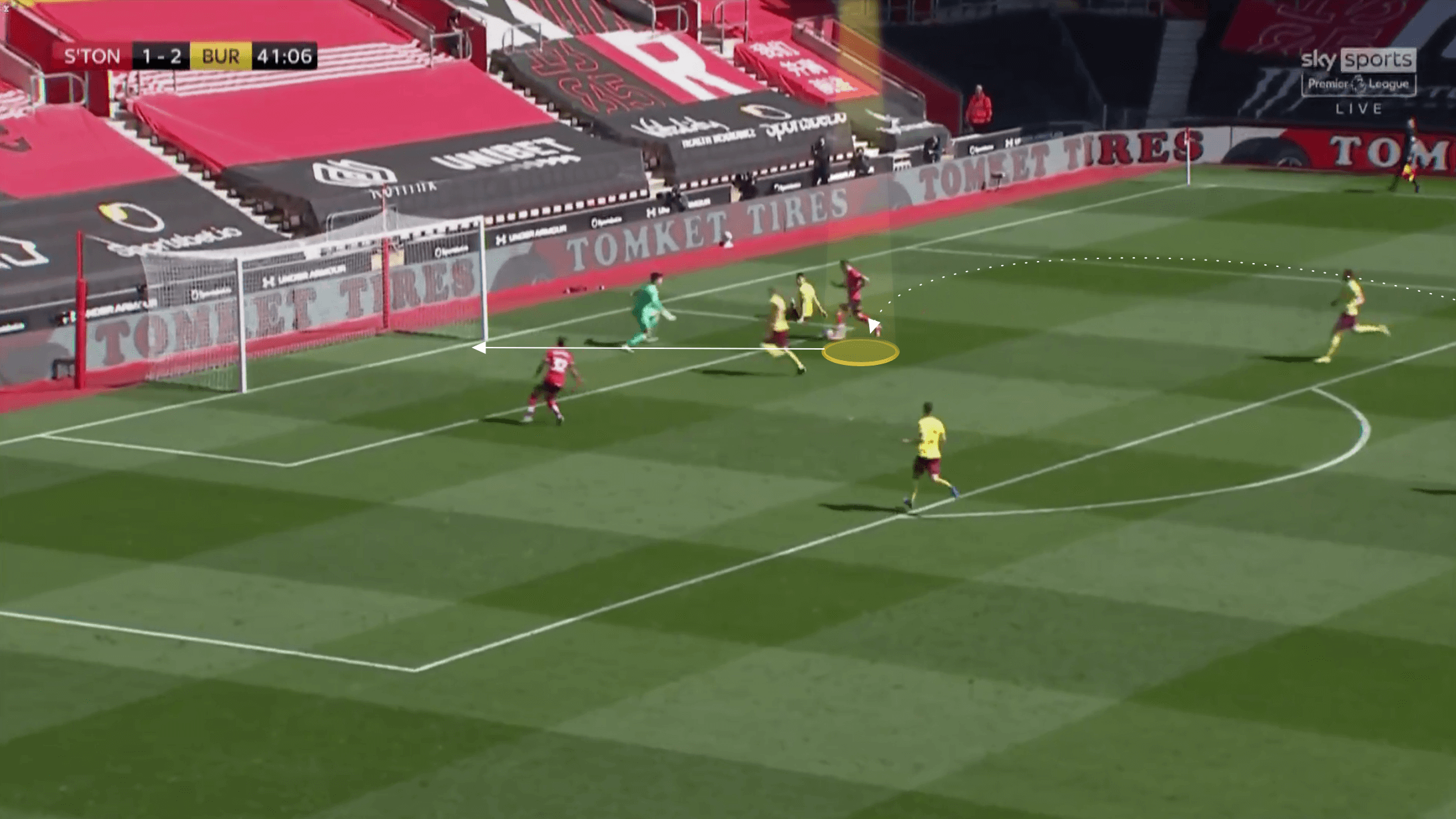 Signing Ings is an astute piece of business from Villa. Obviously, he is already well accustomed to the demands of the Premier League and has thrived already in a side who played with a similar system to Villa. At 29 years of age, Ings is in the peak years of his career. Having scored double digits in his last two seasons, and with two goals already to his name in this campaign, Villa fans will be confident Ings can repeat these feats for them in their front line.