Germany has a fullback problem. Maybe a young left-back from VfL Wolfsburg named Gian-Luca Itter can solve it.

After a devastating performance at the World Cup, 2018 in Russia Germany and especially the DFB are in a major crisis. They now check everything. Joachim Löw has the trust of the national football association and the clubs, however, he will be under heavy observation.

The main criticisms are that Löw relays too much on older players with whom he succeeded in recent years. But it seems like the generation of Hummels, Özil, Boateng and co are on their way downwards. A lot of those players will continue to play for Germany, however, it is time to look at some young promising German talents who could sooner or later be part of the first team.

With players like Joshua Kimmich, Julian Brandt and Leroy Sané Germany already have young but experienced players who constantly perform on the highest level for Europe’s major clubs. But there is a new generation of players who work hard to get their chance in the national team. Players like Kai Havertz, Jann-Fiete Arp or Gian-Luca Itter all play more or less regularly for their first teams and are the biggest prospects in Germany.

Born in Gießen his talent was quickly visible. As a result, he joined Eintracht Frankfurt´s Academy in 2011 along with his twin brother Davide-Jerome. Both played for Frankfurt until 2015. Usually, Gian-Luca played as a left back while his brother is more comfortable on the right side. After they moved to Wolfsburg in 2015 they constantly developed and could easily be considered as two of the best prospects in their age.

Even at the youngest age, the twin-brothers were part of Germany´s youth national teams. However, Gian-Luca seems to be the more talented player. Under Martin Schmidt, he had the possibility to make his Bundesliga debut last season. And his first appearance was probably the biggest challenge a young defender can face in the Bundesliga. Because he made his debut in the Allianz Arena and was responsible for defending Arjen Robben the whole evening. In the end, VfL Wolfsburg would leave Munich with one point, drawing 2-2 at Allianz Arena.

Since his debut at Allianz Arena, he made four more appearances for VfL Wolfsburg’s first team playing 414 minutes last season. Due to an injury, he couldn’t help Wolfsburg fight relegation in the last games of the 17/18 season. Now he is back from his injury and wants to regain his starting spot at VfL Wolfsburg. Due to his good performances and his potential, he signed a professional contract at VfL Wolfsburg until 2021.

The winner of the Fritz-Walter Medal can be considered an offensive fullback. Gian-Luca Itter is a dangerous left-back who can help his team due to his technical abilities and his pace. In his last season for the Under-19 team of Wolfsburg, he assisted on 10 goals in 22 games. Personally, his biggest role model is David Alaba.

The Austrian fullback is easily one of the best fullbacks in the world because he unites defensive skills with pure offensive weapons like dribblings or dangerous crosses. Gian-Luca Itter has clearly similar attributes but I wouldn´t compare him to David Alaba. The Austrian fullback is a more dynamic attacking fullback who can be a threat for opponents because of his shooting. Itter, on the other hand, plays more elegantly than Alaba. His touch of the ball looks less dynamic and he doesn´t concentrate on vertical or goal-oriented movement like Alaba.

Still, he shows glimpses of his great touch under pressure. When the opponent applies pressure he can secure the ball nicely or even dribble out of those situations. This scene illustrates his abilities. He anticipates the movement of the defender and just moves the ball around him in the open space.

Furthermore, the young defender has a variety of passes in his skill-set. In the modern era of football world-class players have to be comfortable with the ball no matter which position they play. In particular, the position of the fullback is the one which will develop in the next years. Pep Guardiola with his inverted fullbacks has already made the first steps towards a new definition of the position.

Itter similar to Joshua Kimmich can develop into one of those defenders who can give his team playmaking from the sideline. At Wolfsburg, he showed glimpses of good decision making and intelligent passing. 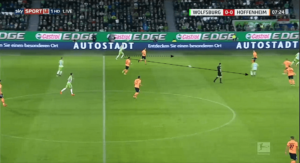 Here, he is comfortable enough to pass the ball to a player between the lines. One of his strengths is the fact that he adjusts his position quickly according to the situation and structure on the pitch. 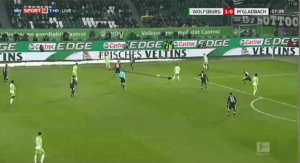 In another example, he dribbles on the left side and therefore draws the opponents towards him. This opens space and he quickly plays the pass in the space between the lines to one of his offensive players.

If you are not familiar with the Bundesliga you have to know that Wolfsburg was one of the worst teams last season. Their positioning in possession is far from elite. Consequently, it is hard for a young player to show his passing abilities when his team isn’t structured well enough.

Without solid crossing skills, Gian-Luca Itter couldn’t be a fullback in the German Bundesliga. So, logically his crosses are accurate regardless of which angle he hits the ball.

No matter if he hits crosses and the second post, the Six-Yard box or in the penalty area his great technical abilities allow him to be dangerous and effective all the time.

Defensively, Itter has to improve. With his natural talent, he can be a good defender. His speed, football IQ and physical abilities showed help him to win 1v1 duels or intercept passes. However, in his few Bundesliga appearances he didn´t always look that good defensively.

Lacking experience, Itter shows the normal mistakes a 19-year-old boy does when he first plays in the Bundesliga. Above I already mentioned that his first opponent was Arjen Robben. Against the Dutch winger, Itter performed well but still made some mistakes. Especially, in the second game of the season against Bayern Munich. 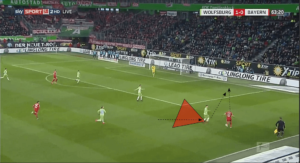 Here, for instance, he knew that Robben usually goes left from the right sideline to shoot with his strong foot. During that counter-attack, Itter was too late to get into position and only closed the way to the centre. Naturally, this behaviour is right, however, he offered Robben the way in direction of the goal heavily. Additionally, to his poor positioning, he attempted the tackle in the wrong moment and Robben beat him in that duel.

Especially, in the second leg, he didn’t perform at his normal level. Being responsible for a penalty and losing an important duel which led to the equalizer doesn’t look good. However, considering he is 19-years-old those mistakes are natural during a development process. 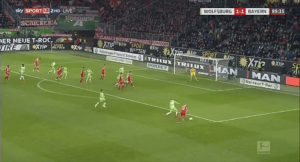 Again, bad timing and not the perfect position. In the end, he grabbed Robben on his left arm. As a consequence, the referee decided penalty.

Furthermore, he struggled to win defensive duels not only against Arjen Robben but also against worse players. With only 15% of defensive duels won, he didn´t belong to the best fullbacks in the league. Quite often he moved out of position to quickly and got easily beat by attackers because they could use his bad timing to destabilise Gian-Luca Itter.

However, he also showed positive signs. In some situations, he timed his movement out of position perfectly and was able to force the attacker away from the goal. Furthermore, intercepting passes wasn’t a problem for the young left-back. Improving in all defensive categories will be necessary for Gian-Luca Itter to verify the praise he receives. He definitely brings the necessary skills to evolve into a great fullback in the Bundesliga or the national team.

Gian-Luca Itter is one of the most promising talents in the Bundesliga. Hopefully, injuries won’t ruin his career. Last season he couldn’t participate in the last games because he suffered an injury. This season he started for VfL Wolfsburg´s second team. With Jerome Roussillon, Wolfsburg signed a left-back during the transfer window. For Itter it will be important to get playing time constantly at a high level. So, he either wins the duel against Roussillon which isn’t impossible or VfL Wolfsburg should think about a loan deal. All in all, Germany has a new prospect which could solve their left-back problem.