Phillipp Lahm was one of the greatest players in German history. With his retirement from the national team in 2014 and 2017 at Bayern Munich, he left a big hole on the right-back spot in both, the national team and Bayern Munich. One young player who normally plays as a central midfielder took his spot and is on his way to not only be the Lahm replacement but create his own “legacy”. Joshua Kimmich, the twenty-three years old player from Bayern Munich is one of those talents who came through after the 2014 World-Cup.

He received his football education at Stuttgart, together with Timo Werner. After that, he developed at Leipzig in the third and second German league and got transferred to Bayern Munich 2015. Many fans were surprised by this move especially because Bayern is known for ruin talents. But, Pep Guardiola was convinced of Kimmich’s qualities. In the first season, Kimmich received playing time as a central midfielder. However, in a midfield with Alonso, Vidal, Thiago etc. it was hard for him to play regularly. Because of his high football IQ, Kimmich played multiple positions in that season. Even in one game, Guardiola changed Kimmich positions multiple times. After Bayern missed almost all central defenders, the young German from Rottweil was supposed to defend in the centre. Against Juventus Turin, David Alaba and Kimmich was the centre back duo in Bayern´s victory over the “Old Lady”.

His good performances earned him a spot in Germany’s squad for the European Championship in France where Kimmich started as a right back for the Löw team. The right-back position is the one where he has remained since. After Lahm´s retirement, he became the new starting right back for Bayern Munich and played a strong season. There is no doubt that Kimmich will start at the right side for Joachim Löw. He will be the future for club and country. His goal is to become captain one day if he keeps improving like that this goal won’t be unreachable.

The midfielder at the right back position

With Pep Guardiola´s revolution of the inverted fullbacks the position is under observation. In recent years the tasks for fullbacks were really simple, defend well and give width in possession. Ideally, the fullbacks could overload the wing and cross the ball nicely. Still, the fullback position is one of the last ones where playmaking isn’t that important. The requirements of the position make it so difficult to add playmaking and passing ability to that. Only a few players like Marcelo or Philipp Lahm unite physical strengths and technical abilities. You can count Kimmich in the same category.

Naturally, he possesses all the technical attributes of a central midfielder, his acceleration and speed allow him to fill the fullback position. Especially, his passing ability lead to all kind of attacking options for his team once the ball travelled to the right wing. One possibility is the classic wing attack where Kimmich makes an overlapping run while for instance, Robben dribbles with the ball towards the centre.

However, a diagonal attack starting from the right wing is also possible because Kimmich is able to play accurate passes under pressure in the half-space. With Thomas Müller playing on the right wing this happens quite often because Müller tends to move in the centre. 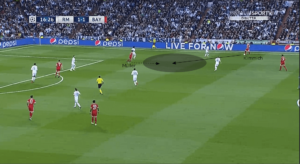 Here, for instance, Kimmich tries to create something from a deeper position. The appearing whole behind Reals midfield is due to Kimmich’s deeper position and Müller who pushed the defence to the back. Kimmich realizes that Müller is moving in that space and is able to pass the ball diagonally to Müller. Most importantly is Kimmich’s accuracy, the ball is passed in the right spot, towards the centre away from Marcelo. This allows Müller to turn immediately which helps Bayern to continue the attack. 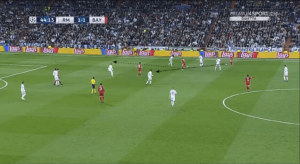 Another perfect example of splitting to defenders with a pass and finding Müller between the lines. Two fundamental principles of the positional play. Especially, the manipulation of the opponent through body positioning is one thing Kimmich is good at. Here, he first indicates a pass down the line to James which depositions Asensio and opens the passing line to Müller. 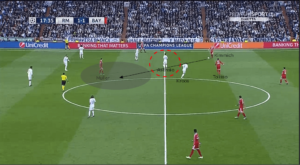 Kimmich’s great vision is visible here. In order to build-up from behind Bayern needs to break the lines. Consequently, they would push Madrid in their half and create space to play a switch-pass. The position of Asensio is crucial. Kroos moves towards Tolisso to deny the easy pass. As a consequence, the passing line to Müller opens. Kimmich recognizes that Asensio moves towards the left side. Therefore, he plays the pass to Müller. Again, he doesn’t pass the ball directly to Müller rather to his right foot. The pass indicates that Müller should aim to pass the ball to Bayern’s left side because there is space.

The perfect played passes from a strategical standpoint set Kimmich ahead of other right-backs. Furthermore, his constant scanning of the pitch along with his fast information processing leads to an advantage over other players.

As I mentioned, Kimmich unites the classic attributes of a fullback and those of a midfielder. Over the course of the season, Kimmich improves in terms of doing overlapping runs and cross the ball in. Probably because he played for the first time over a longer stretch at the fullback position. 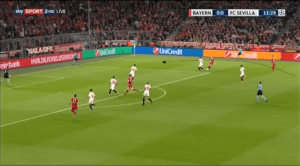 The speed and timing with which Kimmich runs from deep are impressive. His physical strength makes it possible for him to go past a defender if necessary. With Robben on the right side, Kimmich received surprisingly a lot of space which he uses perfectly.

His crosses are accurate, with 18 assists he belongs to the most important options for Bayern’s offence to create goal scoring opportunities by using crosses.

Kimmich’s vision and information processing help him to find the open player and the perfect cross in those chaotic and fast-changing situations on the wing. 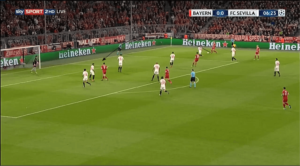 The variety of crosses Kimmich has in his arsenal pose problems for every defence. For the german national-player nor high crosses on the striker’s head or in the space in front of the goalkeeper, neither flat crosses in the back of the defence are a problem. Bayern´s only goal in the DFB-Cup finale was assisted by Kimmich via a flat cross to the trailing Lewandowski.

His off-ball movements are important in the offensive game of Bayern and the German national team. His overlapping runs we observed above are only one part. His movement without the ball is intelligent and shows his central midfield background.

His understanding of the structure is visible in that situation. Müller stays on the right side with the ball on his foot, Bayern’s structure provides no immediate passing option, therefore, Kimmich makes a run which opens the marked space for Müller due to Gladbach’s defenders following the right back. 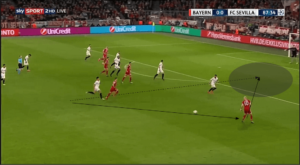 Furthermore, Kimmich feels pretty comfortable in the centre. His halfspace run in that situation is hard to defend for Sevilla. The fullback can’t move to Robben without giving Kimmich too much space. Due to that positional superiority, the defender can’t defend the situation properly and Kimmich receives the ball in the box.

For Joshua Kimmich the sky is the limit. His extremely high football IQ along with his technical and physical gifts make him a complete player who can contribute to the success of a team from more or less every position. His ideal position is probably still the central midfield where he has a higher influence of the game. He could fill the position Xabi Alonso left at Bayern right in front of the back-four. From that position Kimmich could control the game, his high pressing resistance would help him to build-up the attack even under pressure.

The only problem, he is so good at the fullback position, which is a difficult position because you need a variety of skills to be world-class. Kimmich has those skills that’s why coaches will put him on the right back spot in a back four. However, there is one option which would increase Kimmich’s influence in the middle while still having him as a right back. The inverted fullback Pep Guardiola installed at Bayern and Manchester City could be a suitable role for him. 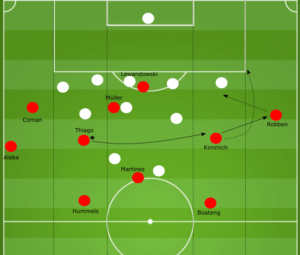 Under Jupp Heynckes he sometimes positioned in the half-space. From there, movements without the ball like we saw above were extremely dangerous. Furthermore, he could connect Bayern’s players and serve as another passing option. Also, during the build-up phase, he would create an overload in the centre and Bayern would have another pressing resistance player in the centre. For Joachim Löw this will probably be no option because his right wingers naturally move into the centre. Therefore, the youngster from Rottweil has to positioned wide in order to create space.

Joshua Kimmich will be one of the important parts of that German squad. He is part of the next generation, the generation after Müller, Neuer, Hummels etc. With twenty-three years old he combines all skills that are needed to be a world-class full-back. In the whole article, I didn’t mention his defensive attributes. In those areas, Kimmich has the highest potential to evolve. Clearly, based on his high footballing IQ he positioned pretty well. 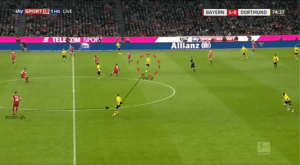 He can intercept attacking plays because he understands the game and knows how the opposing team will continue the attack. In terms of 1v1 and defending of through-balls/long balls he can improve. If he progresses like the last few years he will become one of the best players in the world, as a right-back or central midfielder. 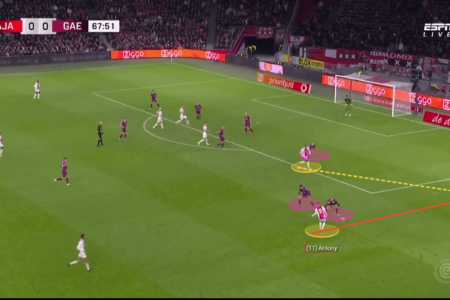 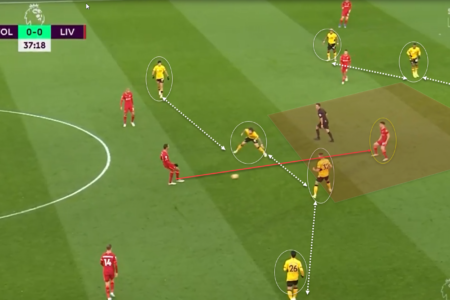