Olivier Giroud has been one of the most impressive strikers during this FIFA World Cup 2022 as he has contributed hugely in making France reach the final and perhaps lift the trophy, but we’ll discover that tomorrow.

Giroud is a 36-year-old forward who has had numerous different experiences at multiple clubs, beginning his career at Grenoble while having some a loan spell at Istres before moving to Tours, and then Montpellier prior to making a big move to Premier League’s Arsenal in 2012. It was his first big step towards becoming a renowned and a reliable striker for some of the top European clubs. He won The FA Cup with them in 2013-2014, 2014-2015 and 2016-2017 as well as the FA Community Shield in 2014, 2015 and 2017 and then he moved to Chelsea in 2018 to continue his English journey in the best of ways by lifting the UEFA Europa League trophy with the Blues in the 2018–2019 season.

He then ended his Chelsea adventure on a high note by winning the 2021 UEFA Champions League after beating Manchester City in the final.

Giroud’s next move was towards the Italian Serie A and more precisely to Milan, the team with which he lifted the Scudetto last season and was one of the biggest contributors to winning it. Milan fans will always remember his crucial derby goals which represented the turnaround of the course of the Scudetto from Inter to Milan. Moreover, Giroud has already been essential for Milan during the current season especially when considering the long absence of Zlatan Ibrahimović and the fact that head coach Stefano Pioli is relying on Giroud as the starting striker of the team.

But in this tactical analysis in the form of a scout report, we will be focusing mainly on Giroud’s role and performances with the French national team during the 2022 FIFA World Cup. It will also be an analysis of how his finishing and playmaking skills and abilities were fundamental for France’s tactics and for being able to pass the group stage and all the knockout games prior to the final.

Player profile and role with France

As the following graphic shows, Giroud has got some of the best statistics in the world in terms of goal contribution per match, which surpasses his expected goal contribution per match. More importantly, Giroud seems to be unbeatable in the air as he wins 96.4% of aerial duels and knows how to direct his headers accurately towards his teammates who come from behind.  Giroud’s height and physical strength help him a lot in being efficient and powerful in terms of aerial duels and duels in general.

Nevertheless, it is not only a matter of physical strength but also of technique, accuracy and vision. Giroud rarely provides inaccurate passes using headers and this represents a huge advantage for Milan and France and makes the team rely on him most of the time when using long passes. And the secret for being so accurate with headers is his ability to scan his surroundings continuously before jumping or moving towards the ball. Being extra solid and aggressive during these duels and especially inside the box allows Giroud to be more dangerous and more clinical in front of goal even when being marked, since he knows how to get rid of marking at the adequate timing. 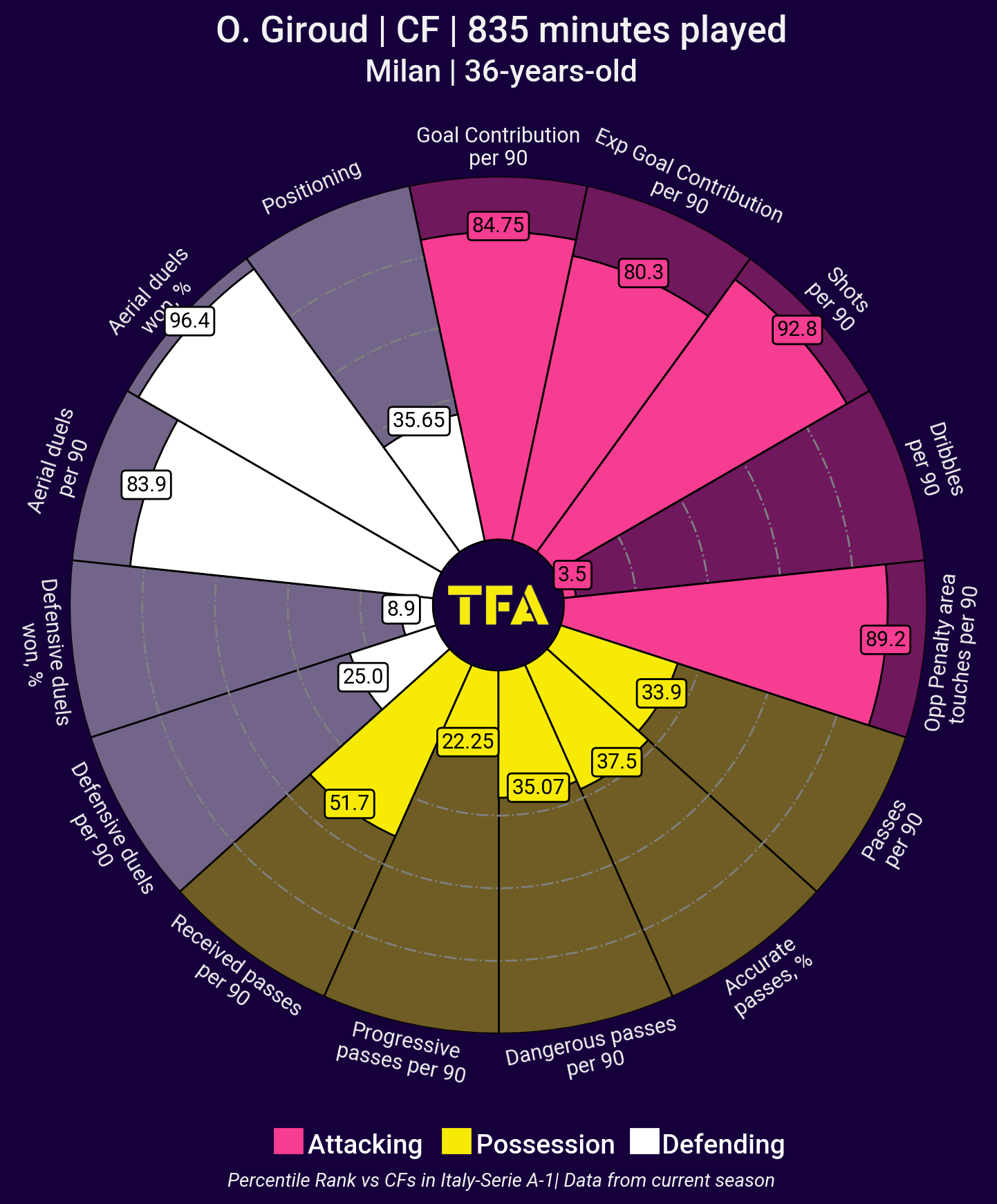 At France, Giroud can be considered as the main source of danger for the team as the players rely on him to finish the actions inside the box. Most of the time, he receives passes and crosses from both wings and mainly from Theo Hernández, Kylian Mbappé and Ousmane Dembélé as they know very well how to serve him and when to do so.

In terms of goalscoring, Giroud is known to be a classic striker who knows exactly how and when to move inside the box to get any pass going towards him. And with France, he has been fundamental during the World Cup in this regard, scoring four crucial goals in the different games he played.

Moreover, being able to jump this high and have the reflexes to react quickly to a high cross while attempting a bycle kick highlights Giroud’s new rejuvenation and how dangerous he can be inside the box. It is true that this attempt didn’t go in, yet it was one of the best plays of the tournament so far. 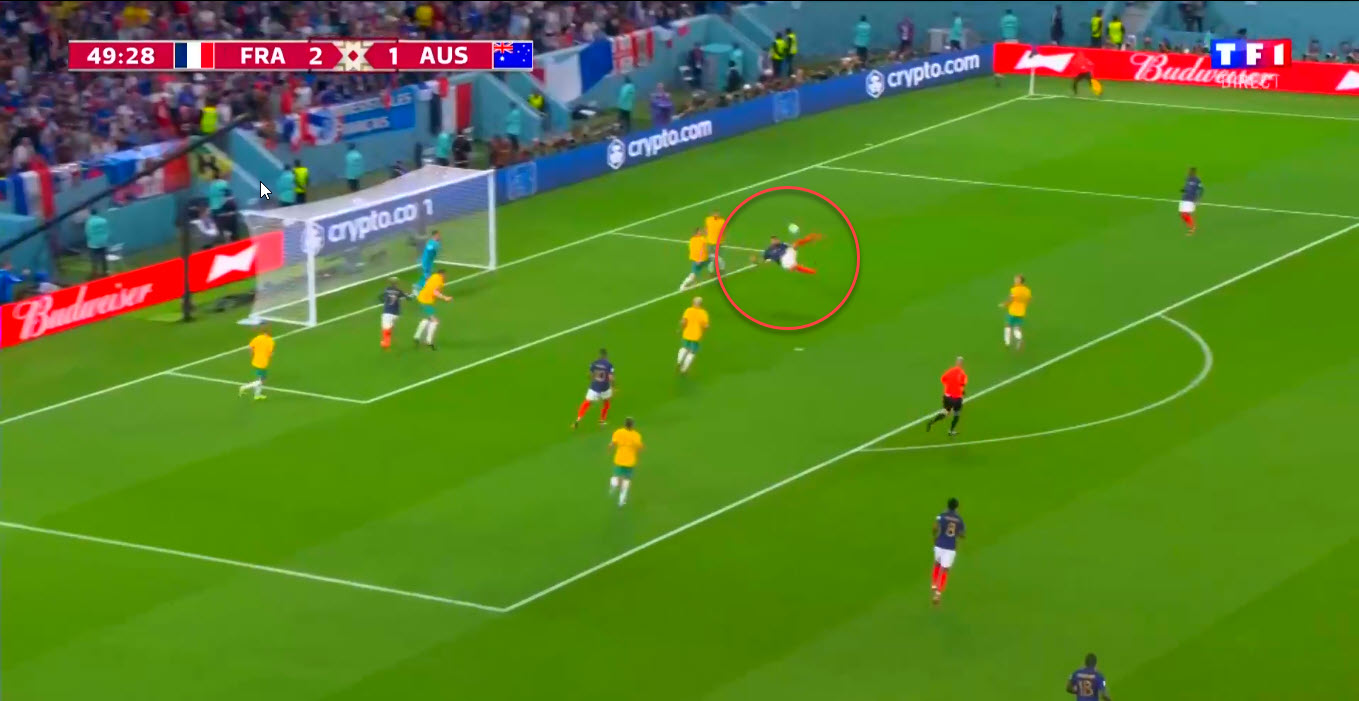 Despite being always marked by one or two defenders, Giroud always finds the right time and place to put an impact on the ball and score goals by surprising goalkeepers with powerful headers such as what happened in the following example against England.

Giroud’s chemistry with a player like Hernandez also helped the whole team be more dangerous upfront since Hernandez knows exactly when and how he needs to serve Giroud. But on this occasion, the cross was made by Griezmann and Giroud jumped while being marked by two players and succeeded in hitting the ball despite looking in another direction, which highlights once again the player’s finishing abilities and techniques. 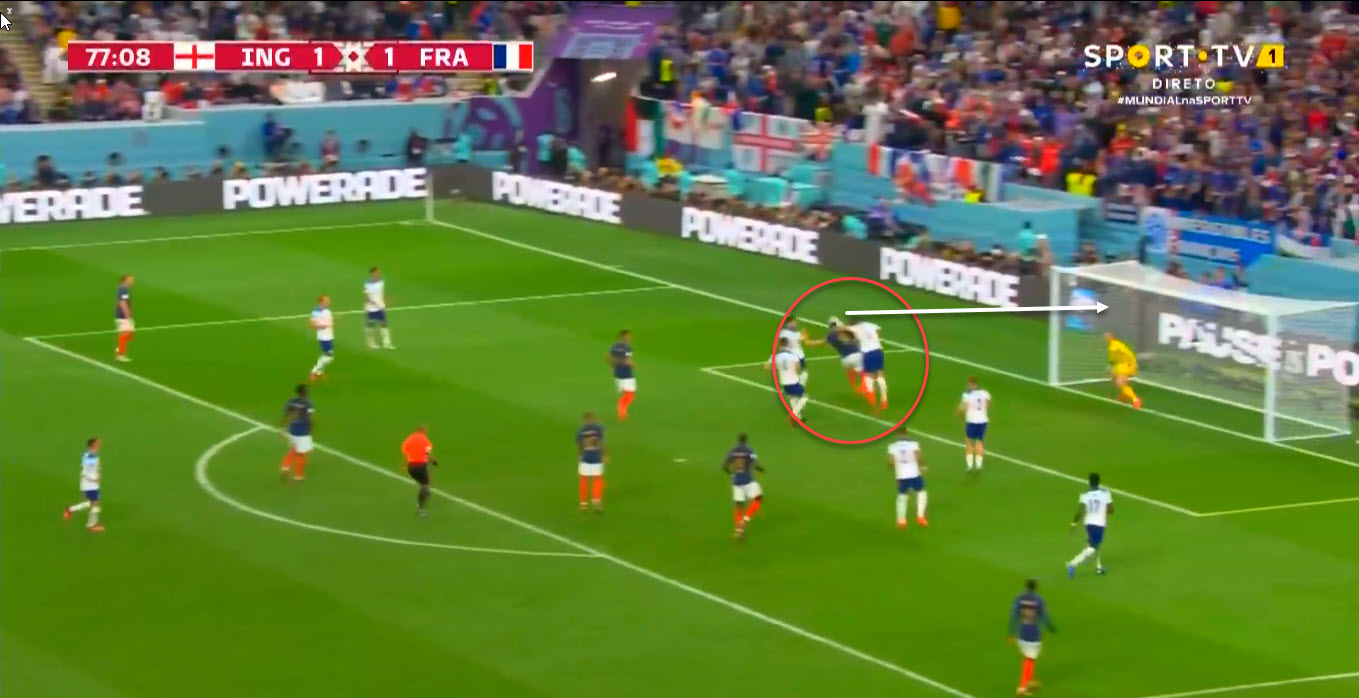 In addition, Giroud was crucial against Poland too when he scored his team’s first goal of the match with cold blood and mastery of his own abilities. Thanks to experience and talent, Giroud rarely looks stressed when in front of goal and usually deals with opportunities in the best possible way, and that’s what makes him one of the best strikers at the moment.

Against Poland, he received a pass from Mbappé and was able to shoot as soon as he touched the ball, without even looking at the goal before shooting. Still, the ball went in and this supports the fact that Giroud is usually aware of his surroundings and always scans the pitch before receiving the ball in order to react quicker than his markers. 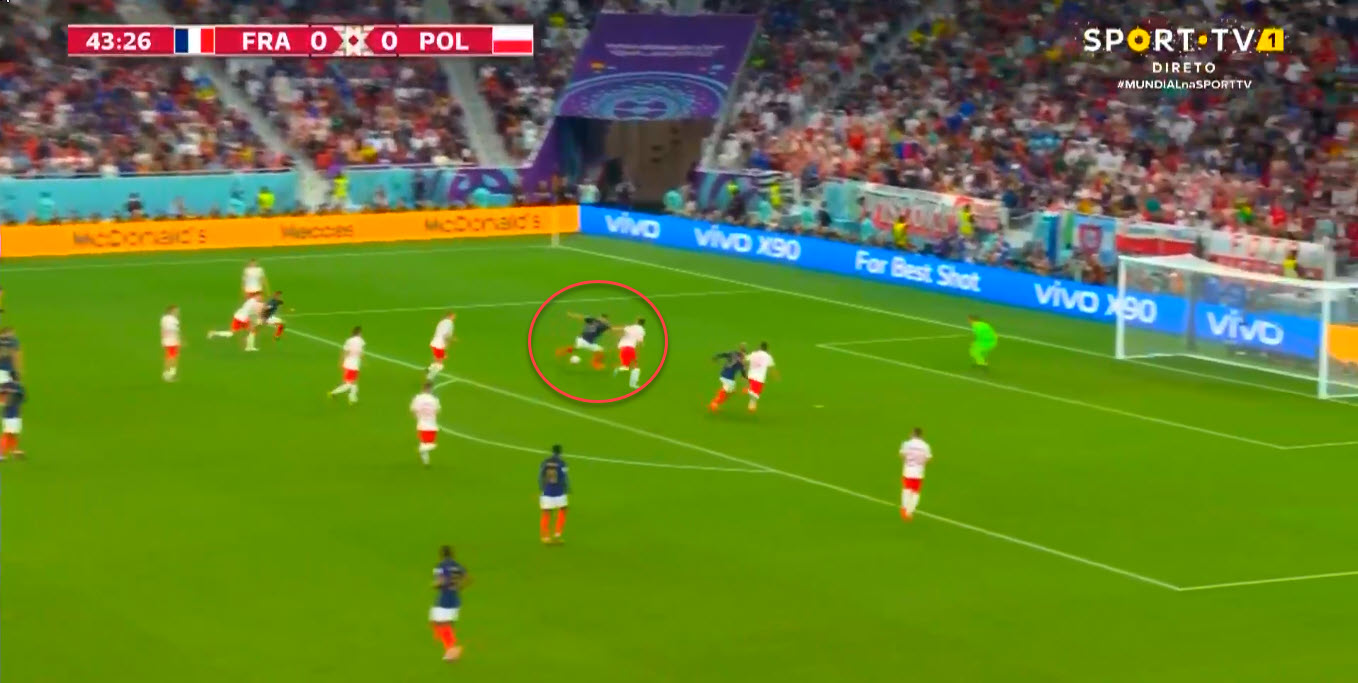 It could be strange for some people to know that Giroud is actually a very good playmaker, as they only know him as a finisher. However, it must be said that Giroud is one of the most intelligent strikers in terms of playmaking because he provides assists whenever possible and serves his teammates directly after winning aerial duels. Plus, and this is very important, Giroud is a team player and isn’t as egoistic as other strikers may be.

And this helps France and Milan a lot since they know that their striker doesn’t only want to score goals but also help by playmaking, providing assists and being active in the non-possession phase as well. In the following picture, you can see how Giroud uses his physical strength to protect the ball perfectly while having his back towards the goal. At the same time, he exploits the fact that the opposing defence is using a high defensive block and are pressing him by providing an excellent assist to Rafael Leão who found himself alone in front of goal. 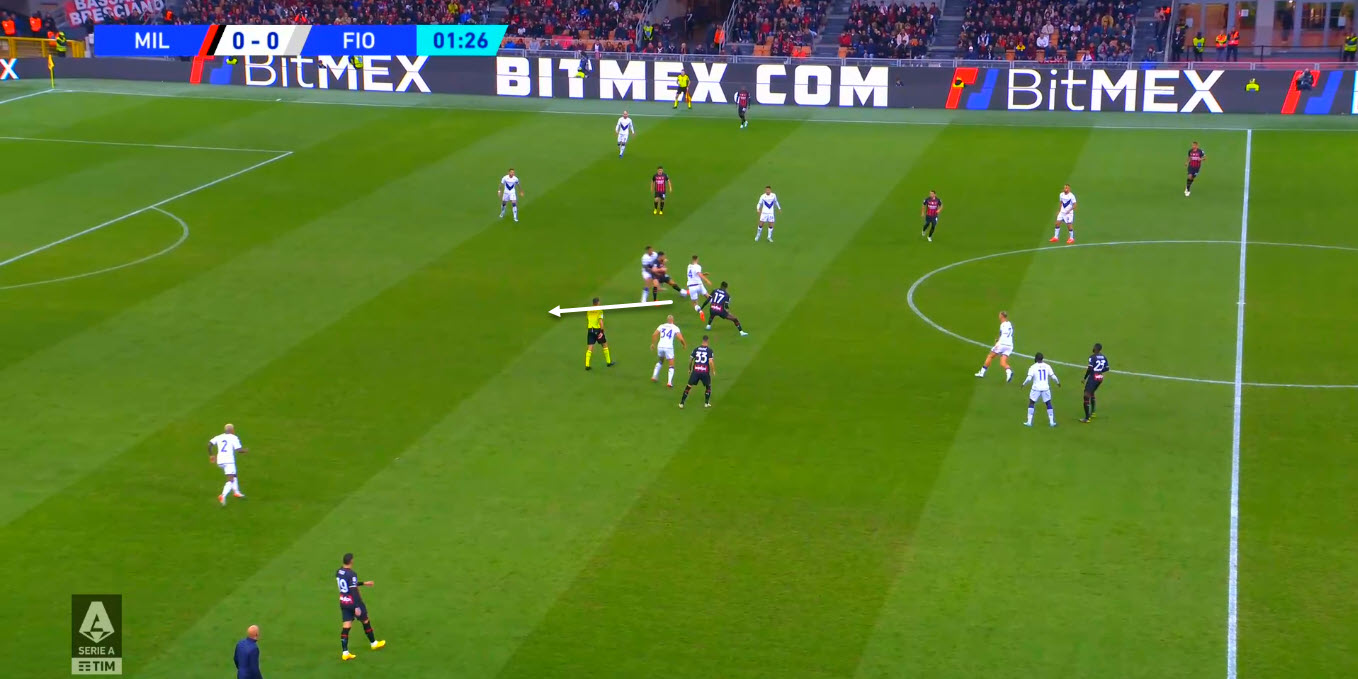 And apart from providing key passes like these, he also uses his headers to provide assists at times too and knows exactly when to go for a header towards goal and when to opt for passing to a better positioned teammate, and this is exactly why he is a team player. In the following example, he was able to confuse the opposing defensive line by pretending to shoot on goal while passing the ball to Rade Krunić who was better positioned during this action. 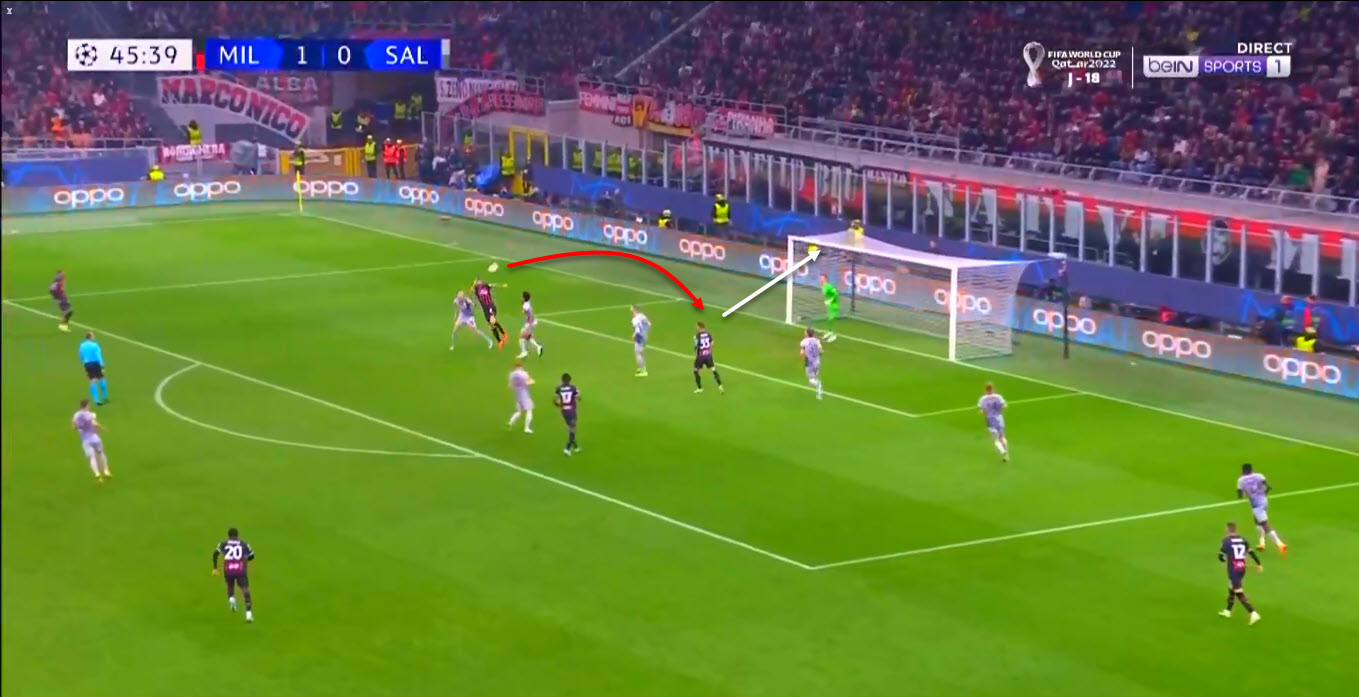 Olivier Giroud is one of the best actual strikers in the world and he has proved his abilities on numerous occasions and is always ready when France and Milan need him.

His challenge now is to keep putting on excellent performances despite his age and knowing how to lose less energy while remaining impactul on the pitch.

But overall, Giroud was one of France’s most dangerous weapons during this FIFA World Cup 2022 and could be the key for Les Bleus retaining their crown this Sunday.