Real Madrid have gone and done it again, against all the odds. They have virtually come back from the dead in not one, not two, but three second leg ties at the Santiago Bernabéu, their fortress, to reach their 17th Champions League final.

Against PSG, Camavinga came on for Kroos after 57 minutes with Madrid down 0-1. End result: Madrid win 3-1 and are through to the quarters.

Against Chelsea, Camavinga came on for Kroos once more in the 73rd minute with Madrid down 0-2. End result: Madrid lose 2-3, enough to advance to the semi-finals with the midfielder playing a role in both goals.

Against Manchester City, Camavinga came on for Modric in the 75th minute with Madrid down 0-1. End result: Madrid win 3-1 and will lock horns with Liverpool for a chance to lift a 14th Champions League trophy.

It is not that straightforward, of course, but the 19-year-old was a game-changer in all three games. Camavinga played 125 minutes, amassing 85 touches and 86% average pass accuracy, winning 9 ground duels and 7 tackles. He brings a different dimension to the Real Madrid midfield with his ball-carrying, passing range & ball-winning ability.

In this tactical analysis, we analyze the impact of Camavinga’s cameos off the bench in guiding Real Madrid to the Champions League final.

In the last 16 second leg tie vs PSG, Camavinga was excellent, bringing energy and legs to the midfield and enabling Madrid to turn the tide in a tough game. He played 37 minutes and completed 15 of his 16 passes. PSG had been in complete control since the first whistle blew at the Parc des Princes three weeks earlier. Camavinga came on for Kroos in the 57th minute. Four minutes later, Benzema scored to make it 2-1 on aggregate.

Camavinga was introduced as a pivot in Ancelotti’s 4-3-3 alongside Modric and Valverde. He displayed calmness on the ball, quality touches and the ability to turn away from opponents. But his main task was to stop PSG’s rhythm and prevent them from playing.

This was demonstrated in the build-up to Madrid’s quick-fire 2nd and 3rd goals in minutes 76 and 77.

Camavinga puts the pressure on Neymar on the right touchline. He was everywhere during the game, doing the running for the likes of Modric. 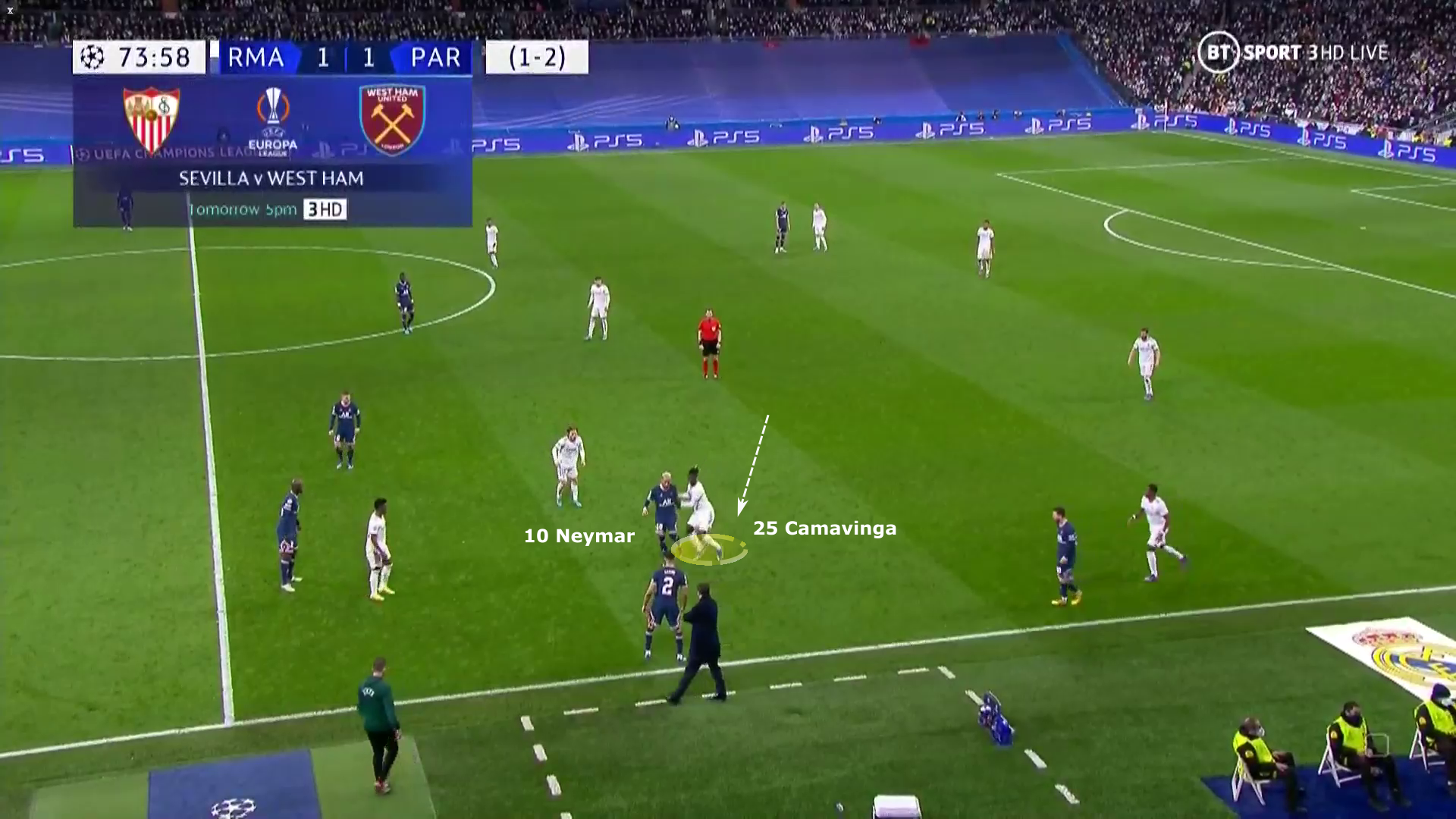 Neymar gets rid of it and plays the ball to Hakimi. Camavinga directly jumps on Hakimi’s toes and blocks the ball out for a throw-in. 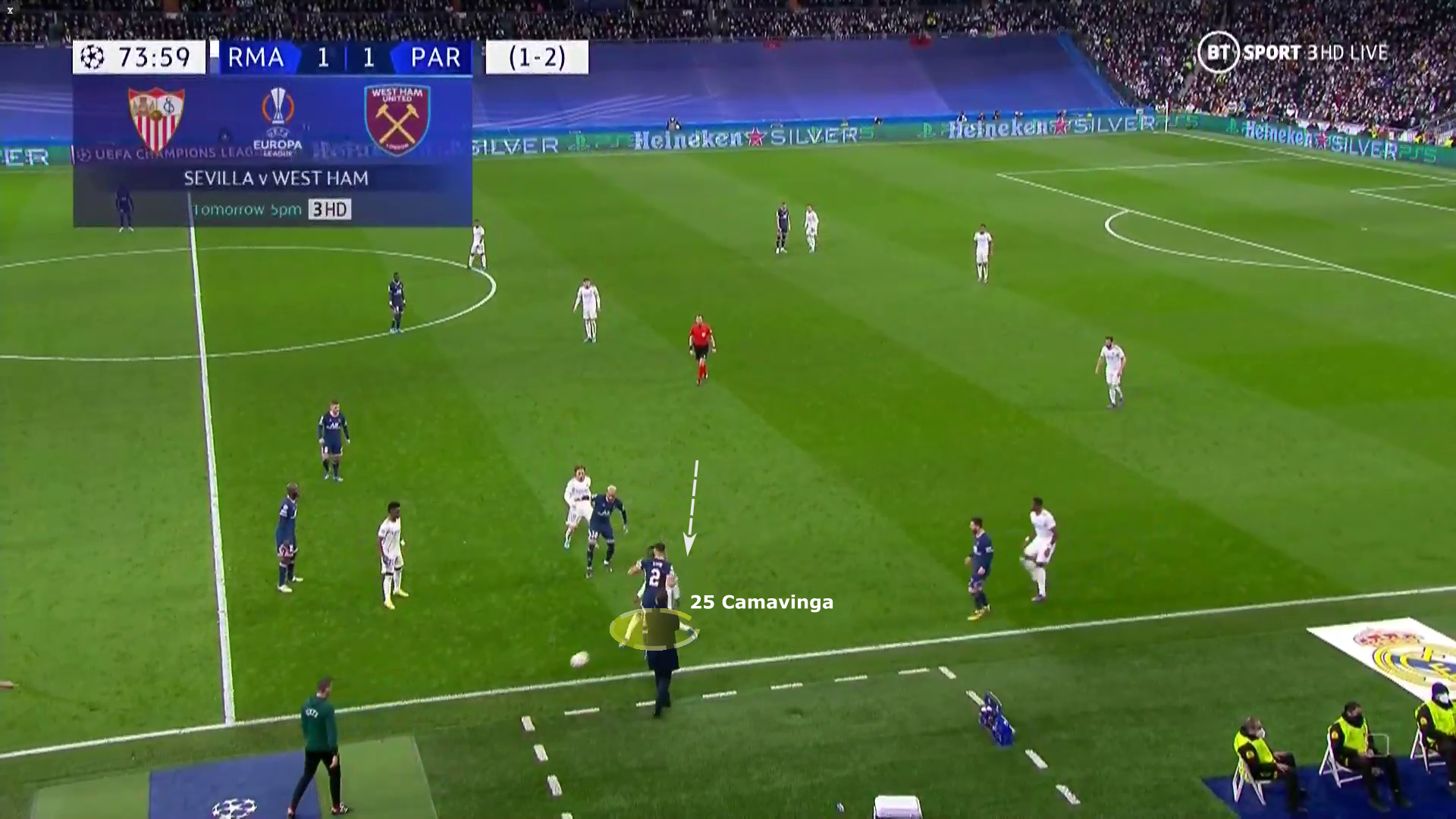 Neymar receives the ball after play resumes and Camavinga is all over him again making the challenge and Madrid end up winning back possession. He was constantly covering the wings to support the full-backs, relieving Vinicius and Rodrygo of their defensive duties as Madrid were pushing for goals. 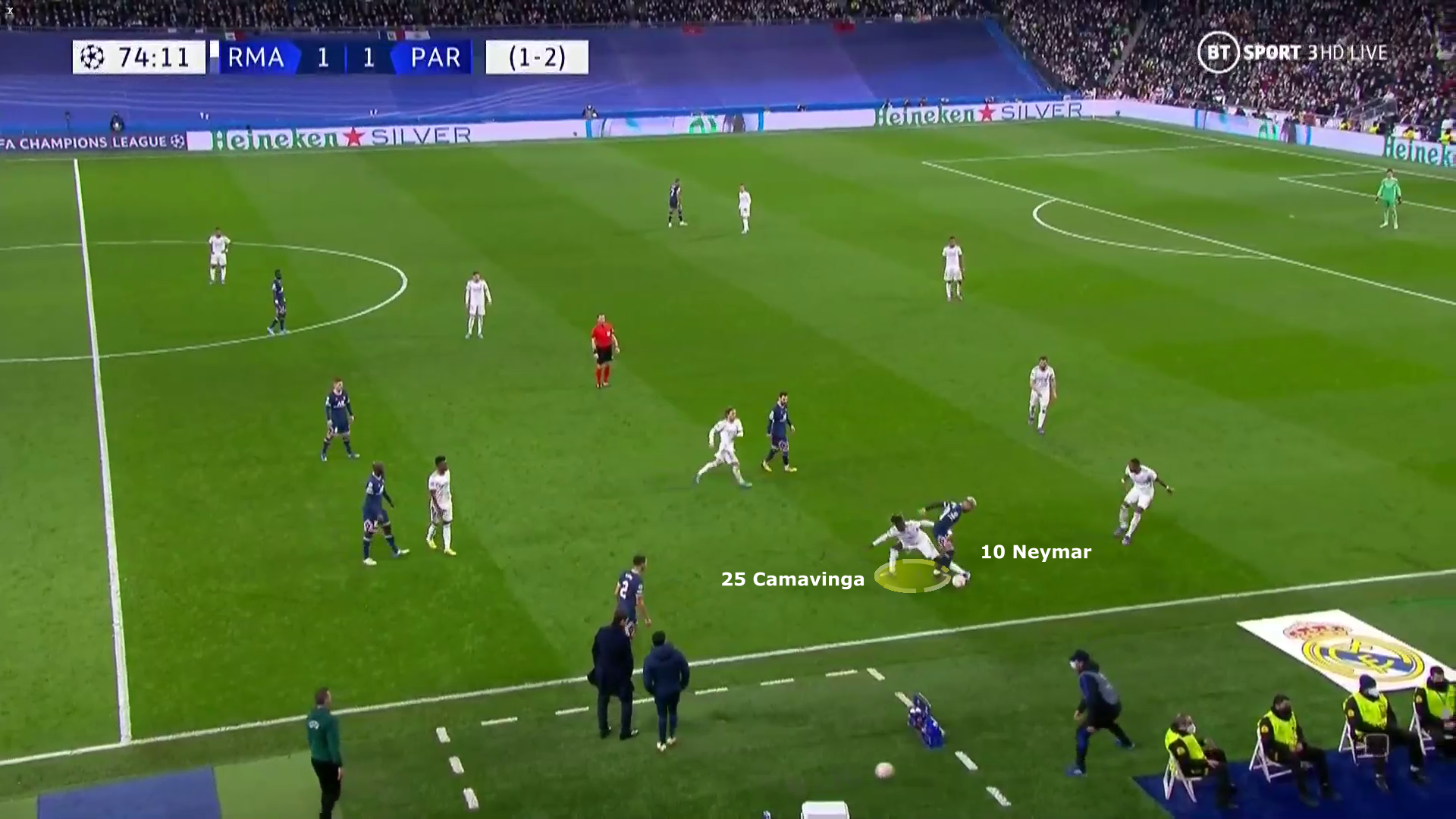 Around a minute later, Neymar is driving down the left wing and Camavinga is there to support Lucas, who came on at right-back for Carvajal. 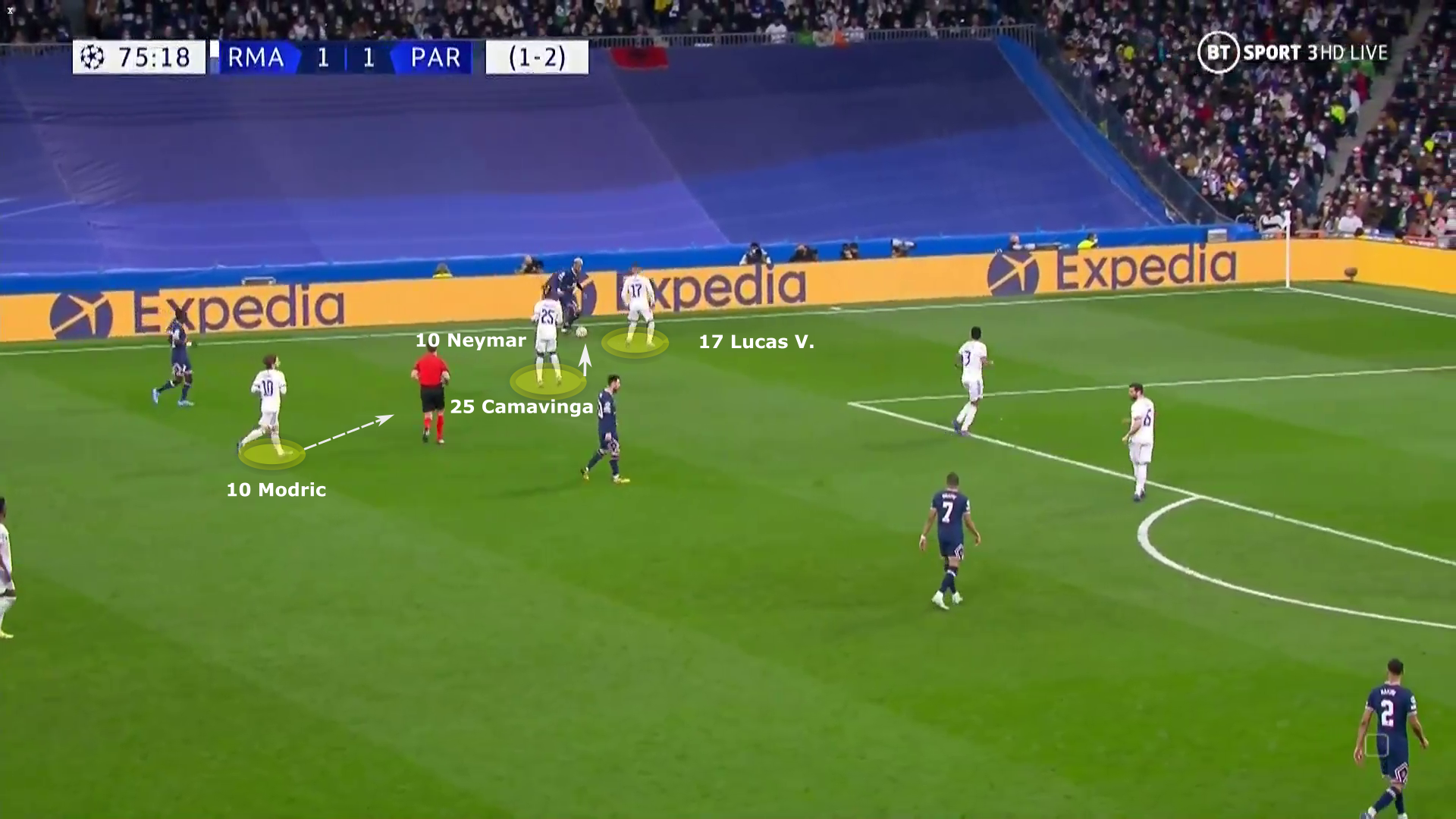 As Neymar makes a movement to cut inside, Camavinga and Modric instantly close down the passing lane to Messi. Modric intercepts the ball and pushes all the way to the other end, providing the assist for Benzema to make it 2-2 on aggregate. 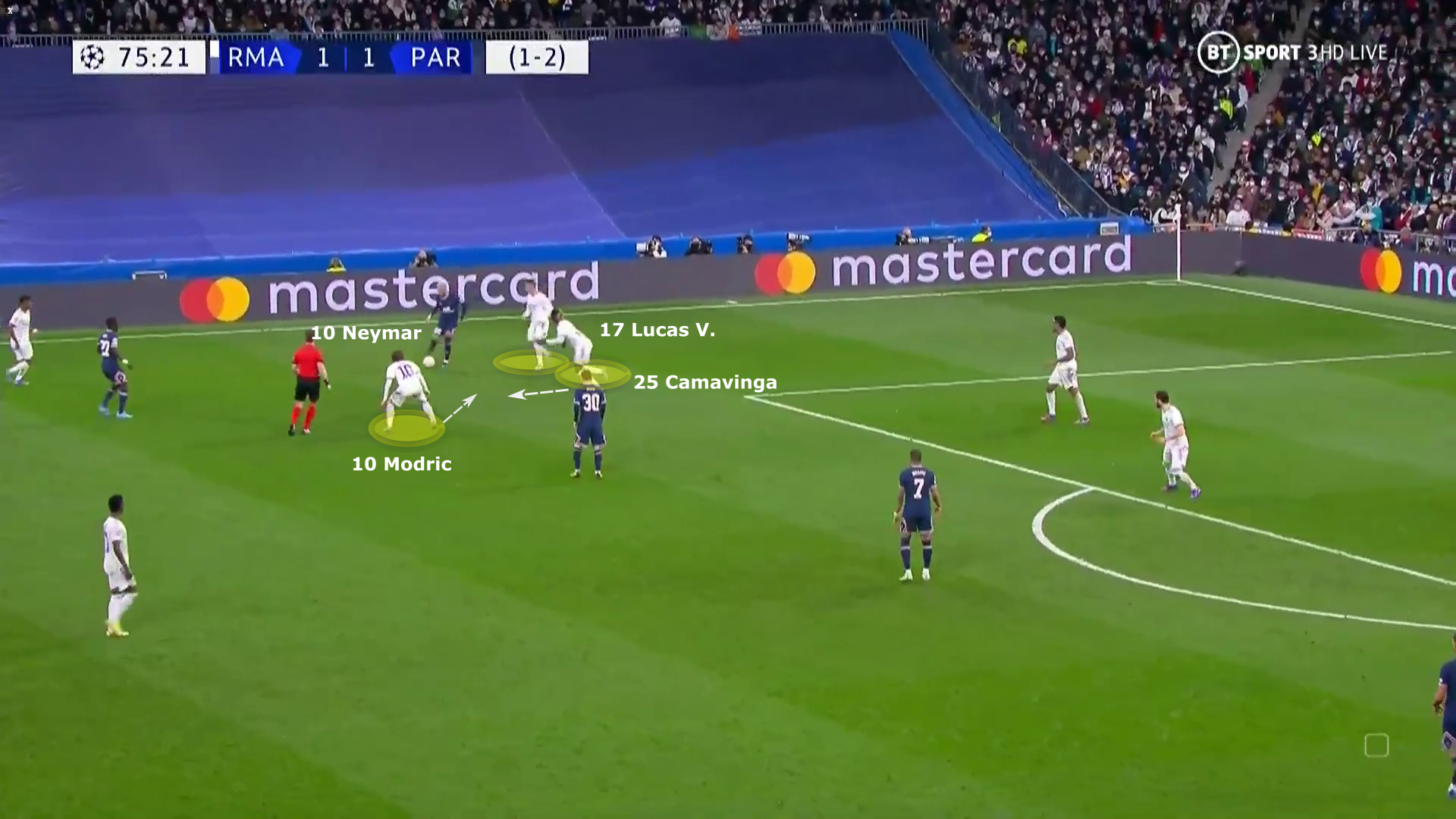 Los Blancos certainly would not have survived against Chelsea without Camavinga’s outstanding composure, infectious energy, and non-stop defensive effort in a difficult second leg at the Bernabéu. After their 3-1 defeat in London, Chelsea clawed their way back and were leading 3-0 on the night. Madridistas had been clamoring for club icon Toni Kroos to exit the pitch after a rough display. They have the utmost respect for Kroos, but they knew that this game, with its focus on defense and its need for someone who can provide more intensity, required Camavinga.

Similar to the PSG game, the Frenchman was introduced together with Rodrygo, and Valverde dropped back into midfield. Again, when there were opportunities to press, it was Camavinga who would jump out of the pivot position. The ball is played to Kovacic in the middle of the park and Camavinga is the one pressing and forcing the ball back to Rudiger. 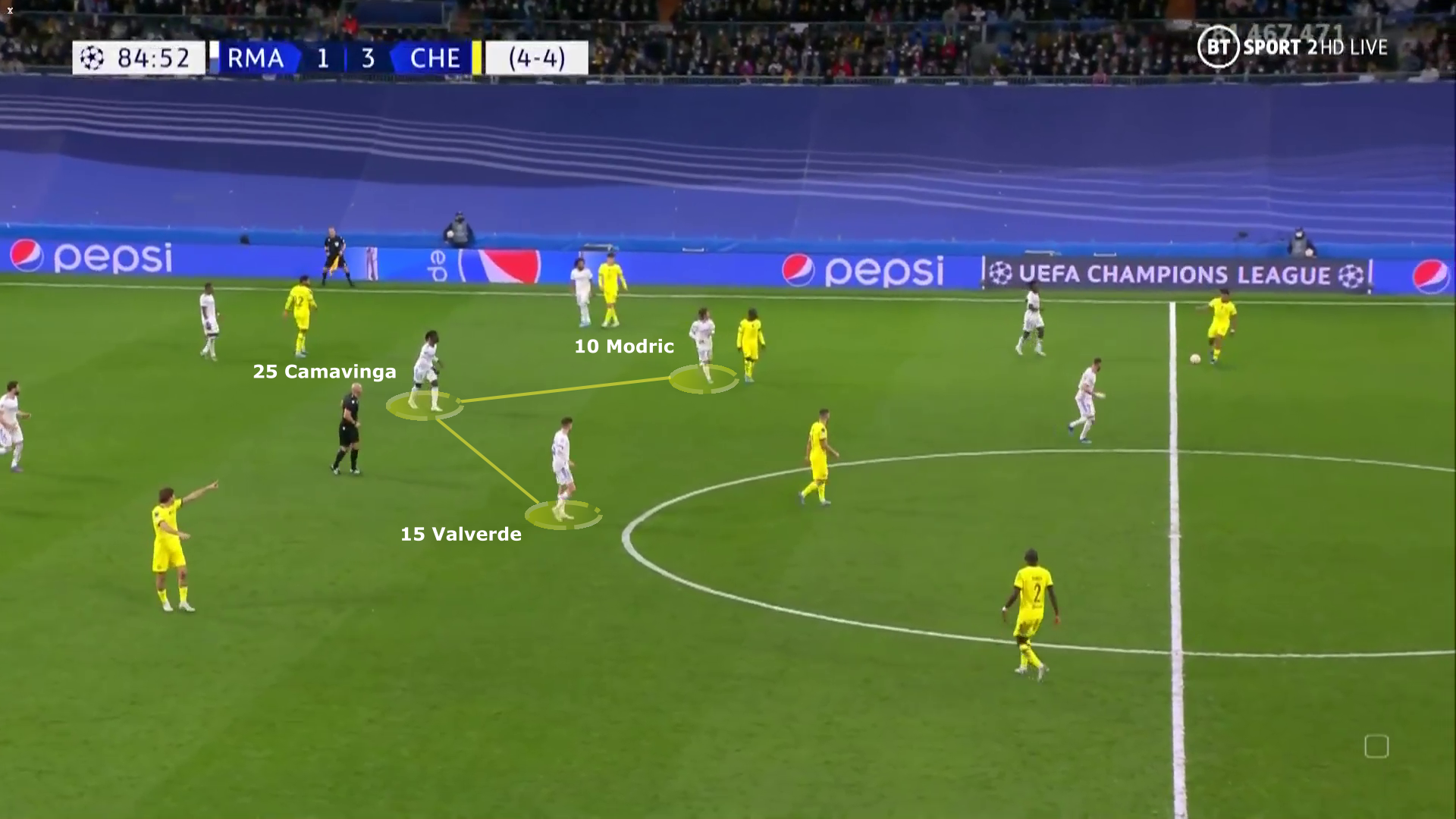 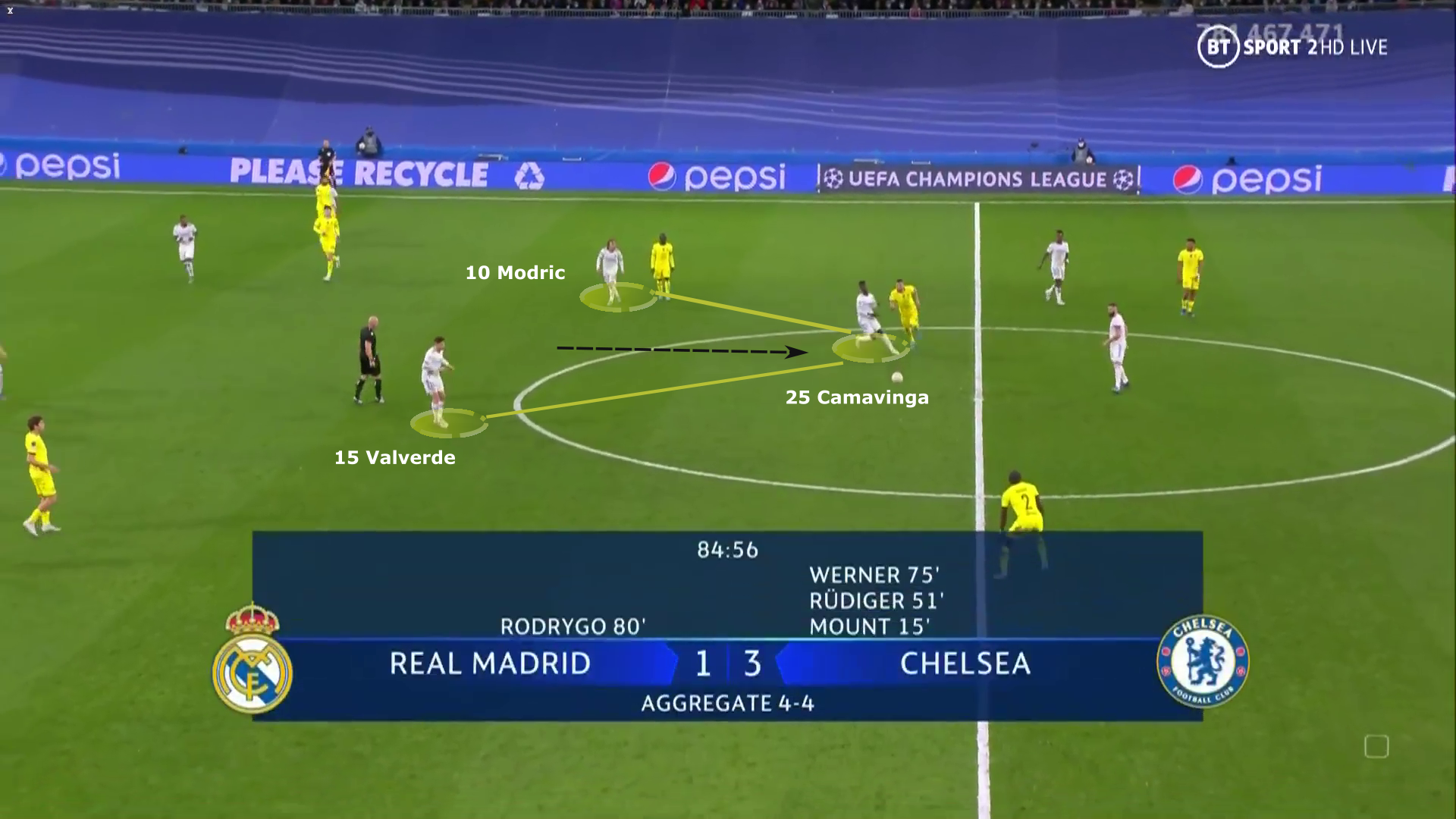 Leading 3-0 in the 80th minute, Chelsea win the ball back in their own half and Kante attempts to clear it away; with Camavinga chasing aggressively. 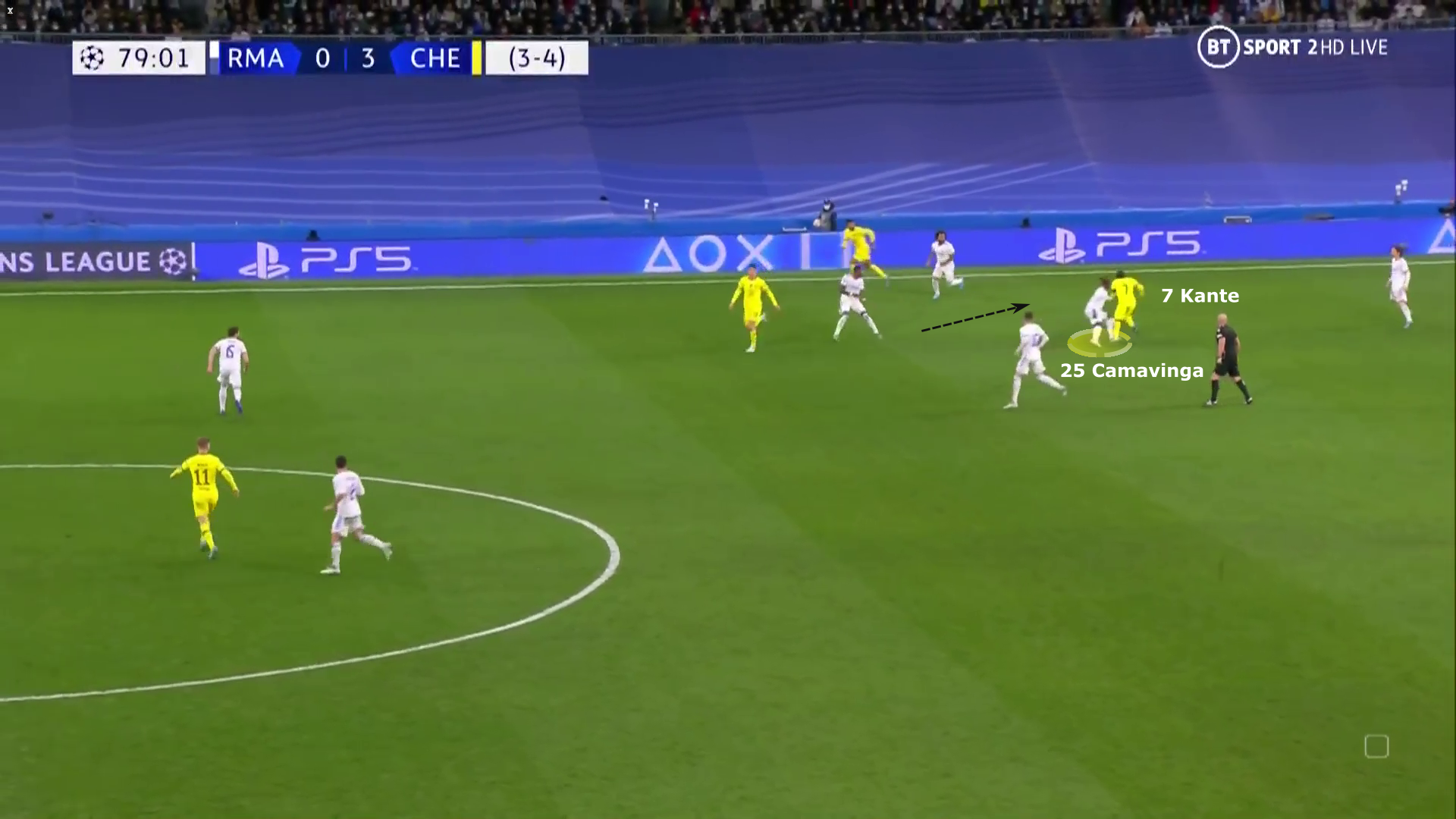 The intense pressure forces him into under-hitting his cross and Alaba blocks with his head. Modric gets on the ball and provides a majestic outside of the boot cross, the assist of the season, for Rodrygo to send the game into extra time. 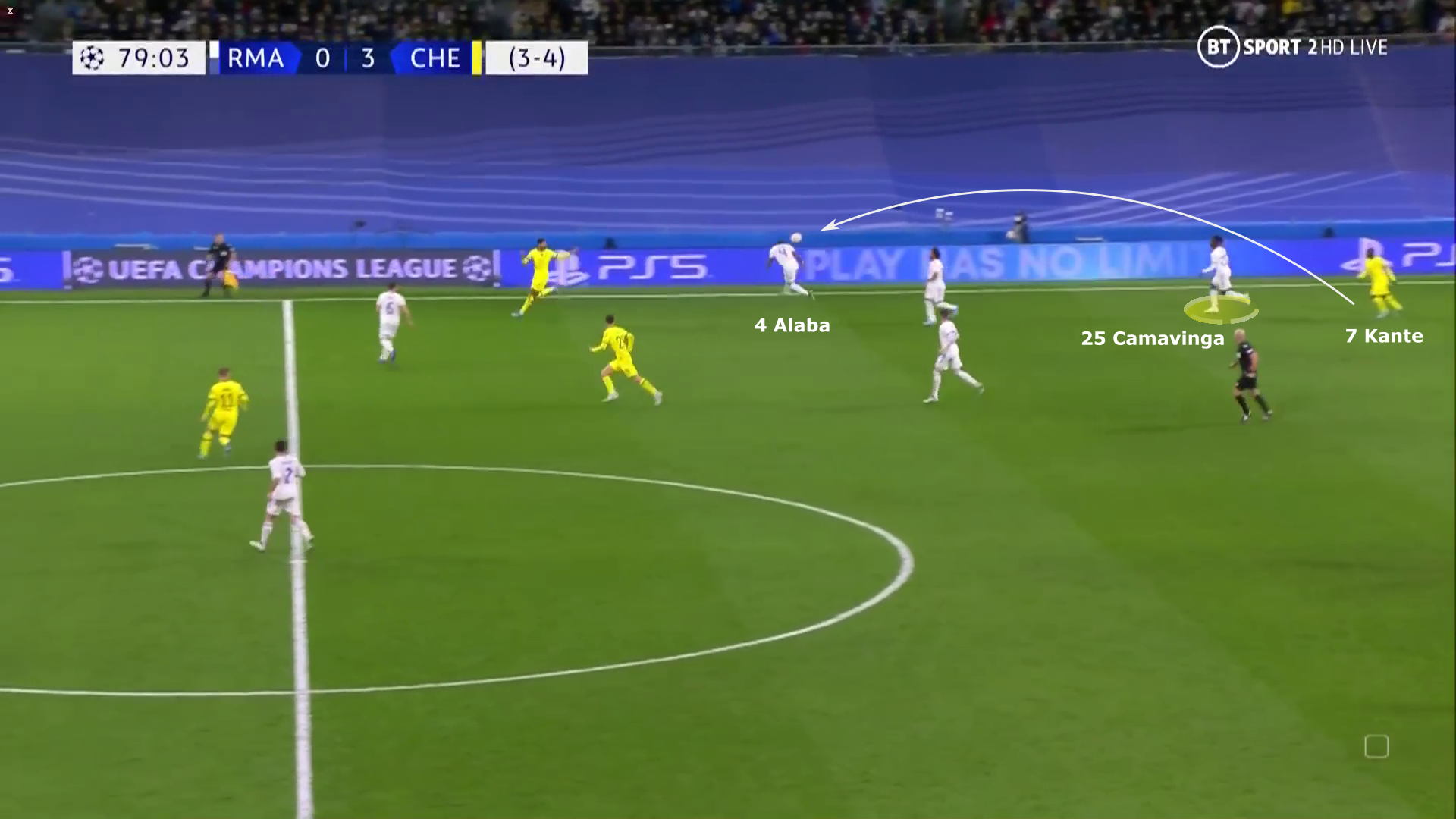 At the start of the additional period, Chelsea again win back the ball around their penalty area. Thiago Silva plays a one-touch pass to Kante. Once more, Camavinga showed the hunger and desire to react first and intercept the pass. 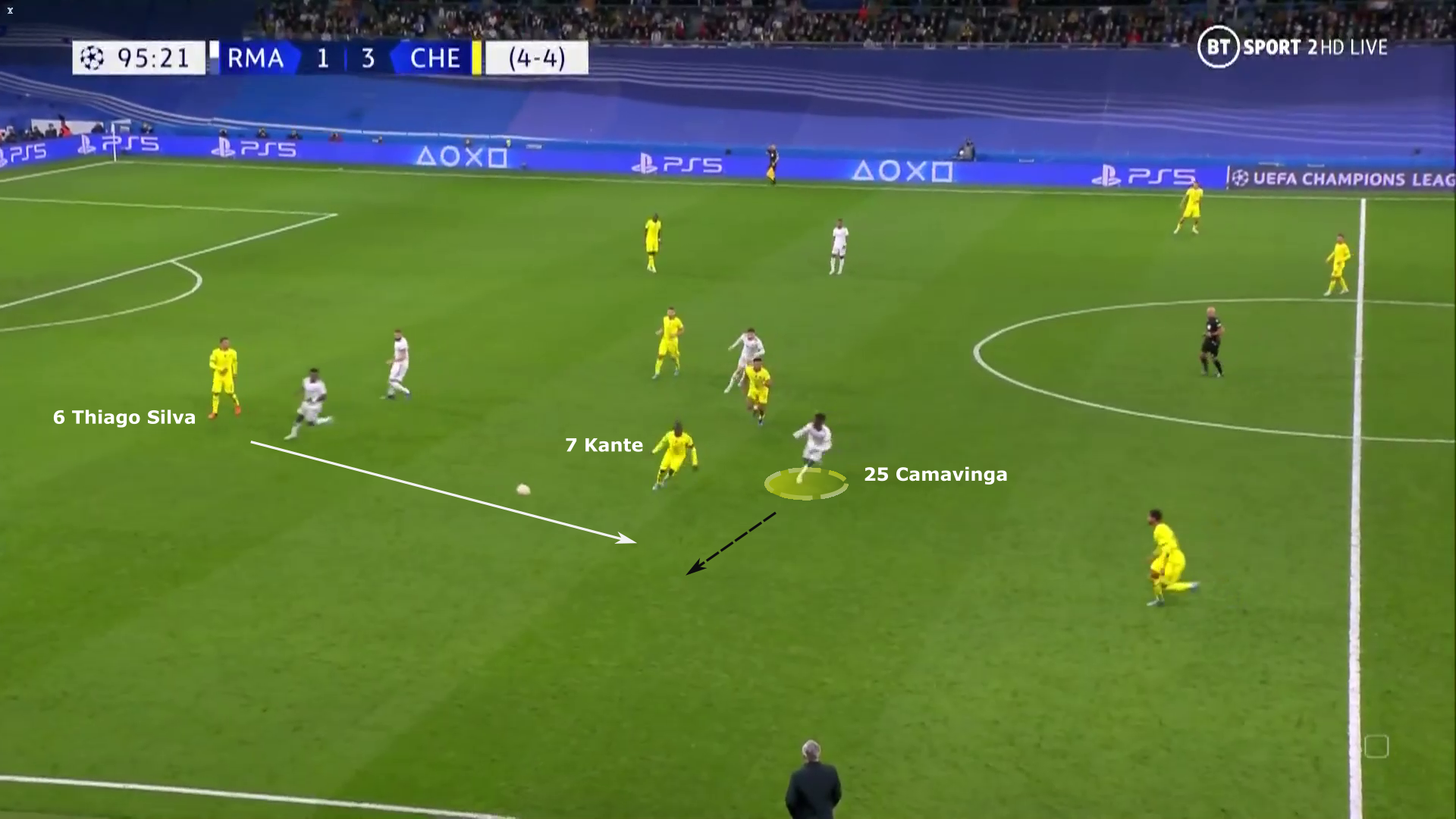 He takes a touch and fizzes a through ball into Vinicius, who’s cross lands on Benzema’s head and into Mendy’s net. 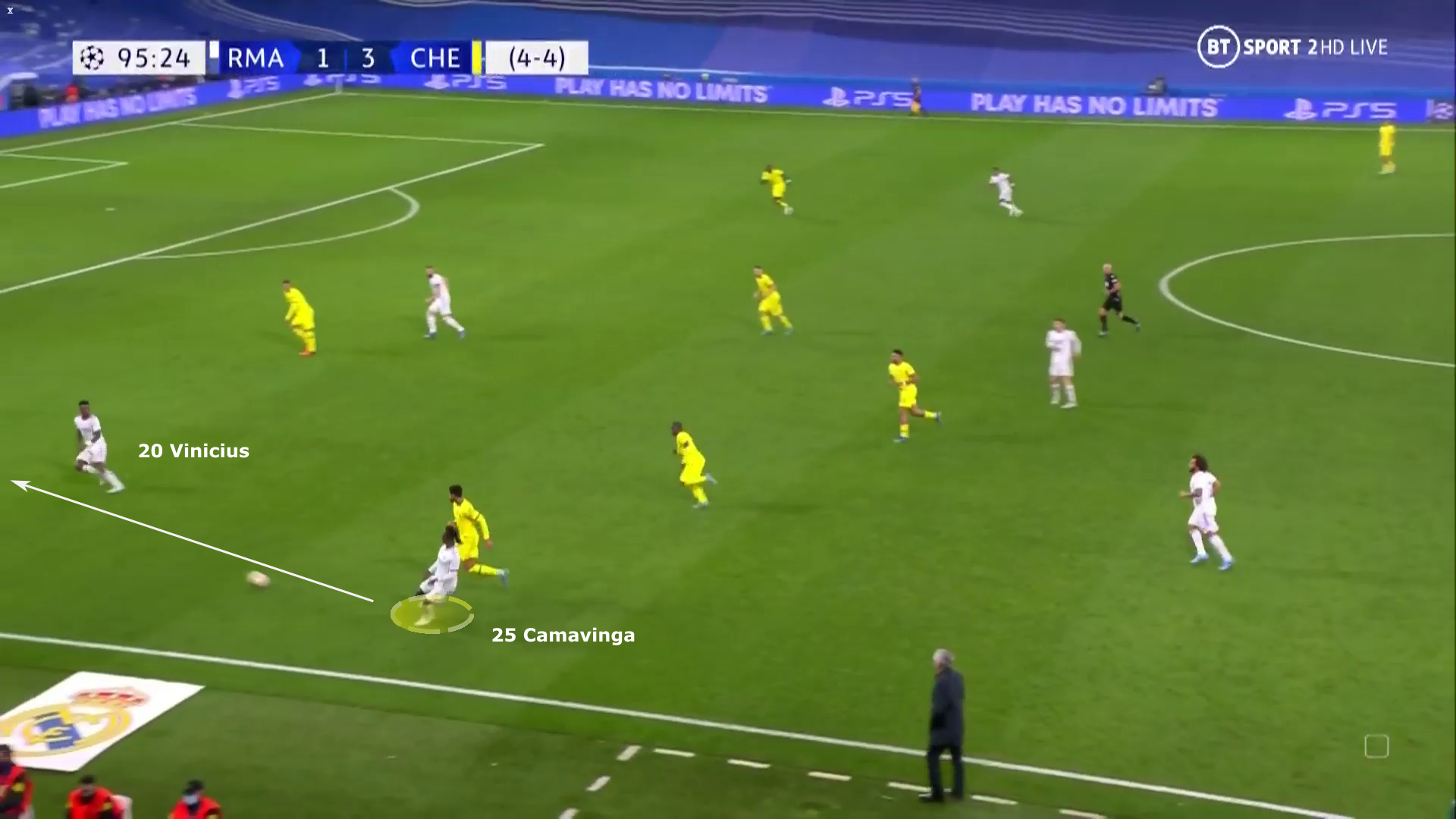 Camavinga played with the spirit and the composure of the Madrid midfield greats of the past and present. He did so without a shred of nerves. There were no sloppy touches. No lapses in concentration. No need for any sort of adjustment to the pace and the demands of such difficult conditions, such a difficult game against a highly-skilled and well-coached Chelsea.

Camavinga’s most influential display came against Man City in the quarter-finals. In the first leg, Madrid were battered but somehow managed to escape with a 4-3 defeat. When Mahrez scored in the 73rd minute to make it 1-0 on the night, the tie seemed unsalvageable even by Madrid’s standards and recent heroics. On came Camavinga in the 75th minute to replace Modric. At that point, the veteran midfield of Kroos, Modric and Casemiro were all subbed off. Ancelotti went all-out attack, needing two goals to tie the game.

Camavinga was unplayable. He made some inch-perfect tackles (4) and was always around to recover the ball, supporting his teammates. City started to dominate and the home team were tiring. The recovery tackle to stop Bernardo Silva bursting into Madrid’s penalty box was superb. Silva had done brilliantly to manipulate his way between Vinicius and Camavinga and break away. 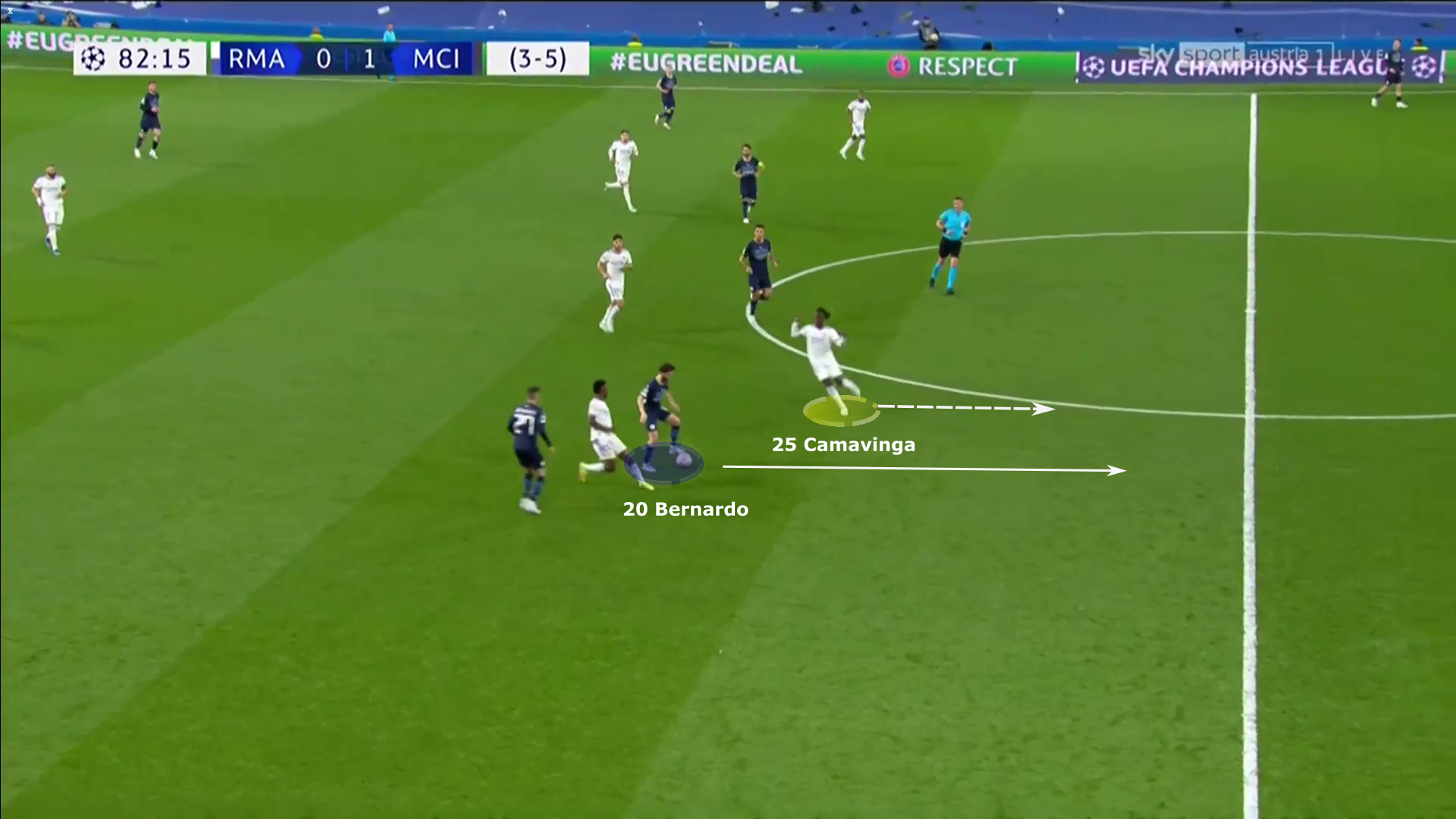 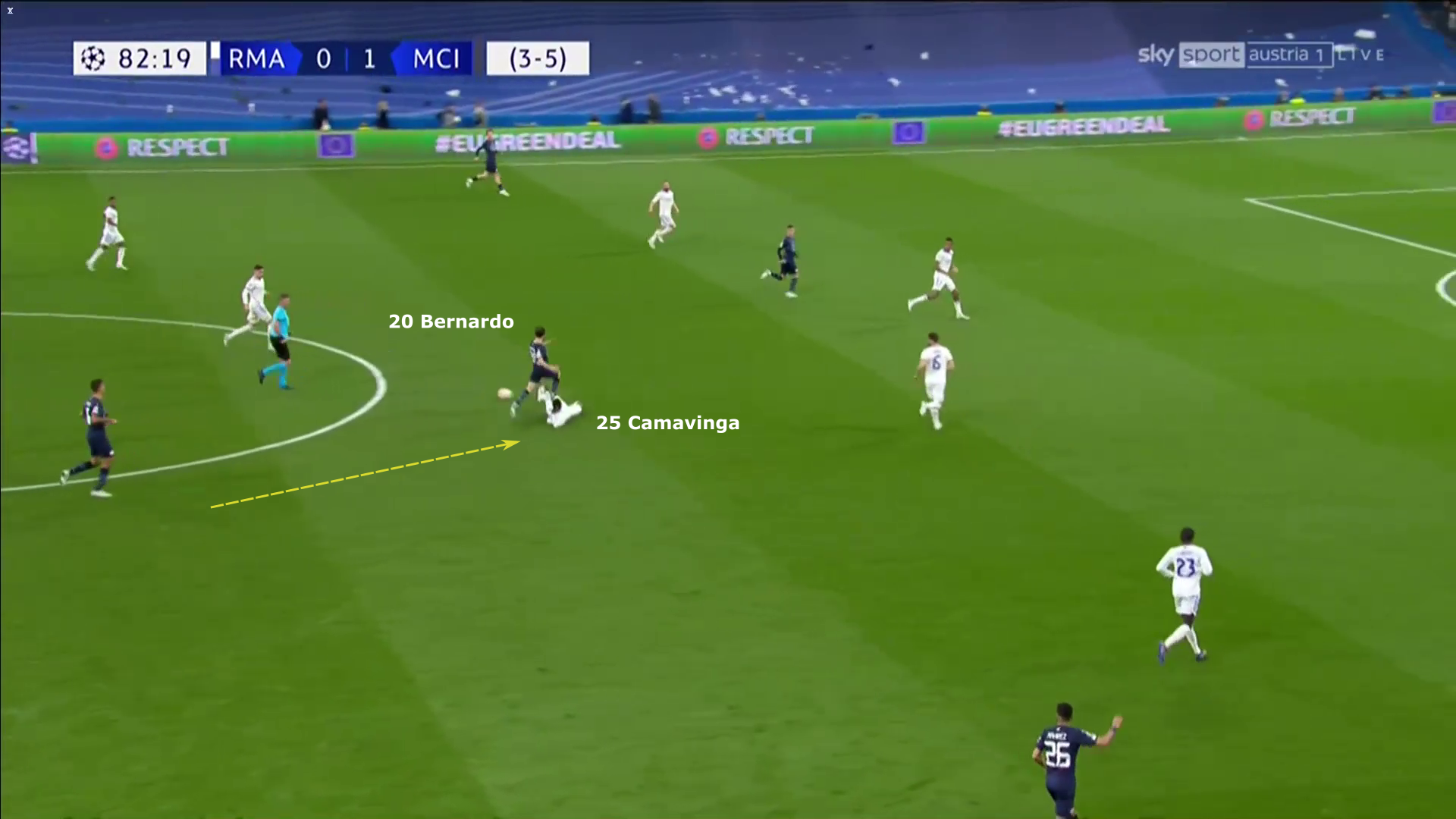 His positioning and awareness to prevent passes between the lines was evident when comparing the move leading to City’s goal to a similar situation minutes later. For the goal, Gundogan splits Madrid’s midfield and opens up the pitch in an instant to find Bernardo completely unmarked. Madrid’s midfield three are all attracted towards the ball carrier. 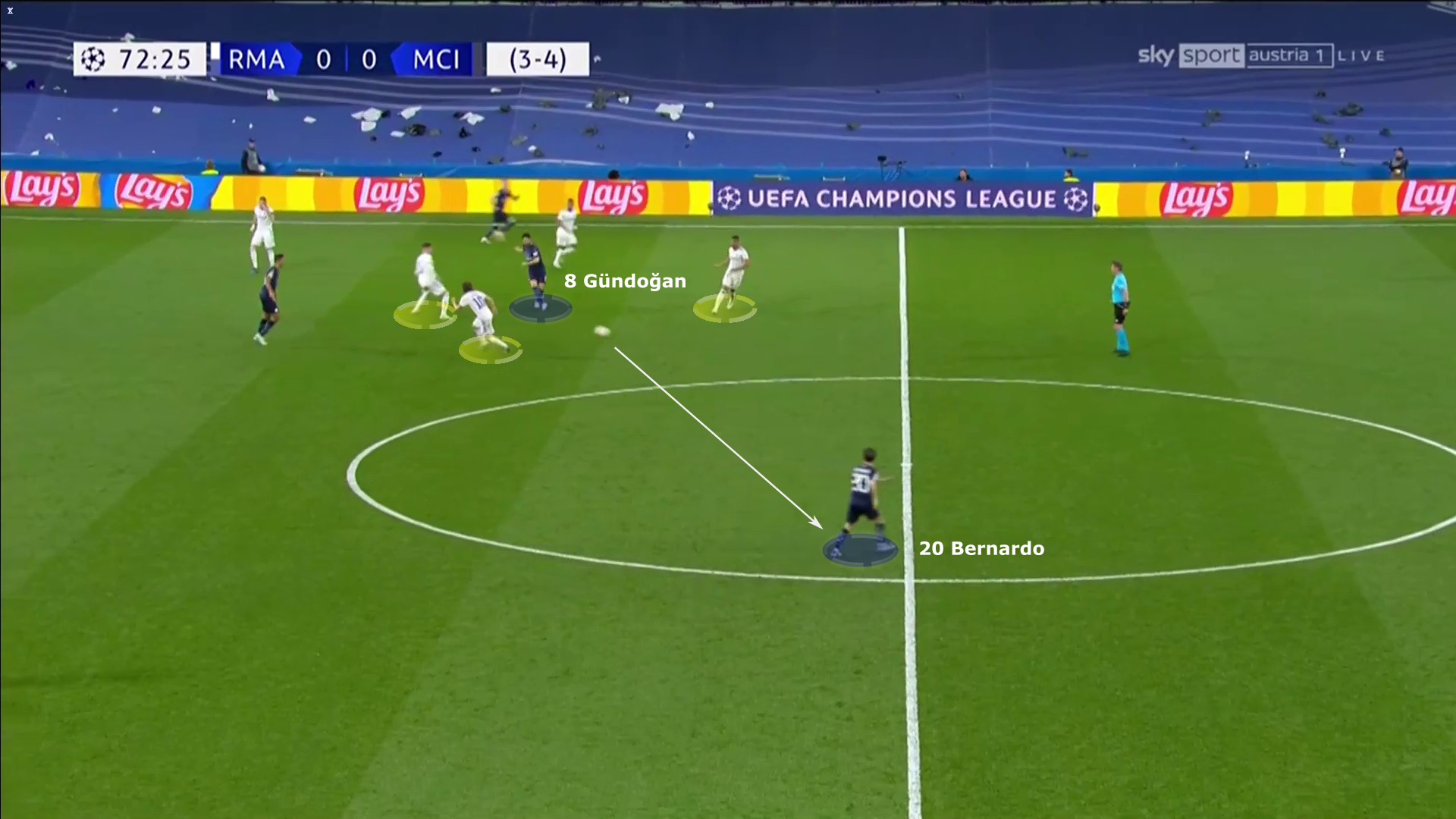 When the same play starts to develop minutes after, Camavinga senses the danger and looks to block the passing lane to Bernardo in a similar position. 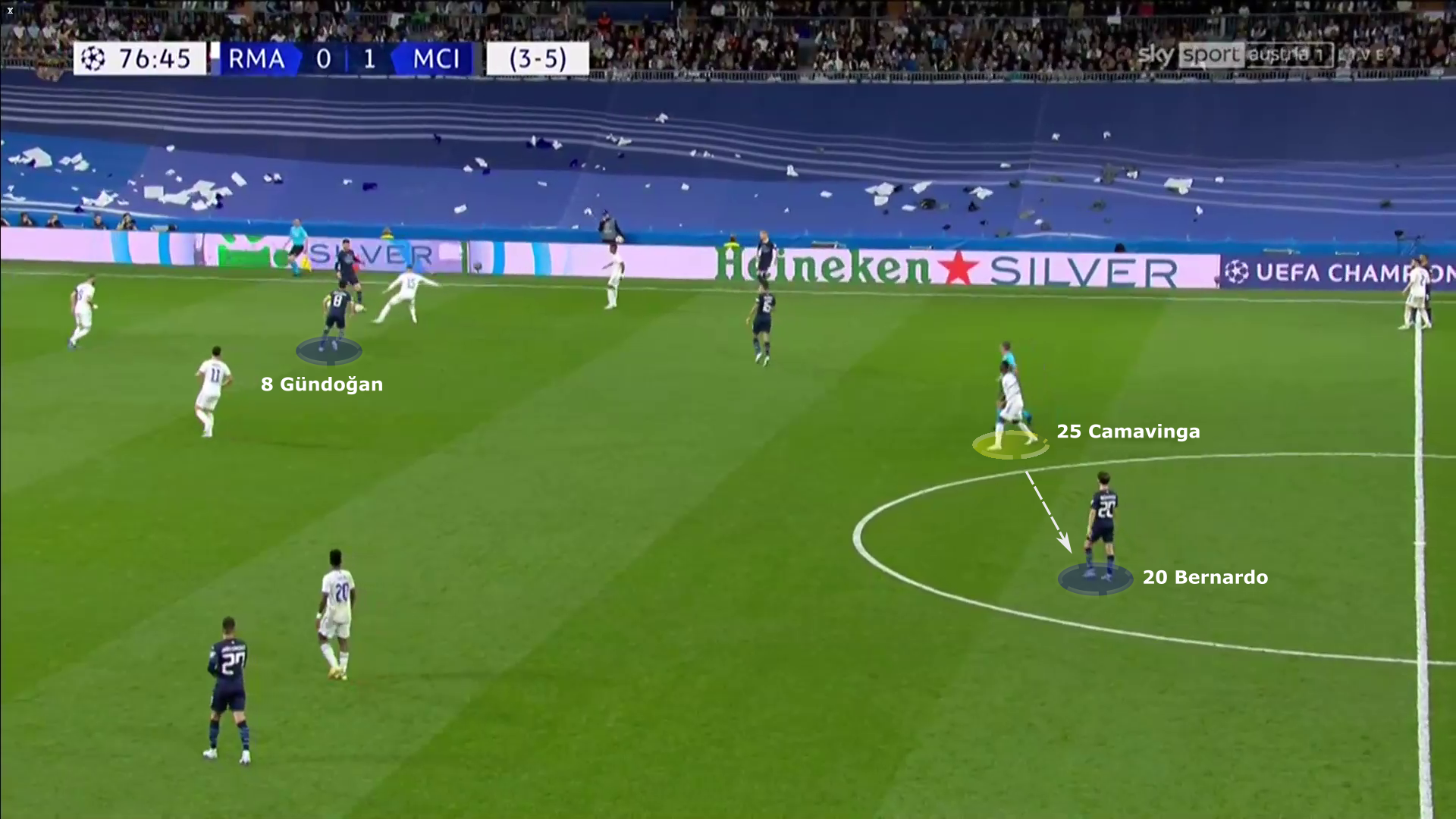 How about the vision and technique to pick out Benzema for the first goal? Minute 89 and on the brink of elimination, the team needed someone to take responsibility, take risks and create something special. 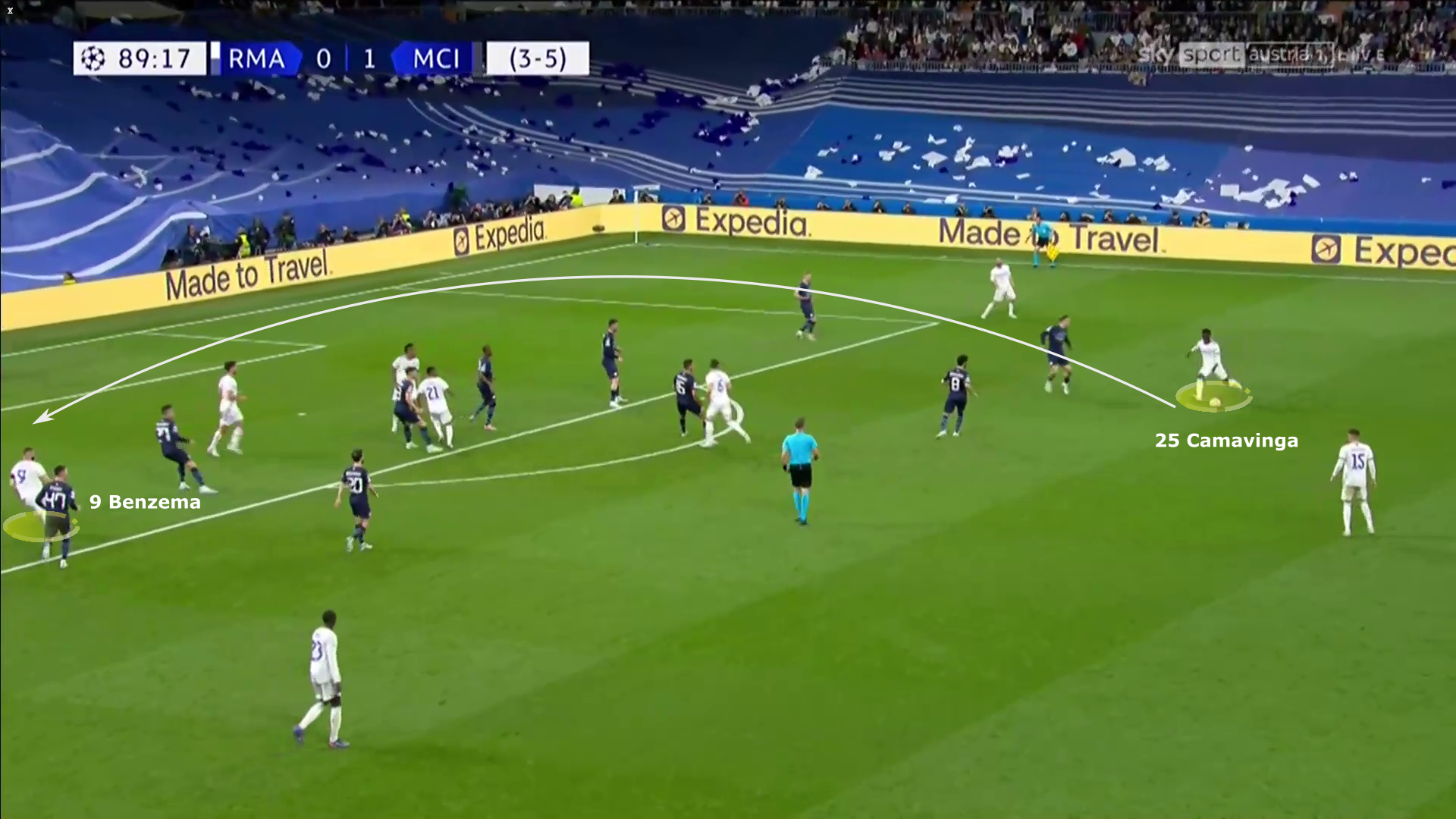 Seconds after kick-off, Camavinga wins the ball back and the attack ends with Rodrygo’s leaping header blowing the roof off. Come extra time, the momentum was with Los Blancos. Everyone in the stadium felt it. Everyone at home knew it.

Camavinga receives the ball from Courtois. He runs from deep in his half, past Rodri, past everyone. No one could keep up. 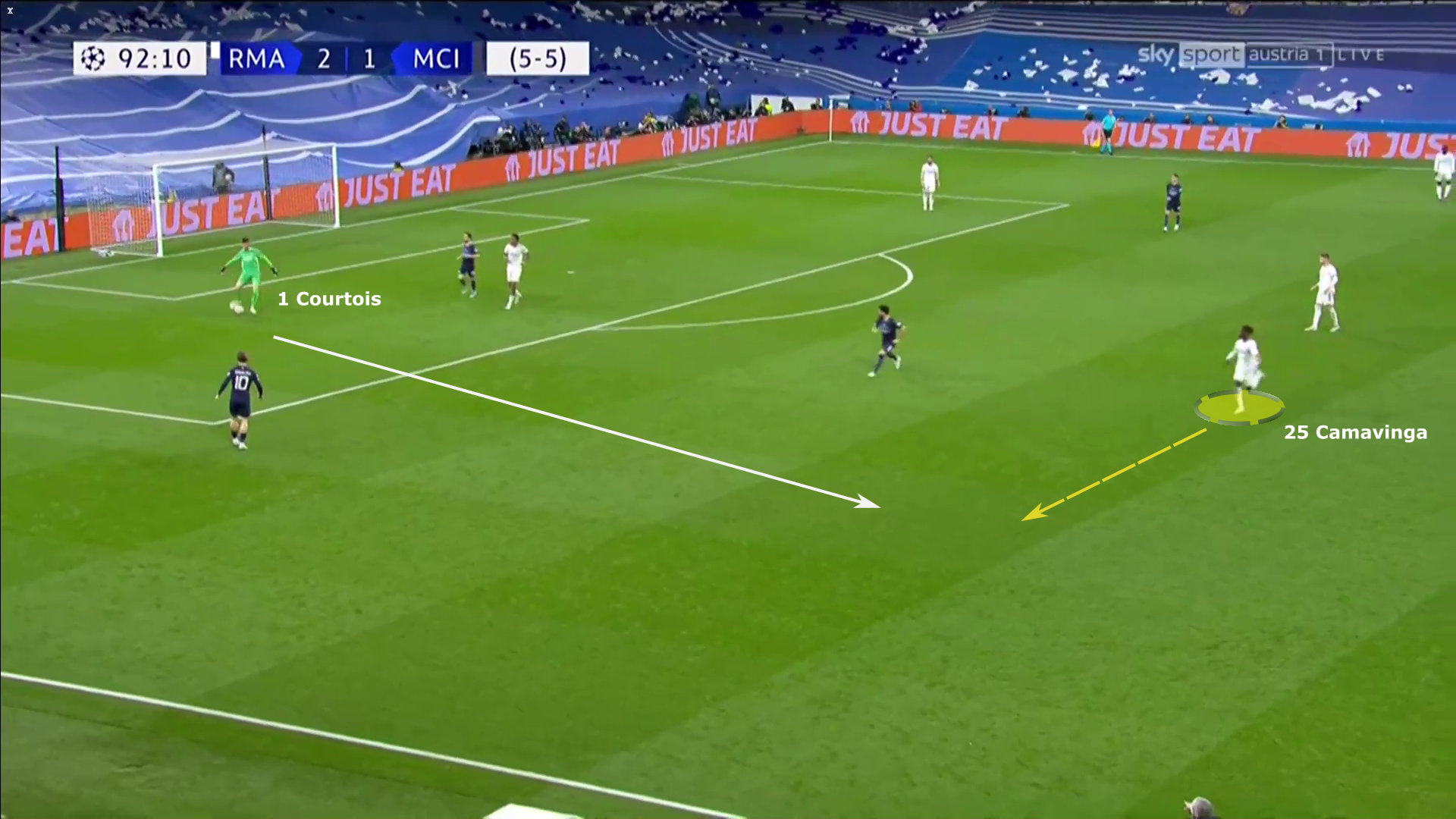 He waits for the right moment and slips it to Rodrygo to cross to Benzema, who is taken down by Ruben Dias for the match-winning penalty. 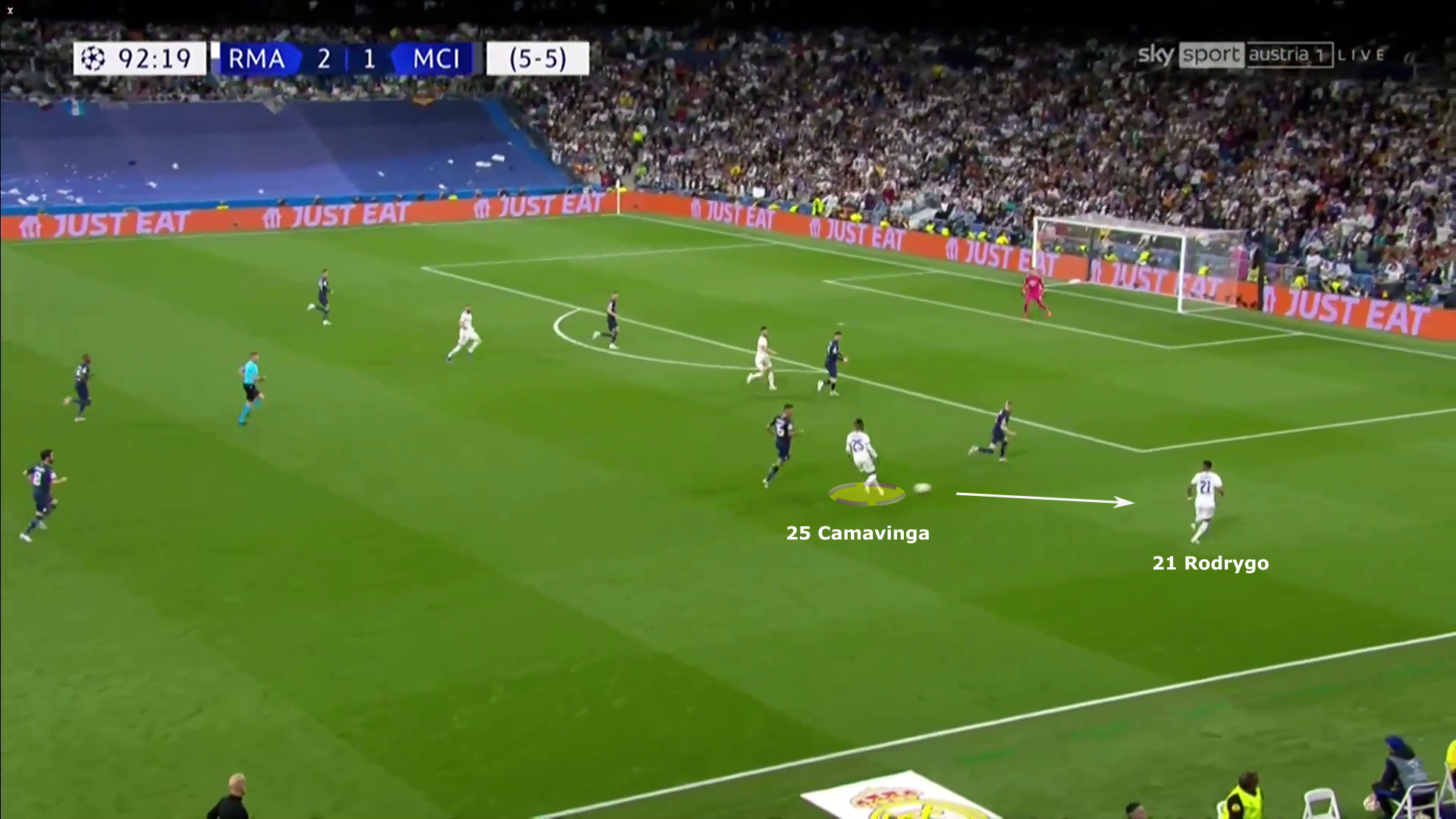 The most incredible, inexplicable comeback completed to send Madrid through to the final in Paris.

A section of the Real Madrid fans are questioning why Camavinga is not starting more games. We did not discuss the first leg ties above. No minutes in Paris, 16 minutes in London, and 20 minutes in Manchester. This is not chance. Camavinga arrived last summer from Rennes for €30M. He is still 19 years of age and has only been playing top-flight football for three years. This is his first season appearing in the Champions League. He is still learning his trade, making mistakes and getting a feel for the big games.

Camavinga did not make it off the bench in five out of a six-game period between January and February. The one game he did play? Hooked at halftime. Playing in Real Madrid’s midfield brings its own demands, risks and pressure. Camavinga enjoyed a good start to his Madrid career, getting a goal and an assist on his debut. He has started only 11 league games, though. He is a good ball-winner, dribbler and has great passing range, but his discipline and positioning are causes of concern. The reality is that Kroos, Modric and Casemiro are still Madrid’s best midfield partnership.

The focus on who starts a game is increasingly misplaced; those who end it are often as important. Ancelotti did not call upon Camavinga when the games were evenly poised and discipline was required. The second leg scenarios presented the perfect opportunity to utilize Camavinga from the bench. With the team desperate; needing to take risks and throw caution out the window.

The kid was able to carry his team when it mattered most. On the biggest stage, against the French, European and English champions. Only 19, Real Madrid have found their midfield powerhouse for the foreseeable future. To cap off his first season with a La Liga and Champions League winner’s medals would be the stuff of dreams.