Manchester City’s transfer business has come under some scrutiny as of late as a result of under-performing signings. However, the signing of Ederson Moraes from Benfica has been arguably the best in his position across Europe for some time. Although he was one of the best goalkeepers in Portugal, he was relatively unheard of. He has since become one of the best and most promising goalkeepers in the world. He now competes with Liverpool’s Alisson for the Brazilian number one jersey.

This tactical analysis will look at how his strengths make him one of the best goalkeepers in the world, but also how his weaknesses mean he still has a lot of improvement. We will compare him to other goalkeepers in Europe and look at his shot-stopping, sweeping, and passing abilities. Still, at 27-years-old, the Brazilian has only just entered his peak. After winning two Premier League titles in three full seasons with Manchester City, he has certainly already been a success.

The best passer in Europe?

Ederson is one of the few goalkeepers who gets praised more for his passing abilities rather than shot-stopping. Pep Guardiola was looking for a goalkeeper who could play out from the back to replace then number one, Joe Hart.

He not only has the ability to play out from the back but to start attacks for his team. The Brazilian has an xG Chain value of 10.41, the highest in the Premier League. Meaning his actions lead to good chances for his team. But how do his passing statistics compare to his peers? 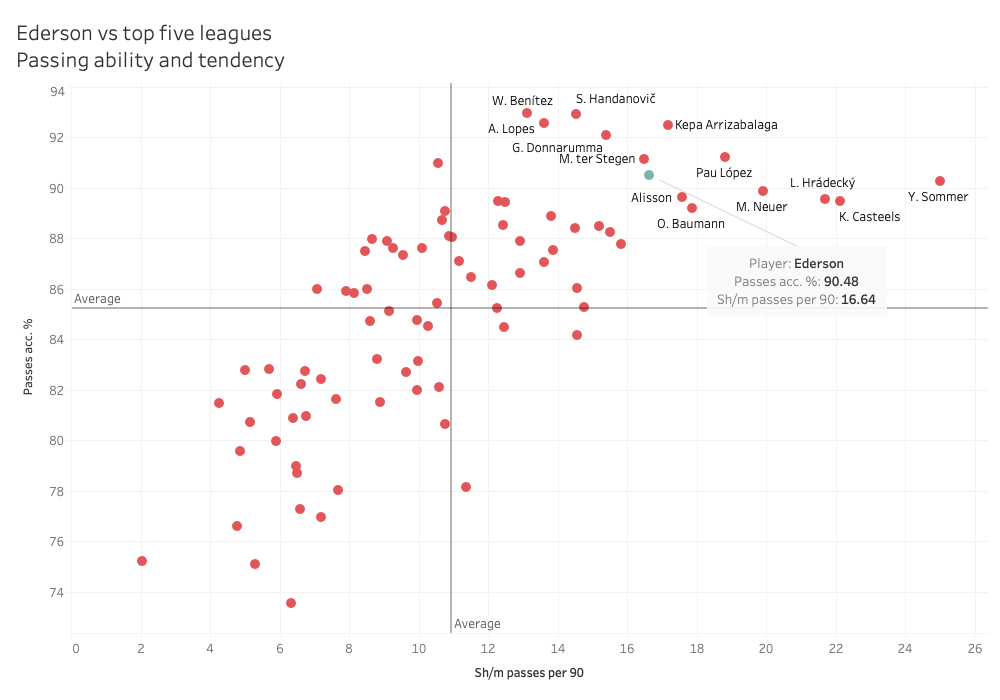 As we can see from the above graph, Ederson ranks amongst the best passers in Europe. He makes an above-average amount of short/medium passes per 90 with 16.64 and completes 90.48% of these. It’s clear that the keepers who are most comfortable with the ball at their feet all play for Europe’s elite. For example, Barcelona’s Marc-André ter Stegen and Bayern Munich’s Manuel Neuer, who both rank close to Ederson.

Although Guardiola wanted a goalkeeper to be comfortable with the ball at his feet, Ederson offers much more to this Manchester City team in an attacking sense. Ederson excels at finding teammates in space within his own half using a chipped pass technique. Throughout the 2019/20 season, Ederson attempted 502 medium passes, and completed a huge 99.2% of them.

In the above example, we see how Ederson’s simple yet effective pass technique allows his team to get on the front foot. He receives the ball and spots right-back, Kyle Walker, in space. He uses a chipped pass, with enough power on, to find an inch-perfect pass to the Man City man. Because the pass was so accurate to Walker’s feet, he’s then able to advance up the pitch with his defender behind him.

This simple pass technique allows Ederson to start an attack for his team. However, he is very skilled at using harder pass techniques, some that other goalkeepers would not dare to attempt, to create chances.

Here, against Southampton, Ederson spots Bernanrdo Silva in space. However, there are several opposition players between the two. The Brazilian drives a pass along the floor straight to the feet of Silva. Ederson’s quick decision to spot this option, and then execute it, proves that he is one of the best passers in Europe’s top five leagues. The driven pass technique ensures that the ball gets to the receiver as quickly as possible.

Whenever Ederson gets the ball, he instantly looks to get his team on the attack, often creating chances for his teammates. The 27-year-old starts 0.31 quick breaks per 90. His ability to claim crosses and his skill to accurately kick out of his hands means that he can advance his team up the pitch quickly.

In this example, we can see how early Ederson begins an attack. He is on the edge of his six-yard box when he decides to kick the ball. His power and accuracy mean that he is able to do this. He finds the space in front of his teammate and starts a dangerous attack for his team. Ederson is able to turn defence into attack in a matter of seconds, a huge bonus for any team.

A risky, but rewarding, advanced position

With Manchester City dominating possession, Ederson taking up an advanced position means he plays almost as a third centre-back. His high position makes him an extra passing option.

Here, even against a good team like Chelsea, we see how high up the pitch Ederson is positioned, fitting in with his team’s tactics. Being in this position allows the two centre-back to spread wider, which in turns allows the full-backs to get higher up the pitch. In this example, Ederson is able to find Walker, who is wide on the right, and with the Chelsea winger pressing the centre-back instead, Walker is given more space.

However, Ederson’s advanced position isn’t always beneficial to his team. It has been exploited in recent times. If he himself, or his team lose possession, then it could be very costly.

Here we can again see how high up the pitch Ederson is because his team has possession. He passes it to Aymeric Loperte who then gives it to Oleksandr Zinchenko. The latter loses possession and Southampton begin a counter-attack. The ball falls to Che Adams who is able to very simply lob the ball over Ederson and into the City net. This is an example of how Ederson’s high position could cause problems.

But given Manchester City’s excellence in retaining possession, his advanced position is more of an advantage. As highlighted previously, it helps his team keep possession and force the opposition back. But it also helps them defensively, with Ederson making 1.11 defensive actions outside of his penalty area per 90.

With Manchester City playing a high line with and without the ball, it’s important that Ederson be confident defending the space between the defensive line and his goal. In this example against Manchester United, we can see how important his sweeping ability is. If Ederson doesn’t intercept this ball, then Marcus Rashford will get a one-on-one opportunity.

Although we’ve seen that Ederson is a world-class shot-stopper, he is prone to an error. Leading some to believe that the lack of shots he faces causes him to lose concentration. Ederson’s positioning is what causes errors. But his reflexes are second to none.

In the above situation against West Ham, Ederson pulls off a great double save using his reflexes and reach. He saves a point-blank header from Antonio, but his save goes straight to another West Ham player. He uses his incredible reflexes to get across and save a shot right in the corner of the goal.

But how does he compare to the rest of Europe? 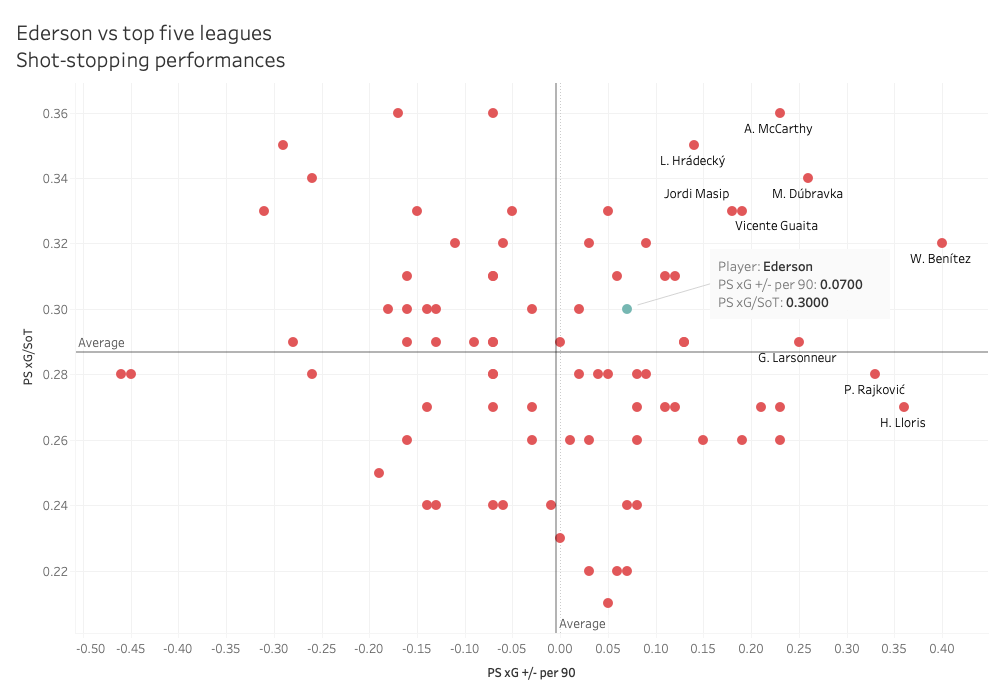 As we can see in the above graph, Ederson is above average in both areas. Although he doesn’t face many shots, the ones he does face are often above the average difficulty. He also saves 0.07 goals per 90, showing that he saves more shots than he’s expected to save.

However, he does often make costly errors that can cost his team in close and important matches. These errors often arise from his bad positioning or decision making. During one-on-one situations, Ederson has a bad tendency to rush out and dive at the opposition’s feet, rather than stay closer to the goal and give himself more time to react.

In this situation against Jamie Vardy, the striker takes advantage of the Brazilian. Instead of being patient and waiting for Fernandinho to put pressure on Vardy, Ederson rushes out and dives at his feet. Vardy, being an experienced finisher, takes advantage and lifts the ball over the keeper into the back of the net. Ederson’s bad decision-making means that he often gets caught out.

As we can see in the first image, Ederson is already way too far off his line. The attacker hasn’t even entered the box yet, and the keeper is passed his penalty spot. Ederson must wait closer to his line so that he maximizes the time he has to react to a shot. However, in this scenario, the ball is tackled into the path of a Lyon player further back. Ederson begins to retreat, meaning that when the attacker strikes the ball, he’s in no position to attempt the save.

We can see that this is a clear weak spot in Ederson’s game that he must improve on.

This scout report has outlined why Ederson is classed as one of the best goalkeepers in the world. Playing for a team as good as Manchester City means that his statistics often look very good. He is arguably the best passing goalkeeper in Europe and has the confidence to match it. His advanced positioning means that he plays like an 11th outfield player and sweeps up behind the defensive line. However, this analysis has shown he can be found wanting in terms of his positioning whilst faces an attacking situation. Still, at 27, Ederson has a lot of improvement, meaning that he’s only going to get better.