The ‘Kolkata Derby’ is regarded as one of the best and fiercest derbies in the world. However, the absence of fans in the stadium took away the enormous emotional aspects and fiery build-up to the game. Mohun Bagan after merging with ATK  formed ATK Mohun Bagan who were playing in the Indian Super League for the first time. SC East Bengal too were playing in India’s topmost league for the first time after the backing of their new sponsor, Shree Cements.

The fixture was a cagey affair throughout, however, it was ATKMB who had the last laugh.

In this tactical analysis, we will analyse the tactics and intricacies of both the managers and the reason it turned out to be a cagey affair. 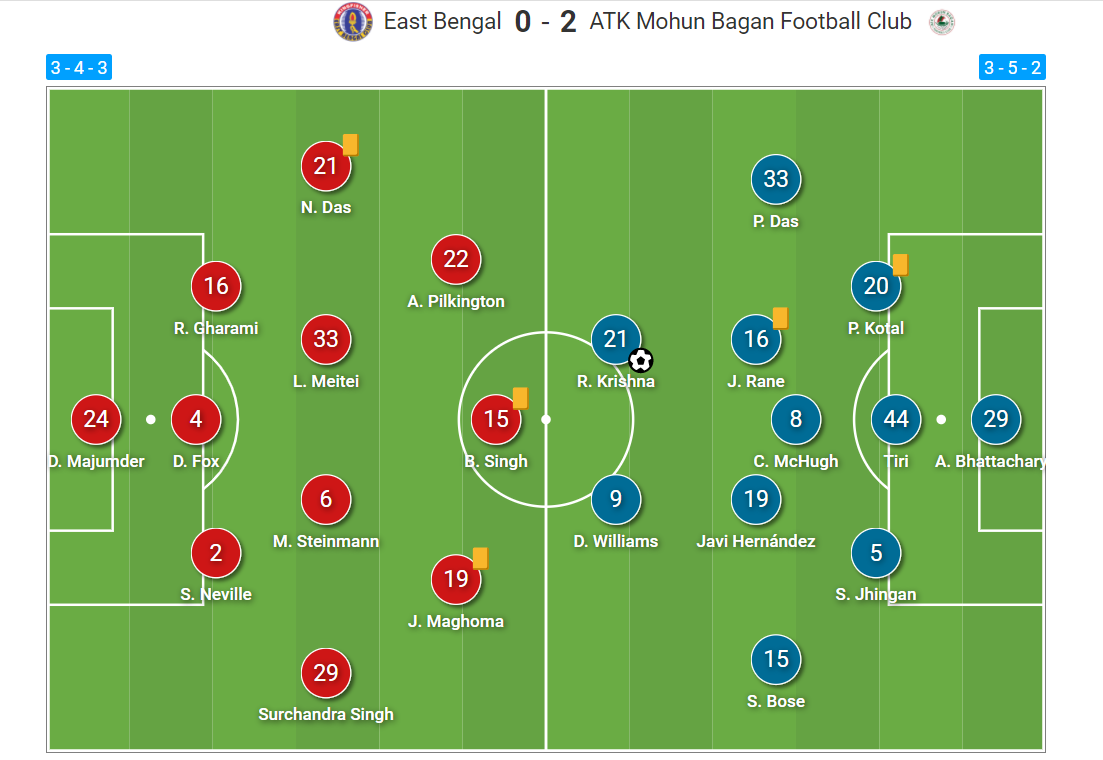 Antonia Habas stuck to his preferred 5-3-2 and made only one change to the lineup that won against Kerala Blasters. Jayesh Rane started in place of the Bengali Pronay Halder.

ATKMB pressed East Bengal in a 5-3-2 midblock in a space-oriented man marking system. Space-oriented man marking is a mix of zonal marking and man-marking where each player has a space to cover and when an opposition player moves into the space covered by a player, he is aggressively pressed by that player. The front two keep their shape and one presses the ball-carrier centre-back when he steps into any of the front two’s space where the other shifts with respect to his teammate’s position. 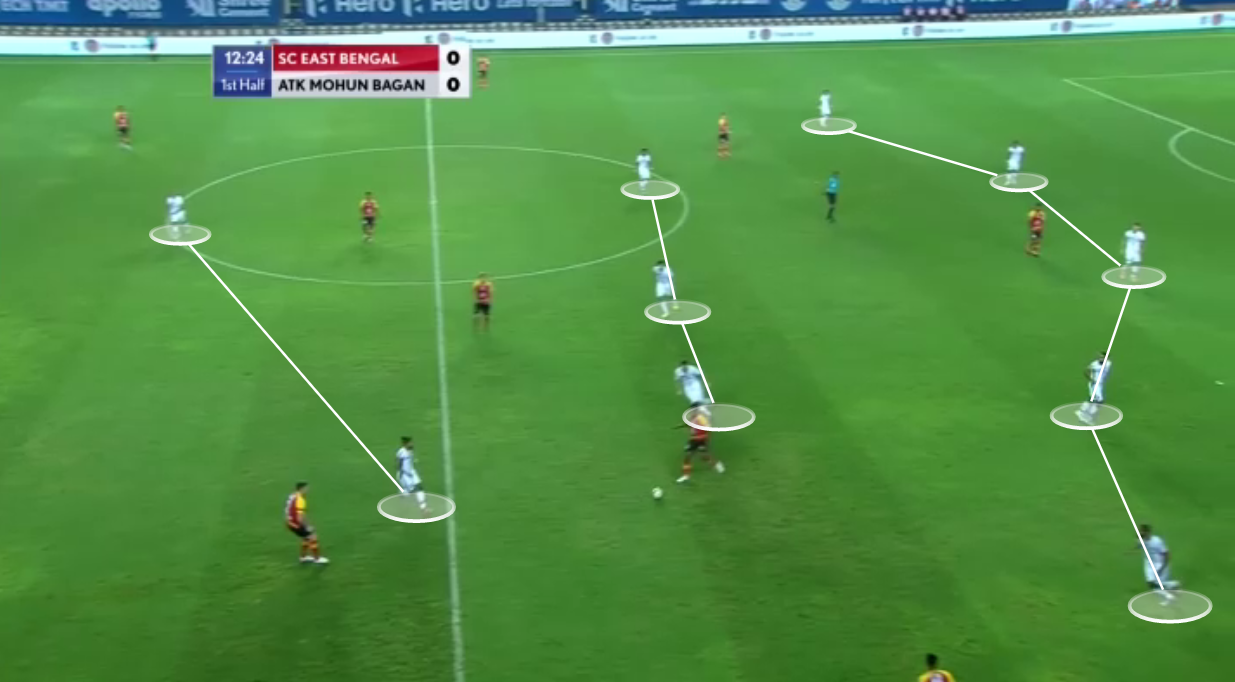 Here, you can see, Roy Krishna presses Neville when the Australian steps into the striker’s space. Javi Hernández aggressively presses Maghoma as soon as he steps into Hernández’s space. The other midfielders too stay closer to their respective opponents in their space.

East Bengal’s build-up revolved around Steinmann. He played the second-most passes in the match, only less than Fox. Whenever, the German midfielder received the ball, one of the midfielders would move up and press him, only if East Bengal have bypassed ATKMB’s first line of press. 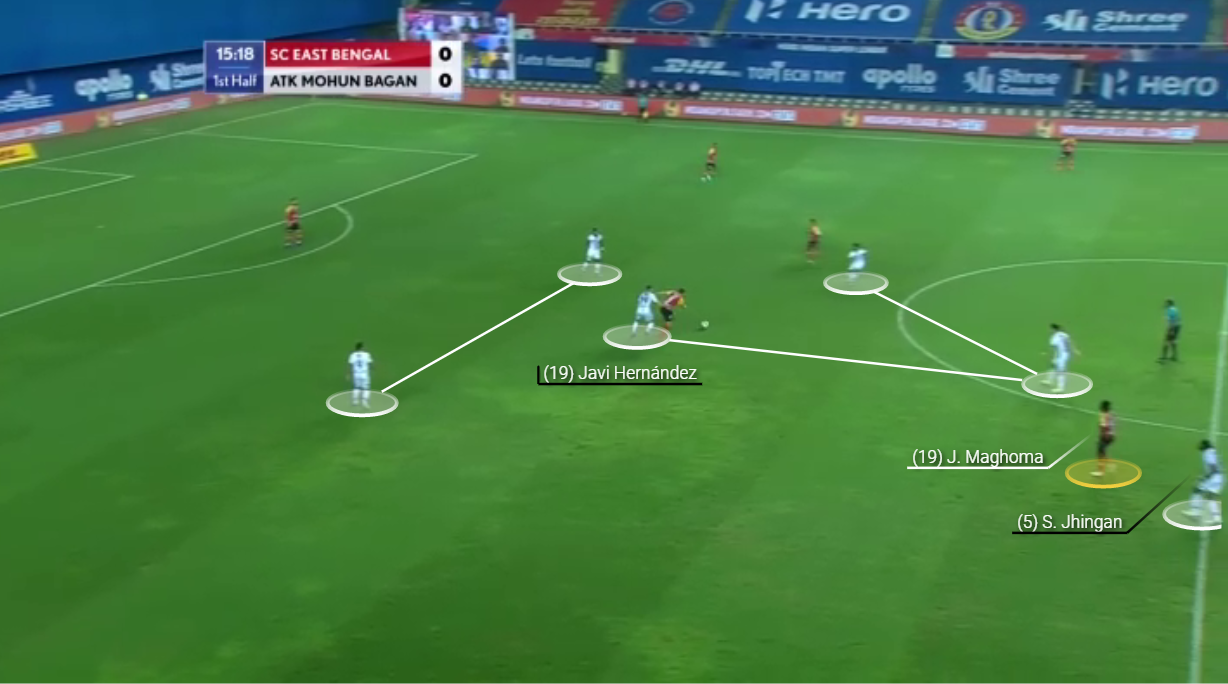 The other aspect of their pressing structure was that whenever Maghoma used to drop deep, Sandesh Jhingan followed him until and unless Maghoma stepped into any other ATKMB player’s zone. 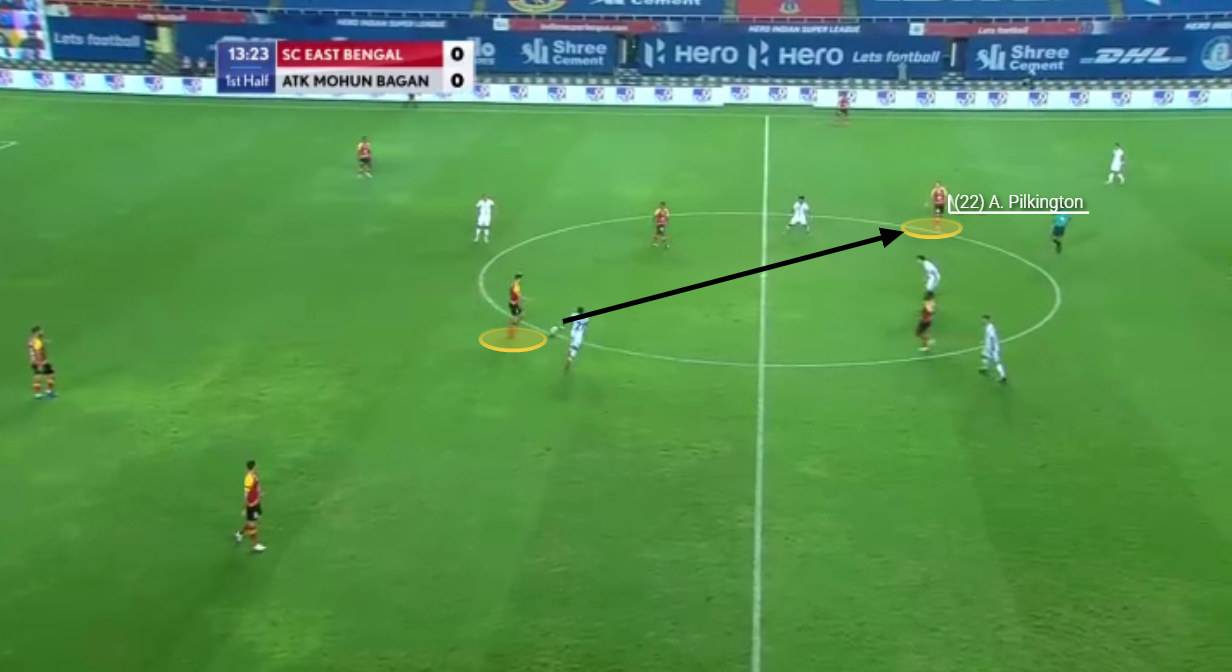 However, a flurry of ATKMB bodies waited for him and his teammates after that. Here, you can see, there was only Narayan Das to support him and the left wing-back had no crossing option inside the box but Balwant. East Bengal were heavily underloaded in the final third to cause any damage to ATKMB. 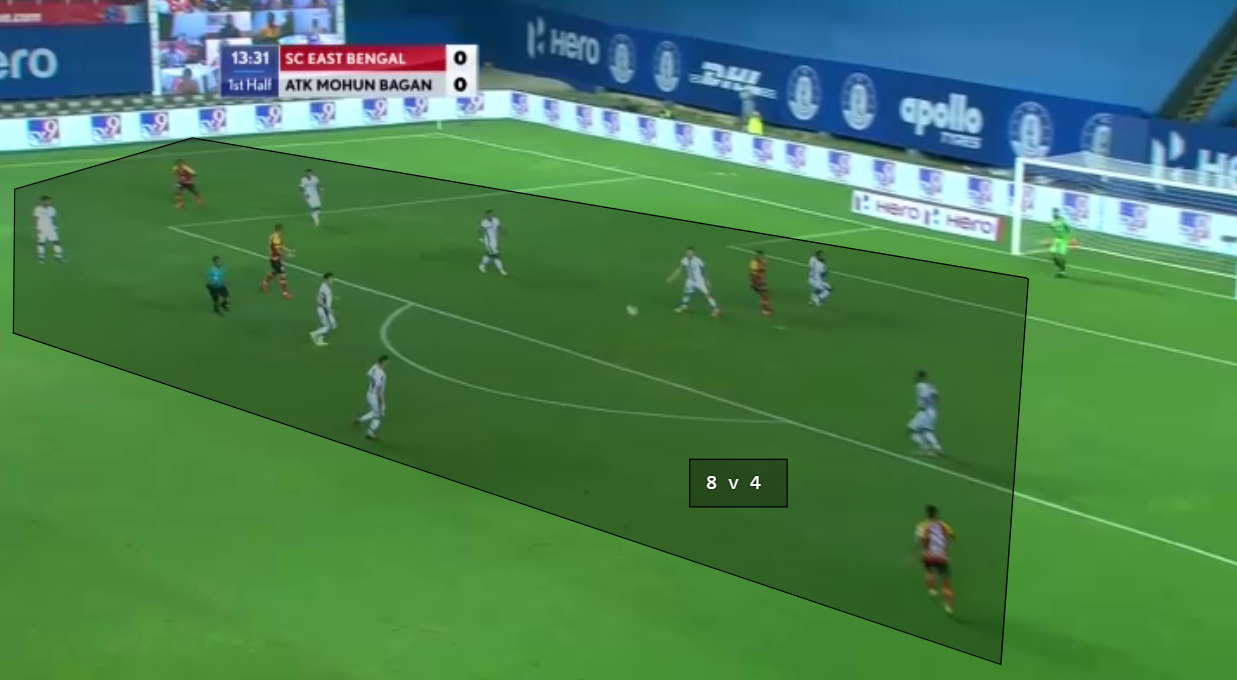 ATKMB rectified that glitch in their system as well. After a few such occurrences, Pritam Kotal too moved up and followed Pilkington till he got to any of his teammate’s space/zone. 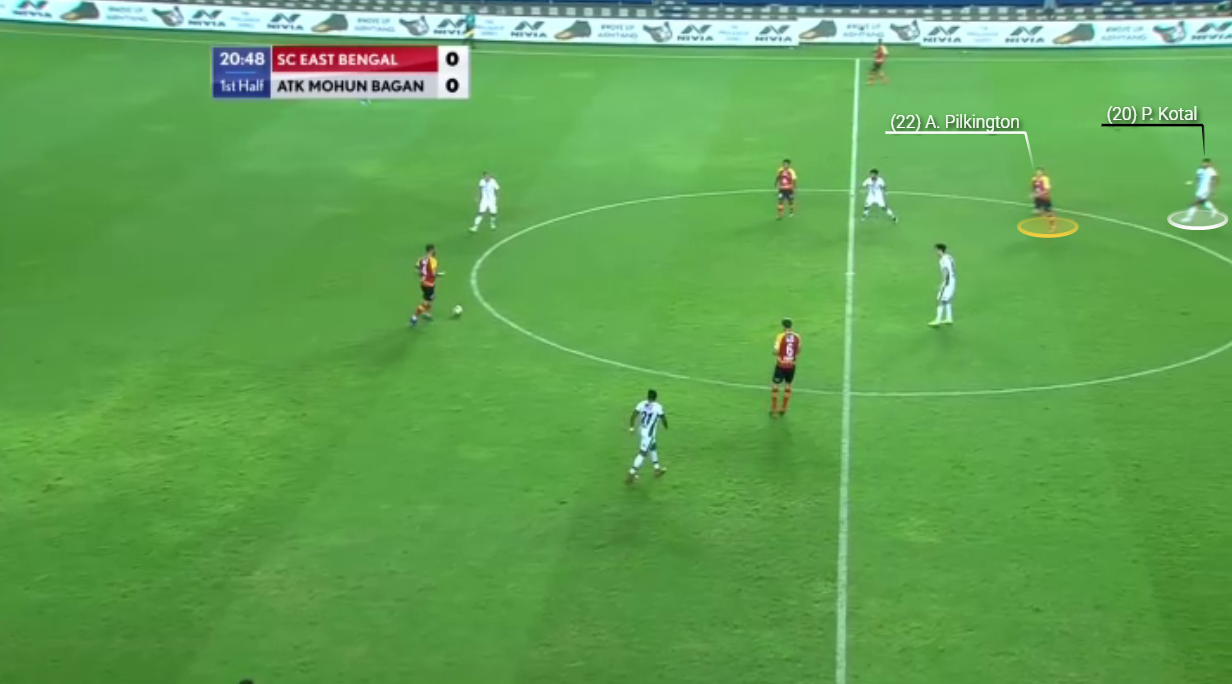 The only way East Bengal could beat ATKMB’s second line of press was now some exquisite skills by their players. 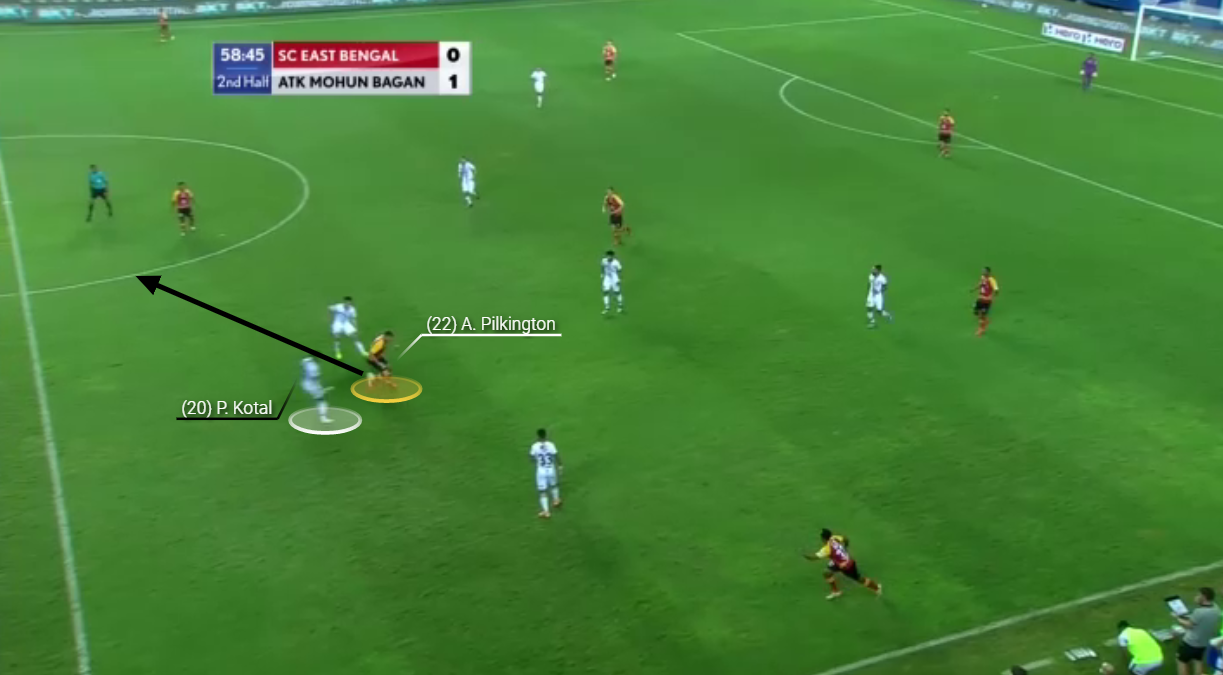 Here, as you can see, Pilkington backheels the ball to Meitei who was in a lot of open space, and the home team was unfortunate to not equalise from this situation.

ATKMB’s defensive structure is second to none. The solidarity and compactness of Habas’ system is worthy of immense praise. However, Fowler’s tactics did not help East Bengal’s cause. It was too one-dimensional and the former Liverpool player had no ‘B plan’.

The only way East Bengal could have exploited ATKMB was their separation between Jhingan and the left wing-back, as also was seen in the first image in this section. 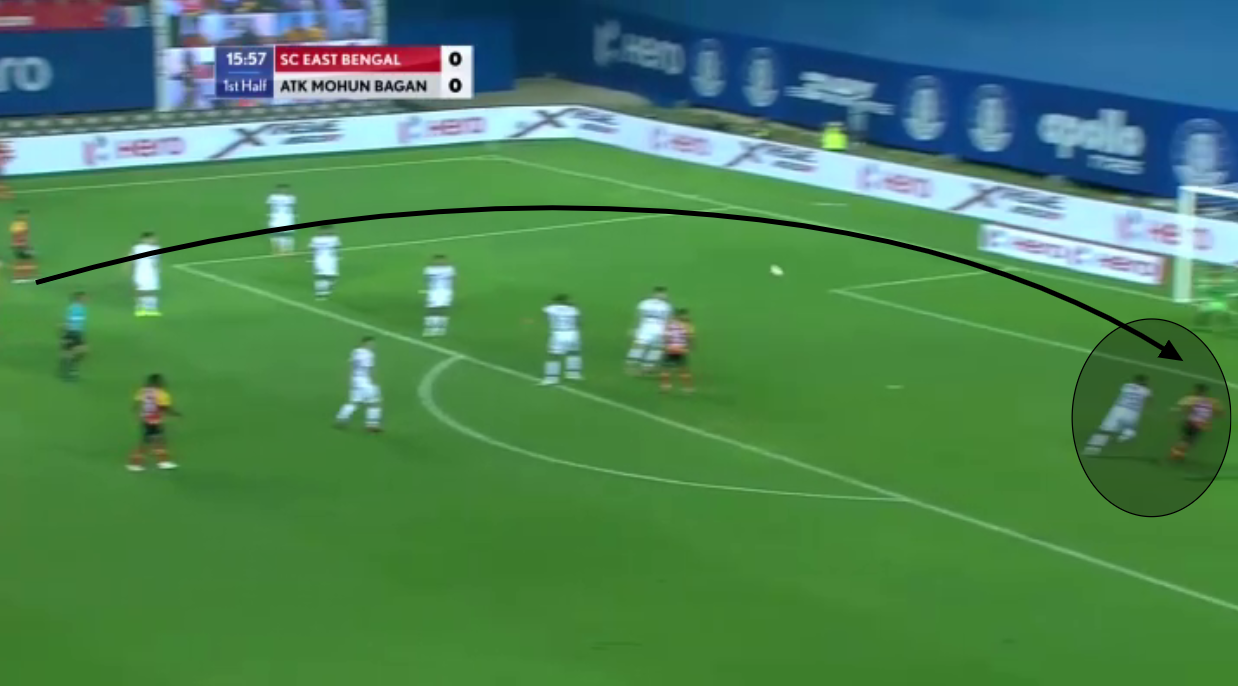 Here, Meitei delivered a beautiful ball inside the 18-yard-box but Surchandra Singh could not reach it.

More of such crosses inside the box could have troubled ATKMB but the ATKMB midfielders stood to their task. They would quickly close the space in any other instance.

East Bengal lined up in a 5-2-3/5-4-1 low to midblock, out of possession, depending upon the dynamics of ATKMB’s build-up. The first line of press consisted of Balwant, Pilkington, and Maghoma and the double pivot formed the second line of press .The two lines positioned very close to each other, leaving no space in the centre. 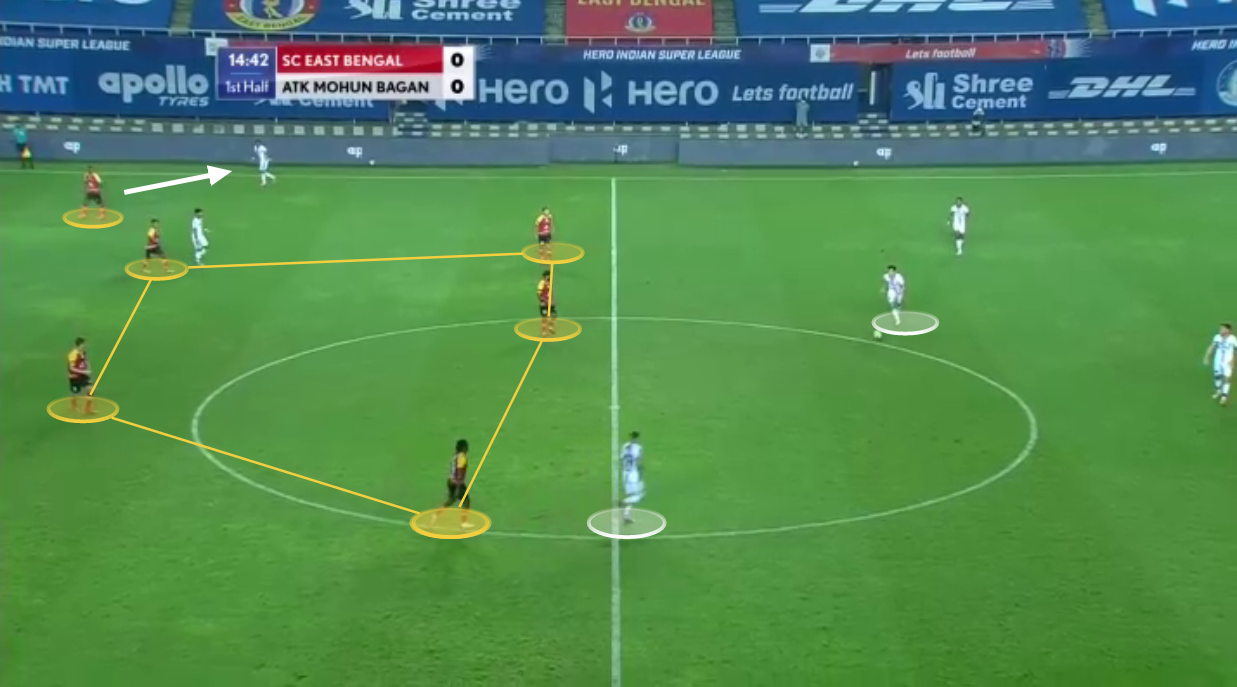 ATKMB’s build-up was too passive with two midfielders, mainly Javi and Carl McHugh, behind EB’s first line of defence and Jayesh Rane within the cage or beyond the cage. The main aim of ATKMB was to find the wing-backs making a marauding run or Krishna through long balls. 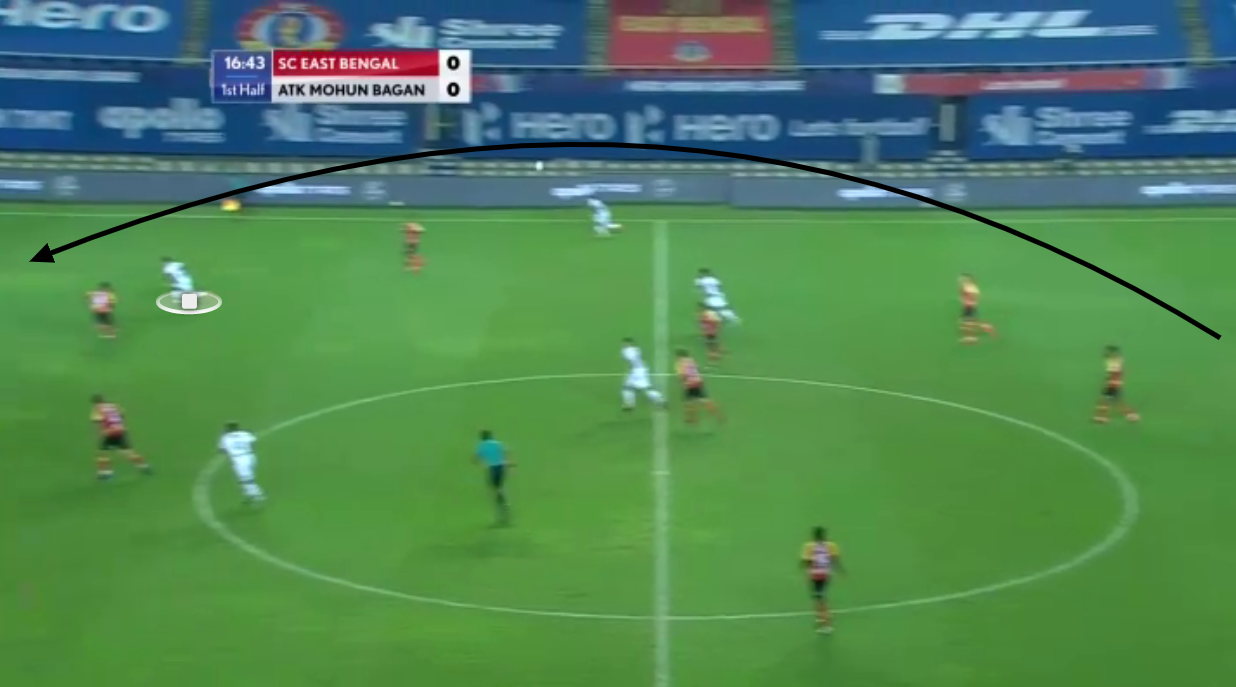 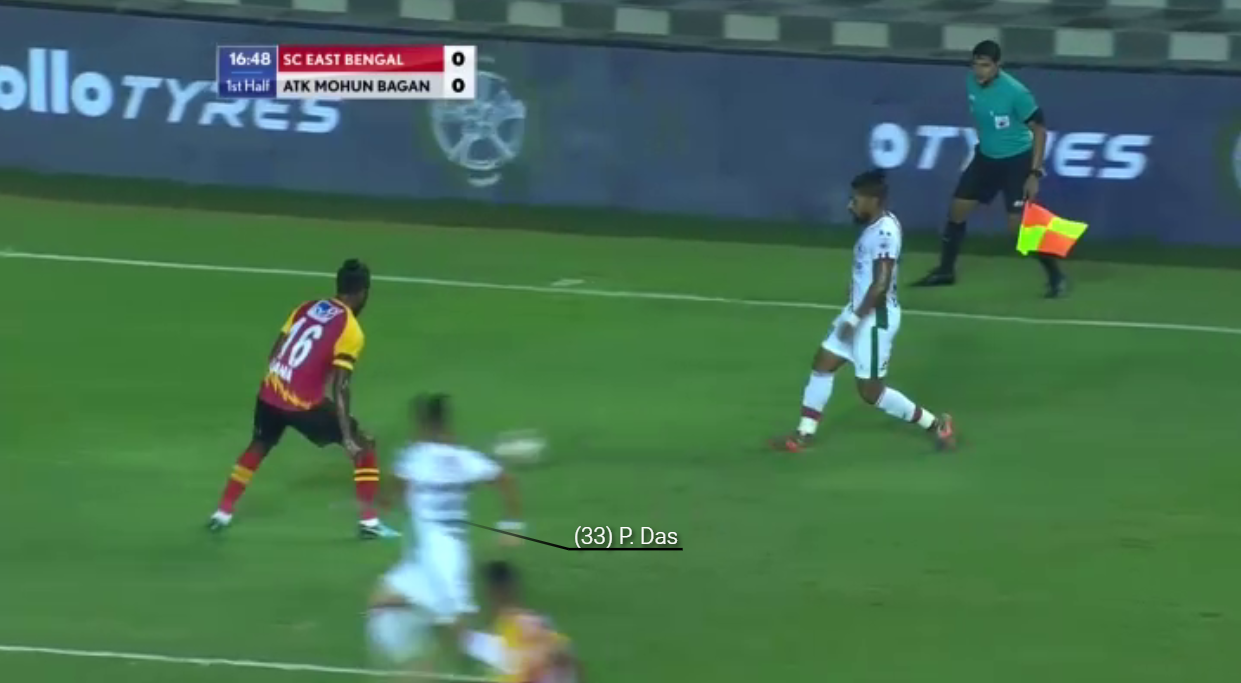 Krishna, when he was successful in receiving the pass from his teammates, would wait for Prabir Das to make an overlapping or underlapping run, depending upon the situation.

This was the only common pattern of build-up by ATKMB. The two goals ATKMB scored was due to the brilliance of Roy Krishna again and through counter-attack late in the second half.

The ‘Kolkata Derby’ was a cagey affair that we all expected. No one seemed to give each other space and ATKMB is most dangerous when they don’t have the ball.

ATKMB as they usually do, sat back in the majority of the game and finished East Bengal with their clinicality in front of their goal. ATKMB’s resolute defence need no second introduction and Fowler lacked ideas to break ATKMB’s compact defence. The former Liverpool and Manchester City striker clearly wanted to attack from their left with Pilkington as their focal point as shown in the analysis. 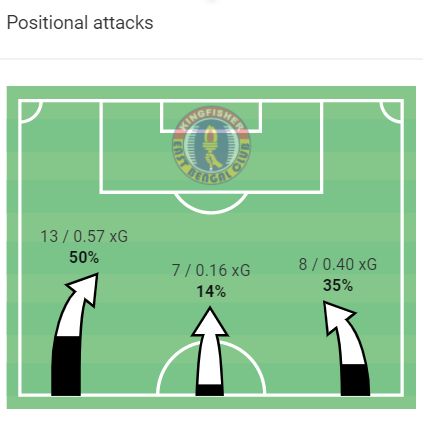 However, East Bengal fans shouldn’t be devastated by the result as it was Red and Gold Brigade’s first match and there were many positive signs.