Marseille came into this game in a good run, having won their last three Ligue 1 games. However, they had just lost in their midweek against Porto in the UEFA Champions League. In fact, they now hold the record for the most consecutive losses in this competition, so it is safe to say that fans are still not happy. With them being nearly out of this tournament, they should focus on Ligue 1 to go higher up in the league.

Nantes had won one and drawn two of their last three league games. This is an average record, but they are still in the bottom half of Ligue 1 where there are teams above them who have inferior teams than them. Therefore, they have a chance of escalating positions if they manage to use their players wisely as they have the ability to be higher up the league.

This game ended in a 3-1 win with Marseille being dominant most of the game and having more chances to score. In this tactical analysis, we will observe how the coaches planned the game with their tactics and how they evolved. In this analysis, we will see how both teams pressed, the build-up, and the attack. 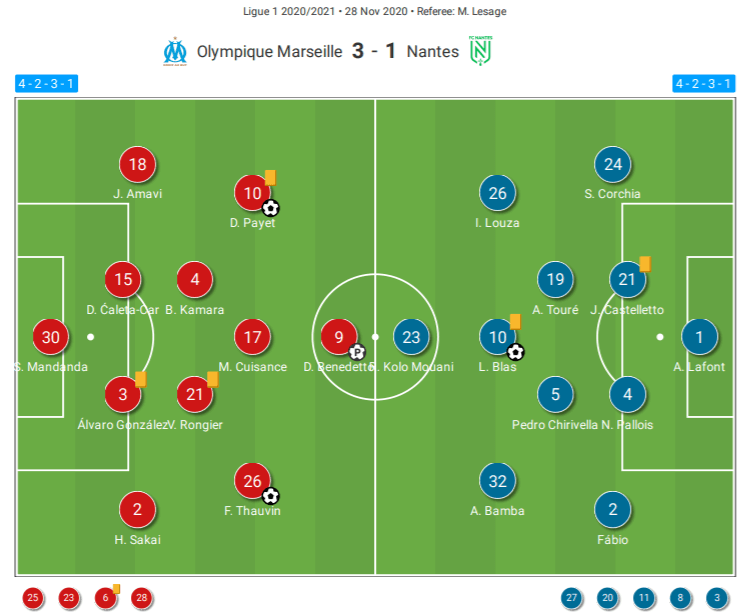 Marseille started in a 4-2-3-1, with Darío Benedetto leading the attack and Michaël Cuisance behind him. The wingers were Dimitri Payet and Florian Thauvin, with Valentin Rongier and Boubacar Kamara as pivots. Then, the back four was made up of Hiroki Sakai, Álvaro González, Duje Ćaleta-Car, and Jordan Amavi, with goalkeeper Steve Mandanda behind them.

Nantes also played in a 4-2-3-1. Alban Lafont started in goal for Nantes while the centre-backs were Jean-Charles Castelletto and Nicolas Pallois, with Fábio da Silva and Sébastien Corchia to their sides. The midfield was composed of Abdoulaye Touré and Pedro Chirivella, as well as Ludovic Blas, being attacking midfielder. The front three were Kader Bamba, Kolo Mouani, and Imran Louza.

With Marseille being the superior team and having two pivots, Nantes knew that they were going to try to build-up very often. Therefore, in the first half, they decided to press high to disrupt their play but also to make quick attacks if they recovered the ball.

However, they had some problems with pressuring well. In the image below, we can see how they usually set themselves up to pressure. The attacking midfielder would join the striker to basically become a second striker and make the team a 4-4-2 when pressuring. This was done so that there would be two strikers marking the two centre-backs, meaning they would not have superiority there anymore.

Then, both midfielders are marking the two pivots that came down to help. This is where one problem arose. Marseille knew that the Nantes midfielders would mark their pivots and so they put people in the middle behind these midfielders to be alone to receive the ball.

Since the 4-4-2 has two lines of four players, Marseille put players in between the midfield and defensive line by making Dimitri Payet and Michaël Cuisance, who is on loan from Bayern Munich, come inside. In this occasion, Nantes can either make their wingers come inside to mark them or make their defensive line come up a lot more.

Either way, both of these actions mentioned would open up space elsewhere which means that the Nantes players pressuring high would have to be very intense to not let a pass go through to the Marseille players who are alone. 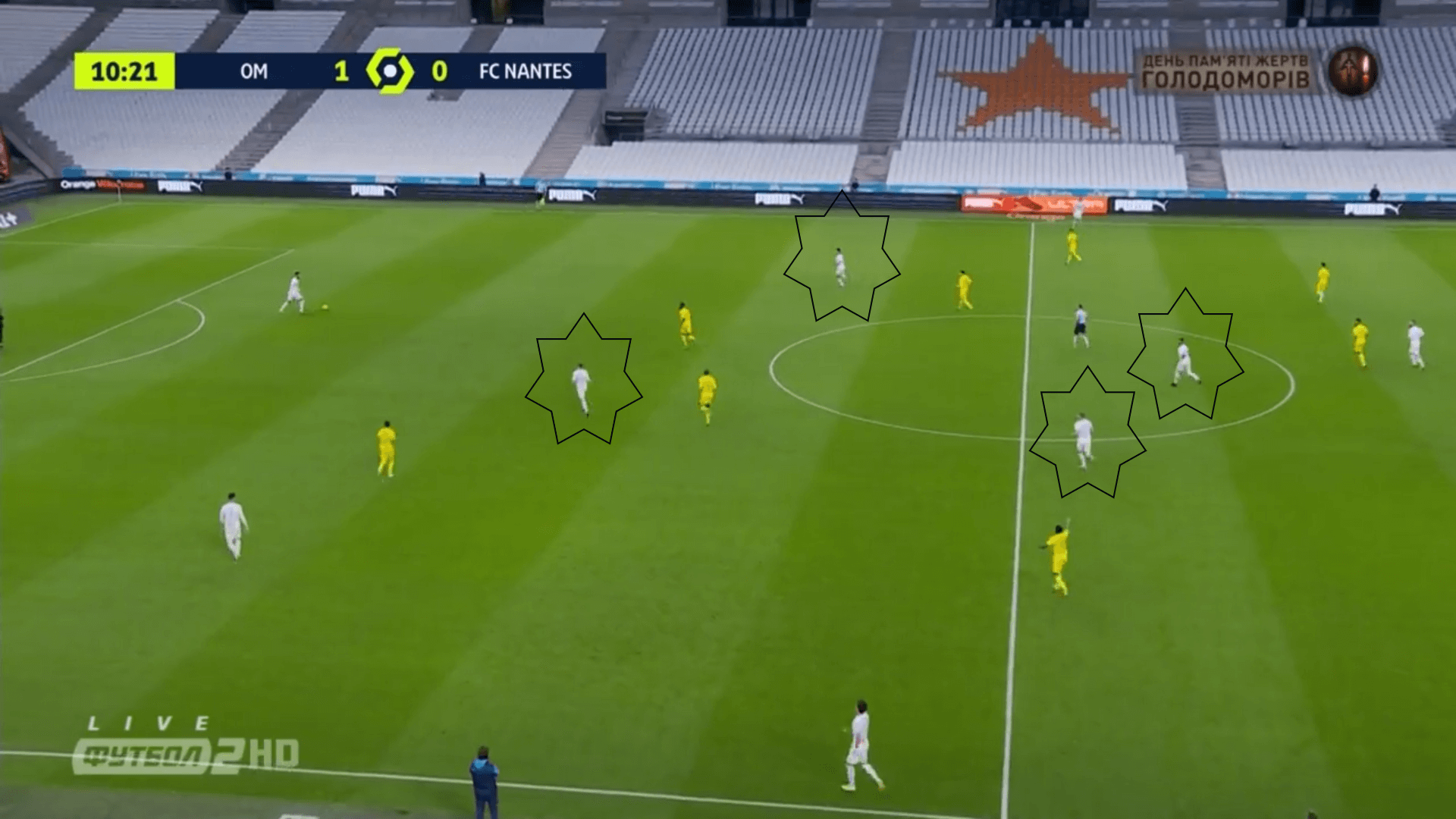 There were also times when Marseille were having more trouble building up and so these two players that were in between lines would come deeper to help out. This, in turn, created superiority for Marseille in the build-up as Marseille would have the back four, the two pivots, the left-winger, and the attacking midfielder helping. This is compared to the two strikers and midfield of four that Nantes brought up. Of course, Nantes could move up their defensive line once again to be more compact and leave fewer spaces in the build-up but through this, they would be more vulnerable to long balls. With a long ball, in this case, Marseille would have a lot of space to run into.

In the image below, it is clear how Marseille are in superiority and this makes some Nantes players have two players to mark. For example, the Nantes midfielder has to decide if he wants to press the Marseille midfielder or the left-winger. If he decides to be in between them and a pass is made to one of them, if Marseille play it quickly, they could easily get past this pressure. 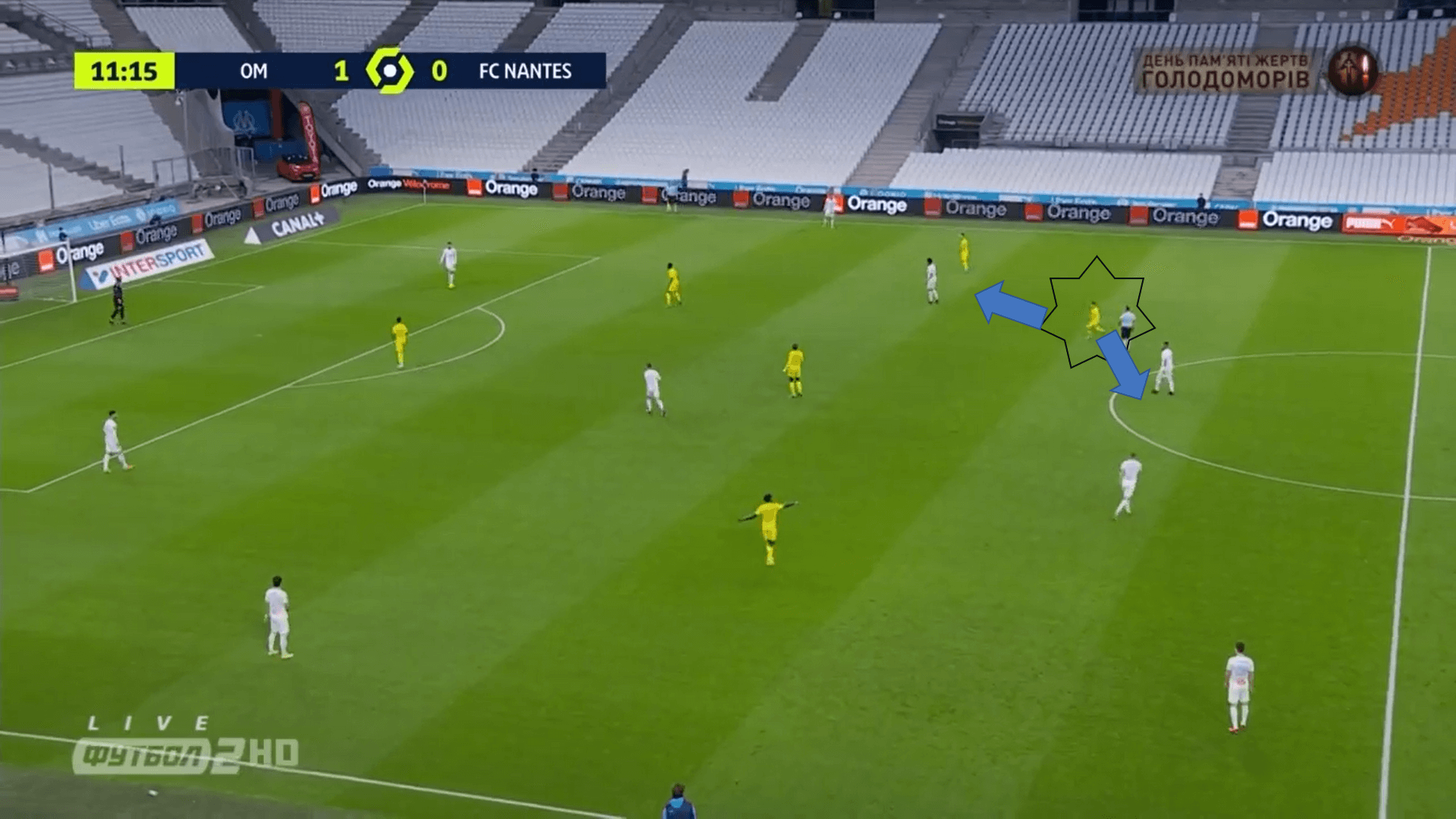 Moreover, sometimes Marseille also made their full-backs go higher up. This made the Nantes winger that was defending them go back to mark him. Therefore, it left more space for the Marseille centre-backs to drive the ball with. This mixed in with the fact that Marseille were mostly in superiority made the centre-backs come up with the ball into the space and then find a teammate.

As in the image below, the left centre-back receives the ball and goes up with it in the space he has in front. Since the striker is more concentrated on him not passing it through the middle, he is leaving the side more open. The centre-back will then move up and attract the striker to him, to then pass it into the middle, getting rid of the initial pressure. 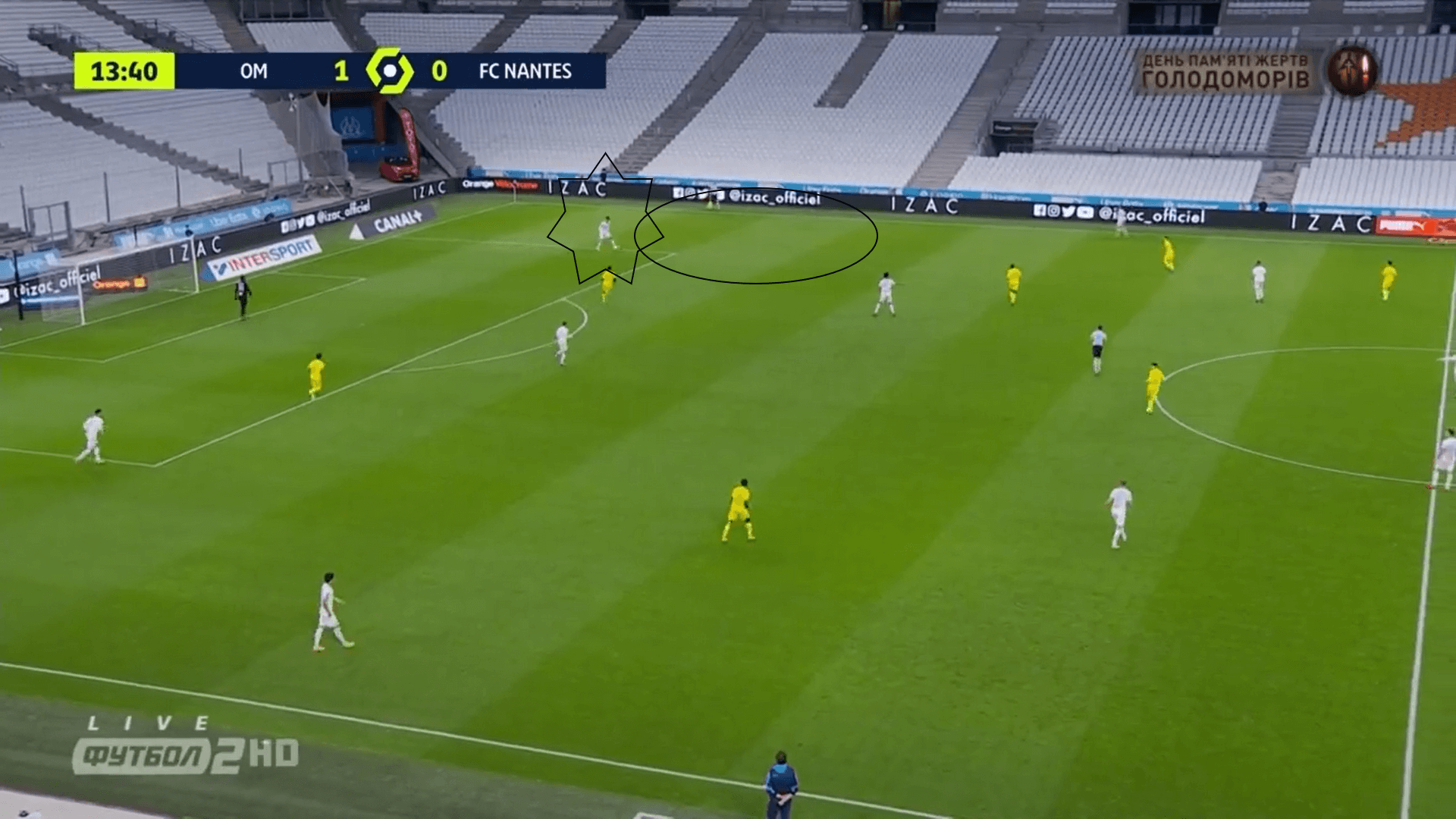 However, there were times when they did position themselves well. In the example below, Marseille have a superiority overall in the build-up, but Nantes is making them play in the area where they are equal in numbers. By having the strikers pressure from an angle where they avoid them switching the ball, it makes the centre-back have to pass the ball in that specific area. 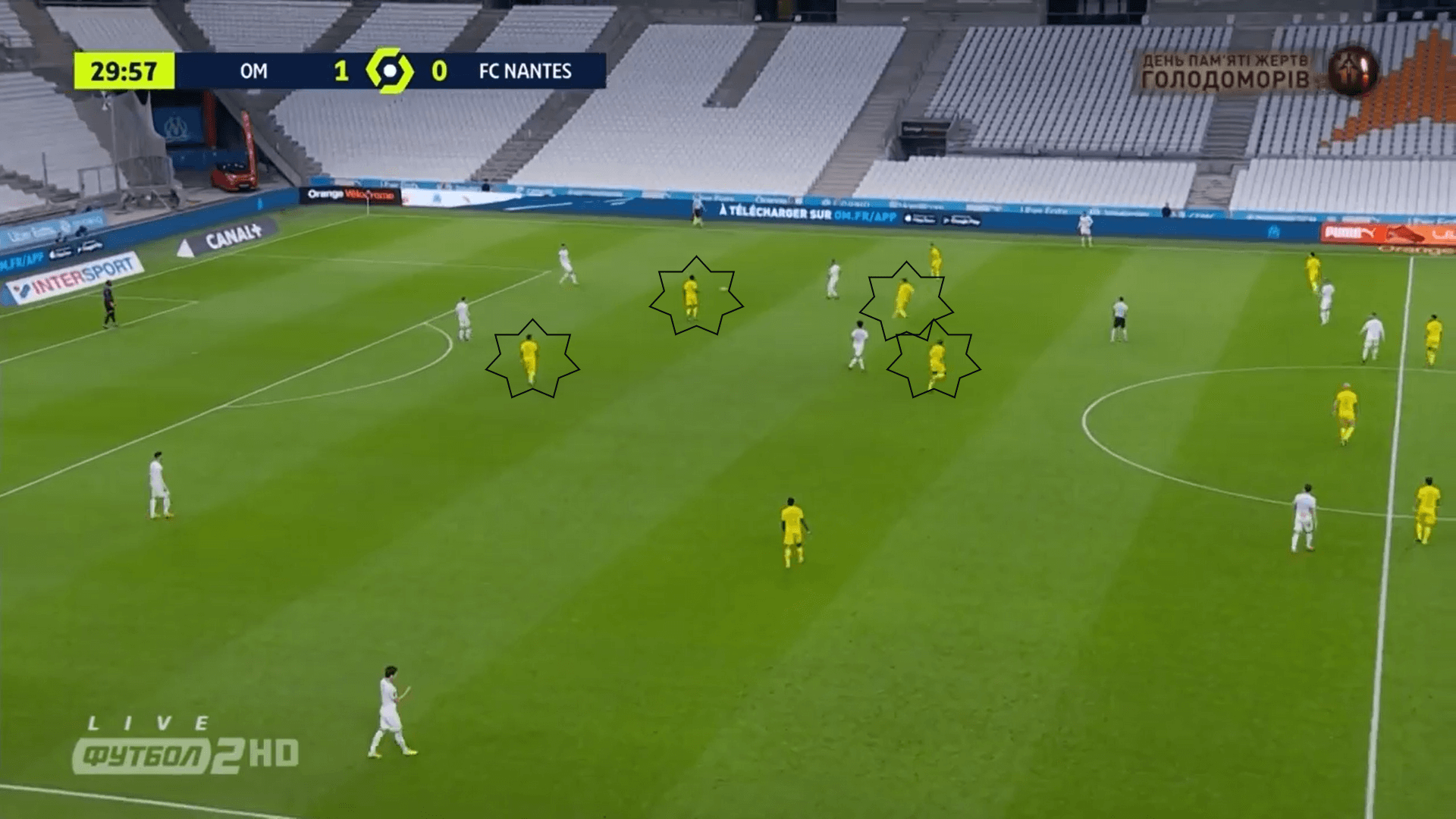 We can see that the two forwards are trying to defend a 3vs2 situation, but the midfield line is not helping. 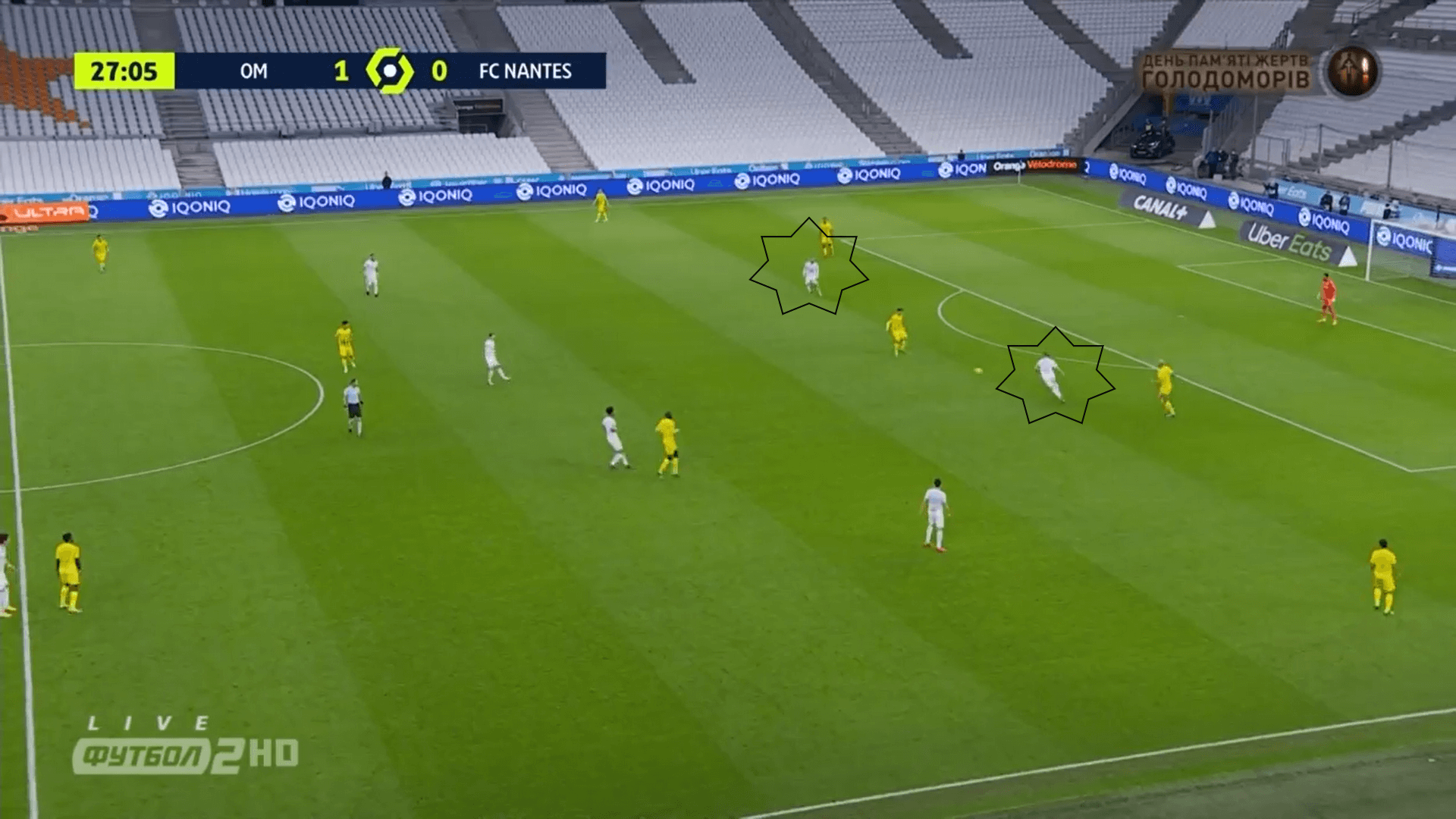 Nonetheless, they pressed more in the second half, when they were winning in the game and settled in. They pressed at this time because it is when Nantes wanted more of the ball to try to score and Marseille did not want to just sit back and defend. Instead, they pressed higher up to not give Nantes a chance of coming back in the game.

The image below serves as an example of what they did in the second half. Marseille aimed to focus the play in one side and then various movements would happen. One of the strikers would pressure the centre-back from an angle and protecting the middle. This would make him have to pass it to a full-back.

Therefore, when the Nantes full-back received the ball, he would immediately be pressed with no close passing options nearby. Thus, the chances of him losing the ball would increase by a lot. 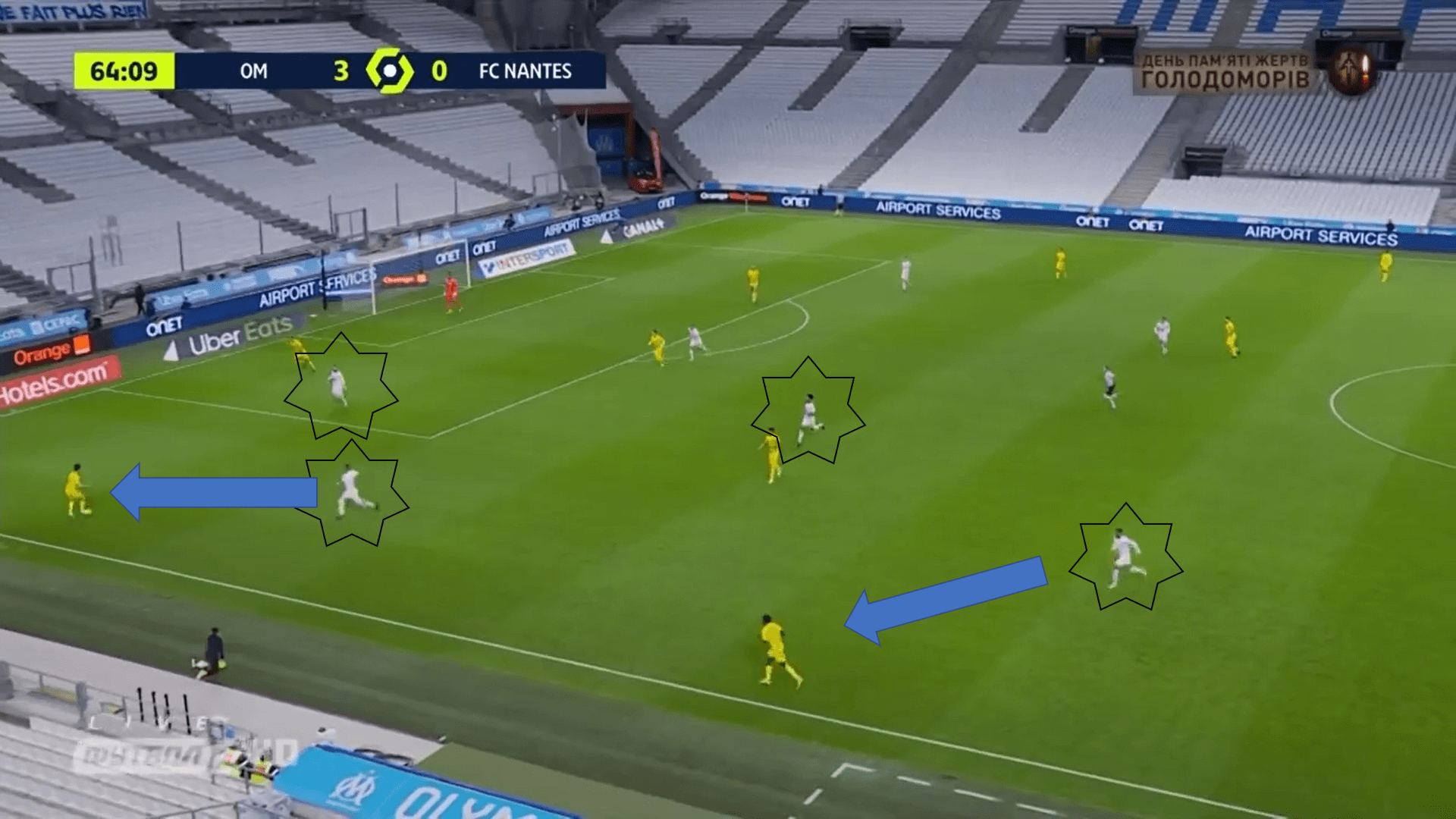 They kept on pressuring high and intensely until the end of the game. In order to not let Nantes have the ownership of the ball in their search for a goal, Marseille made sure not to make it easy for them. This tactic is better than to sit back in a low block and defend the result, especially when the opponent is inferior.

In fact, they recovered the ball high up the pitch a couple of times. For example, in the image below where the Marseille midfielder beats the Nantes midfielder to the ball, and it was the 82nd minute. 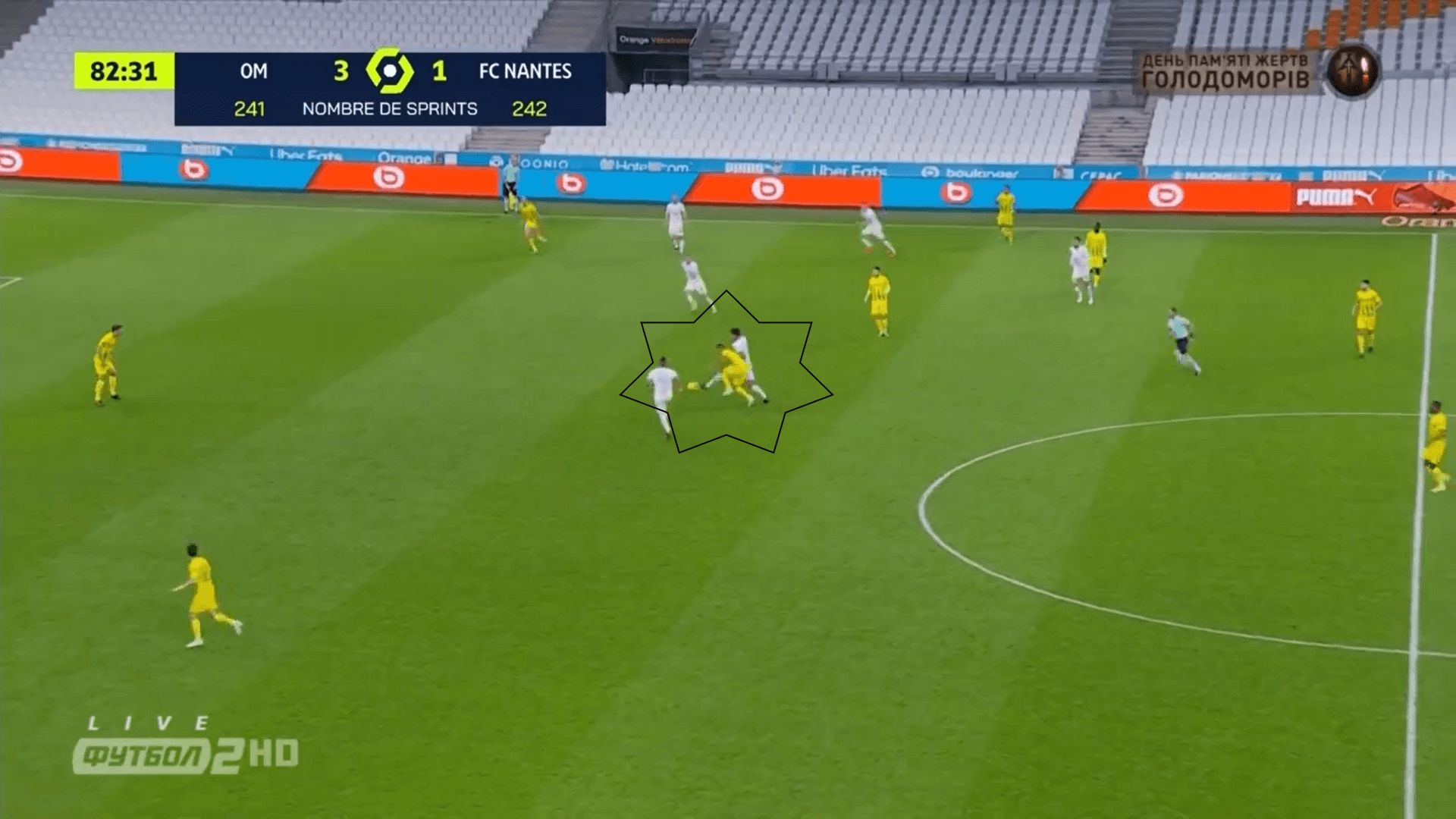 Marseille were the dominant team in the game, especially in the first half. But it is important to mention how Nantes that was inferior, tried to create danger against Marseille. Their attacking play mainly consisted in using the wings.

The first method they used was concentrating the play in one area and then switching the ball. By doing so, they attracted many Marseille players to where they wanted and when they felt they could not do anything more, they switched the ball to the winger or full-back that would be wide on the other side.

For example, in the image below they have just progressed through the left side and the midfielder saw that they could not advance there anymore. So he just switches it to the right-winger who is alone and in space for him to generate danger through there. 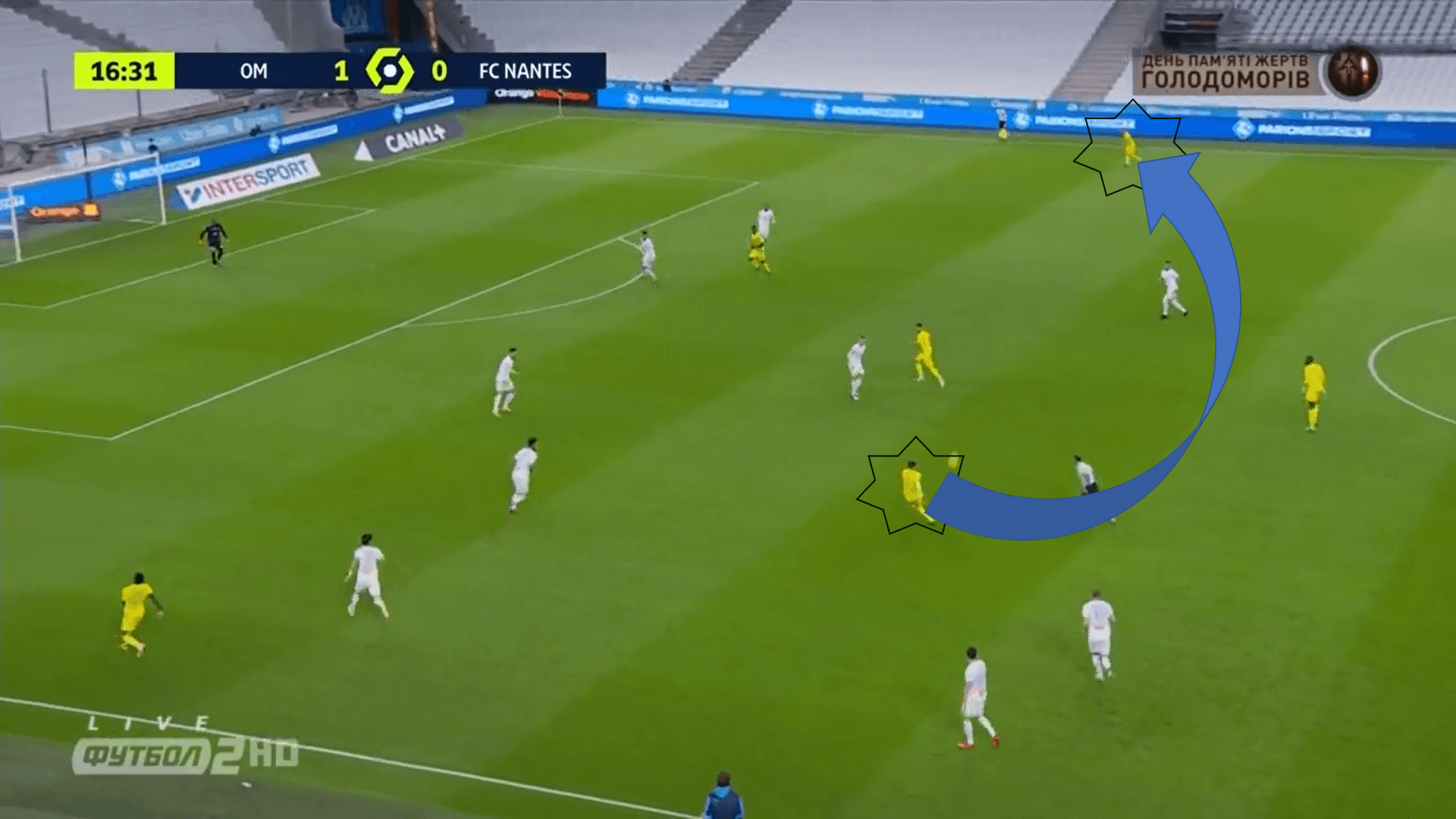 Furthermore, in the build-up, they sometimes relied on long balls to play the ball out. Since their striker is quick but also physically strong, they could either make a through ball for him to run into or look for him to combat the ball in the air.

In the example below, the Nantes left-winger had come down to receive the ball in the build-up and brought the Marseille right-back with him. The striker takes advantage of this new space and runs into it. 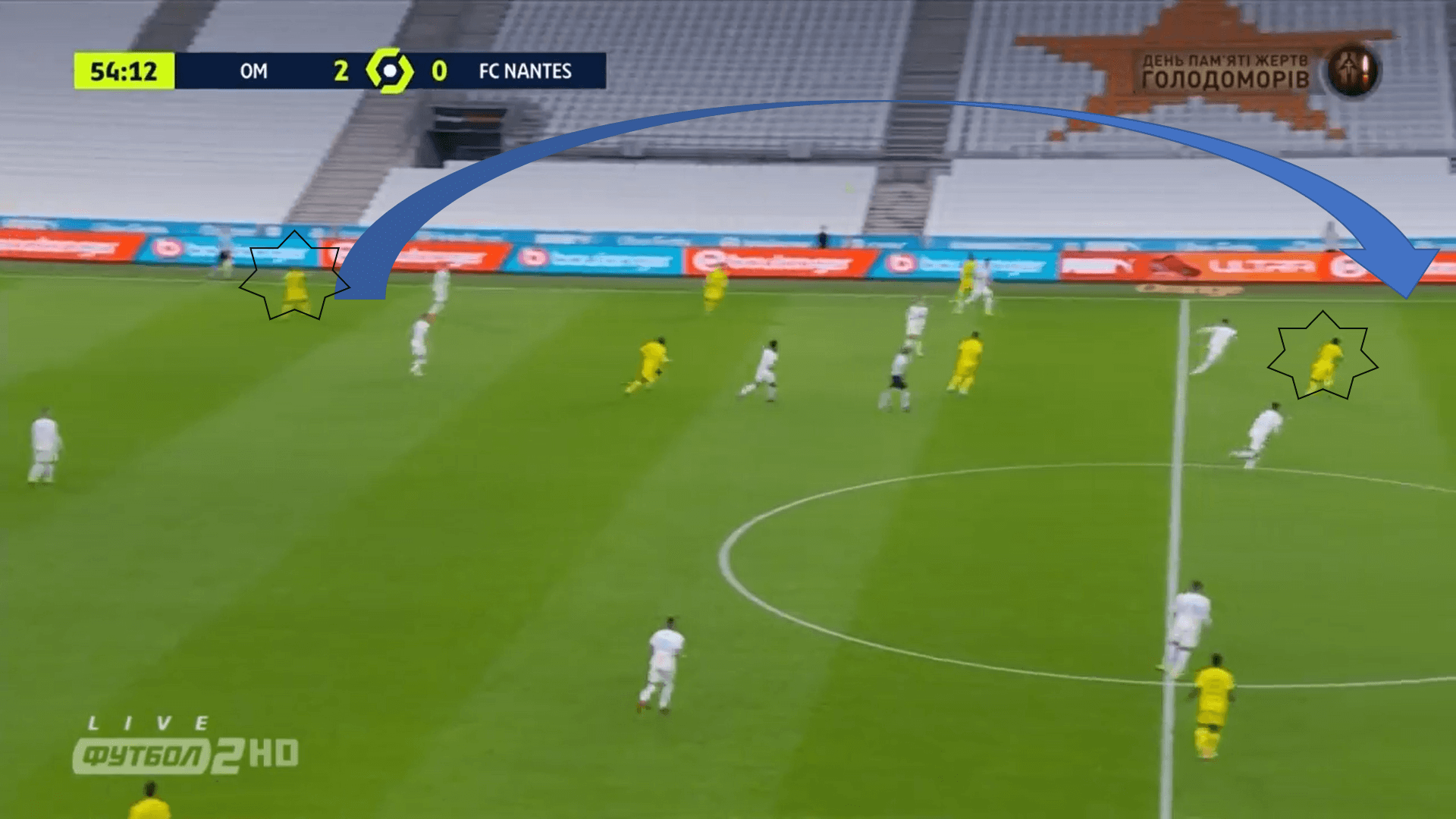 Lastly, they were also continuously looking for their left-winger to be in a 1vs1 situation to create danger from the wing. Both the starting left-winger and the substitute one who came on are quick players with ability.

This way, if the wingers got past their marker, they would be in a really dangerous situation to shoot or put a good cross in. One way they did it was by making long balls into these players so that it was quick and the other Marseille players would not be able to go help.

This is shown below, with the winger moving wide instead of towards goal, to be able to control and immediately face the right-back to get past him. 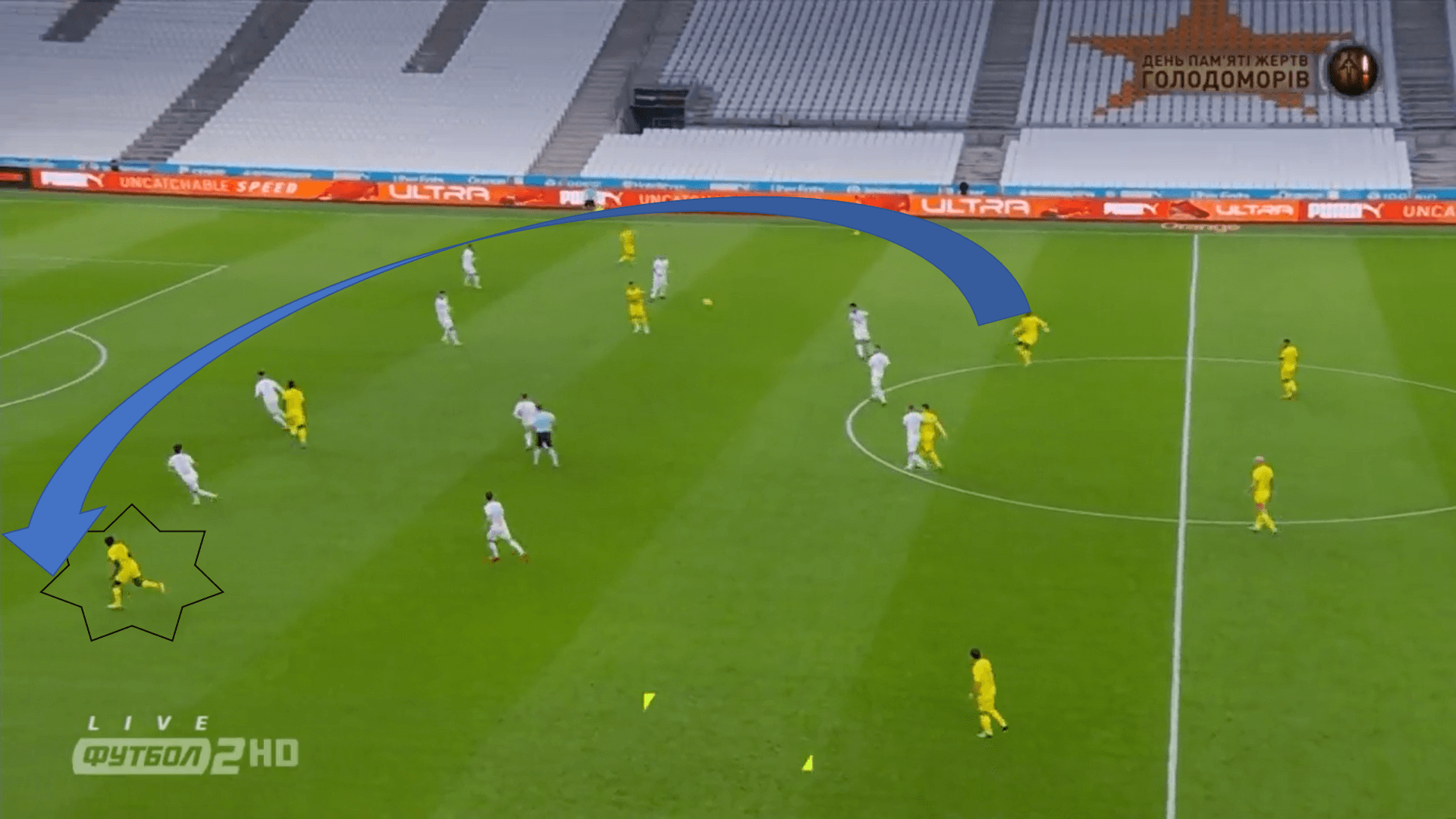 Overall, Marseille were superior and even when they were winning, they still kept pressuring high to not give Nantes a chance. The Marseille pressure was much more effective than the Nantes one as Marseille brought in more players for the build-up and therefore created superiorities. The ways Nantes tried to create danger was by switching the ball to the other wing to catch Marseille by surprise and with long balls, among others. Marseille needs to keep this winning streak in the league to make up for the bad performance in the UEFA Champions League.