Marseille came into this game having suffered a tough 3-0 defeat against Porto. So far, they have not won any games in the UEFA Champions League, as before they had also lost 0-3 against Manchester City. However, in Ligue 1, they had won two and drawn one of their last three games, showing some positive performances in the league. Right now, they sit in fourth place.

On the other hand, Strasbourg is suffering in the league. They have won one and lost two of their three previous games. They now sit in the nineteenth place, two points below the places that would keep them in Ligue 1. As they showed in this game, they have a competitive team, but the results are just not coming yet.

The game ended in a 0-1 win for Marseille, who did not do much to win the game. Strasbourg played well and competed throughout the game, sometimes even dominating possession. It is true that not many chances occurred for both teams, but it was Strasbourg who seemed on top in terms of intensity and play. 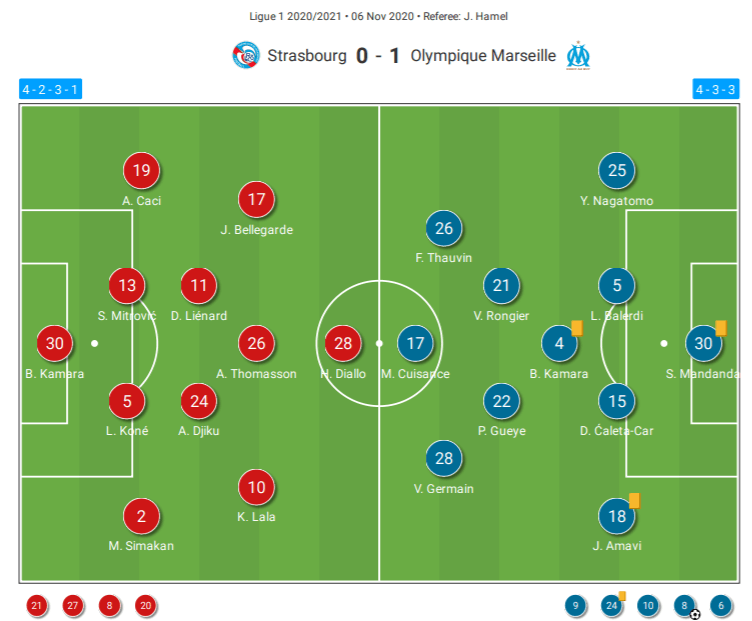 The home team played in a 4-2-3-1 formation, with Habib Diallo leading the attack. Behind him were Adrien Thomasson as attacking midfielder and Kenny Lala and Jean-Ricner Bellegarde as wingers. The double-pivot was formed by Alexander Djiku and Dimitri Liénard. Lastly, the back four was made up of Anthony Caci, Stefan Mitrović, Lamine Koné, and Mohamed Simakan.

Marseille played in a 4-3-3 with Valère Germain, Michaël Cuisance, and Florian Thauvin in the attack. The three midfielders were Pape Gueye, Boubacar Kamara, Valentin Rongier. Then, the full-backs were Jordan Amavi and Yuto Nagatomo, along with Duje Ćaleta-Car and Leonardo Balerdi as centre-backs.

Whenever a team has three midfielders, you know they are probably going to want to build-up from behind. Strasbourg knew this but decided not to press that high. Instead of going high to press the centre-backs, they focused more on making sure that the Marseille midfielders did not get it.

Therefore, they set their team in a medium block and only started pressing once a midfielder had received it or once the pass was being made to one. As we can see below, the attacking midfielder has joined the striker to basically become another striker. That made the two pivots come up and would essentially create a 4-4-2 when pressing.

The front two let the centre-backs to pass all they wanted. It was only when a pass was made inside or to a full-back that they would press. This strategy is not that tiring and so allowed Strasbourg to be intense once a more dangerous pass was made throughout the game. 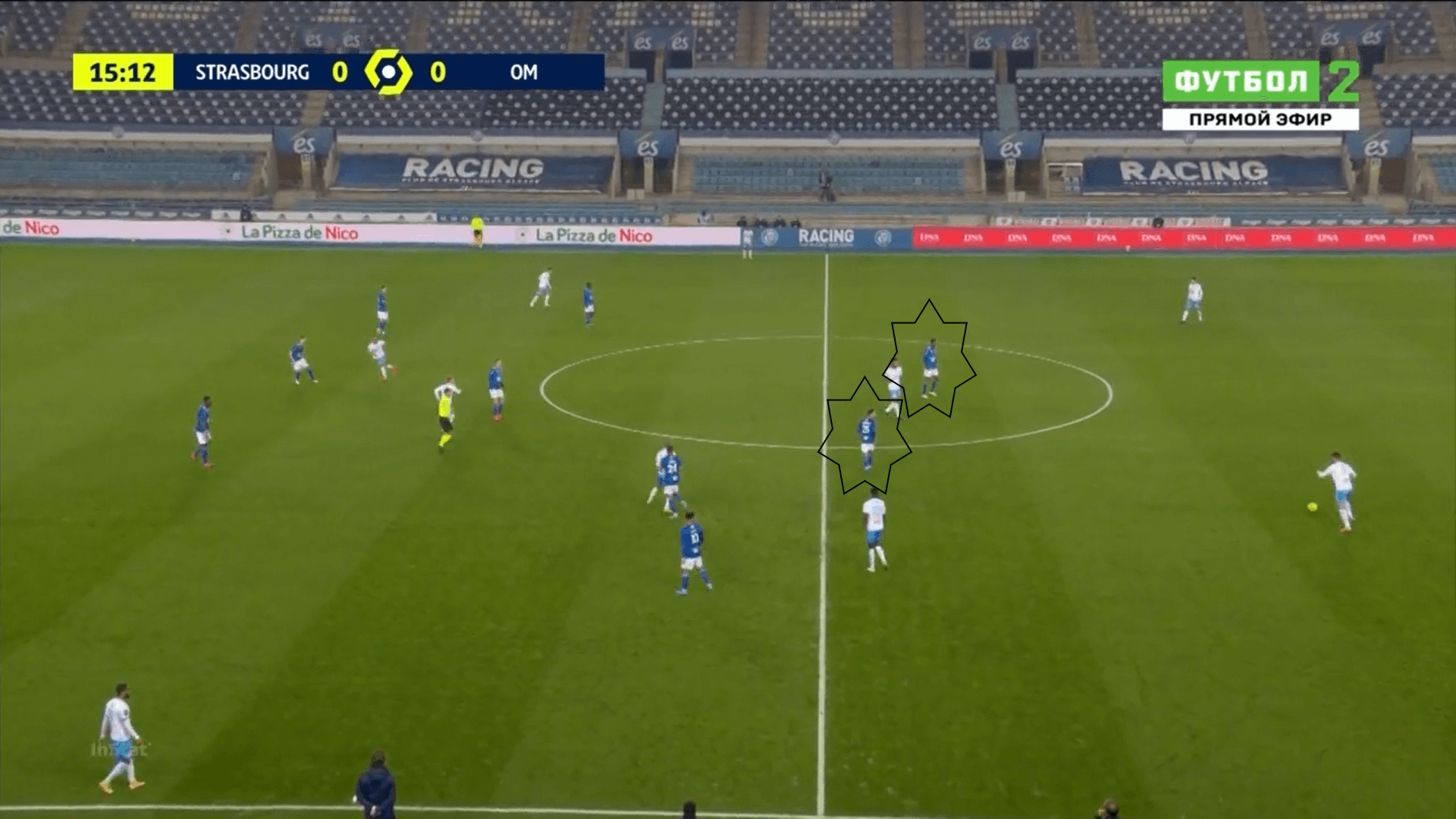 They also carried this out because to do so successfully, the team needs to be compact and have the lines close to each other. Therefore, the one time they did this higher up the pitch and also started pressuring the centre-backs, the team was unorganised. This left a Marseille midfielder free which dismantled the pressure, as seen below. They never did this high pressure again after that. 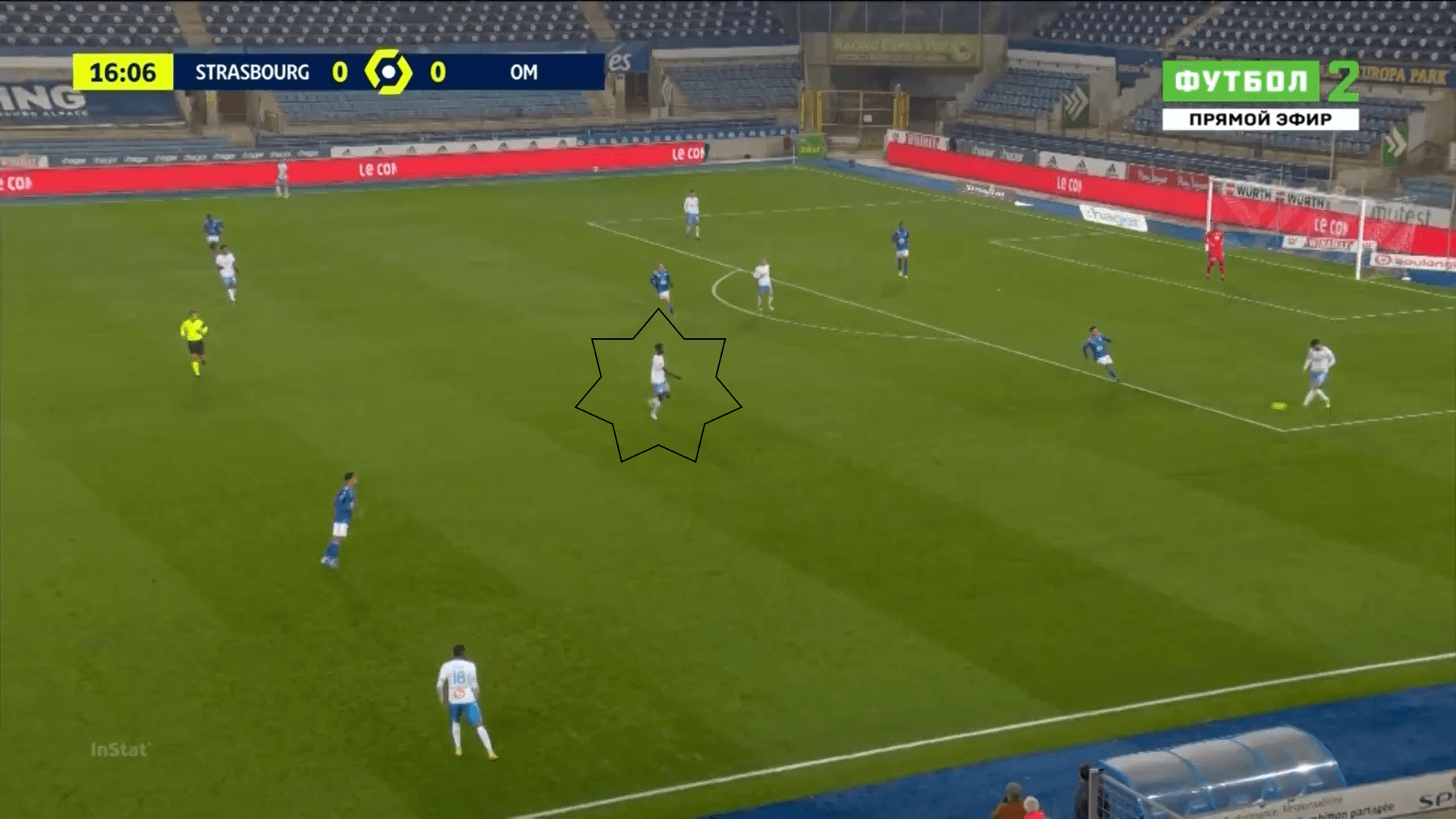 Marseille made the defensive midfielder drop down to help the centre-backs. This was probably done to draw one of the strikers to him and so then play the ball around him while breaking the first line of pressure. However, the front two still did not go to press the midfielder that dropped down and let him pass the ball with the centre-backs. 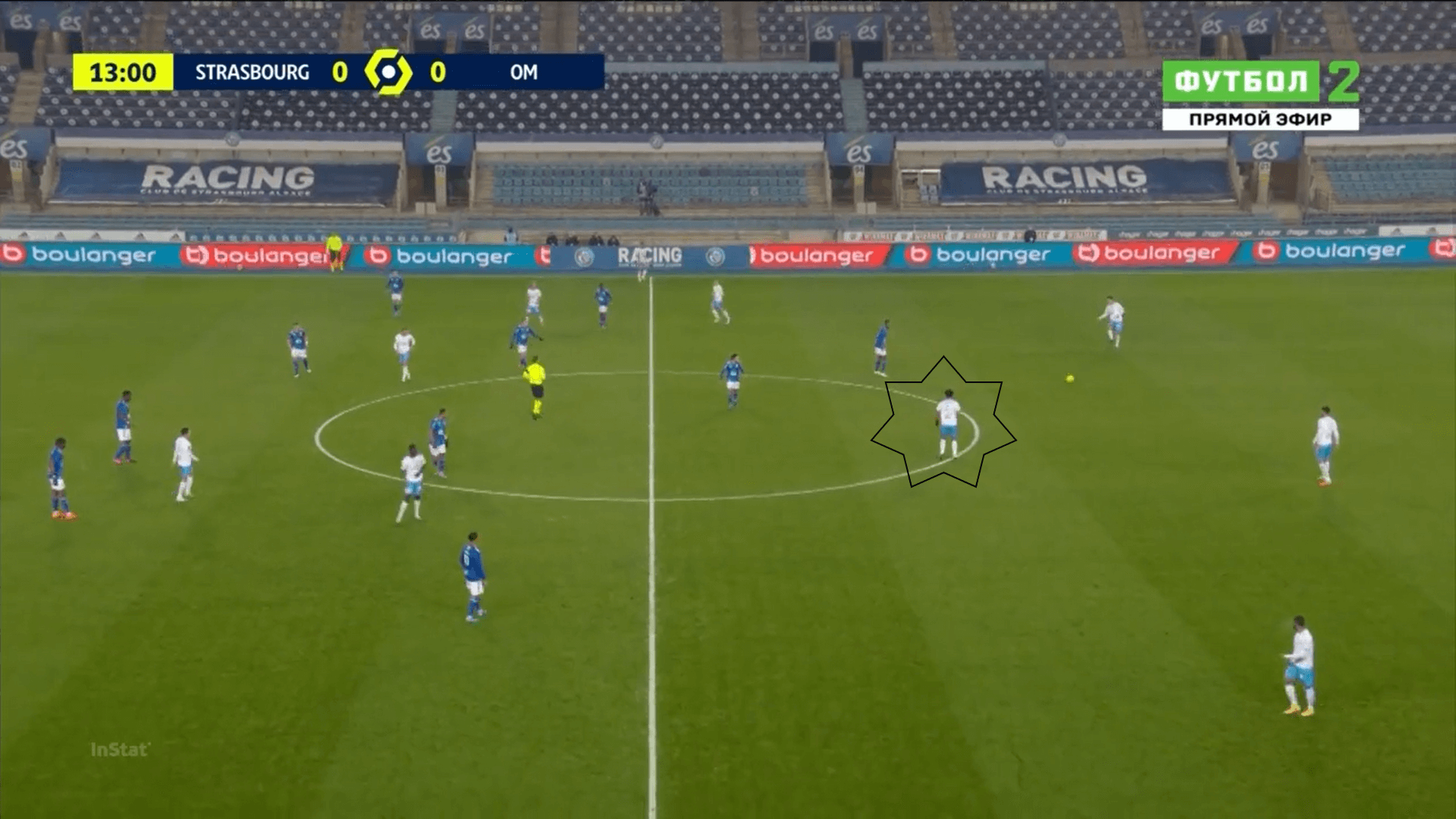 Even though Strasbourg are less about playing the ball from behind, Marseille still decided to press high to make sure this did not happen. When pressing, they would go into a 4-3-1-2 formation, which is what they usually play in.

The striker and one of the wingers would press the two centre-backs and the other winger would mark the midfielder who would come to help. This would leave no wingers to mark the full-backs. Therefore, if the centre-back played a long ball to a full-back, the closest midfielder would have to run and press. 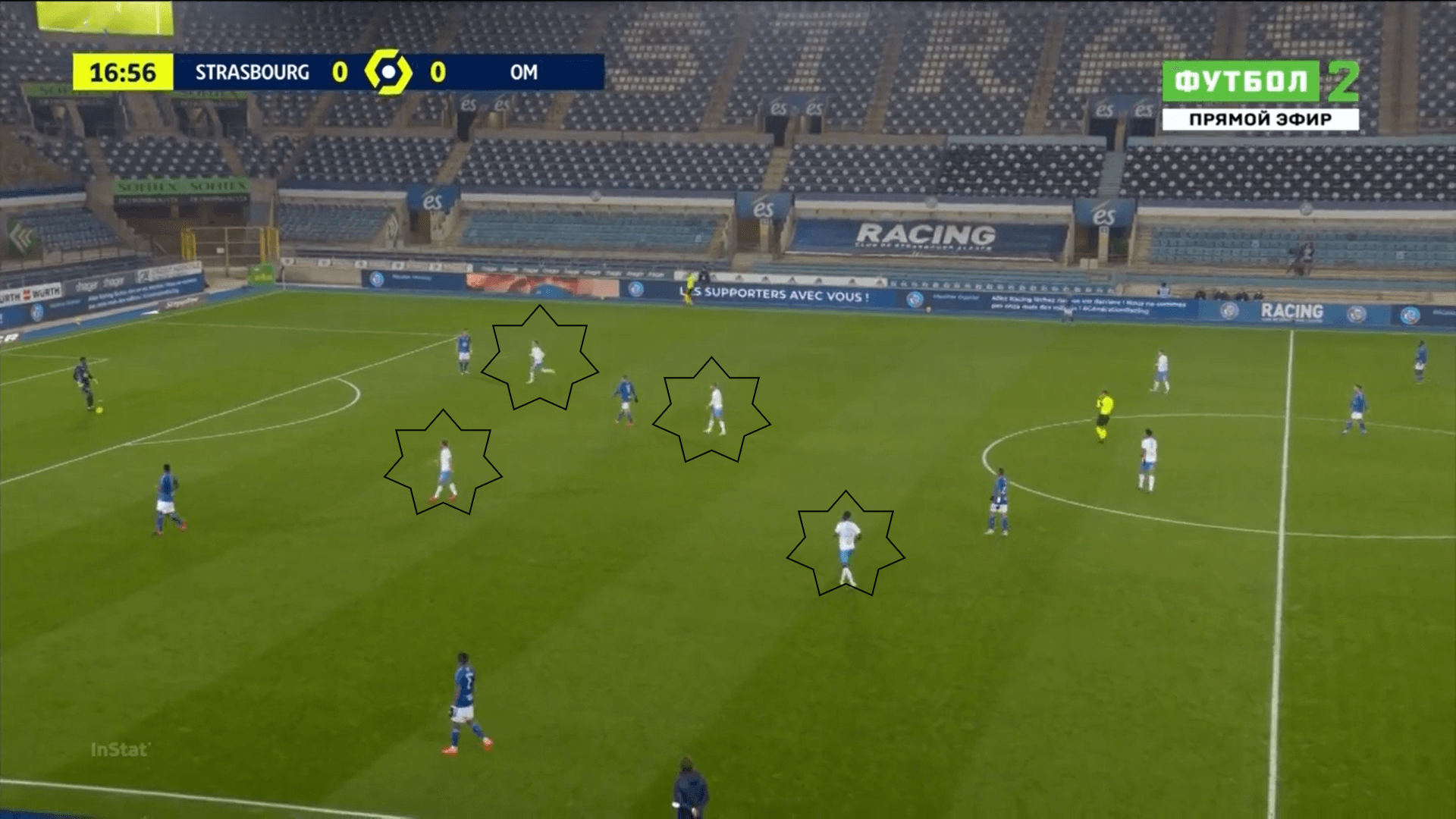 Being the inferior team, Strasbourg needed to rely on their strengths to create danger. They had a couple of ways to do this. The first method was on the wings. The Marseille wingers rarely came back to defend, which meant that by moving their full-back up, they would normally have superiorities on the wing.

Also, it meant that they always had the option of switching the ball to the other full-back who would be alone. Strasbourg would focus the play on one side and when they feel that it is too congested, they switch it to the full-back in space, as seen below. The Strasbourg right-winger has specifically moved inside for this to happen and to give the full-back even more space. 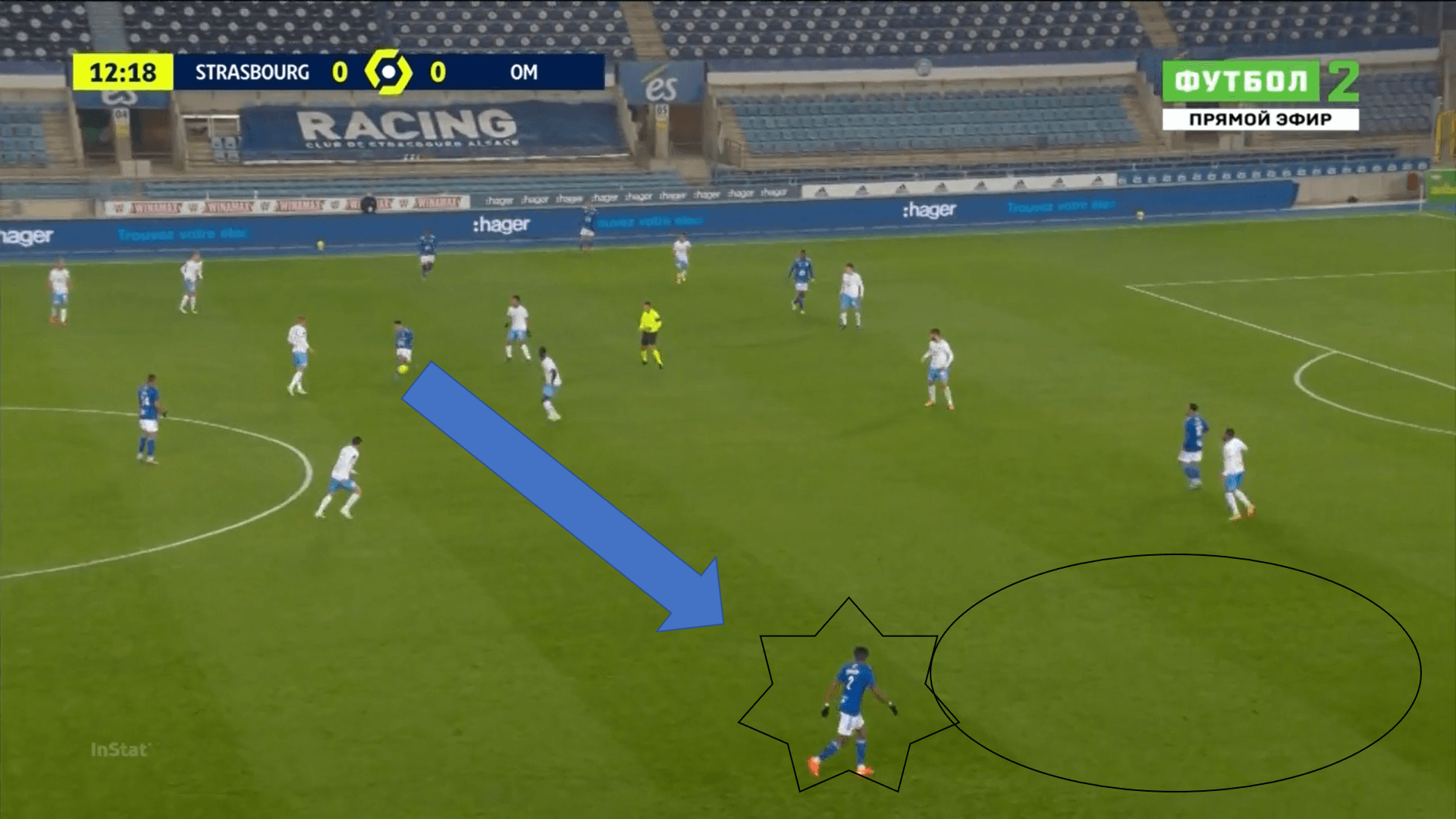 Connected to this is one of the main ways they created danger in the first half. It seemed that for them, the right-hand side was the one that carried the most threat and directed most of their attacks through here. With the arrival of their full-back, it meant a 2 vs 1 situation against the Marseille full-back most of the time.

This would be great as they could then get crosses in. For example, in the image below, the Marseille full-back has to decide whether to mark the winger on the ball or the full-back making a run. The winger takes advantage of this hesitance and gets a cross in.

Because the wingers don’t come and defend, the closest Marseille midfielder has to come and support. However, as seen below, he arrived late and is behind the winger. That is why superiority was created.

This made the midfielders very tired as they had to protect the middle and also go and support the wings. Over the course of the match, they would go to support more and more tired, which gave the Strasbourg players on the wing more time to decide. 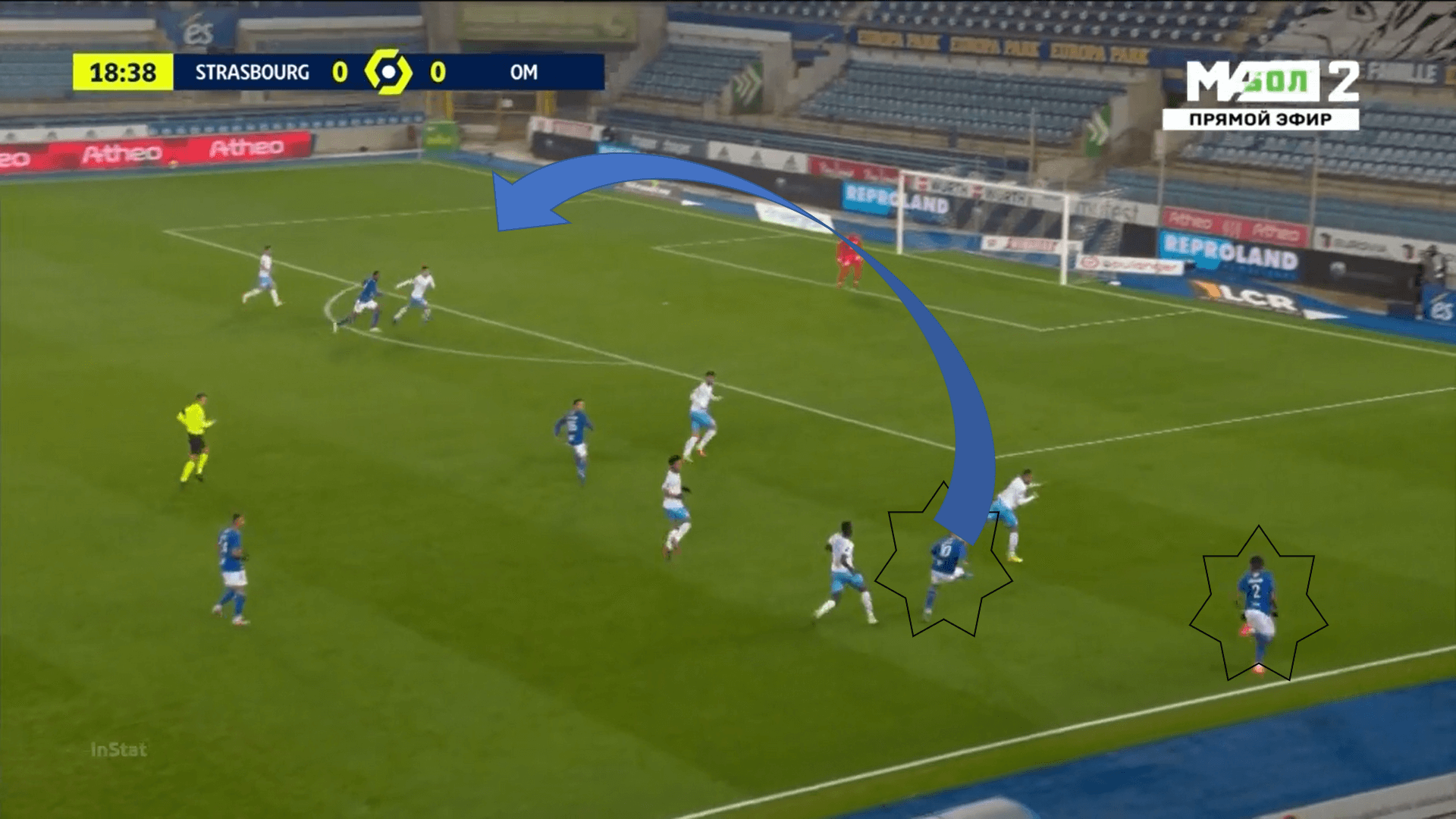 Meanwhile, the other Strasbourg players knew that a cross was likely to come in due to their superiority in the wing. Therefore, they went into the box with numbers to increase the chances of finishing the cross.

In the image below, the striker is already in the box. Behind him, the left-winger and the attacking midfielder are also going in. It would essentially be a 3 vs 2 situation in the box in favour of Strasbourg if they got the cross in. 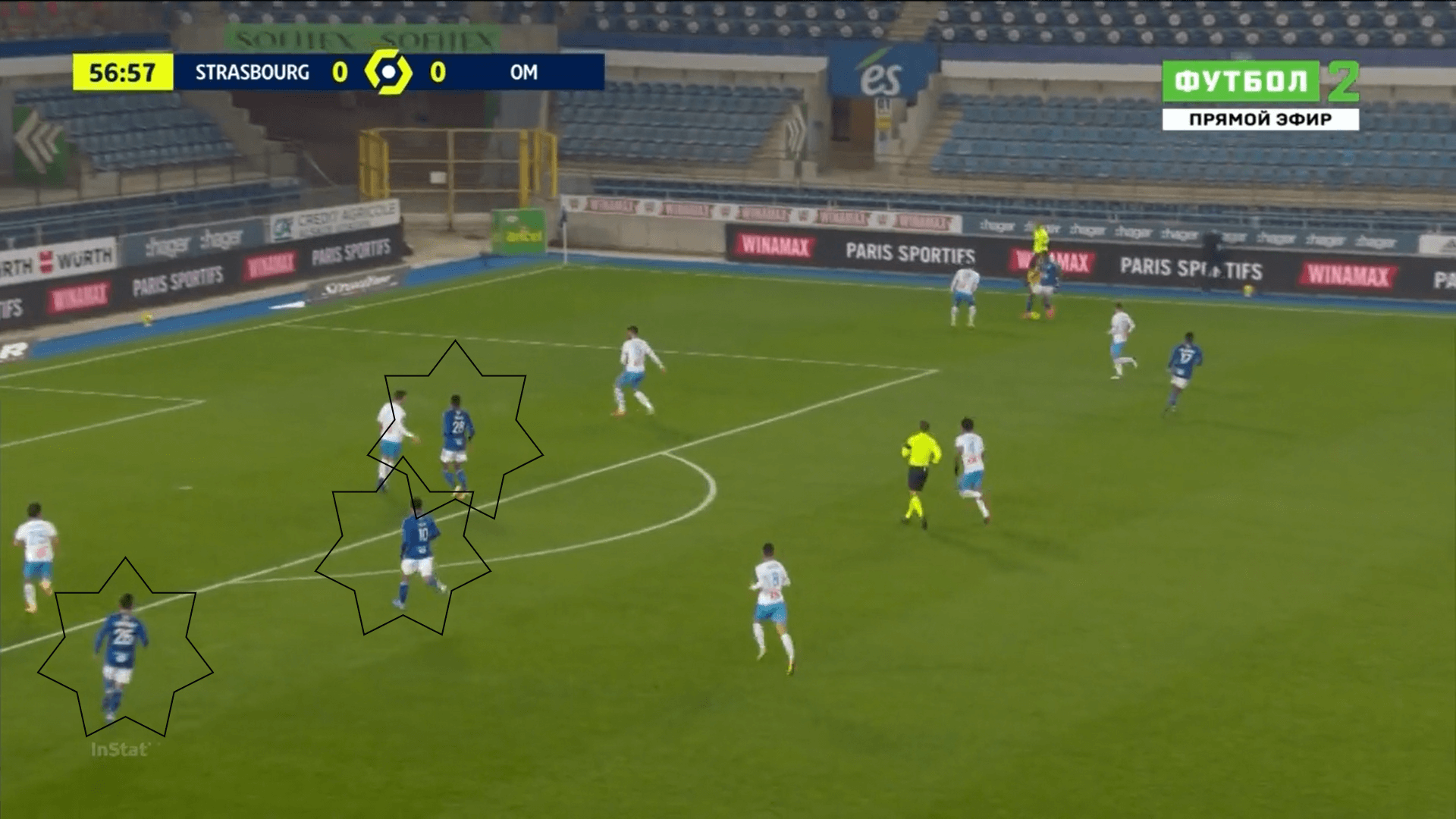 Moreover, they heavily relied on passes behind the defence for the wingers. Since their attackers are fast, they take advantage of this and send balls between the centre-backs and the full-backs to split them. This was also part of their build-up as when they did not see a close viable option, they would check if one of the attackers was making a run.

They were actually quite effective as many of them were successful in reaching the receiver of the pass. Also, since they have less technical ability to carry out a good build-up, this was great to create danger from the defence. It also took the Marseille defence by surprise a couple of times.

In the image below, we see how the winger has an advantage over the defender that is also running to the ball. Had it not been for the Marseille goalkeeper who had to come out and clear the ball, Strasbourg would have had a very good opportunity. 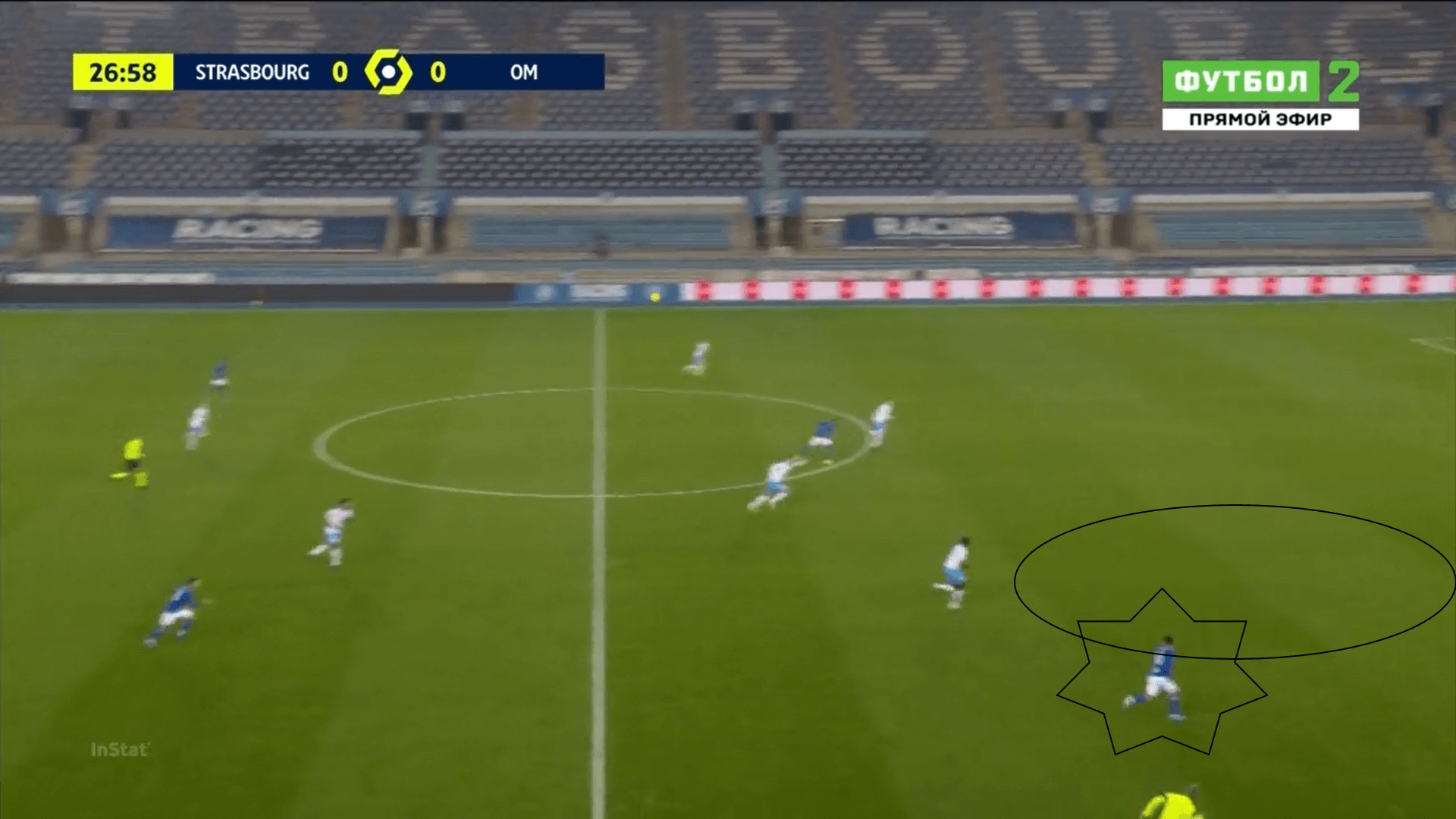 The Strasbourg striker is a tall and powerful player. This makes their team try to constantly reach him for him to contest the ball, control it, or head it to another teammate. He was the go-to player when they doubted what to do.

Furthermore, the Strasbourg players would all get close to him for the rebounds as he was normally fighting against a defender to win the aerial duel. In the image below, it is clear that there are four players close to him, forming a square and this was done to be in every area that the ball might go to. 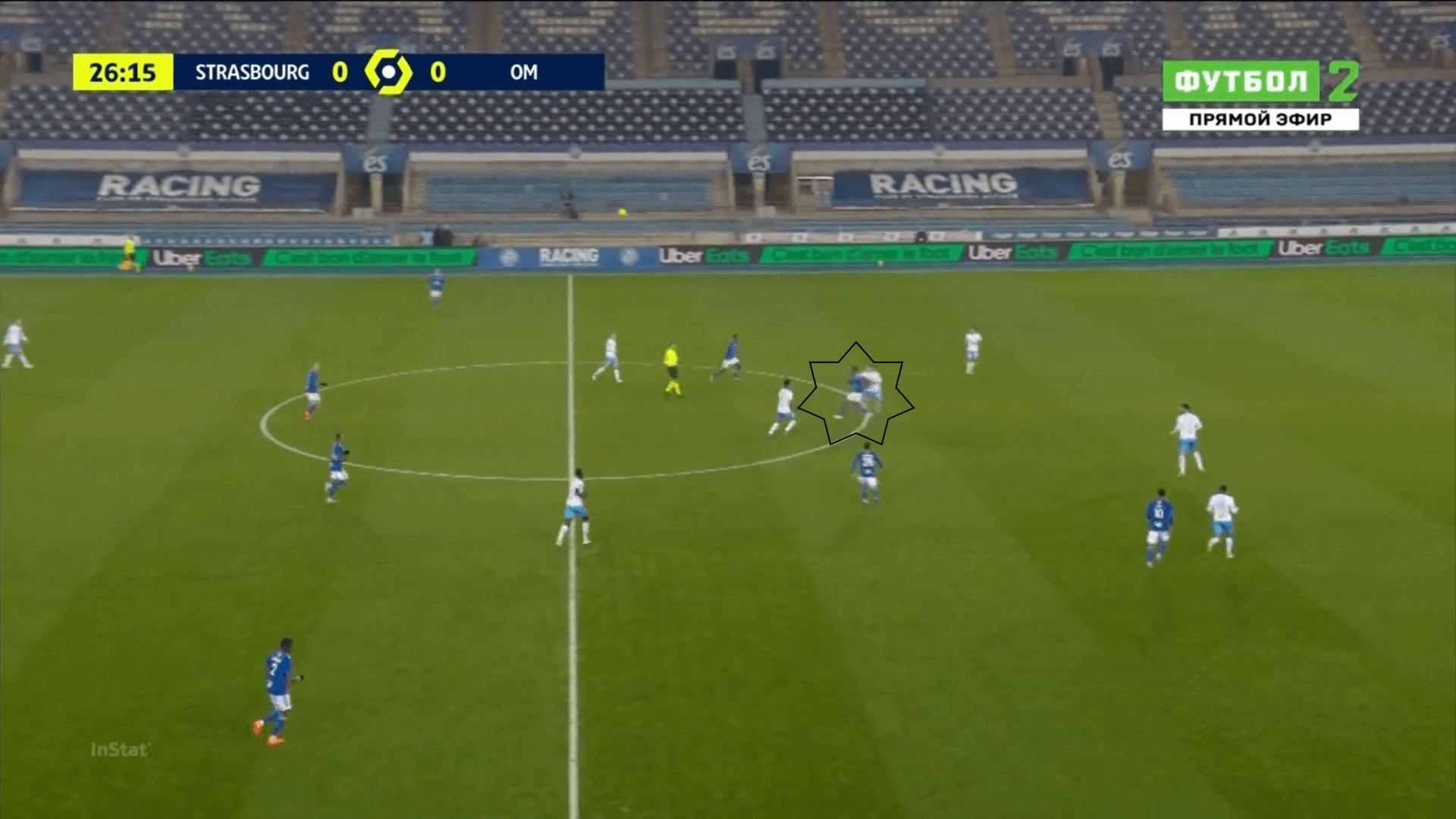 All these strategies show that Strasbourg was employing a direct method of football that relied on long balls, crosses, and playing on the wing.

Even though Marseille tried to build-up more, they still played long balls behind the defence. Specifically, because Strasbourg was expecting them to play the ball out, they would make these passes to surprise their defence and it worked a couple of times.

This would give Marseille different options to use when attacking as they could decide whether to play the ball out calmly or to be more direct. This unpredictability made Strasbourg defenders hesitate in going higher up and this benefitted the players who were in between lines as the defenders would not be as close as before. 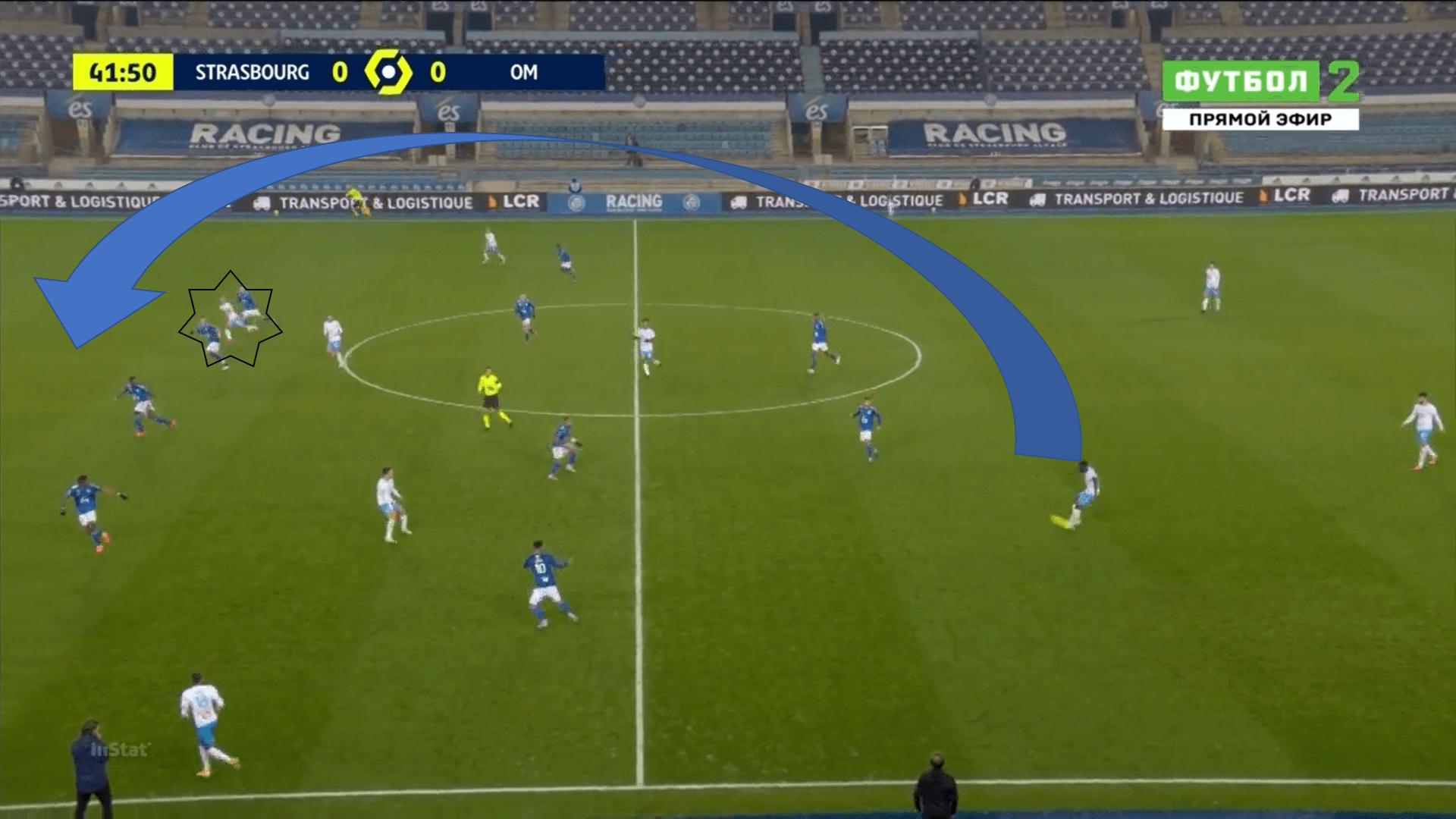 Marseille’s wingers would not really act as wingers. They would go inside and even drop down to help while letting the full-back go higher up. Making the wingers come inside made Strasbourg not expect the attack to come through the wings. However, Marseille had very attacking full-backs.

They would try to start playing out from the middle to attract players inside to then quickly pass it to one of the full-backs out wide. The image below is a perfect example as the midfielder passes it to a winger who has come inside. The winger immediately passes it to the full-back who is free out wide.

By making the wingers come inside, they created more space for the full-backs to exploit. 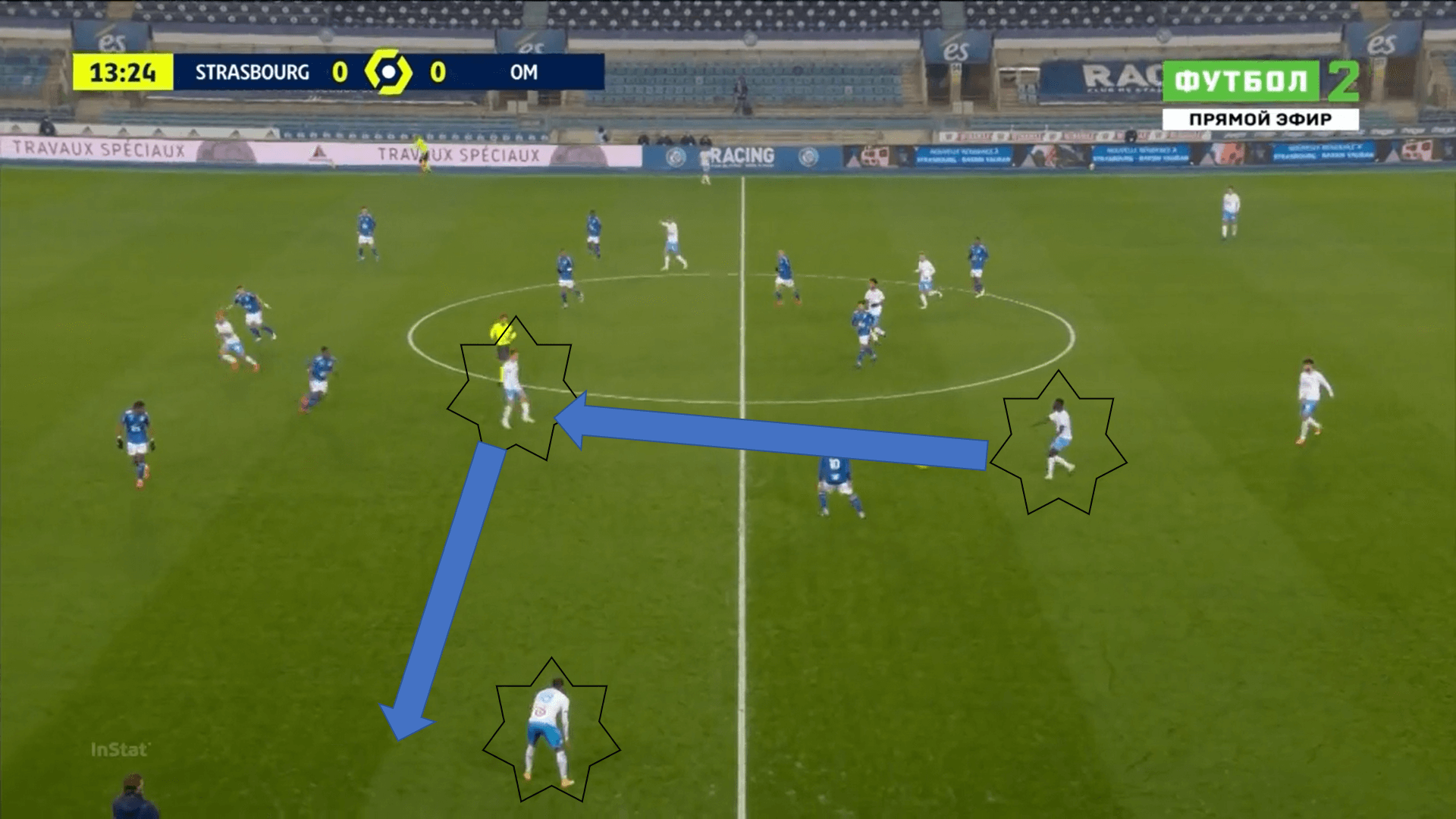 Similar to this, in the second half they carried out something interesting. With the wingers coming inside, Marseille would make their central midfielders run into the spaces that a winger should be in. With them running into these spaces, it is unexpected for the defence as there has usually been no one there the whole game.

In the example below, the right midfielder is making a run on the wing where you would think a winger has to be. This has caught the Strasbourg left-back by surprise who is struggling behind and allowed for the midfielder to get a threatening cross in. 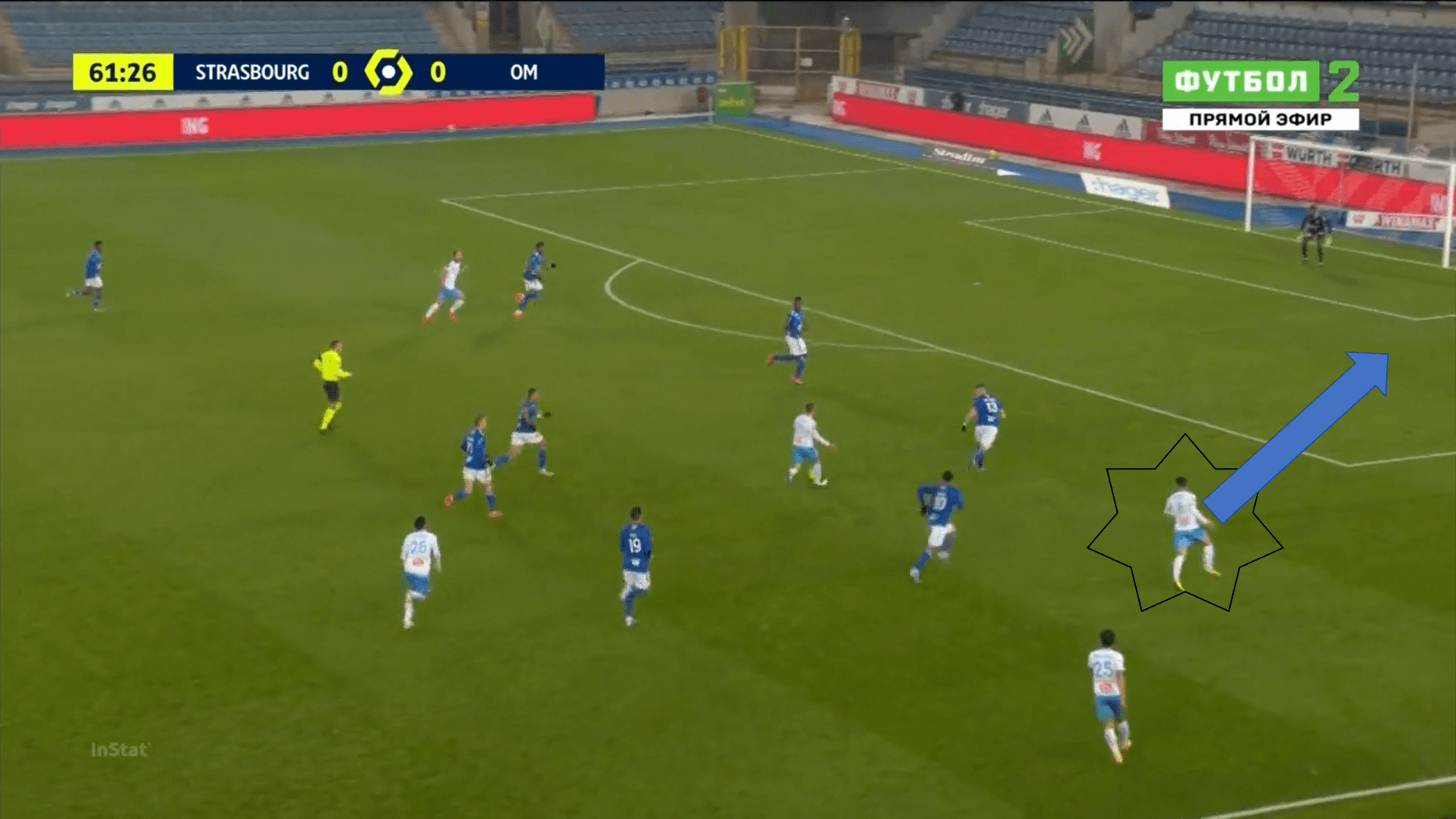 Overall, Strasbourg competed for the whole match and even had control of the game sometimes, which was not to be expected. They used their strengths well such as their tall striker and their superiorities and speed on the wings but could not manage to score. Marseille also surprised by attacking on the wings and putting the wingers inside but did not do enough to win the game. However, it is these types of games that are very important for a team wanting to go high in the league.