An away success in Dortmund is always a big thing, even for the Champions League winners Bayern Munich. At the end of a match worth seeing, FC Bayern celebrated a 3-2 win in the Signal Iduna Park. Bayern remain first in the table, but apparently, Joshua Kimmich sustained a serious knee injury, possibly a cruciate ligament tear. The Dortmund team lost a big game with their coach Lucien Favre, and all attempts at motivation were unsuccessful. BVB had not lacked commitment – Bayern won because of Dortmund´s mistakes by using their superior quality.

The 103rd Bundesliga duel between Dortmund and Bayern was eagerly awaited – and delivered a highly tactical affair in the first few minutes. This analysis will show how Favre changed his tactics in order to beat the German “Rekordmeister”. This tactical analysis will also examine how FC Bayern were able to claim this victory in the end.

While Mats Hummels, Marco Reus, and Jadon Sancho came back into Dortmund´s first eleven, Bayern had to change a lot in their defensive line. In Niklas Süle, Alphonso Davies, and Benjamin Pavard were three starters who were missed due to injuries. Nevertheless, both teams were lined up in their typical 4-2-3-1 formations they had played in the last couple of weeks. 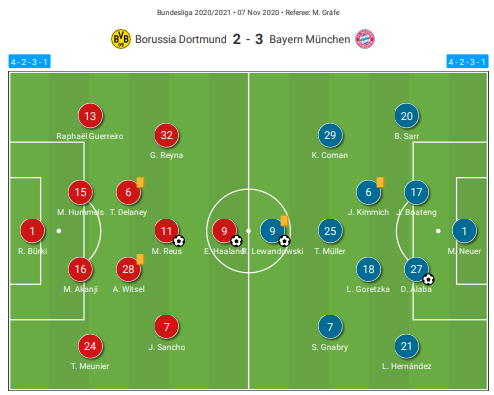 This led to a very tactical start of the match that was completely balanced with lots of possession for both teams (Dortmund: 49% possession, Bayern: 51% possession). In the end, this is also why mistakes from both defences were the decisive factor in a tight match.

Under Favre, Dortmund are known for possession-based football with lots of control and save passes. Mostly, these passes are horizontally played to open up space in the opponent´s defensive line. However, Favre changed his playing philosophy for this match against their biggest rival. In order to be quick in offensive transitions, he allowed his team to play long cross-field passes. By doing so, Dortmund were able to get in behind Bayern´s backline several times in the first half.

In the image below, Thomas Meunier plays the cross-field pass in behind Bayern´s high-staying backline in order to set up Giovanni Reyna. With Reus and Erling Haaland supporting the counter-attack, Dortmund had an offensive 3-vs.-4 situation. 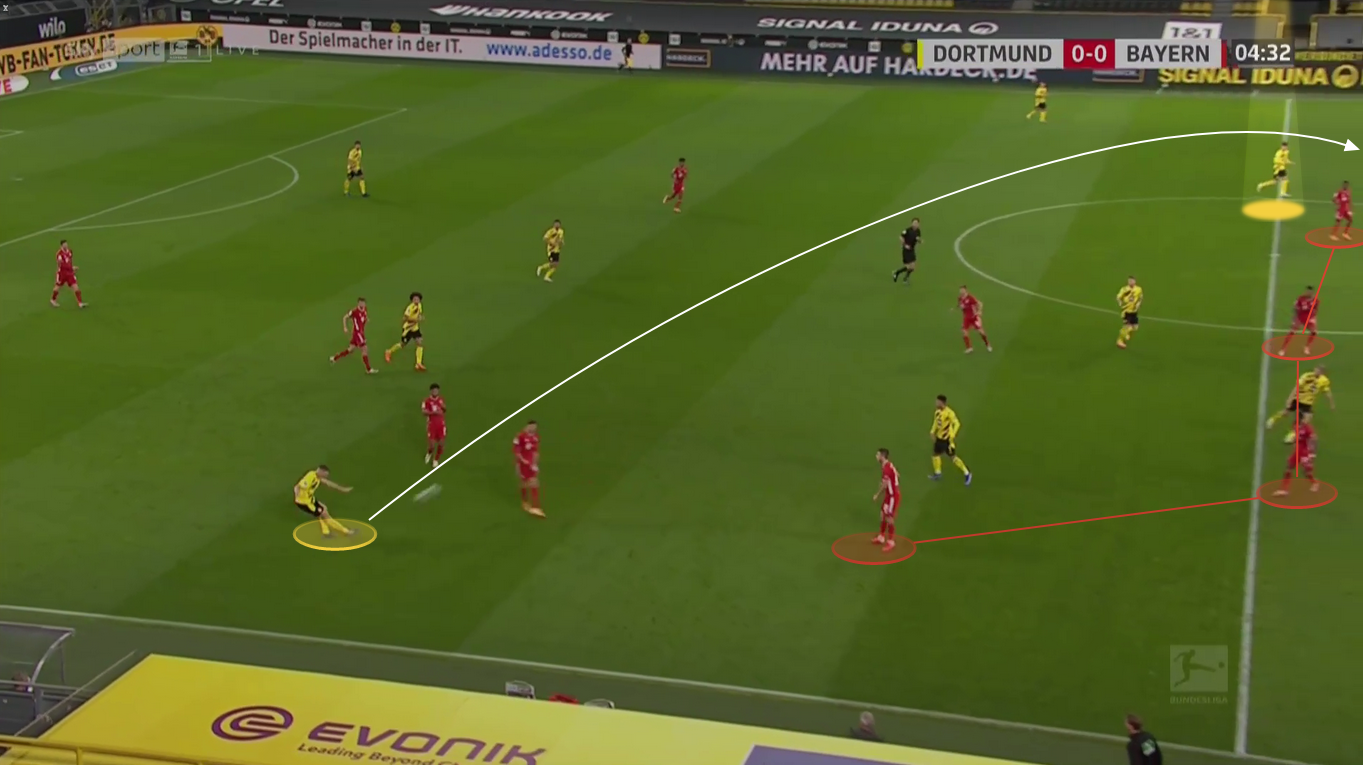 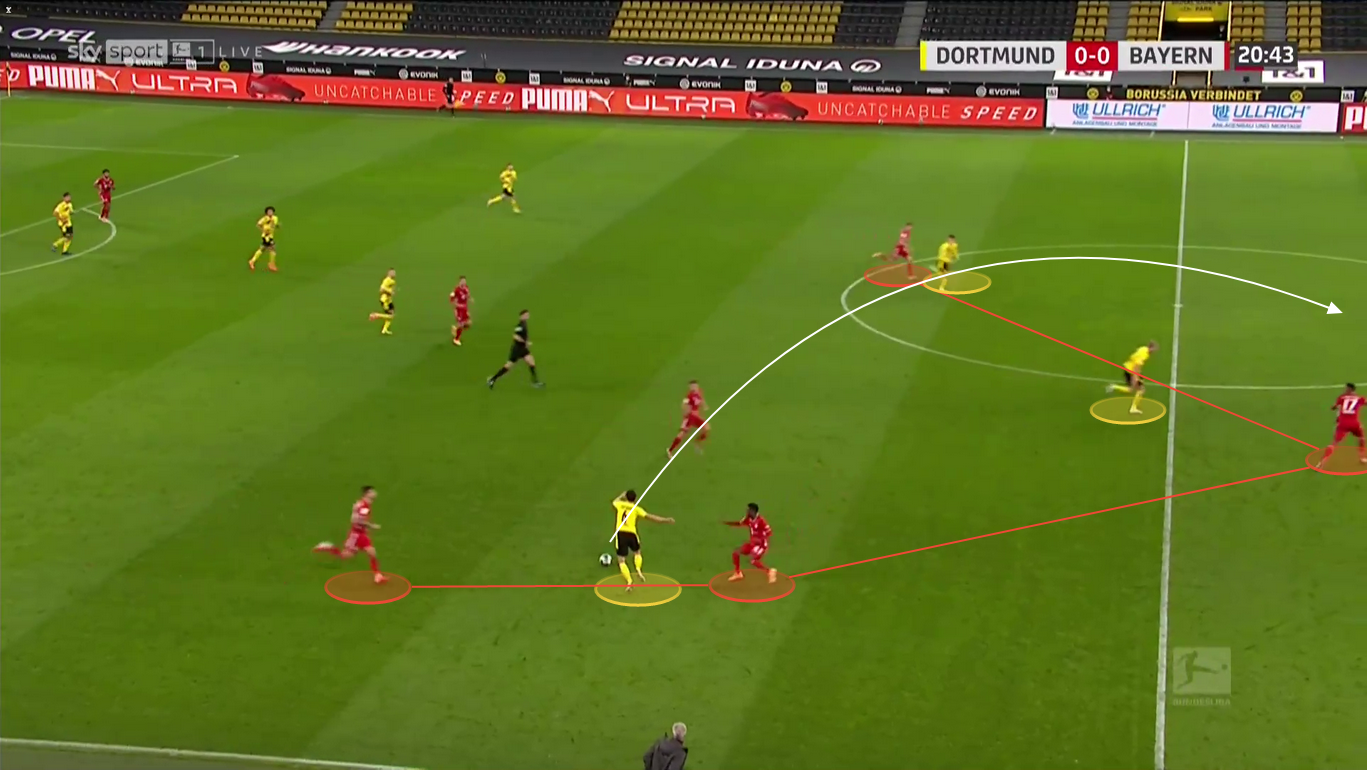 It was noticeable that Dortmund played these passes only to their left wing as they saw Bouna Sarr as the weak point in Bayern´s game. This can also be seen in how Dortmund created attacking moments. In the image below, we can see that Dortmund attacked through the left wing 18 times (71%).

As soon as Dortmund noticed that they lacked the ability to convert these goal-scoring opportunities into goals, they tried to use the spaces in Bayern´s backline in another way. It is a procedure that Dortmund used against Brugge last week already. While the offensive players try to attract the opposition´s defenders, one player runs into the opened half-space to receive a well-timed pass.

In the following image, we can see how Reus, Witsel, and Haaland attract Jerome Boateng, David Alaba, and Lucas Hernández. Sarr needs to press on Jadon Sancho who is in possession. That is how Dortmund opened up the half-space that can be filled by Raphaël Guerreiro. 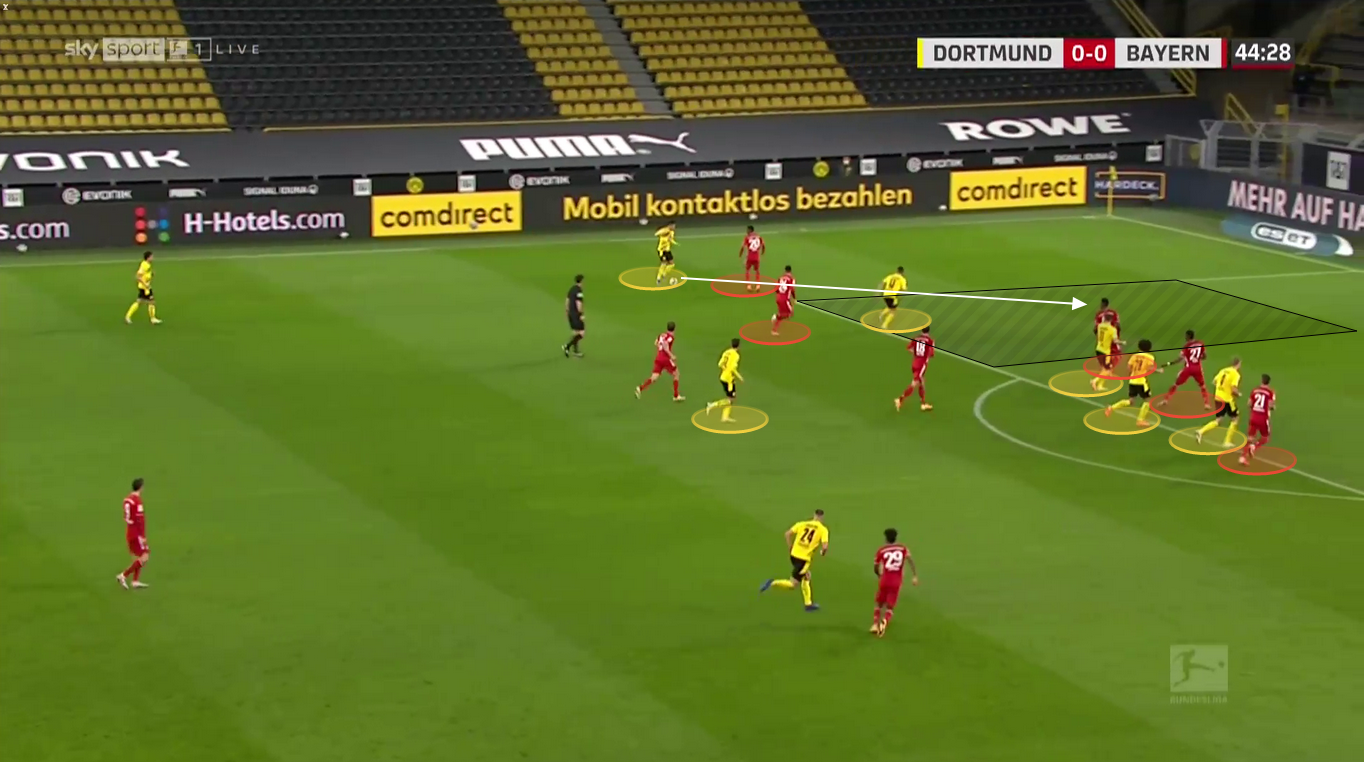 In the next image, Dortmund again open up the half-space within Bayern´s penalty box. Haaland starts in while Sancho plays a perfect-timed pass in behind the backline. 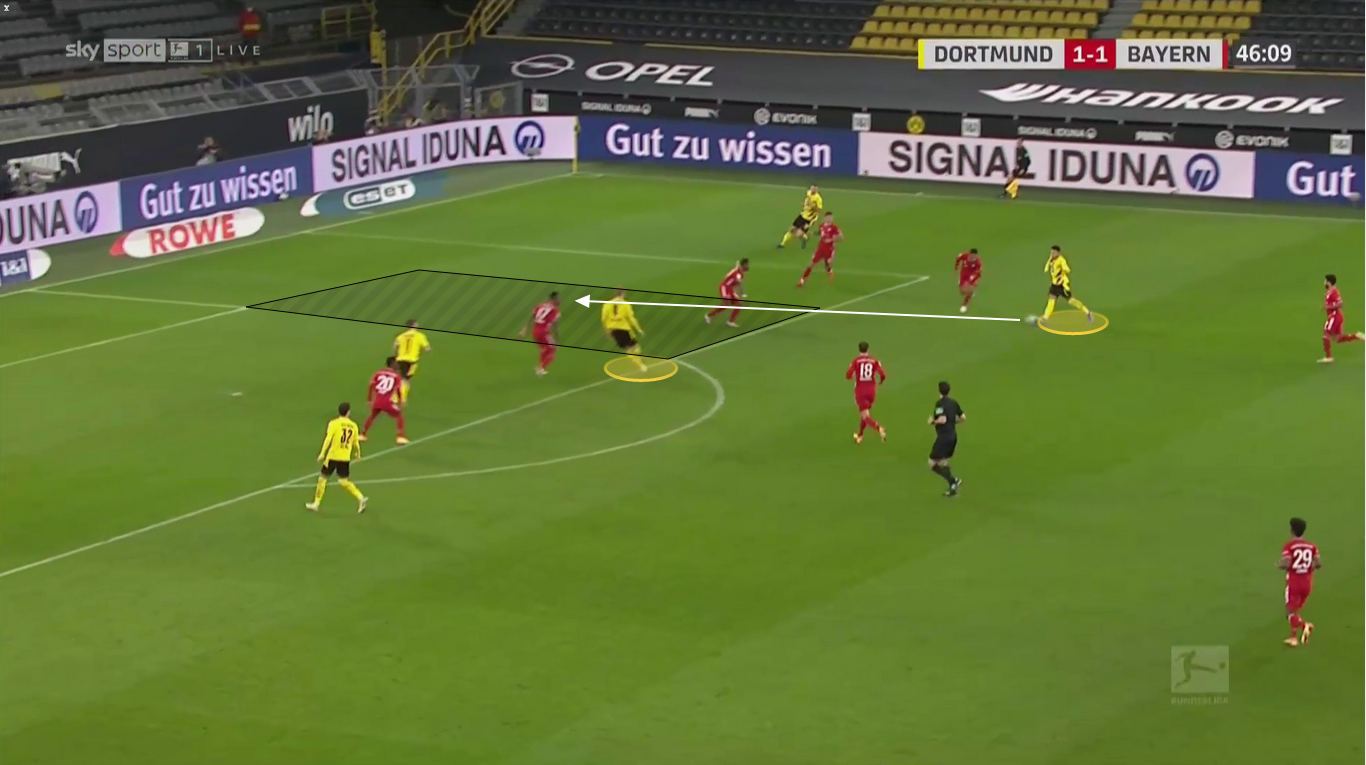 In contrast to the match in the German SuperCup some weeks ago, Dortmund did not drop deep this time. Instead of that, they tried to press high up the pitch. The idea was to intercept Bayern’s build-up play from the back. However, while the first line pressed extremely high and intense, the midfield did not move up. This opened up space in behind Dortmund´s first pressing line.

In the image below, we can see that the distances between´s Dortmund lines are too big and they did not form a compact shape. 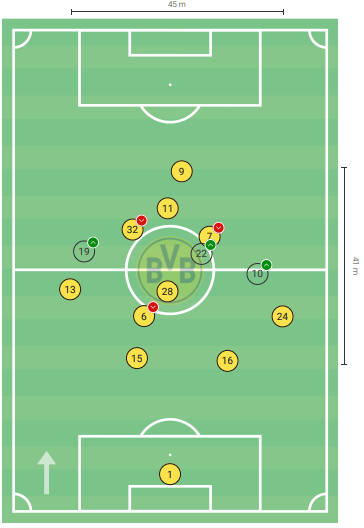 In fact, it was no problem for Bayern to overplay Dortmund´s first pressing line as Kimmich was free and had lots of space to receive the ball. After that, he could turn and progress the ball into more advanced areas on the pitch. 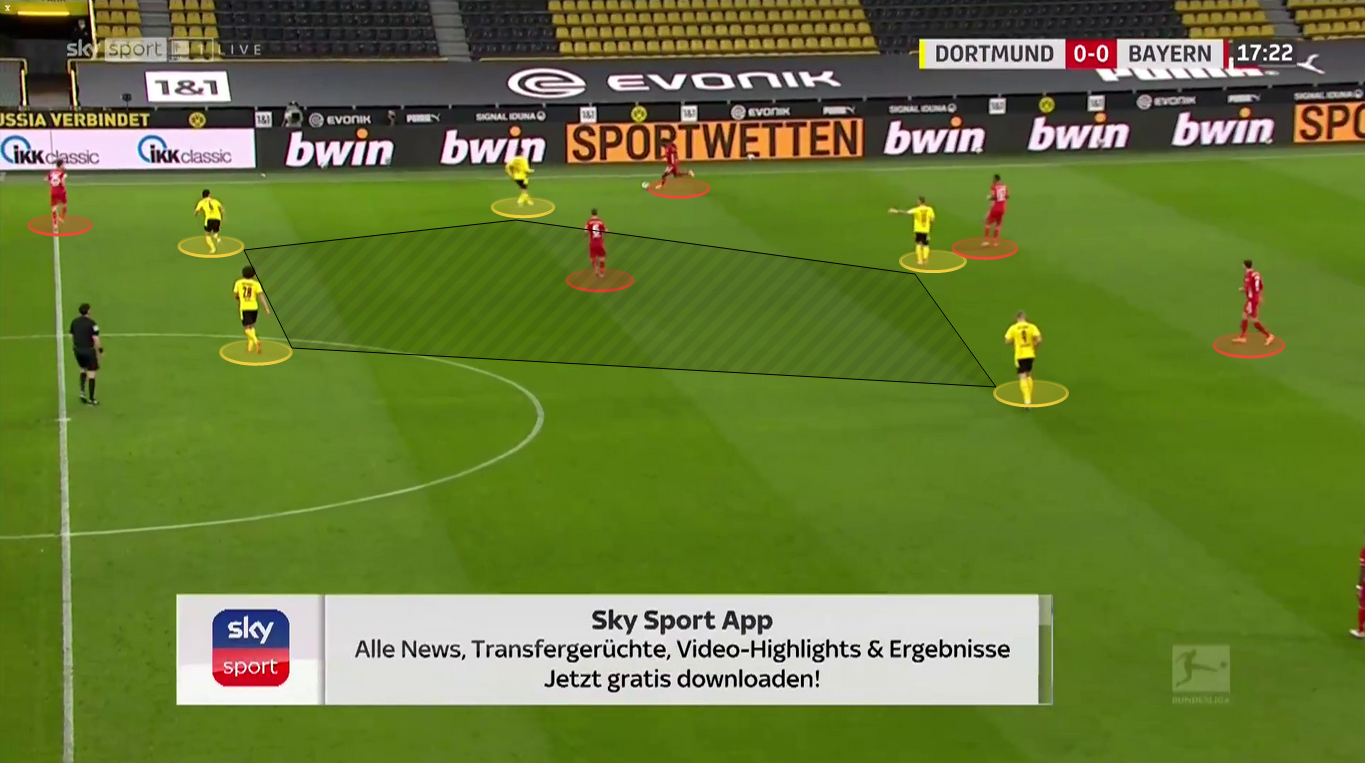 Again, Dortmund noticed their mistakes. After some minutes, Witsel pressed higher up the pitch to mark Kimmich but the rest of the midfield did not push higher. In this way, there were pockets of free space in the midfield area. 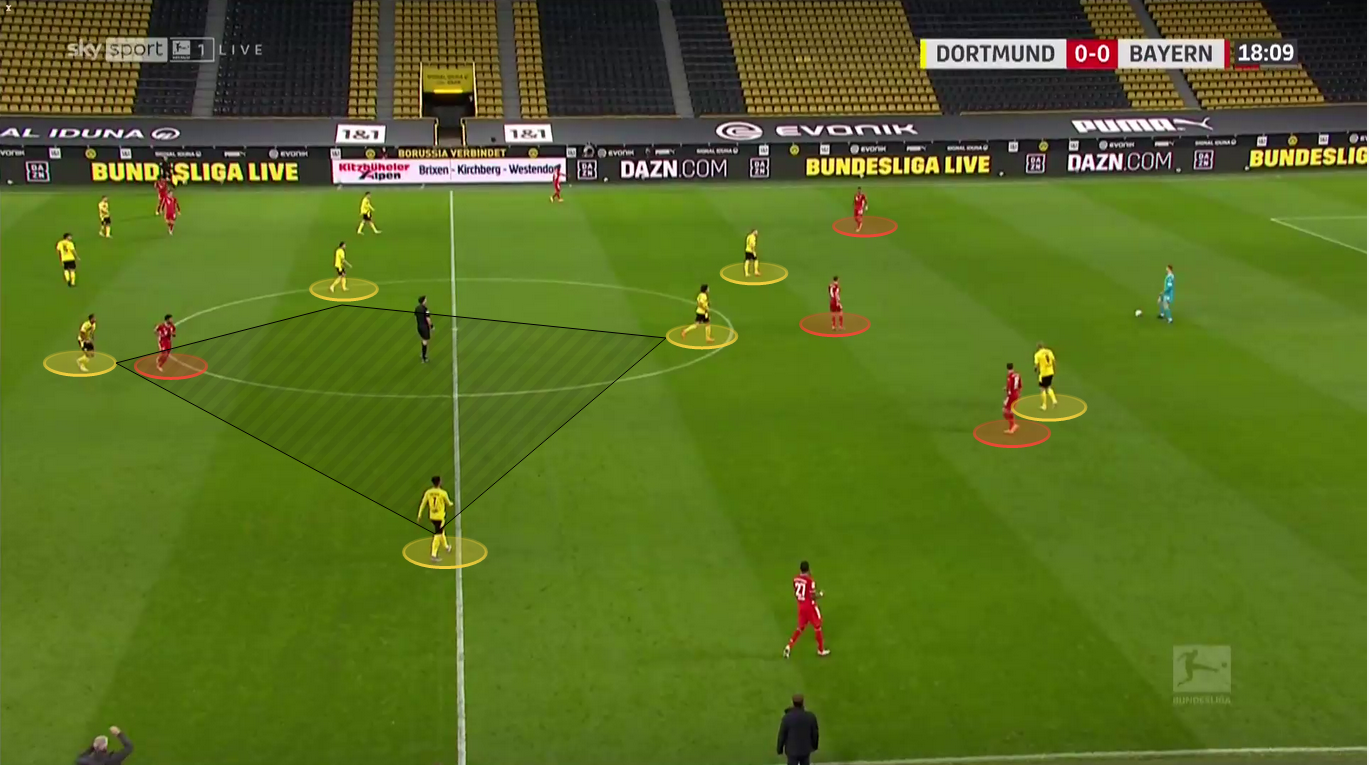 Under Flick, Bayern are normally known for their suddenly played chip-balls in behind the opponents´ backlines. Due to the injury of Kimmich who plays these passes most of the time, Bayern changed their game and played through their wings most of the time. While 72% of their attacks were initiated on the wings, only 28% were created in a central area on the pitch.

By doing so, they caused problems in the organization of Dortmund´s backline. Dortmund were in numerical superiority in those actions but the crosses still created dangerous opportunities.

At David Alaba´s cross in the following situation, Dortmund is in numerical superiority. However, Bayern´s players have too much space in Dortmund´s penalty box. Adding to that, Meunier leaves too much space for Alaba to bring the ball in without any pressure. 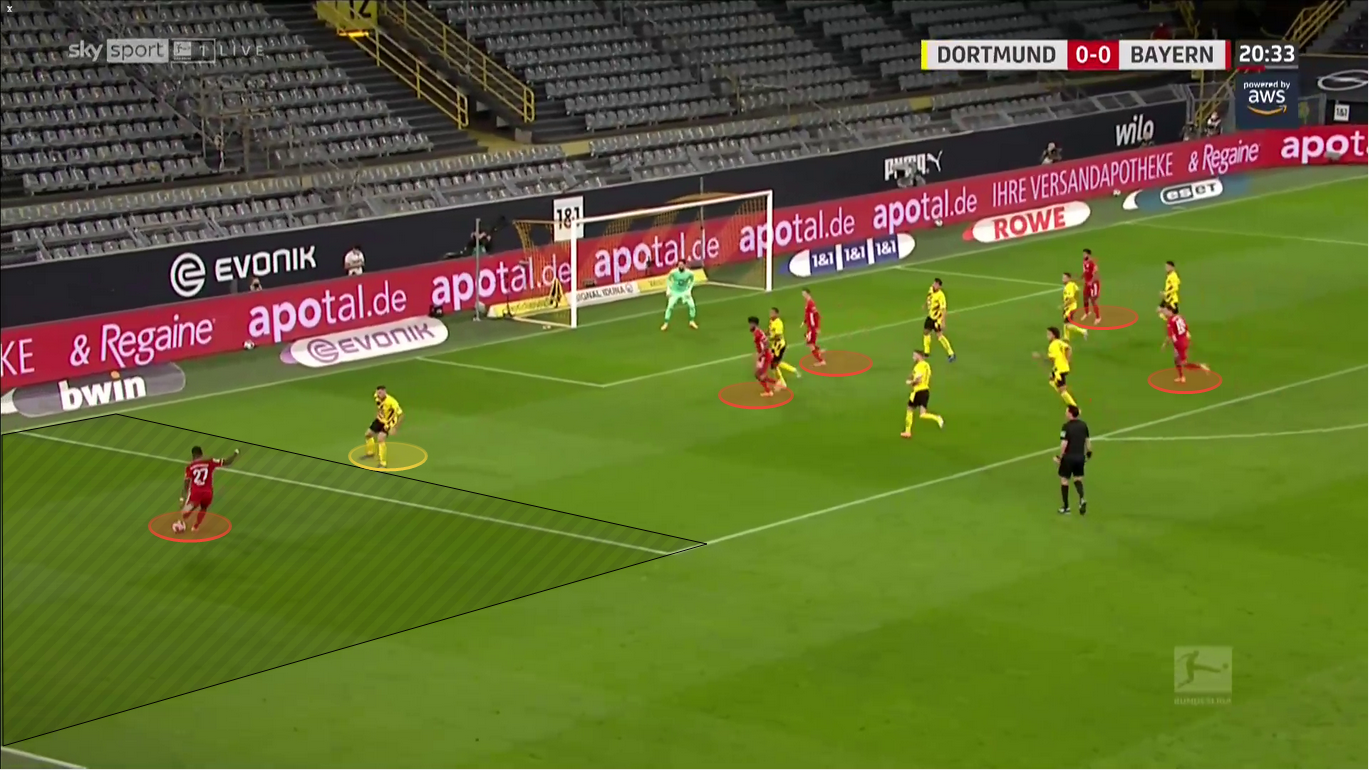 While Bayern did not use these opportunities in the first half, Lewandowski was able to score a goal after a similar situation in the second half. Again, Dortmund is in numerical superiority, but, it is lots of free space in between their defenders that is filled by Thomas Müller and Lewandowski. Meunier again does not press Hernández who has lots of time to cross. 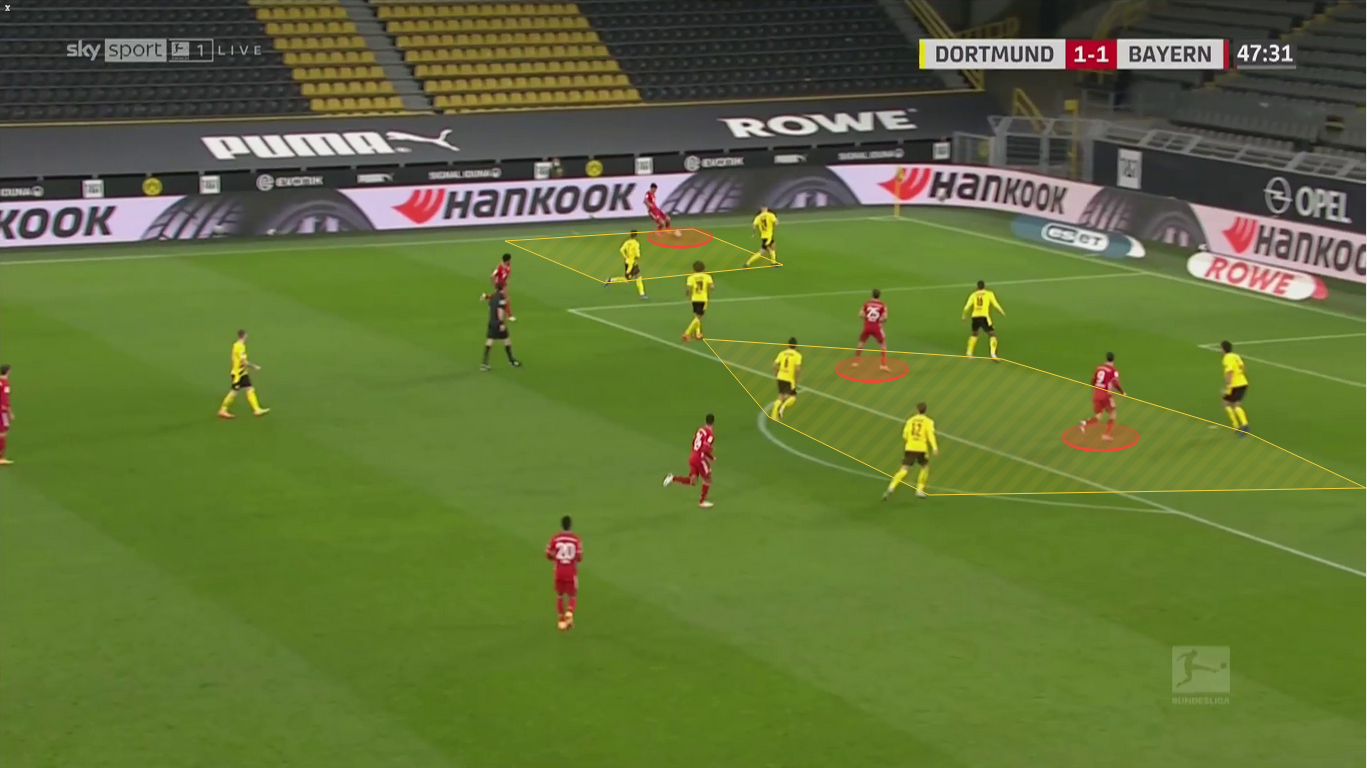 It was the awaited, tight, balanced, and offensive match as we can see by the following statistics.

In these matches, minor details and mistakes are decisive. While Dortmund noticed Bayern´s weaknesses, they could not use their goal-scoring opportunities wisely and underperformed their xGoals (2.38). All in all, Dortmund played good offensive football but made too many mistakes in their defence. In contrast to Dortmund, Bayern used these weaknesses and overperformed their xGoals (1.71).