Charleroi, while considered to be one of the strongest sides in the league, were not expected to be leading the league and staging a title charge. However, a consistent start to the season has seen them leading the way. Mechelen, on the other hand, have been disappointing, dropping points against teams they were expected to beat. With this draw, they have still only won once in the past five games. 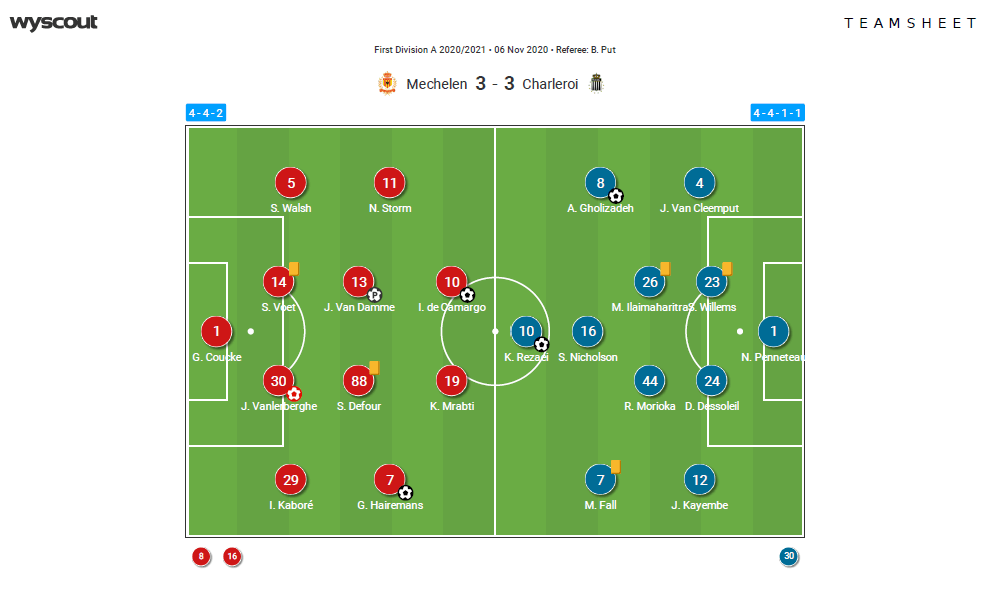 Mechelen lined up with a 4-4-2 formation, with Gaëtan Coucke in between the goalposts. Jordi Vanlerberghe and Siemen Voet were the centre-back pair, flanked by Manchester City loanee Issa Kabore on the right and Sandy Walsh on the left. In front of them, Steven Defour and Joachim Van Damme were the central pairing, with Niklas Storm on the left and Geoffrey Hairemans on the right. Kerim Mrabti was in support of former Bundesliga striker Igor de Camargo.

Charleroi went for a 4-4-1-1 formation, with veteran Nicolas Penneteau in goal. Dorian Dessoleil and Steeven Willems were the centre-back pairing, while one of the most impressive players this season, Joris Kayembe, was at left-back. Jules Van Cleemput was on the opposite flank, with Ali Gholizadeh in front of him on the right wing. Mamadou Fall was on the opposite wing, with Ryota Morioka and Marco Ilaimaharitra making up the usual central pairing. Imposing forward Shamar Nicholson was playing just off Kaveh Rezaei.

Working through two banks of four

From the outset, Charleroi were deploying more of a 4-4-2 when in defence, using two banks of four to try and limit the spaces for Mechelen to operate in. We see that Nicholson has pushed up alongside Rezaei to help create a two-man block at the top of the pitch, making it difficult for the home side’s defenders to play through the lines. 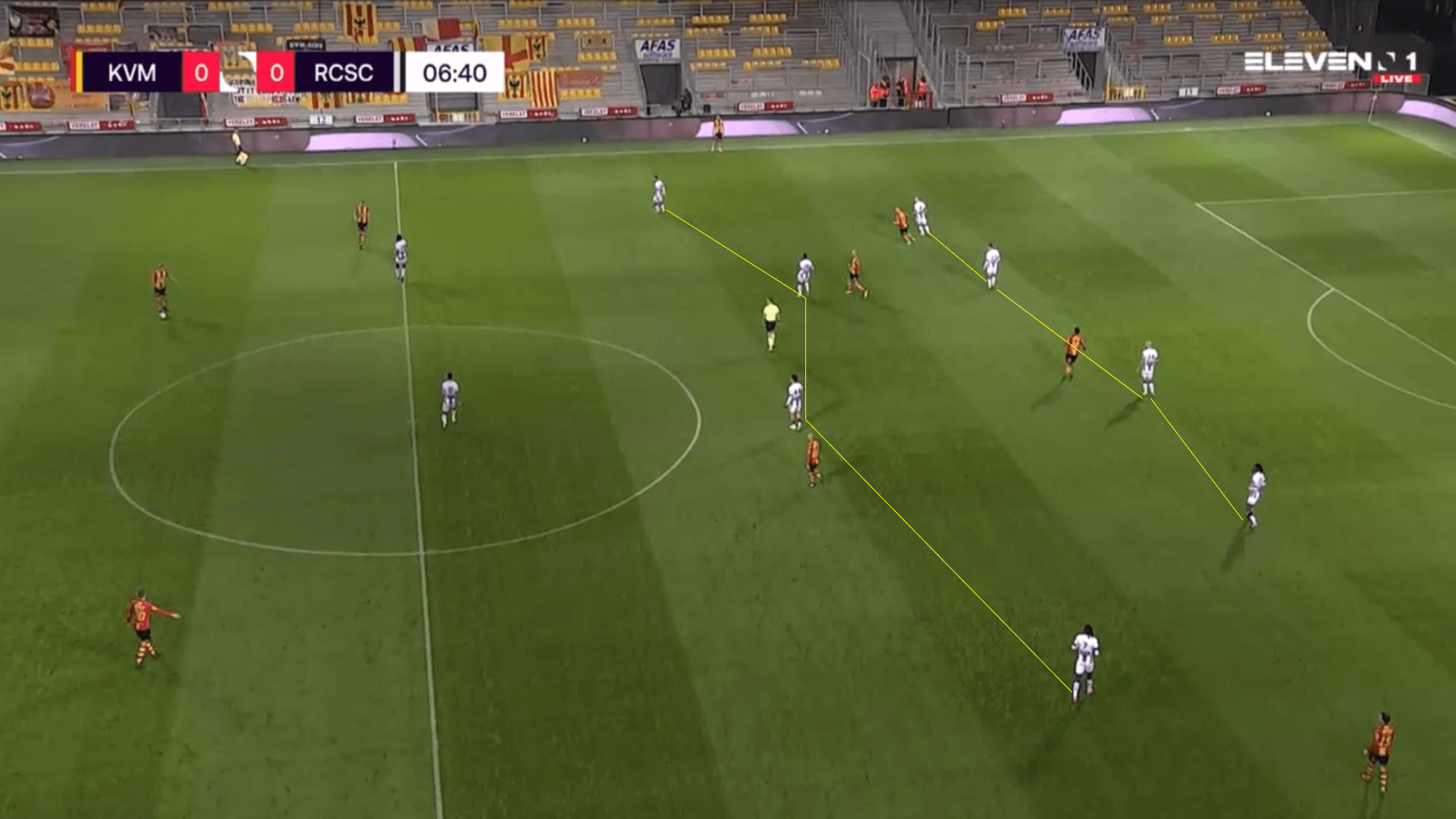 However, Mechelen’s Hairemans is a player who likes to play further inside. He does this to allow the attacking full-back Kabore to push forward into the gaps, as the side like to get the young Burkina Faso defender high up the pitch into crossing positions. We see this in the below image, with Kabore having pushed further wide into the space you would presume Hairemans would operate in. 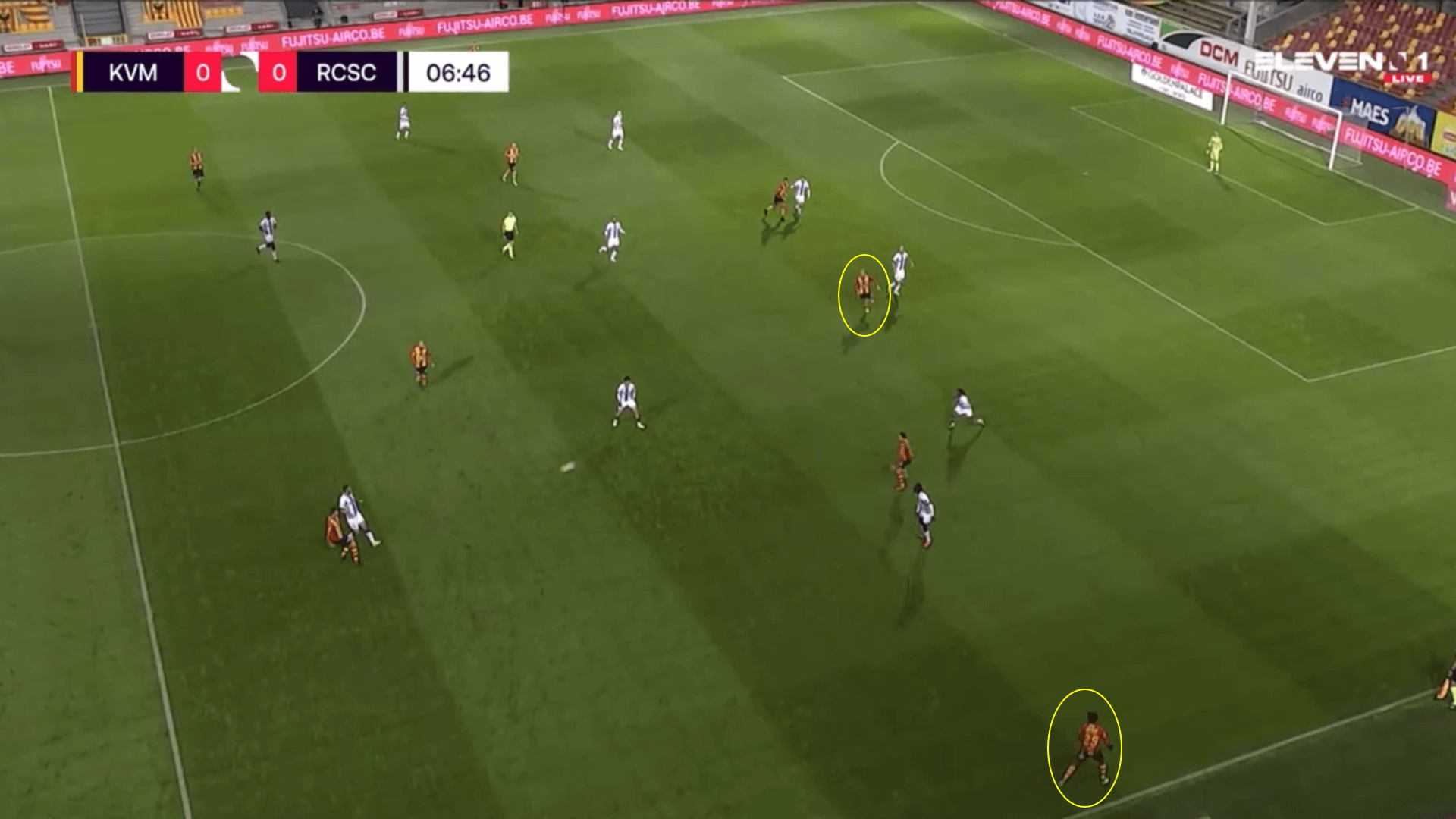 Instead, Hairemans has drifted inside, like he does in most matches. This gives the defenders greater options when it comes to finding a pass within the two banks of four that Charleroi deploy. Hairemans, circled in the above image, is the receiver of the pass. He is able to use the positioning of Mrabti, who himself has taken the focus of two players, to find space to receive the ball in. He finds Mrabti, who is then fouled, which leads to the free kick from which Hairemans gave the hosts the lead.

To reiterate the point about Hairemans, we see him in the below image in more of a central attacking midfield position than out wide. This is a feature of his play, and is clearly something which is encouraged by the Mechelen management; not surprising, given how difficult it makes him to mark, and how it helps them to play through opposition sides. 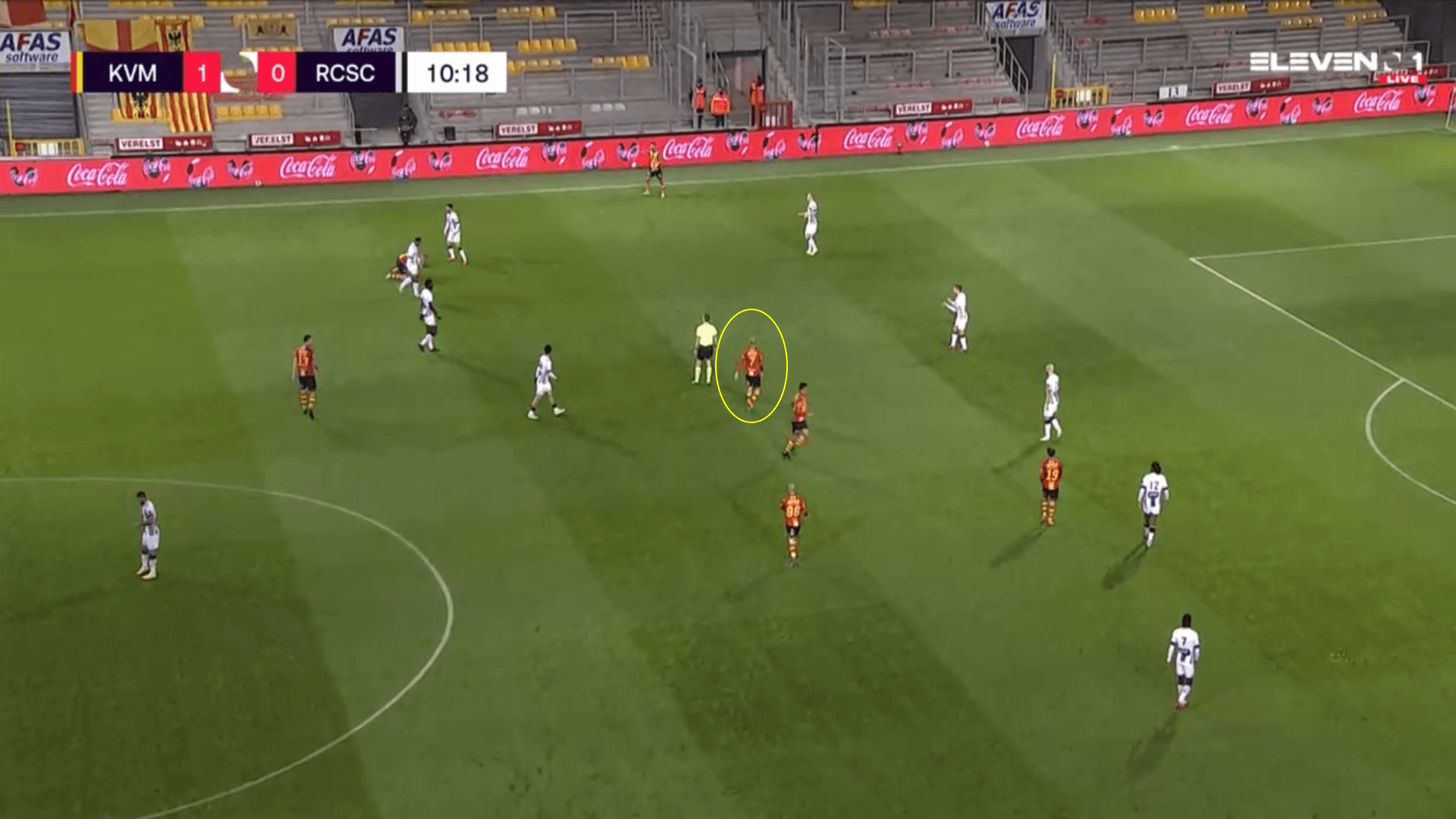 Mechelen were setting up defensively in a similar way to Charleroi, with two banks of four. We see how Hairemans, when the team are defending, is back in a traditional right midfield position to help create the two banks. Like Charleroi, Mechelen are looking to force the defenders to have to play difficult balls into areas where there is little space. 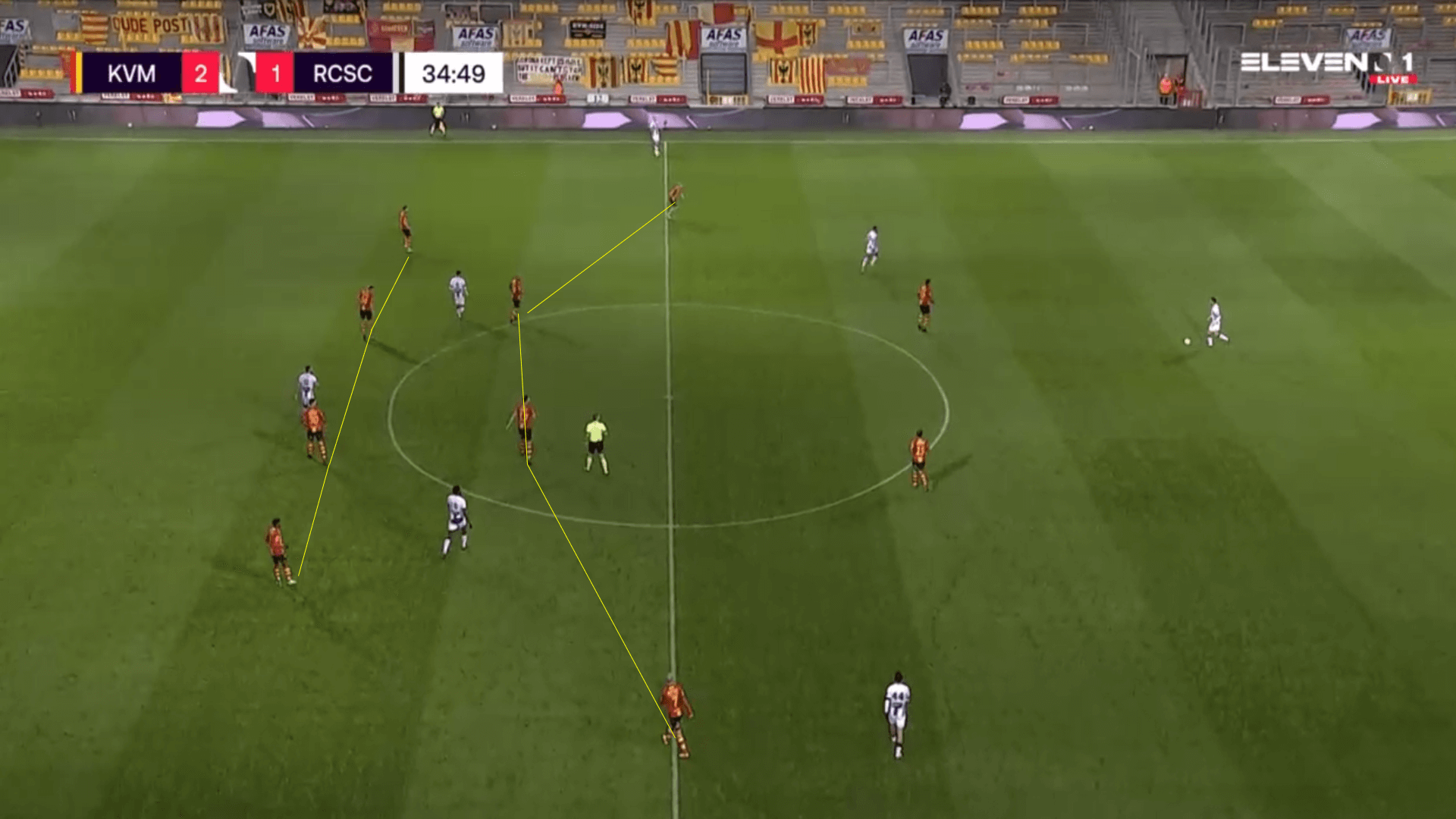 Charleroi looked to use a similar tactic to Mechelen, this time using their left winger Fall. He moved inside in order to drag the full-back with him, creating space for Kayembe, himself having played as a winger in previous seasons, to push forward into. With Nicholson and Rezaei occupying the centre-backs, the full-back is forced to track Fall, who has shown this season that he is a goal threat. This created opportunities like the one we see below, where Kayembe has plenty of space to operate in. 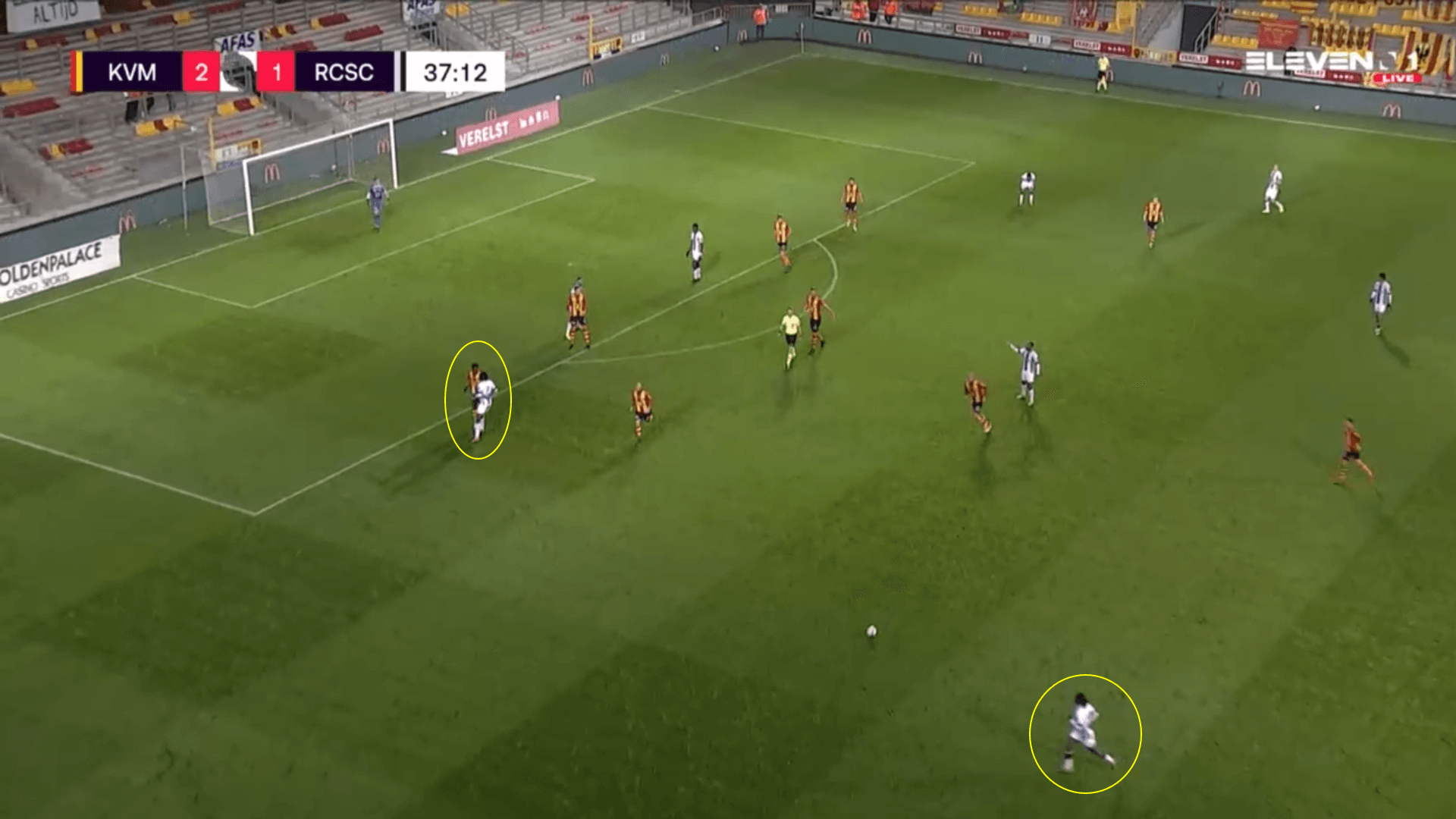 This helped create opportunities for the away side, as Kayembe had time to cross, or ended up being one-on-one with Hairemans in wide areas. Hairemans struggled against the dribbling ability of the winger-turned-full-back, creating a clear matchup advantage for the table toppers.

When we look at the data, we can see the impact Kayembe and the movement of Fall had on Charleroi. Kayembe managed to attempt eight crosses in the match, the most for the side. However, he only managed to get two on target at an accuracy rating of 25%. He also attempted 11 dribbles, the second-most for the side, of which he completed seven at a success rate of 64%. It was his dribbling that created the corner in the 55th minute of the match that got Charleroi back on level terms.

Mechelen, while more than likely concerned with the number of crosses the full-back was able to attempt, would have been happy that his accuracy was so low.

After going 3-2 down, Mechelen looked to increase the pressure on their opponents. Rather than sitting in the two banks of four, and having the strikers playing slightly off the Charleroi defenders, they wanted both de Camargo and Mrabti to push higher up. Their pressing intensity or PPDA went from seven at the time of Charleroi’s third goal, to 4.9 by the end of the game. This helped them win the ball back, as their recoveries per minute increased from 0.4 to 0.5 in a similar amount of time.

We see below an example of this, with both the forward players having pushed up, while three of the other midfielders have also pushed into the opposition’s half. When we compare this to the earlier image, we can see the difference in how much higher up the pitch these players are. The only real option on here for the defender that is risk-free is back to the keeper. 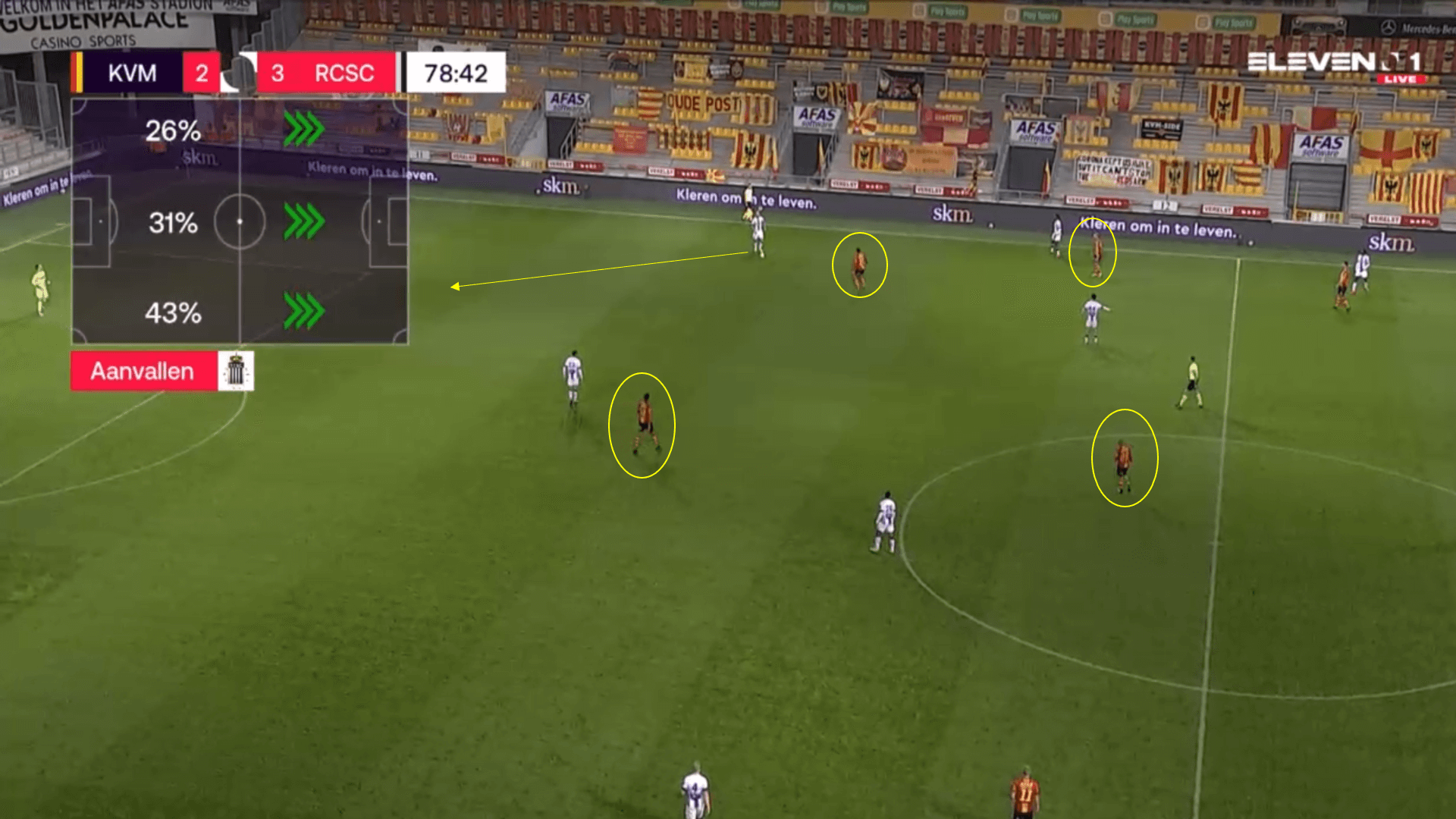 After the keeper has cleared it, the ball eventually falls to the Chareleroi central midfielder, who is now being pressed intensely by the Mechelen players. This forces the player into a risky pass, and wins possession back for the home side. 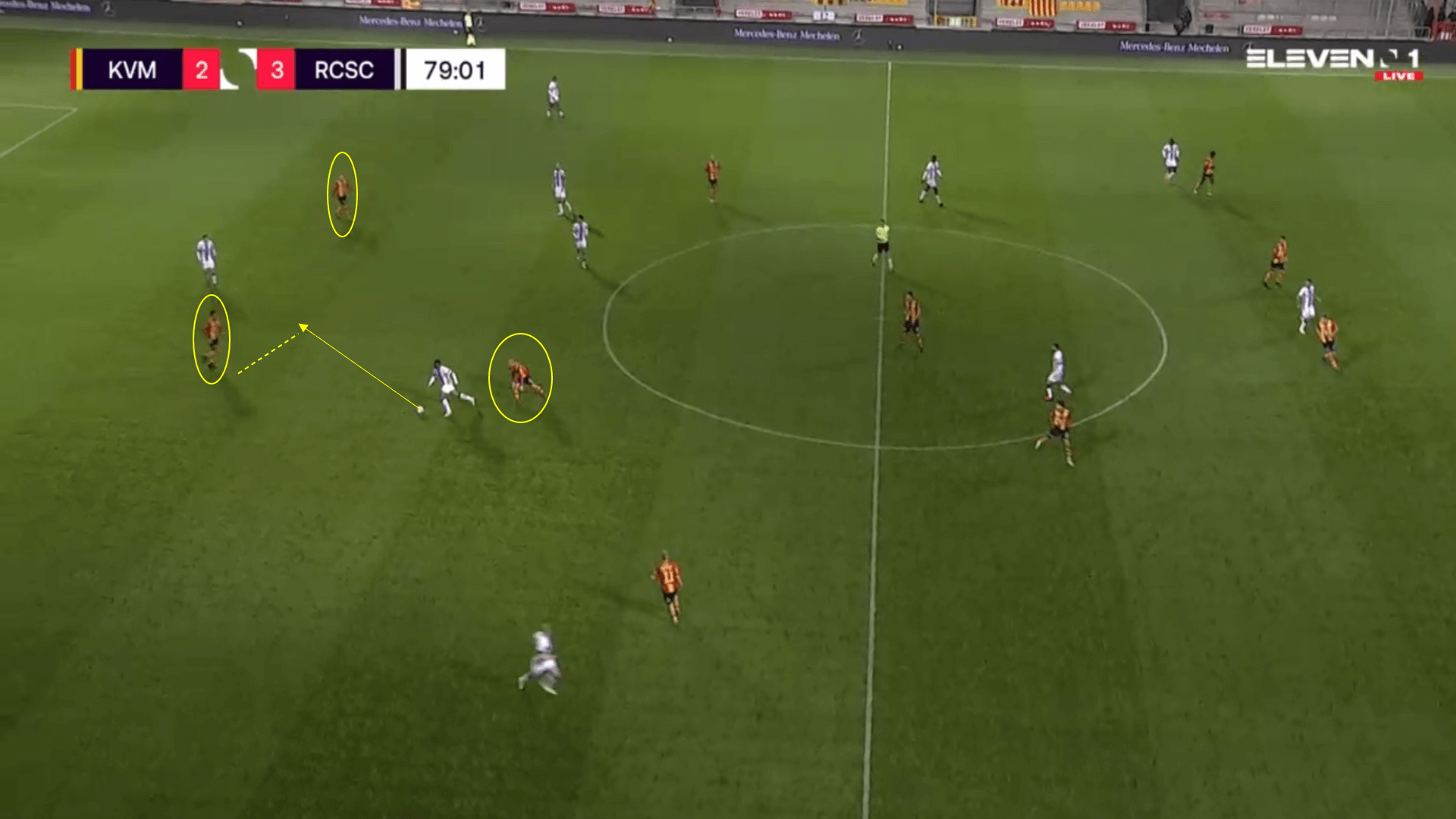 This leads to a great opportunity, which is well recovered by the away side. However, the resulting corner led to a penalty, and ultimately the equaliser for Mechelen. Their switch to a more intense press, and the execution of this press, was the reason they were able to come away with a point.

Both sides played out a really entertaining game, which saw plenty of goals and momentum shifts. The two teams had to work out how to create chances against two banks of four, and used similar tactics in order to create more space. Chances were a plenty and either side could have won it, but in the end a point was probably deserved for both sides.