It is that time again: The UEFA Champions League goes into its next season. There are several top teams playing against each other on matchday 1 already. One of the probably most interesting matches is the fixture between Lazio and Borussia Dortmund in Group F. The kick-off is on Tuesday in the Stadio Olympico in Rome.

The hosts had a bad start into the new season with only four points in three matches in Serie A and therefore, they are only ranked 9th in the league. Dortmund lost the Super Cup final against their big rivals FC Bayern but could win three out of four matches in Bundesliga.

In this tactical analysis, we will take a closer look at the tactics of both coaches. Furthermore, this analysis will show how the coaches might line up their teams.

Currently,  both teams have big issues with injuries. Lazio will miss Silvio Proto, Luiz Felipe, Stefan Radu, Bastos, Sofian Kiyine, Manuel Lazzari, Andreas Pereira and their captain Senad Lulic because of injuries or cross-competition suspension. Their top goalscorer and former BVB-player Ciro Immobile is ready to play after he missed three matches because of a red card in Serie A.

Dortmund is forced to play without Dan-Axel Zagadou and Marcel Schmelzer while Manuel Akanji, Łukasz Piszczek and Thorgan Hazard are still struck. Emre Can will miss the match as well since he got a red card against Paris Saint-Germain in the UEFA Champions League last year. That is why Favre might line up central defensive midfielder Thomas Delaney as centre-back. A change from a back-five to a back-four seems as another option likely to happen. 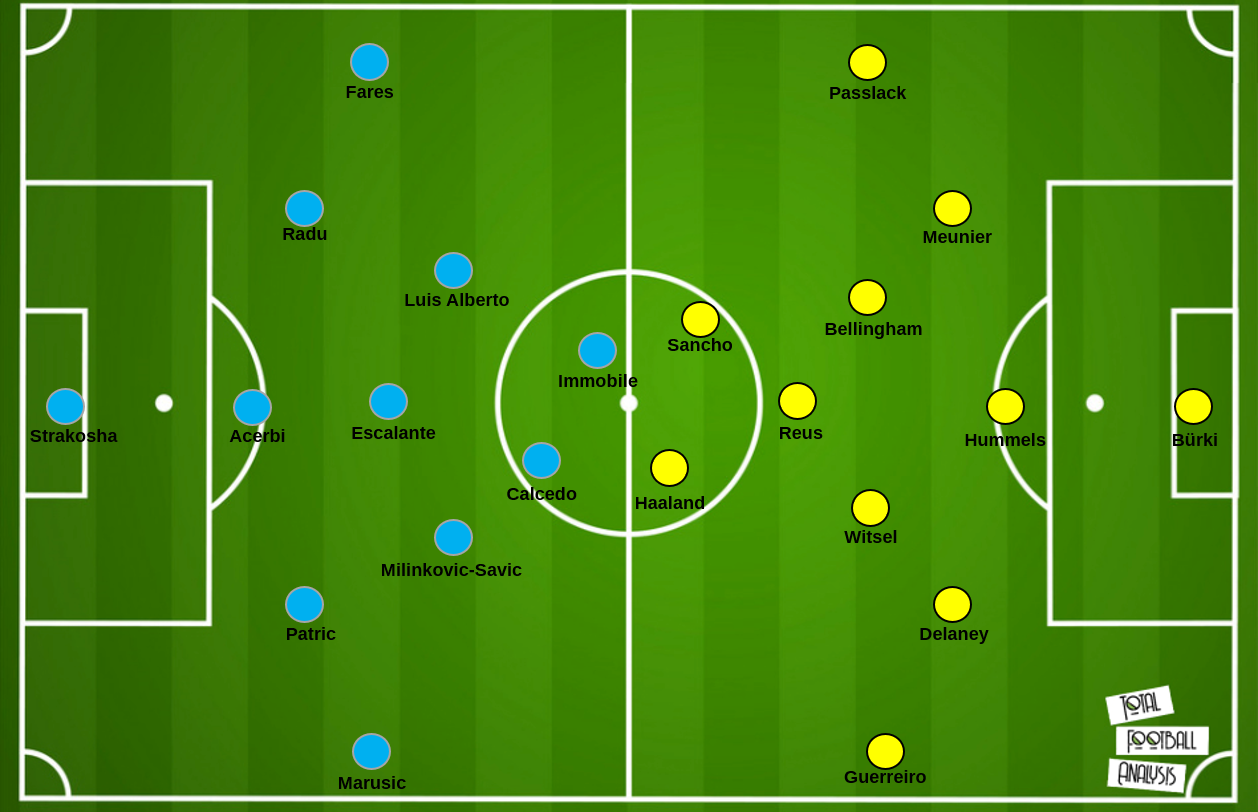 Lazio try to close up space in central areas on the pitch. Their two forwards and three central midfielders form a pentagon in these areas to force their opponents to play out wide. For Dortmund, this means that their central midfielders will need to be creative in open up space through creative runs out of the center.

In the image below, Inter is in possession and their centre-backs try to build up the game from the back. Since Lazio closed up the space in the center, Inter´s midfielders had to react and move quickly. While Roberto Gagliardini dropped deep into the backline to receive the ball, Nicolo Barella dropped from his central offensive midfield position into a deeper position in midfield. Only Arturo Vidal stayed within Lazio´s compact pentagon shape. 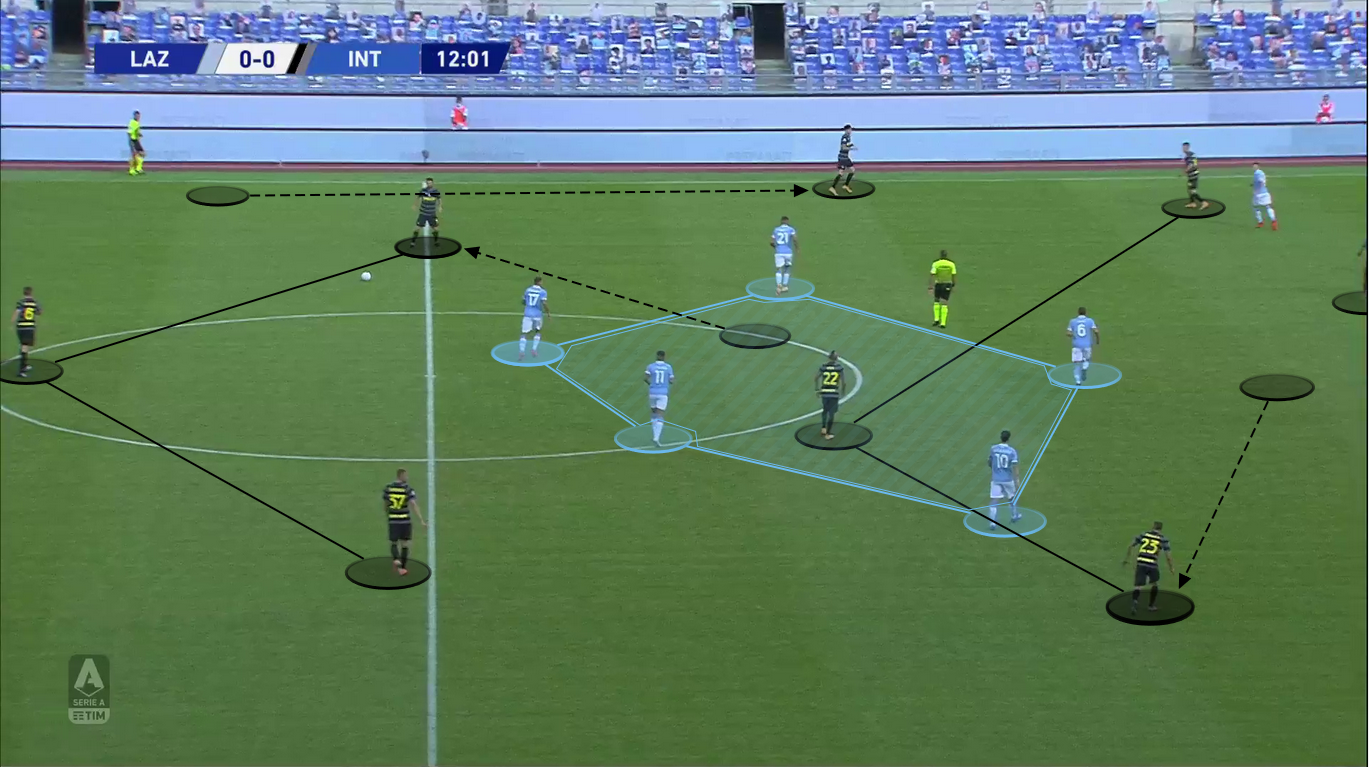 So, Dortmund´s central midfielders will need to think of clever movements and to be in motion through the whole match to open up space. In the image below, Reyna switched positions with Guerreiro to confuse Freiburg´s backline for a moment. These movements will be essential to break Lazio´s compactness. 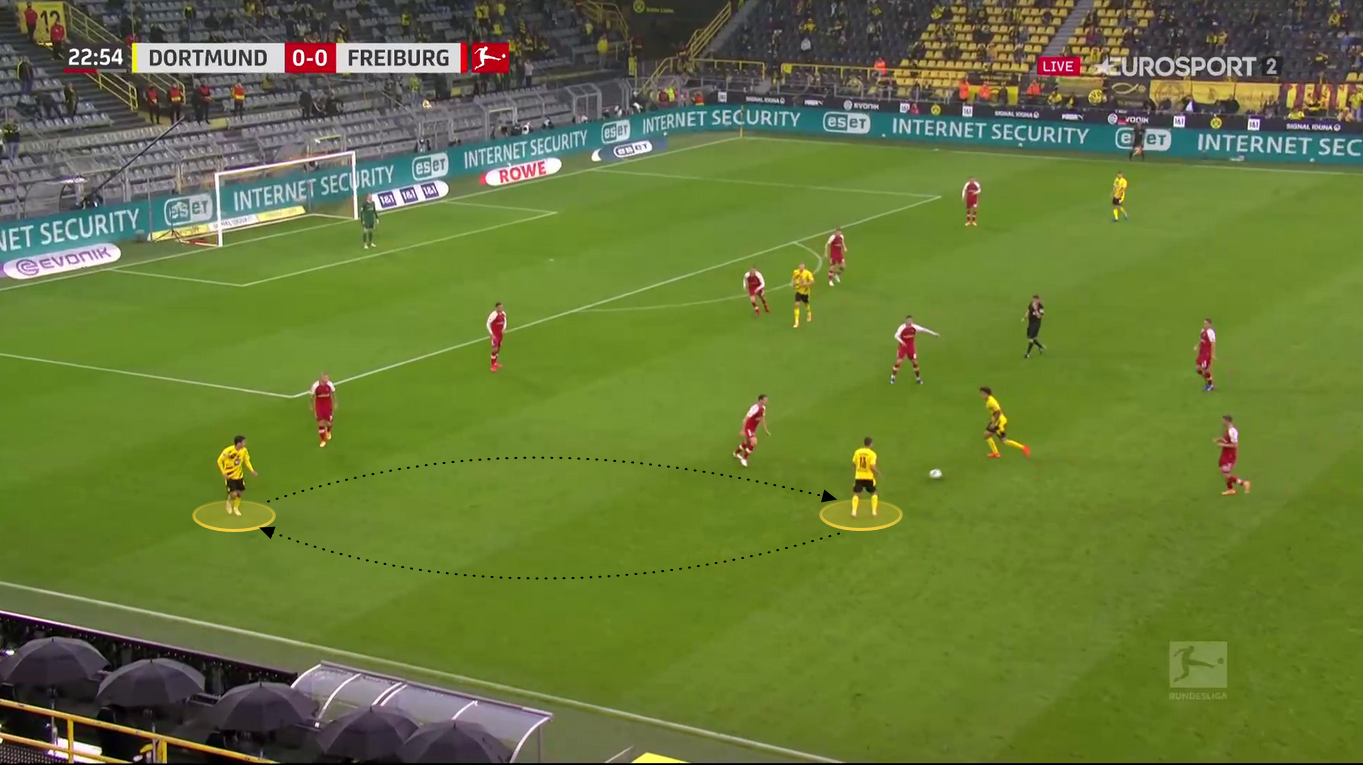 Even if Lazio is doing a good job in tightening up space in central and dangerous areas on the pitch, this compactness leaves space on the wings. Dortmund will be aware of this fact and could play most of their passes out wide to their wing-backs. Especially in their build-up game, they will need to play those passes to overplay Lazio´s first pressing line.

In the image below, Inter is in their build-up phase and their centre-back is in possession. While Lazio again form their pentagon-shape, Inter´s centre-backs and wing-backs stay completely free and have enough time and space to bring the ball into advanced areas on the pitch. 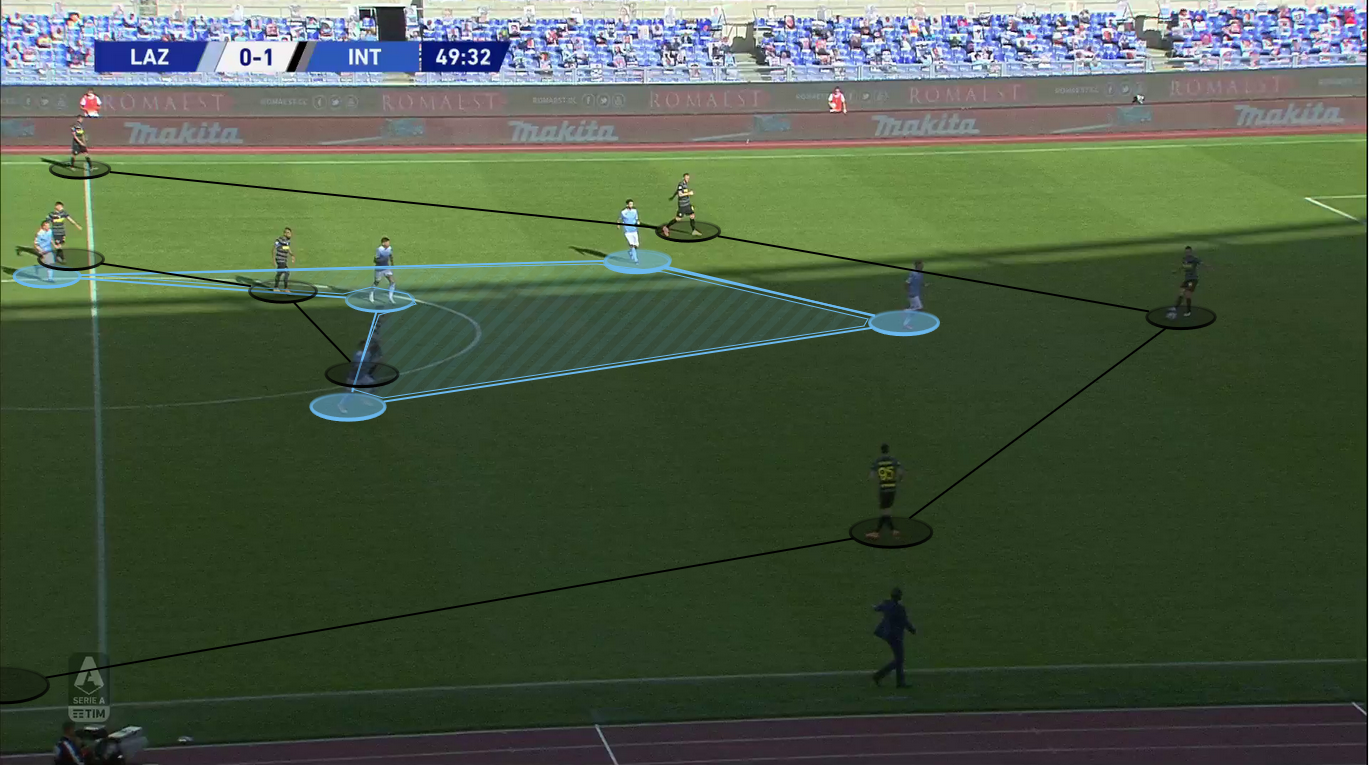 So, the center will be closed and Dortmund, who normally play through the center, will need to adapt their playing style to come in behind Lazio´s attacking and midfield line.

Since Dortmund play in a 3-5-2 (or respectively 5-3-2) formation, their wing-backs are forced to run up and down the pitch for the whole 90 minutes. In their pressing system, they need to press high and once the attacking line is overplayed, they need to react quickly in transition. Especially at the end of the match, Dortmund´s wing-backs seem to have not enough power to get back into the backline in high-speed anymore. These are the situations Lazio will need to use.

In the following image, we have this situation as FC Augsburg is in the counter-attack. Dortmund´s wing-backs Felix Passlack and Thomas Meunier have issues with forming a back-five in time. Due to a long ball in behind Dortmund´s high-staying defensive line, Augsburg can create a goal-scoring opportunity. 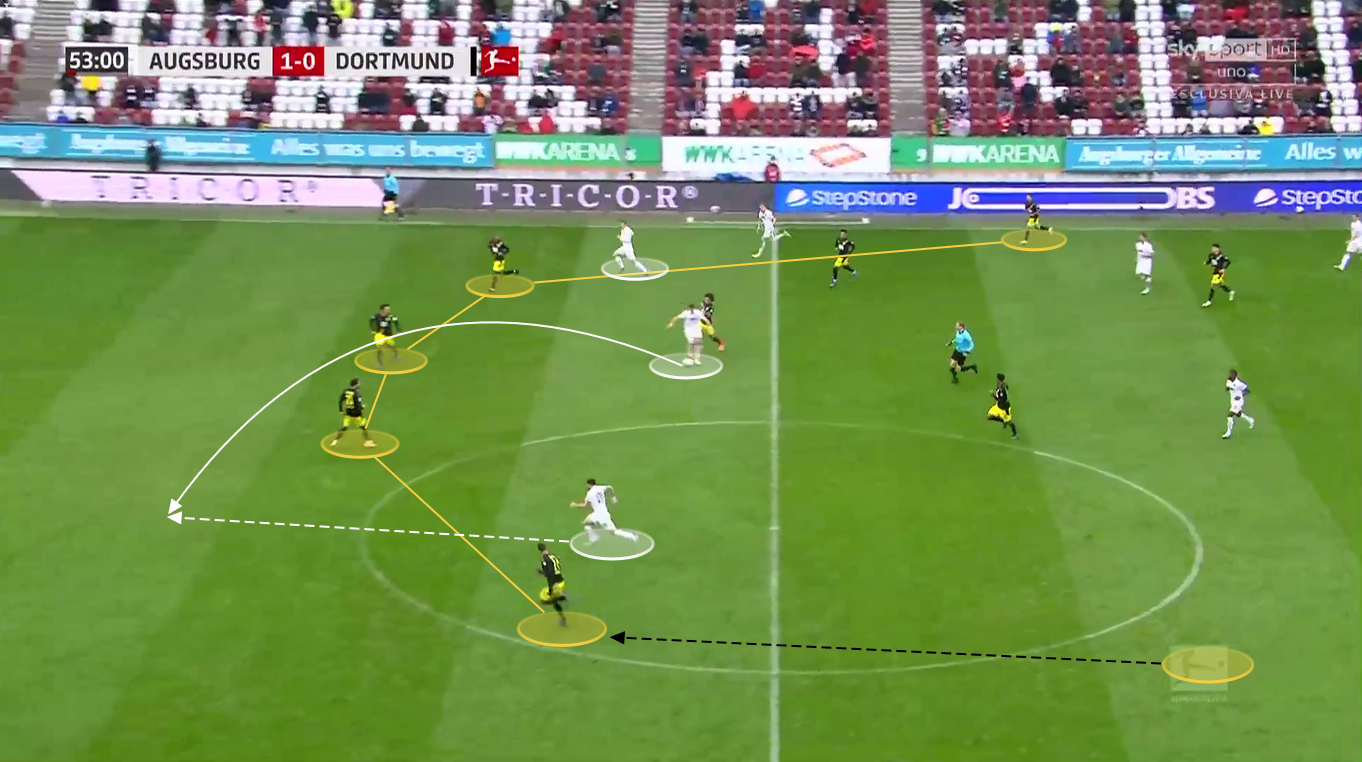 Another situation, same issue: Dortmund´s wing-backs pushed high up the pitch and now, they need to react quickly in transition. The wing-backs of Augsburg can exploit much space on the wings and Augsburg´s central midfielder has several options to play an interface pass into a dangerous area. 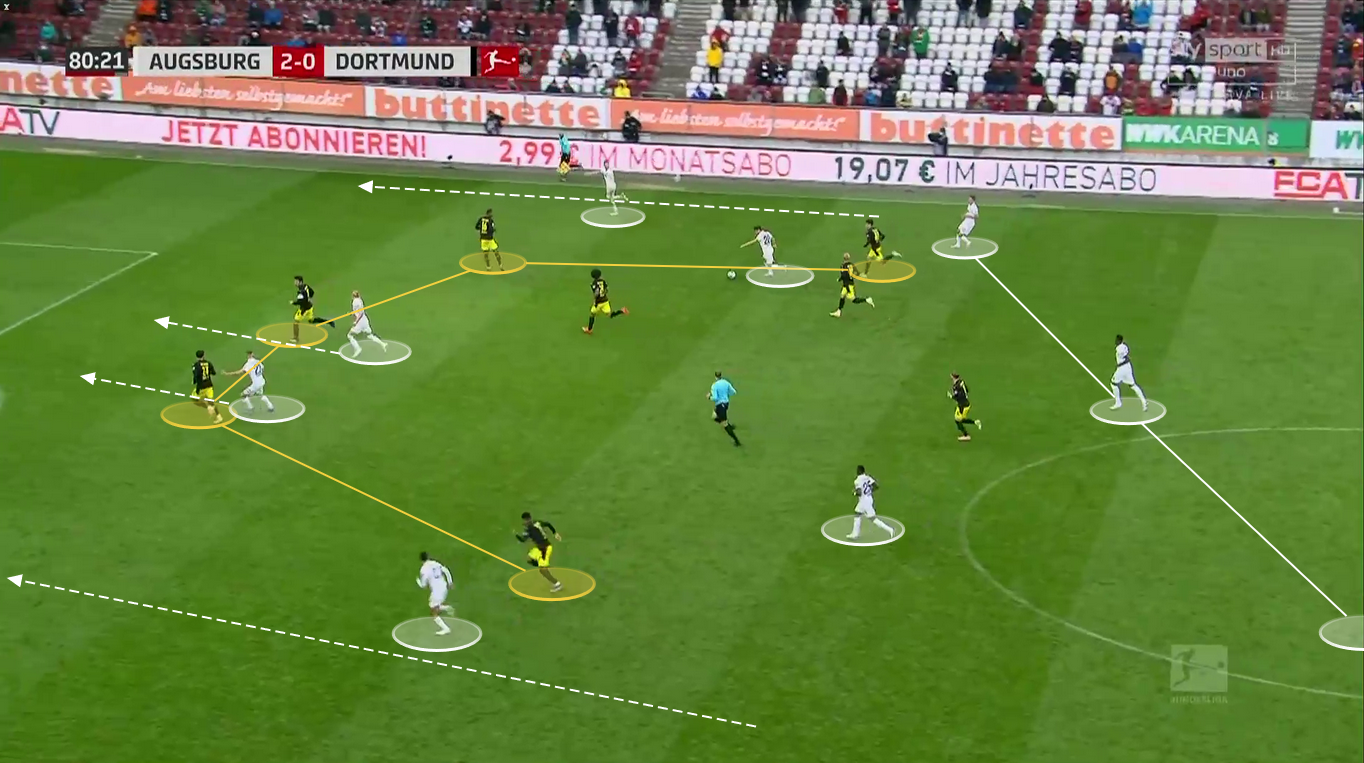 The next image shows how Lazio play in counter-attacks. Inter´s wing-backs pushed high but Lazio could overplay their first pressing line. While the creative midfielders Sergej Milinkovic-Savic and Luis Alberto are responsible for playing a well-timed pass, both forwards and the wing-backs try to offer passing options immediately. Their system changes from a 5-3-2 into a 3-3-4 in the offensive transition. 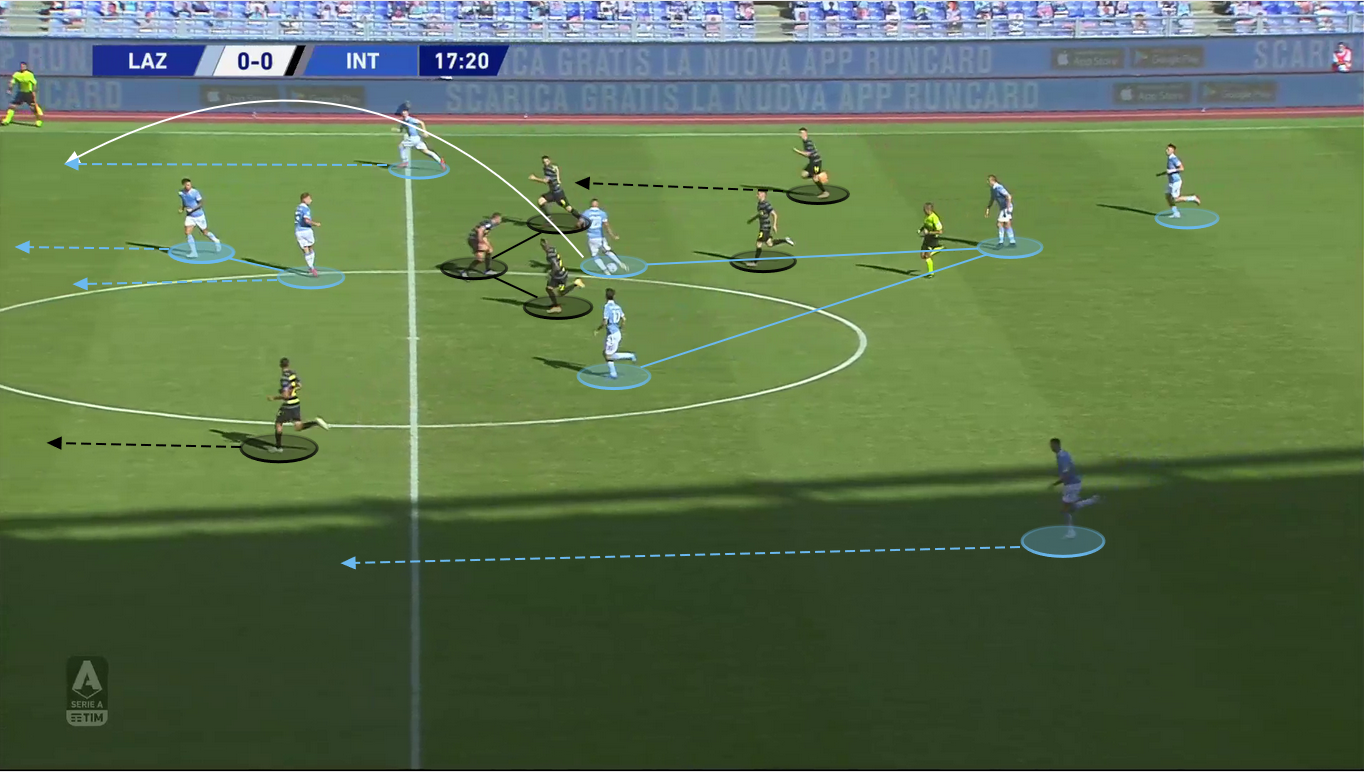 Dortmund is likely to be in possession most time of the match. At the same time, Lazio will try to close the space in central areas to intercept Dortmund´s build-up play. However, Dortmund will get their opportunities if they play smart and patiently. Their wing-backs will have a key role in this match. Lazio will wait for the perfect transition moment to use their extremely dangerous counter-attacks. Nevertheless, Dortmund is favourite to win this match, even if Lazio play at home.