Lille came into this game having drawn two and lost one of their last three Ligue 1 games. This is not ideal, but with this win, they still maintain second place and are only two points behind PSG. Lille are juggling league games with Europa League games, meaning they have more games to play than most Ligue 1 teams. In fact, they have an important match this week against AC Milan, and this victory will give them confidence ahead of the game.

On the other hand, Lorient is struggling in the league. They are in 18th place and had lost two and drawn one of their last three games. This shows that they cannot seem to end their negative run. However, they are only one point from a position that would keep them in the league, so there is still hope for them.

Lille won this game 4-0 and were clearly superior to Lorient, who played poorly in the first half but improved somewhat in the second half.

In this tactical analysis, we will observe how both managers set out their tactics and how they changed them throughout the game. In this analysis, we will explain how Lille was so superior to Lorient and why Lorient struggled so much against this team. 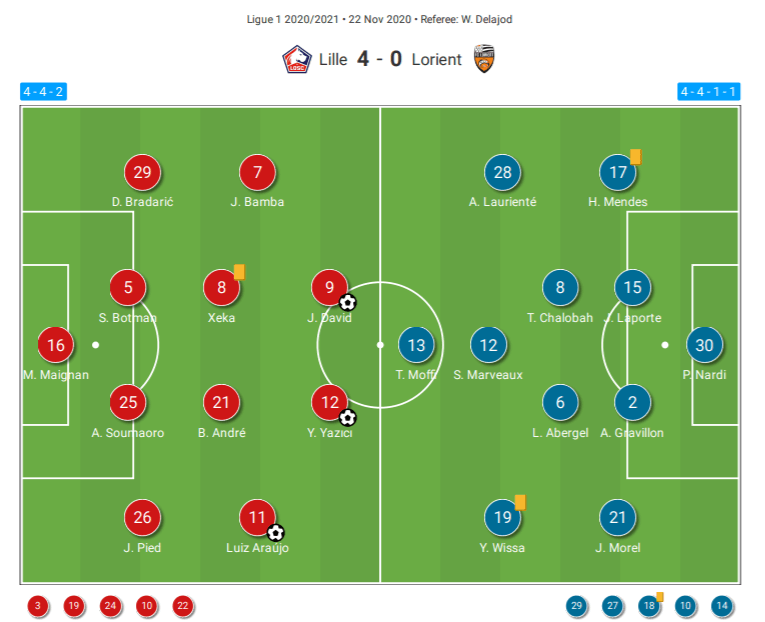 Lille played the whole game in a 4-4-2. Jonathan David and Yusuf Yazıcı led the attack, with Luiz Araújo and Jonathan Bamba as wingers. In the midfield were Xeka and Benjamin André. Then, the back four consisted of Jérémy Pied, Adama Soumaoro, Sven Botman, and Domagoj Bradarić, while Mike Maignan played in goal.

Lorient started in a 4-4-1-1, with Julien Laporte and Andrew Gravillon being the main pillars of defence in front of Paul Nardi. The full-backs were Jérémy Morel and Houboulang Mendes, having Yoane Wissa and Armand Laurienté ahead of them as wingers. The midfield duo was Laurent Abergel and Trevoh Chalobah. Lastly, the attacking midfielder was Sylvain Marveaux, and Terem Moffi was the striker.

In the first half, Lille’s pressing varied. Sometimes, they set their team in a medium-high block and let the Lorient centre-backs pass the ball between each other. Since Lille was more focused on defending passes through the middle, the centre-backs had to make long balls and play direct football. These long balls usually resulted in Lille recovering the ball, so there was no problem in doing this strategy.

In the image below, we see Lille’s positioning on the pitch and how far the strikers are from the centre-backs. They are almost inviting them to pass the ball between each other because there is no danger to Lille with the ball there. 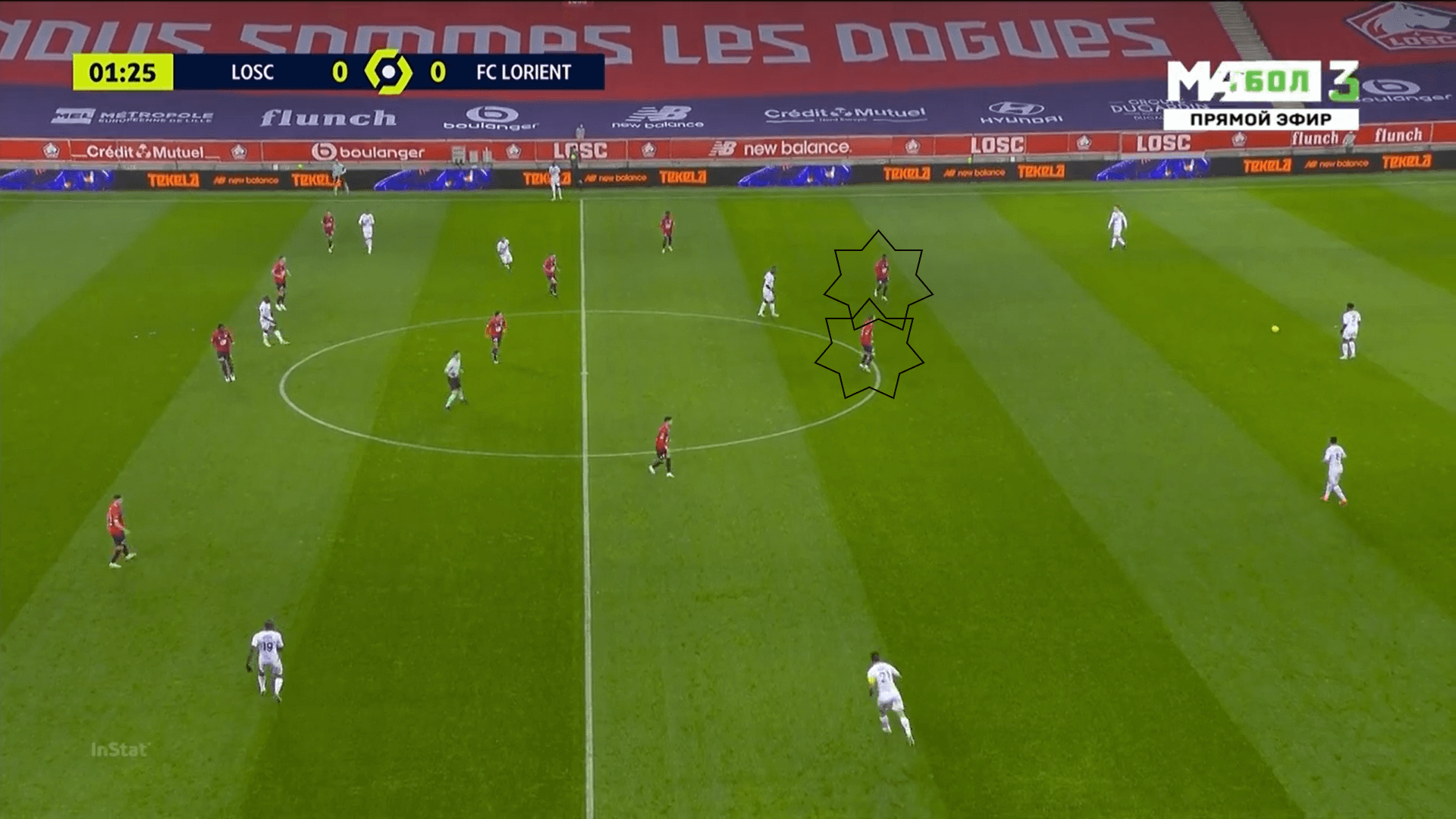 However, after a while, they decided to press high and remained at a high intensity for the rest of the game. Their high press was quite effective as they recovered some balls high up the pitch and created danger.

In the image below, we see how each striker is with a centre-back and that the right-winger is marking the Lorient left-back. This pressure is effective because Lille time it very well. Once the centre-back passes it to a full-back, three players sprint to their markers to suffocate the play on that wing.

This means that when the full-back receives the ball, he is marked and has no close possible options. Therefore, he is bound to make a bad pass or try to dribble his marker. In this example, we observe how the Lille right-back is ahead of the Lorient winger because he anticipated this pass with his pressing movement. This recovery then led to a dangerous play. 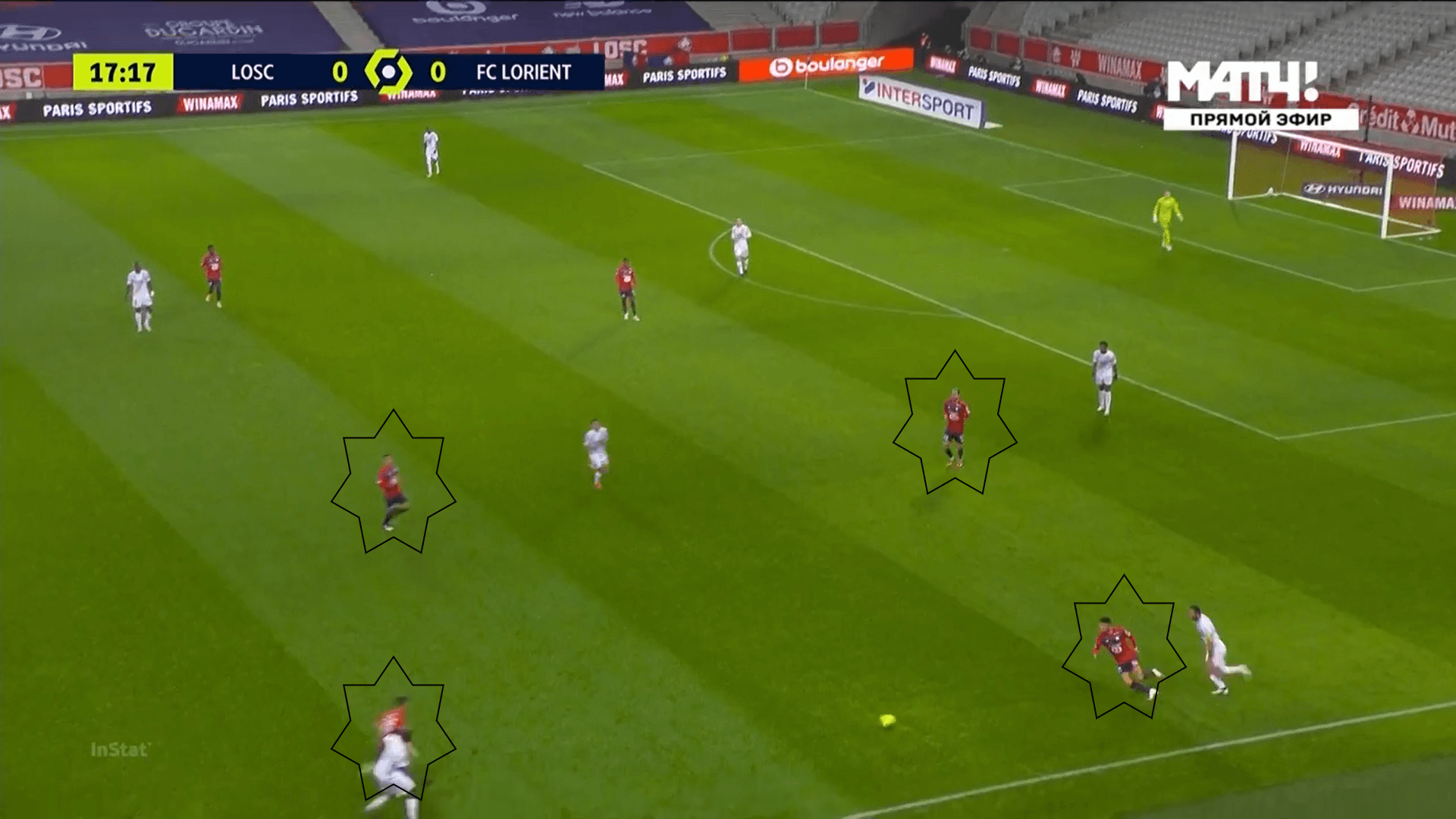 Throughout the whole game, Lille was at a higher intensity level than Lorient and was winning most of the duels. This is partly due to the formation used, which is the 4-4-2. This formation promotes for the team to be compact, which means that when the ball is in the midfield, there will be more Lille players in that area to battle for it.

It is true that Lorient also has two lines of four players in their 4-4-1-1, but they were not a compact team at all as well as them not being defensively solid, which we will see later.

This higher intensity and compactness from Lille is clearly seen in the image below, where there are five Lille players surrounding the ball compared to Lorient with only two players in that area. 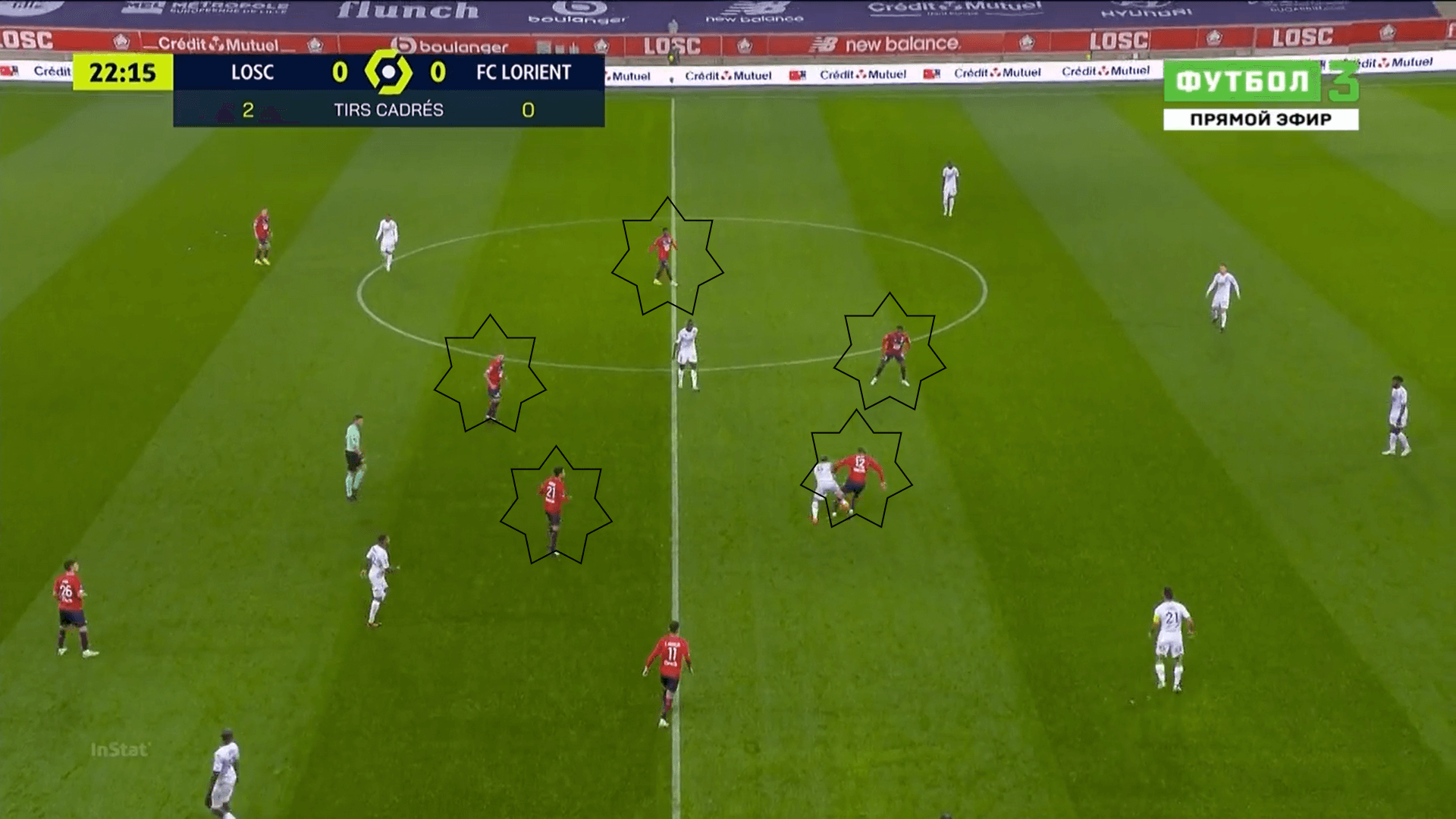 Moreover, in the first half, Lille tried to keep Lorient in their own half. For a substantial amount of time, Lorient was not able to pass the halfway line because Lille was being aggressive in their counter-pressing. Lille attempted to do what Barcelona do and did so successfully.

This strategy consists of smothering Lorient’s attacks as soon as they recover the ball. Once again, this requires a compact team, and so Lille moved their whole team into Lorient’s half. An example of their effective counter-pressing is seen below, where the Lorient player is trying to start a counter-attack, but there are three Lille players around him. 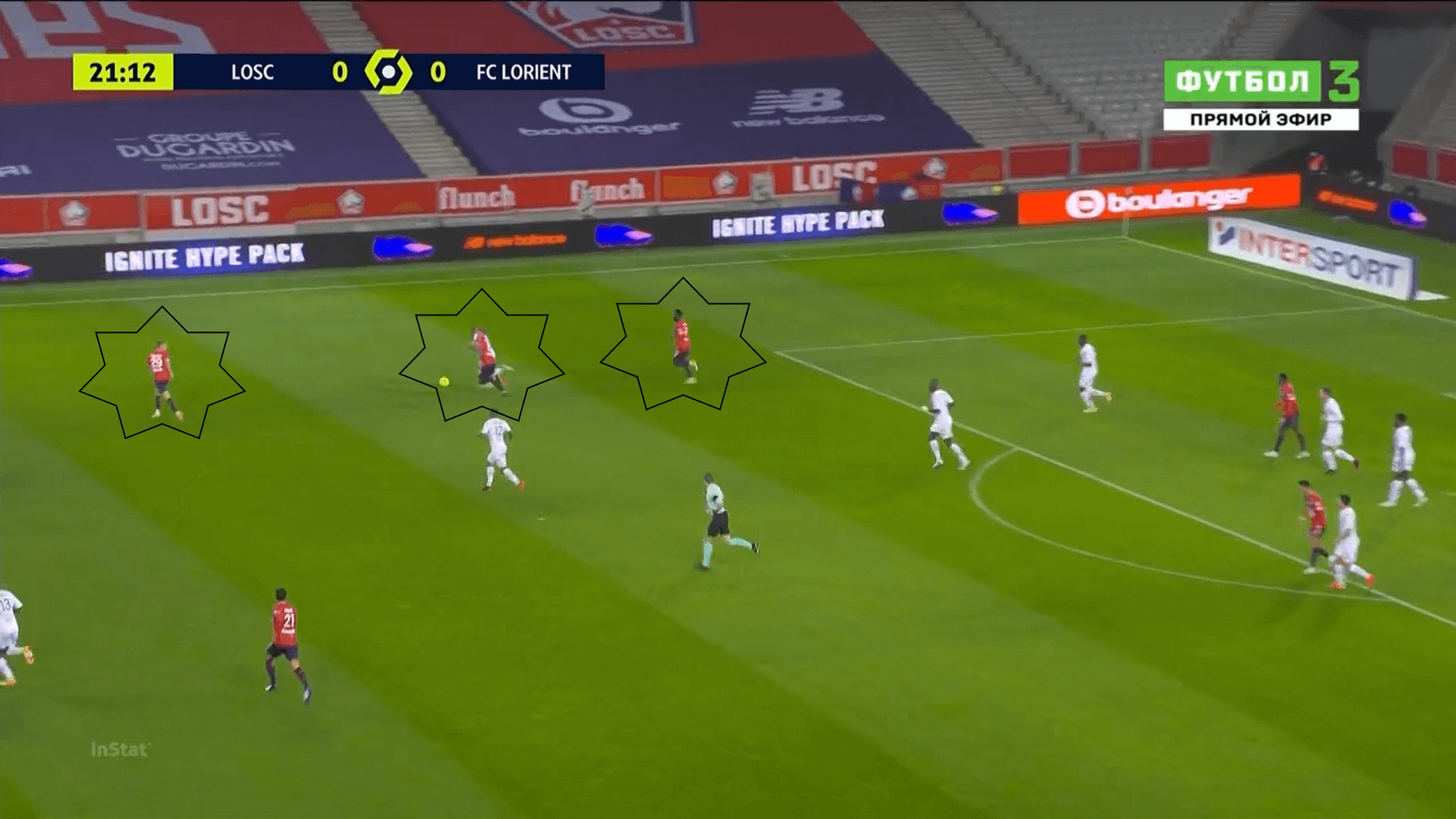 Also vital to this tactic is Lille’s centre-backs. They have to be very solid as they were in Lorient’s half of the field, and if Lorient had a counter-attack, there would be a lot of space for them to run into. Luckily for them, Lorient only had one striker, and so they could manage him by having a superiority.

With the centre-backs winning the ball again in Lorient’s half, it is very threatening because they can quickly start another play in an advanced area when Lorient was starting to go up in case of a counter-attack. This means that the centre-backs would quickly go on the attack against a dismantled Lorient team.

The image below serves to show how far up the Lille team was dominating Lorient. The centre-backs are fighting for the ball against the sole striker, and the whole Lorient team is stuck in their field. Such was the dominance of Lille. 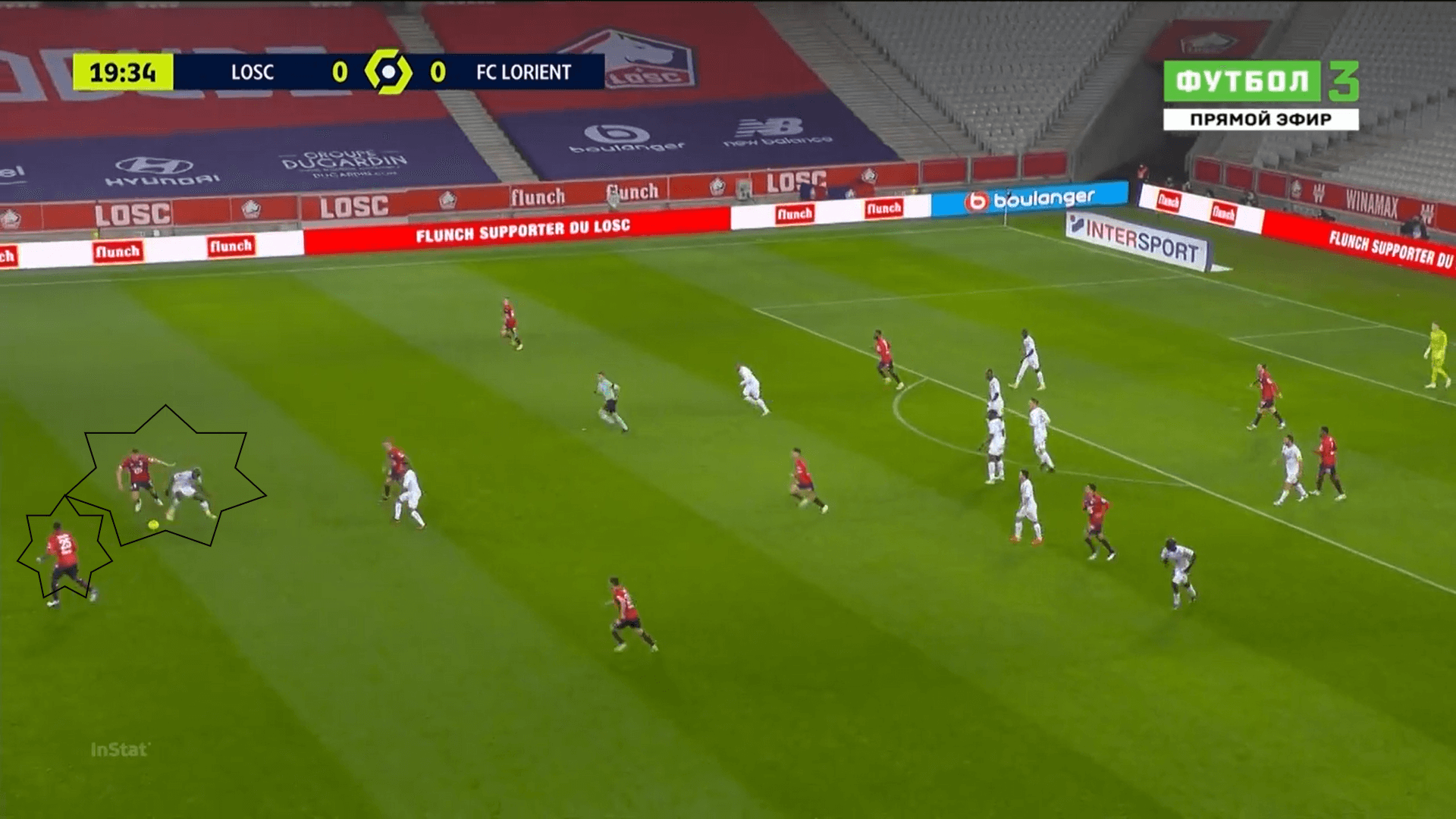 Lille maintained this high intensity for the whole game. In fact, their last goal in the last minutes came from a recovery very high up the pitch.

Below, we can see how there are four Lille players pressing in the 88th minute and manage to steal the ball. This is admiring because they were winning 3-0 comfortably but still wanted to press high and score more goals. 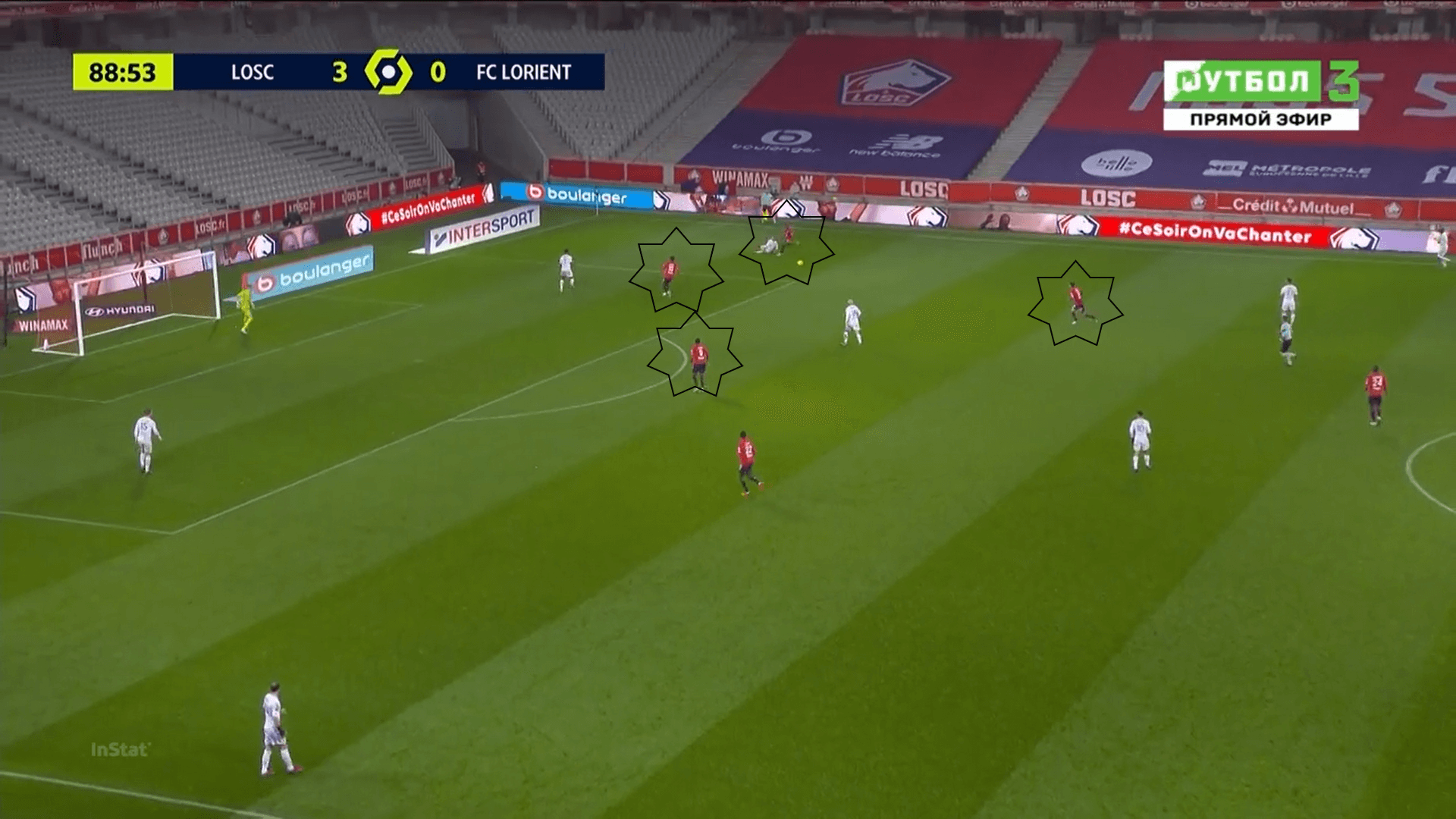 In the first half, Lorient was very inferior to Lille. This was due to a lack of intensity and lack of ideas. This lack of intensity made their pressing pointless. They set their team in a medium-high block but had problems defending on the wing.

Below we see their positions on the pitch, how the attacking midfielder has joined the striker to make the team a 4-4-2 when pressing. 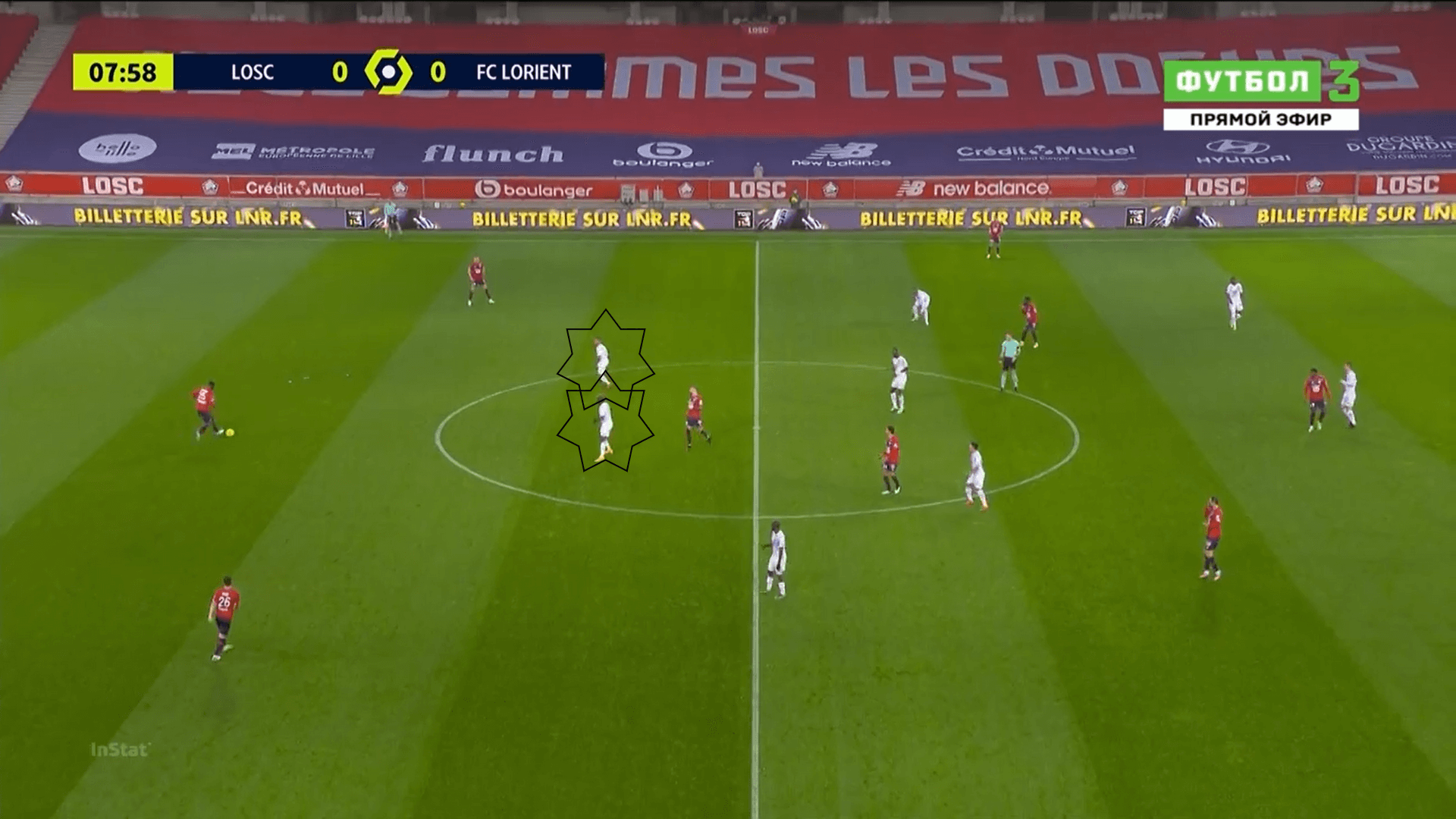 However, Lille was smart in knowing how to break their pressure. They essentially made their team into a 3-4-3 formation in the build-up. They would make their left-back push-up, and their right-back would drop to become another centre-back. This was done to have superiority over the two strikers to make playing the ball among centre-backs easier. This is seen below. 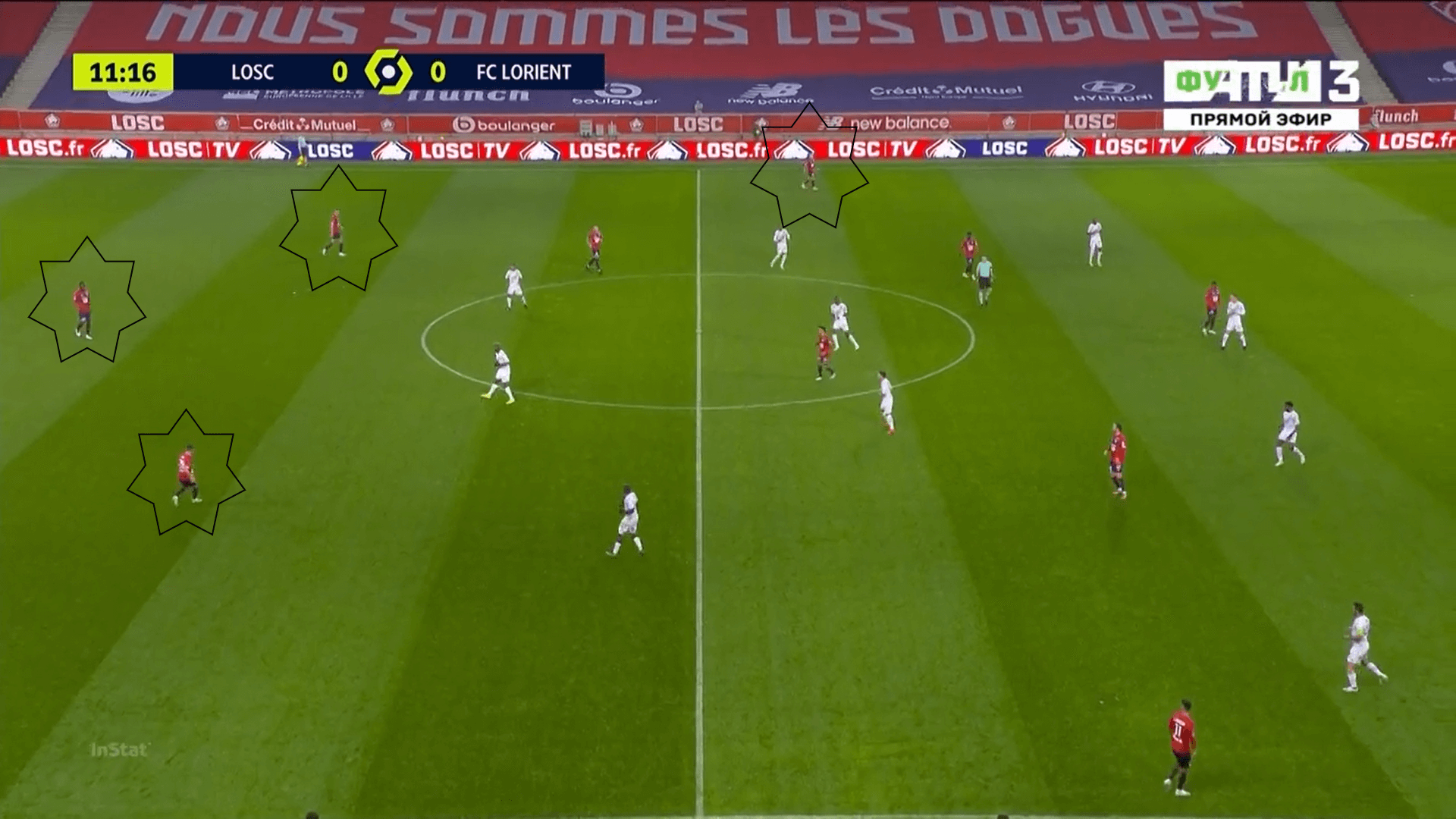 Furthermore, this made the left-winger and Yusuf Yazıcı come inside. The latter is a striker, but when building up, he became a right-forward. Then, the left-back would become the left wing-back, and the right-winger would become a right wing-back.

By forcing the left-back up, it made the Lorient right-winger follow him backwards. This meant that the left centre-back could easily come forwards and look for a good pass. Since no striker went to press him, it happened a couple of times when he had a lot of time to think and make a good pass.

The image below serves as a good example. With the centre-back coming up and no striker going to mark him, it made the Lorient midfielders close the middle more. That is when a Lille midfielder would come in to receive the ball alone and could make a pass through the middle to the left-winger.

This happened a few times during the game and left the winger or another player alone in between the lines and able to turn to create danger. Looking back, one of the strikers should have gone to press the centre-back as he created a superiority in the left side when he went up. 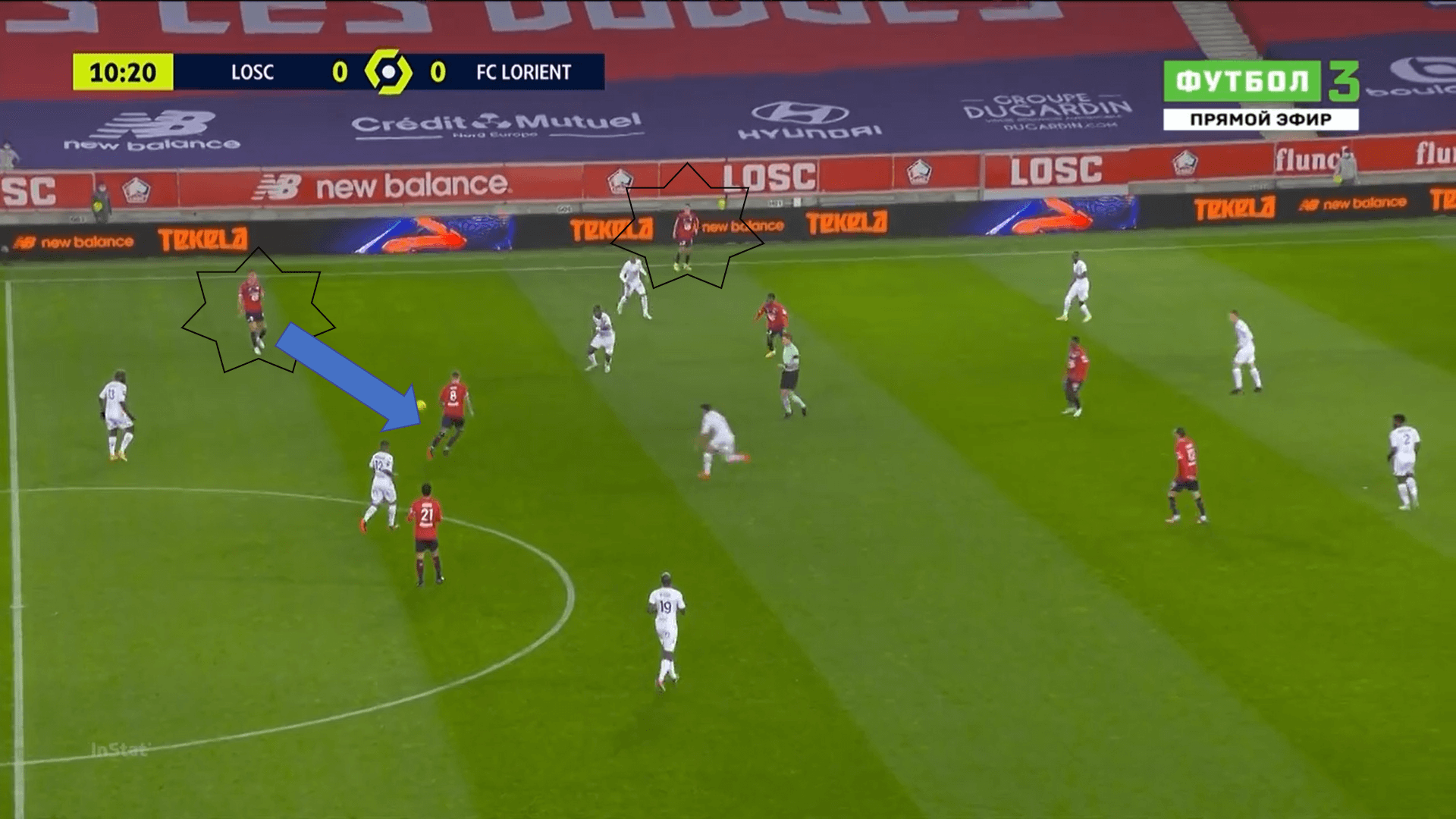 It was only in the second half when they decided to press high and in a good manner. They started doing so when they were already losing 3-0, so it was too late. When they did this, however, both the striker and the attacking midfielder marked a centre-back. At the same time, a winger would mark the full-back and a midfielder would come to mark the Lille midfielder coming in. This is shown below. 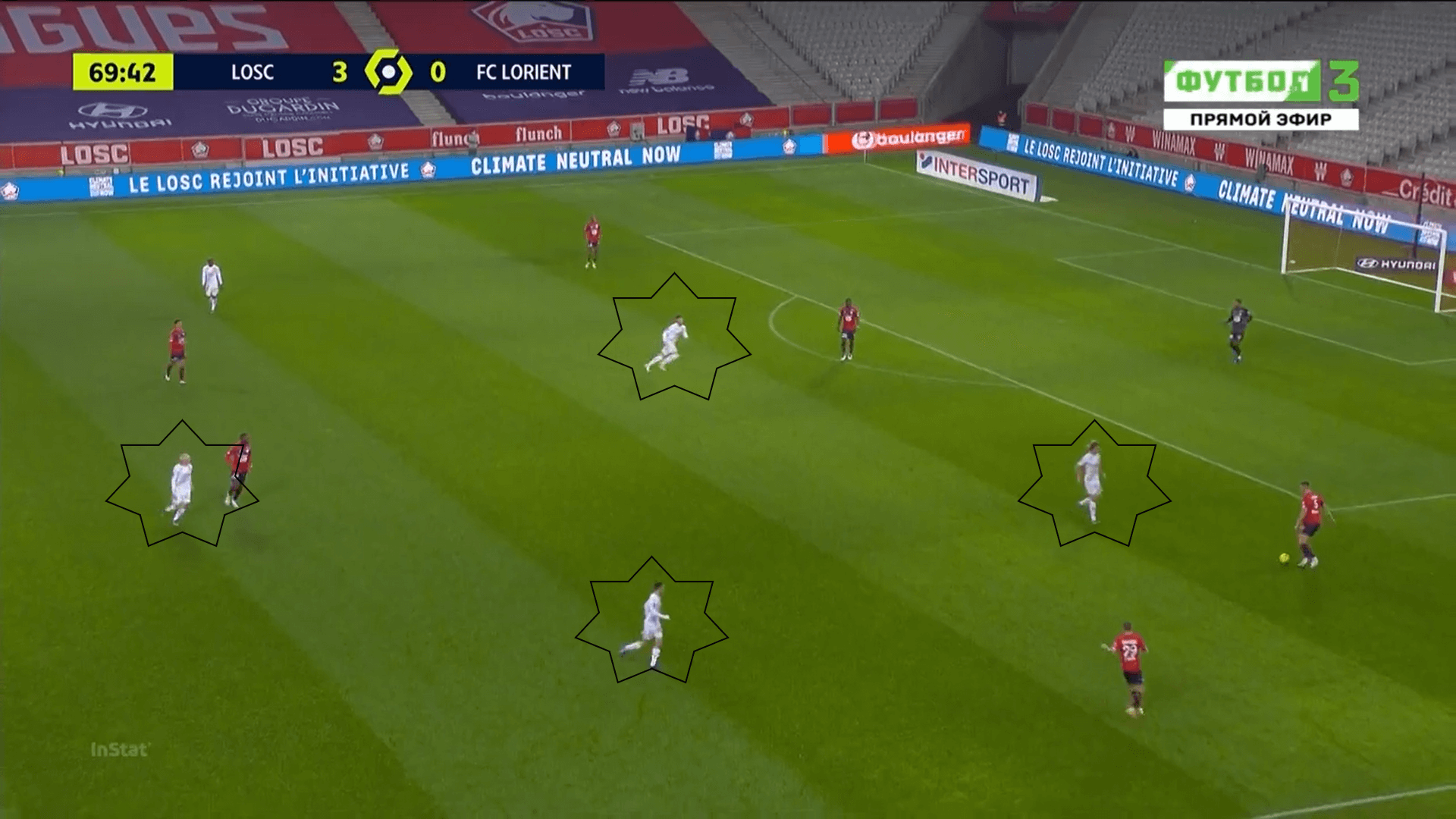 With Lorient not holding their shape, Lille had an easy way to get through the middle, which is the most dangerous place to attack from. They have talented players who are able to receive the ball between lines and turn to be a threat.

This is connected to the fact that they were able to make quick passes in the middle to get past the Lorient team, which dismantled them quite a few times. This was due to Lille making their wingers come inside and having strikers who like to receive the ball but also because of Lorient’s defensive weakness through the middle.

In the image below, the Lille midfielder is allowed to make an inside pass to the striker who then drops it back to the other midfielder for him to pass it to the right-back that is open out wide. All this was done easily as the Lorient midfield is not compact but dispersed throughout the pitch. 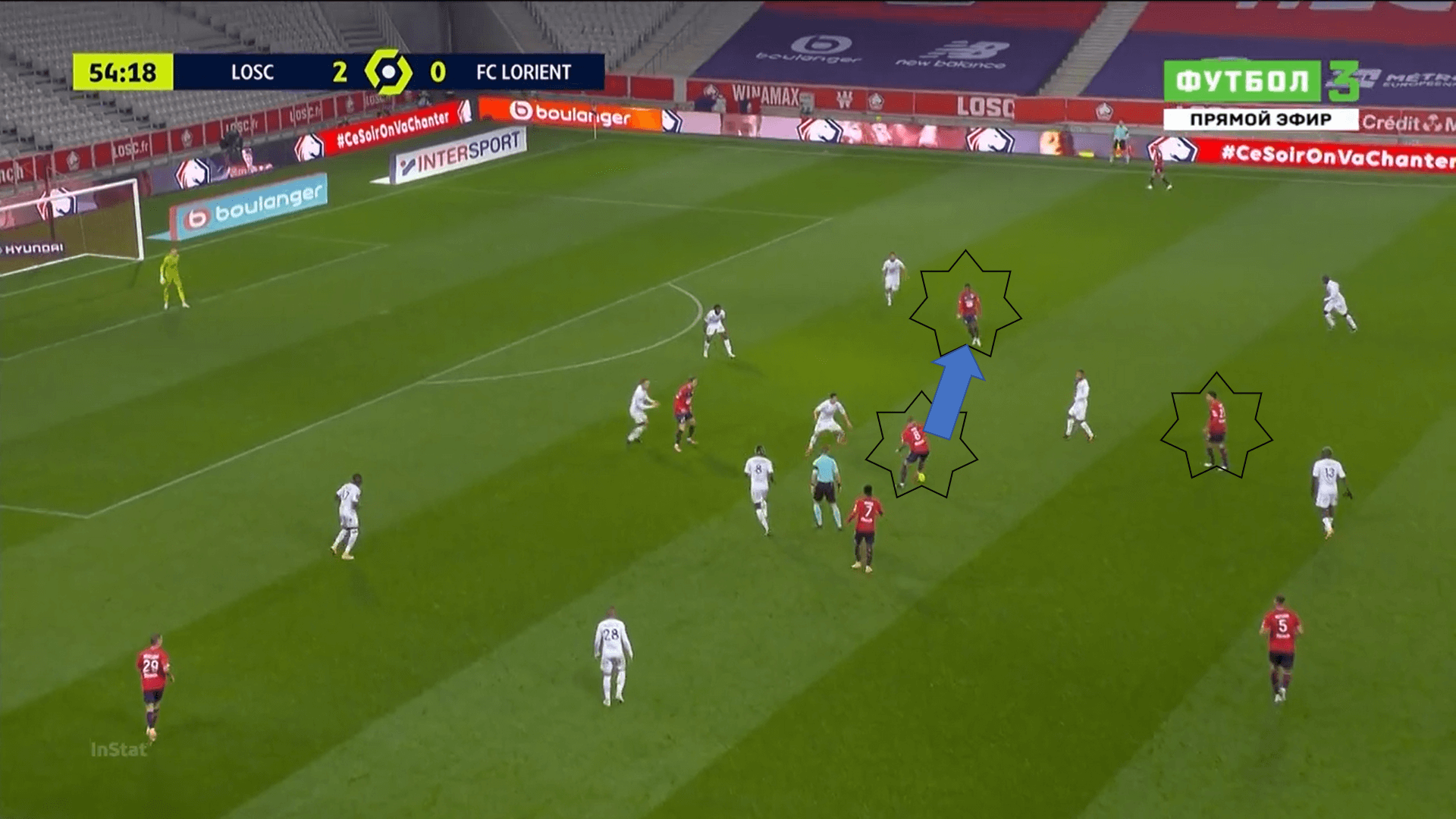 Also, Lille was a danger in attack because they attacked with many people, thus creating superiorities in many parts of the pitch. This superiority means that they usually have various attacking passing options.

This attacking superiority connected to how badly Lorient was defending that day means that they had many chances to do 2vs1 or similar situations. For example, the image below shows how many Lille players are attacking a cross. There are five Lille players in the box and actually have superiority in the area if a cross was to be done. 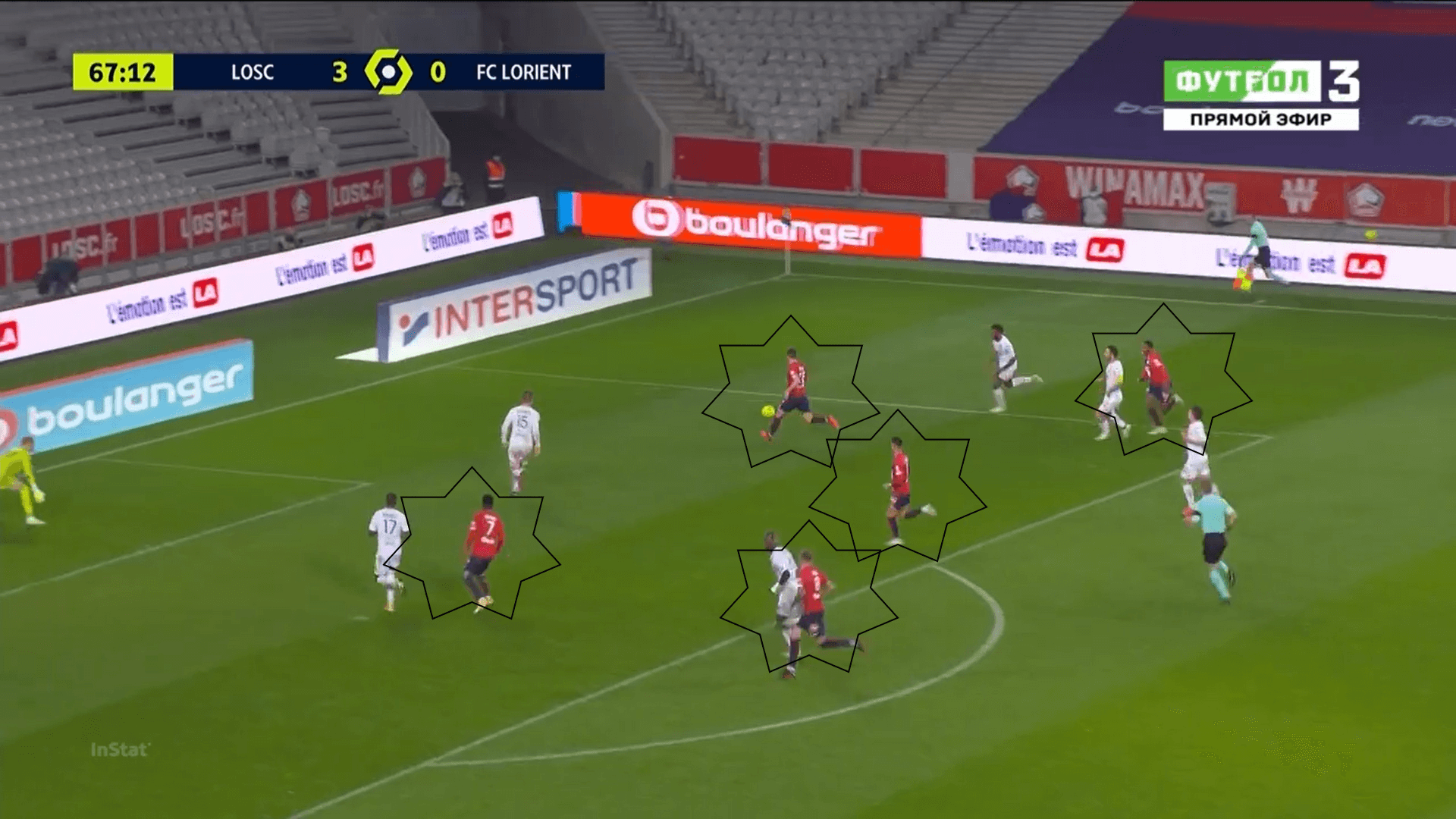 Lastly, Lille was effective in starting a counter-attack and ending it. It is clear that it is an important part of their game because they also went up in numbers for these. Having a 4-4-2 formation means that you always have two strikers up front for the possible counter-attack.

In the image below, it is the 81st minute, and once again, five Lille players are sprinting towards the goal to help in the attack. This shows how strong the desire in the team is because in the final minutes and winning comfortably, they are tiring themselves to be able to finish an attack. 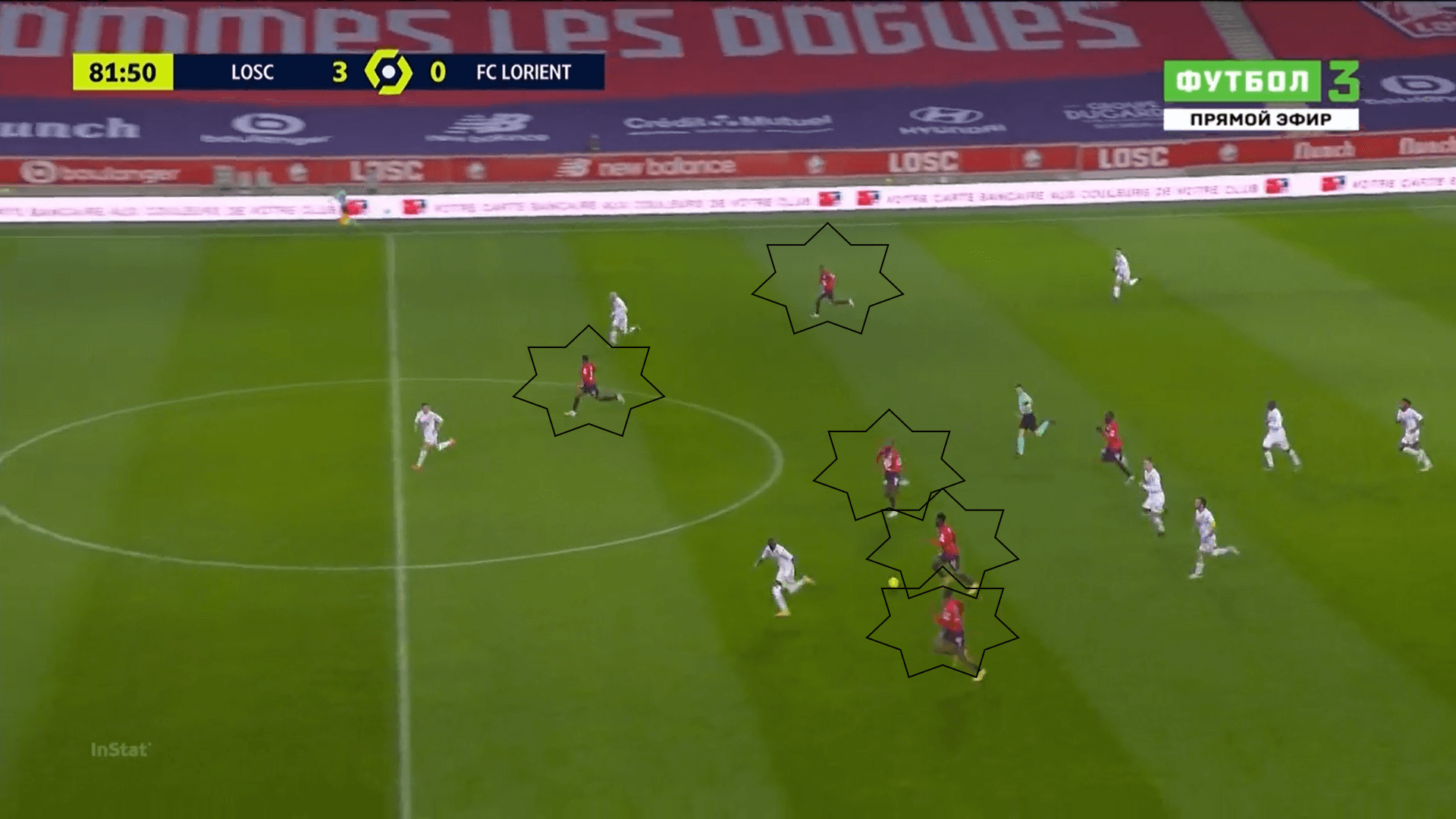 Overall, Lille was very superior to Lorient in this game because they had clearer ideas and higher intensity in the whole game. Lille managed to break the Lorient pressure and were able to go through the middle to create danger. Lorient however, barely created danger and could not build-up well because of Lille’s pressure. It will be interesting to see how Lille uses the confidence from this game into the Europa League game.