Royal Antwerp travelled to the Belgian coast to face off against KV Oostende in the Belgian Pro League on Saturday. Oostende have improved drastically under their new coach Paul Blessin and were able to deny Ivan Leko’s Antwerp team, who have started to gain some momentum as the season has progressed. One impressive result over the past few weeks was certainly their victory over Tottenham Hotspur in the Europa League.

This tactical analysis will look at how Oostende’s tactics were to keep their strikers high up the pitch. The analysis will also explore how Antwerp were using their wing-backs, and how this helped create their equaliser, which came after some good counter-pressing from the home side had helped to give them the lead. 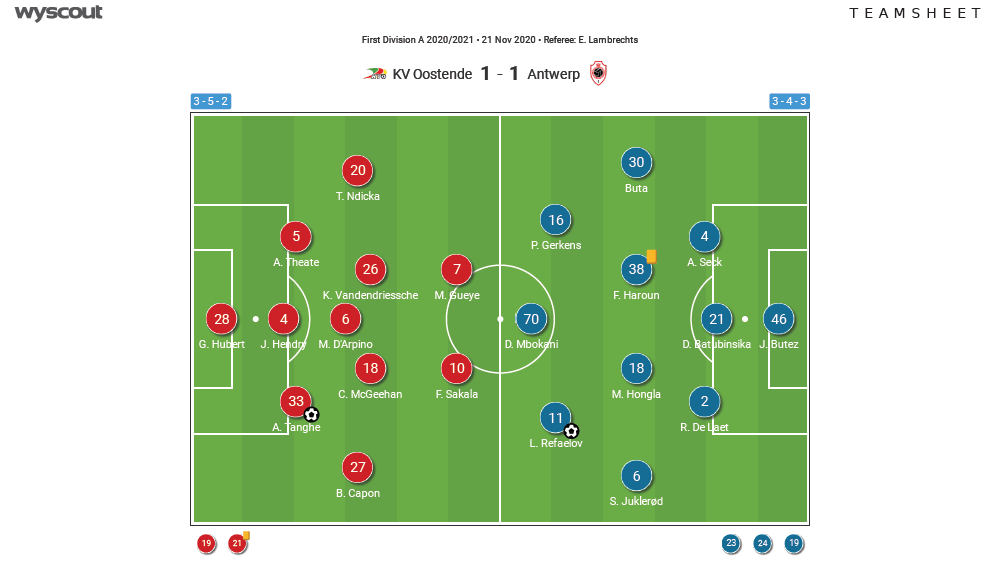 Blessin went for a 3-5-2 formation to start the game, with Guillaume Hubert in goal. In front of him was Celtic loanee Jack Hendry, alongside Anton Tanghe and Arthur Theate. Theo Ndicka and Brecht Capon were the wing-backs, with Kevin Vandendriessche, Maxime D’Arpino, and Cameron McGeehan in the central midfield three. Fashion Sakala and Makhtar Gueye were the two men up top.

Leko went with a 3-4-3 formation, with Jean Butez in between the sticks. Abdoulaye Seck, Ritchie De Laet, and Dylan Batubinsika were the three-man defensive group, with the impressive Simen Juklerød on the left and Aurelio Buta on the right. Faris Haroun and Martin Hongla were the two central midfielders, with Dieumerci Mbokani, Pieter Gerkens, and Lior Refaelov as the front three.

Oostende have been known to press this season. Over the summer transfer window, they recruited younger players to improve the energy and athleticism in their squad. As a side, Oostende like to use McGeehan and Vandendriessche as the pressing two in midfield, but what is interesting is that they don’t require either of the two strikers to drop in and help. Instead, they like to keep both Gueye and Sakala up top, as we see below. 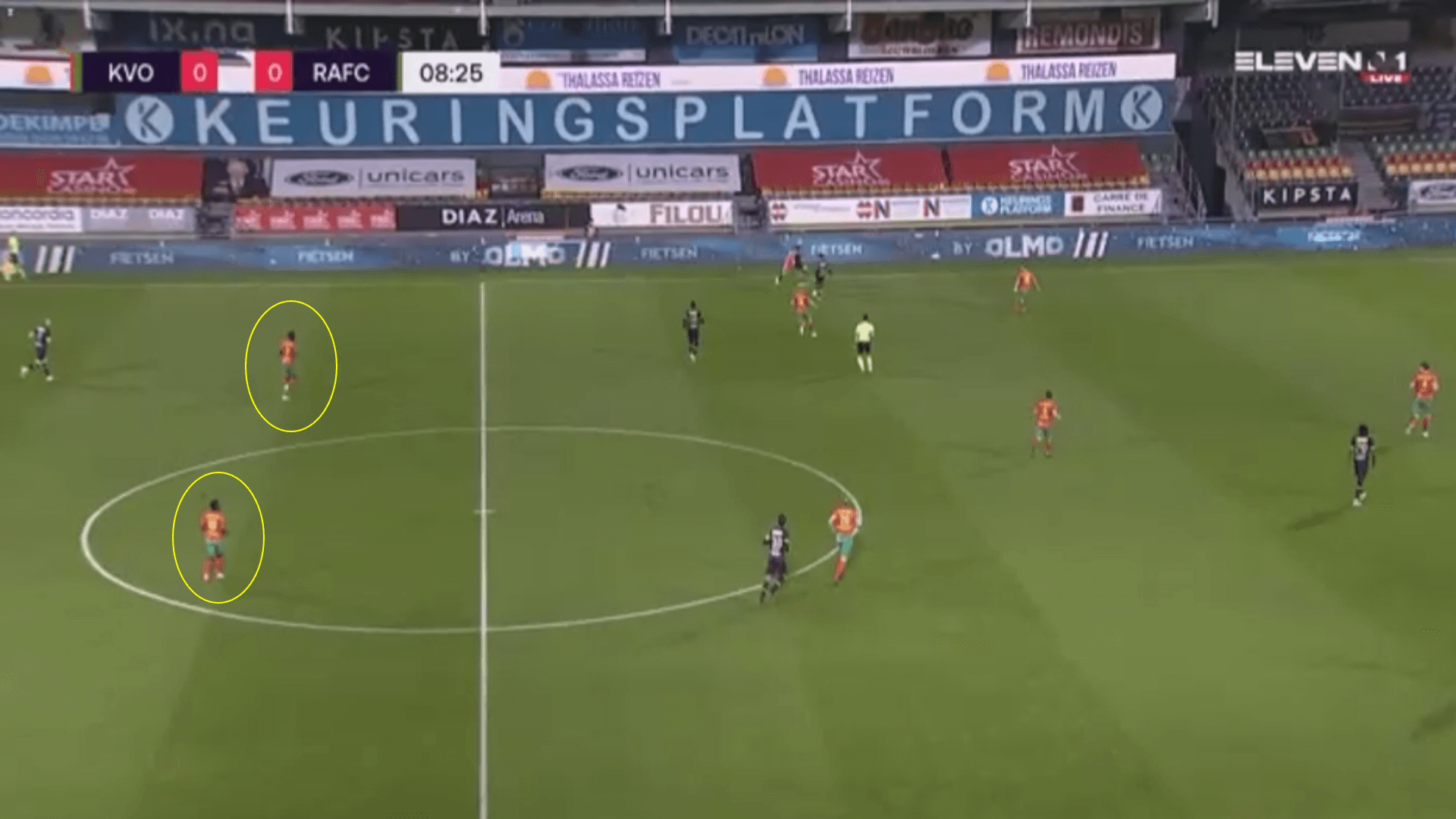 This is because Oostende want to hit their opponents on the counter quickly when they get the ball. Matching up against a back three, they have two strikers who are willing to run into the channels and stretch the defenders. It then appears that the two midfielders mentioned above, as well as the wing-backs, are expected to push forward in support. There is potential for this to catch opponents off guard and cause overloads, as well as create opportunities where players aren’t marked closely as they get forward.

For example, as we see below, Sakala is on the ball, having run into the channel. We see that the wing-back, Ndicka, has overlapped whilst both Vandendriessche and McGeehan are also ahead of the striker. Sakala moving out wide has the potential to create gaps in the Antwerp back three, if he is able to pull one of those central players out wide. Thankfully for the away side, in the situation above, Buta was alive to the danger and covered Sakala. Yet, Ndicka pushing on means that the player Buta is meant to mark is now also potentially going to pull a central defender out of position.

By keeping their mobile strikers high up the pitch, it was clear Oostende wanted to use their mobility and dribbling ability to try and hurt Antwerp with quick attacks. Unfortunately for the home side, they did not manage to create a goal with this tactic in the first half, as part of it relies on the side winning the ball back from Antwerp in the first place.

With Mbokani up top, Antwerp had a willing runner and strong hold-up player. In order to support him, the creative Refaelov and Gerkens were expected to play close to the striker. In order to avoid congestion in the central areas, Buta and Juklerød were pushed high up the pitch and expected to stay wide. In the first half, this helped Antwerp in stretching the play, as well as allowing players like Refaelov to create by switching to the flank where possible.

We see one example below, where both the wing-backs are the two furthest players forward. With Oostende also utilising a back three, it meant that their full-backs needed to be defensively diligent in tracking their runners, so as to avoid any overloads. However, when having to defend, Leko’s wing-backs were expected to drop back in to create a back five, as we see below. This required plenty of running and tactical nous from both players, as they had to weigh up when they could push forward. Both players were therefore in a crucial position for Antwerp, as they were responsible for creating width going forward, but also minimising the space for Oostende when in defence. This is another reason why Oostende were looking to keep their strikers high and look to attack quickly, trying to take advantage of the wing-backs playing so far up the pitch. 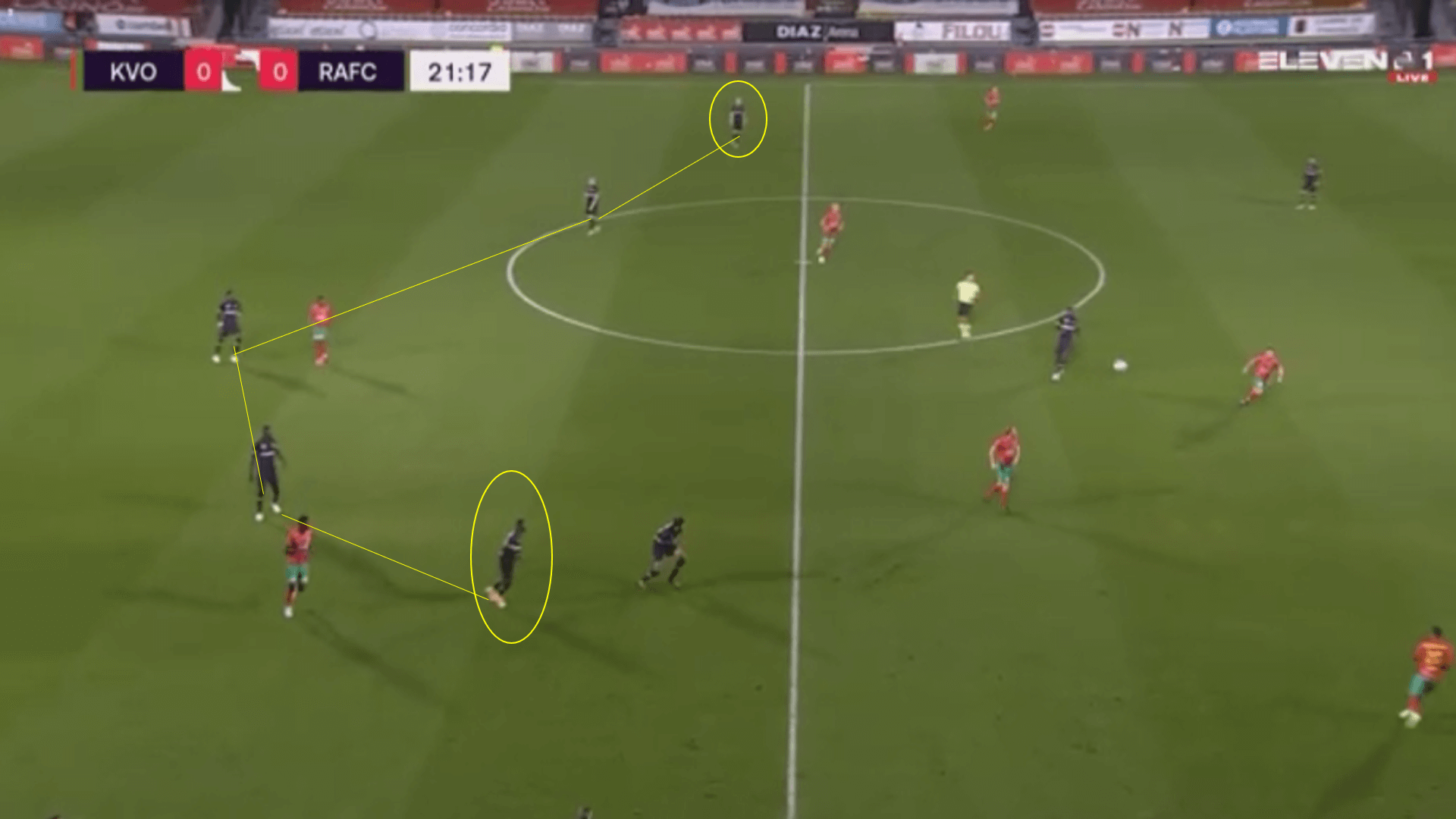 Keeping these players wide helped Antwerp to draw level in the game. We see Miyoshi in the picture below, having been pulled out wide, which has created a three-on-three of Antwerp attackers and Oostende defenders on the edge of the box (circled). 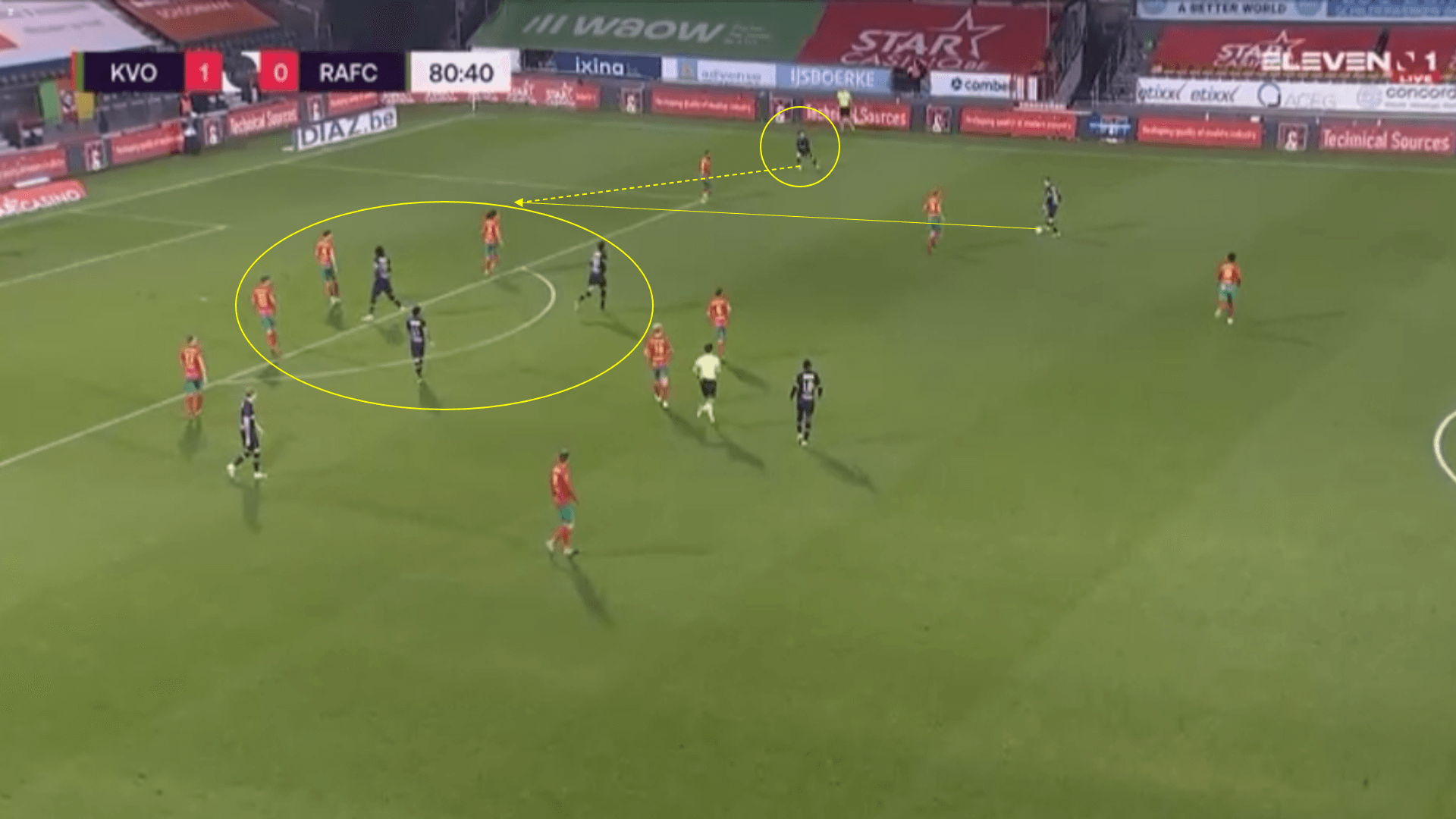 One ball in between the centre-back and the Oostende wing-back releases Miyoshi, as we see below. This then drags Theate out of position, as he has to close the attacker down, which in turn creates space for Refaelov in the middle to turn the cross into the net. The space for Refaelov was only there because of the width Antwerp are set up to create tactically. 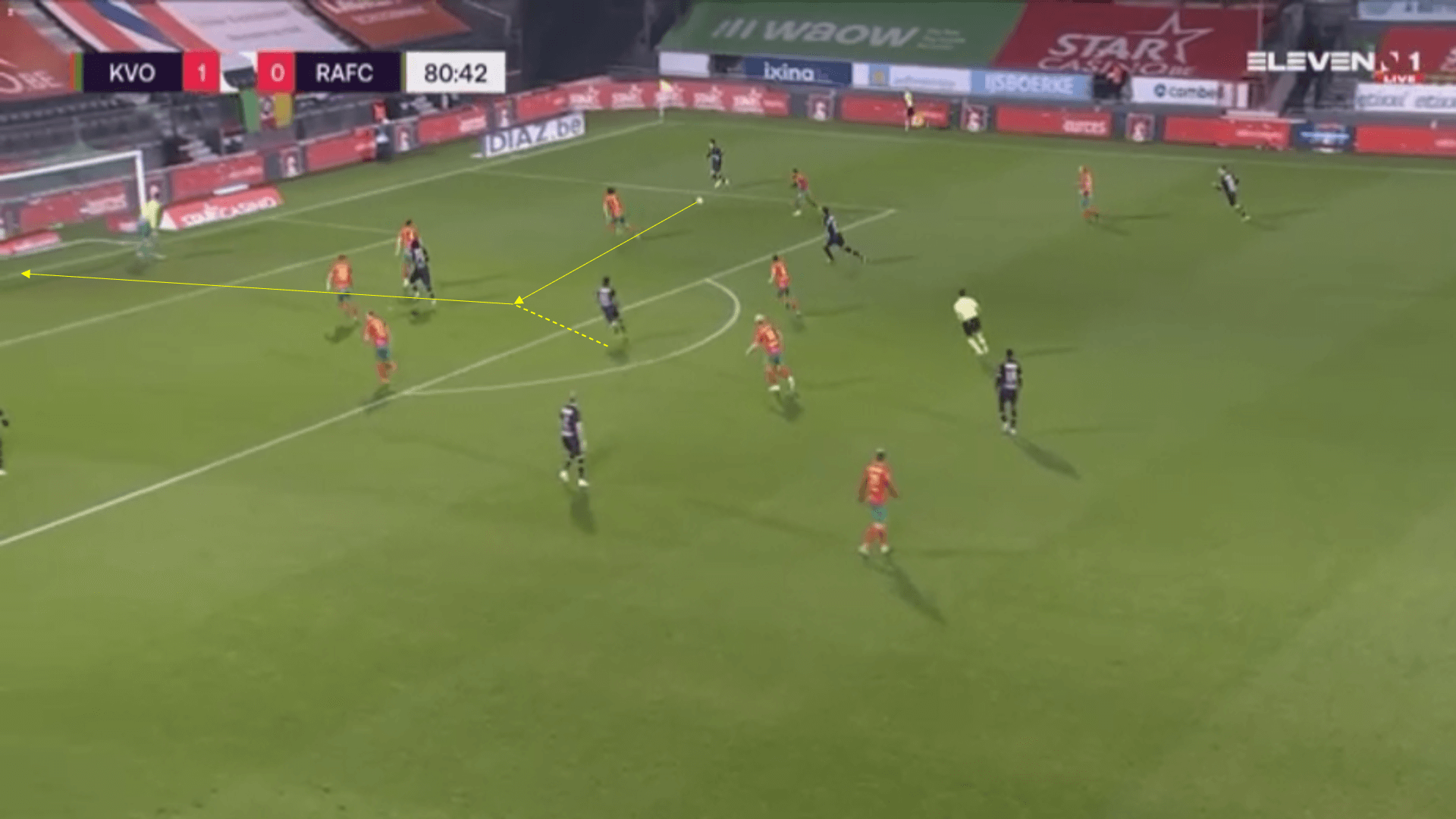 Another feature of Oostende’s game this season has been counter-pressing. One player they particularly use for this is McGeehan, who has excellent energy and reading of the game required to carry this out. They lead the league in pressing intensity with 6.05, and it was one of the main reasons they were able to take the lead in the game.

We see substitute Nana Ampomah of Antwerp below, who has picked up the ball following a cross. At face value, Antwerp look to be in a good position to play themselves out, as there is a player Ampomah could find inside, or he could use his dribbling and pace to push past the Oostende player on the outside. McGeehan, circled in the central areas, is some way away from the play, but we can see he is on his way to help press. 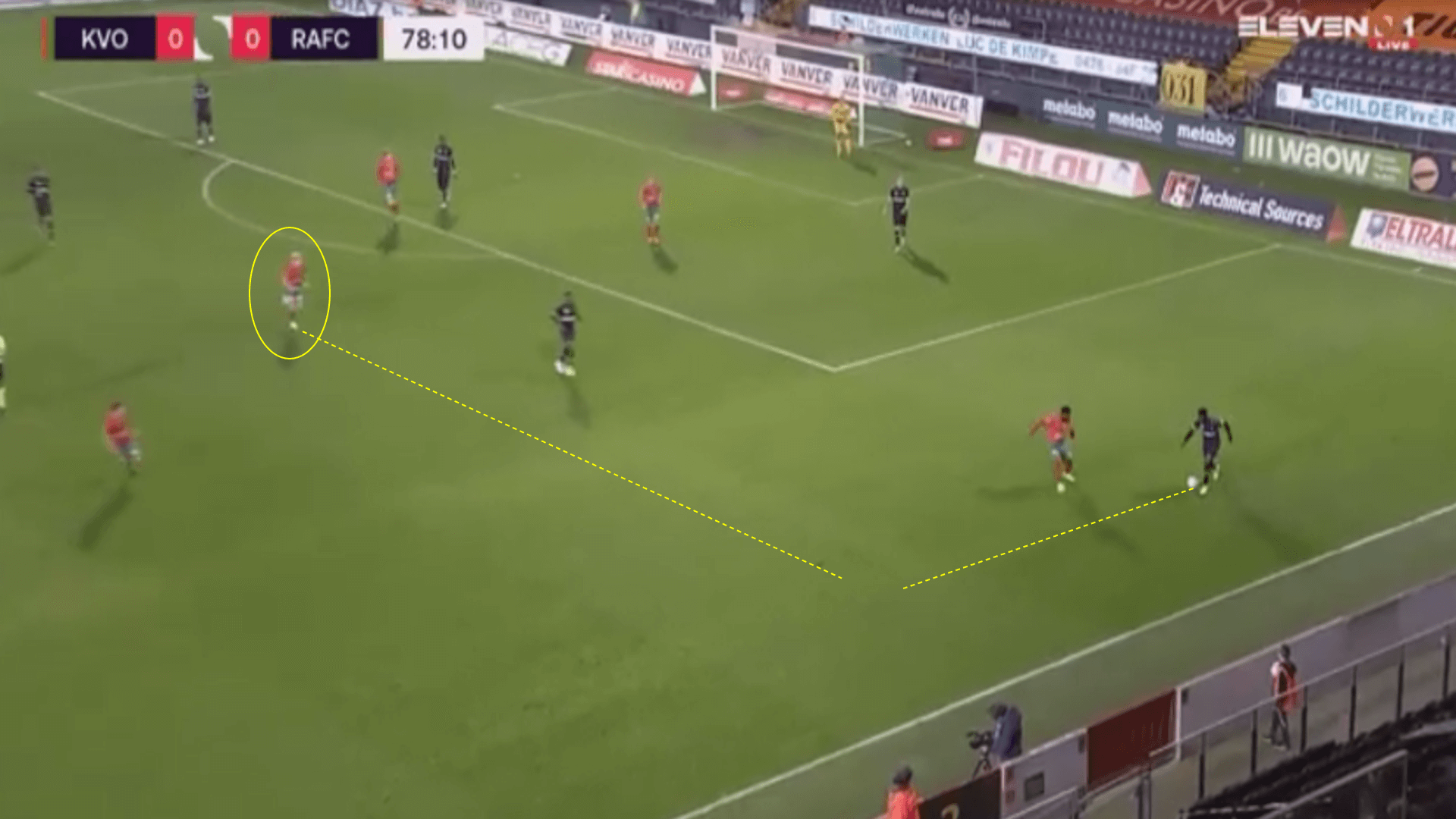 McGeehan is quick in getting over and is able to support Mamadou Thiam, who managed to slow Ampomah down before he could clear the ball. The tackle is timed to perfection, and Oostende have now recovered the ball high up the pitch in a dangerous attacking situation. McGeehan is then able to find Thiam, whose cross is put behind for a corner from which the home side take the lead. 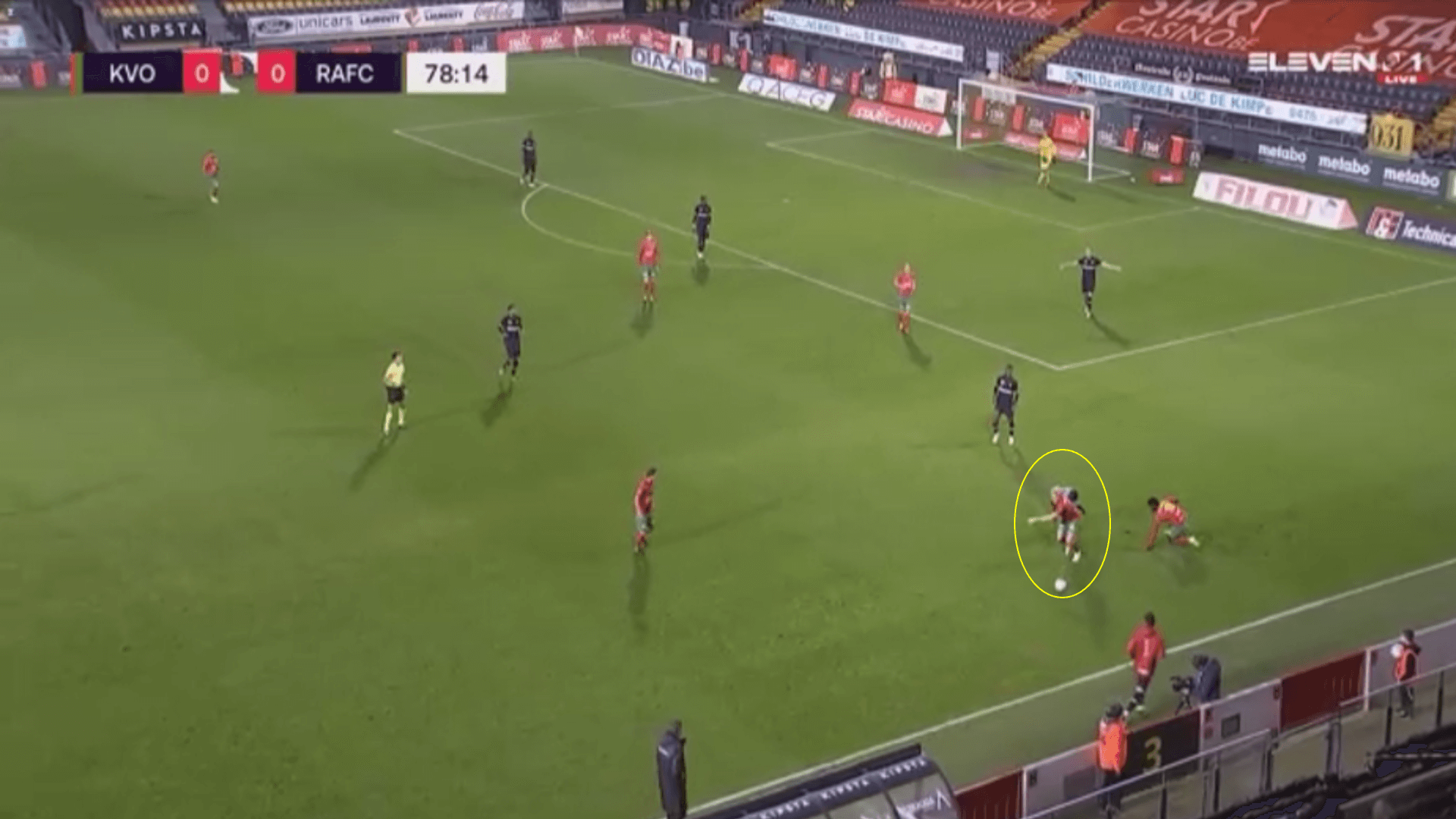 Intense pressing like this is why Oostende leave the strikers high, as we mentioned before. They are looking to win the ball back in these areas and then create overloads, as they do here. When Thiam picks the ball up, we see that the Antwerp back three are all having to man mark. However, because Thiam has got past Ampomah, he creates an overload if he drives further into the box. Unfortunately for Oostende, he decided to cut back and cross rather than exploiting the overload further. Luckily, the corner did result in the opening goal. 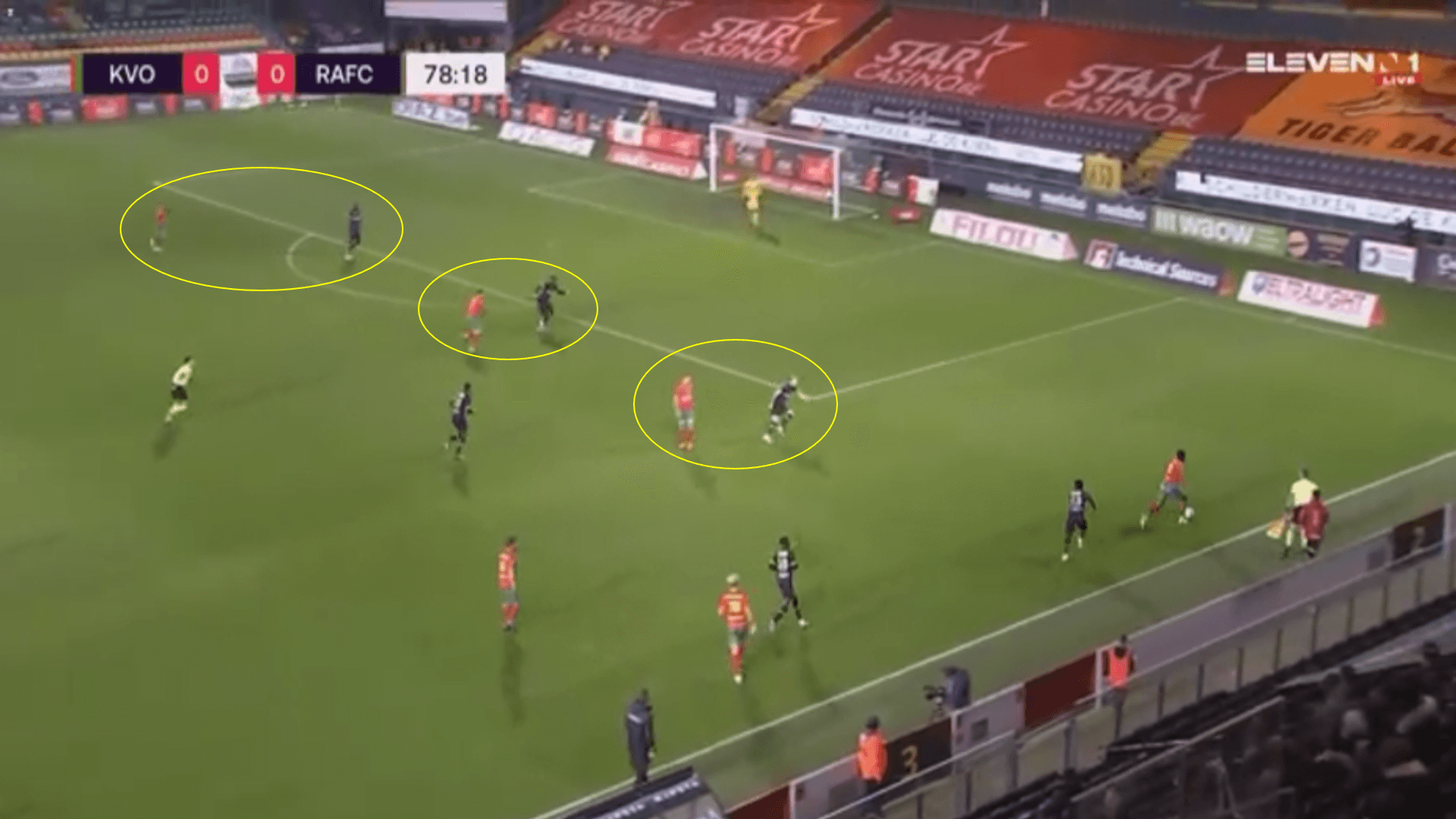 Oostende’s intense pressing makes them one of the most enjoyable sides to watch in the Belgian league, as they are always looking to put pressure on their opponents and make things happen.

Oostende have come a long way since last season, and their ability to go toe-to-toe with Antwerp is another clear sign of their improvements. Neither side created enough to warrant winning the game, with a draw being the fair result. Oostende will probably be more disappointed in the fact that they only managed to hold their lead for around a minute before conceding.