The first round of MLS playoffs served up a slew of entertaining games. The first meeting between Portland Timbers and FC Dallas this season was no different. Portland finished the season in third behind Seattle and a resurgent Sporting KC, while Dallas battled their way to playoff qualification, finishing in sixth.

Led by Venezuelan Giovanni Savarese, the Timbers were victorious in the MLS is back tournament. Exiting the 2019 playoffs in the first round, Savarese was looking to guide Portland to place in the final.

Luchi Gonzalez’s gang of veterans and academy players were embarking on their second postseason campaign. Last season they came close to beating Seattle, ultimately falling 4-3. This would also mark Gonzalez’s second year working with the first team after years of being on the academy side as the director.

At the end of a very tense match, FC Dallas triumphed over Portland in the third-longest penalty shootout in league history. This tactical analysis will look at the attacking tactics behind Dallas’ first-round victory, and how Portland almost secured their place in the second round.

Savarese’s 4-2-3-1 was completely different in action than it was on paper. Although they were missing key players due to long term injury, the personnel available were more than good enough to carry out the game plan. The Timbers would count upon starting attacking midfielder Diego Valeri, as their main attacking weapon. Having scored seven goals with five assists, the Argentinian is clearly Portland’s talisman. At striker, Mexican Felipe Mora has also contributed heavily in Portland’s attacking phase scoring seven goals with three assists. 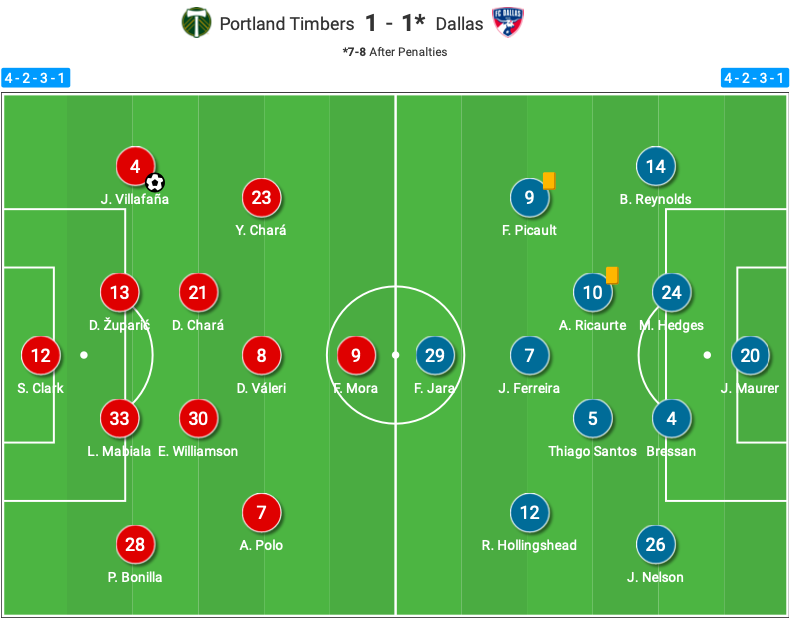 Dallas went with a lineup that had a similar look to the regular season game against Nashville. With John Nelson starting at left-back, Ryan Hollingshead started at left forward. Fafa Picault started on the right in place of right-winger Michael Barrios, while leading goal scorer Franco Jara led the line.

FC Dallas set themselves up in a 4-5-1 when in a mid and low block. Their tactic was to overload the central areas, forcing Portland wide. This tactic also looked to reduce space for runs behind their defensive lines, while setting Dallas up for counter-attacks.

Similar to Liverpool, Dallas is a team that executes a heavy press from the beginning. Their defensive approach against the Timbers was slightly different. Using the following sequence from the first half, we are able to see this tactic. 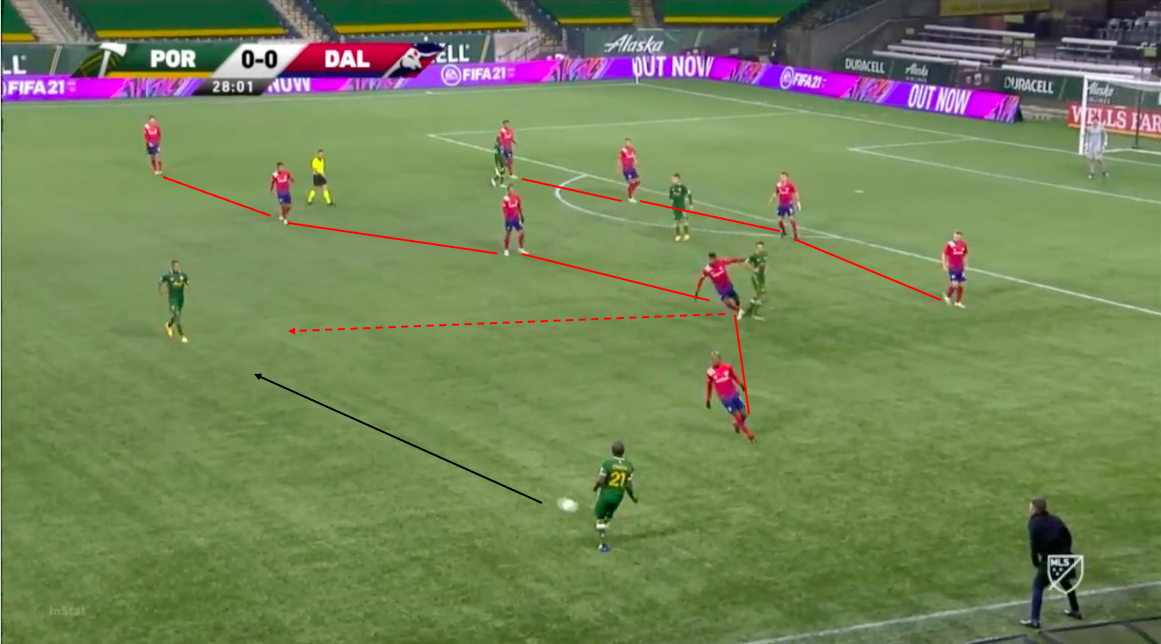 We pick up with Diego Chara about to pass to Andy Polo. Dallas defensive lines are clearly seen, with the midfielders creating a flat line of five in front of the four defenders. As the ball travels to Polo, Thiago Santos leaves Valeri to begin his press. Santos arrives as Polo is receiving the ball, denying the Portland player the ability to turn. The only option the Peruvian has under such defensive pressure is to play the ball backwards. Once the ball moves, the Dallas defensive block moves with it. This movement not only reduces the space to the opposition’s backline, but it also forces the Portland forwards to remain onsides and away from goal. 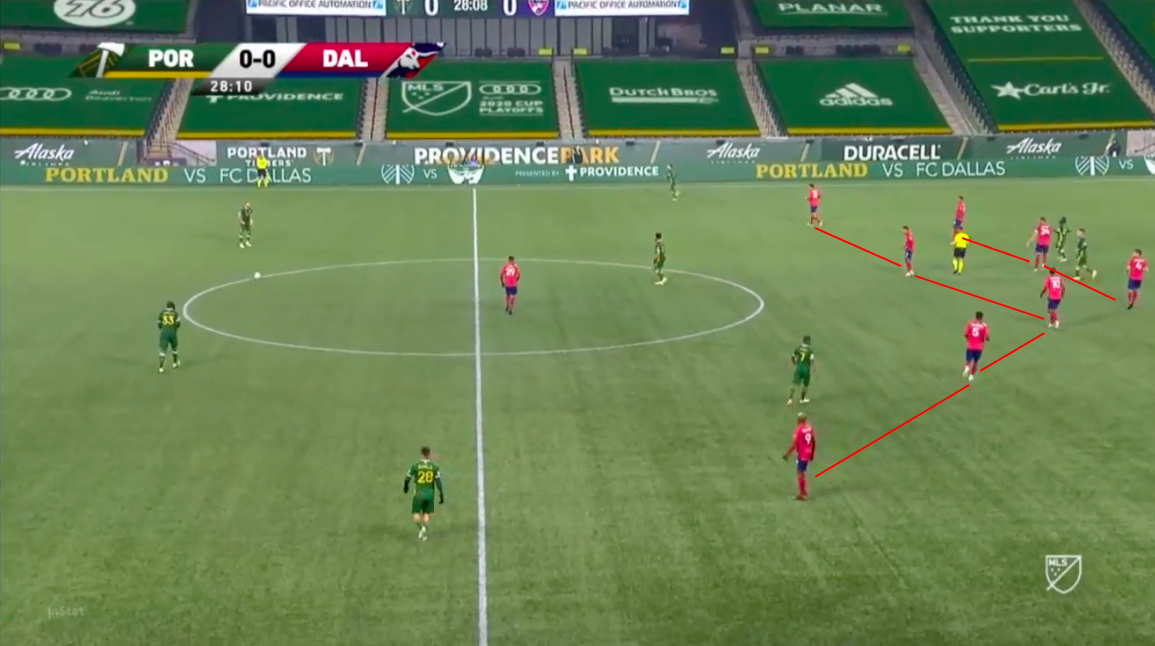 As the ball moves back to the Portland centre backs, we see how high Franco Jara stays. Although his defensive role was slightly passive, his real task was in transition. Since there are no short options available, Portland’s centre back attempts to play a long diagonal ball to Chara. This ball is over hit and Dallas restart with a goal kick.

In the following section of the analysis, we will take a look at the tactics Portland used to break Dallas down.

Due to the nature of Dallas’ defending, Portland was able to shoot 22 times, with only eight shots landing on target. To combat the Dallas defensive tactic, Portland attempted to pull the defence out of position with off the ball movement and rotation. Timbers were able to string together 463 passes in the attacking half, with 245 coming in the final third.

Portland always had a player as a wide option, with a further two in the halfspaces. As stated above, the aim was to draw defenders out of position to find the free man. Below we will see two different ways they executed this against the visitors. 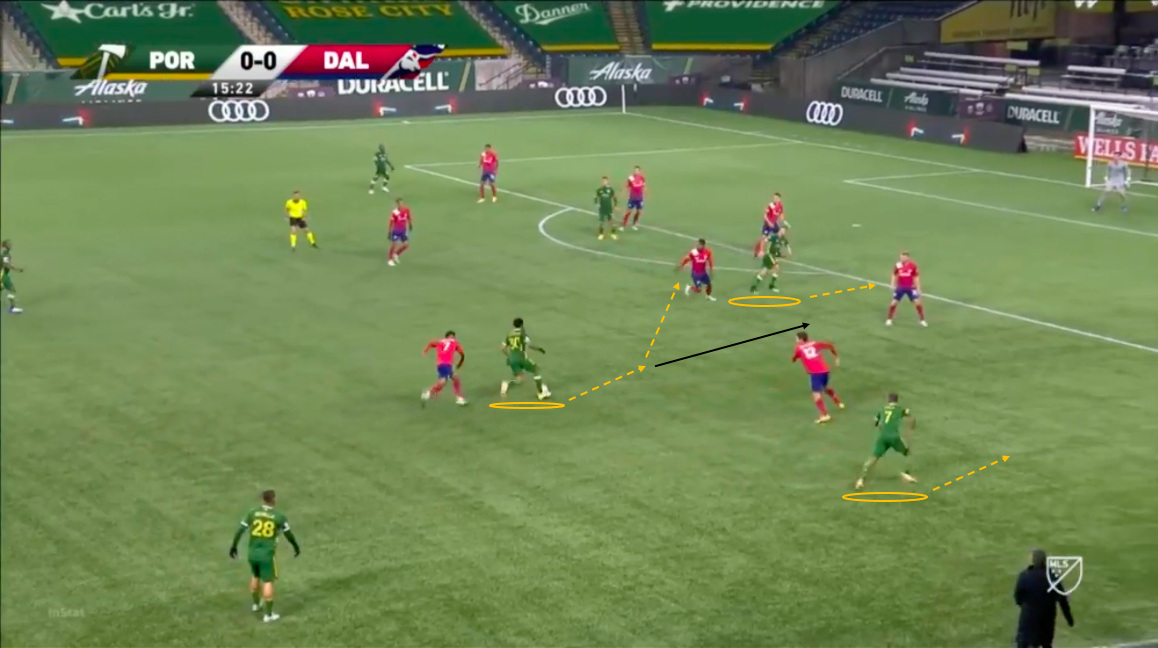 Williamson is dribbling towards the defenders to draw them towards him. This pulls Santos away from Valeri, who makes a run between the two defenders. Meanwhile, Polo takes off down the flank, and due to his defender going towards Williamson. After playing Valeri into the penalty area, Williamson continues his run. The combination of Valeri’s movement and Polo receiving a pass draws the defenders’ attention away from Williamson. The midfielder receives a pass from Polo but is immediately swarmed by defenders after a poor touch.

Analyzing their goal, we see how the full-backs joined in. In a way similar to Borussia Dortmund, the full-backs would occupy the halfspace while the wingers stayed wide. Occupying the halfspace is left back Villafaña, while the eldest Chara is out wide. We can also see that while he is pausing to assess his options, Valeri runs behind the defenders to create a passing option. 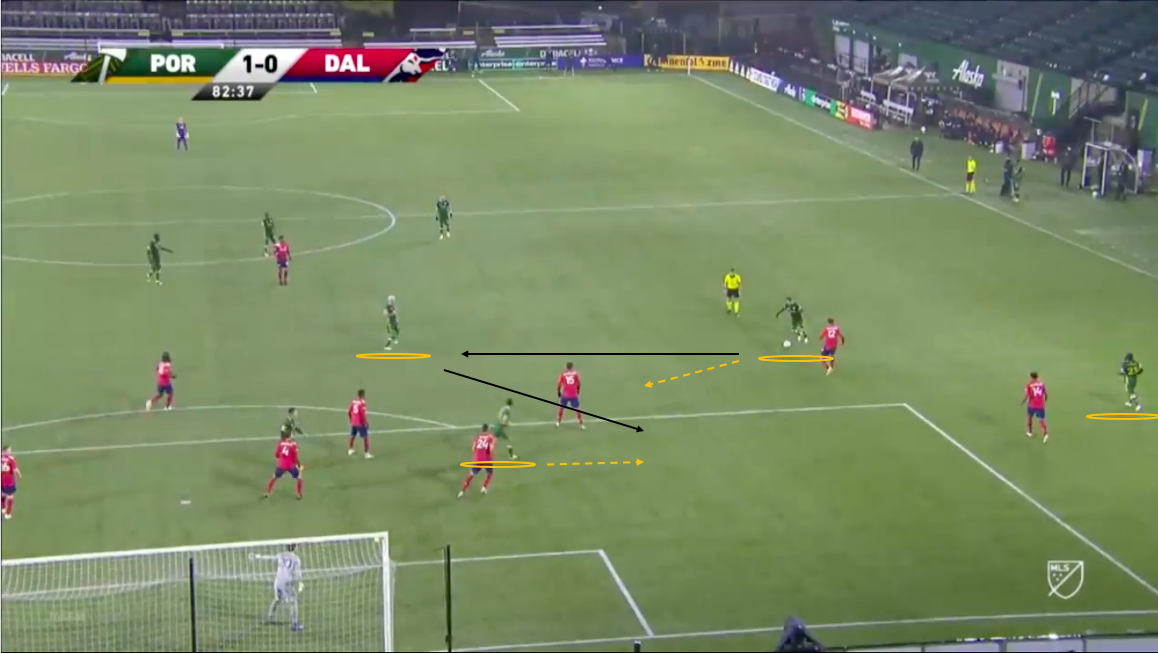 After passing to Paredes, Villafaña made his way into the penalty box. He continues his run after Valeri receives from Paredes, the ball and his pause draw defenders towards him. This allows Villafaña to split the defenders with his run, receiving Valeri’s clever pass inside the six-yard box. Since Nelson started at left-back, Dallas essentially operated with three defenders in their build-up. The use of Ricaurte and Santos as the double pivot allowed right back Reynolds to push even higher up the field. 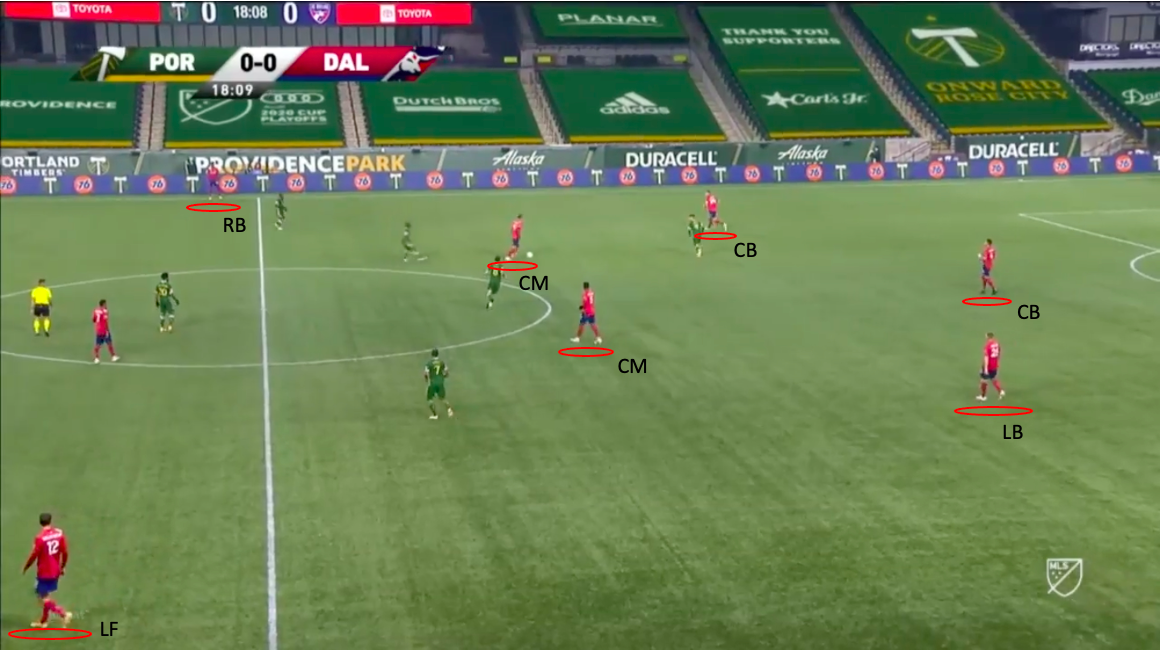 Above we see Hollingshead positioned in his usual spot on the flank, while Reynolds is on the opposite touchline offering width. Nelson is tucked in alongside Hedges and Bressan. The double-pivot of Santos and Ricaurte continually move off the ball to create passing options. 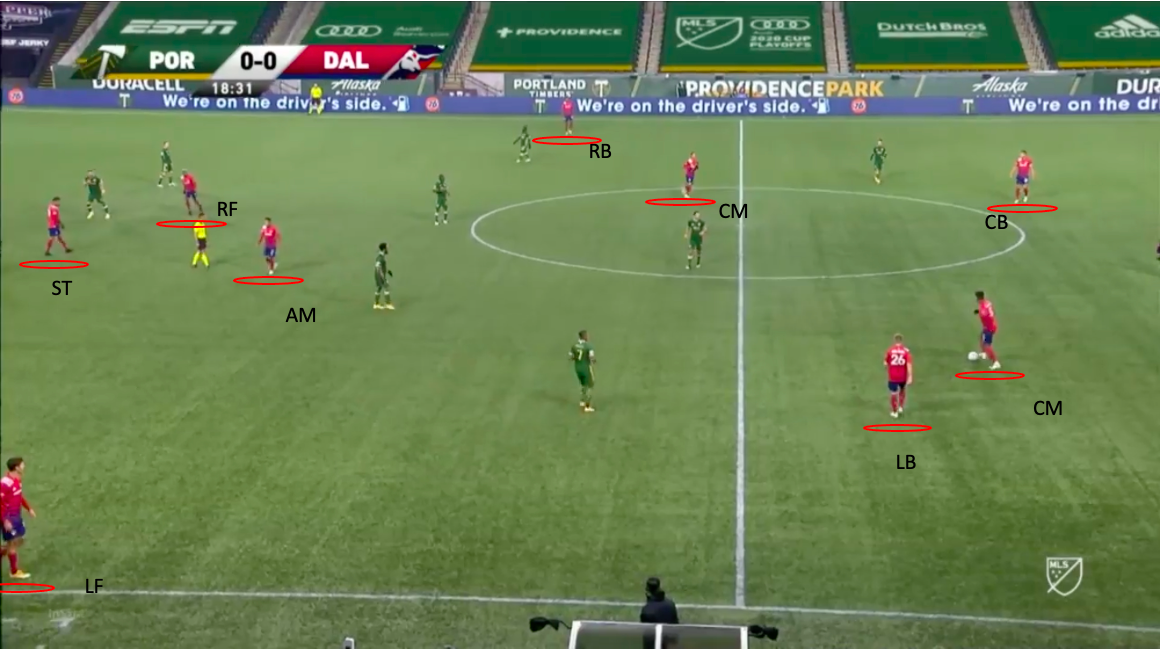 During the same sequence, we see how the forwards positioned themselves—this isolated Reynolds and Hollingshead with either a fullback or a defending winger. We can also see that Ferreira is positioned behind Portland’s double pivot, creating a decision on whether to mark the space or let the Dallas player roam free.

Their main goal with this tactic was to create 2 v 1 situations in the wide areas, crossing the ball into runners arriving into the penalty area. As Dallas looked to equalize, this tactic went into overdrive. 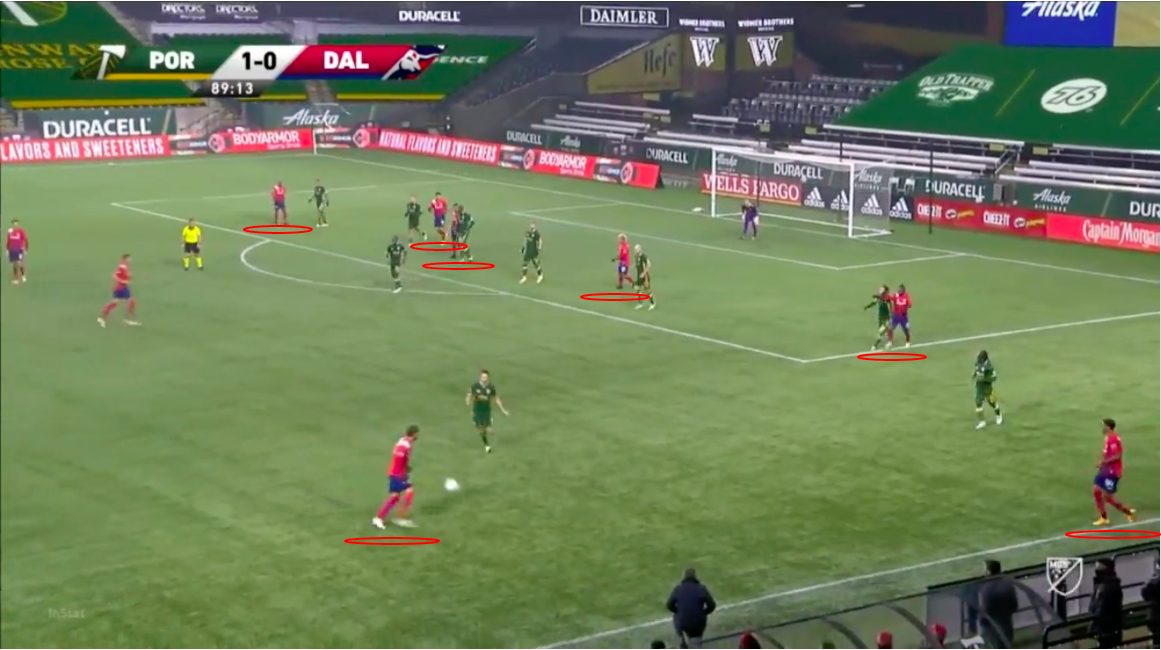 While Tessmann is in possession, we see above that six Dallas players have made their way forwards. In case they lost the ball, they would then heavily counter-press and attack Portland while they were disorganized.

The Timbers press looked to bait the visitors into thinking they were able to play out from the back. In the first half, they were able to force Dallas into multiple mistakes within their defensive third. Portland made 21 recoveries throughout regulation in the Dallas defensive half. 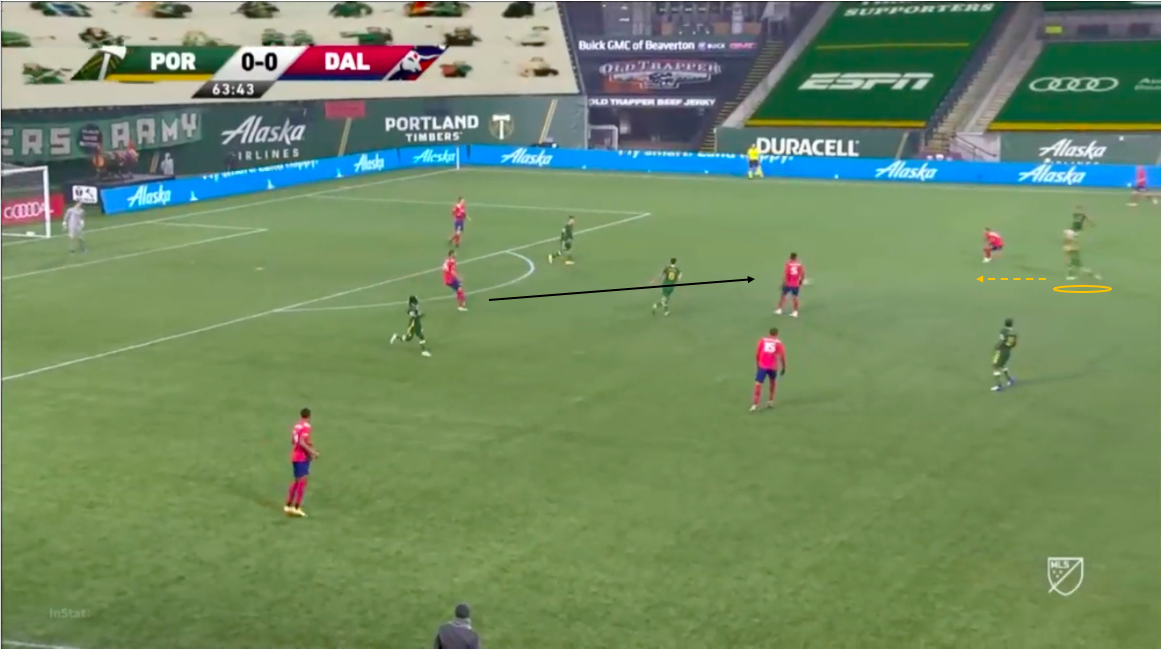 Looking at this example from the second half, we see how Portland was able to create a chance with this tactic. Hedges passes towards Ricaurte, who is immediately under pressure from Paredes. Prior to the pressure, it seemed as though the midfielder would be able to turn freely. Paredes casually shrugs off the challenge and attacks the space in front of him. Given such time and space, the midfielder takes a free shot at goal which Maurer forces out of bounds. Using this tactic, Portland was able to win the ball in the middle third and catch Dallas in transition.

Although the Portland Timbers did their absolute best offensively, the attacking changes made by FC Dallas were ultimately rewarded. While this does raise questions as to why Luchi Gonzalez set his team out for a measured first half, the result shows that Dallas has an incredibly potent strike force when given full freedom. Up next for the Frisco club is either LAFC or a rematch with the Sounders.

Portland’s attack nearly picked apart Dallas’ defensive block, although Savarese and the Timbers will rue the defensive miscue that allowed Dallas back in the game. The early injury to Williamson changed their look in the midfield, and missing an attacker with Premier League experience such as Sebastian Blanco was detrimental as well.