The enthralling fixture lived up to its pre-game hype. FC Goa and Bengaluru FC are one of the most successful clubs in the Indian Super League and the two clubs came head to head in the Fatorda Stadium on Sunday night.

The new-looking FC Goa side struggled to build-up in the first half. Juan Ferrando made few substitutions in the second half to bring back the Gaurs to life. Bengaluru FC had many familiar faces and Carles Cuadrat looked to have a set plan of sitting back and counter the Gaurs.

In this tactical analysis, we will discuss the tactics of both the managers. This analysis will also delve into why FC Goa struggled to build-up in the first half and what changed in the second half. 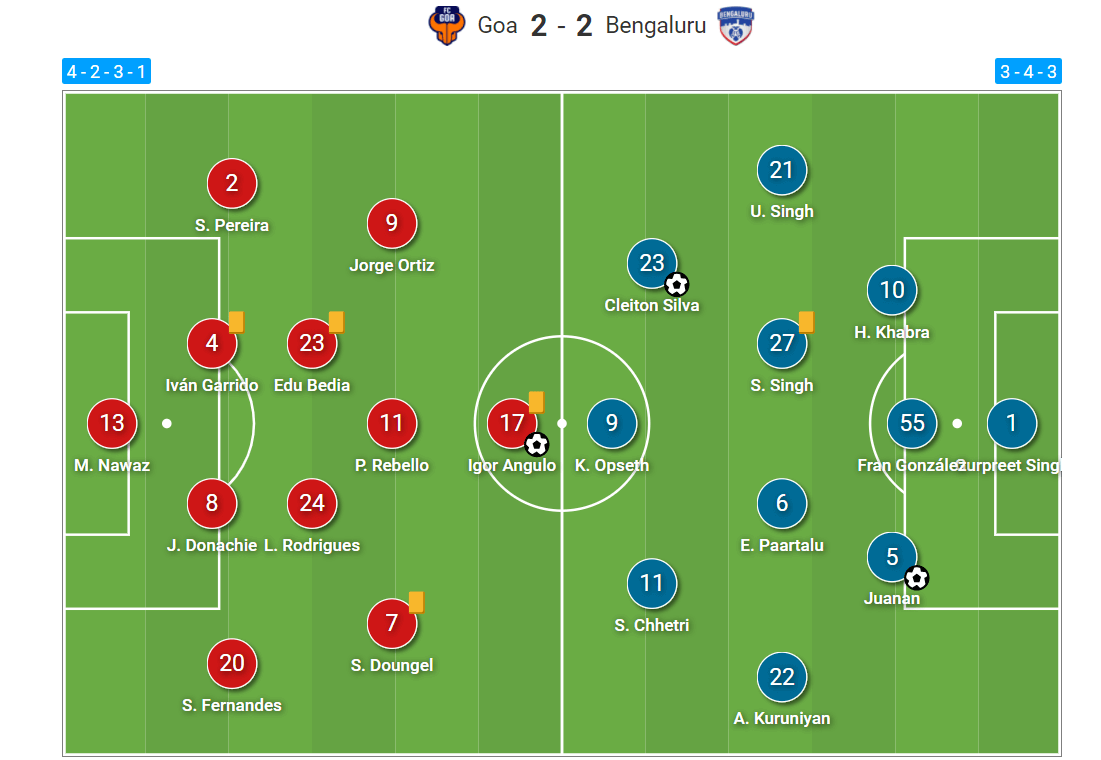 Carles Cuadrat started with a 3-4-3 formation on paper. However, out of position, he instructed his players to play in a hybrid of 4-5-1 and 5-4-1. The regular Gurpreet Singh Sandhu started in between the sticks. He was protected by Udanta Singh, Harmanjot Khabra, Fran González, Juanan, and Ashique Kuruniyan in defense. Suresh Singh Wangjam and Erik Paartalu, former Brisbane Roar player, manned the midfield. Sunil Chhetri, Cleiton Silva, and Kristian Opseth led the attack.

FC Goa pressed in a 4-2-3-1 or 4-1-4-1 midblock depending upon the dynamics of the game with Rebello marking or cover shadowing the ball-near pivot, Angulo covering Bengaluru’s backline, Edu Bedia marking the ball-far pivot, and Lenny sealing the press by sitting a bit deeper than his midfield compatriot to reduce the distance between the second line of defence and the last line of defence. 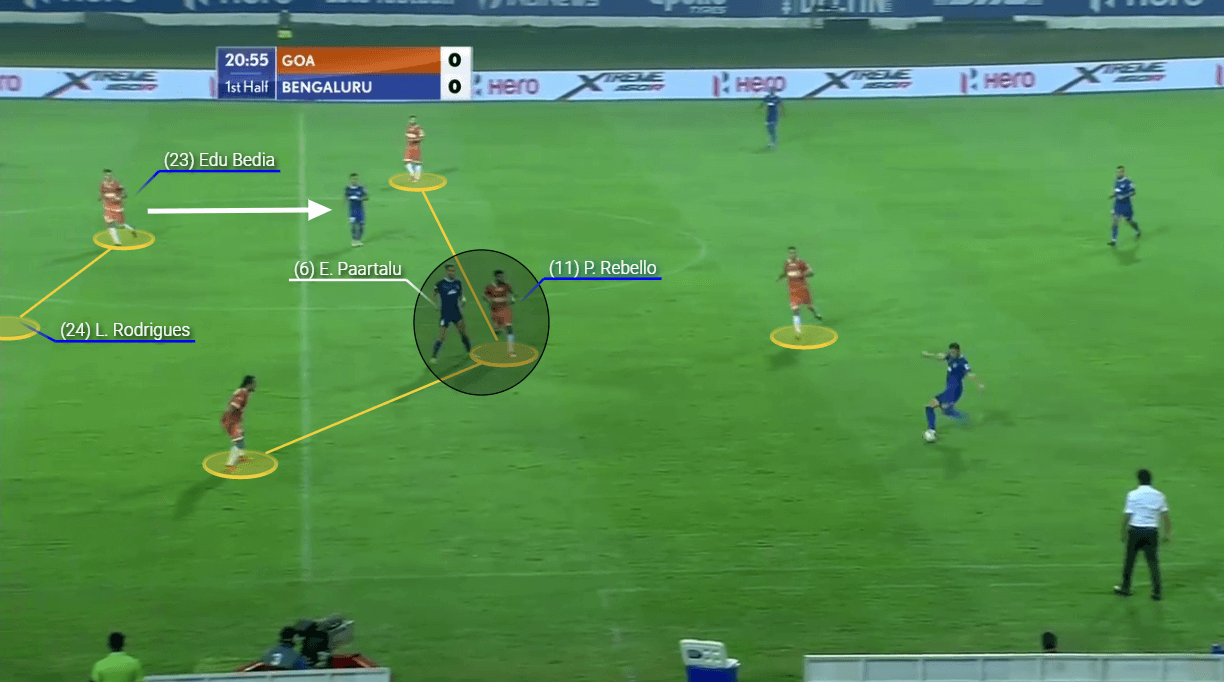 Bengaluru generally went for long balls from the goalkeeper, however, on some occasions, the Blues did build-up from the back with short passes. Bengaluru, generally, played with a three-man backline, in possession. The catch is that, majorly, it’s not Khabra, Fran, and Juanan, who forms the backline rather Paartalu drops deep to the backline, and Khabra is pushed higher on the flank along with Udanta. 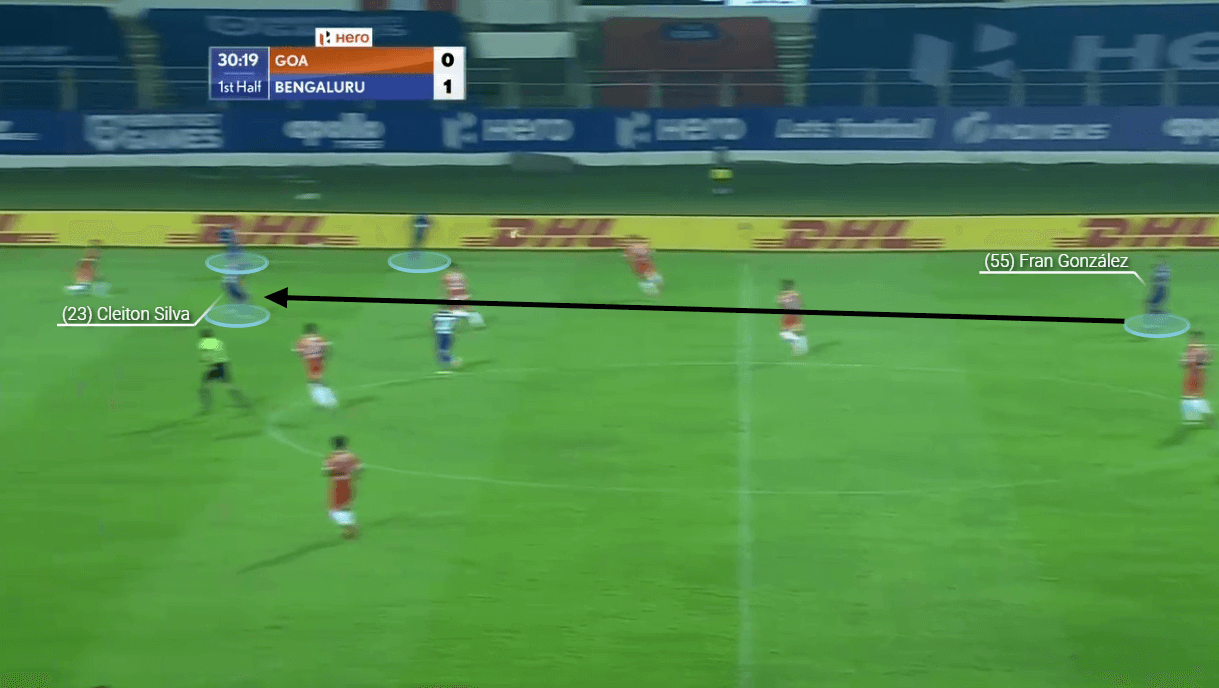 The main idea of Cuadrat was to access the halfspace and overload the right flank. Since Angulo had to cover all the three players in the backline, it was impossible for him to cover all the three players and thus Fran-Silva combination in the halfspace was a common method of build-up for Bengaluru. As you can see, in the above image, Bedia tries to cover shadow Silva, only to be unsuccessful and the left-back, Pereira now has three Bengaluru players to deal with. The problem with the press is that Oritz tries to maintain his position and cover shadow Khabra even when Khabra is far from him. So, even if Silva was cover shadowed, Fran could have found Khabra with a lofted ball and progress the build-up.

The problem with Bengaluru’s build-up was that either Fran’s pass was poor (in this case) or Silva’s first touch wasn’t good enough to progress the ball quickly and Goa players quickly converged onto them. The other conundrum was that Udanta and Khabra couldn’t space themselves properly or rotate intelligently to take advantage of the superiority.

It was a story of both the flanks. On the left, Oritz was too static and on the right, Doungel positioned too narrow occasionally, closer to the left centre-back and trying to cover shadow the wing-back of Bengaluru. The pressing structure of Goa looked very poor, on most occasions, out of possession. 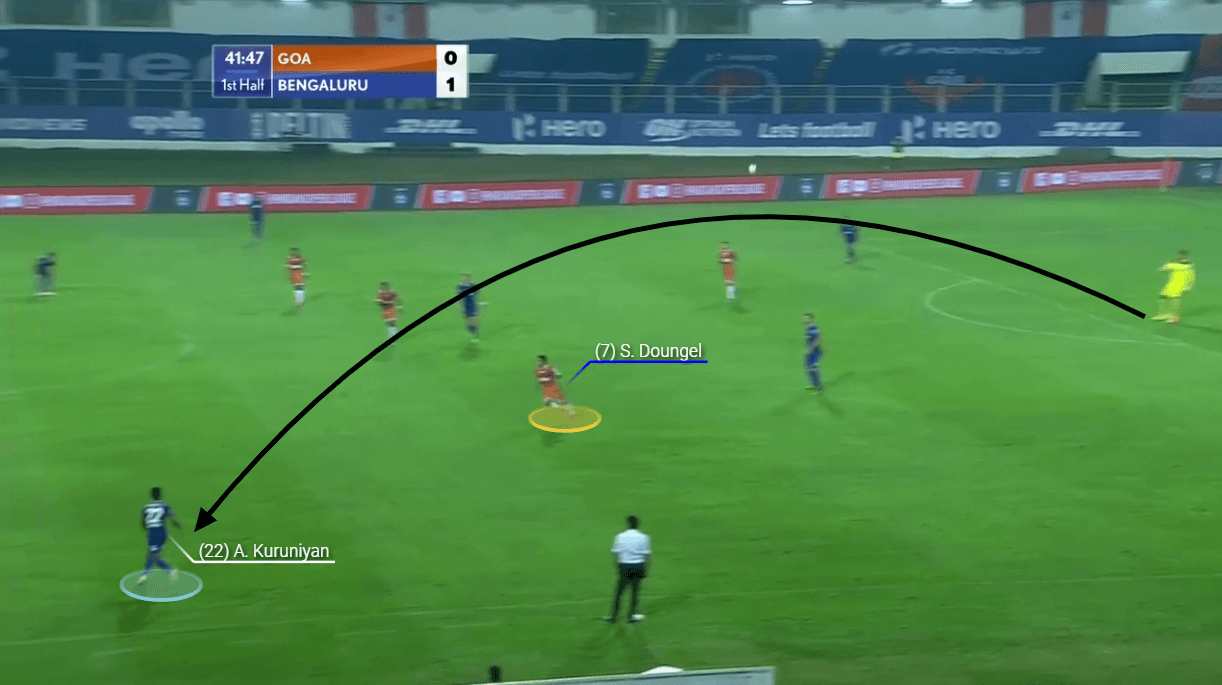 As can be seen in the above image, Doungel is too close to Juanan and leaving Kuruniyan completely unmarked in the process which helps Bengaluru to overload the left-flank. Gurpreet, even though not known for his passing prowess could easily find Ashique, in this case. 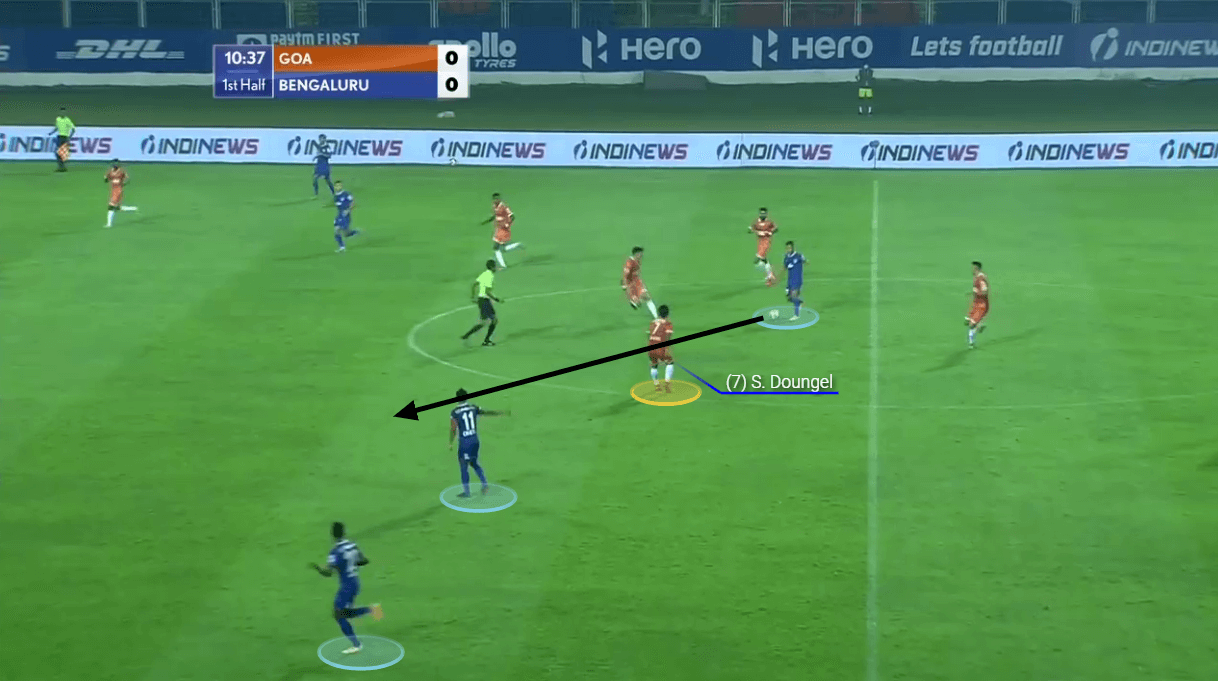 The above image is another case where Doungel is too narrow, leaving Chhetri and Kuruniyan both unmarked. Wangjam finds Chhetri and Bengaluru earns a corner in the process (from which the Blues are very dangerous). Even if Goa’s defensive unit were asked to move with respect to the ball, Doungel’s positioning and awareness were too poor. It led to him tracking Kuruniyan late on most occasions and thus conceding fouls.

Cuadrat’s out of possession structure indicated he was willing to sit back and counter Goa when given the chance which we will discuss in the later sections.

Bengaluru pressed in a 4-5-1 hybrid (will touch upon later) mid to low block in the starting minutes and switched to a low block after going 1-0 up. The method of the press was man-oriented zonal marking where the engagement line was the middle third of their own half. In man-oriented zonal marking, the reference point is the opponent even when the team is set up in a zonal structure. The players have their own zones/spaces to cover but also marks the opponent in their zones. They remain close to their opponents, thus reducing the access distance which helps them to press or cover shadow their respective opponents effectively. 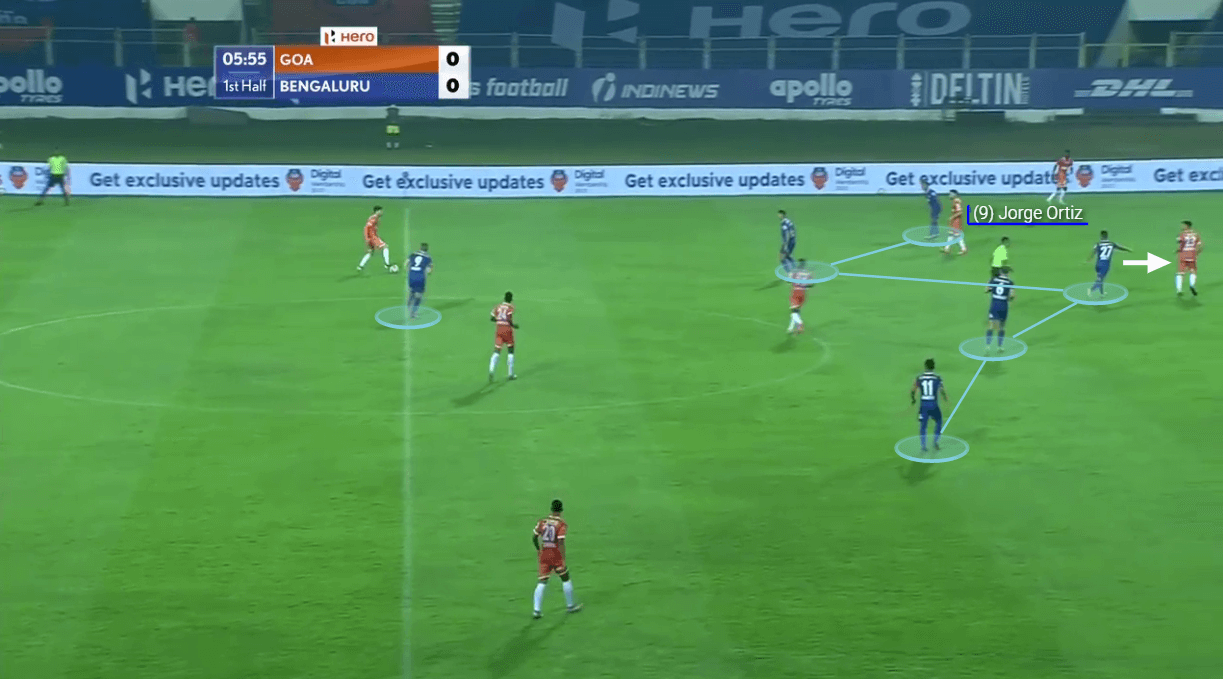 Here, as you can see, Wangjam marking Edu Bedia closely in his zone. Silva is ready to engage with his direct opponent (Garrido) when he was entering Bengaluru’s half. Opseth covered Goa’s backline.

Udanta’s positioning was a curious aspect. Most of the time, he was neither with the last line of defence nor in the second line of defence. He positioned himself in the halfspace between both the lines. It was due to two reasons. One – he tried to protect the halfspace in between the lines where Oritz frequently positioned himself. Two –  Cuadrat’s willingness to counter attack through Udanta on the right flank, which was mostly unsuccessful with Udanta but once Kuruniyan was switched to the right flank, the counter-attack worked.

Goa took advantage of Bengaluru striker covering the entire backline. Even when Goa had superiority in the first phase of build-up, Ferrando opted for a midfielder (mostly Bedia) to drop and create a three-man backline and even the ball-far full-back stayed behind, most of the times. Edu Bedia and Lenny were in sync and rotated between them.

The main idea was to release one of the centre-backs with a lot of space. 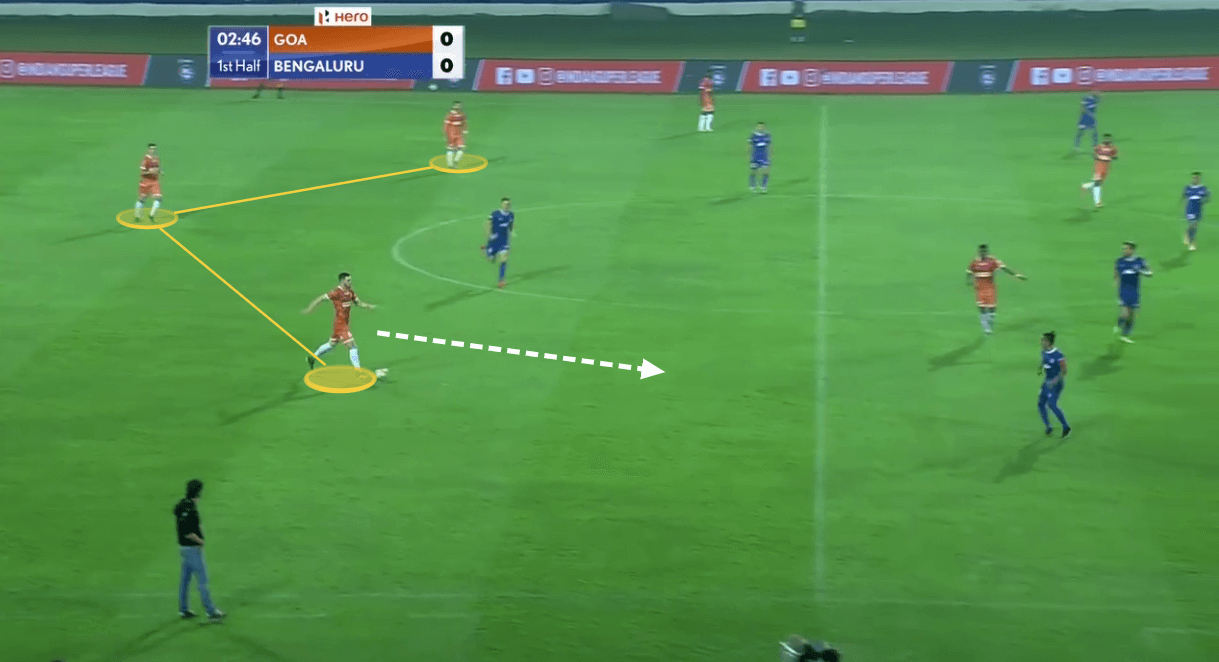 When one of the centre-backs would move up, the winger on that flank would invert to the half-space and the full-back would provide the width. 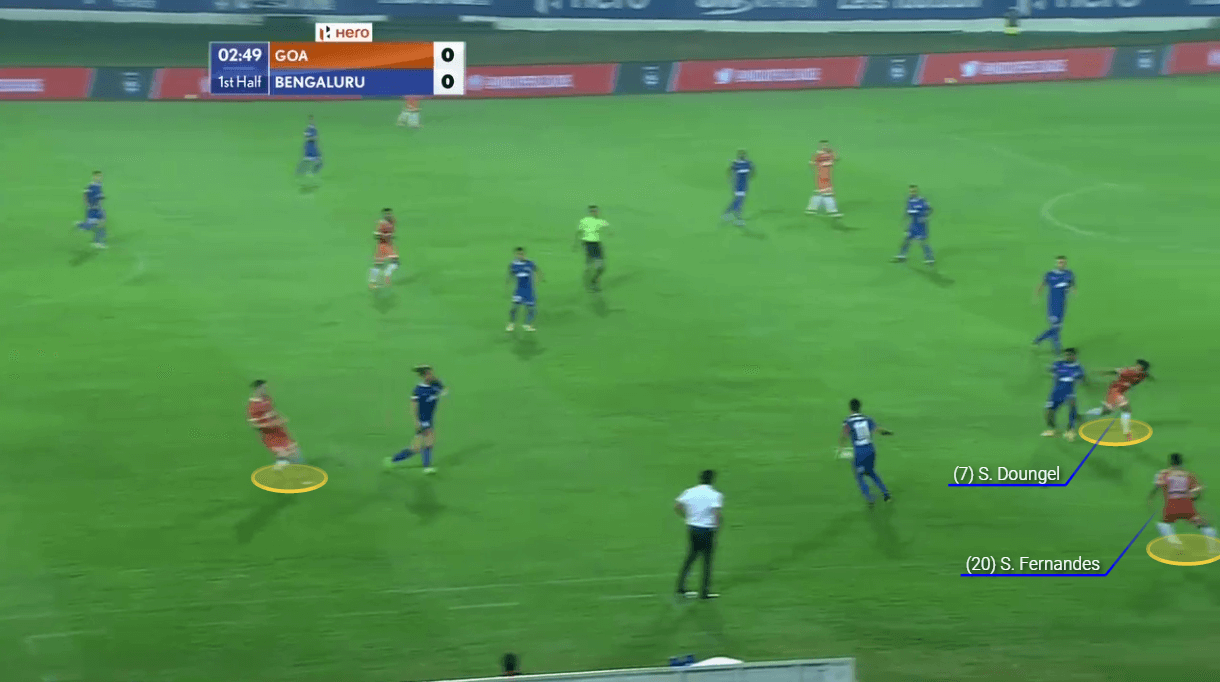 This build-up method did not work at all as the movement of the wingers, and the full-backs were too static and also Goa looked to create huge numerical superiority in their own half against a low block which completely made their attack passive.

Goa’s inefficiency in exploiting the left-flank

The peculiarity of Udanta’s positioning could have left Bengaluru struggling if not for Oritz and Pereira’s lack of movement and also Bengaluru’s brilliant awareness. 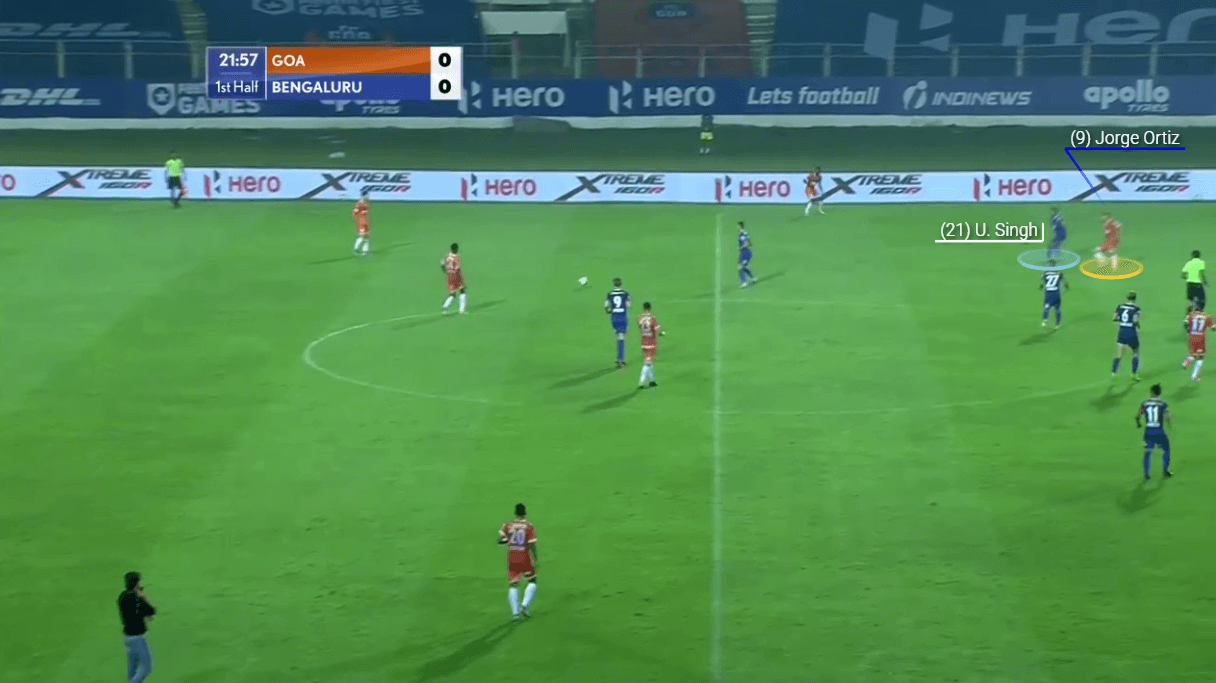 Here, Oritz tries to drop to Bengaluru’s second line of defence and create a passing lane for Lenny but found himself in a zone covered by Udanta. Lenny passed the ball to Pereira wide on the flank. As soon as that happened, Udanta shifted his focus from Oritz to Pereira and covered him and Silva dropped a bit to take care of Oritz. Note, that Udanta did not move to the flanks to press the left-back aggressively, rather marked the left-back passively with a close access as well as cover-shadowed Oritz. This is the advantage of man-oriented zonal marking.

Bengaluru’s structure could have been exploited by the left-winger pinning Khabra initially and then dropping deeper which could have attracted Khabra to the left-winger and thus leaving Pereira marauding on the left-flank completely unmarked, since Udanta’s primary duty was to protect the half space where the left-winger of Goa would position himself. 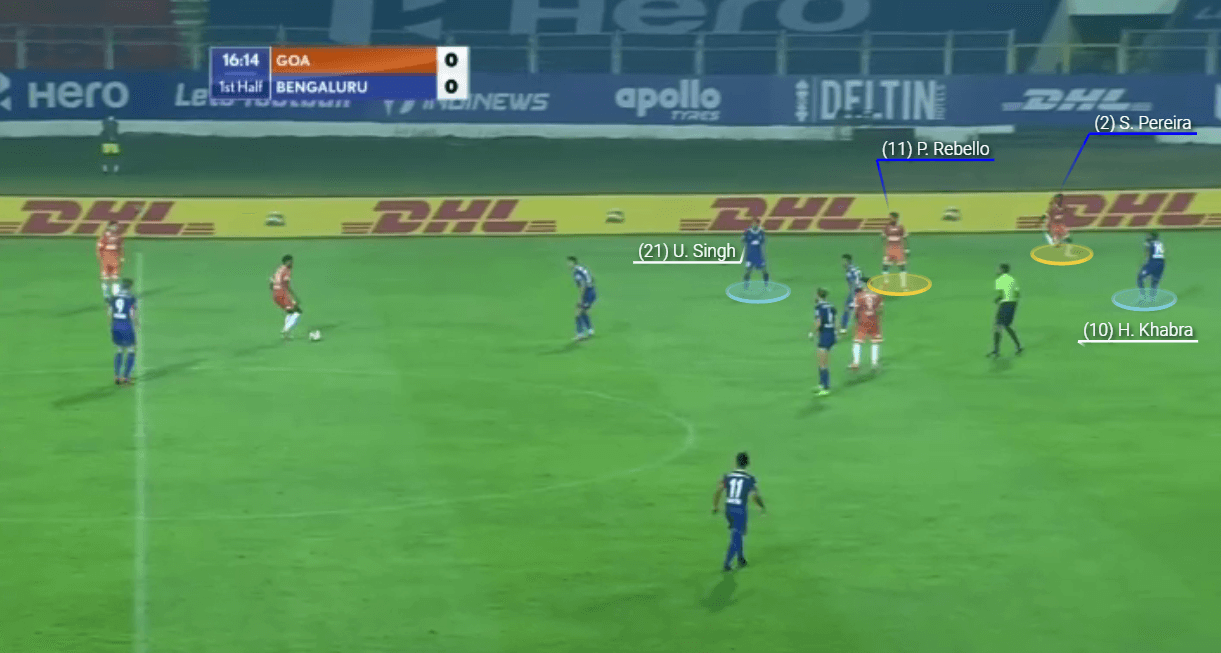 Here, Rebello switched with Oritz and Rebello occupied the left half space in between the lines but his movement was too static to drag Khabra out of his line. So, even when Pereira made the run, Lenny could not play a long ball to him as Khabra could have easily intercepted the ball.

The other method by which Goa could have exploited the left flank was by circulating the ball in the other half and then switching the ball to the left flank where Pereira and Oritz would have created an overload on Khabra again due to the peculiar positioning of Udanta. 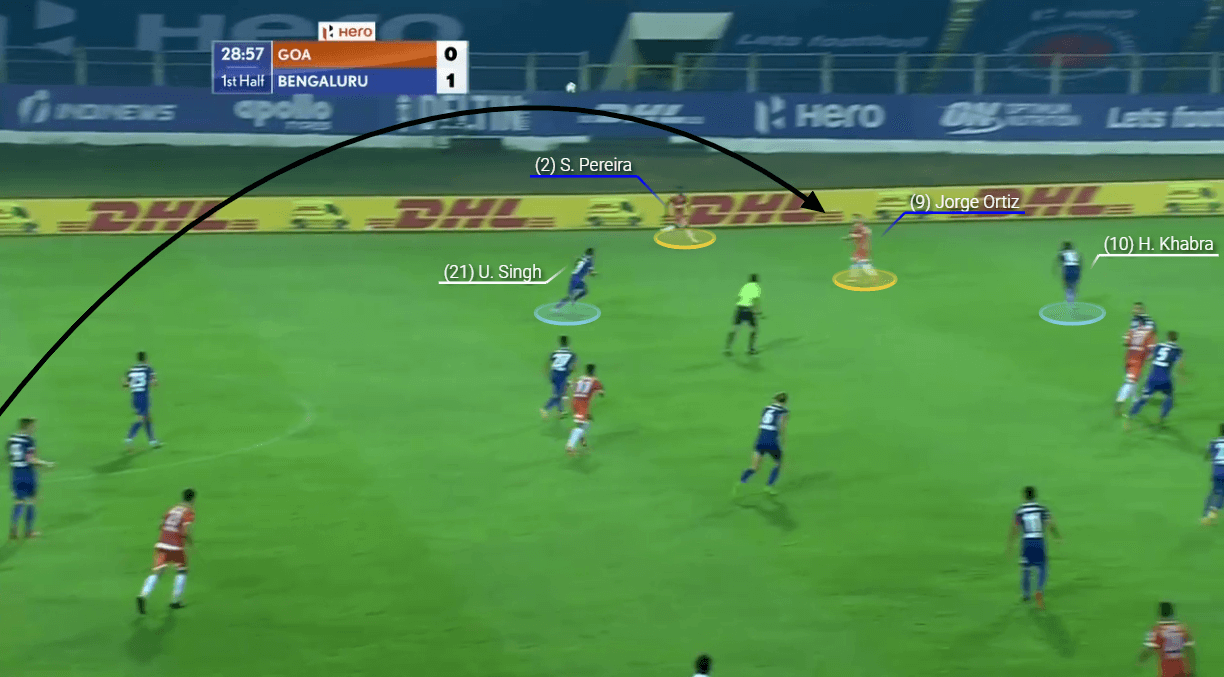 However, due to poor weight on the ball, either the ball would be intercepted or Udanta would eventually fall back to help Khabra. 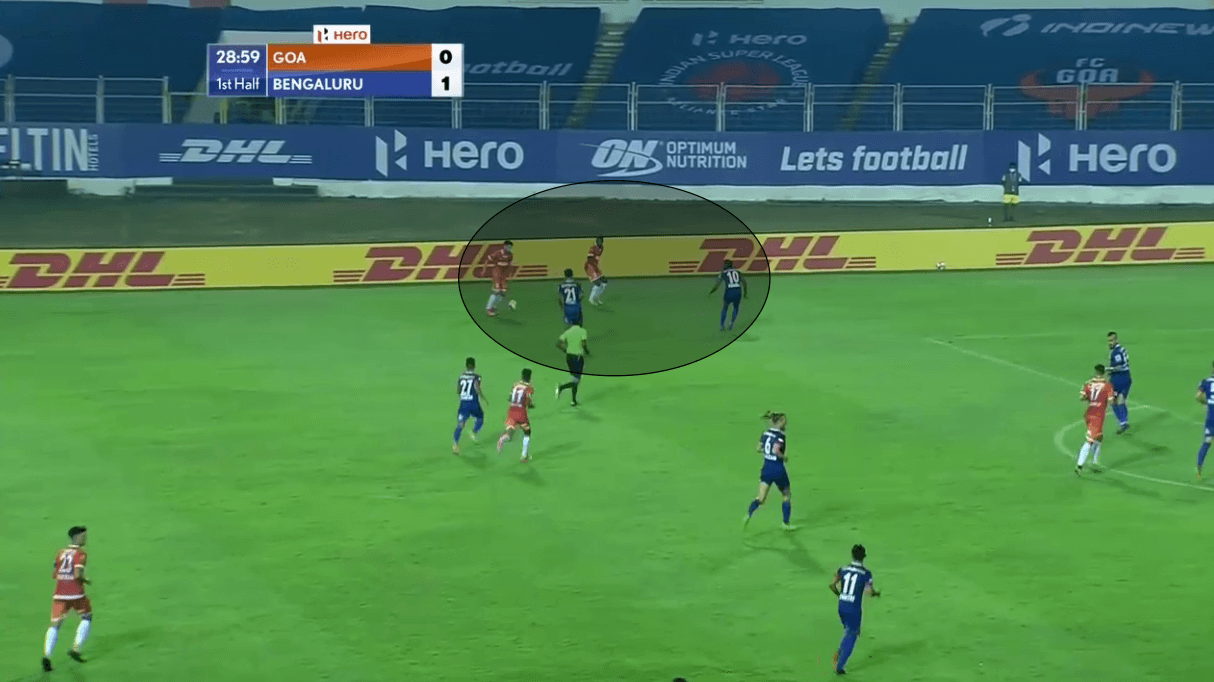 Goa tried few methods to exploit Bengaluru’s left flank but the static movement and poor creativity of the players let the Gaurs down.

The other poor aspect of Goa’s positioning play was the positioning of the attacking midfielder (could be seen in all the pictures above), instead of occupying the space in between the lines he was horizontally parallel with the second line of defence or deeper. And on a very few occasions when the attacking midfielder was in between the lines, he would be easily cover shadowed by Bengaluru’s second line of defence owing to his static movement.

Juan Ferrando’s changes in the second half

Juan Ferrando’s changes in the second half brought the Gaurs back to life. Alberto Noguera and Brandon Fernandes’ introduction changed the complexion of the game. Brandon and Noguera rotated beautifully and Noguera’s movement was tremendous in the final third. Even Oritz and Pereira’s movement on the left flank improved with their introduction. 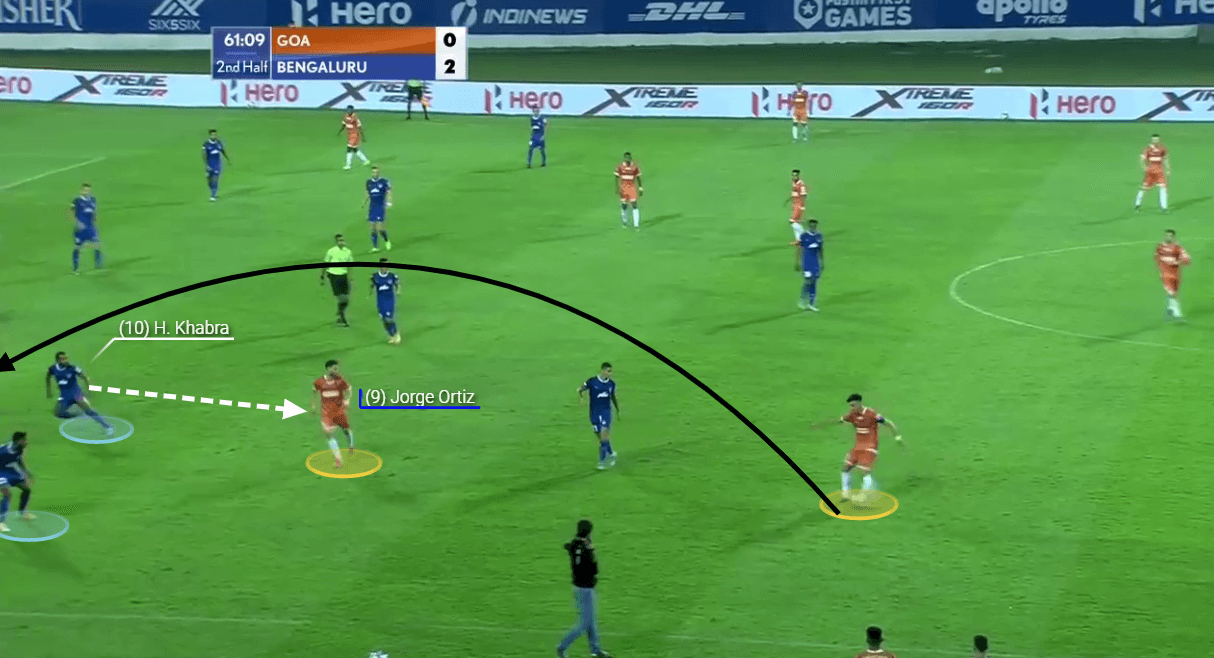 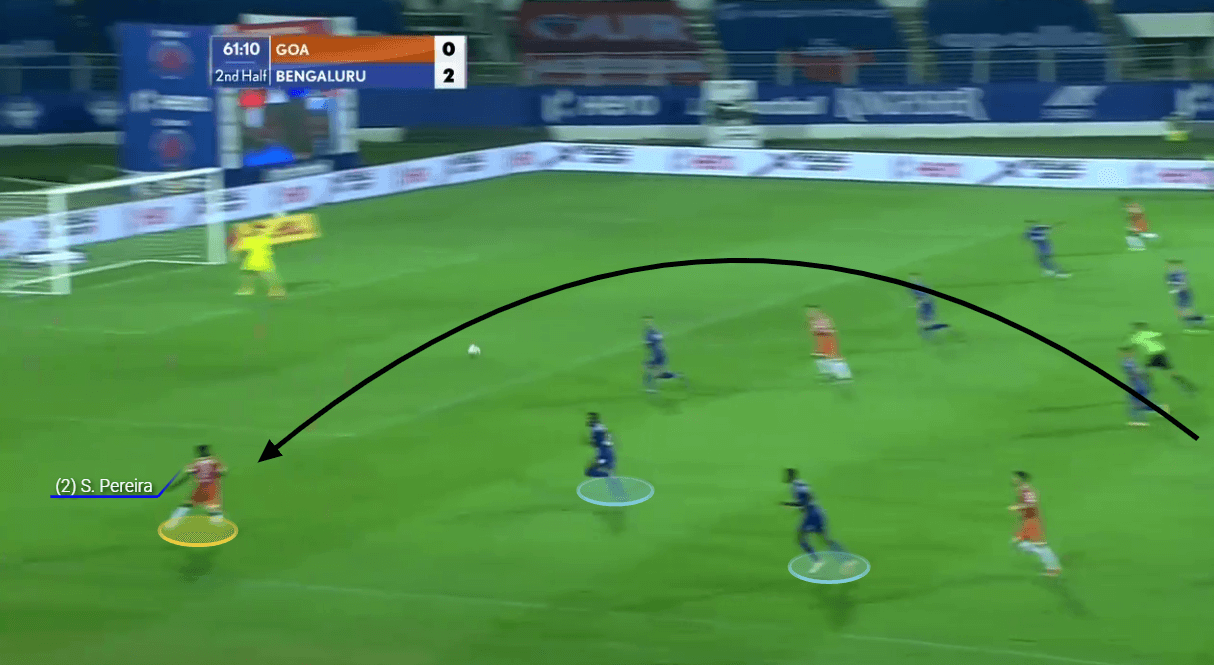 As you can see in the above images, finally, Oritz’s movement and positioning dragged away Khabra from his position and due to Bengaluru RWB’s (Kuruniyan, in this case) peculiar positioning, Bedia could finally find the marauding Pereira.

Finally, a good movement by the pair on the left flank made Cuadrat tweak his tactics a bit. Now, Kuruniyan was asked to position himself with respect to Goa’s left-back. 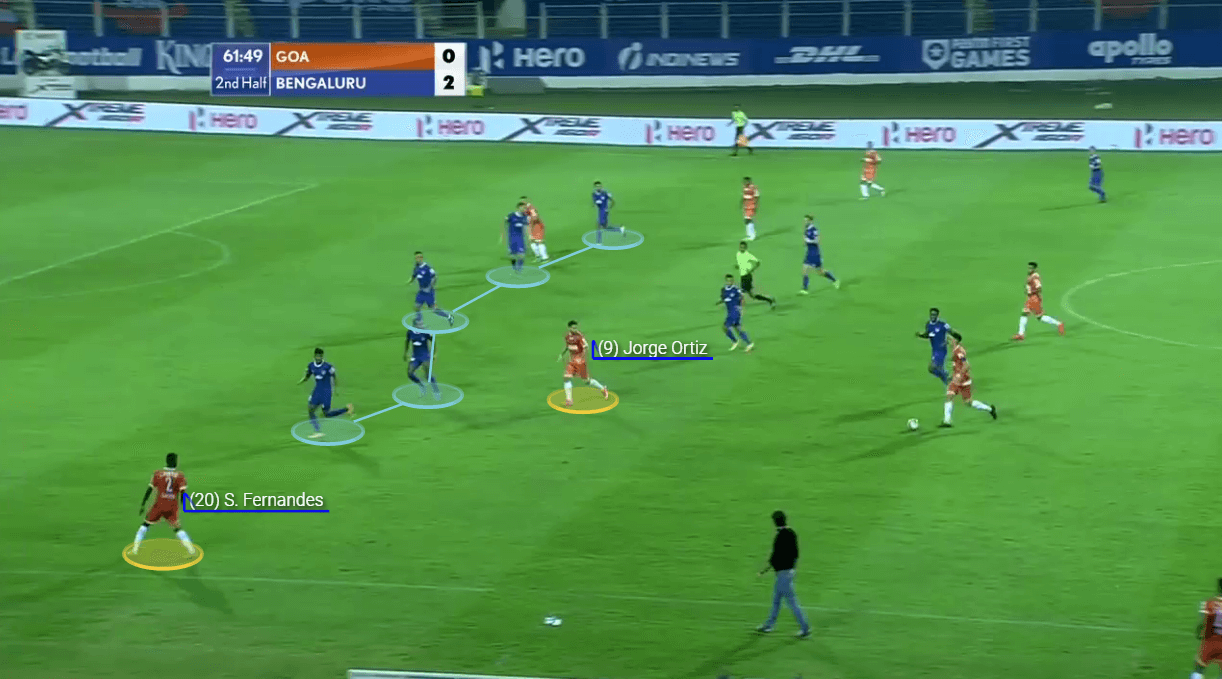 As can be seen, Kuruniyan now forms a more traditional looking five-man backline.

The other change was Ferrando finding it necessary to have bodies in between the lines to affect the game. 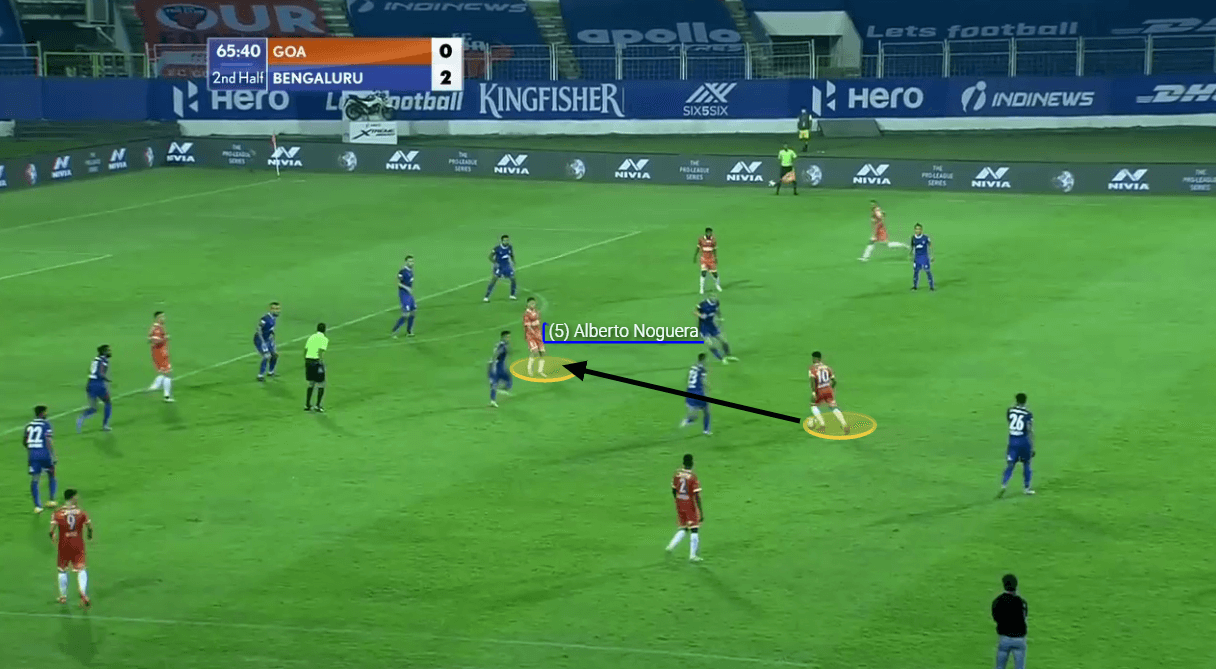 Here, Noguera is in between the lines, and also his movement takes him away from Wangjam’s cover shadow. Brandon plays a pass to the Spaniard. Noguera’s first touch was exquisite and he finally found Angulo’s run between Fran and Khabra which the former Athletic Bilbao striker did throughout the match.

In the screenshot above, even Romario Jesuraj could be seen in between the lines and Seriton tried to overlap the Chennai star to overload the other flank which was non-existent in the first half.

FC Goa looked to exploit Bengaluru’s right flank throughout the game. Udanta’s unusual positioning could have been exploited but Goa have themselves to blame. However, in the second half, the introduction of Alberto Noguera, Brandon Fernandes, and Romario Jesuraj brought the Gaurs back to life. The static movement of the players became more dynamic and the Gaurs also used few bodies in between the lines which eventually changes the dynamics of the game.

FC Goa also have to improve their pressing structure. Bengaluru could have taken advantage of Goa’s poor pressing but a short preseason might not have helped them to be in their groove from day one. It would be interesting to see if Cuadrat continues with this hybrid 4-5-1 system or tweaks it from the next game.