NorthEast United pulled out a shock victory against Sergio Lobera’s Mumbai City FC in their opening game. Kerala Blasters had no such luck, the Tuskers lost to the newly formed ATK Mohun Bagan in the Indian Super league 2020/21 opener, even though they dominated the outing with more possession.

Kibu Vicuña had a daunting task ahead of them as they faced the energetic and exuberant men of Gerard Nus. The Yellow Army started the game with a bang and went ahead 2-0 in the first half but Nus’s men had a different plan.

In this tactical analysis, we will discuss the tactics and intricacies of both the managers.

Kibu Vicuña started with his preferred 4-2-3-1 formation but made numerous changes to the line-up. Nishu Kumar was back in the starting line-up after he completely recovered from his injury. The other three changes were  Rohit Kumar, Seityasen Singh, and Lalthathanga Khawlhring. 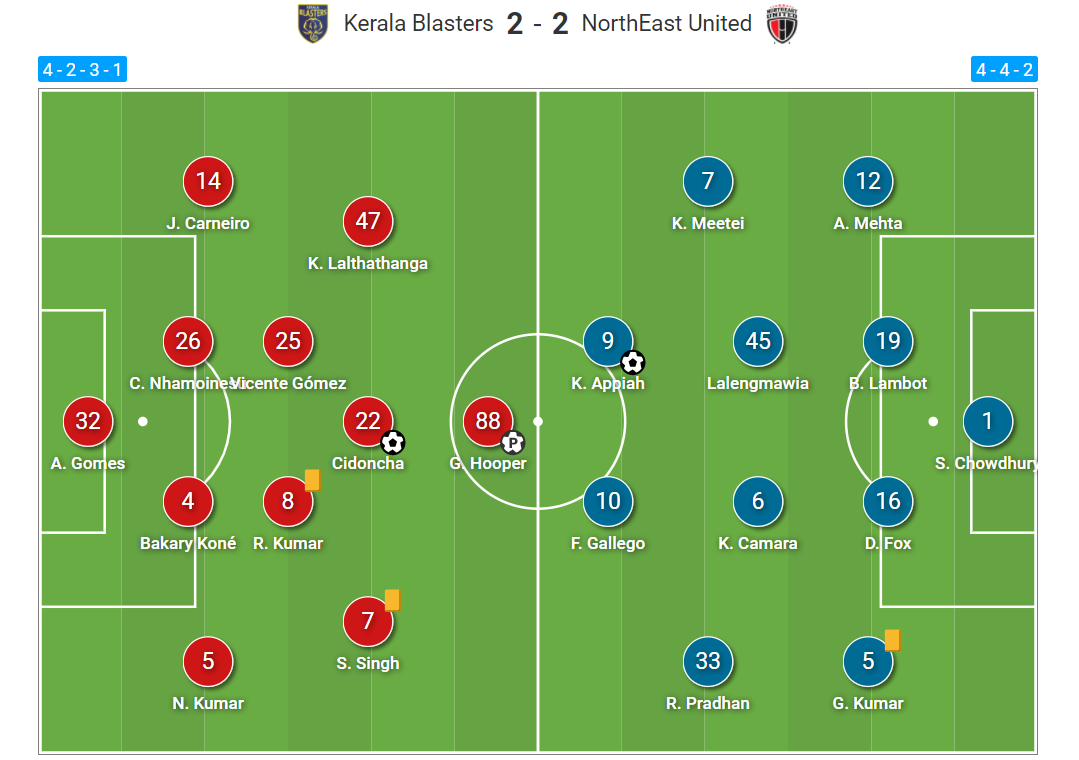 Gerard Nus stuck with his 4-4-2 that gave him the victory against the former Barcelona youth coach. He made two changes to the lineup with Rakesh Pradhan and Federico Gallego replacing Luís Machado and Fanai Lalrempuia.

Kibu Vicuña’s men pressed NorthEast high with a 4-4-2 man oriented zonal-marking. In this method of marking, the opponent player and space around him is primary. The players stay in a zonal structure but mark the player around his space. 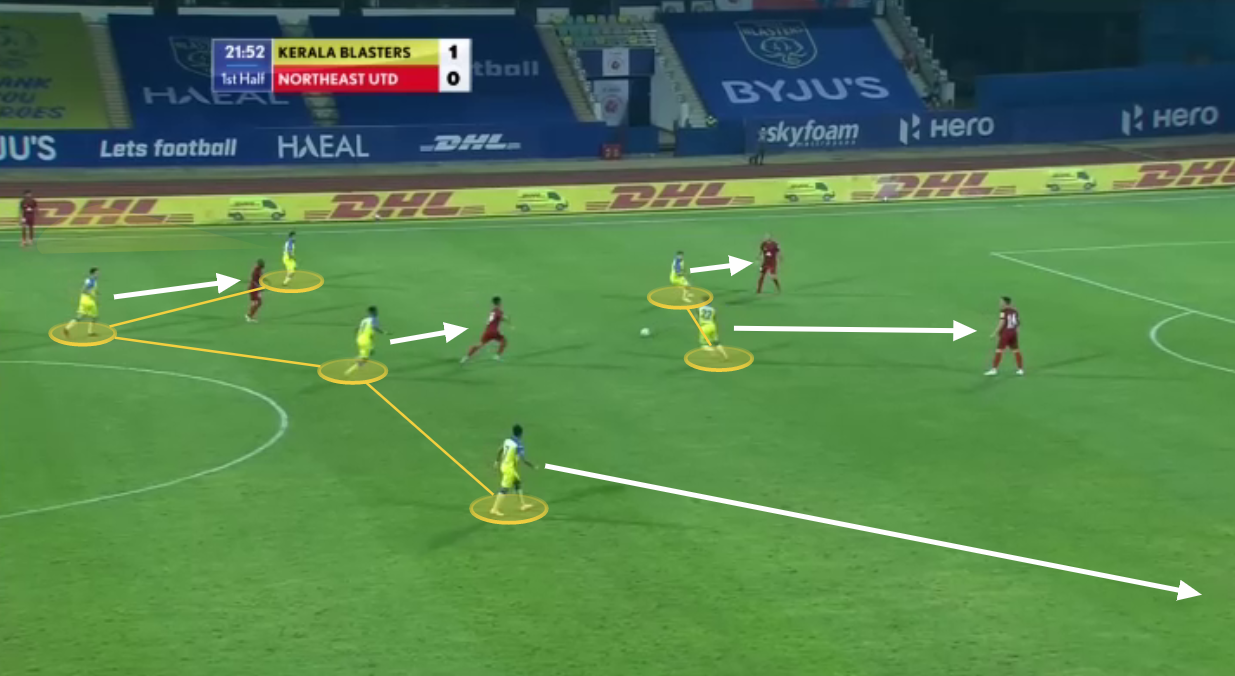 The above image might look like a man-marking but it’s a man-oriented zonal marking where each player marked his respective opposition around his space. Sergio Cidoncha moved up to form a two-man first line of press along with Gary Hooper. The duo pressed the opposition centre-backs keeping the double pivot in their cover shadow. Lalthathanga, Rohit, Vicente Gómez, and Setyasen Singh marked the opposition right-back, double pivot, and the left-back around their space. Lalthathanga was mostly cover shadowing the opposition right-back as he was instructed to move up more than his compatriot on the other half.

On certain occasions, when Gómez or Rohit would position deeper due to NorthEast’s build-up structure, the front two would go for pendulum press. In this kind of press, one forward moves up to press the ball-carrier centre-back and the other stays near the pivot who is not marked. 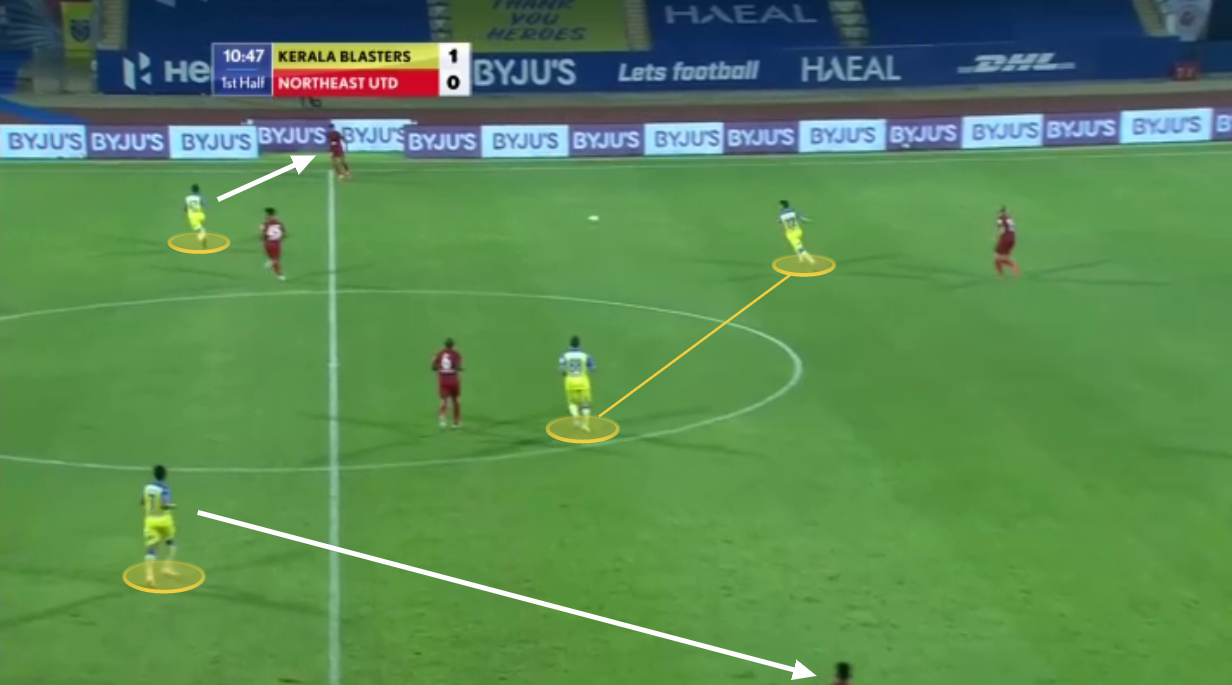 As you can see in the above image, Hooper sticks to Khassa Camara and Cidoncha moved up to press Benjamin Lambot who was the ball-carrier.

The conundrum was when Blasters transitioned from pendulum press to the 4-4-2 press and the midfielder stayed deeper. 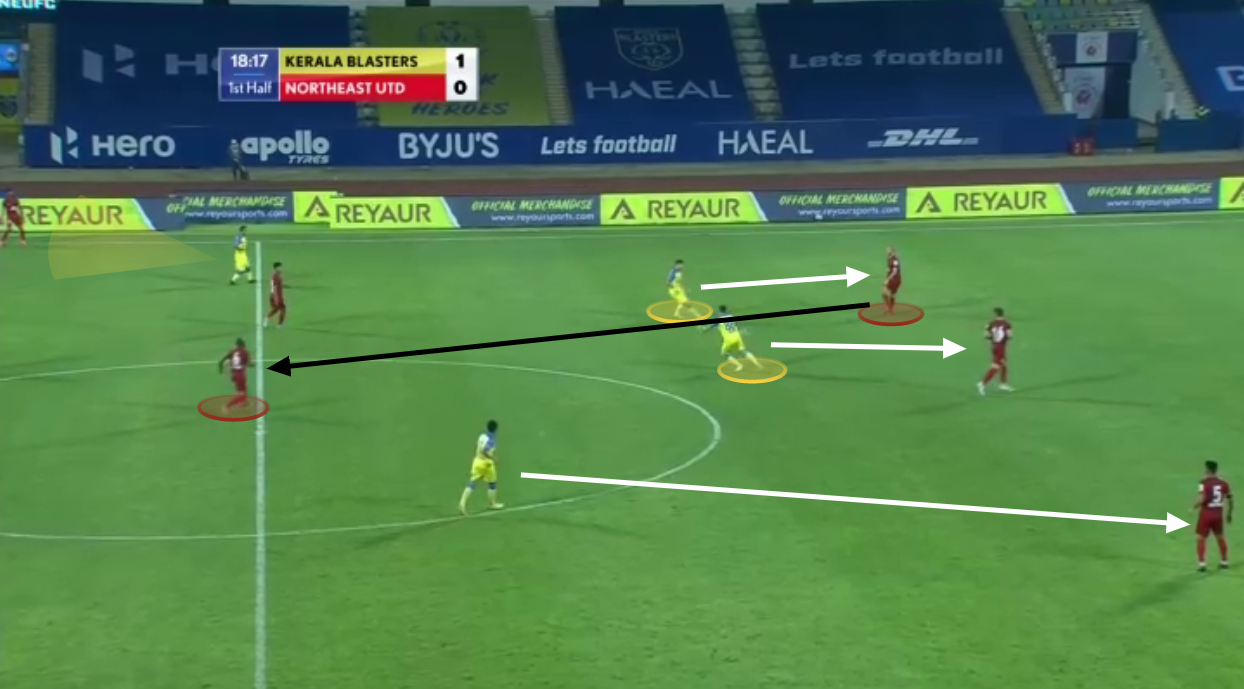 However, it was a rare scenario. 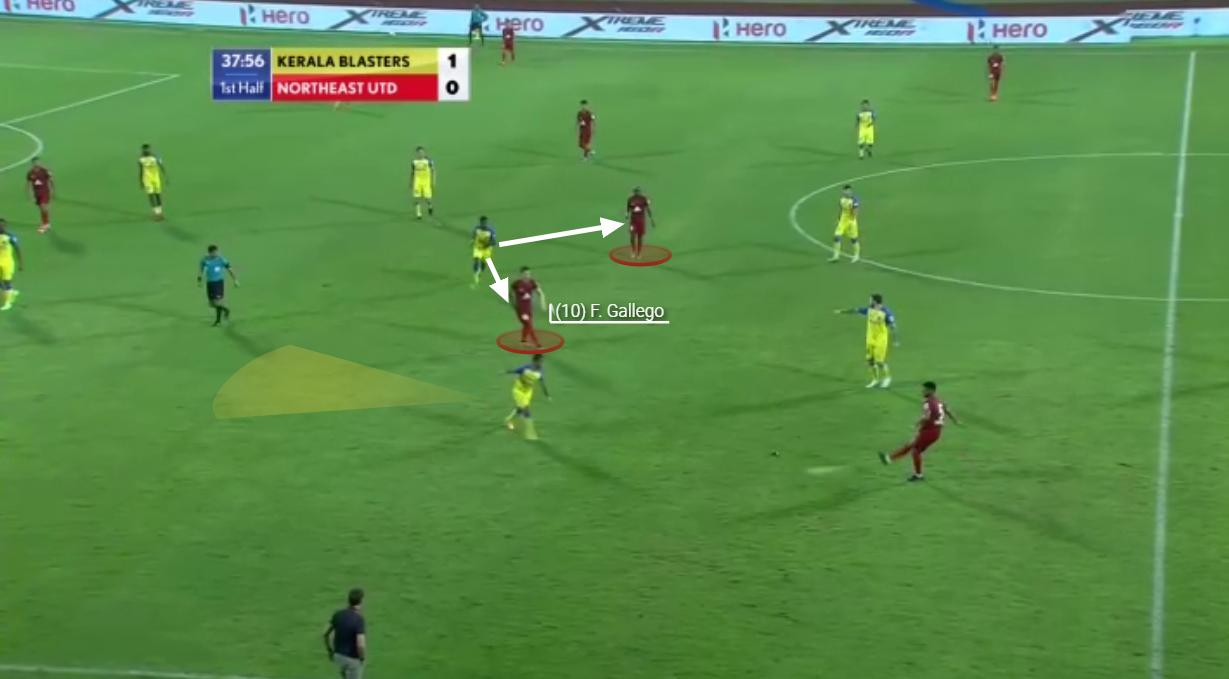 Here, Gallego drops deep to create an overload on Rohit who had Camara and now Gallego to mark. Gallego’s positioning also caused a conundrum in Setyasen’s mind, whether to cover shadow Gallego or the winger on the flanks. It ended up him being horizontal and putting a cover shadow on neither. If you notice, Hooper points to his teammates about Gallego being unmarked. The attacking midfielder creates a decisional crisis on the opposition.

Again in the image below, it can be seen, Gallego’s positioning drags away Bakary Koné but it also attracts Gómez towards himself leaving Lalengmawia unmarked. 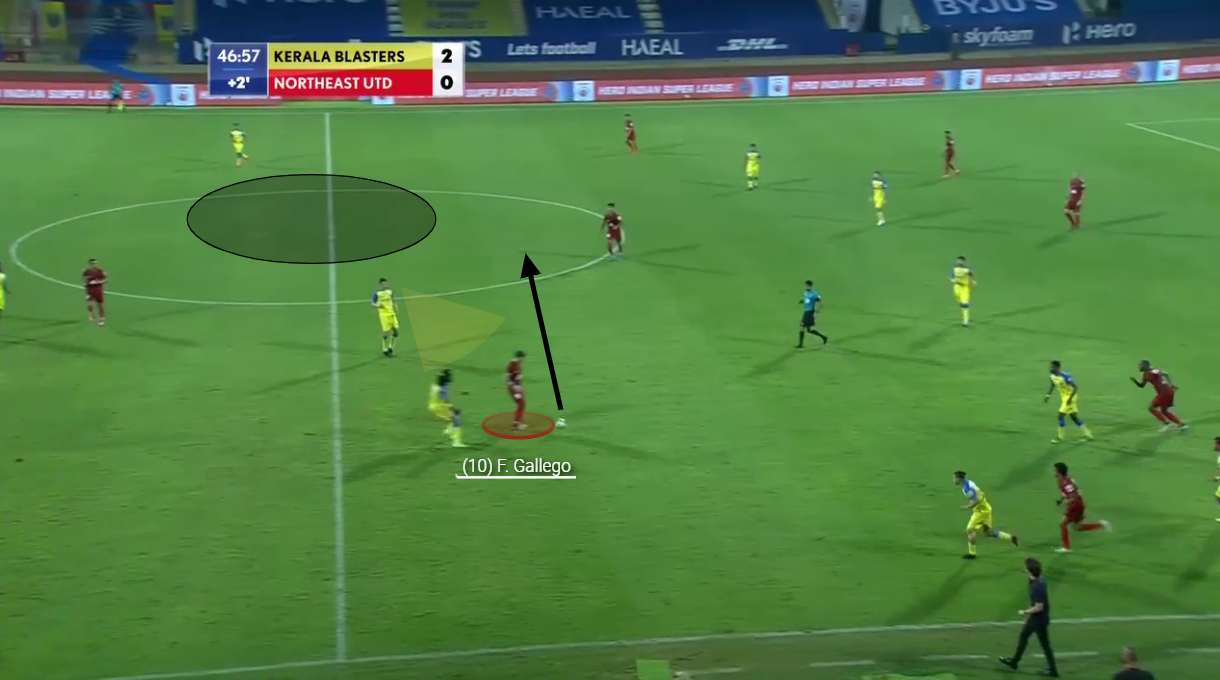 This situation resulted in a dangerous attack for the Highlanders. 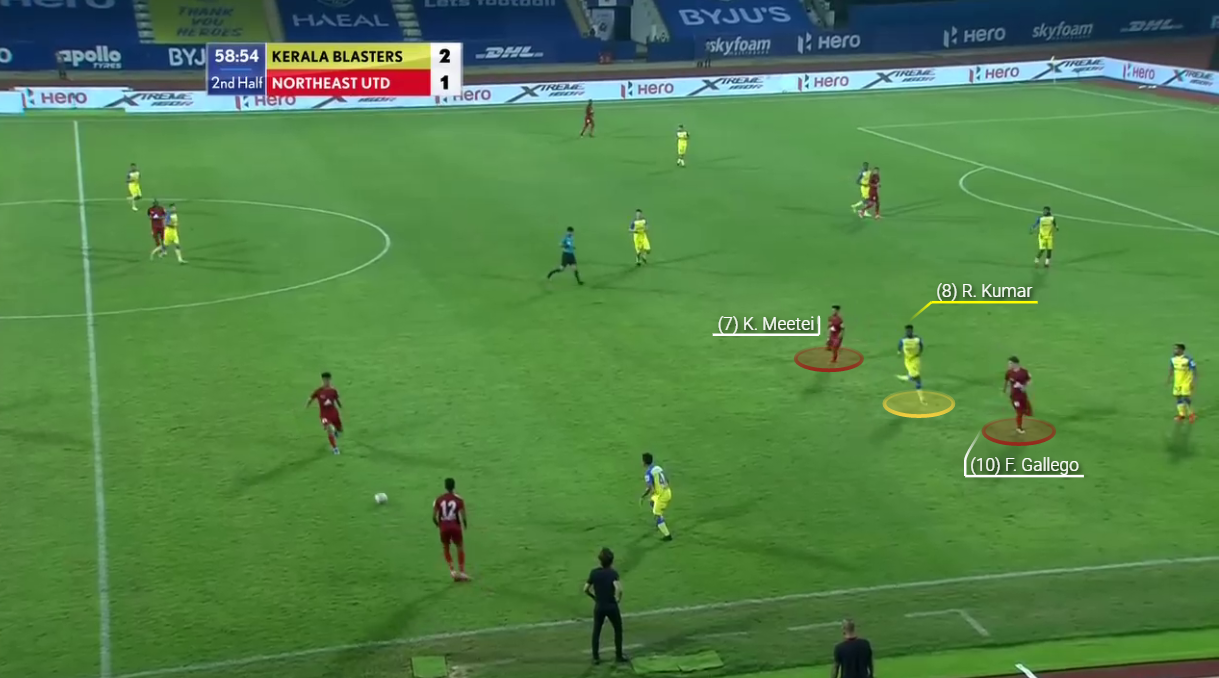 Here, Gallego rotates with the right-winger, Ninthoi. In this process, drags out Rohit from his position leaving Ninthoi with a lot of space.

NorthEast pressed the Tuskers high which can be understood by their 8.08 PPDA (Passes Allowed per Defensive Actions). The Highlanders too adopted a man-oriented zonal marking in a 4-4-2 structure to counter Kerala Blasters’ 3-4-3 build-up structure. 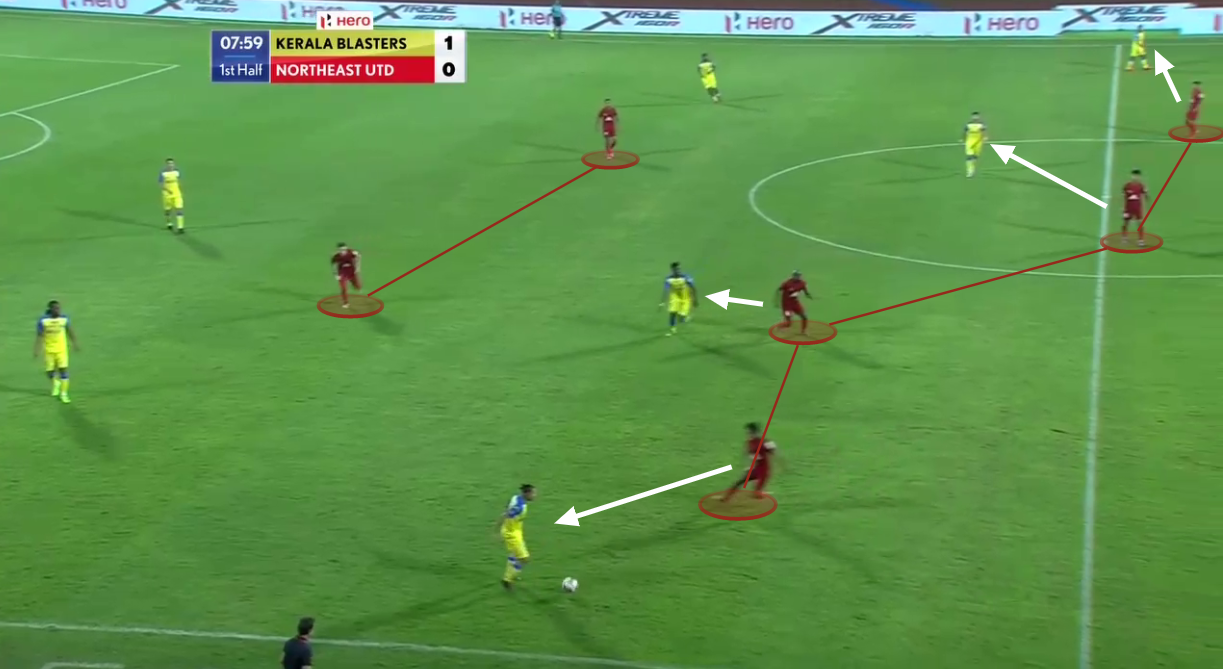 Gallego moved up to form a two-man first line of press. The duo pressed the two centre-backs as well as Gómez who formed the backline during build-up. One striker pressed the ball carrier centre-back keeping the other in his cover shadow. The second line of press marked Blasters’ full-backs, Rohit and Cidoncha (who dropped deep most often during build-up) around their space.

Blasters’ backline had an advantage against NorthEast’s first line of press as they were against a two-man press. Normally, one of the two centre-backs would carry the ball up, bypassing the first line of press as they were left with ample space. However, on some occasions, the backline also used Rohit Kumar as a bounce pass to create more space and time for one of the centre-backs. 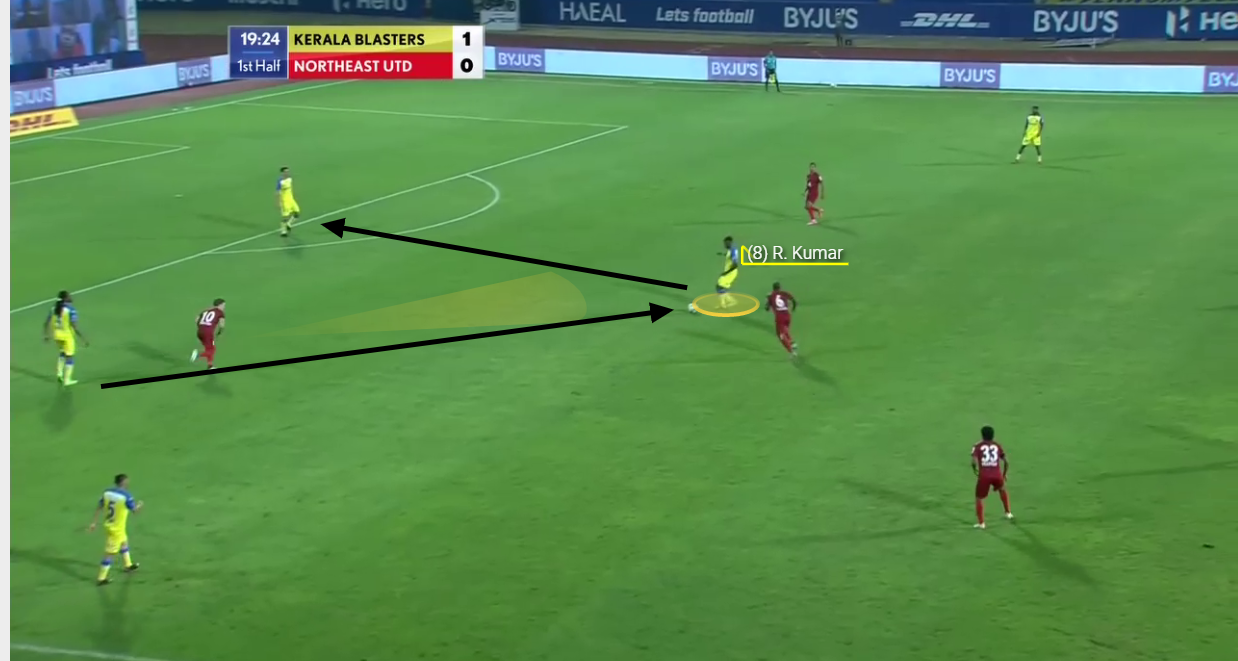 Here, as you can see, Rohit Kumar is used as a bounce pass which attracts Gallego. 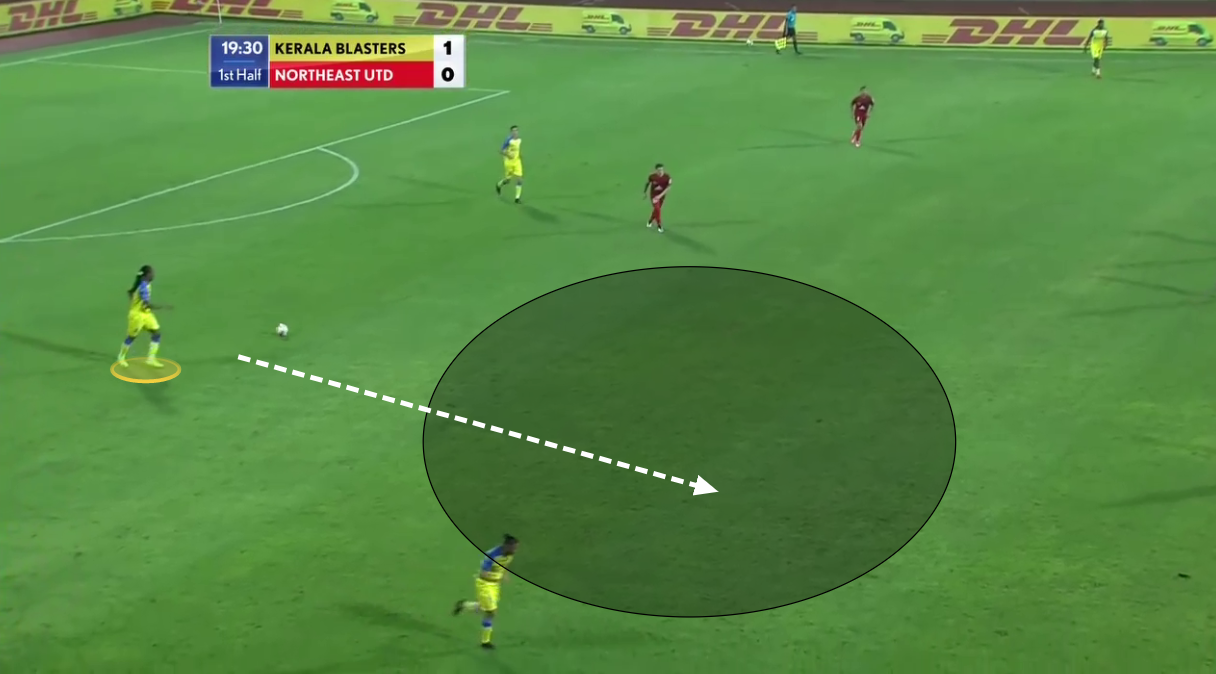 It leaves Koné with more space and time to carry the ball forward. 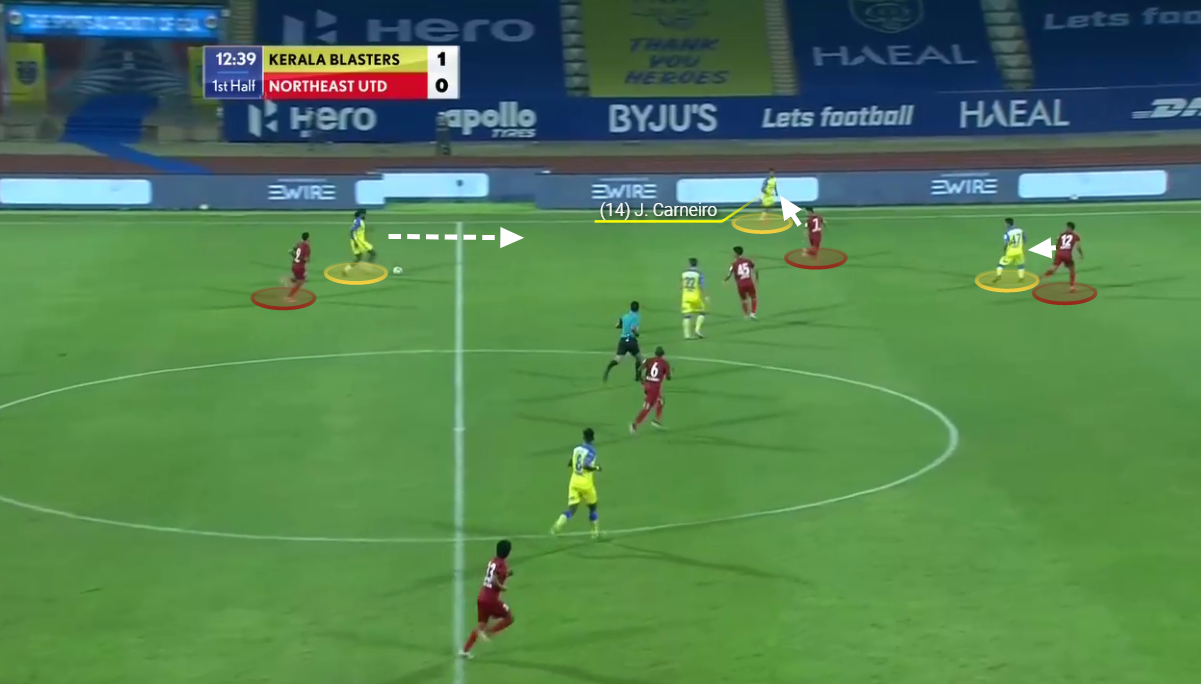 As you can see, Costa Nhamoinesu carries the ball to the opposition half, Appiah, the former Crystal Palace man, presses him keeping Gómez in his cover shadow rather than the right-winger, Ninthoi engaging with him. The Kerala Blasters left-winger inverts and the left-back makes an overlapping run. But again due to NorthEast’s man-oriented nature, the right-back sticks to the Blasters left-winger in the half space and the Ninthoi follows the left-back.

The wingers inverting to the half space and the full-backs making an overlapping run and providing the width was a common mode of build-up by Kerala Blasters. However, along with that, there were some other elements to their rotation. 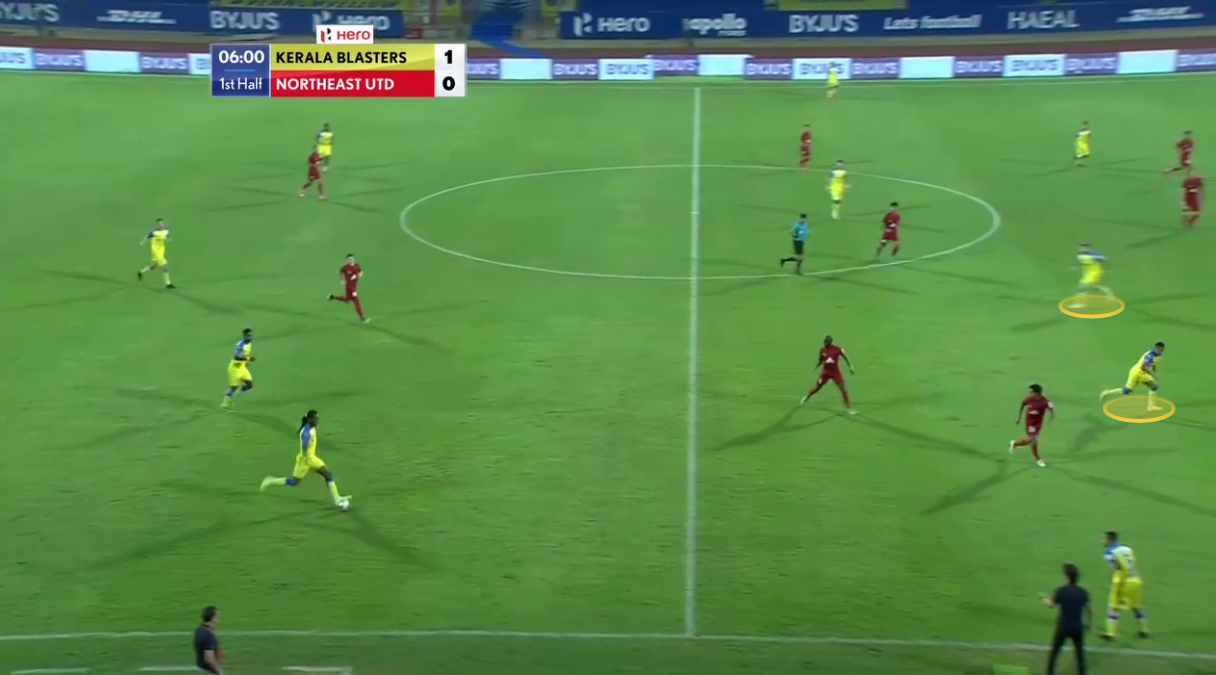 Here, Seityasen inverts to the half space initially and Nishu Kumar on the flank. However, the other rotational aspect was that when Hooper dropped to that space, Seityasen would vacate the space and look for exploiting other space. With Camara keeping a tab on the right-winger through cover shadow fails to notice the rotation which leaves Hooper unmarked. However, Koné failed to notice Hooper’s movement and looked for a different option, in this case.

Though the wingers and full-backs of NorthEast stuck to their man, on rare occasions, the full-back of Kerala Blasters would gain a two-foot advantage. 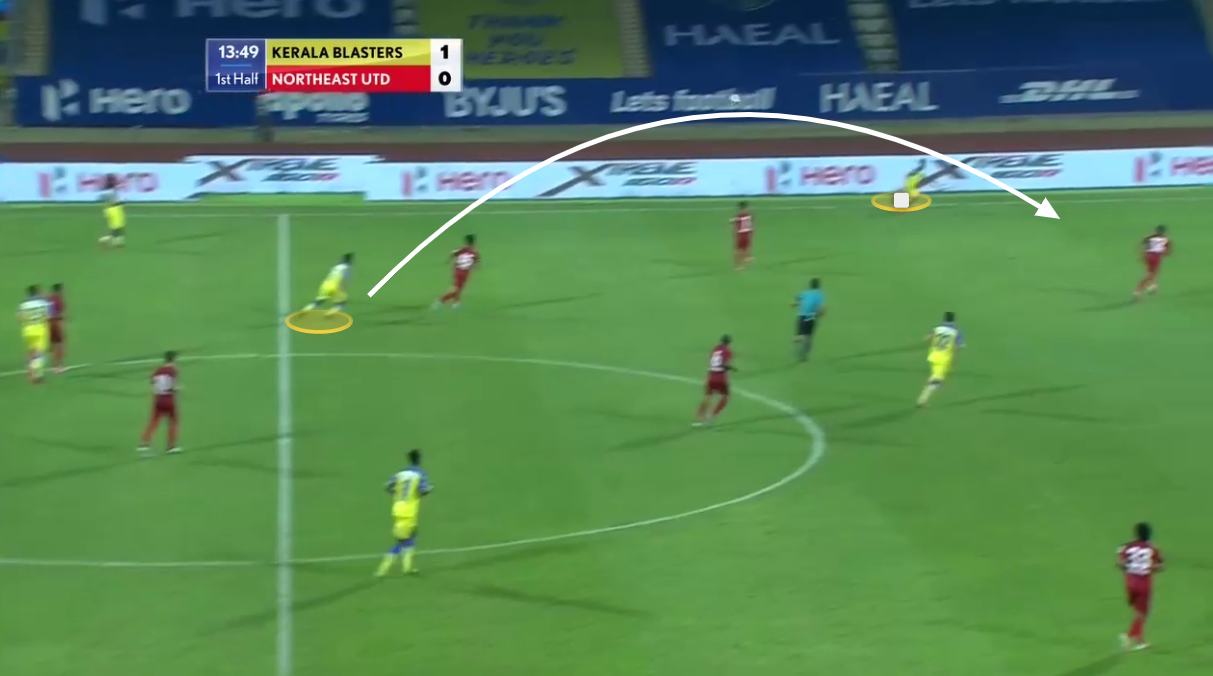 As can be seen here, Jessel Carneiro is a few yards ahead of Ninthoi (RW). Blasters did create a dangerous situation from this play but could not affect the scoreline.

Blasters also took the help of the 3rd man principle. With one of the centre-backs moving up, Hooper dropping down, and a winger in the half space, they formed a diamond along with a full-back. 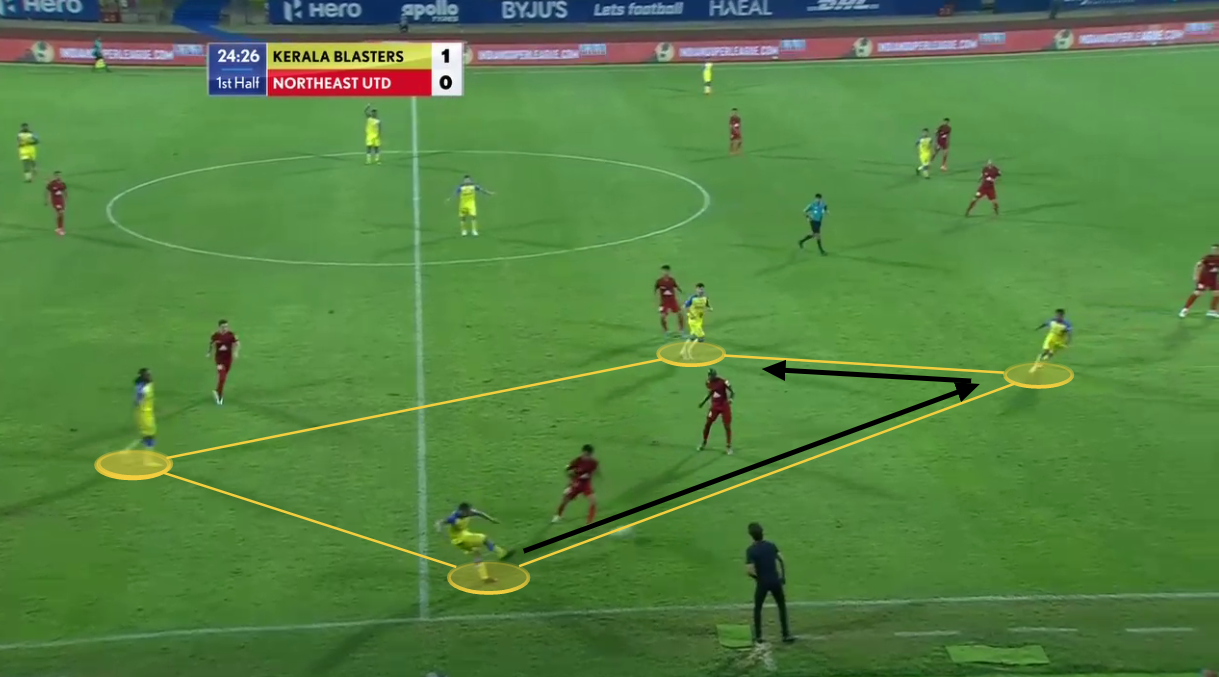 Kerala Blasters took advantage of the diamond whenever they could see a passing lane. Here, Nishu Kumar could see Seityasen unmarked and passed the ball to him who in turn laid off the ball to Hooper. Hooper switched the ball to the other half and Blasters continued their build-up.

The fixture was a cagey affair throughout, as can be understood from the analysis. It was a battle of patience. Both the teams tried to build-up from the back but the pressing of both the teams was top-notch, giving each other no space.

A fair result, even though Kerala Blasters went 2-0 up in the first half. The sheer commitment and never say die attitude of the Highlanders was commendable.