Over the weekend, Borussia-Park hosted an authoritative display from the home side, Borussia Mönchengladbach against Schalke 04 in the Bundesliga. This tactical analysis will take a closer look into both side’s tactical setup, and why Gladbach ended up so dominant.

Gladbach, led by Marco Rose, have performed well to this point this season, sat in seventh in the league. In what has been a topsy-turvy season thus far in the Bundesliga, Gladbach have managed to coordinate some strong Champions League displays whilst still staying in the hunt for a top-four finish in the league. In this analysis, we will uncover how Rose’s tactics resulted in such a presiding victory.

Schalke, coached by Manuel Baum, on the other hand, look like one of the worst sides in Europe. Their defence has got more leaks than a sieve, while their attack is just as equally blunt, so it comes as no surprise that they have not won a single game of league football this term. This analysis will examine where it all went wrong again in this fixture. 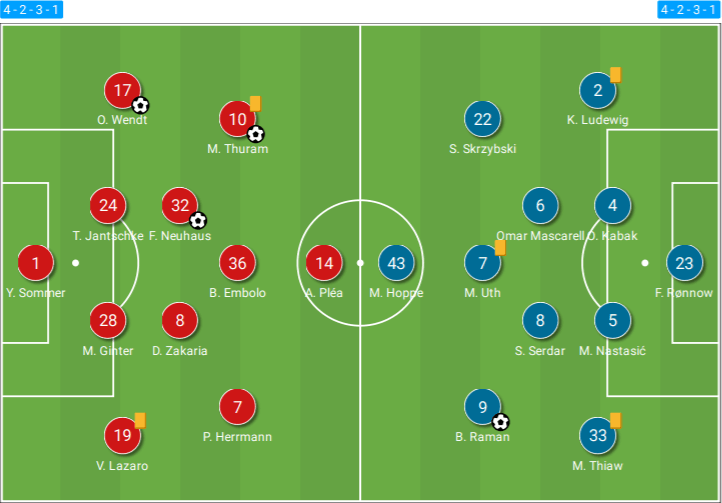 Rose had a couple of main injury concerns to deal with in this game, namely Ramy Bensebaini and Jonas Hofmann, with the latter becoming evergreen this season for die Fohlen. In a system which requires its men to be tactically versatile, it will then be a delight for Rose to have Zakaria back in the side, after a period on the sidelines. Nico Elvedi also sat this one out, with Jantschke coming in to replace him.

Baum matched his opposition’s 4-2-3-1 formation in this game and chose a plethora of young talent to start the game in the process. Missing both Salif Sané and Gonçalo Paciência, who recently picked up knee injuries, and Bastian Oczipka, who was out with a muscle injury, Schalke also recently suspended Amine Harit and Nabil Bentaleb from team training, meaning they were not picked for this match either. This, on top of also terminating Vedad Ibišević’s contract at the end of the year (after signing just a couple of months ago), makes for a messy picture on and off the pitch for Schalke currently.

In this game, out of possession, Gladbach played a narrow 4-2-3-1/4-4-2 system, which would often see Zakaria drop deeper to form a diamond shape between him and the centre-backs, to aid ball progression when they recovered the ball. Gladbach pressed from the front, usually utilising Pléa and one of the other attackers to press in tandem, to force the opposition to go long or play the ball out wide.

Under Rose, Gladbach utilise their full-backs heavily in the build-up, switching to a 2-4-3-1 in possession where the full-backs will join the midfield to create numerical superiority in central areas. This forms the basis for Gladbach to control possession and break up the field with pace. In transition, they looked to play quick vertical passes or utilise one of their ball carriers from midfield, in the form of either Neuhaus or Zakaria. 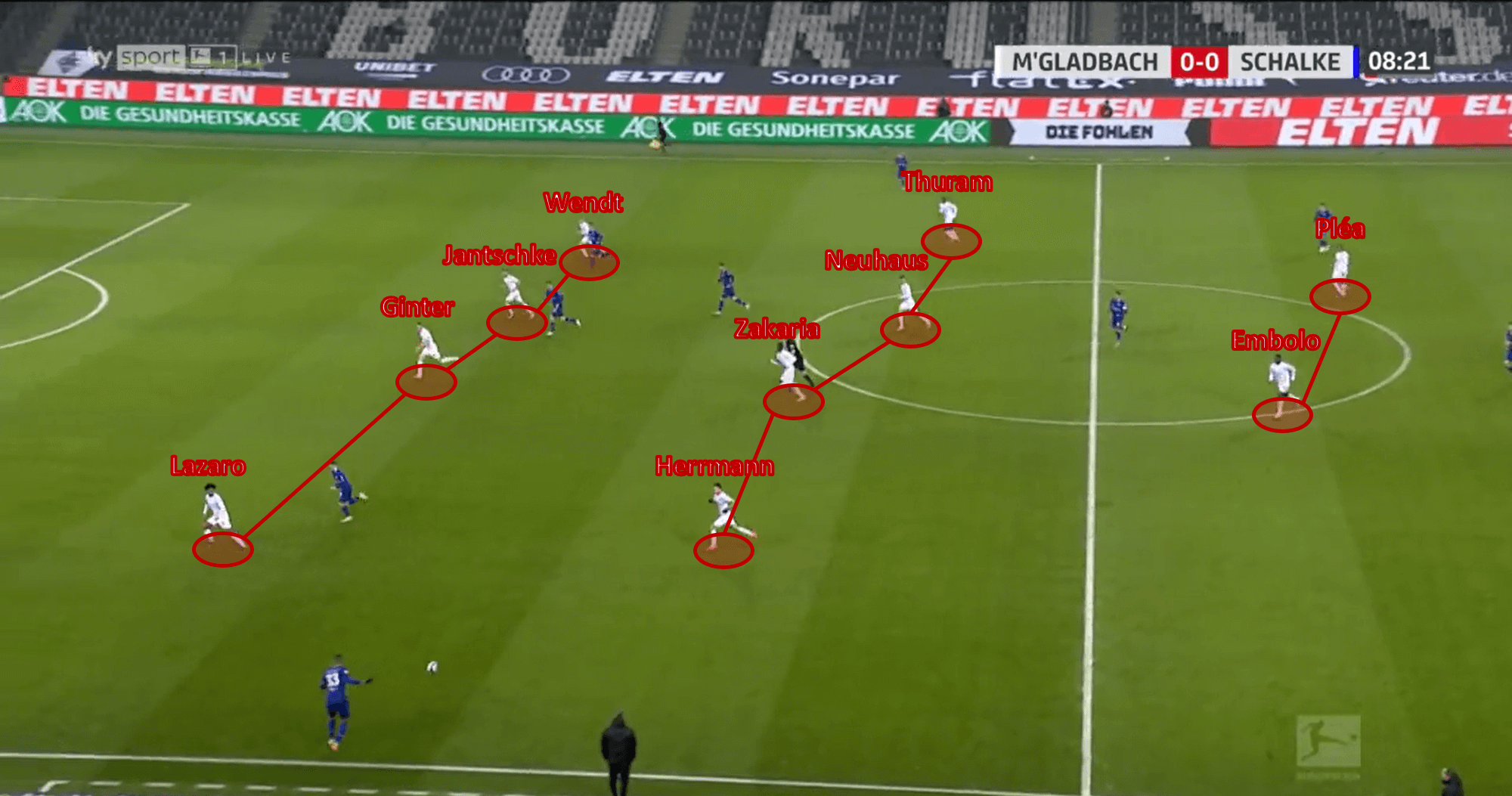 With the ball out wide for Schalke, Gladbach drop back to form a narrow 4-4-2 formation out of possession. 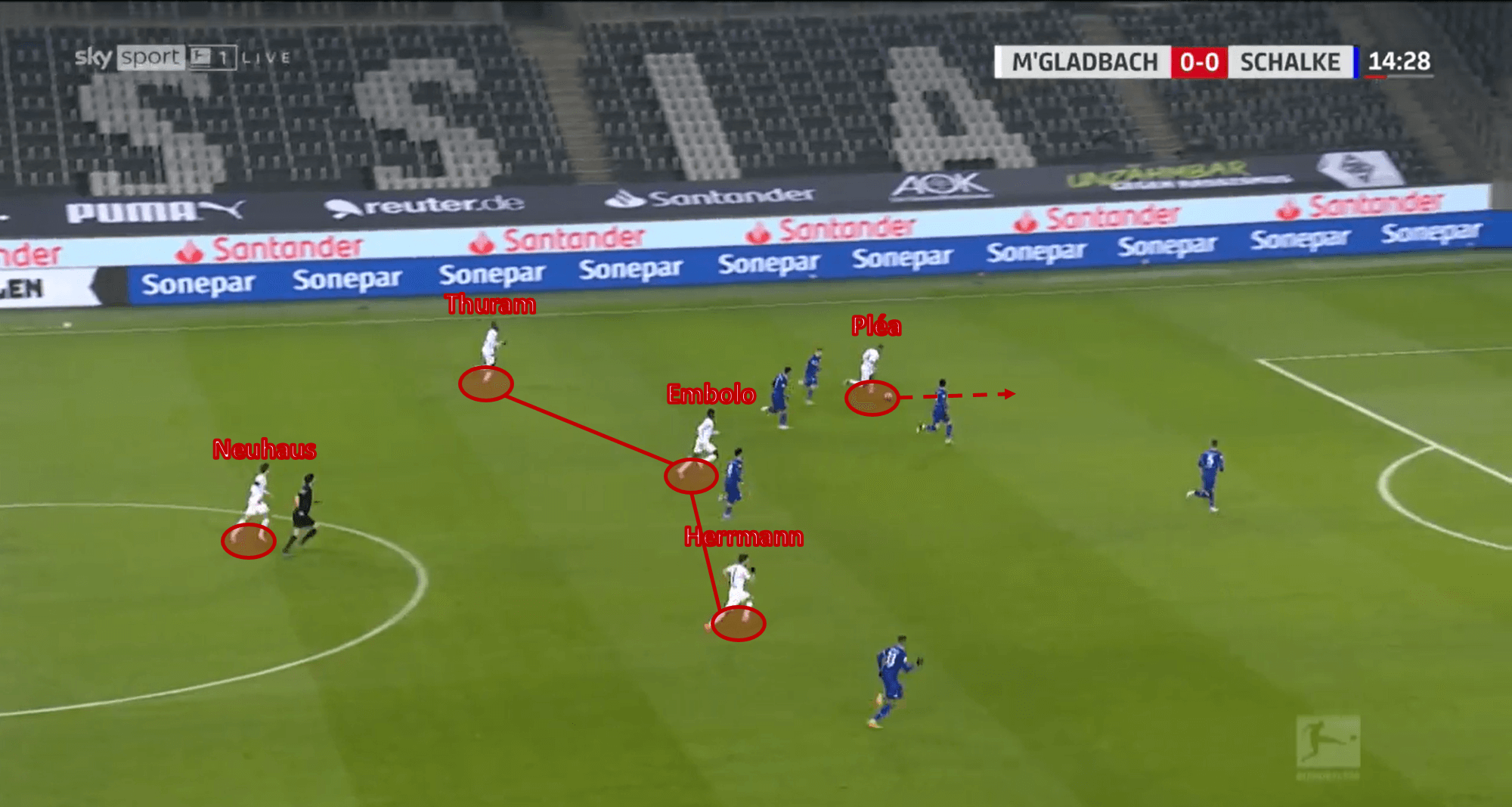 In an attacking transition, we see Gladbach’s forward line shape up with three men running behind Pléa and Neuhaus instigating the play with his long passing.

The bulk of Gladbach’s chance creation came down the centre of the pitch in this game. Though they had a few decent chances in the opening exchanges of this match, they went through a period of pressure from their opposition in the first half, until the latter stages of the half where they began to create quality chances of their own.

A common theme prevailed in this match, which was Zakaria recovering the ball once Schalke approached their final third, quickly offloading it to Neuhaus, who would play a smart, measured pass into Schalke’s final third for one of Gladbach’s forwards to latch onto. This is not to say Zakaria is not capable of these ranging passes, only that this was not his instruction in the game. Neuhaus was the hub of creativity in this game, and he fulfilled his role superbly. 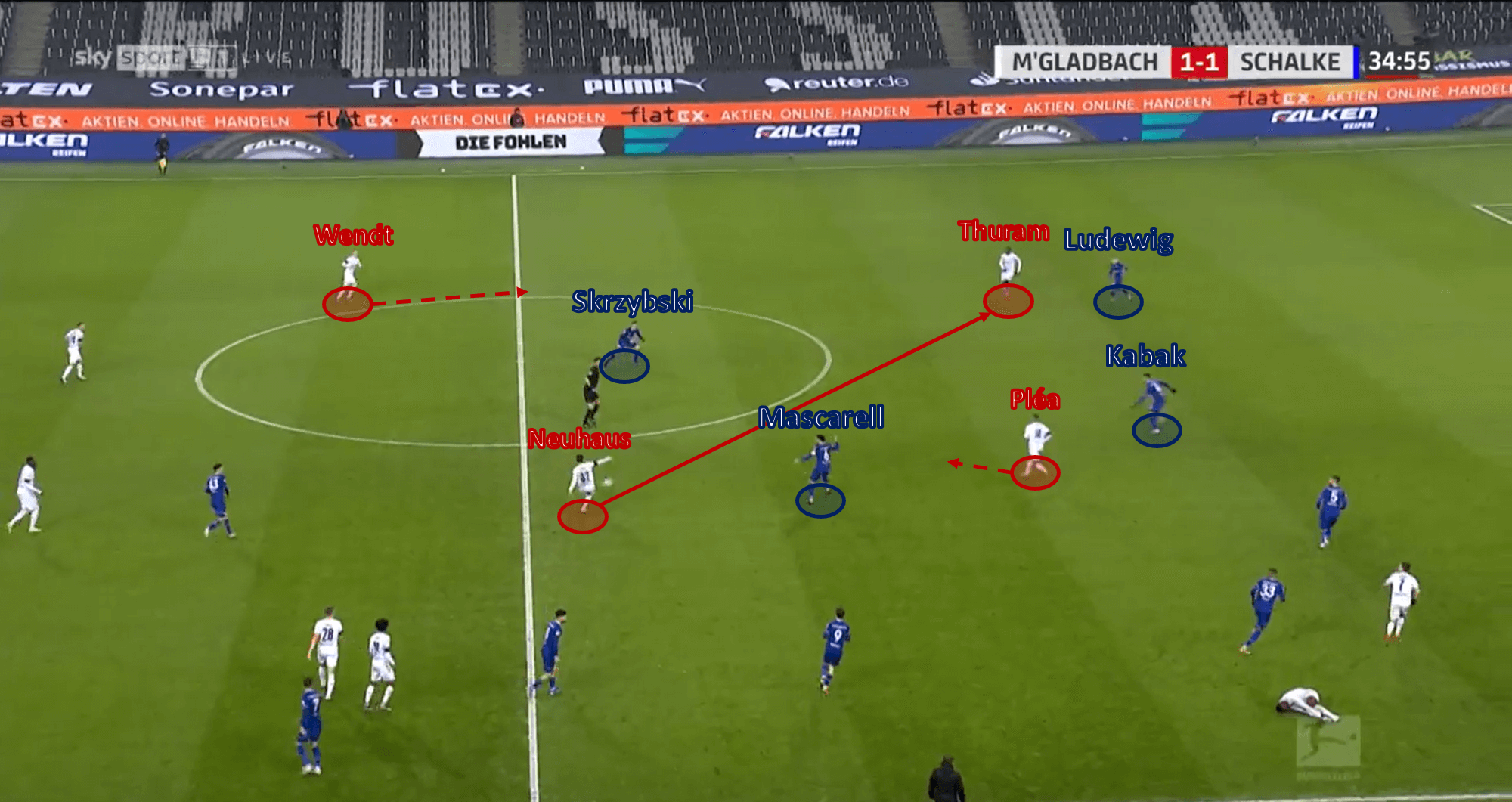 Neuhaus receives the ball in midfield, and immediately plays the vertical pass towards Thuram. Pléa is dropping back into space, while Wendt begins to make his run down the half-space. 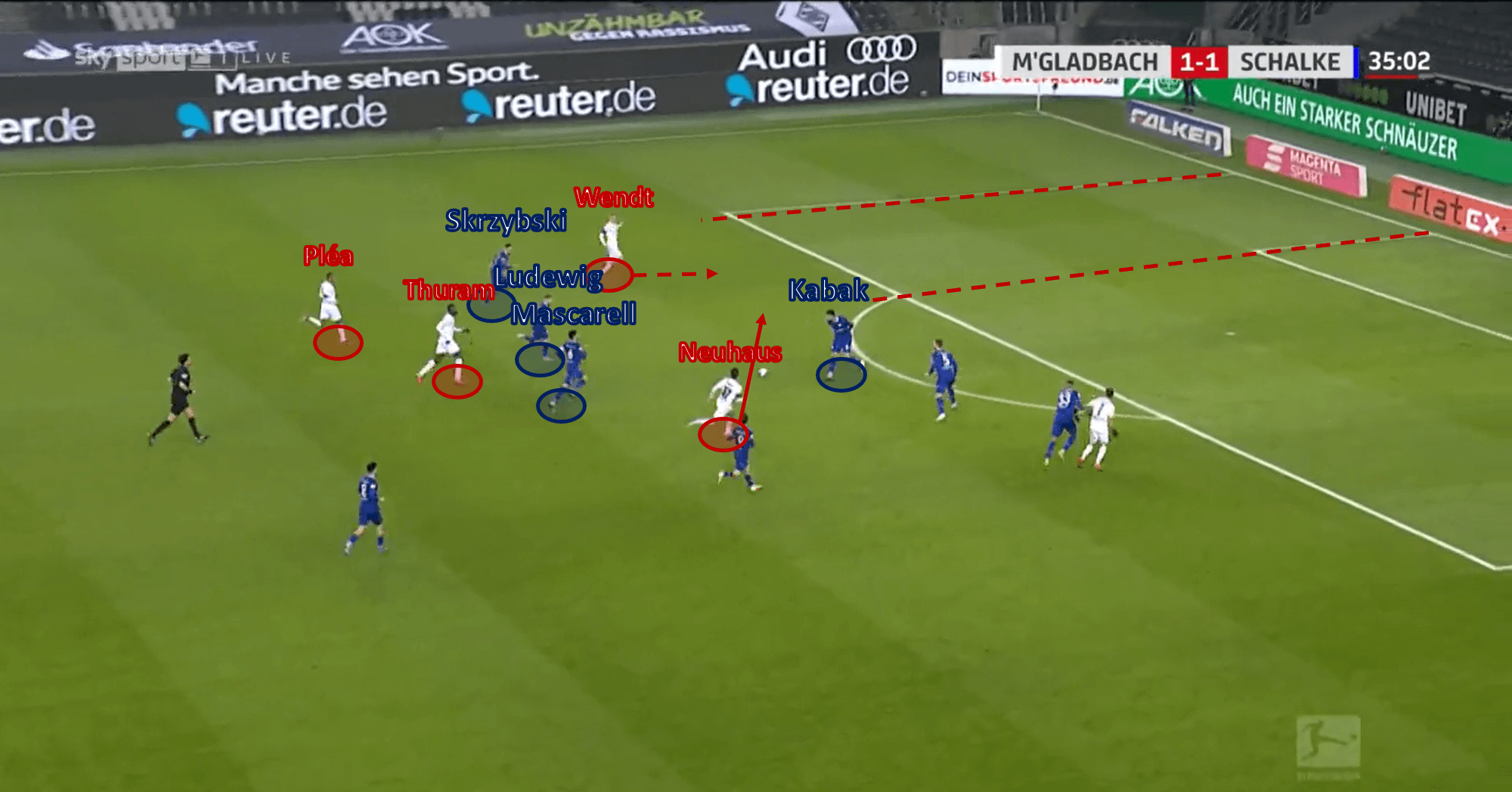 Schalke’s defenders have been dragged out of position by Pléa and Thuram to create space for Wendt, who is sent down the half-space by Neuhaus, which ends in a composed finish into the bottom left.

Gladbach’s attacks seldom stretch the width of the pitch to create space centrally, with Rose believing that the highest quality chances can be carved through the core of the pitch. This is an intriguing approach in the modern game, given the emphasis on marauding in a lot of elite teams at the moment, with Borussia Dortmund being a prime example of this within the Bundesliga.

Instead, their full-backs come inside to provide numerical superiority in the midfield, much like we have seen in multiple Pep Guardiola sides, such as Philipp Lahm at Bayern Munich. Although the tactical concepts are slightly unalike, they are important facilitators in build-up who look to make runs into the channels when their side attacks as well, meaning they have to be competent in all phases of play, which is a tricky task. 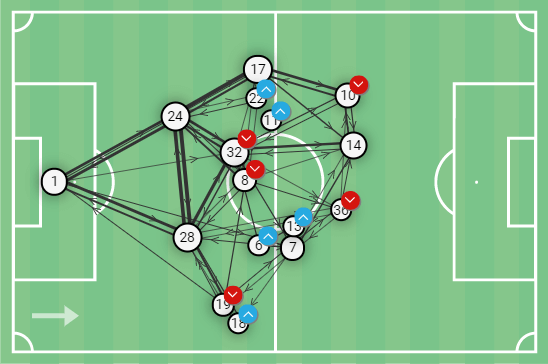 The only tweak to this tactical setup we saw in this game was through Lazaro dropping deeper than his full-back counterpart Wendt. This was largely to counteract Raman on the left wing. Due to Raman’s typically preferred role of centre-forward, he pushed high up the pitch, and in Gladbach’s man-oriented pressing system, this pushed Lazaro back further than he might have liked.

Regardless of the system, Rose’s pressing principles remain the same. The attacking midfielder, which in this game was Embolo, would work in tandem with one of the other attackers up front to both press the man on the ball and cut off passing lanes. Though, largely the pressing system is man-oriented rather than space-oriented.

The pressing efforts are not restricted to the forward line, however, as the full-backs (who join the midfield as we mentioned) and midfielders operated in this man-oriented press and are often far busier than the forwards in their pressing duties. The full-backs will line themselves up against either the wide midfielder or the opposition full-back to eliminate the option for the long balls to be played out wide. 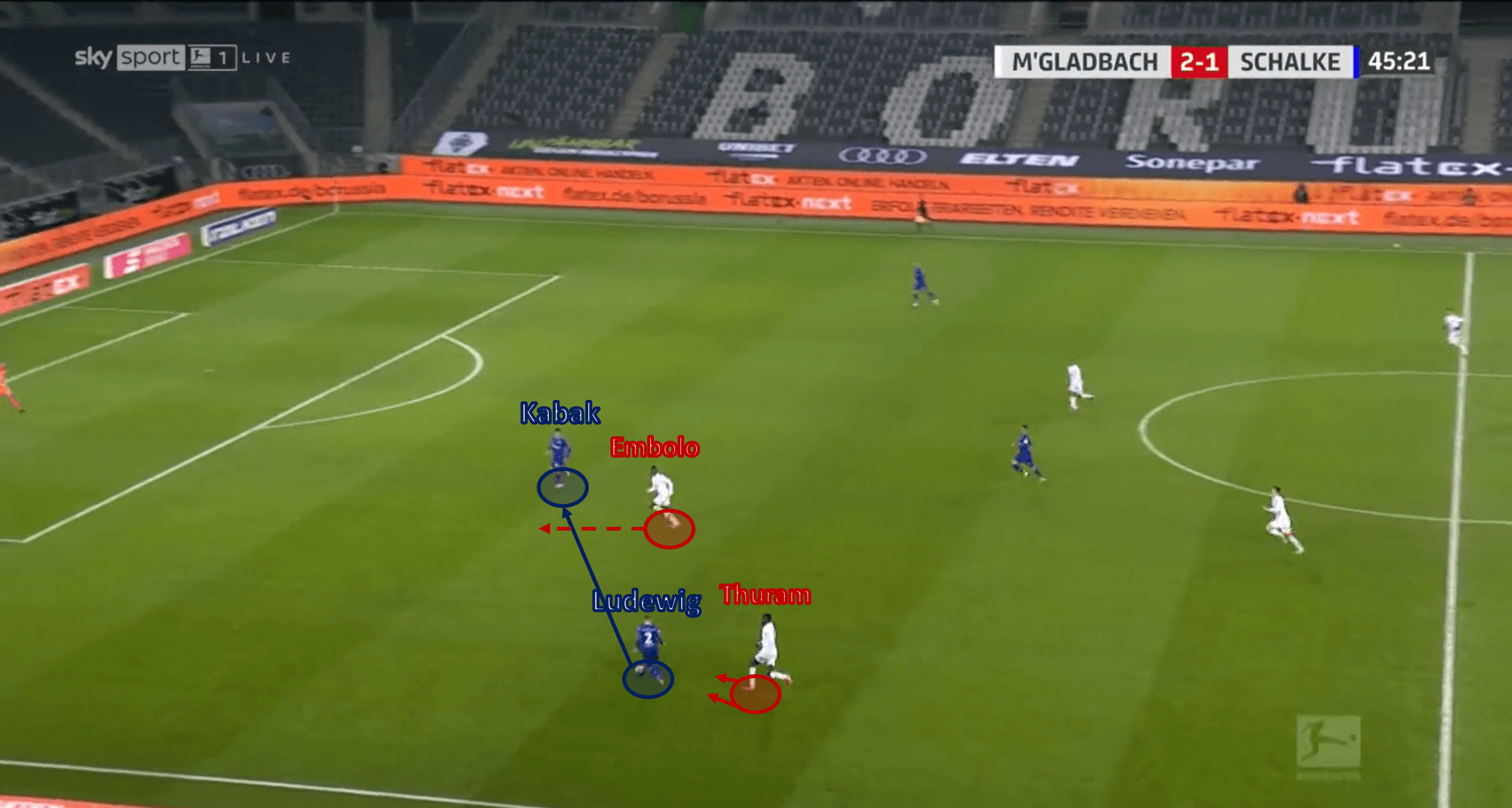 While Thuram presses the man on the ball, Embolo anticipates the path of the pass. 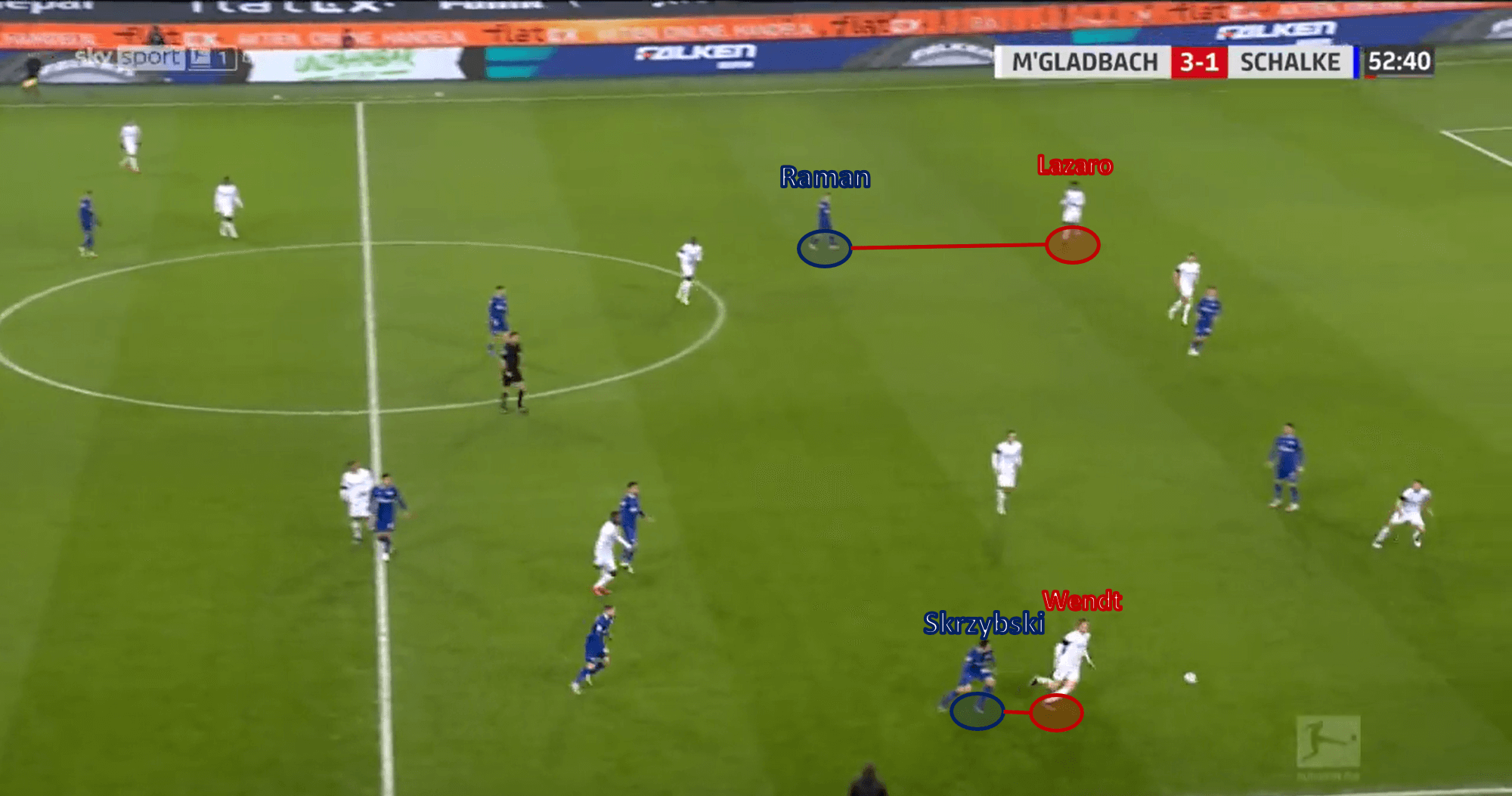 Here we can see Wendt stay tight to his marker as he just recovers possession. On the other side of the pitch, Lazaro gives enough space between him and Raman to nullify the threat in behind.

When they do retrieve the ball, Rose’s men do not waste any time in progressing the ball up the field. Thankfully in this game, Rose utilised two very dynamic midfielders are both good at playing vertical passes and ball carrying. The interchanges between these two midfielders and the forwards were important to their victory in this match.

Their goal in this game was to drag one of Kabak or Nastasić out of the defensive line, to create space for the through ball into one of their fast attackers. In attacking transitions, Gladbach will typically have four players operating between the lines, which facilitates their short interchanges. In this game, this worked well, and they did not have to rely on their plan B too often, which would be to force their full-backs high and wide to provide width. 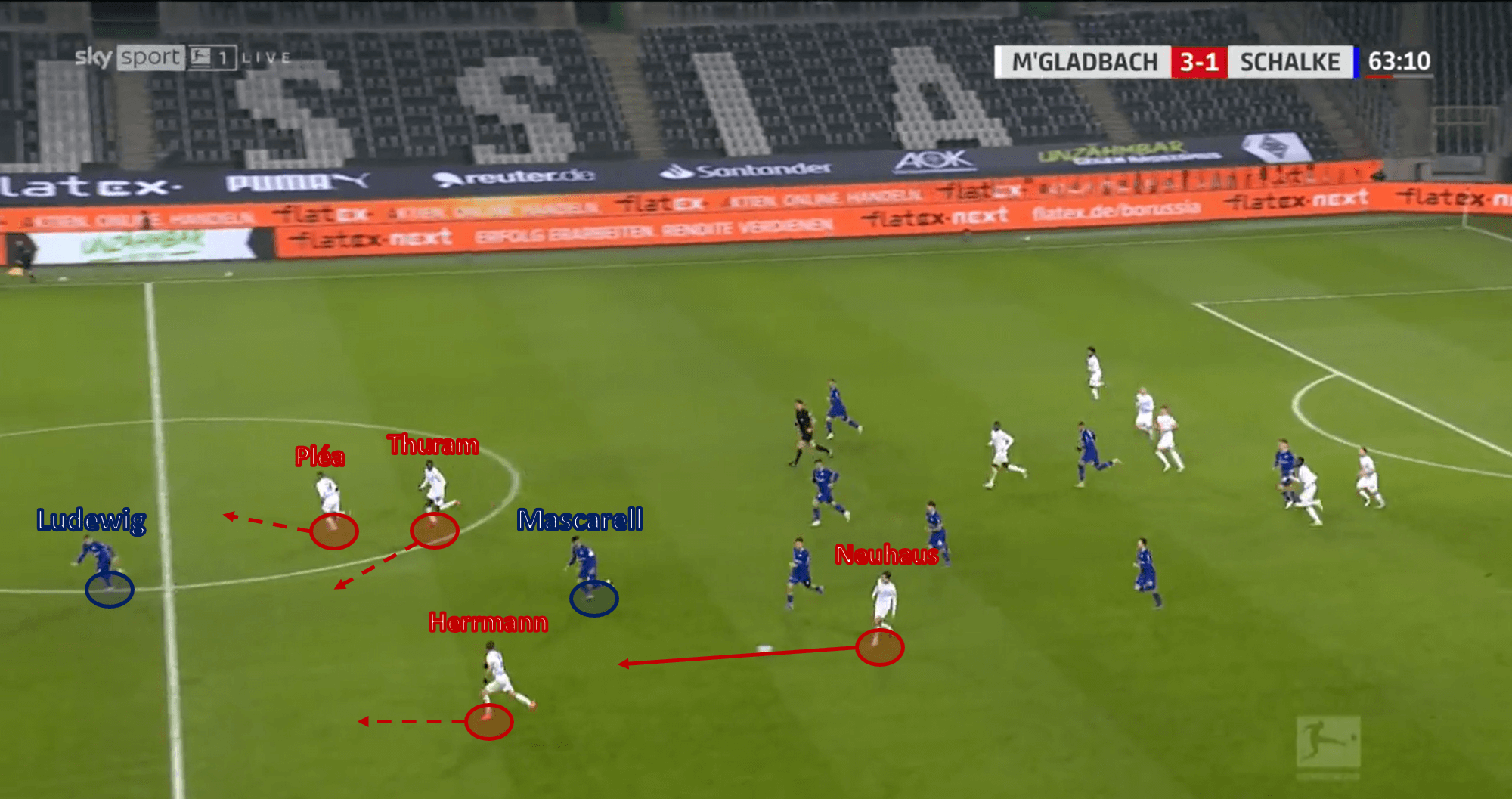 Again, Neuhaus instigates the attacking transition, playing the ball into the path of Hermann down the channel. 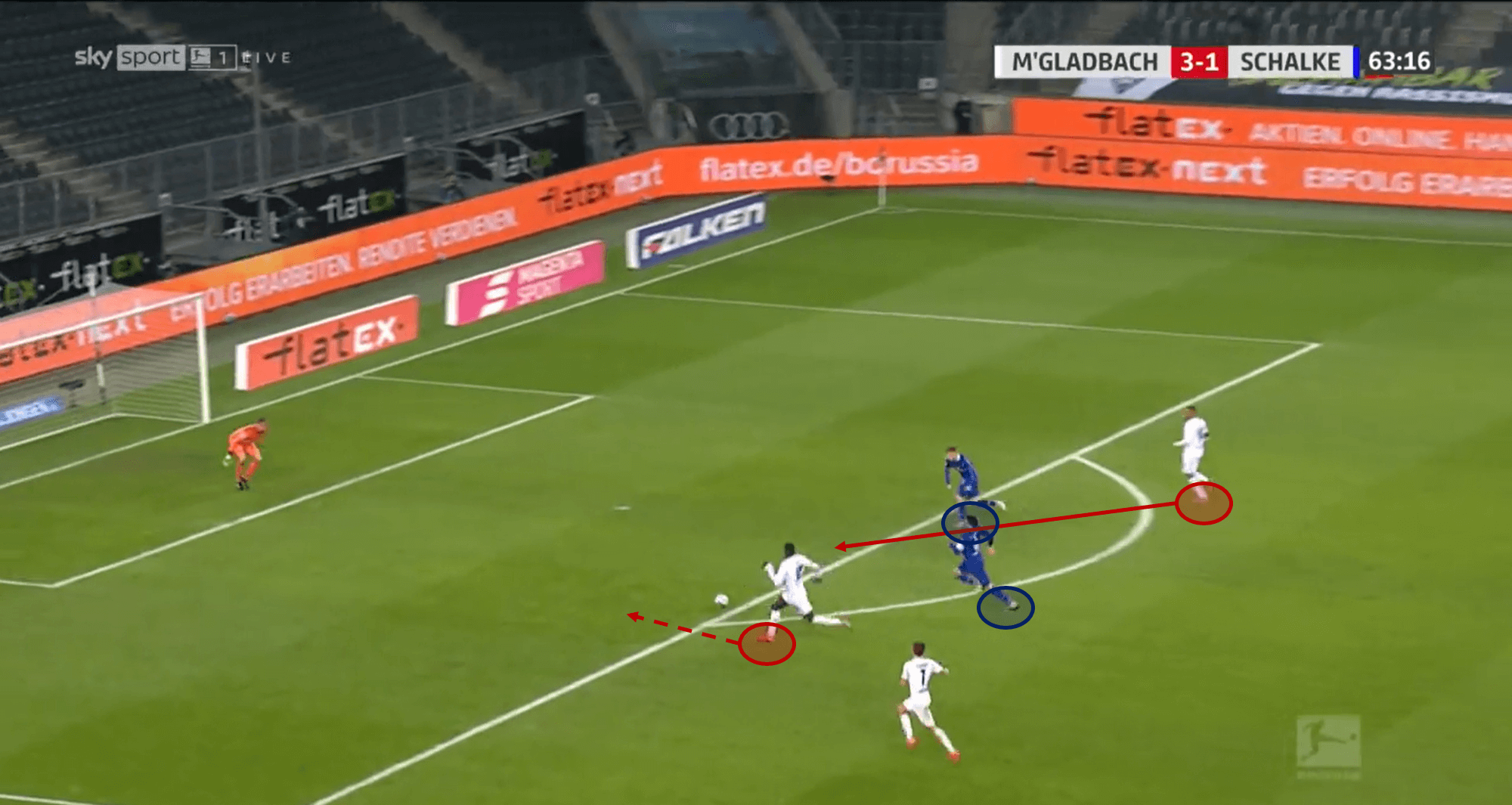 Thuram finds himself through on goal after Pléa makes the outside run to drag the defenders away before playing the through pass.

Gladbach hit Schalke on the break like this numerous times in the game, and they were able to create ample opportunities through doing so. Schalke struggled to contend with Gladbach’s speed of thought in these moments, with the interplay of Thuram, Pléa, Embolo, and Herrmann too fast for them. Individually, Schalke’s centre-backs are not bad players, nowhere near. Nevertheless, their decision-making and coordination in this game was quite bad, a game to forget for them both. 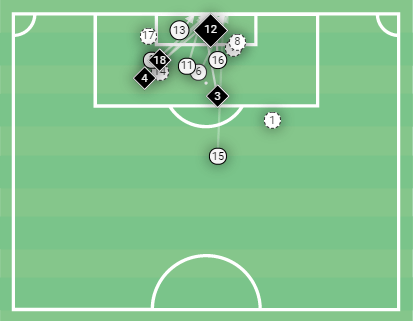 It was briefly mentioned earlier that Schalke enjoyed an encouraging period of play in the first half, which was during the 1’-30’ minutes. Generally, in this period, they were keeping Gladbach at bay, and they were loading on the pressure in attack with shots on goal. Granted, these shots were largely of poor locations, but the standards have been set very low at Schalke at the moment, so this context has to be taken into consideration.

In defence, Baum typically likes his side to play in a 4-5-1, but in this game, he opted for a more traditional 4-4-2 structure out of possession. Here, they sat back and soaked up opposition pressure, utilising the strong ball-playing abilities of his centre-backs to play out from the back. They looked to restrict passing options for Gladbach, and they did this well for a period. 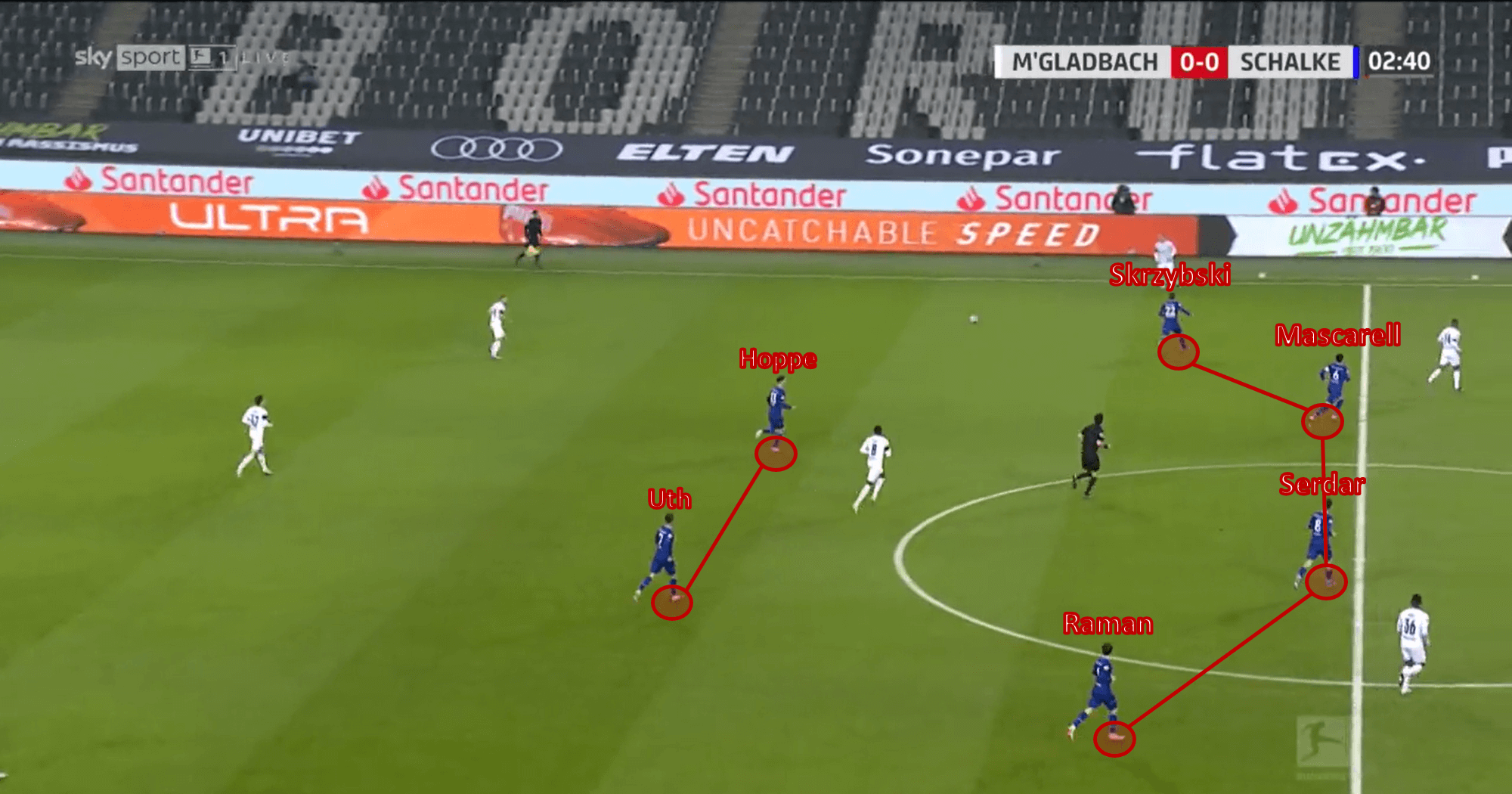 Similar to Gladbach, Schalke here utilised a 4-4-2 out of possession in a man-oriented press which would occur across the pitch.

Under new coach Baum, Schalke’s pressing in insistent, if a bit unorganised. There seems to be no particular pressing triggers for their forward line, they just put their opponent’s under pressure for the full ninety. This explains their strong start and poor finish to the game, perhaps.

Nonetheless, they did capitalise on an individual error by Gladbach, which you need to be capable of doing at the top level. Youth prospect Hoppe came in and gave this game his all with seemingly little to no direction in terms of instructions. Though, Raman was actually the constant threat for the entire game, pressing Lazaro back further and further as the game went on, and was rewarded with a goal, which was an elite finish by the by. 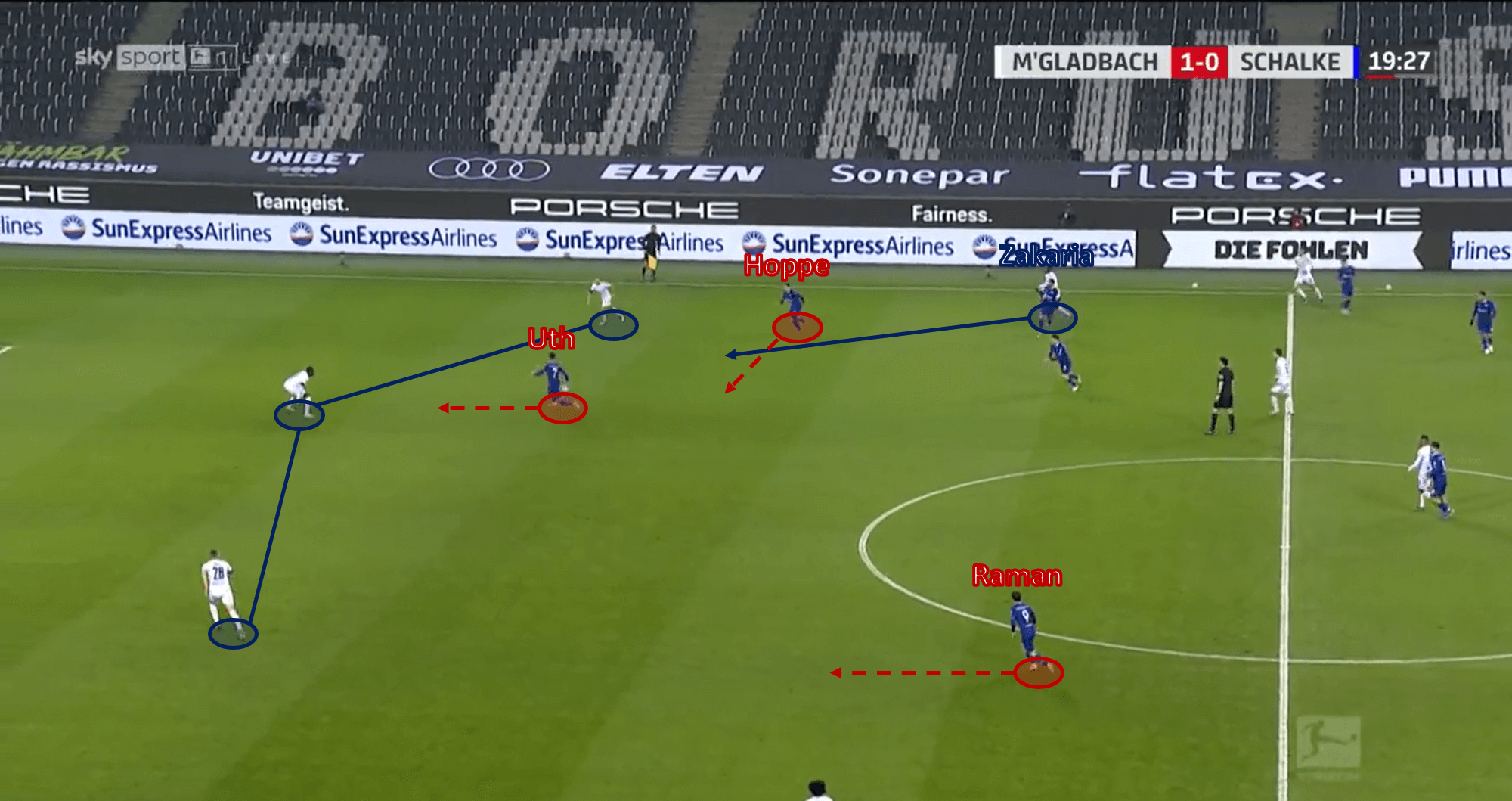 Zakaria mistakenly plays the ball into the path of Uth, who collects the ball and slows down his pace for other runners to come into play. 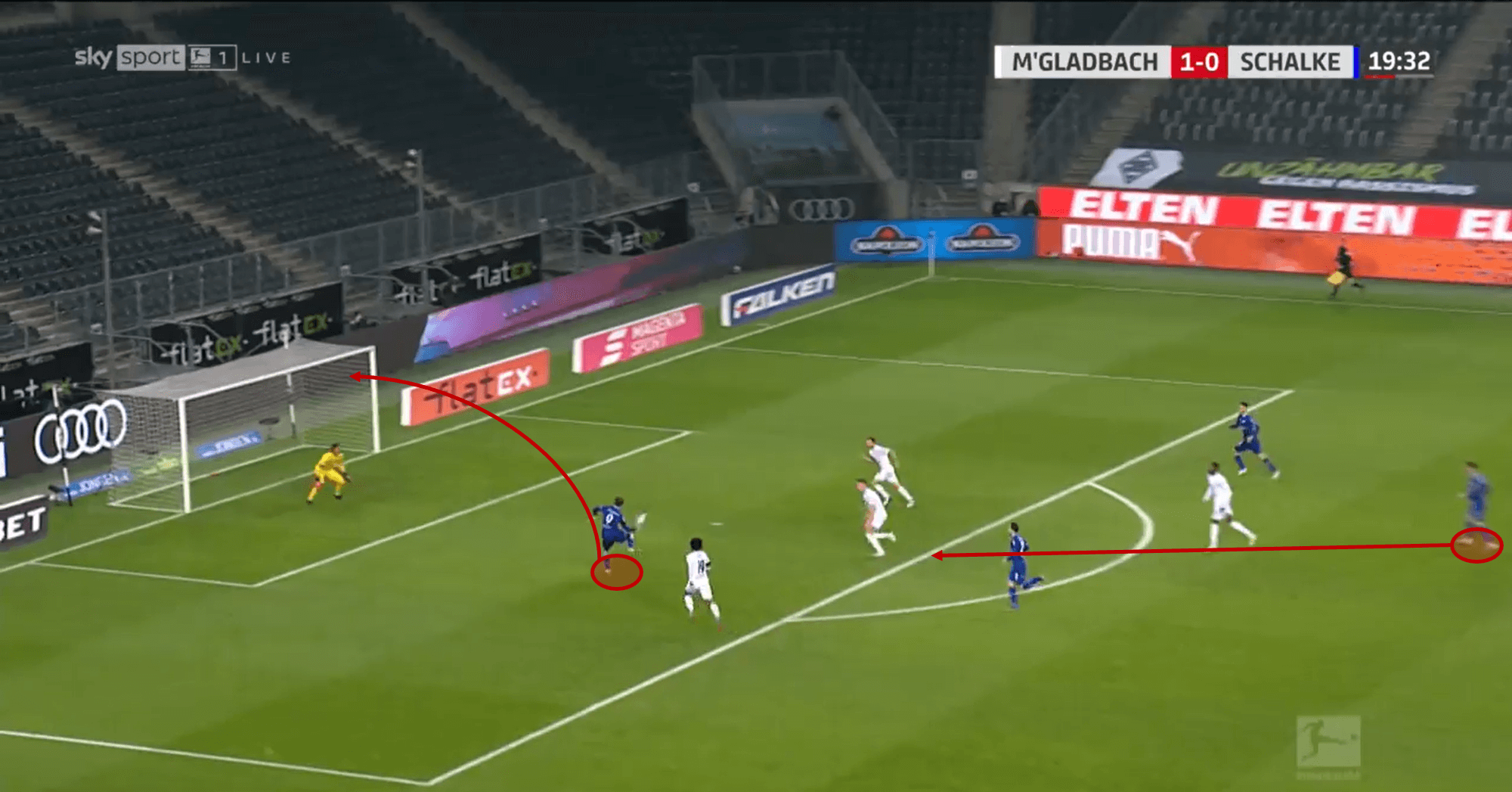 A clipped ball into the path of Raman from Uth is perfectly weighted and timed. Raman strikes it emphatically first time into the top right corner – a rocket.

Schalke ended up playing a sort-of asymmetric 4-4-2, with Raman pushing far higher than his winger counterpart. Their two central midfielders generally stayed quite tight and compact, which made it easy for Gladbach to play around them down the channels, rather than drive through the centre. This was another disappointing performance from die Gelsenkirchen, but it did have its promising periods. 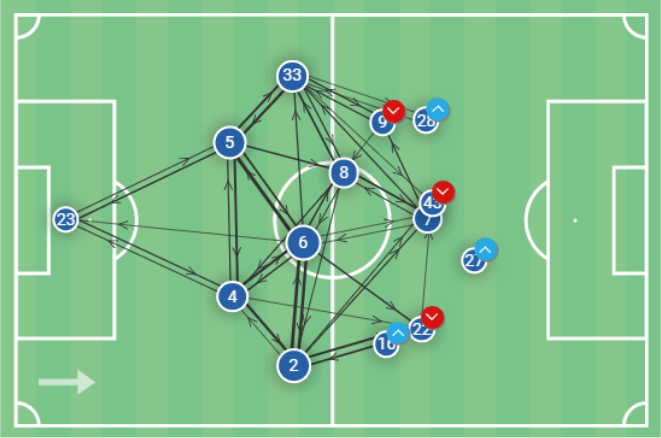 In conclusion, this was overall a domineering display from the home team, who will look to take this cohesive performance into their following fixtures. xG had this game down as 4.33-0.96 in favour of Gladbach, and their second-half display really cemented their victory here.

Although Schalke are relegation favourites this term, Gladbach should still come out of this game with renewed optimism. Generating 4.33 in xG is truly no mean feat, and their attacking endeavours here should be applauded. On another day, they could have put six or seven past these lot. Baum will take a handful of positives out of this game, but ultimately know that there is a metric ton of work to be done on the training pitch after this game.