Barcelona 2020/21: Fati and his role in Koeman’s system – scout report

The new 2020/21 LaLiga season is upon us and for Barcelona, it also marks the beginning of a new era. Ronald Koeman is the new Blaugrana coach and he hopes to propel the Catalans back ahead of Real Madrid, where they belong.

And while the campaign may still be young, a new hero is emerging from their ranks – Ansu Fati. The young La Masia prodigy has been a key figure in their fixtures so far and it really seems Koeman is getting the best out of him.

This tactical analysis will serve as a scout report on Fati and his role in Koeman’s system and tactics. The analysis will touch upon his main relationships on the pitch and the overall structure he’s playing in.

The role of a winger

Before dissecting Fati and his specific role in Barcelona’s new tactics, we have to explain what exactly is expected of a winger in a 4-2-3-1 system. With Koeman’s introduction, the Catalans abandoned their traditional 4-3-3 setup. Generally speaking, we can differentiate between two main types of wingers in such a setup: natural/ wide wingers or inverted wingers.

Koeman, as we already know from his previous stints, is a fan of the latter. Essentially, inverted wingers will be positioned on the opposite side of their strong foot so they can cut inside and advance through the half-space. While Fati is a mix of both versions, he has been used as an inverted winger so far.

In the build-up phase of a more general 4-2-3-1 system, the winger’s main connections are formed with his respective full-back and the ball-bear centre-midfielder. As the ball moves higher up the pitch, he can also connect with the attacking midfielder and the centre-forward, as can be seen below. 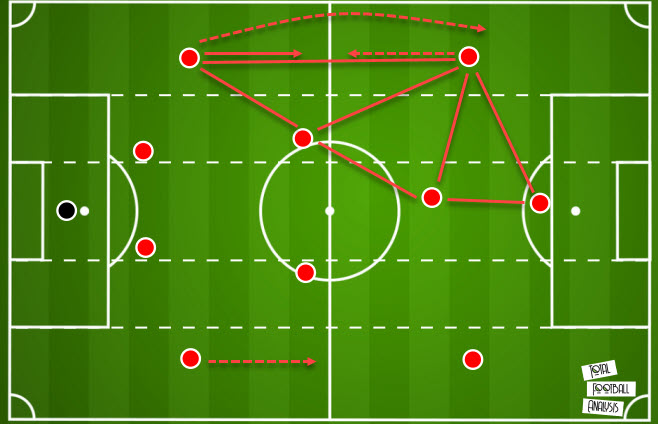 Of course, his main role lies higher up the pitch but by dropping deeper – mostly down to the centre of the pitch – the winger can help establish numerical superiority/ equality together with the double-pivot and help progress the ball.

But once the play is shifted towards the final third, the structure itself will change. And this is also where we start to see clear differences between the inverted and the natural wingers. The graph below depicts a general attacking setup of a 4-2-3-1 system that is approaching the box in an attacking formation.

We are focusing on the left-winger who has now inverted into his half-space and is advancing through that channel. 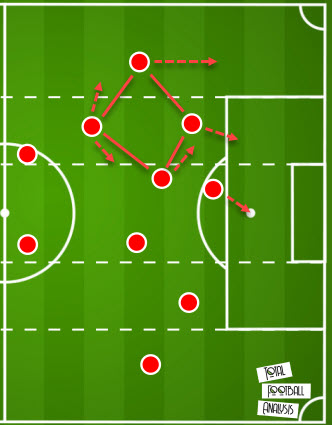 Notice the connections now. The full-back can fully overlap to occupy the flank while the attacking midfield shifts wide as well to achieve numerical superiority in case the opposition decides to drop both their winger and full-back to defend.

One of the defensive midfielders will often serve as cover and rest-defence in case the ball is lost. These four players form the basis of the attack down that flank and also represent the relationship that we will focus on in this tactical analysis.

There are several tasks a winger in a 4-2-3-1 formation has to do. One such task is keeping the width and playing with dynamism along the flank. This means constant movement and flexibility in their approach to boost the attack. The other task is obviously forming a good relationship with their respective full-back, either by letting them under or overlap.

When it comes to inverted wingers especially, they can often be found operating in-between the lines to receive the ball and then turn and progress it forward either through their runs or passes. Finally, they have to be able to make the runs not just into the final third but beyond the opposition’s backline.

Below, we can see Fati’s heatmap for the 2020/21 season and a pass map from one of Barcelona’s recent LaLiga games.

This will tell us something more about whether the youngster performs those tasks and more importantly, how he moves across the pitch. We can see that he takes a wider positioning in the build-up phase, often dropping deeper to receive the ball.

Once that happens and he starts running with it towards the final third, he will generally cut inside and let his full-back (Jordi Alba) overlap. We can see that sort of movement in the following example which can confirm what the heatmap has shown us.

Above, we can see Fati cutting inside once he enters the final third, advancing through the half-space to attack the box and letting one of his teammates overlap and provide the width instead.

One other tendency we see is getting more central in deeper areas and this is mostly when he’s receiving the ball. Notice down below such an instance. Sergio Busquets is on the ball and Fati steps inside to open a passing channel so that the ball can be progressed. 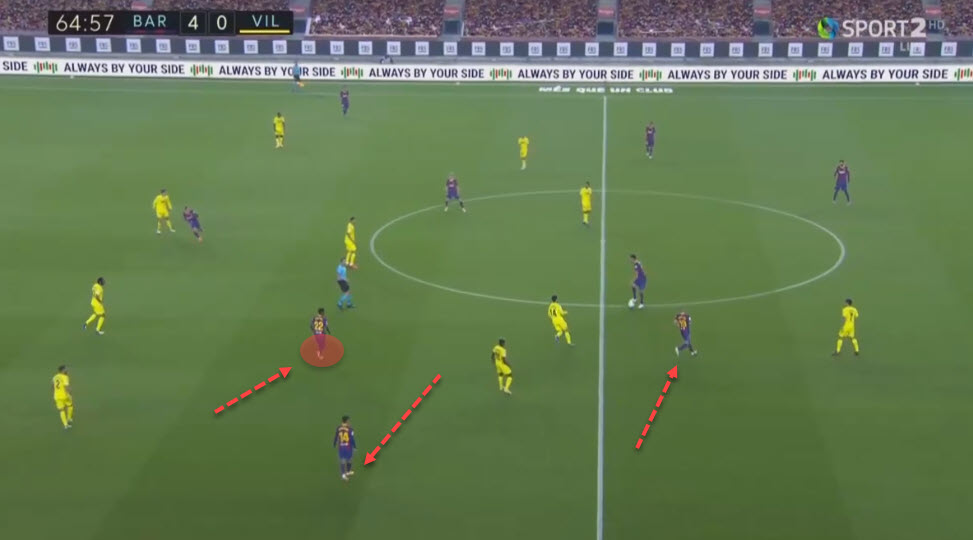 In this instance, Alba has also cut inside to help the midfield not get overloaded and Philippe Coutinho drifts wide to replace Fati. This is indeed something that we’ve seen Barcelona attempt multiple times so far.

Down below is another example of essentially the same thing with a slight variation. Once again the ball is with Busquets as the Catalans aim to progress up the pitch. This time, both Frenkie de Jong and Coutinho are also nearby so Alba can burst forward.

Fati, on the other hand, cuts inside to link-up and help with the build-up into the final third.

Both of those examples clearly show him perform multiple tasks we’ve mentioned earlier. He is moving in-between the lines to receive in dangerous positions, combining with his full-back by letting him overlap and is playing with dynamism by being versatile and on the move at all times.

Now let’s cast our gaze back to the initial pass map which will tell us more about Fati’s relationships on the pitch. Looking at the graph, we can see him creating a relationship with three main teammates: Coutinho, De Jong, and Alba. Of course, Lionel Messi is also among them but the other three are currently more relevant for our tactical analysis.

Fati’s connections on the pitch

We have previously mentioned how in the attacking phase, the winger in a 4-2-3-1 will often create connections with his respective full-back, one of the pivots, and the attacking midfielder. It is interesting to note how Koeman’s system is indeed respecting that structure.

As we now know, Fati’s biggest connections are usually formed with Alba, Coutinho, and De Jong. Looking at the pass map, we can see how they either form a diamond or a triangle on the pitch, depending on the phase of the attack. 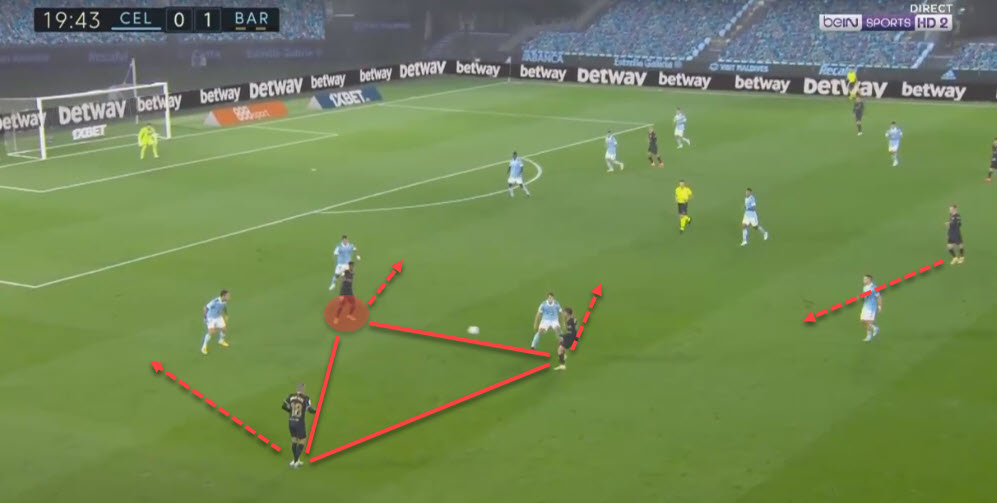 Notice the more general setup this creates in most situations. Fati is positioned in the half-space, Alba is about to overlap and Coutinho is connecting with the youngster and then moving more centrally and towards the zone 14.

De Jong, in this instance, is not yet in his position but once Alba enters the final third, the Dutchman will shift wide to provide cover behind the attackers. The situation is similar as Barcelona advance up the pitch.

We’ve mentioned how Koeman wants his forward line to be flexible and one of the winger’s tasks is to stay active and dynamic. In the example below, Fati has continued progressing centrally, arriving in zone 14 and he immediately swaps places with Coutinho.

Alba, as per usual, is overlapping here as well. This confuses Celta Vigo’s backline and forces a defender to face Fati, leaving Coutinho isolated 1v1 and potentially creating an overload once the full-back gets there.

Both De Jong and Busquets are further back and form Barcelona’s rest-defence. But speaking of these overloads, the 4-2-3-1 is extremely proficient at creating them across the pitch, especially out wide.

Fat’s role can be either to create one himself by combining with either Alba or Coutinho or he drags the markers away and lets his teammates enjoy numerical superiority. This can be seen in the image down below. 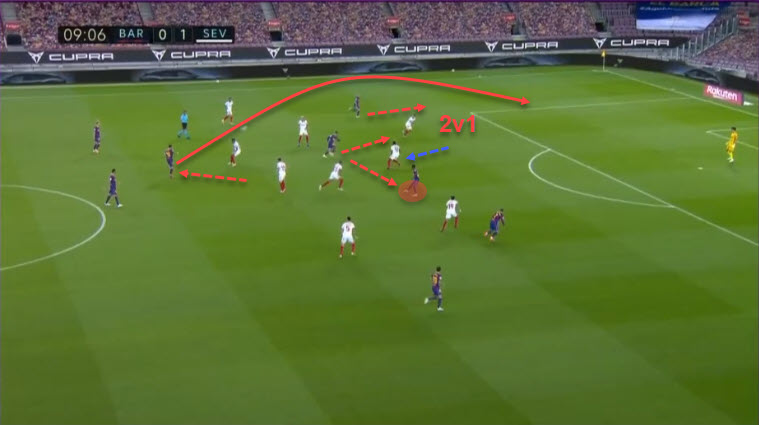 Since the young La Masia prodigy is usually inverting centrally, this means Coutinho often takes his place on the flank when they’re in and around the box. In this case, this type of movement has dragged Sevilla’s defender deeper and isolated their full-back against two Barcelona attackers.

Messi sees the opportunity and sends a lofted ball towards the free space behind their backs. This is the type of dynamic movement and interplay we’ve mentioned earlier in the tactical analysis.

The final aspect we’re going to dissect will be the goal-threat.

Fati in front of goal

Needless to say, the young winger has been the most important attacking piece of Koeman’s jigsaw so far. When it comes to his movement and preferences in and around the box, nothing much has changed in the tactical sense.

Fati has the instinct of a no.9 and could easily slot into that position as well. Below, we can see both his shot and dribble maps. They can provide us with insightful information.

Firstly, looking at the image on the left, we see the main positions from which the youngster likes to shoot. Mostly, he will take his shots inside the box when arriving from that left half-space. Seeing how this is usually how he loves to advance, it doesn’t come as a big surprise.

This is then confirmed by the graph on the right side which shows his dribbles. Notice the dribbles that have ended in a goal for the youngster. Most of them begin in the left half-space and then once he enters the box, he lets loose.

We’ll examine that kind of movement while deconstructing the goal against Celta Vigo below.

Once again, I’ve highlighted Fati and his three main connections to see the movement and the relationship before scoring the goal. Coutinho in zone 14, Fati advancing through the half-space and moving centrally, Alba drifts back wide to stretch the backline and De Jong is providing the cover.

Coutinho is the first to receive the ball and he turns and passes it over to Fati who lets it roll over his body and onto his left foot. He then tricks the defender by bursting into the box past him.

The action, of course, ends with the ball in the home team’s net. But seeing Fati inside the box and actually being one of Barcelona’s biggest threats is something new. Sure, we’ve already seen glimpses of that potential before but now he’s breaking out of the shell altogether.

Our final graph below will show us the Catalans’ biggest presences inside the box by measuring touches in the box per 90 and shots per 90. Additionally, I’ve included the xContribution per 90 as well, which is essentially expected goals (xG) and expected assists (xA) per 90 put together. 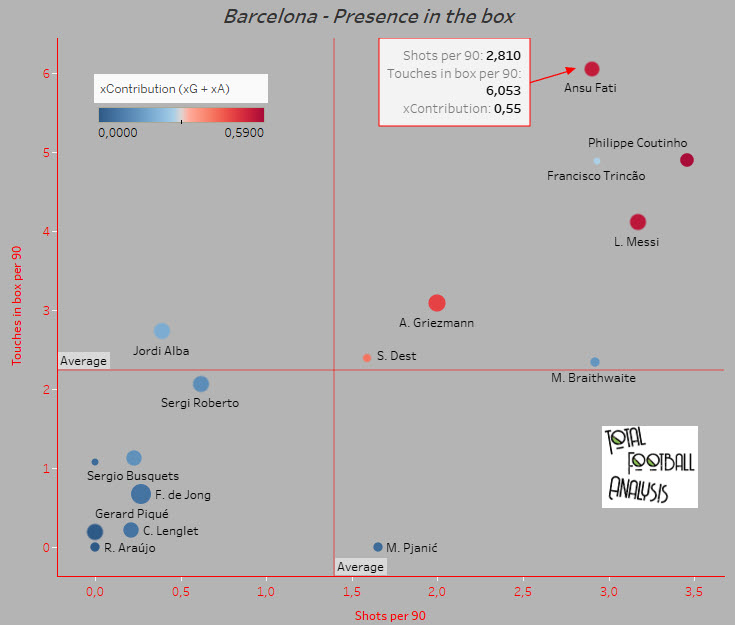 A slight caveat to all of that is, of course, a rather small sample in 2020/21. However, Fati averages 6.053 touches in the box per 90 so far, more than any other player in the team and has registered Barcelona’s third-biggest xContribution as well.

Likewise, of the players with similar game time, only Messi and Coutinho shoot more often than the young winger.

Fati hasn’t changed that much as a player from 2019/20 to 2020/21. However, he does look more mature and crucial to Koeman’s tactics, which you can hopefully better understand after reading this tactical analysis.

This scout report outlined the 17-year-old’s main roles in the new Barcelona system, looking at his relationships, tasks, and connections on the pitch.

Next up: De Jong. Stay tuned.