This Championship season is no different with several highly talented young players and their exodus to the Premier League has already started with Fabio Carvalho all but certain to join Liverpool. Another one of those young players who could well be making the step up to Premier League football is Welsh youngster Brennan Johnson. Johnson has been an integral part of Steve Cooper’s revival of Nottingham Forest and has recently been announced the EFL Championship’s young player of the year, an award previously won by Olise and Jude Bellingham. He is currently being linked with Newcastle United, Leeds United and Brentford however if Nottingham Forest manages to achieve promotion signing Johnson will become much harder.

This tactical analysis and scout report will take a deeper look into Johnson’s game and some of the key attributes which have allowed him to win the EFL Championship young player of the season and identify any potential areas he may need to improve upon.

Johnson can best be described as a complete forward playing as part of a striker partnership in Nottingham Forest’s 3-4-1-2 tactic. Now Johnson has a wide skill range that allows him to be deployed in a number of different roles including as a number 10 or as a winger, that’s not to say they are his best positions, but he does have the skillset to play there. As part of his role as a striker, Johnson does love to drift wide and occupy space on the wide right. With Nottingham Forrest playing without conventional wide men, it allows for Johnson to drift wide into these areas. Despite being comfortable in wide areas, Johnson is as comfortable playing more centrally and playing like a more traditional striker. Johnson’s tendency to drift wide can be reinforced by looking at his heatmap. 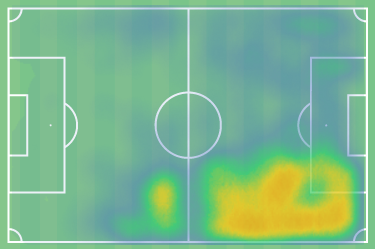 Johnson displays blistering speed and acceleration to get away from defenders both on and off the ball, which also makes him a real asset in attacking transition situations for Nottingham Forest. He also demonstrates great link-up play which will be discussed further in this analysis.

Whenever scouting a player in the modern game addressing the player’s performance in terms of data is now an important aspect. This analysis of Brennan Johnson will be no different, we will look at some metrics to compare Johnson’s performance against other attackers in the EFL Championship with over 2000 minutes this season in the league. 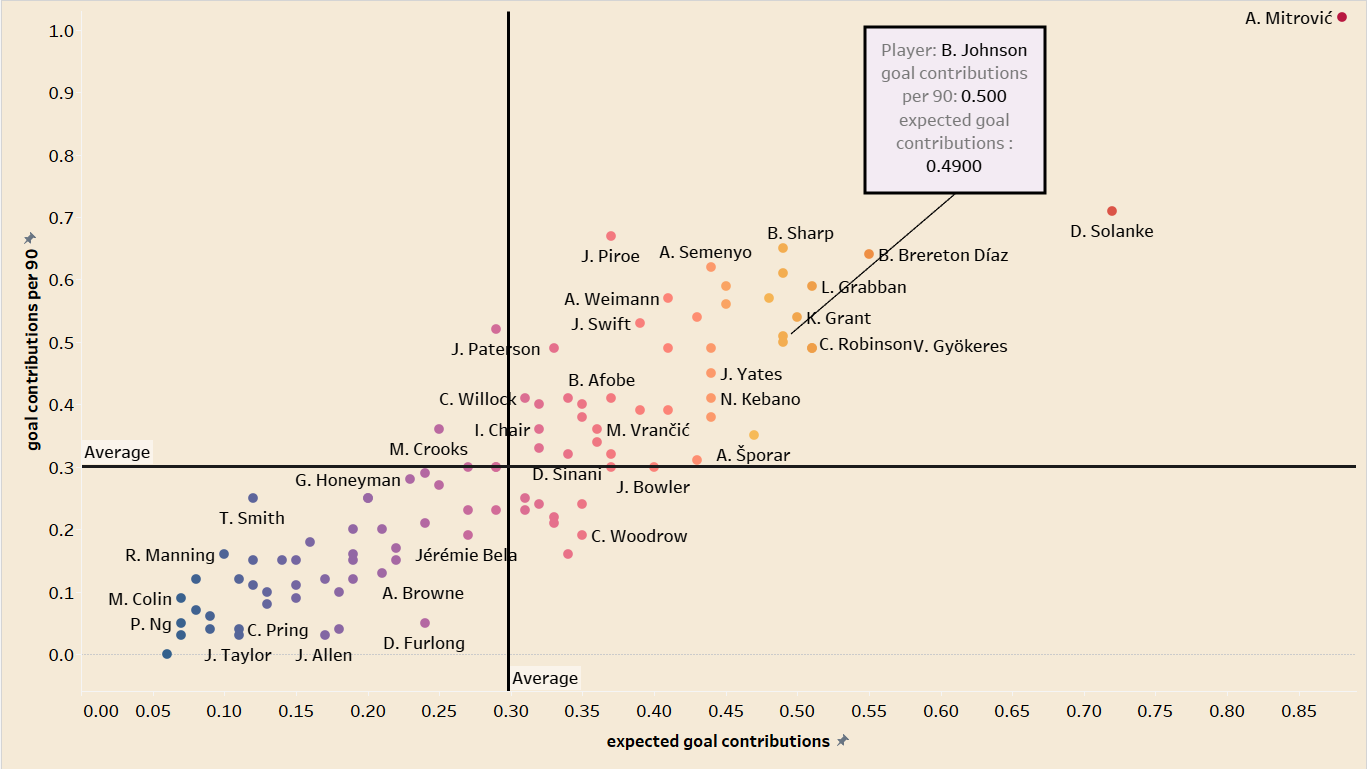 This season Johnson has managed 0.33 goals per 90 from an XG per 90 of 0.26 in addition to 0.17 assists per 90 from an XA per of 0.23, managing to outperform in terms of goal scoring, however, hasn’t recorded the number of assists his chances deserve.  There is the potential for Johnson’s goal-scoring to decline next season as he is outperforming his XG, it is also worth noting this does include penalties that Johnson has taken at times this season. 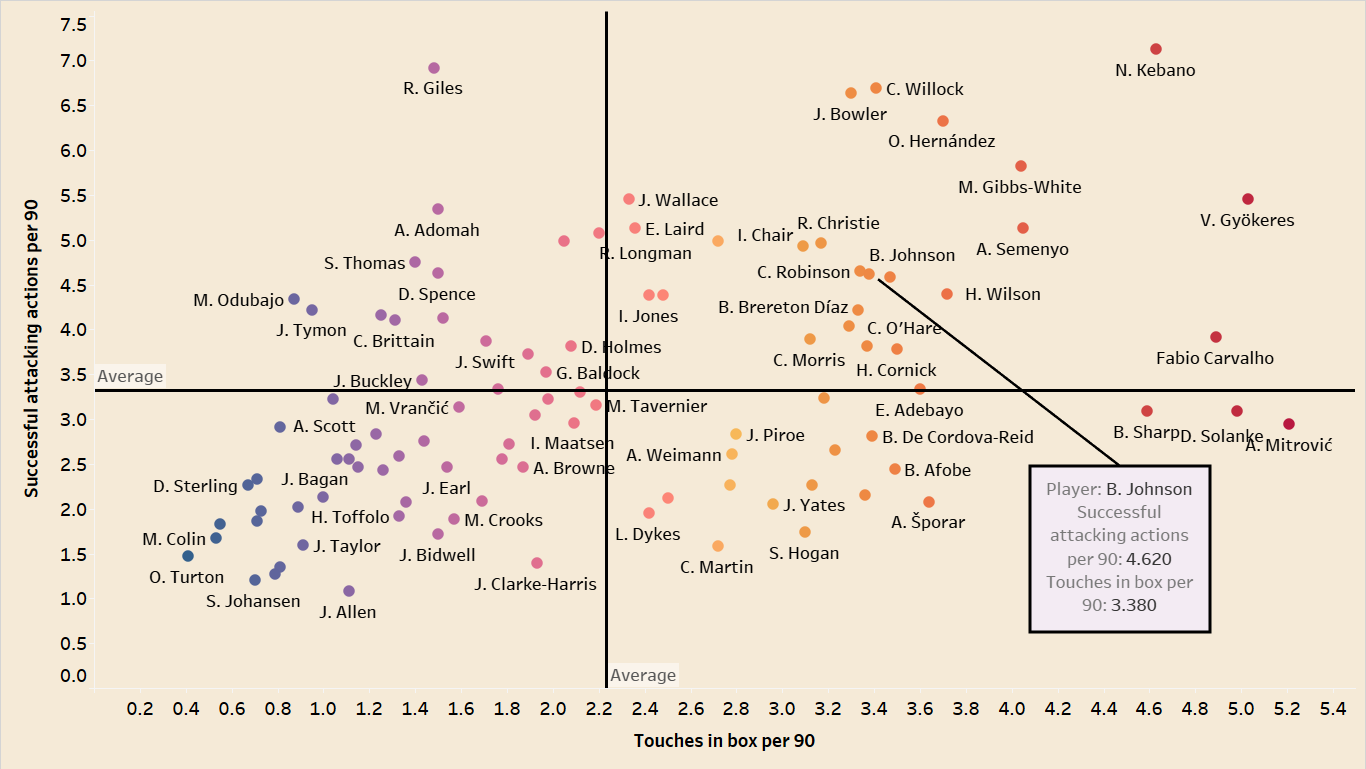 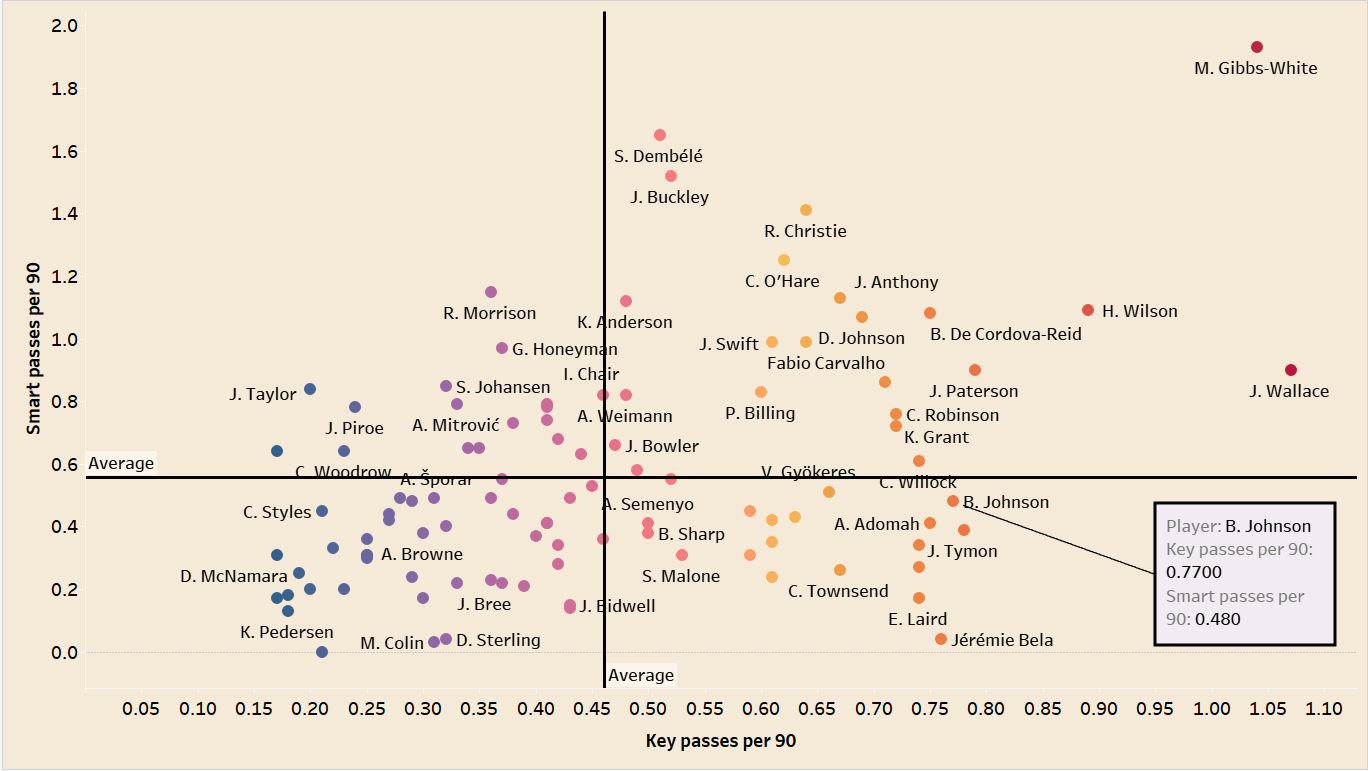 A key pass is a pass that directly creates a goal-scoring opportunity for their team, a smart pass is a that looks to penetrate the opposition’s defensive line.  Johnson ranks below average in smart passes per 90 with only 0.4 per 90, however, he does compensate for this with 0.77 key passes per 90 and is one of the best performers in the league in this metric.

From these metrics, we can get a better understanding of Johnson and the attacking quality he brings to Nottingham Forest in terms of goal scoring but also his all-around play and chance creation.

So far in this analysis, we have alluded to the fact that Brennan Johnson has a tendency to drift out wide, usually to the right-hand side. With him drifting from a central area it makes it harder to track him but also plays to Johnson’s skill set with his great dribbling and excellent speed. When in these areas Johnson can produce quality delivery and service for his teammates in the box and is the main source of his assists and key passes this season. Below we will take a look at a couple of examples.

The first example comes against Peterborough, as you can see below Nottingham Forest are on the counterattack the ball has been played into the path of Johnson by a teammate. 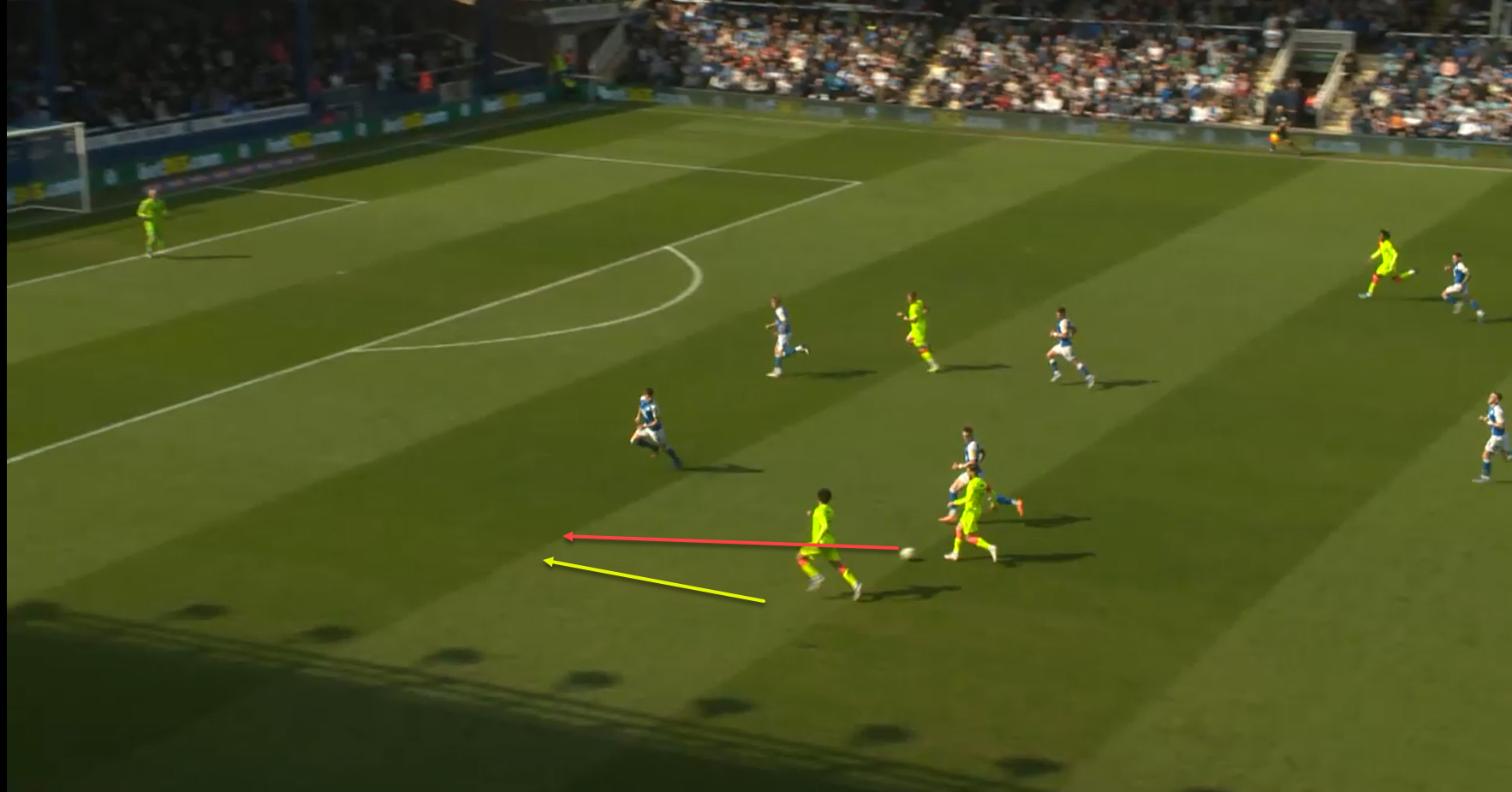 He gathers the easy ball and advances the ball closer to the goal. Now Johnson doesn’t have an easy option available, so he has to play a clipped pass to the back post.

Johnson puts a brilliantly placed and weighted ball in for Surridge who heads home to give Nottingham Forest the lead.

The next example again showcases Johnson’s quality when he finds himself in those wide areas. This time the ball has fallen to Jack Colback, and Johnson finds himself on the left-hand side. Colback plays a ball to the edge of the opposition box for Johnson to run onto.

Johnson gathers the ball and with his left foot, whips a great ball across the 6-yard box, evading the opposition goalkeeper and putting it on a plate for Ryan Yates.

Both these examples show the composure and quality Johnson possesses when he finds himself in wide areas and his ability to create chances for his teammates with precise and well-weighted deliveries.

Johnson has a wide variety of skills and attributes which help make him such a complete player but arguably his most important is his ability to score goals and the instincts he shows to get himself amongst the goals. As you can see from the below-shot map, all Johnson’s goals have come from inside the box. We did mention earlier in the data analysis, that Johnson was outperforming his XG but with few goals from outside the box this could well be down to good finishing rather than luck. 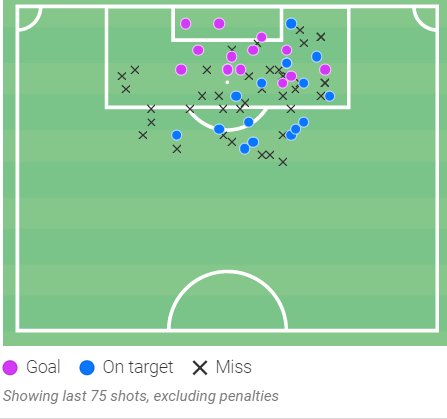 Below we will take a look at one of Johnson’s goals that demonstrate an instinct and desire to score goals. In this example, the ball is switched out to the left side and Johnson is positioned outside the opposition left-back. As the ball reaches Lowe at left-wing back, Johnson comes alive and swiftly gets between the opposition left-back and centre back and is ready to exploit the space behind.

Many players in that position would stay wide but Johnson shows that desire to get himself amongst the goals. Johnson also manages to time his run perfectly, staying onside but also manages to get to the ball before the opposition defender.

Johnson meets the ball in the highlighted space and manages to coolly power home for Nottingham Forest.

Off the ball work rate

The final aspect of Johnson’s game we will touch upon in this scout report is his work rate off the ball. Johnson has a knack and ability to hassle defenders and create turnovers high up the field which can sometimes lead to chances for his team. This can be reflected in the data with Johnson making 2.84 recoveries in the opposition half per 90. Below showcases a great example of Johnson working hard off the ball to create a chance for his team.

The ball has been cleared in the air after the Nottingham Forest set-piece, the ball is going to be brought down and controlled by the highlighted West Brom player. Johnson identifies this as an opportunity to potentially turn the ball over high up the field.

After the ball is brought down, Johnson harries the West Brom player and eventually makes a block of the attempted clearance, shown below.

Johnson manages to retrieve the ball after the block and put a dangerous cross in the box which was just cleared for another corner. This is one of a few examples where Johnson closes down defenders and creates turnovers in dangerous positions for the team.

Hopefully, this analysis has given you a better insight into the emerging talent that is Brennan Johnson, a player we will most likely see in the Premier League next season either with a new club or with Nottingham Forrest. His positional versatility and wide array of skills will be attractive to several clubs, in addition to his ability to produce in the final third with goals and assists. If Brennan Johnson continues his progression he could establish himself as a good Premier League player and follow the likes of Michael Olise and Jarrod Bowen.