On Easter Monday, Steve Cooper’s Nottingham Forest hosted Steve Bruce’s West Bromwich Albion side. A win would be crucial for each side. Forest needed the three points to sustain their push for a playoff place this Championship season. In their most recent game, Forest lost to Luton in a big blow for their hopes of promotion to the Premier League. Therefore, Forest needed to bounce back with a win. West Brom needed a win to be in contention for the playoff places as they were six points behind sixth-place Sheffield United.

Forest would end up as winners in a 4-0 destruction of West Brom.

West Brom’s zonal marking, Darnell Furlong’s poor game and an excellent team Forest performance made it impossible for the Baggies to achieve any sense of control in the game.

This article features the tactical analysis of the game and discusses the tactics used by both teams and how Forest dominated West Brom.

Steve Cooper made two changes from Forest’s loss to Luton Town on Good Friday. Lewis Grabban had an illness that left him unavailable, and Aston Villa loanee Keinan Davis is out for the rest of the season due to a hamstring injury. Forest replaced Grabban and Davis with Philip Zinckernagel and Sam Surridge. 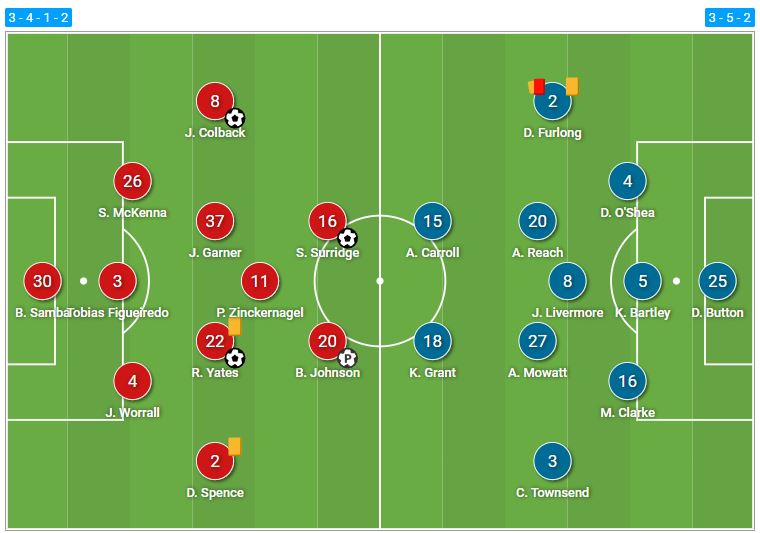 Throughout the match, Forest pressed high up the pitch. Brennan Johnson and Sam Surridge were harassing the West Brom backline from the first minute. This pressure left West Brom with a much more arduous task of playing out from the back.

One example of Forest’s pressing was just 12 seconds into the game. Johnson triggers the press by sprinting towards Matthew Clarke. Zinckernagel and Surridge both position themselves into positions where Clarke could not pass the ball. Because of the pressure from Johnson, Clarke has to clear the ball, and Worrall wins possession back. 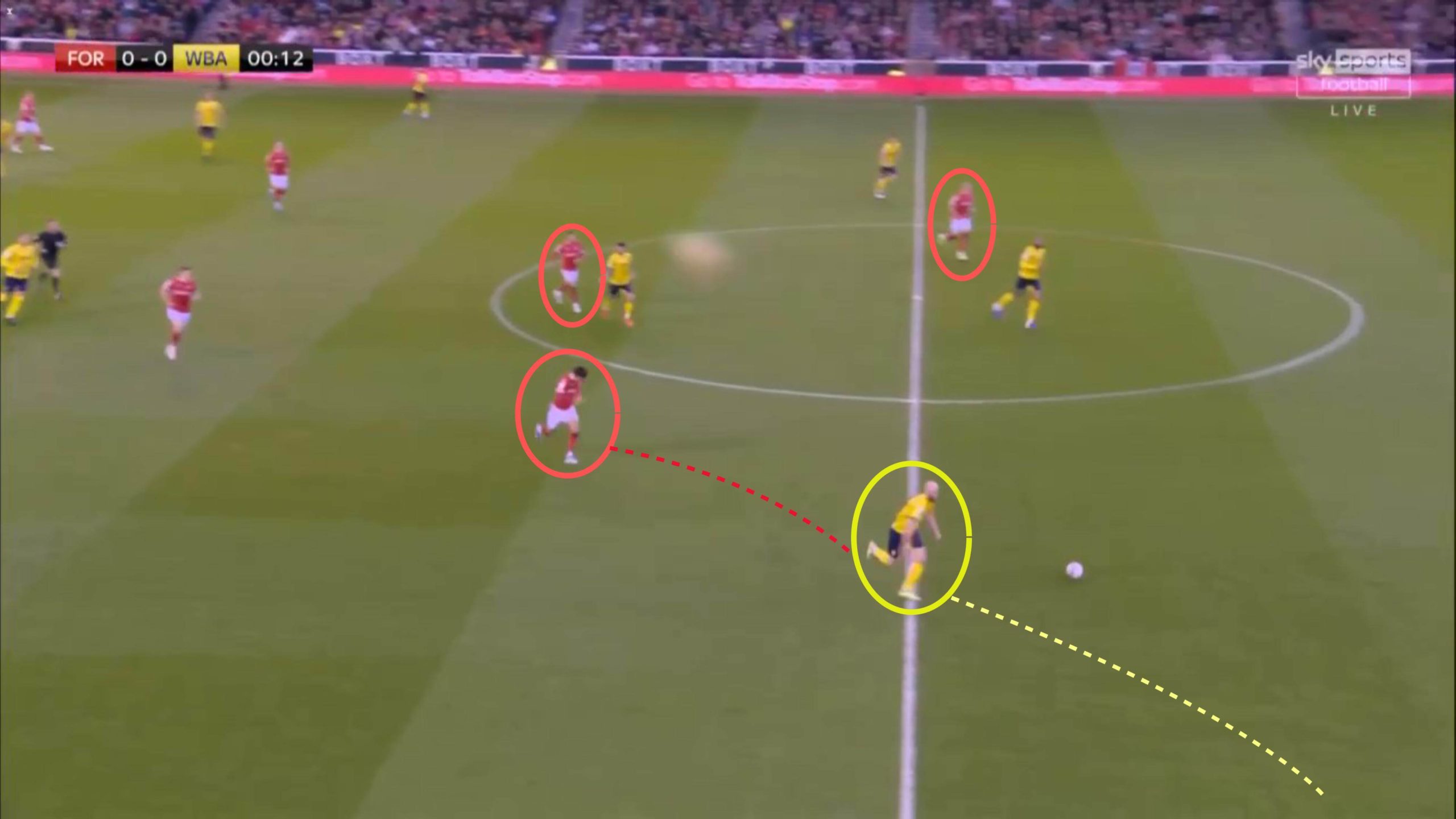 Another time that Forest stifled West Brom’s passing was in the 14th minute. This time, Surridge takes the role of the presser. Surridge’s run is arched so that David Button cannot pass the ball to Dara O’Shea or Kyle Bartley, and Johnson is ready to pounce if Button passes it to Bartley or Clarke. Surridge and Johnson’s positions left Button with no option other than punt the ball forward. 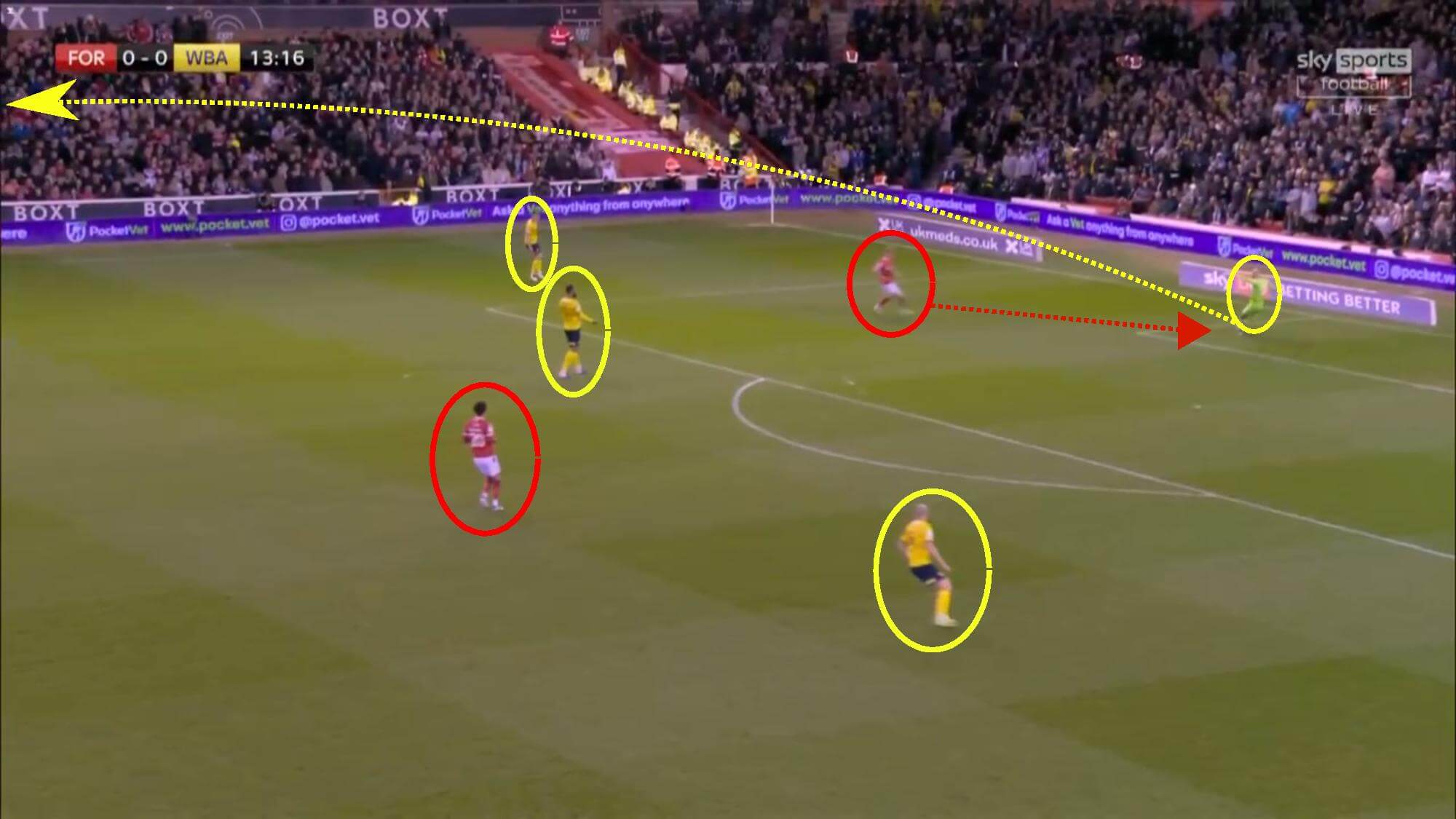 The pressing of Button did not let up throughout the whole game. Even when Forest were two goals in the good, Johnson was still pressing the goalkeeper with the help of Surridge and Zinckernagel. Again, Button cannot pass the ball short to anyone without the receiver being pressed intensely by the two forwards waiting. Button must then kick the ball long and lose the ball. 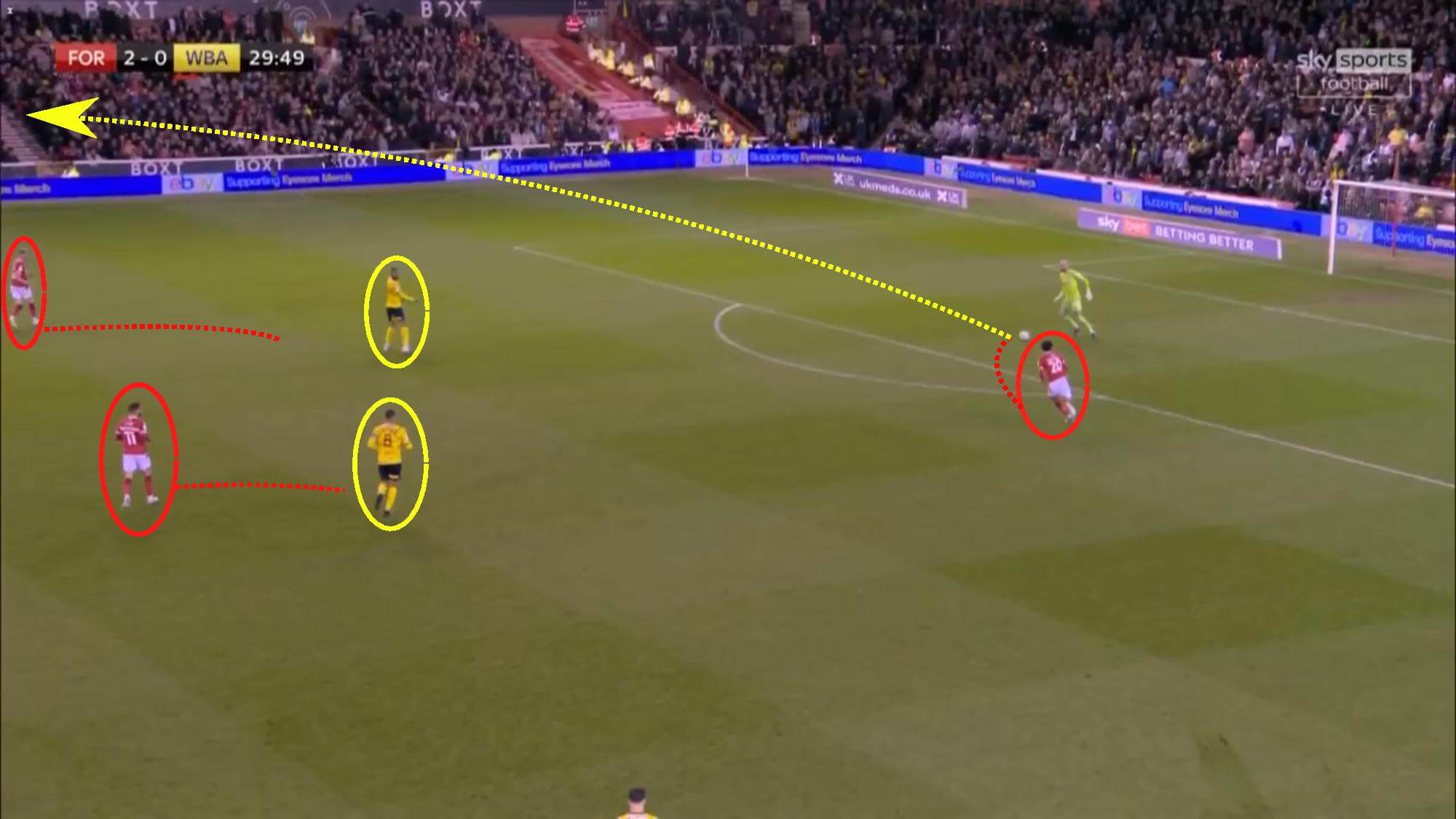 The result of this pressing was that Button could not play out from the back, and he had to launch the ball towards former Liverpool striker Andy Carroll. These long balls meant that West Brom couldn’t keep the ball shown in them having just 30% possession.

The first yellow card came from Furlong being wrong-footed by Zinckernagel. Instead of letting the Dane run past him and let the players behind him help, Furlong sticks a leg out lazily. If Zinckernagel were in a more central position, it would make sense for Furlong to take the Dane down. But, Zinckernagel was on the wing and in a low danger area of the pitch. Furlong also had O’Shea, who would have helped him to stop Zinckernagel. 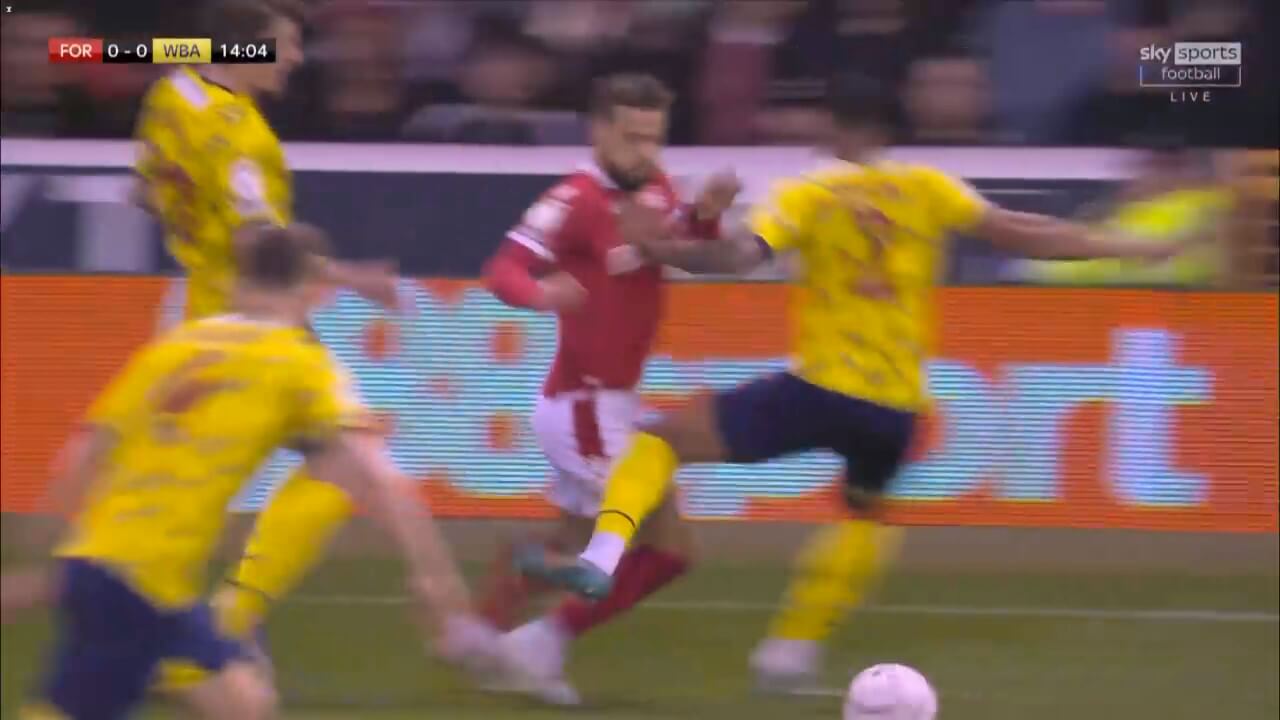 Next, Furlong ends up on the floor after tackling Zinckernagel in the box. Furlong then raises his arm in the air to block the shot. Again, Furlong does not need to do this. He knows that he has to be careful due to his previous yellow card, but he leaves the referee with no choice. If Furlong were aware of his defence, he would know that O’Shea was covering him, and he would have blocked the shot. Furlong received his second yellow card, and Forest would go on to score the resulting penalty. 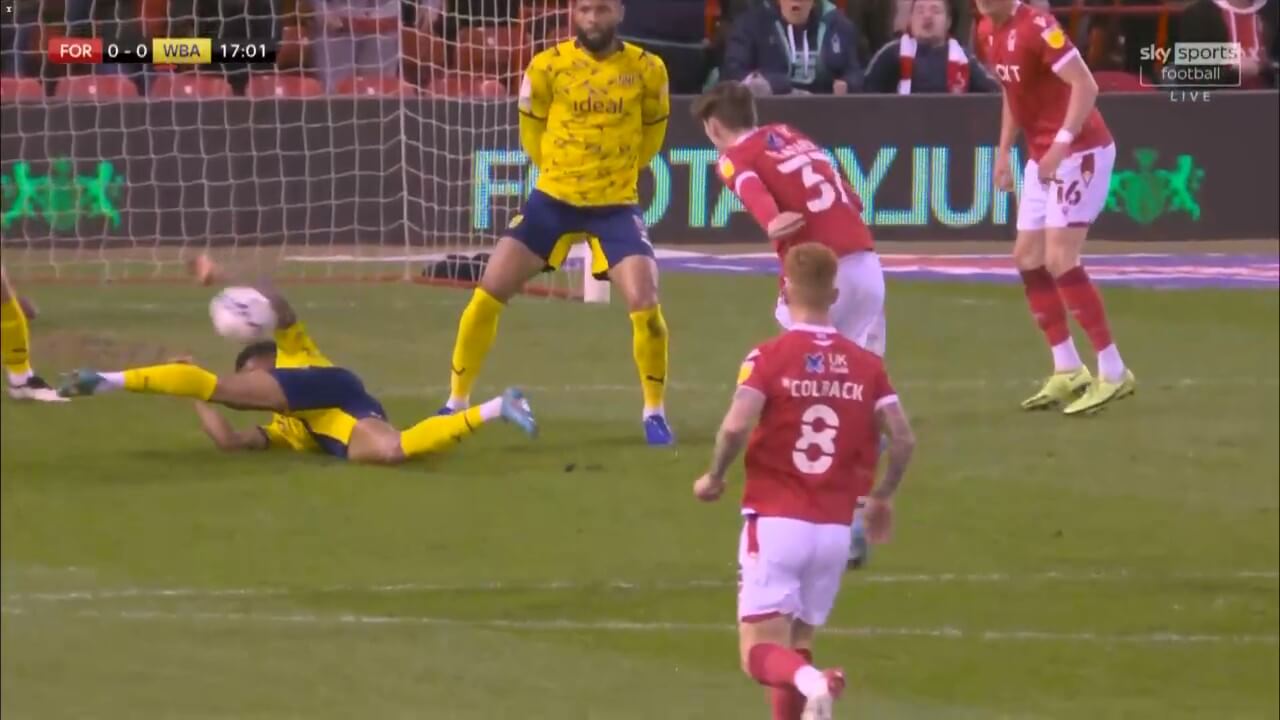 West Brom implemented a partial zonal marking system for their corners against Forest. As we can see for Forest’s second goal, West Brom had a total of six players who were not marking an individual in the box. This led to Yates having the run on the West Brom defence and getting the jump on Bartley. There was no pressure on Yates because of the zonal marking. If it had been man-to-man marking, Yates would have more difficulty getting that much space close to the goal. 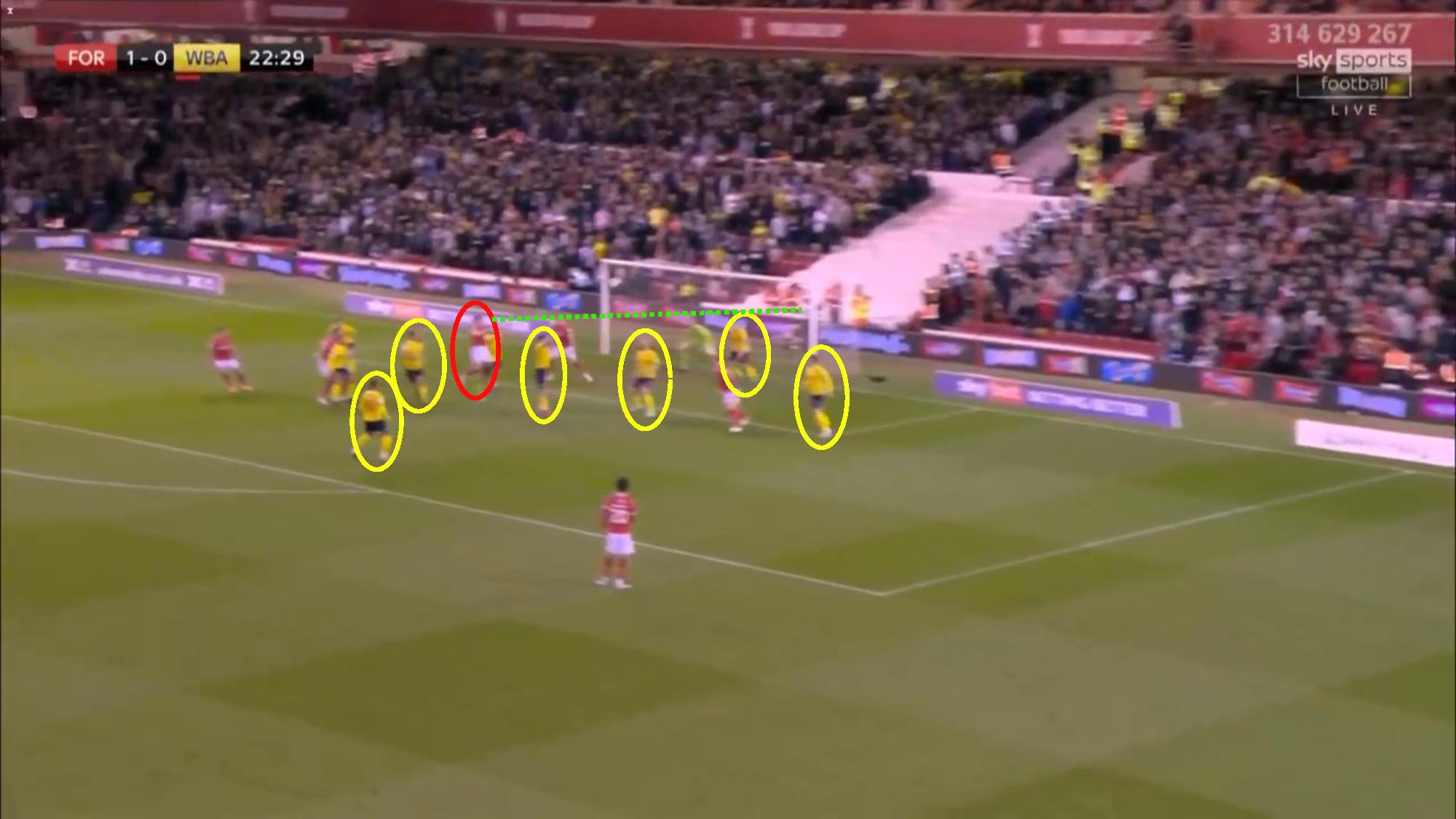 This was a tactic implemented by Steve Bruce throughout this game. As we can see here, West Brom have five players not responsible for a single player. Instead, they are marking the space in the six-yard box. Forest did not cross the ball into the box this time, but it could have caused problems if they did. 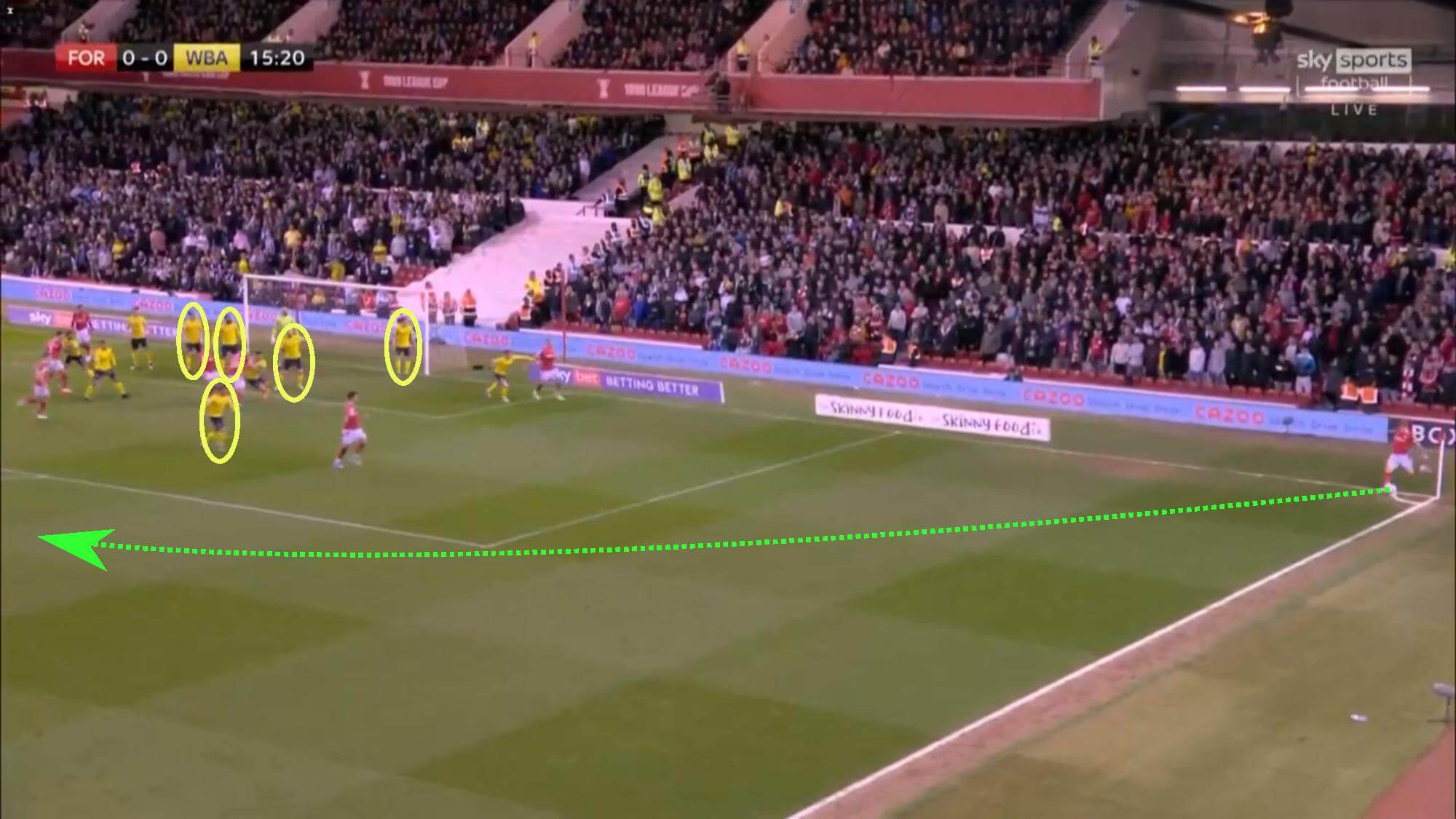 After the red card, West Brom struggled to attack Forest. But, when Bruce’s team did attack, they did so mainly down the left-wing. This was because of the space that Forest wing-back Djed Spence left behind him when pressing/attacking. Spence is known as a defender who likes to get forward, and that did not change against West Brom.

Looking at his heatmap against West Brom, we see that Spence was getting forward and pressing high up the pitch. 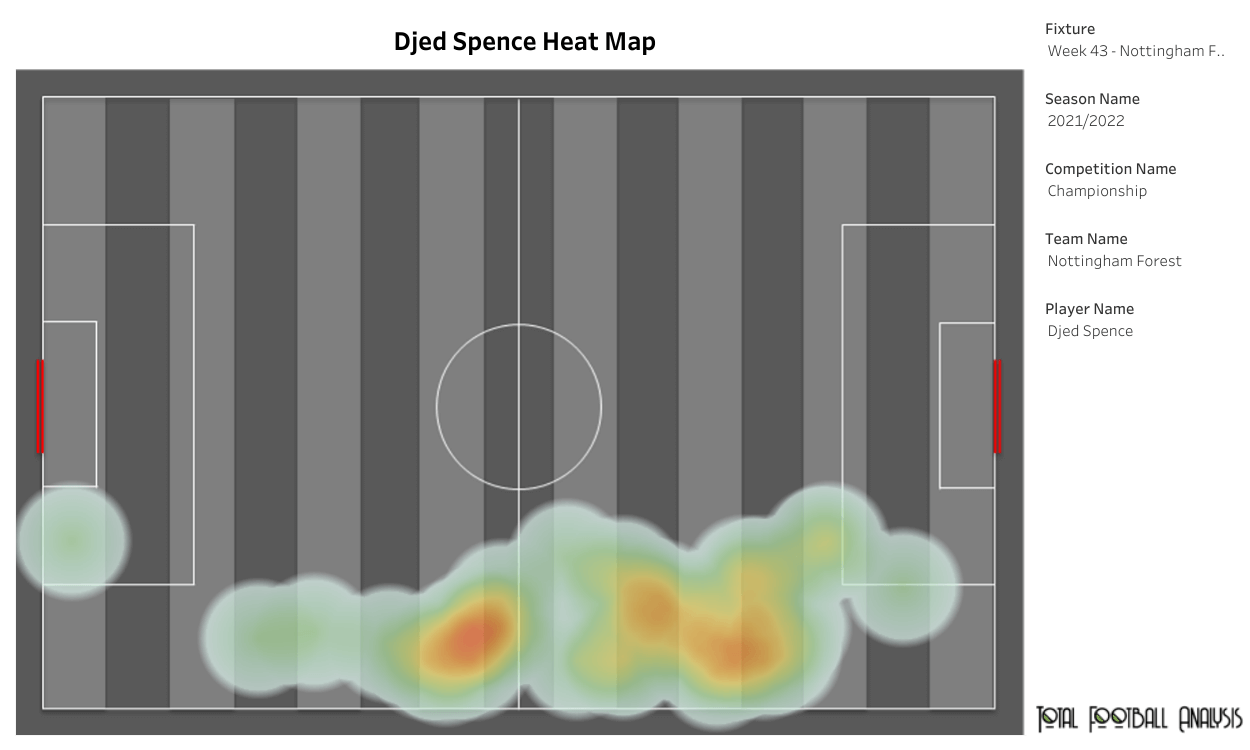 It is reasonable to expect Spence to bomb down the right-hand side as he is a fantastic wing-back. Spence has completed the most dribbles out of any defender in the Championship this season. He uses his pace and technical ability to manoeuvre around defenders easily. 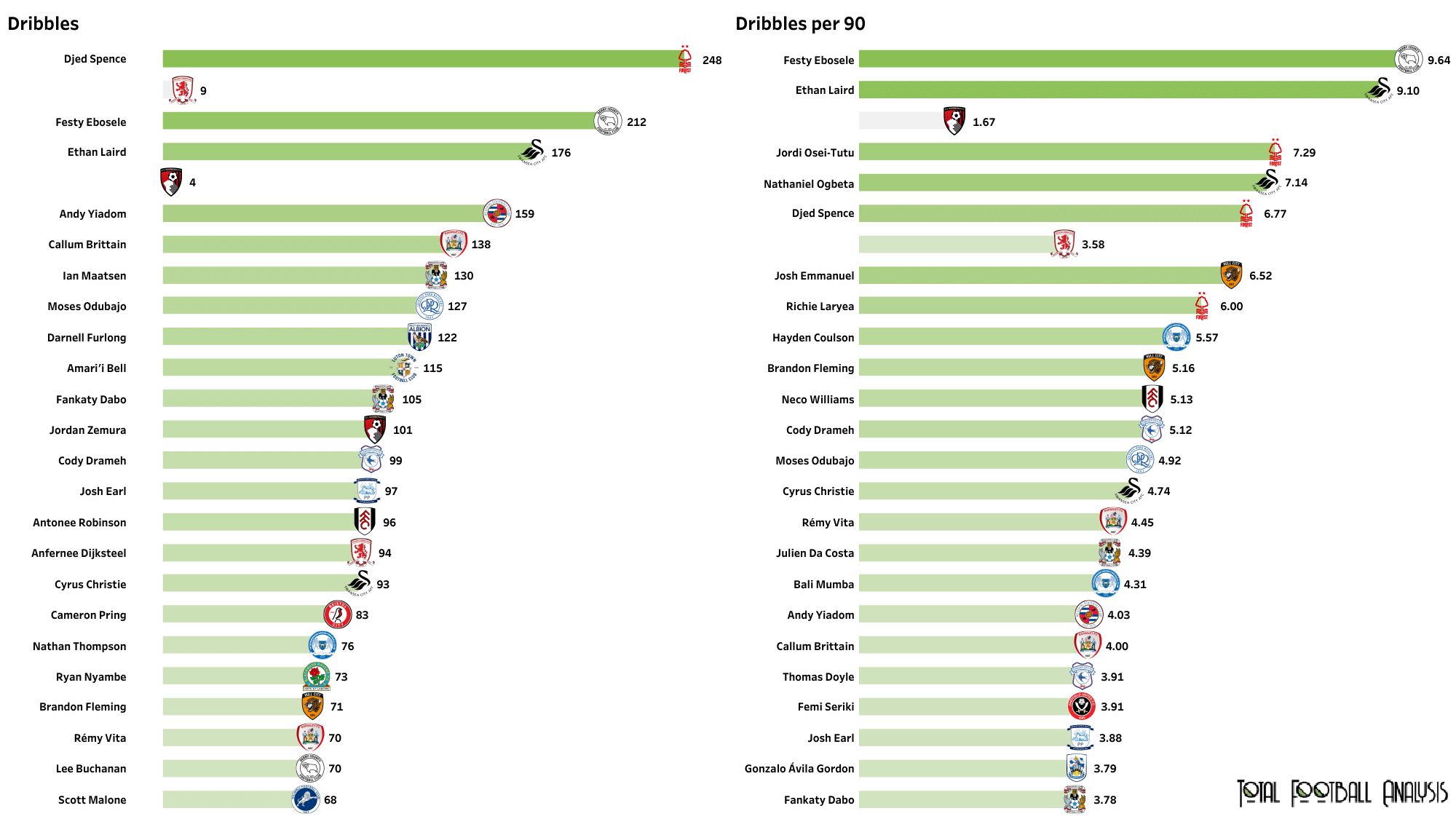 Looking specifically at the match, there were a few times when Spence may have been a little too adventurous. For example, Spence is left entirely out of position after attempting to start the press, and Adam Reach then exploits this space. 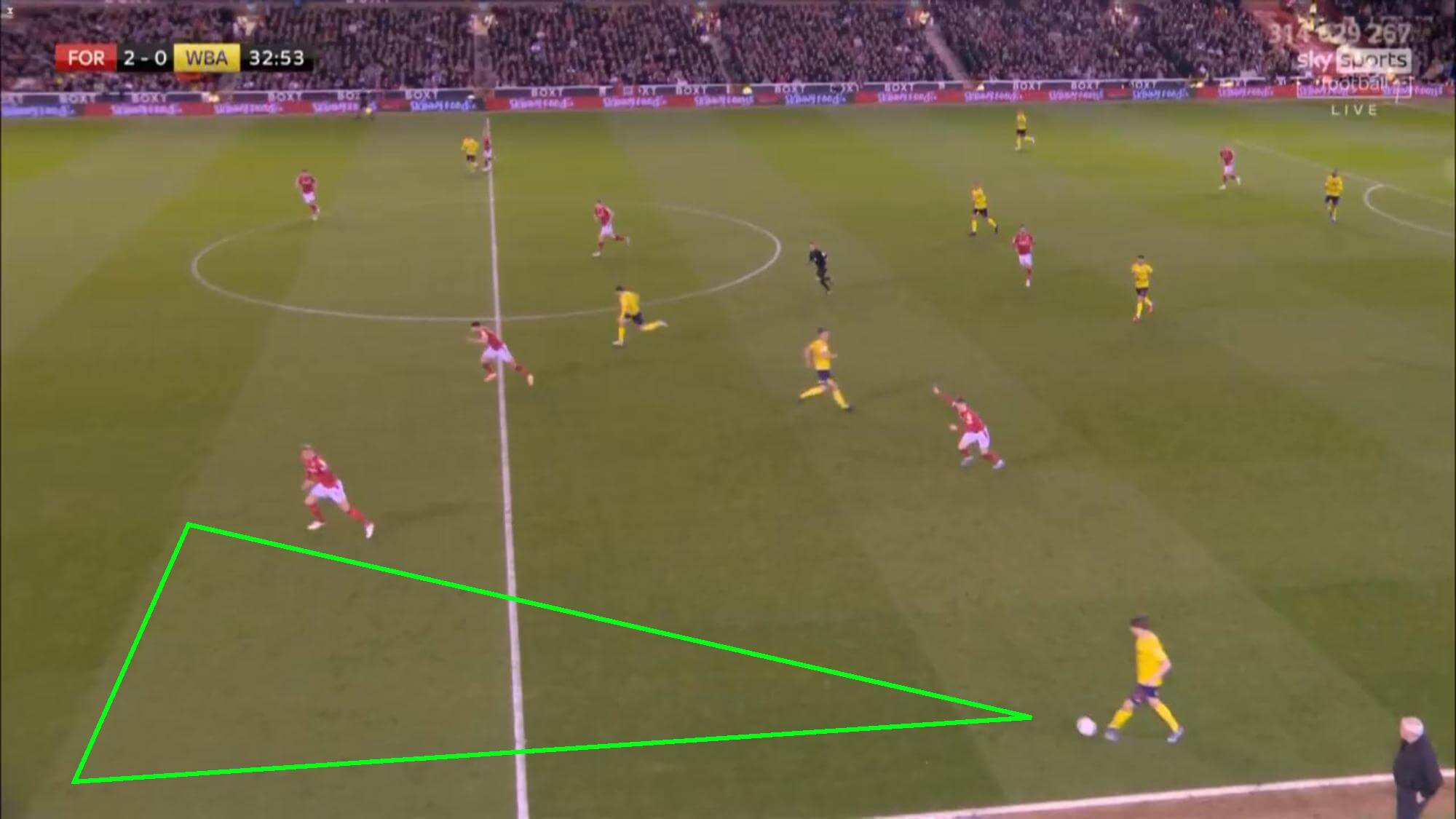 West Brom attacked down the left wing often throughout the match. When you are three goals in the good, concentration levels will lower, and it showed here. Despite starting as a central striker and being the only forward on the pitch for West Brom, Carroll found himself trying to run the channel as he recognised that Spence was leaving space throughout the game. 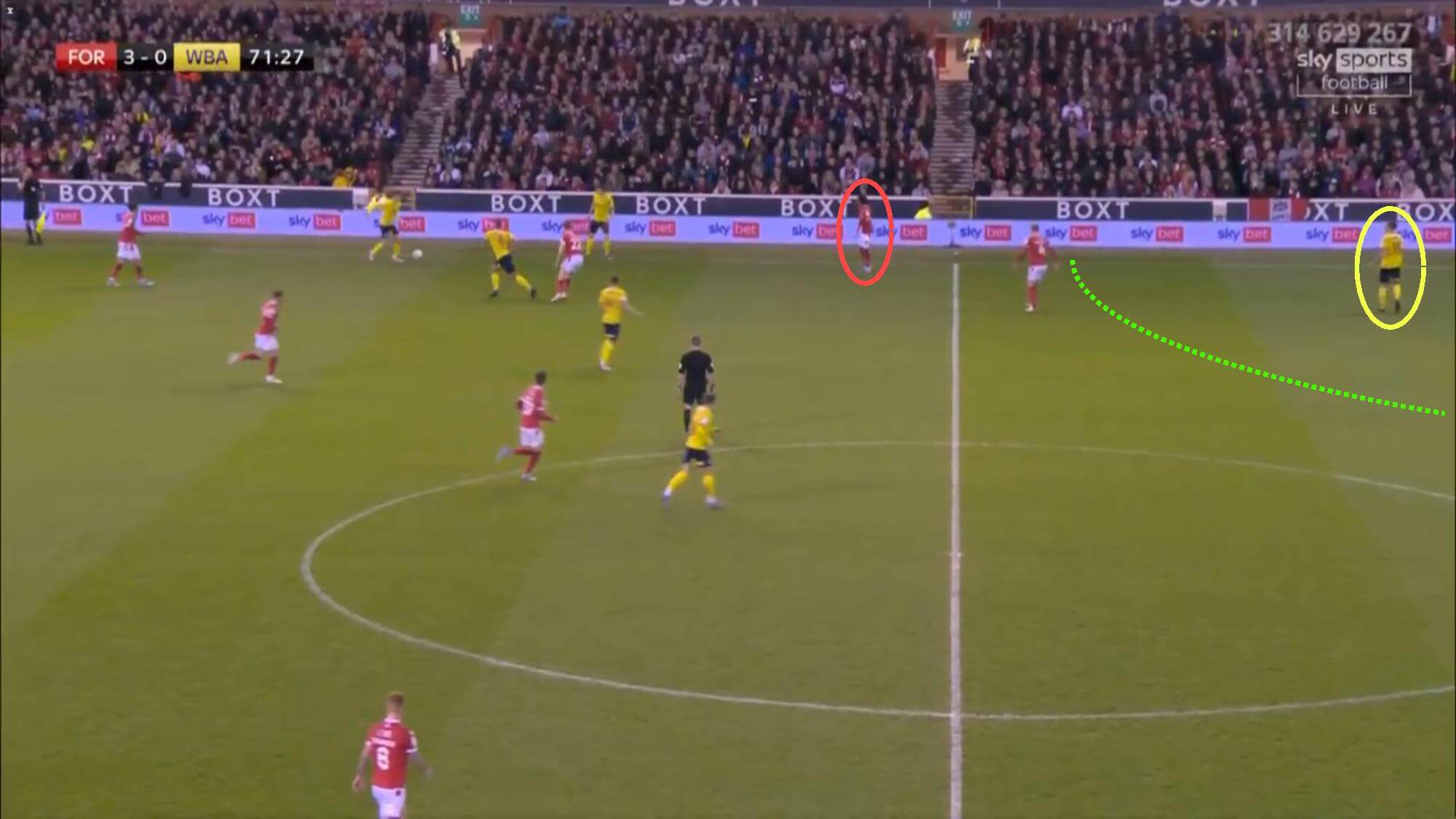 Despite his lack of defensive awareness, Spence did have a good game and produced some great crosses throughout the game, including a low-driven cross that eventually caused Furlong to concede a penalty.

Nottingham Forest were at the races straight away. Their pressing was intense and high up the pitch even before Furlong’s red card. West Brom could not deal with the pressure when trying to play out from the back, and eventually, they were reduced to booting the ball towards Andy Carroll and hoping he would do something special. West Brom’s defensive setup on corners was disappointing, especially for a defensive-minded manager like Steve Bruce. Forest are performing well under Steve Cooper, and they are in an excellent position for a playoff place.