Serie A 2021/22: How Napoli and Roma both looked to exploit space in the Derby de Sole – tactical analysis

Monday night’s 1-1 draw between Napoli and Roma in the Derby del Sole was the result neither side hoped for.

Roma came into the game full of confidence having lost only once in nine Serie A games and overturning a first-leg defeat to Bodo/glimt to qualify for the Europa Conference League Semi-Final. With Juventus dropping points in their draw against Bologna on Saturday. The Derby del Sole presented a fantastic opportunity for the Giallorossi to close the gap to just three points in the race for the final Champions Leagues qualifying place

Napoli needed the three points to maintain their title challenge as both Inter and Milan had sealed victories over the weekend. With last weekend’s disappointing defeat to Fiorentina and the added pressure of Inter still having one game in hand. A victory would in this game have presented a huge confidence boost going into what is a favourable run of fixtures for the Partenopei.

This tactical analysis provides an examination of the key tactics deployed by both Napoli and Roma in a match that both sides could have won. We will focus on the attacking tactics and strategy that Jose Mourinho and Luciano Spalletti both implemented in their attempt to win the game. 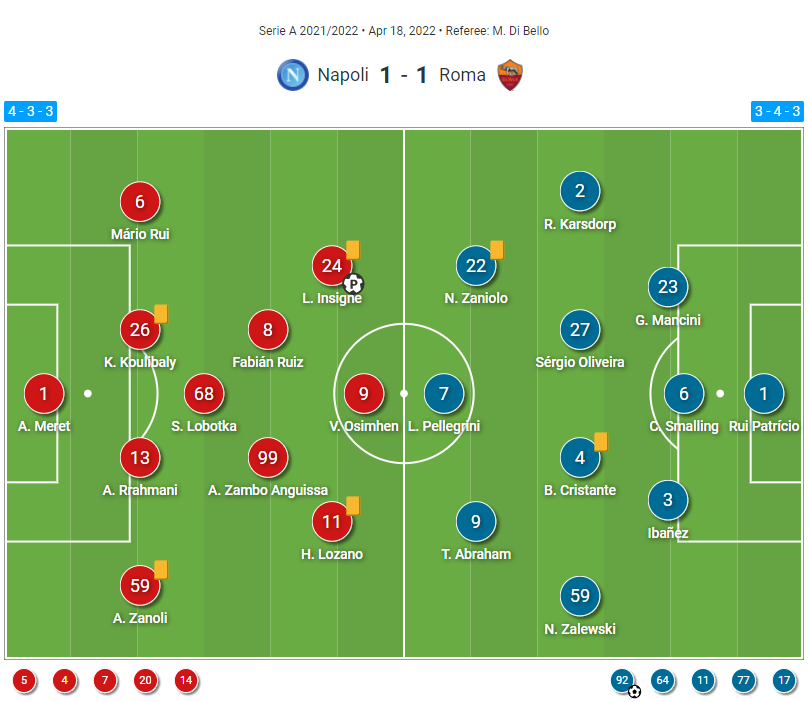 Napoli approached the game with their usual 4-3-3. With Anguissa returning to the team it gave Napoli more defensive structure when they were out of possession, enabling the team to transition between pressing high in a 4-1-4-1 or sitting in a medium block with a double pivot of Anguissa and Lobotka. 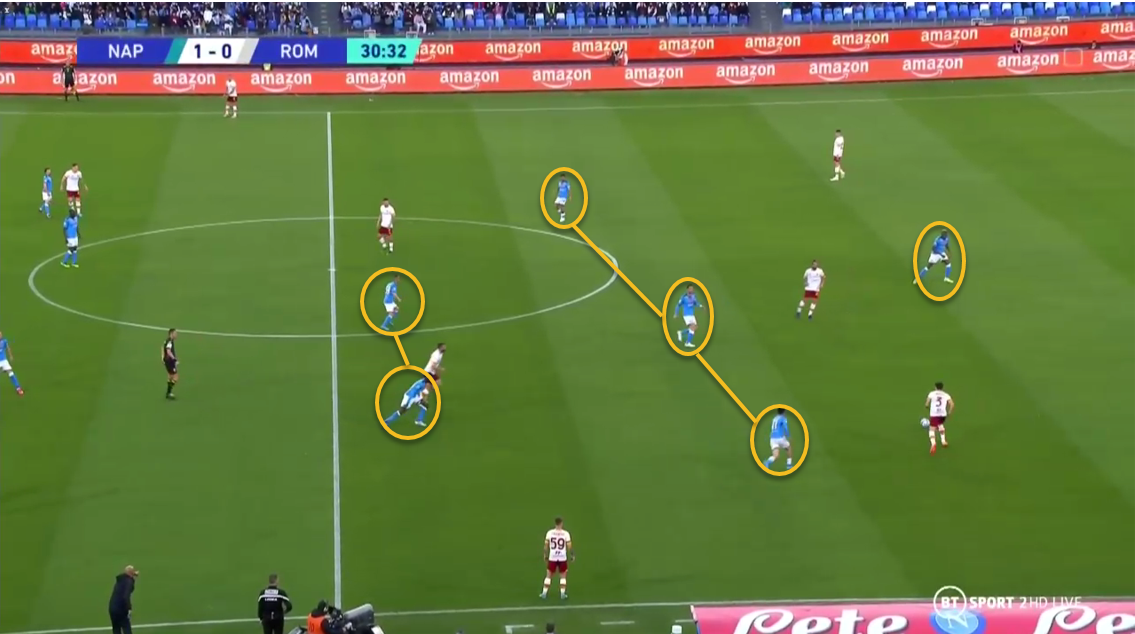 Roma set up with Jose Mourinho’s accustomed 3-4-3 formation that he has preferred to use since the first half of the season. His 3-4-3 operates differently depending on his team selection. Sometimes it will be a 3-4-1-2 it can be a 3-4-2-1. Mourinho prefers this formation because of the defensive structure it provides out of possession. Roma has been sitting a 5-4-1 or 5-3-2 defensive block during various stages this season. This gave Napoli the chance to double up on Lorenzo Pellegrini who was operating in between the lines for Roma and gave them an extra man during their build-up. 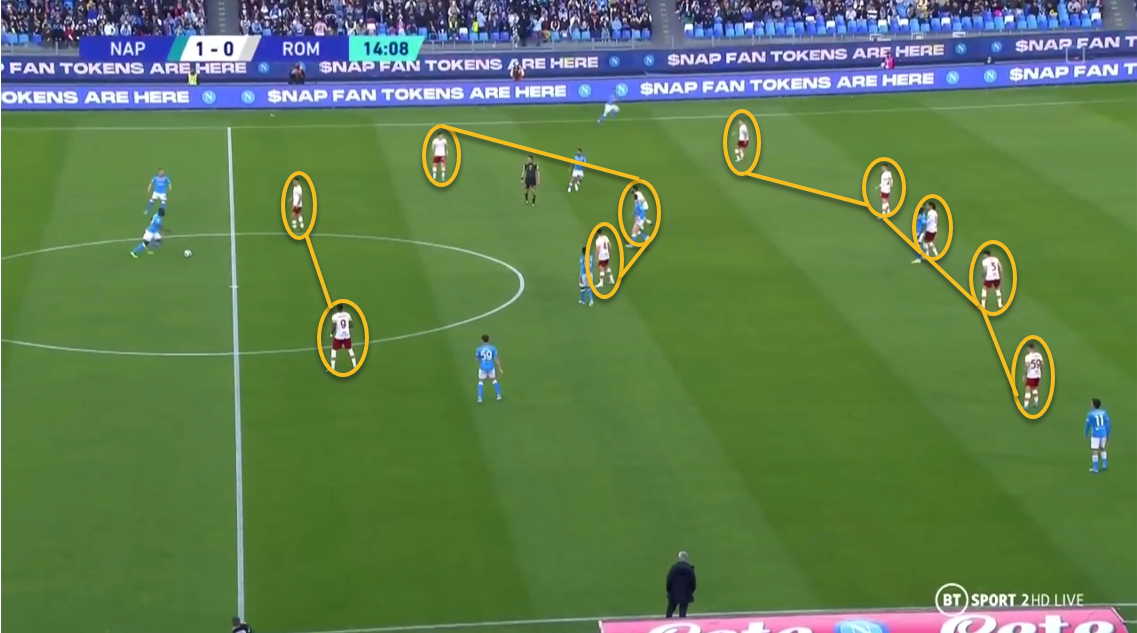 Against Bodo Glimt in the previous game, the shape resembled more of a 3-5-1-1 with Nicolo Zaniolo playing behind Tammy Abraham. For this game, Zaniolo pushed up alongside Abraham and Pellegrini played behind them in a 3-4-1-2.

The only change Roma made to the starting line-up was Sergio Oliveira replacing Henrikh Mkhitaryan. Like the decision Luciano Spalletti made with Anguissa, Mourinho has decided to bring Olivera in for his ability to put pressure on and tackle the opponents.

It appeared throughout this analysis that Jose Mourinho and Luciano Spalletti had identified similar weaknesses in each other’s team. As both Napoli and Roma attacked with similar tactics. Both teams looked to create and exploit the space behind each of their defensive lines.

Luciano Spalletti had sent Napoli out with a clear tactic of looking to create space by stretching Roma’s defence. The aim of this was to stop Roma from defending with a five-man defensive line and only allowing Napoli to play in front of them.

Napoli did not allow Roma to settle into their defensive shape as they kept catching Roma’s wingbacks Rick Karsdorp and Nicola Zalewski out of position. Napoli was good at manipulating the half-spaces through Lorenzo Insigne’s clever movement. Insigne kept making lateral movements from the left channel into the left half-space and vice versa. Every time he would do this Roma’s wingback Rick Karsdorp kept becoming drawn to the wrong position. This opened big spaces right across Roma’s defence.

These images show the space that Insigne’s movement creates when Napoli works the ball down Roma’s left-hand side and behind their defence. The first image shows his position after he moves from the half-space to the outside channel. 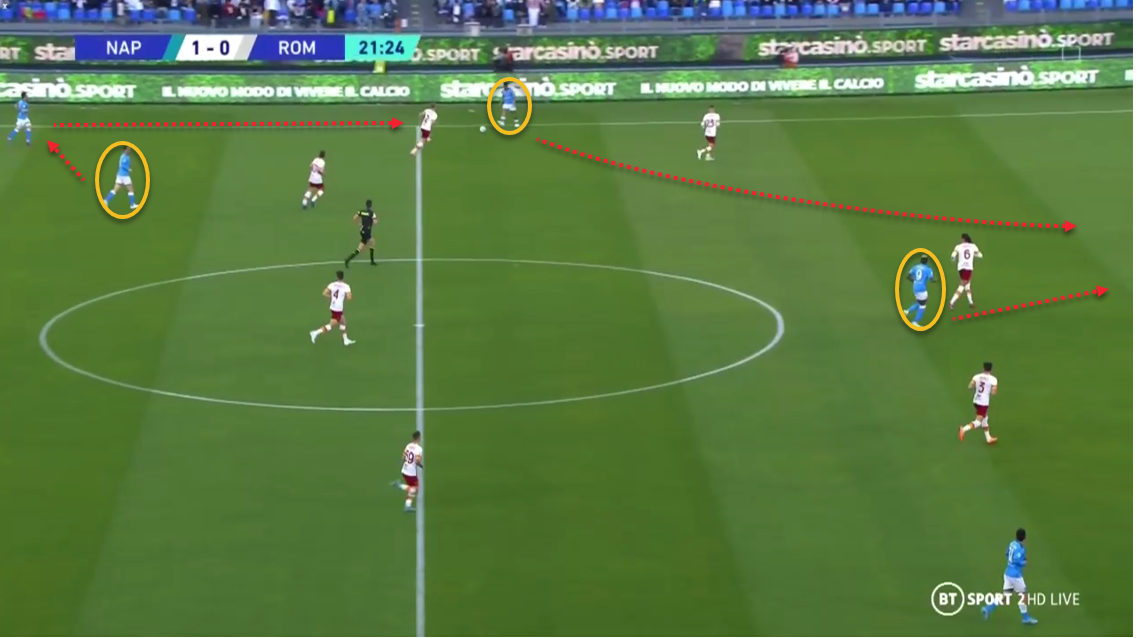 The second image shows his position after he moves from the outside channel into the half-space. 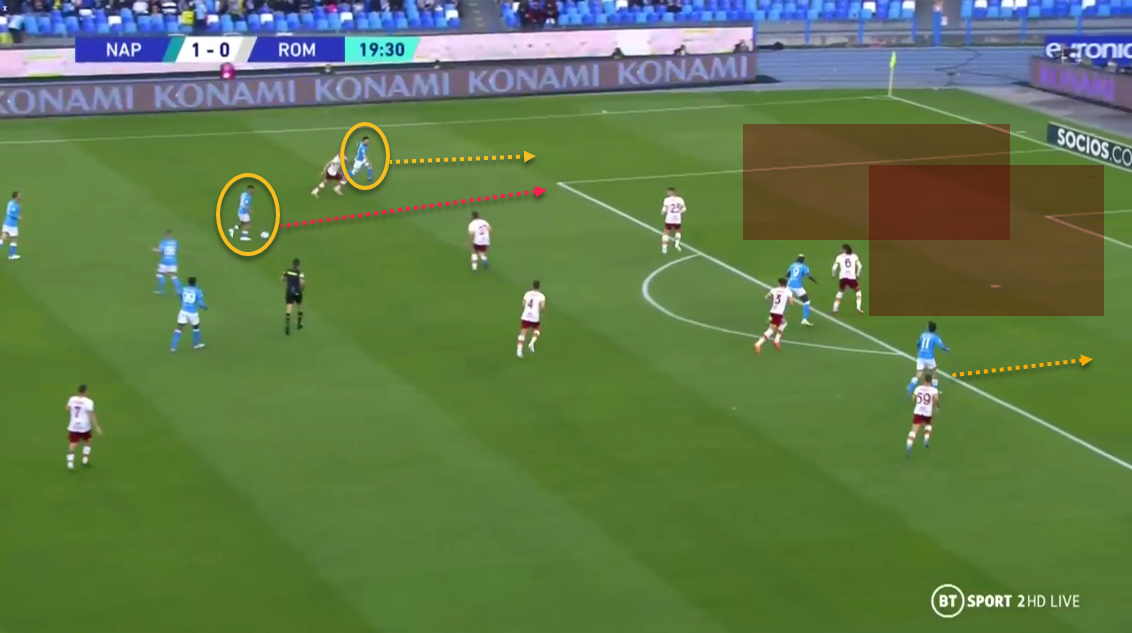 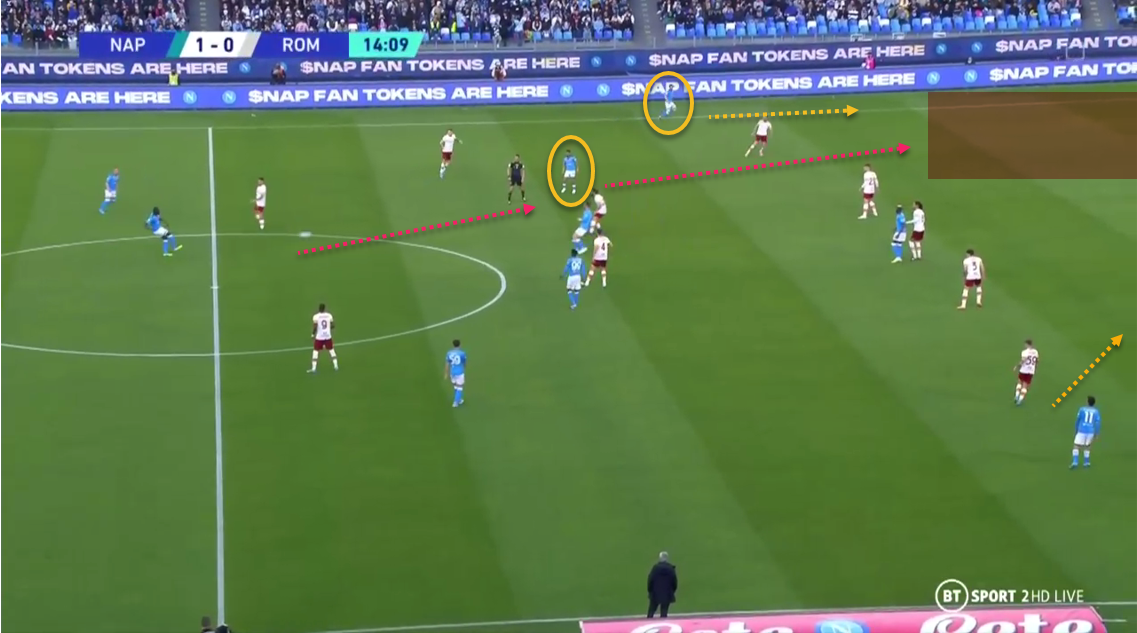 All examples show how the space has opened between Roma’s defenders Karsdorp and Gianluca Mancini.

It was this approach that created the opportunity that led to Napoli winning their penalty. Hirving Lozano was having similar success on the right-hand side. Lozano kept getting in behind Nicola Zalewski and isolating Roma’s left centre back Ibanez for 1v1 situations. 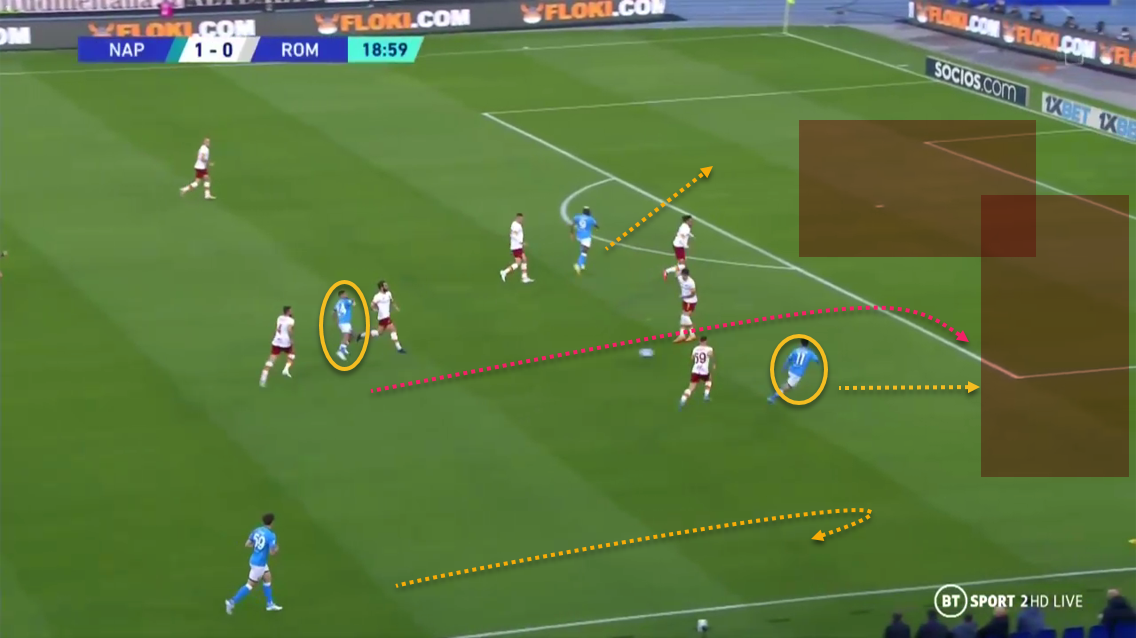 Jose Mourinho implemented a similar approach. He wanted to create space to attack Napoli in behind their defensive line. Up until recently, Napoli held the best defensive record in Serie A conceding the least number of goals. When defending their half of the pitch Napoli defend with a narrow and compact defensive block. Their back four is difficult to penetrate.

As much as Napoli was the better team in their first half you could see tactics that Roma was using were having success. They managed to get into good positions but lacked the decisiveness in crossing positions to threaten Napoli.

Roma’s wingbacks did not push high and join Roma’s line of attack. Instead, they remained neutral and functioned as a decoy to break Napoli’s backline. Rick Karsdorp attracts two Napoli players in this image. By doing this Nicolo Zaniolo quickly identifies the space Napoli’s left-back has left down Roma’s right-hand side.

This movement by Zaniolo immediately pulls Koulibaly from the centre and which creates more space for Lorenzo Pellegrini to attack.

The movement from Roma’s attacking trio Tammy, Abraham Nicolo Zaniolo, and Lorenzo Pellegrini was causing problems for Napoli. They were creating space to exploit right across Napoli’s defensive line. 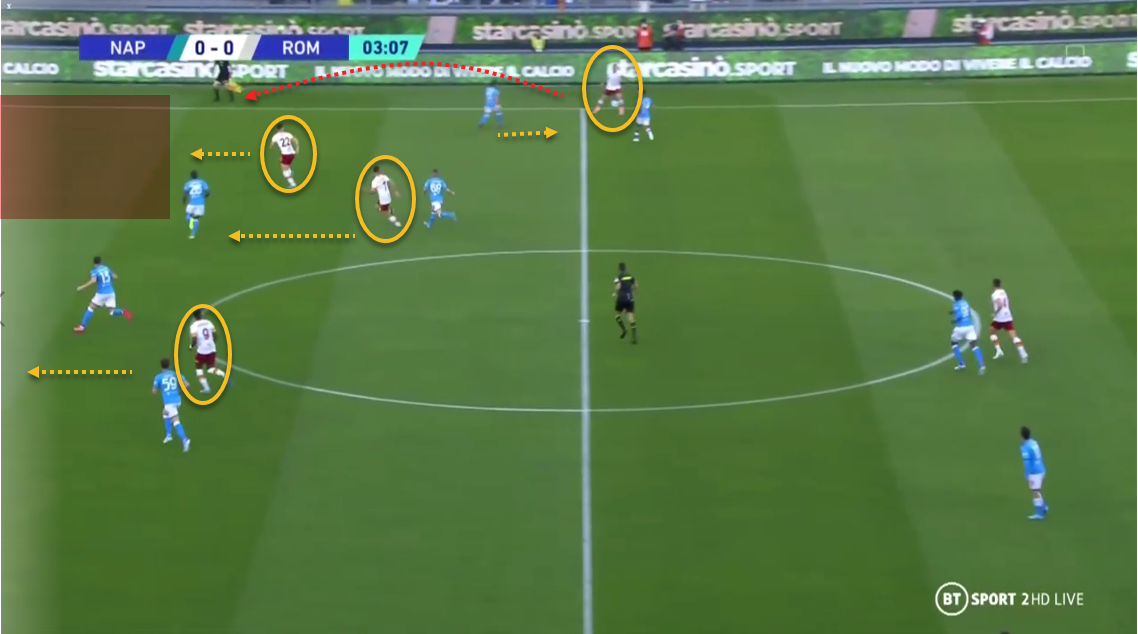 Roma was creating space differently from Napoli. Whereas Napoli was exploiting the space with fluid movement and variety in attack. Roma’s attacking play was more structured. As mentioned earlier Roma would use the wingbacks as a decoy to attract Napoli’s full-backs to the ball out wide and then look to play the ball in behind.

This would happen centrally as well. Tammy Abraham would function as the decoy. Roma would play the ball into him hoping that Zaniolo and Pellegrini would look to run in behind. 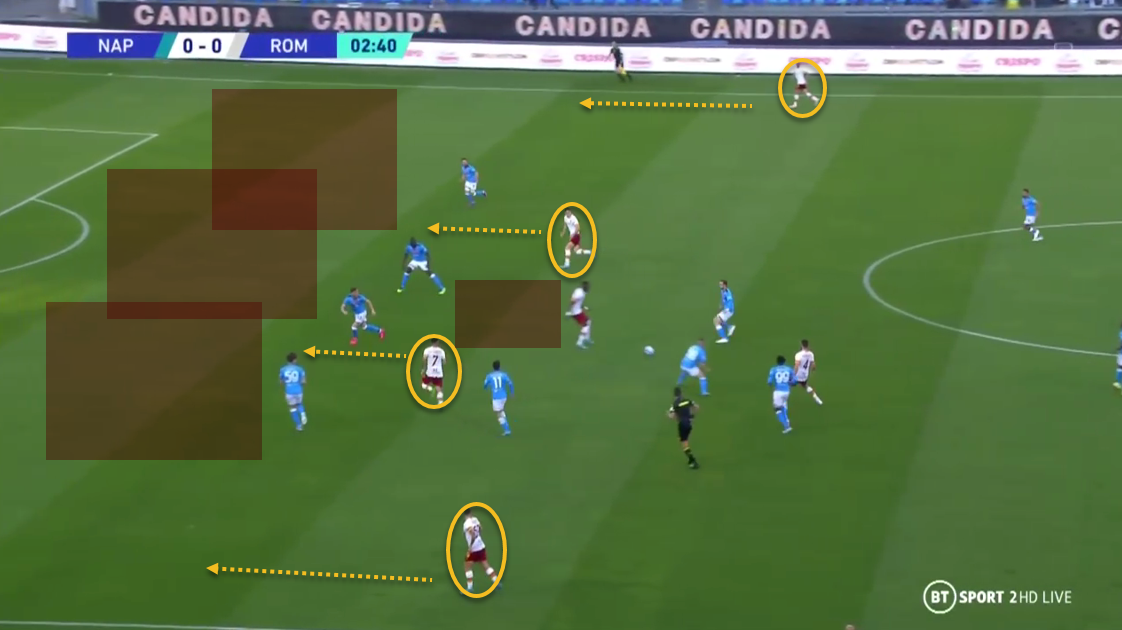 The problem with this was that Roma’s play became too predictable. Once Napoli started winning the ball back higher up the pitch Roma’s front three became isolated.

Roma was better in the second half. Jose Mourinho did not change the system in any way they just focused more on playing out wide and crossing the ball. The tactics of trying to exploit the space behind Napoli’s defence were still evident but in the second half. The Giallorossi were a lot more purposeful with their play and were quicker in transition. They looked to support the wide players and provide them with more options.

This affected Napoli’s attack as Lorenzo Insigne and Hirving Lozano had to support their fullbacks in the wide areas and therefore played deeper in the second half. This was leaving Victor Osimhen isolated

This passage of play was a result of a quick transition. Roma won the ball immediately after a Napoli clearance. The ball is played straight to Rick Karsdorp who quickly plays a cross behind Napoli’s defence.

You can see space behind Napoli’s defence. 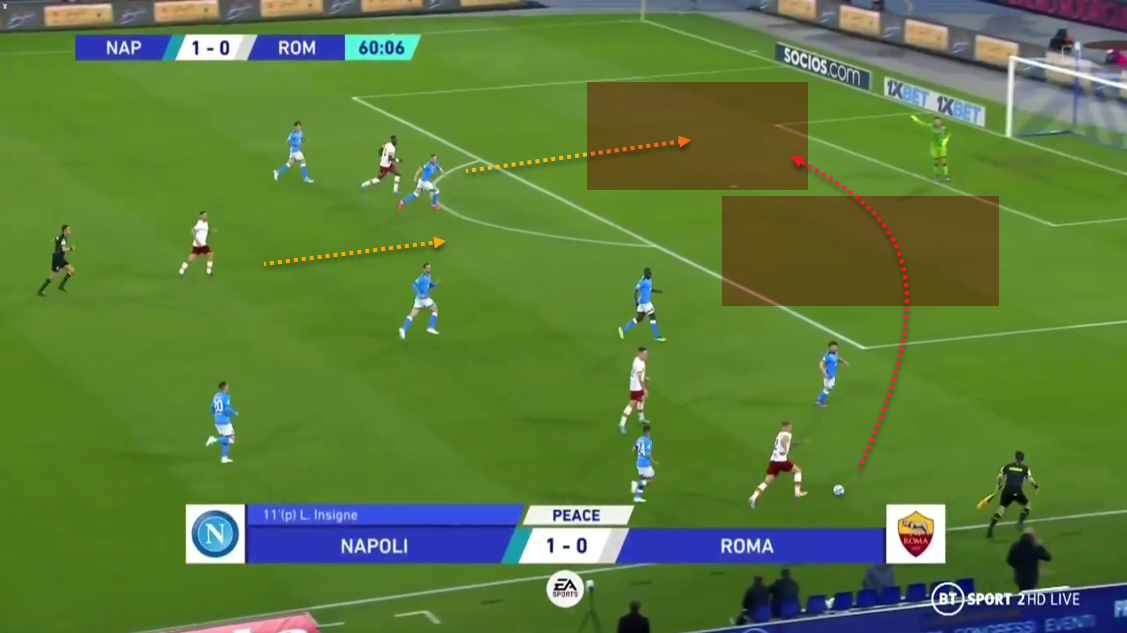 This is how Roma managed to create the equalising goal. They attacked the space down the right-hand channel. A quick ball from Karsdorp behind Rui drags Koulibaly out wide. The moment this happens there is a knock-on effect right across the penalty area. Pellegrini plays the ball immediately into the penalty area. at this point, Afena-Gyan and Abraham attack the space vacated by Koulibaly and Napoli is then underloaded on the left-hand side. Stephen El Shaarawy who is off-screen attacks the penalty area and scores. 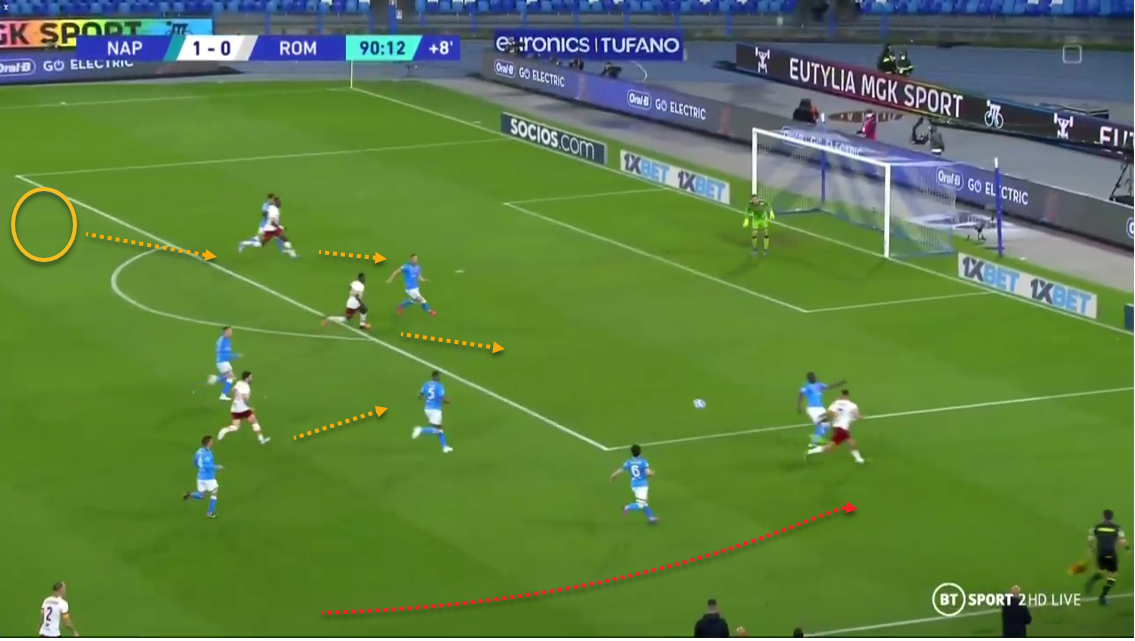 In this analysis, we have shown how both Jose Mourinho and Luciano Spalletti looked to implement similar tactics within their approach.

It would be easy to say that both teams cancelled each other out in this match. However, this certainly wasn’t the case. It was an open game that both teams tried to win. Napoli and Roma were just unable to take full advantage of the areas that they both identified. Both managers will consider this as two points dropped.