Orlando Pride lost 2-4 when they hosted North Carolina Courage at the Exploria Stadium for the fifth fixture of NWSL Challenge Cup 2022’s Group A. Not only does the result poses a lot of question marks on Orlando Pride’s defensive performance but the fact that they conceded three goals in just eight minutes is worrying. Orlando Pride are actually at the bottom of Group A in terms of standings and they will have to fix a lot of things in their performances in order to be able to compete seriously during the NWSL season.

On the other side, North Carolina Courage seem to be on form from an attacking perspective as they have plenty of weapons to use and can diversify their attacking actions so often to create goalscoring chances and they succeeded in doing so against Orlando Pride. Nevertheless, they will have to work on conceding fewer goals by improving their defensive organisation to avoid being put in delicate situations despite being better from an attacking perspective. What is excellent for North Carolina Courage is that they didn’t lose any game during this NWSL Challenge Cup 2022 so far while they won three times and made two draws. This confirms that North Carolina Courage are in a good shape this season and that they have all that is needed to battle for the title.

In this tactical analysis article, we will focus on Orlando Pride’s recurrent defensive errors while considering what needs to be improved from an attacking perspective. The analysis will also tackle North Carolina Courage’s strengths and possible improvements.

Orlando Pride started the match with a 4-2-3-1 formation using ex-Arsenal and West Ham Anna Moorhouse as a goalkeeper, Celia Jiménez, Megan Oyster, Toni Pressley and Courtney Petersen in defence knowing that former Manchester United and Liverpool Amy Turner started as a sub later in the match, former Atletico Madrid’s Kylie Strom and Meggie Dougherty Howard as central midfielders, Darian Jenkins and Erika Tymrak on the wings while Mikayla Cluff played as an advanced playmaker behind the striker Leah Pruitt.

North Carolina Courage opted for the 4-4-2 formation with Katelyn Rowland as a goalkeeper, Merritt Mathias, Kaleigh Kurtz, Abby Erceg and Carson Pickett in defence, Meredith Speck and Denise O’Sullivan as central midfielders, Debinha and Kiara Pickett on both wings while both Taylor Smith and Jaelene Hinkle were the team’s two strikers. 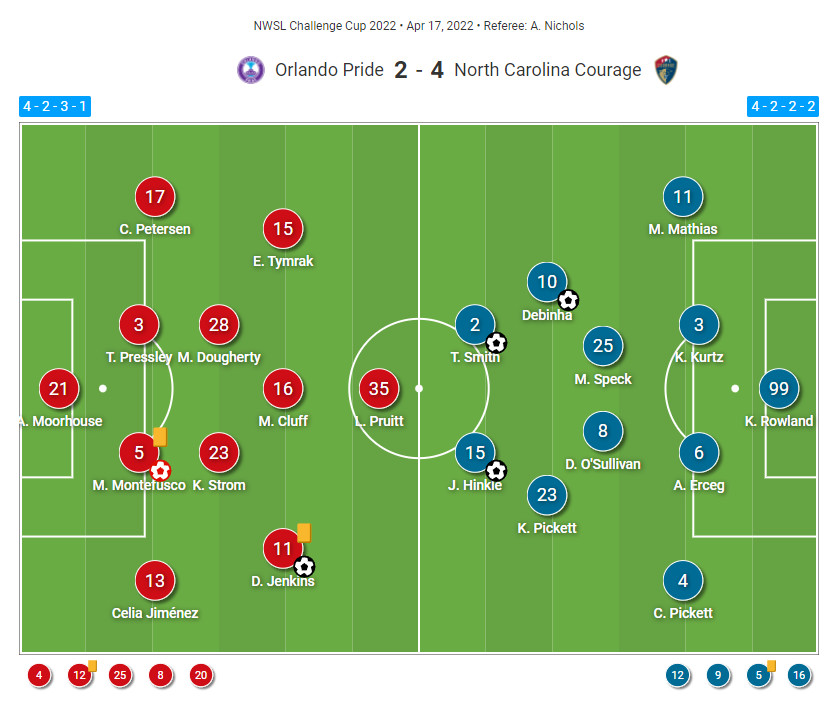 Orlando Pride started this match in the worst possible way by conceding three goals in just eight minutes, allowing their opponent to have a large advantage early in the game and be able to control everything without making an extra effort. This scenario affected Orlando Pride on a psychological level and made the mission easier for North Carolina Courage despite Orlando Pride’s attacking attempts and their two scored goals.

In fact, Orlando Pride conceded 19 shots in this match with 8 shots on target. And although they won 52,94% defensive duels and 60% in aerial duels, conceding a lot of space to North Carolina Courage prevented Orlando Pride from being solid at the back on most occasions.

During the first North Carolina Courage goal action, Orlando Pride defenders left too much space for Mathias to cross with ease and opted for defending narrowly inside the box. However, defending narrowly or widely cannot be efficient if marking is not good enough. As you can see in the picture, North Carolina Courage’s striker was marked by two defenders yet none of them were able to clear the ball away. And what is worse is that the goal was scored by Oyster against her own goal when she was about to clear the ball. This explains the confusion and the lack of confidence and stability in Orlando Pride’s defence. This can be sensed by their opponents who would exploit this lack of organisation and attack with more numbers and with more attempts, exactly like North Carolina Courage did in this part of the match. 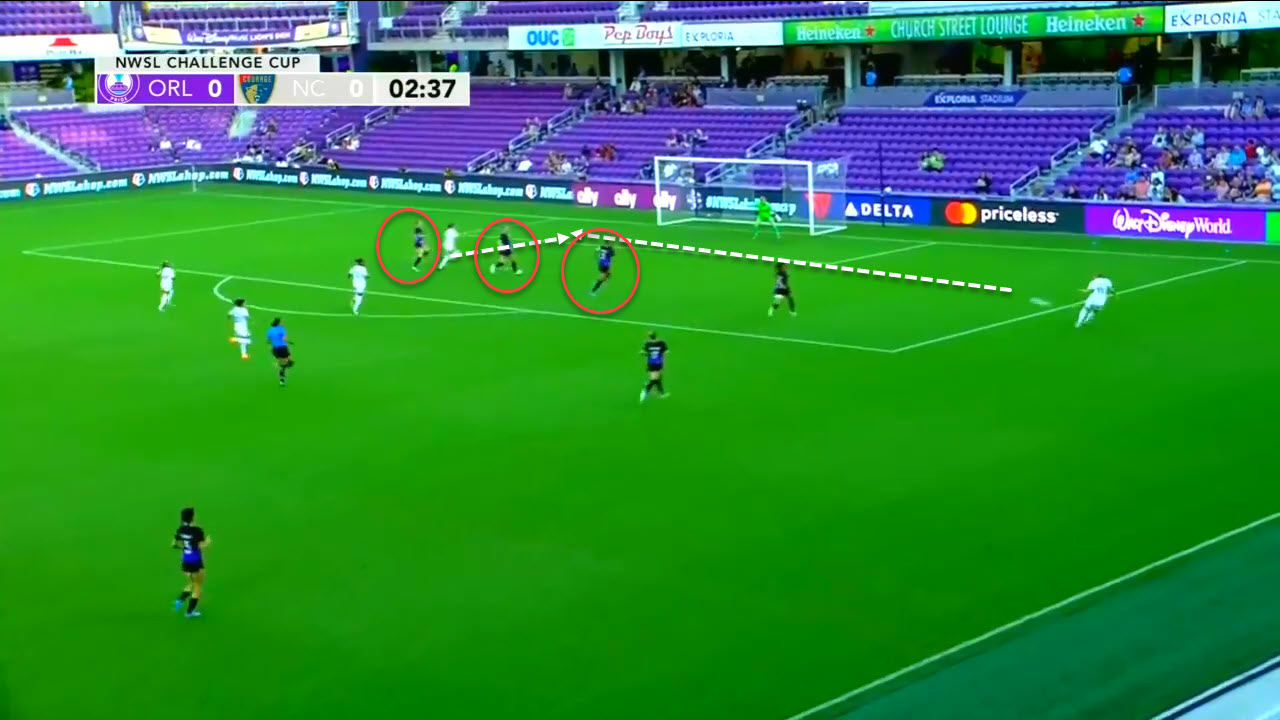 Moreover, the problem with Orlando Pride’s defence is that they didn’t learn from their initial mistake and allowed North Carolina Courage to repeat a similar attacking pattern but this time they were not even able to intercept the cross or prevent Hinkle from scoring the second goal of the match. Orlando Pride should have worked a lot more on marking since they know that North Carolina Courage can be extremely dangerous from the right wing and inside the box. 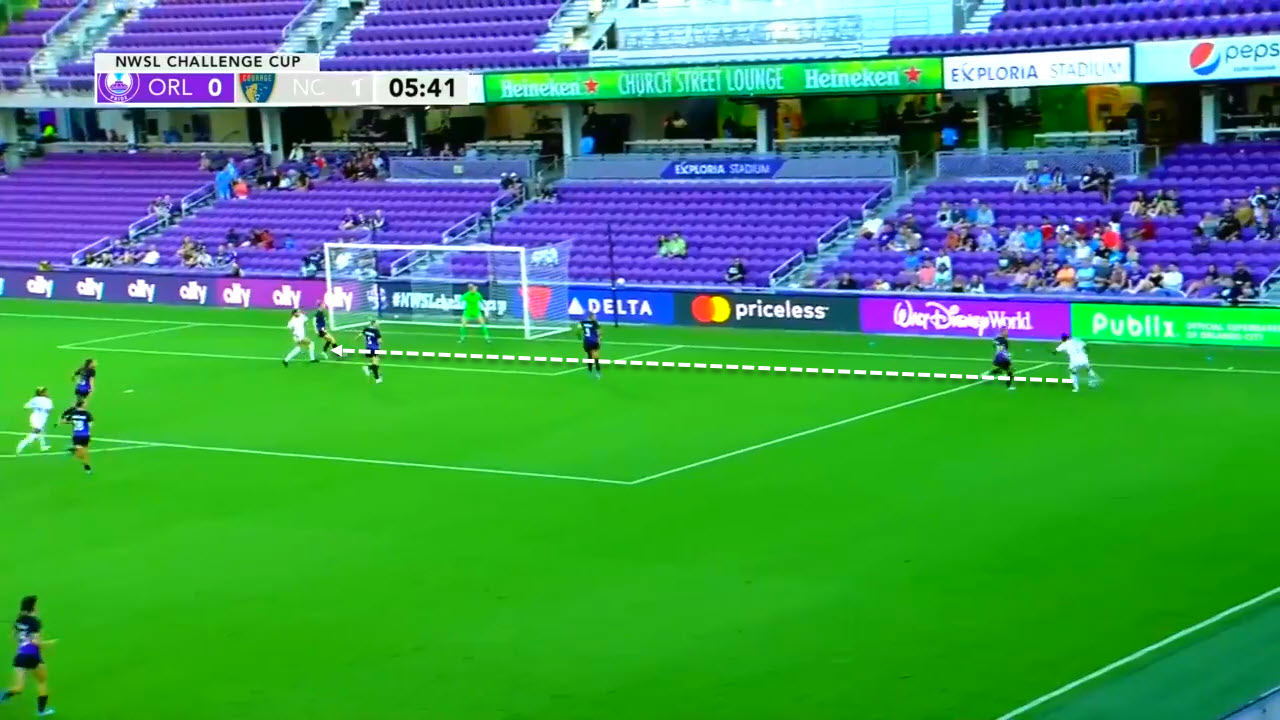 After a few minutes, North Carolina Courage had another great opportunity for scoring when Smith was served on the right-wing while being completely unmarked. In reality, Orlando Pride defenders were focused on the holder of the ball and forgot to cover the right-wing in order to prevent possible penetrations. Moreover, defenders are not the only ones to blame for this action since midfielders are required to cover in such cases and help or replace full-backs whenever needed. This wasn’t the case here for Orlando Pride, which means that midfielders are not applying their duties correctly in terms of defending. This midfielders’ advancement can also be related to head coach instructions and in that case, Amanda Cromwell would be the one to blame, even though giving such instructions in dangerous situations like these is unlikely. 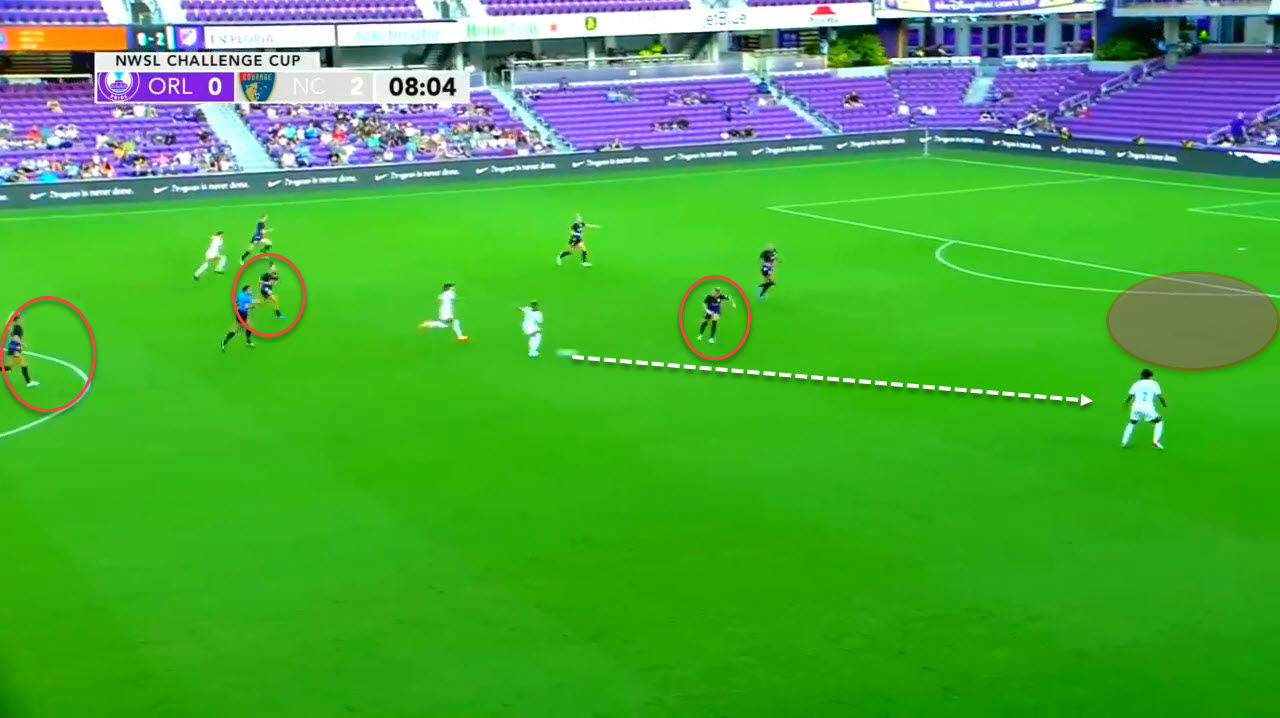 In fact, Jenkins was the player who kept her team a little bit in the game as she was able to score two goals which could have been crucial if Orlando Pride believed more in their chances to equalise. Her first goal was scored following a wrong pass from a North Carolina Courage defender which was collected and given to Jenkins who didn’t think too much and shot the ball towards the left angle with success. 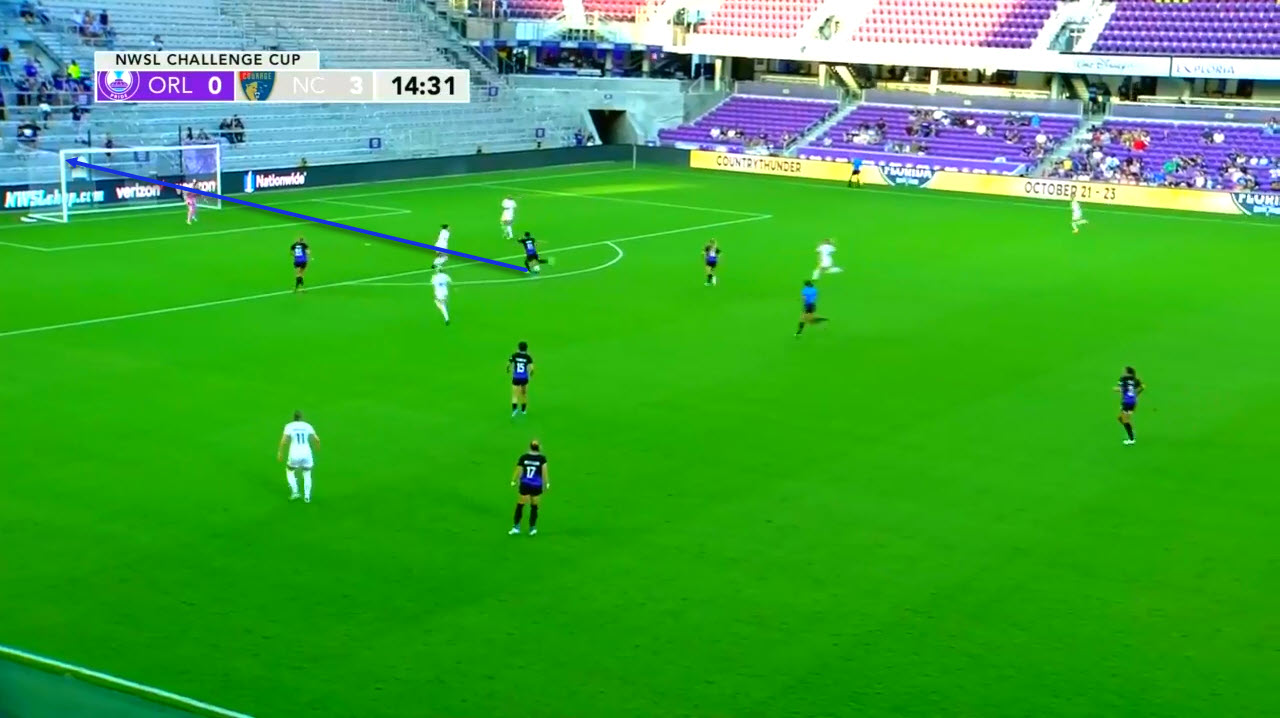 After that, North Carolina Courage made some attempts through Debinha’s solo efforts and a number of crosses from both the right and the left wing which were not finished successfully. But at the same time, it was clear that Orlando Pride were boosted by their first goal and wanted to make a solid reaction by trying to score goals. They were successful in doing so in an action that resembles to North Carolina Courage’s first two goals. It was an attack that started from the right-wing with an accurate cross by Jiménez towards the far post where Kerry Abello gave an assist using her head to Jenkins who executed a successful half-volley with her left foot, and the ball went inside the net. 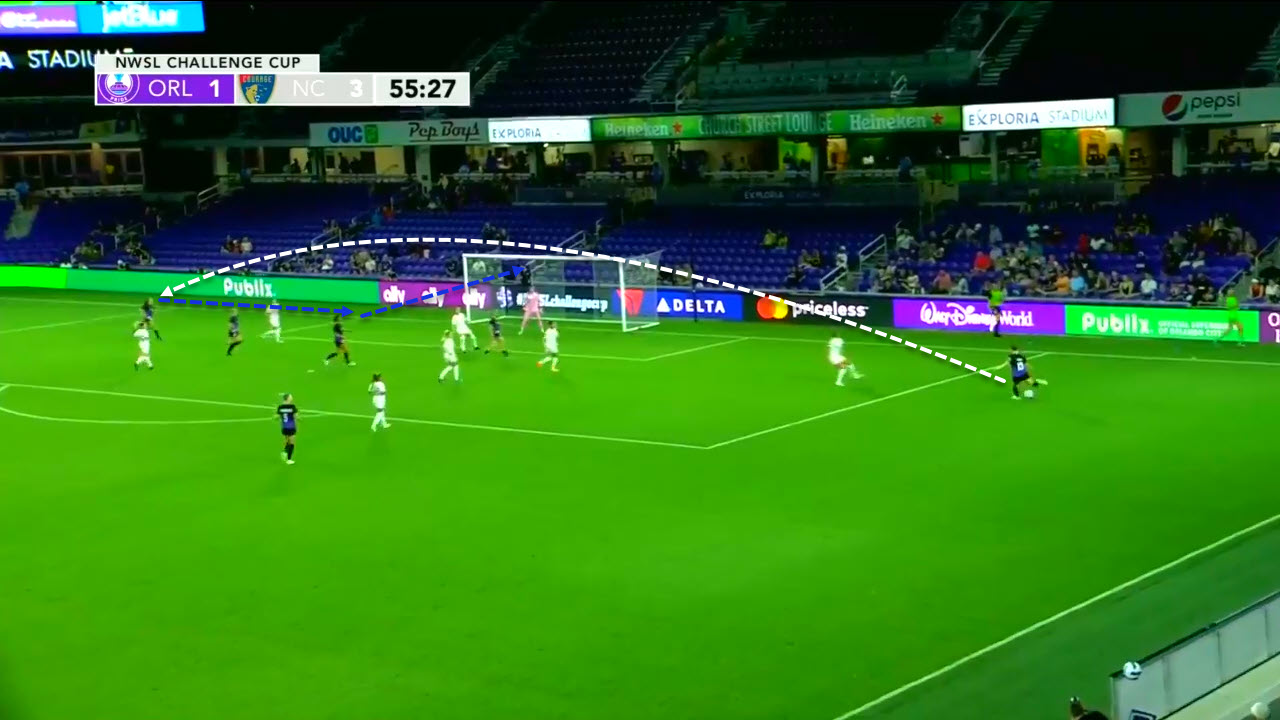 Following their second goal, Orlando Pride weren’t able to create numerous chances as they looked jaded while North Carolina Courage knew how to conserve their win while making sure to know lose a lot of energy. They confirmed their “superiority” at the 88th minute with a fourth goal from Debinha who ended Orlando Pride’s comeback chances once and for all. It was a difficult goal scored with a lot of technique from the Brazilian who received the ball with her back towards the goal, then, she was able to protect the ball, turn and immediately shoot with power towards the bottom-left corner with success. 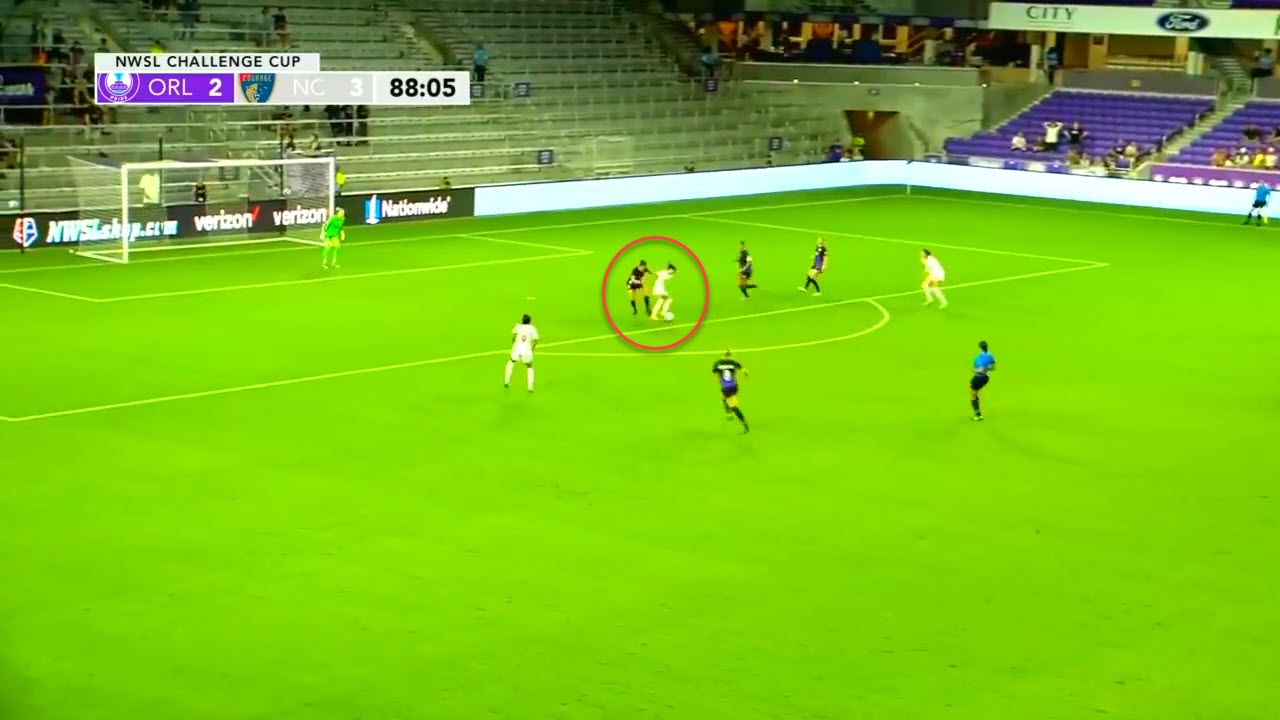 Orlando Pride will have to learn from the mistakes committed during this match especially from a defensive perspective. Plenty of things need to be fixed in terms of their defensive organisation and this concerns all the players not only the defenders given that the whole team didn’t seem to defend well and players didn’t really cover for each other on some occasions. A lot of training needs to be done to fix these issues prior to the start of the NWSL. But at the same time, Orlando Pride’s attacking performance was not that bad since they scored two goals and showed that they have the quality needed to do better in the future if they continue improving this aspect as well.

For North Carolina Courage, this win was fundamental to boost the players’ confidence and make them eager to more wins given that they were excellent from an attacking perspective. Yet, they have to be more focused in defence and avoid committing concentration mistakes such as the one that caused the first Orlando Pride goal.